Stark Future says it was born to challenge and inspire the motorcycle industry to sustainability. The company’s first serial production model – the Stark VARG motocross bike – will hope to prove that electric technology is superior to petrol equivalents.

In order to outperform traditional technology, the Stark VARG has been developed from the ground up, building the power train and chassis to work perfectly together and optimizing every component for its purpose. It is physical proof, Stark Future claims that an electric motocross bike can outperform combustion-engine equivalents in every single way. 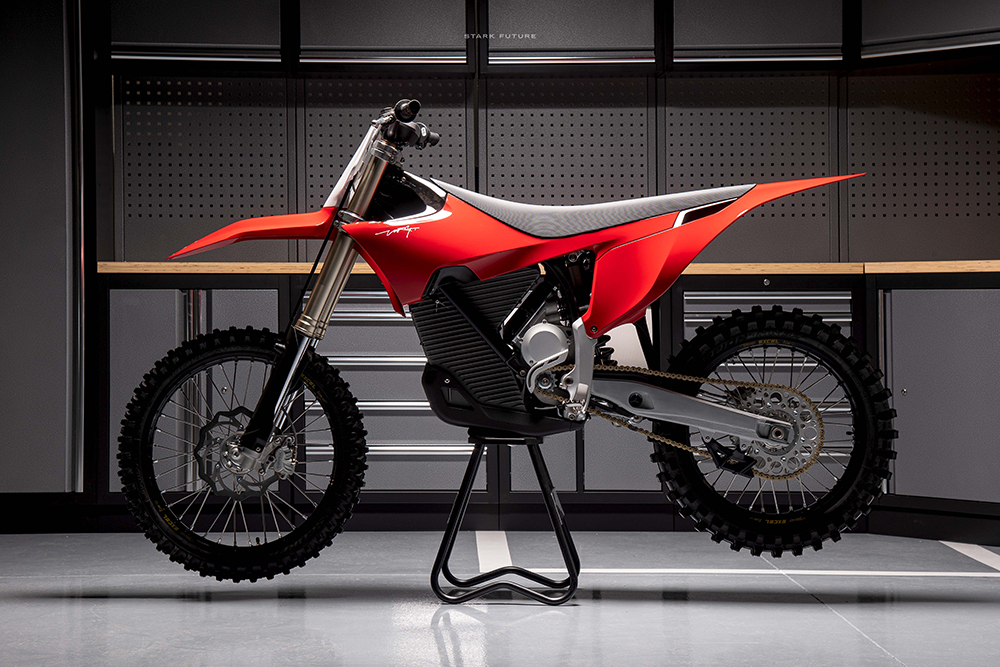 How does the Stark VARG (Swedish for ‘strong wolf’) mark the difference?

The VARG has been in development for over two years and Stark claim that every single component has been carefully examined and cross-compared for utmost performance and potential. The VARG boasts quick charging time and unbeatable durability (offering a full ‘moto’ at Grand Prix-like intensity or up to 6 hours of easy trail riding with a 1-2 hour recharge) and the absence of emissions and noise. 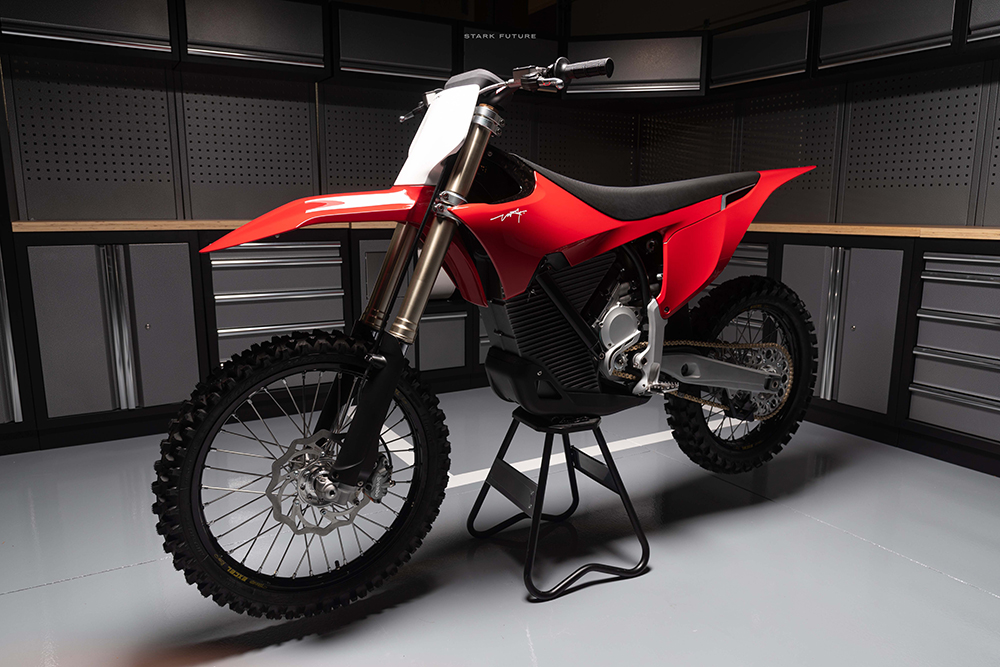 With the Stark Future App – contained on the waterproof and shock resistant smartphone/dash, held in place by a new robust fixture – the bike’s power curve, engine-braking, traction control and virtual flywheel weight can be tuned in a few seconds and through as many as 100 ride ‘modes’.

The silent heart of the Stark VARG is the prized engine and powertrain, providing 80hp – 30% more than any 450 – and with double the amount of torque. The drivetrain is surrounded by Stark’s production battery system which is one of the most compact and ‘energy dense’ in the world, boasting 6kWh of capacity at less than 32kg. The powerplant has been forged with advanced tech and ideas, such as the patent-pending magnesium honeycomb casing, ‘slippery-fingers’ cell holders, a pressure relief system and a one-sided powerboard configuring the battery cells. The VARG’s ‘flying V’ system connects every cell directly to the tough, waterproof casing. This brings high conductivity to the air-cooled structure. The result is a very even and regular battery temperature that removes unnecessary weight for water or vapour cooling. The range from a full charge is similar to a 450 with a full tank of gas. 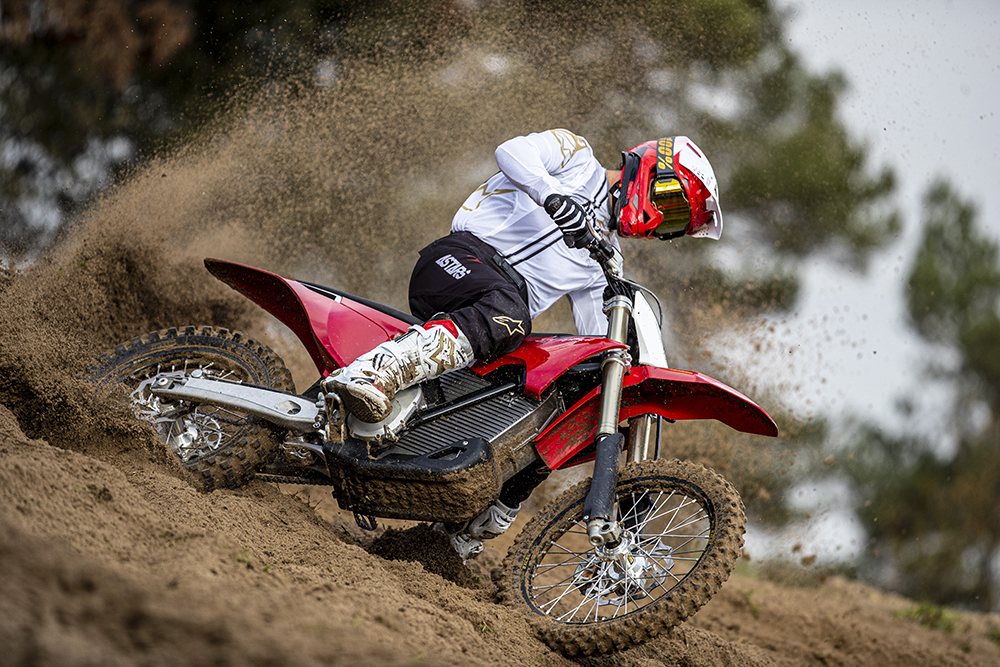 Low weight is key to the Stark VARG’s segment competitive handling. At 110kg the bike sets the best power-to-weight ratio of any model in any dealership. The chassis architecture uses the engine as a structural component, allowing Stark Future to build the lightest motocross frame in the world. The composition of the frame (and carbon sub-section) brings the right blend of lateral, vertical and torsional flex and a lower centre-of-gravity placement to optimize the VARG’s output. Slim, sporty ergonomics (goodbye to airboxes, radiators and fuel tanks) and redesigned plastics, save weight and improve overall ergonimics. Japanese suspension experts KAYABA and Technical Touch need no introduction and the 310mm travel set-up can be tweaked between seven different stock settings depending on the size and bulk of the rider. 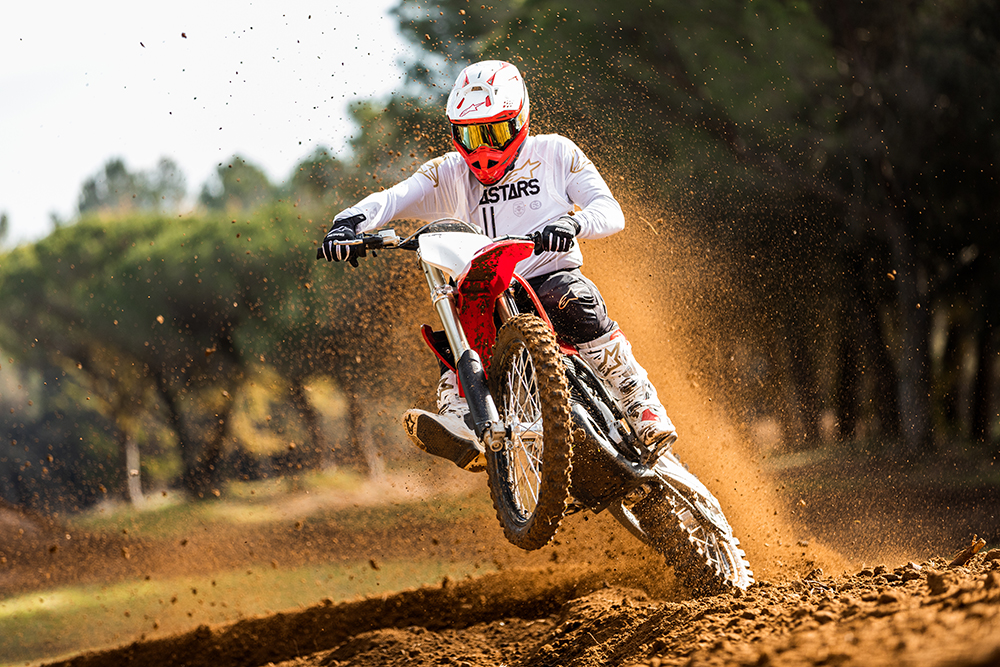 The Varg sports a patent-pending super-robust ‘floating’ dual compound skid plate that removes the need for a lower section of the frame and provides excellent protection. The wheels feature CNC-machined 6082 T6 aluminium hubs, 7050 T6 rims, and spokes made in Italy from high-grade steel and are fitted with Pirelli MX32 rubber. There’s is also plenty of fruity but purposeful bling like the innovative chain adjuster ‘click system’ (erasing the need for measurement) and the flush axle and bolt composition for more effective profiling and protection. Even the Stark VARG footpegs are special: the parts are cast from a special stainless steel alloy, 40% stronger than titanium or chromoly steel and are lighter than any motocross footpeg. The installation process is also simple as Stark has taken away the need for a lock pin. 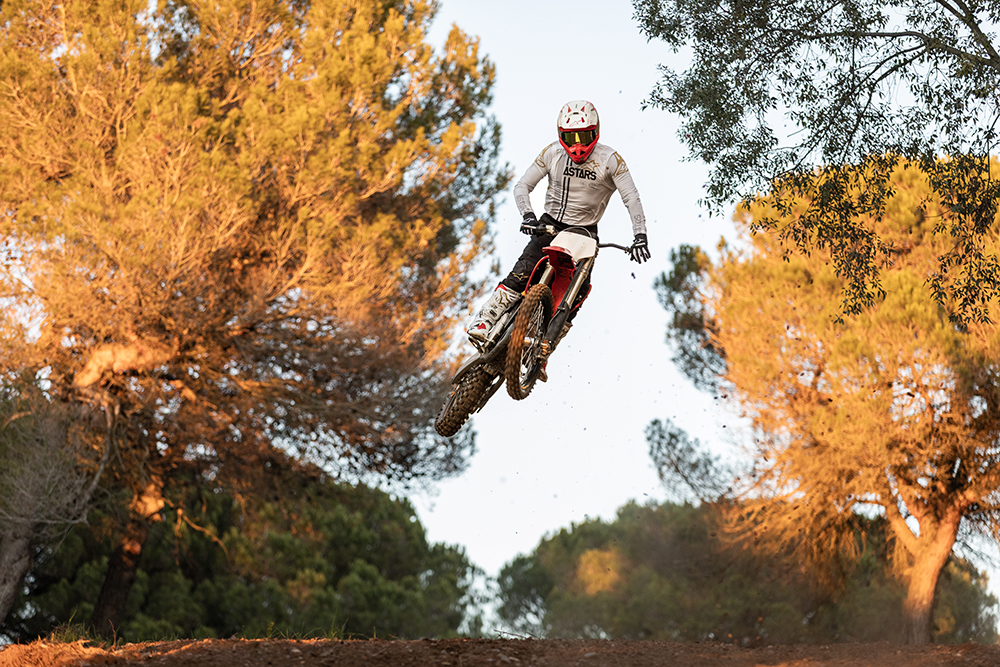 The industry has set their benchmarks for combustion-engined motorcycles and it focuses on minor incremental steps each year. Stark Future has blown this outdated and environmentally ‘unfriendly’ standard away from the track. The company want to take motocross ‘out of the rut’ and have analyzed and beaten every yardstick there is.

The Stark VARG is competitively priced, costing €11,900. The motorcycle can be ordered through the Stark Future website www.starkfuture.com or through select, participating dealerships. 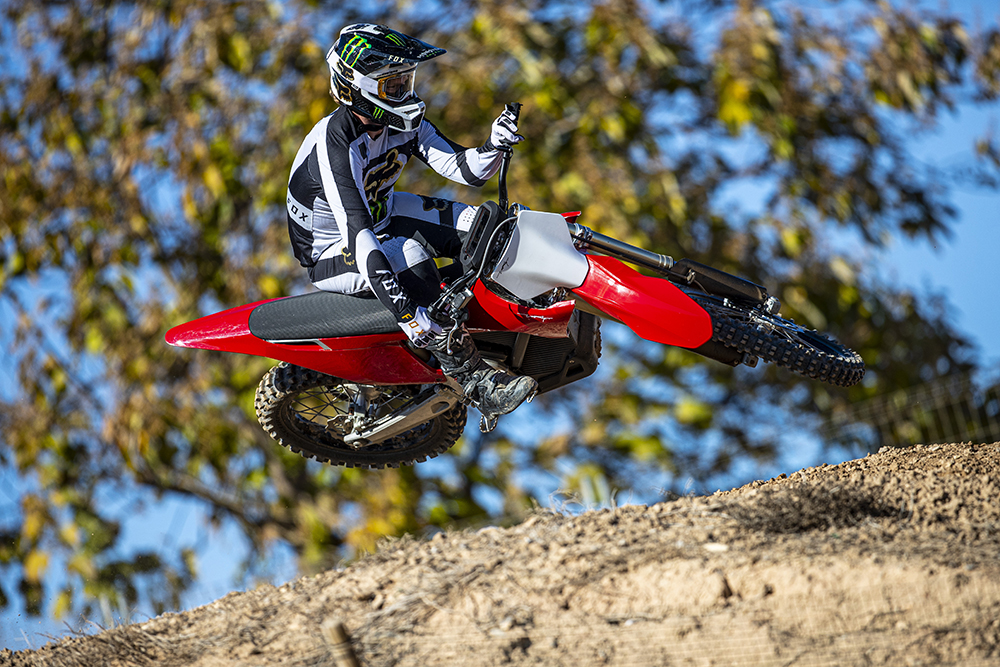 “It is a very proud moment for us to finally start talking and showing the Stark VARG,” says Anton Wass, Stark Future CEO and Co-Founder. “As motocross riders and fans, we knew that the sport was in a chronic state, and we are losing tracks in Europe every week. It felt like motocross was going backwards while the potential for innovation with electric mobility is going quickly forwards. Our motivation was born out of frustration with the scene and the need to contribute something that would help our world and our surroundings. It’s been a fantastic journey so far and it’s exciting to see how the Stark VARG had exceeded our expectations. From a business perspective, we also wanted to set the bar in motocross because it is the toughest challenge for material and technical ideas before we move on to produce a full range of on-and-off-road motorcycles. Riders are going to love the full potential of the Stark VARG and the amount of ‘clean’ and easy fun it provides. We aimed to produce something greener and better, and we think anyone trying the bike will agree that we reached our vision.” 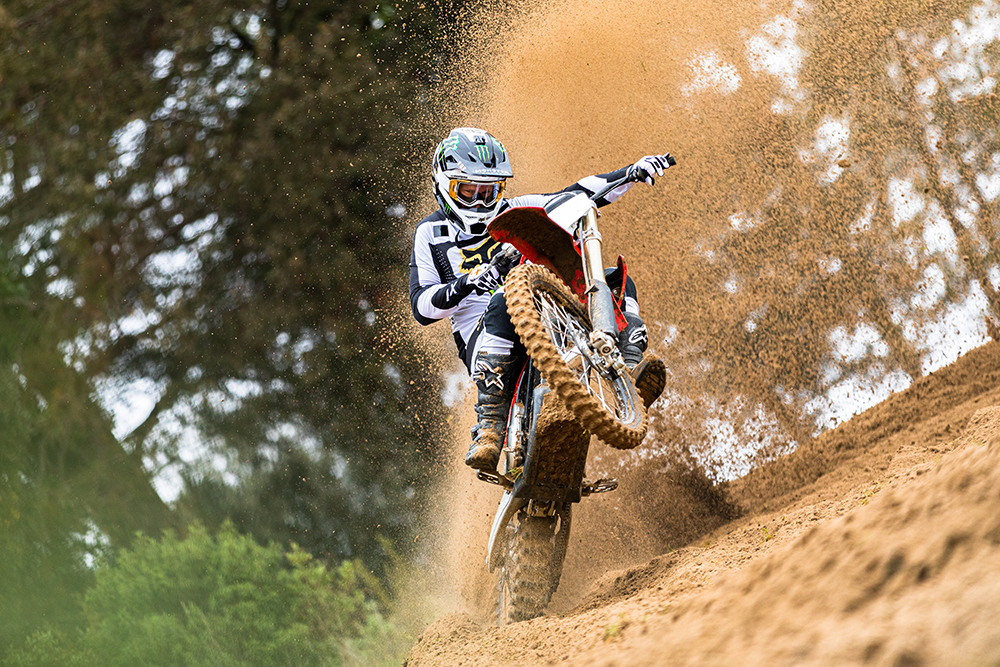 “When I first jumped on the Stark VARG it was a step into the unknown. The very first impression was from the outright performance; it was much more than I expected,” commented Testing Director and former World Champion and AMA Supercross race winner Sébastien Tortelli. “Suspension-wise, chassis-wise I immediately felt at home. This is a real motocross bike. I had to learn about the electric power and I was surprised of how fast I adapted and how fun it is to ride. We have done quite a lot of development work already. The chassis is balanced as well as nimble. The light weight means you can really move around it with ease and attack those jumps and sections. I feel awesome on the track and I can race with this bike, and this is what we are aiming for. It’s an amazing experience to ride in silence! You can hear the way the bike picks up traction, the impact of the stones and the jumps. It’s an amazing sensation.”

“First off, the Stark VARG is one of the most beautiful bikes I’ve seen!” said Stark Future ambassador and former AMA Supercross race winner Josh Hill. “It is probably the most responsive power I’ve ever felt on a bike. The designers have done an amazing job with the chassis and the ergonomics right out of the gate. There was very little to adjust. I also love the ‘one size fits all’ idea: someone with very little experience of a dirtbike can feel safe and have fun – especially compared with trying to get their head around a new 250 or 450 – but then the serious racers or free-riders can make it as explosive as they want. The possibilities with the Stark VARG are endless. Once you’ve ridden an electric bike then its unlike anything else.” 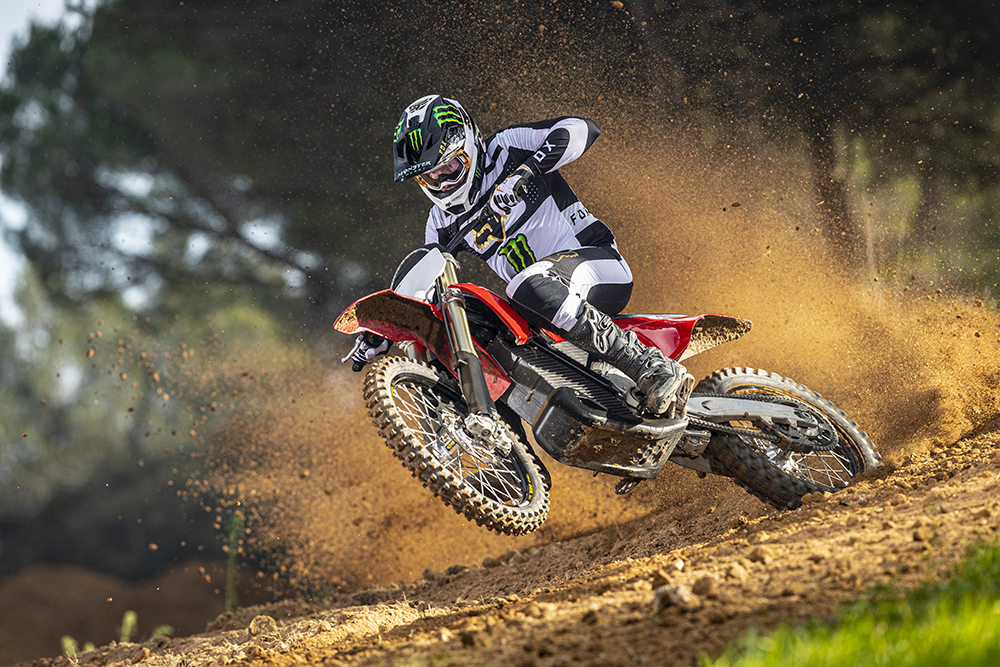 Stark Future is a multi-national company, established in 2019 with Swedish roots but located on the fringes of Barcelona. Making the most of Catalunya’s reputation as one of Europe’s off-road riding ‘hotspots’, Stark Future was able to construct a dedicated, passionate and knowledgeable team from the cream of both the motorcycle and power electronics industries. They rapidly started work on the first model of an ambitious catalogue of next-generation electric motorcycles. The Stark VARG is the result. The highly advanced technology has been dutifully evolved at the firm’s factory, where robotic assembly lines will produce the Stark VARG and forthcoming models to order. The Stark VARG itself is a strong definition of the company’s values. Stark Future want to challenge the norm to improve how things are done, search for the limit, adapt and set clear, smart and inspiring goals and, finally, deliver outstanding results. 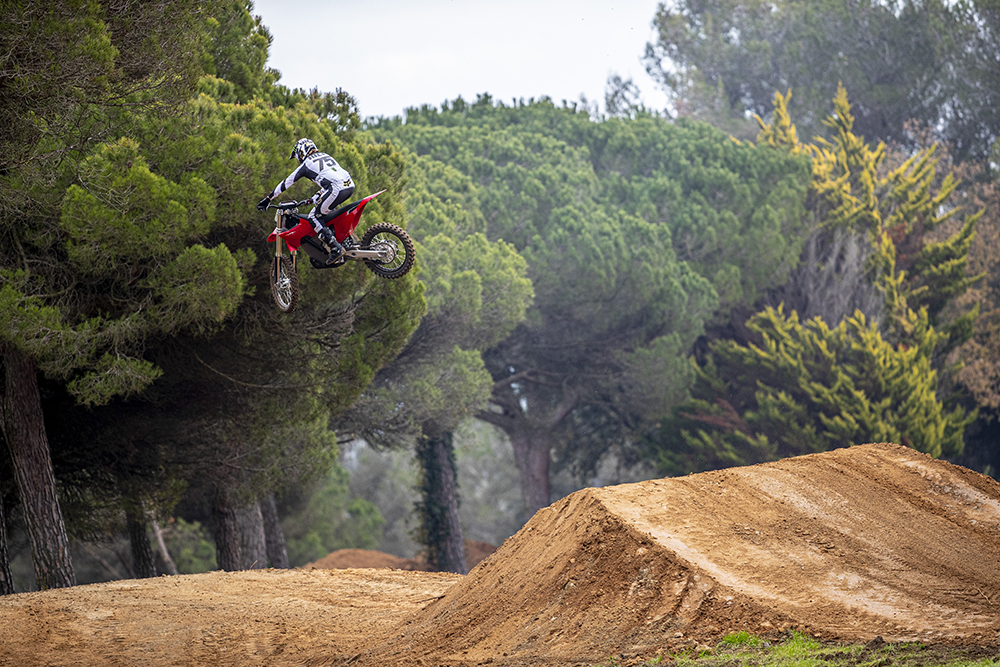