Royal Enfield turned its all-new twin-cylinder 650 into a nitrous-fed dragbike with double the poke, then tossed us the keys

Ever since Royal Enfield unveiled its two all-new retro-styled parallel twins – the Interceptor and Continental GT models – at the 75th EICMA Milan Show in November last year, potential customers around the world have been avidly waiting for them to reach production.

That’s not just because of the millions of RE fans – especially in India, the former British brand’s home country – who are eagerly looking forward to trying them out, with a view to buying one. In opting to limit the engine capacity of both new bikes to 650cc, the company has astutely targeted a potentially sizeable market because there is at present no competition in the retro-styled twin-cylinder sector, Triumph having declined to move the Bonneville any lower in capacity than the current 900cc T100.

The success of the Japanese entries in this capacity class, and especially Yamaha’s best-selling MT-03, shows there’s a global demand for 650 twins that Enfield is well placed to satisfy with something quite different than anything else available, especially with its much lower manufacturing costs – and thus retail prices – versus bikes made in Japan and Europe, or even Thailand. They’re powered by the same all-new air/oil-cooled single overhead cam eight-valve 648cc engine developed at Royal Enfield’s UK Technology Centre at Bruntingthorpe, near Leicester [see sidebar]. It is fitted with a single gear-driven counterbalancer to reduce vibration, and the 270-degree crankshaft is a forged one-piece item for extra strength and durability. Fitted with central chain camdrive, this fuel-injected motor employing a Bosch ECU runs a 9.5:1 compression ratio, denoting a low state of tune, most likely to ensure it runs well even on poor-quality fuel.

However, Royal Enfield is also developing its own ‘custom program’. This program originally focused entirely on aesthetics – there’s not a lot of added performance you can bring these days to a Euro 4 air-cooled pushrod single – but now, with the imminent market debut of the 650 Twins, it has started working on delivering extra oomph to the parallel twin, in what also amounts to a bit of what-if mechanical R&D work.

They’ve done so by collaborating with noted American tuning house S&S, whose base in Viola, Wisconsin has long been a temple of performance, and how to find it, since it was founded in 1958 by George Smith with a single goal in mind – to make motorcycles go faster.

The aptly titled Royal Enfield Lock Stock (as in the movie Lock, Stock and Two Smoking Barrels) was unveiled at London’s increasingly influential Bike Shed Show in May. 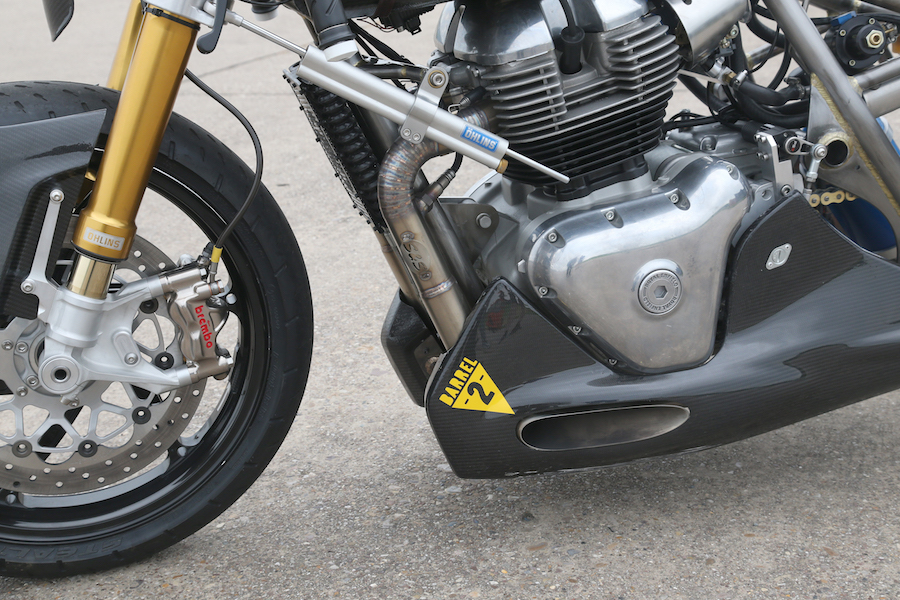 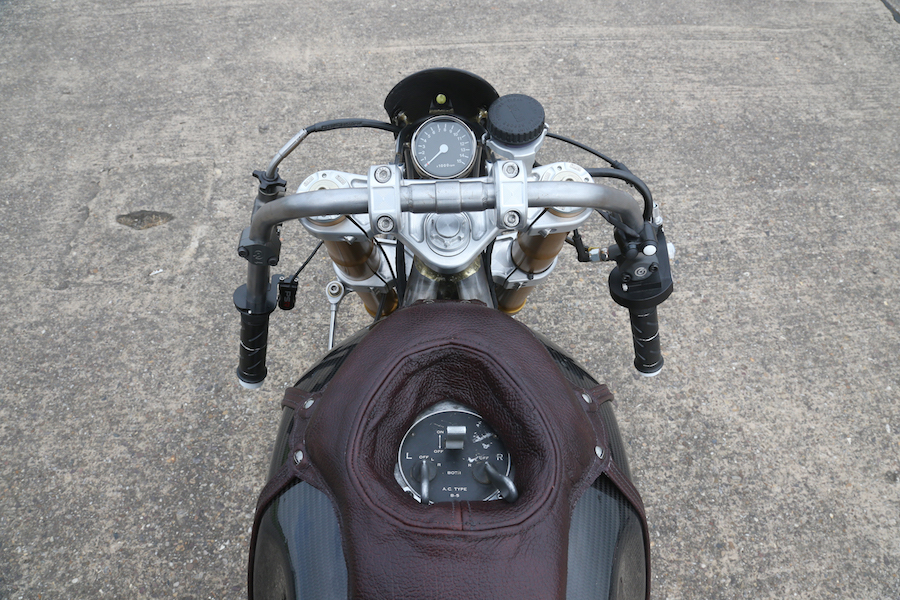 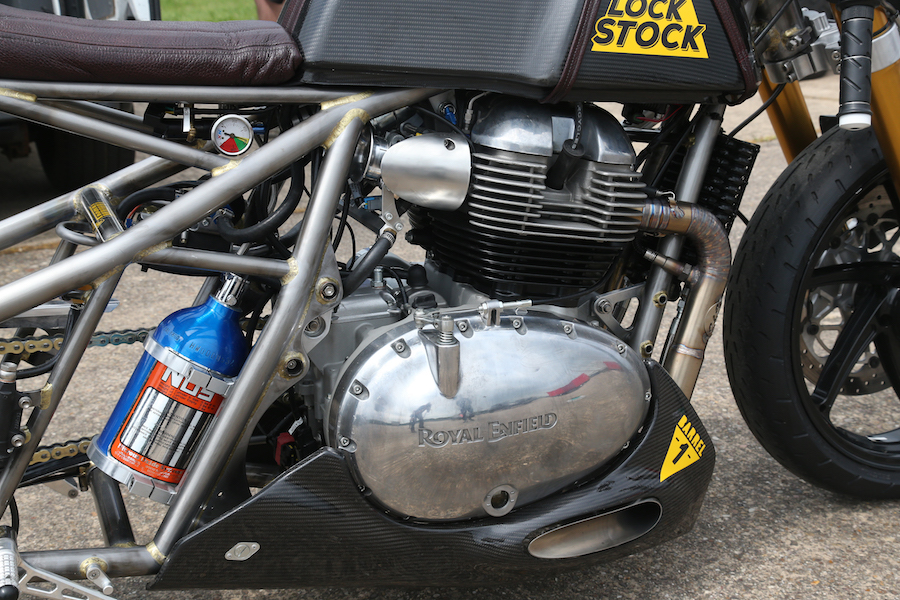 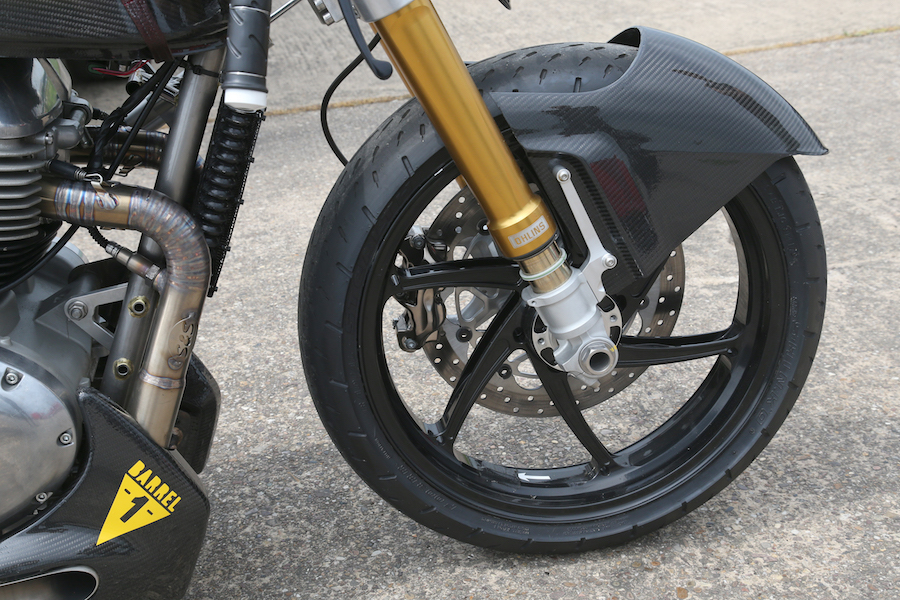 A couple of days later, I presented myself at Bruntingthorpe, where I was allowed into Royal Enfield’s super-secret enclave to view the showbike. I’d shortly be honoured with the chance to ride it along the mile-long runway just outside, where they film Top Gear, making it the first time anyone outside the company had ridden one of the new 650 Twins.

Well, that’s what it was before S&S got hold of a pre-production engine and massaged it more than a little to produce more than twice the horsepower of the stock motorcycle it came from, as well as more than double the torque.

Achieving that without detracting from the engine’s stock appearance was a key element in Royal Enfield’s brief, according to S&S’s Martin Szlagowski.

“We starting working with Royal Enfield about a year ago on this project, so it’s been on the go for a while,” he says. “First our engineers measured up the standard 650cc engine, and then they worked out where we wanted to go with the bore size available – it’s a parallel-twin, remember – the rod length, piston weight, stroke, etc. in order to maintain a standard looking engine externally that goes a lot faster, but is pleasant to the eye, and doesn’t detract from what the engineering staff at Enfield have done.

“This is the result, but with the added benefit of Nitrous oxide to the package – it’s a drag racer, after all!” Does this mean that S&S is planning to develop a Royal Enfield performance parts catalogue for tuning the Singles and Twins?

“The management teams from both companies have been in discussion about where we can go from this point,” says Martin. “We have a performance pedigree, Royal Enfield wants to expand its offerings to dealers and consumers, so there’s a good possibility that will happen.” Starting out with the stock 648cc motor which delivered a claimed 47hp at the crank at 7100rpm, and 52Nm of torque at 4000 revs, S&S bored out and presumably also stroked the Royal Enfield engine to measure 865cc – oh, hello Triumph! – without any modification to the crankcases or cylinders, although the exact dimensions are secret. Improvements include a high-performance camshaft, plus forged conrods on the stock but stroked forged crank, which carry high-compression forged pistons. These deliver a much higher 12.4:1 compression ratio in conjunction with a CNC-ported cylinder head, which now requires an oil cooler to cope with the increase in performance. The multipoint sequential EFI now features S&S’s own ECU, matched to larger 38mm throttle bodies and a high-flow injector kit. The racing exhaust features slash-cut custom headers, with straight-through pipes and no silencer.

All the pinions in the stock six-speed gearbox have been undercut, and are matched to a high-performance clutch kit and a quickshifter system controlled by two buttons mounted on the left handlebar. The nitrous is programmed to kick in at 4000rpm, and the engine redlines at 8500rpm, with a soft limiter one hundred revs lower.

To house this internally radically upgraded but externally standard-looking engine in a drag-racing frame, Group Manager for Industrial Design Adrian Sellers called on the services of the wholly-owned Royal Enfield subsidiary Harris Performance, whose long and glorious road racing history needs no introduction – but which, it turns out, had never before worked on a drag racer.

“Yes, that’s true,” admits Harris project leader Tim Allan. “Basically, our number one aim was really to make sure that it was going to be stable at high speed, and that it would be safe. But we also tried to keep it looking like the new Twin models, so we didn’t move too far away from the overall streetbike chassis design, even though there’s a hard tail rear end that’s been extended to deliver traction off the line, as well as stability at speed.

“It’s eight inches (203mm) longer than the stock bike, and we can alter the wheelbase by up to 150mm, depending on how we adjust the blocks in the rear axle. Originally it was going to be built for an eighth of a mile sprint event, but it’s kind of expanded from there – it’s got a little bit carried away with itself, and now we’re looking at going to Bonneville!” Think RE’s facilities are as simple as its bikes? Think again

Despite being owned by an Indian company, Royal Enfield retains strong ties with its British past, and in 2015 the foundations were laid for its new UK Technology Centre (UKTC) in Leicestershire. The ultra-modern facility sits within Bruntingthorpe Proving Grounds, the largest privately owned vehicle test track in the UK.

The 115-strong R&D team works on multiple projects, including future products and platforms.

The first modern Royal Enfield 650cc twin-cylinder engine and the new range of models it powers were developed jointly by the teams at UKTC and its equivalent R&D centre in Chennai, India. Plans are now under way for a new Chennai TC based on the Bruntingthorpe model, but four times bigger.

Read about our factory tour 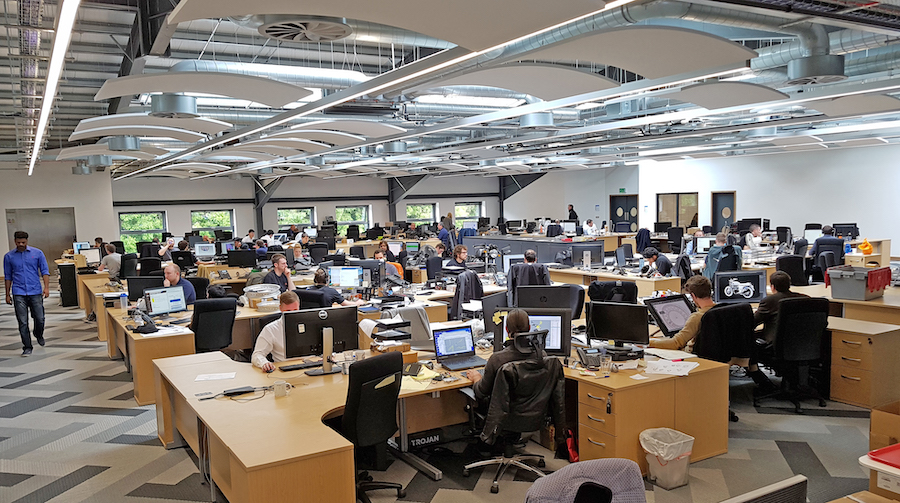 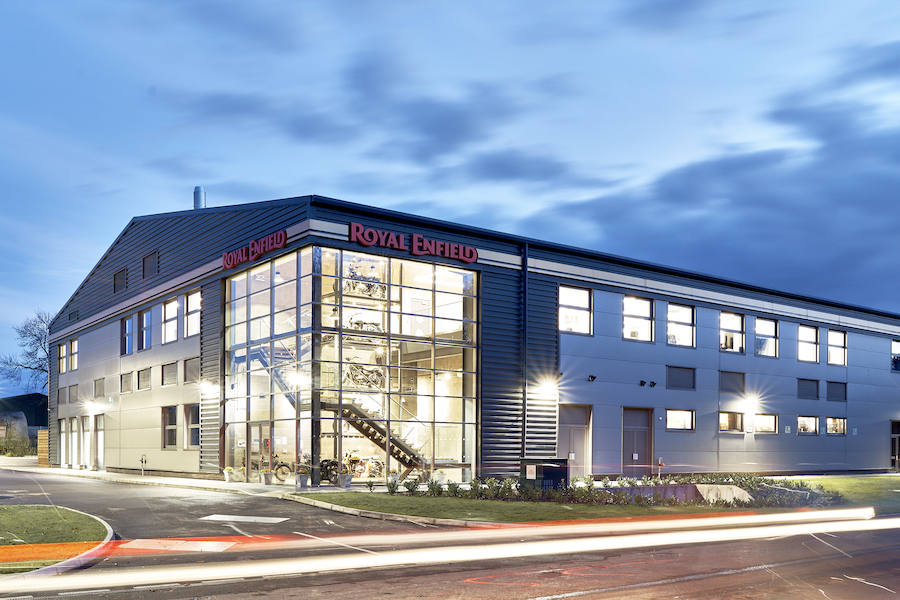