Almost half of all new motorcycles sold this year were roadies

Roadbikes are the stars of the recent new-bike sales data released by the Federal Chamber of Automotive Industries, figures which reveal a steady 3.5 percent growth in sales of motorcycles, scooters and ATVs during the first six months of 2016.

Roadies account for almost half of the new bikes sold, with 22,921 of the machines sold during the total period’s 52,782 result headed for the tarmac.

And while Honda retains the mantle for the highest volume overall, the best performer in the roadbike segment was once again Harley-Davidson which edged out the Japanese bike maker by a nose, selling 4685 new H-Ds compared to Honda’s new 4500 road-going bikes.

Yamaha, Kawasaki and BMW rounded out the top five in terms of roadbikes with the last of the big four Japanese brands, Suzuki, down in seventh place behind Triumph. Harley-Davidson enjoyed strong sales, definately helped along by the Street 500

Our road-going bias aside, Yamaha remained top dog in the increasingly competitive off-road segment accounting for 29 percent of the knobby-tyred segment moving 4782 new dirtbikes in the six-month period. The result represents an impressive growth of 15.5 percent over the same period last year, a considerable growth which is reflected across all of the tuning fork brand’s segments, except scooters.

In the off-road market, Honda was once again runner up, again only trailing by 673 units with 4109 dirtbikes sold compared to its Japanese rival. Then it was KTM (2683), Kawasaki (2059) and Suzuki (1865) making up the top five segment performers.

Bikes wise, the single most popular motorcycle for private Australian buyers is  Yamaha’s WR450F, the sales-chart regular experiencing a significant increase over the same period last year selling 924 in the first six months of 2016 compared to 524 last year. Kawasaki’s LAMS-approved Ninja crossed the line in second place despite its 26.3 percent decline period on period with 808 units, while Honda’s CRF50 fun bike took the last step of the overall sales podium and enjoying a 14.9 percent growth over the same 2015 period with 777 units sold in the first six months of 2016. 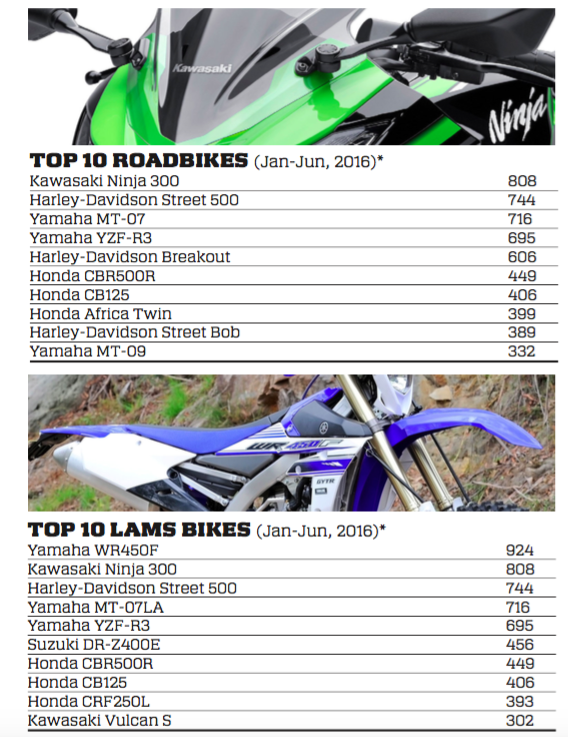 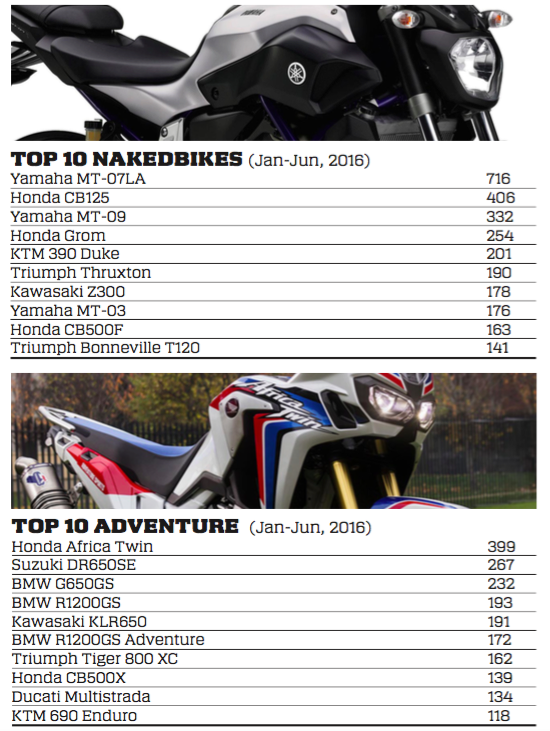