It took just a split-second for everything to change. I was at a fun meeting called Historic Winton, which involves classic cars and motorcycles. There were some of the usual suspects from the annual AMCN International Island Classic, but my main challenger was Beau Beaton on the Irving Vincent.

We’ve raced against each other forever, from supermotard to superbikes. Historic Winton is supposed to be just a bit of low-key weekend rivalry but when two riders like us get together the competitive urge soon takes over.

I qualified on pole and won the first two races, but there was nothing between me and Beau. The big crowd of spectators, more used to seeing car racers hidden behind bodywork than watching motorcycle racers hanging it all out in the breeze, was urging us on.

While many of the other riders were socialising between races, I was working with Rex Wolfenden, checking lap times and making suspension adjustments to his 1982 Harris F1 Honda to make sure I stayed in front of Beau.

Things were all going to plan in our third race but I could hear the big Vincent was right with me. Then, just near the exit of the sweeper, Beau’s front wheel suddenly appeared in my peripheral vision.

This wasn’t good and I thought, “Beau, mate, you’re giving me nothing here to play with!”

One option would have been to pick up my bike and ride it over the ripple strip but the last time I did that here on this circuit, I’d launched my 2002 Suzuki GSX-R1000 into orbit and totalled it.

His bike touched mine and I tried to push it off with my knee, hoping we’d somehow ride it out together. But the contact was made just ahead of the left-hand footpeg and the Vincent’s front wheel rode up the back of my calf into my knee.

Both of our bikes catapulted down the track and I ended up on my haunches, very winded, and with a badly broken left wrist, now for the fourth time in my racing career.

Extremely apologetic and concerned, Beau was quickly up across to me to see if I was okay.

Racesafe were also on the scene in an instant and I can’t say enough good things about the organisation. They should be a necessity at all meetings. Their response time to incidents is amazing. They understand motorcycle injuries and deal with these situations every weekend.

Everyone who goes out on a track, whether it is to race or be part of a ride day, risks injury that can affect their daily life. I probably should have had a week off to get myself fixed up but I was back at work on the Tuesday after getting my left arm plastered from my hand to my armpit. Fortunately for me, I’d recently been transferred off the tools to run Urban Moto Imports technical department. Hands-free phones and one-handed emails are how I work now. 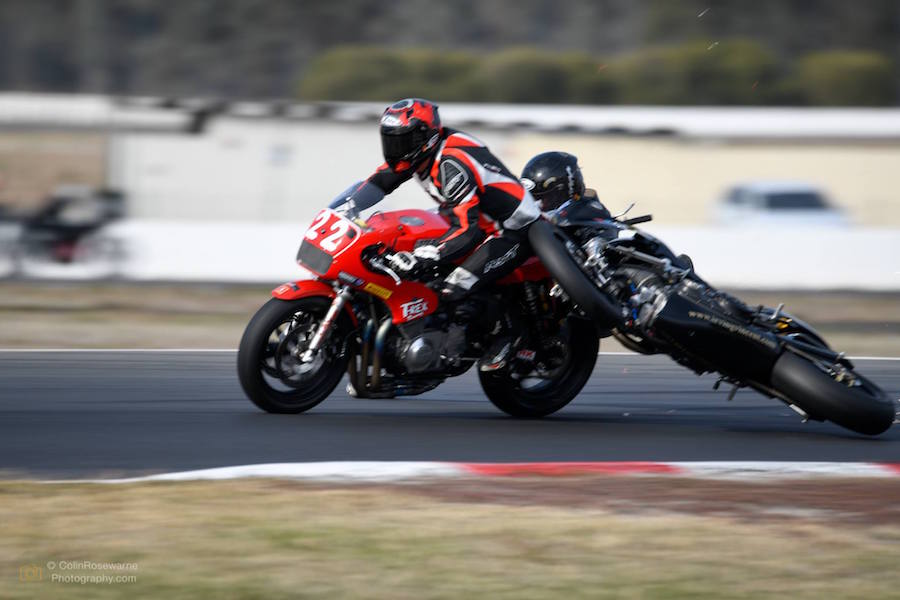 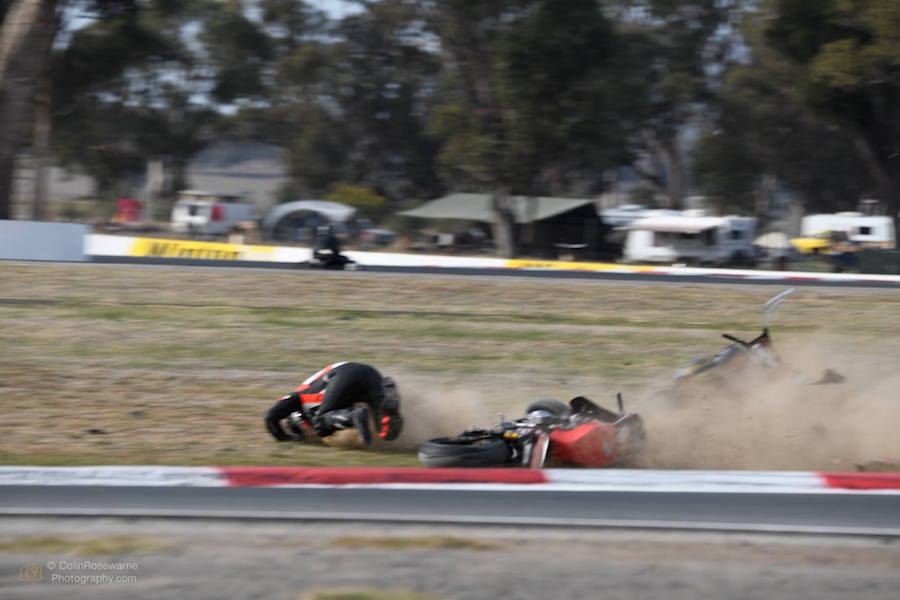 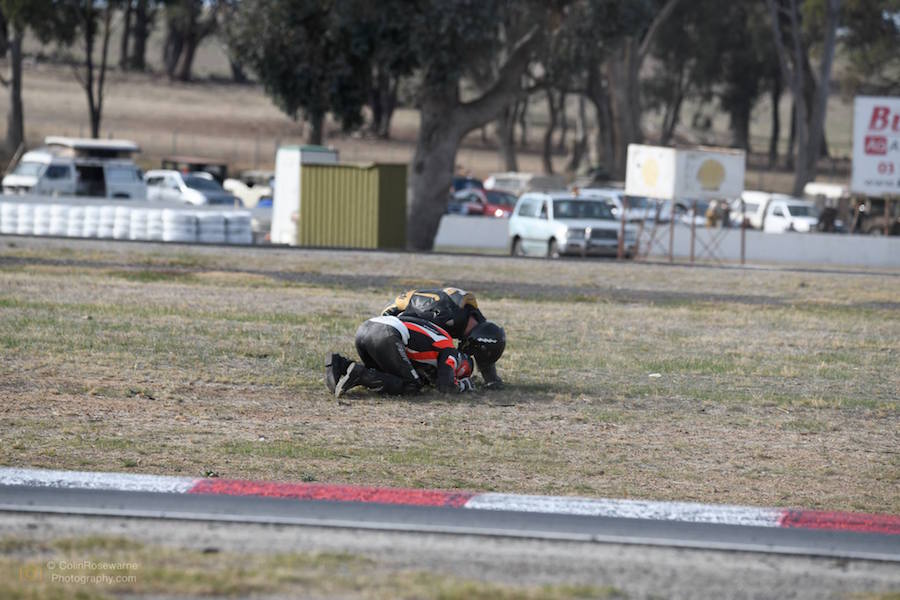 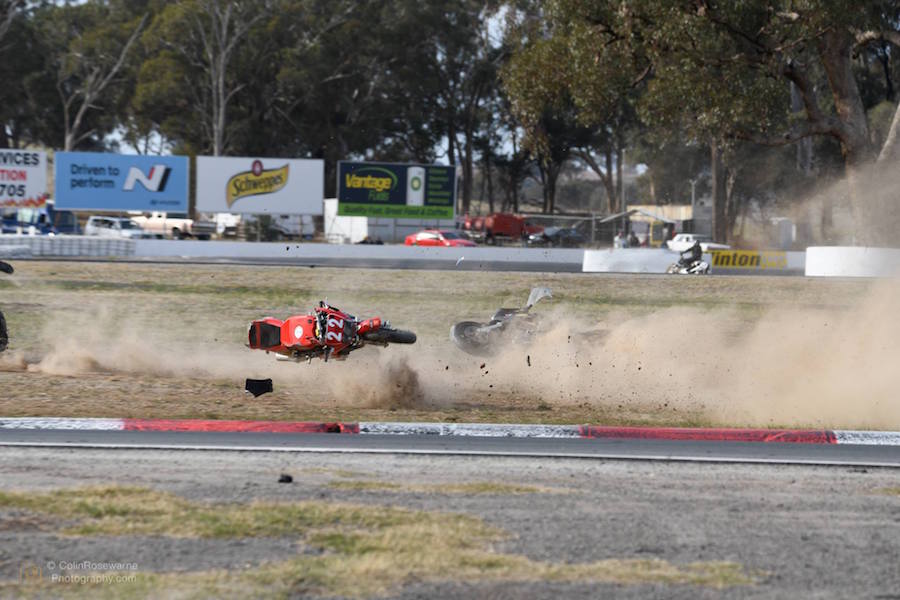 Historic racing can be as involving as a championship meeting. There is so much passion with riders competing on the machines they dreamed about in their youth.

People like Rex, whose lives revolve around building these bikes, want to see riders like Beau and I take them to the limit but they don’t want them coming back in a wheelbarrow.

The frame is bent in five places, the Dymag wheels and many other bits destroyed. It won’t take rocket science to rebuild it – though Rex is a scientist! – just months of painstakingly fabricating one-off parts.

This year I’ve committed to racing in the Victorian Road Racing Championships on my GSX-R1000 and the Off-Road Championships on my 2018 Gas Gas XC 300. The next rounds are in August and I will be back, mentally ready to race even if I’m not back to peak physical fitness. Because I throughly enjoy the process and love how you never stop learning about lines and bike set-up. See you out there.