REA VERSUS DUCATI IN ARAGON | WSBK

A titanic battle between the two championship leaders ended with Scott Redding (ARUBA.IT Racing – Ducati) taking victory as well as the points lead in the 2020 MOTUL FIM Superbike World Championship race after a sensational opening battle at the Aragon round in Spain.

Redding started the race from third place and held position in the early stages while polesitter Jonathan Rea (Kawasaki Racing Team WorldSBK) fought his way back through the field after a poor start, Rea back in the lead after just a couple of laps. Rea was passed by Redding on lap 7 of 18 but was able to keep with Redding although not able to regain the lead; the Ducati’s straight-line speed helping keep Redding ahead. As Rea continued to pressure Redding, the pair went side by side with Rea looking to take charge but a mistake on lap 14, where Rea went wide, allowed Redding to stay in front.

Davies was able to get by Rea just a few laps later and started to close in on Redding, finishing the race just three tenths behind Redding as they battled for the lead; the pair claiming a Ducati 1-2 finish after Davies battled through from ninth, with Rea claiming a podium on his 150th start for KRT. The result means Redding moves back into the championship lead but with plenty of points still available to claim. 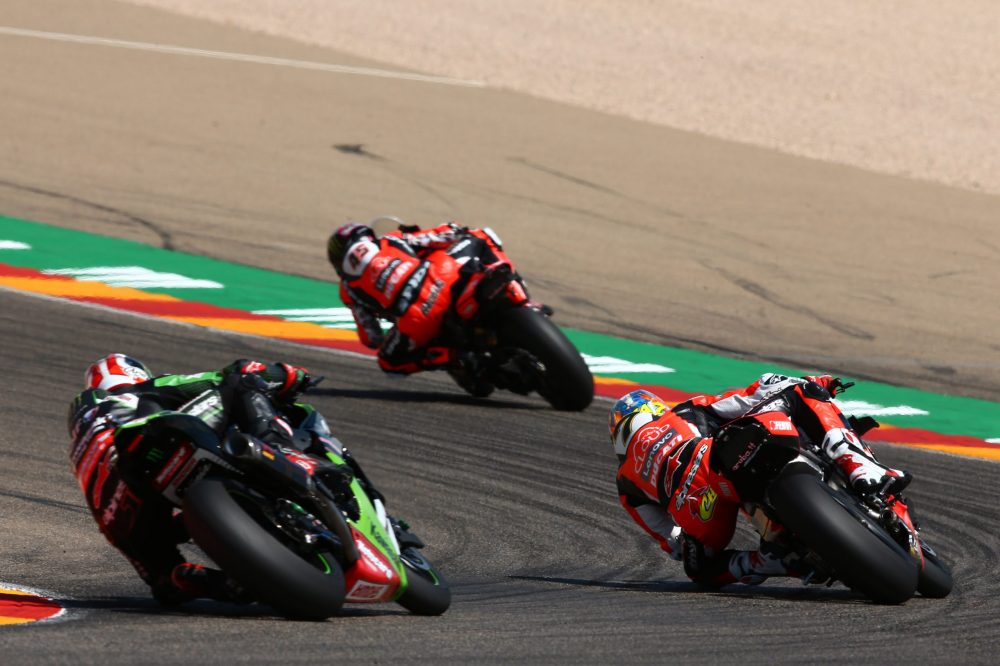 Michael Ruben Rinaldi (Team GOELEVEN) once again secured a fourth-place finish in 2020 as his impressive form continued, with the Italian rider putting on a late-race move on Michael van der Mark (PATA YAMAHA WorldSBK Official Team) finishing in fifth place. Toprak Razgatlioglu (PATA YAMAHA WorldSBK Official Team) was another rider who fought his way back through the field as he finished in sixth place, after starting outside the top 10, although finished ten seconds behind his teammate.

Loris Baz (Ten Kate Racing Yamaha) was classified in seventh place despite starting on the front row and taking the lead at the start as Baz looked for another podium in 2020. There was a battle between Baz and Xavi Fores (Kawasaki Puccetti Racing) towards the end of the race with the pair separated by just a second at the end of the race. Federico Caricasulo (GRT Yamaha WorldSBK Junior Team) finished in ninth place with Leon Haslam (Team HRC) completing the top ten.

It was a strong race performance from Leandro Mercado (Motocorsa Racing) as the Argentinian rider claimed an 11thplace finish, ahead of Sylvain Barrier (Brixx Performance) in 12th. Roman Ramos (OUTDO Kawasaki TPR) marked his 100th WorldSBK start with a points finish as the Spaniard completed his first race since his return to the championship, ahead of another mid-season returnee in Marco Melandri (Barni Racing Team). Takumi Takahashi (MIE Racing Althea Honda Team) secured his first points finish of the season with 15th in race one at Aragon and also claimed the team’s first points of 2020. 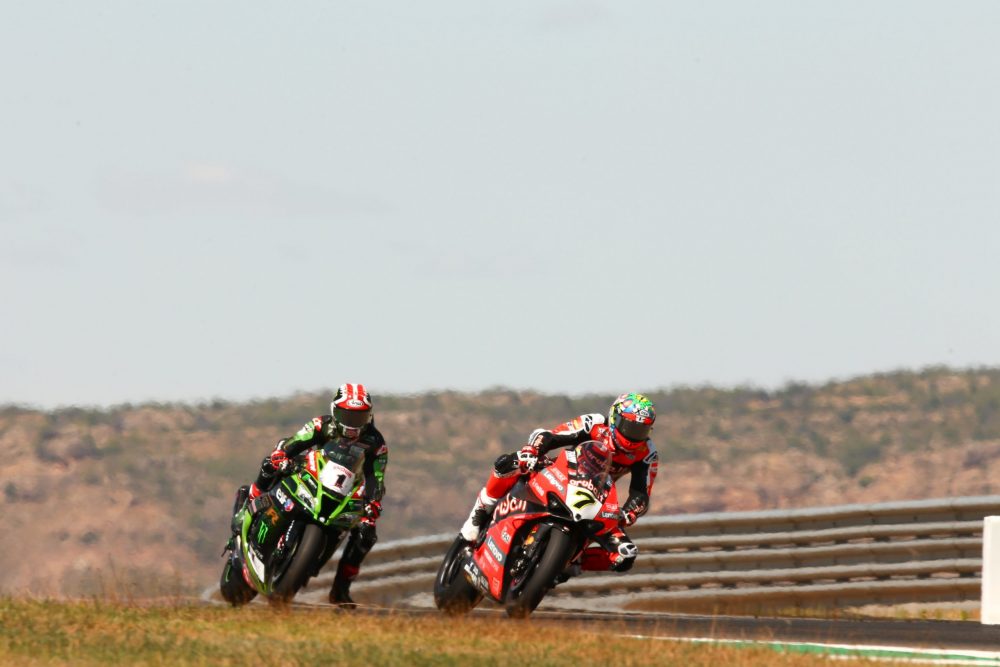 Eugene Laverty (BMW Motorrad WorldSBK Official Team) finished in 16th place after a dramatic rush to start the race; the Irish rider coming off his bike on the lap to the start with the team fixing his machine on the grid. Laverty was given a ride-through penalty during the race but was able to finish ahead of Lorenzo Gabellini (MIE Racing Althea Honda Team).

Christophe Ponsson (Nuova M2 Racing) had a crash during the race at the corkscrew section which put the Frenchman out of the race on his Aprilia while Alex Lowes (Kawasaki Racing Team WorldSBK) also retired from the race; Lowes coming off his bike as he came over the crest of the hill. Tom Sykes (BMW Motorrad WorldSBK Team) pitted in the early stages of the race with the British rider retiring while Garrett Gerloff (GRT Yamaha WorldSBK Junior Team) also suffered a crash in the first half of the race. Alvaro Bautista (Team HRC) and Maximilian Scheib (ORELAC Racing VerdNatura) both retired from the race after separate incidents on the same lap.

P1 Scott Redding (ARUBA.IT Racing – Ducati)
“I’ve got to thank the Aruba Ducati team. Honestly, we have struggled a lot. The main thing I’ve found with me and my team this year, which is very good, is that we never give up. We weren’t holding back in any practice session, and I just tried to keep my head clean. I said after Superpole I didn’t feel that good, but we did make an improvement and it just gave me confidence. When I was in the race and behind the guys, I could see where I was struggling and what I was maybe doing wrong. I managed clean my laps up a bit, I felt good. I thought I’d try to pass Jonny and then hold my own. I just did consistent laps one after the other, and then I think him and Chaz started battling which gave me a bit of breathing space at the end. We’ve got a little bit of work to do as I wasn’t completely happy with how the bike was reacting in the last bit of the race, but I was just managing and to come away with a victory today is spot on.” 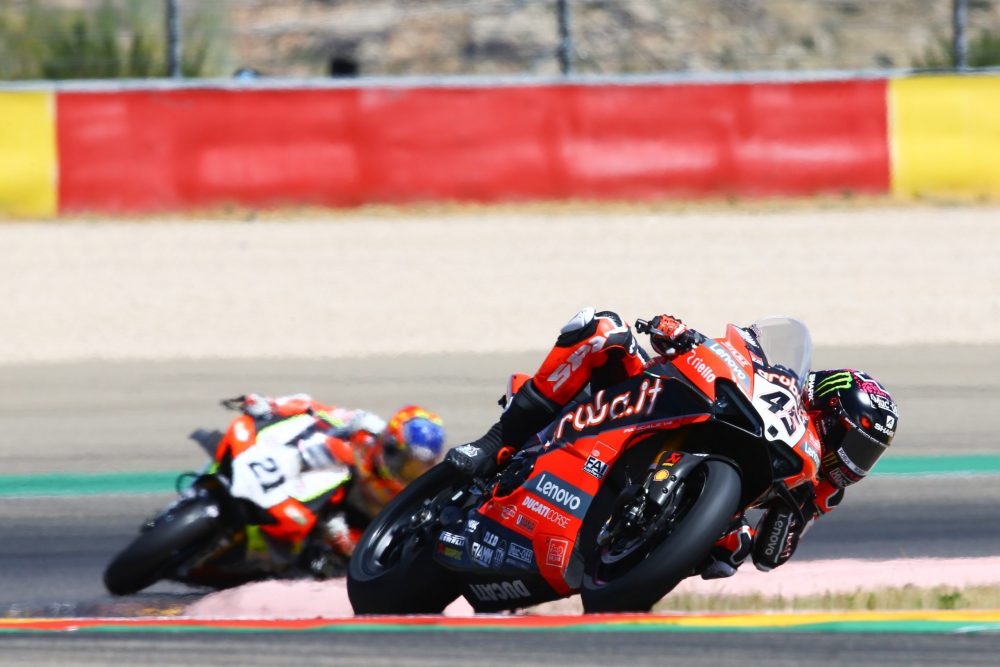 Off the sprint start, Rea had fallen behind Loris Baz (Ten Kate Racing Yamaha) in a similar scene to Saturday’s race one, but took just two corners to re-gain the lead. He pulled away from the chasing group to claim victory and secure pole for race two, with Scott Redding (ARUBA.IT Racing – Ducati) in second and Michael van der Mark (PATA YAMAHA WorldSBK Official Team) third. 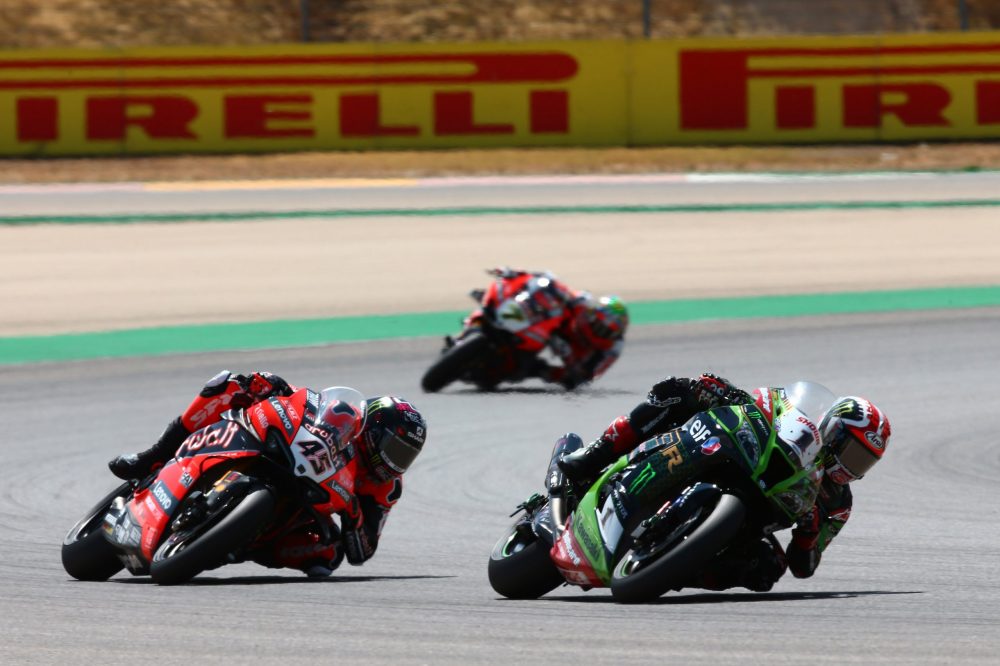 Alvaro Bautista (Team HRC) finished fourth after the Spanish rider passed Alex Lowes (Kawasaki Racing Team WorldSBK) in the closing stages of the 10-lap race. It means Bautista secures his best result of 2020 and Honda’s first top four since Buriram race one in 2018 with Leon Camier.

Toprak Razgatlioglu (PATA YAMAHA WorldSBK Official Team) battled his way up from 11th on the grid to secure a third row start in race two, with seventh, with Michael Ruben Rinaldi (Team GOELEVEN) lining up alongside him. Baz, who had challenged on the first lap, fell back during the race but was able to claim a ninth-place finish to take a third row start for Race 2.

There was drama on lap one when Tom Sykes (BMW Motorrad WorldSBK Team) went off the track at the Turn 8 and 9 corkscrew section after battling with Davies, re-joining the circuit and making contact with Leandro Mercado (Motocorsa Racing); ) the Argentinean rider coming off his bike and retiring from the race while Sykes was able to continue. He was taken to the medical centre for a check-up after the incident with Sykes placed under investigation. 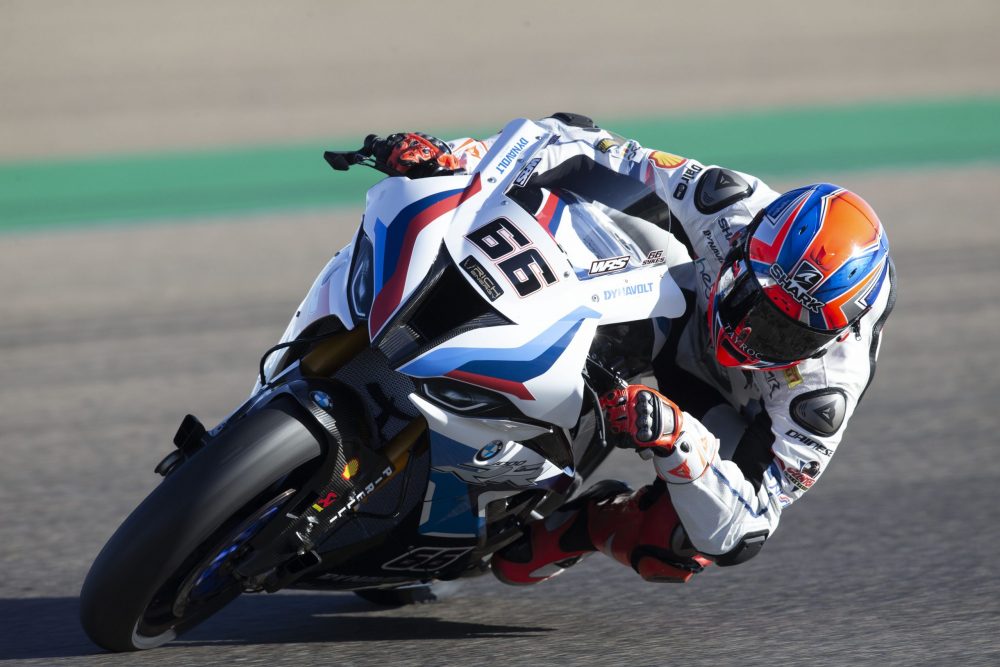 In Sunday’s race two, Rea started the race from pole position and, despite pressure from Redding in the early corners, was able to pull away from the chasing group. Rea led every lap throughout the race despite a mistake on lap 14 which allowed Davies to close the gap from around two seconds to just two tenths. 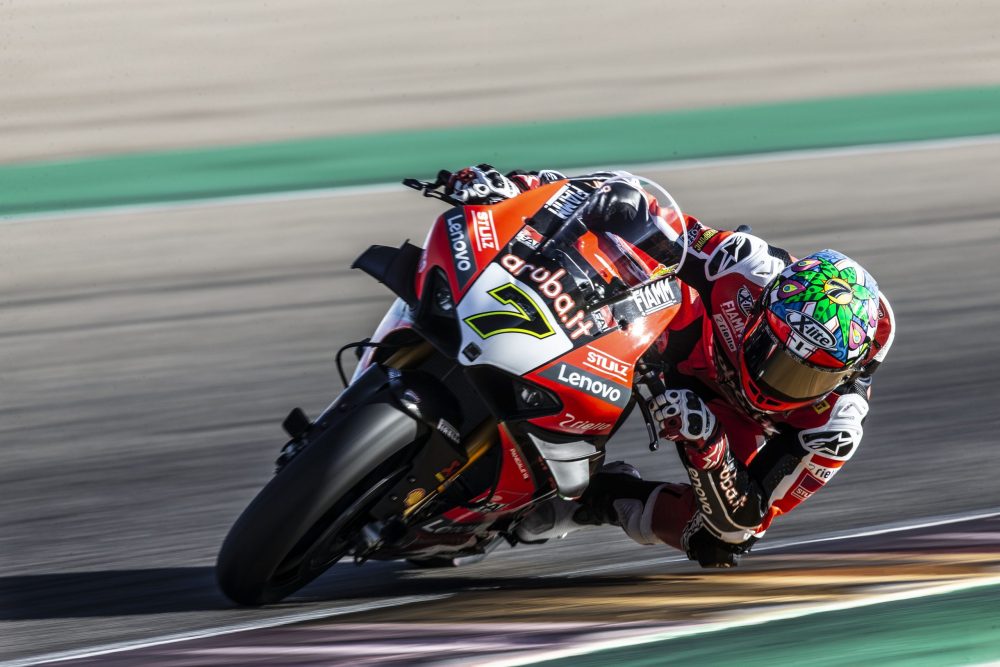 Despite Davies attempting a move into turn one on lap 15, Rea held on to take victory by over one second ahead of Davies. Alvaro Bautista (Team HRC), who started the race from fourth, got ahead of Redding in the early stages, claimed his first podium for Honda and Honda’s first podium since Magny-Cours in 2016; Bautista and Honda showing good pace throughout the weekend. 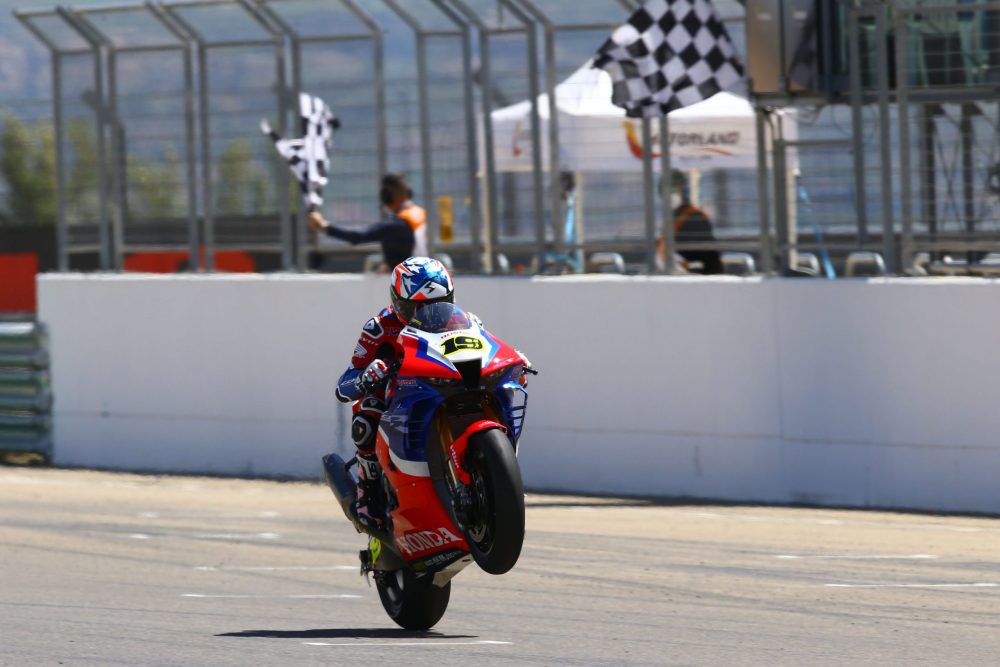 Redding would finish the race in fourth place after being passed by Bautista and Davies, but the British rider also had to make a move on Michael van der Mark (PATA YAMAHA WorldSBK Official Team) on lap four to help secure fourth place. Michael Ruben Rinaldi (Team GOELEVEN) made it three Ducati machines in the top five with fifth place as he also got by van der Mark, with the Dutchman finishing in sixth place.

Sylvain Barrier (Brixx Performance), Christophe Ponsson (Nuova M2 Racing), Takumi Takahashi (MIE Racing Althea Honda Team) and teammate Lorenzo Gabellini all finished the race while Loris Baz (Ten Kate Racing Yamaha) retired from the race following a crash on lap four of 18 at turn 15; the French rider unable to re-join the race following the incident where he came off on his bike on his own. He was not the only non-finisher as Marco Melandri (Barni Racing) who retired with a technical issue and Roman Ramos (OUTDO Kawasaki TPR) retired from the race on the penultimate lap.

P1 Jonathan Rea (Kawasaki Racing Team WorldSBK)
“I can’t believe the pace; I didn’t expect that. We kept the bike the same as yesterday, just changed the front tyre. We went for the SC1 front compound instead of the harder one and in this hotter temperature it seemed to work a little bit better. At the end, Chaz was coming, and I made a massive mistake in the last corner. I went in fourth gear and had no engine braking to stop me. I thought I was going to go down, but I just couldn’t get that last shift. I lost the position as Chaz came through, but I knew I needed to go straight back past and put my head down because I had a little bit extra.” 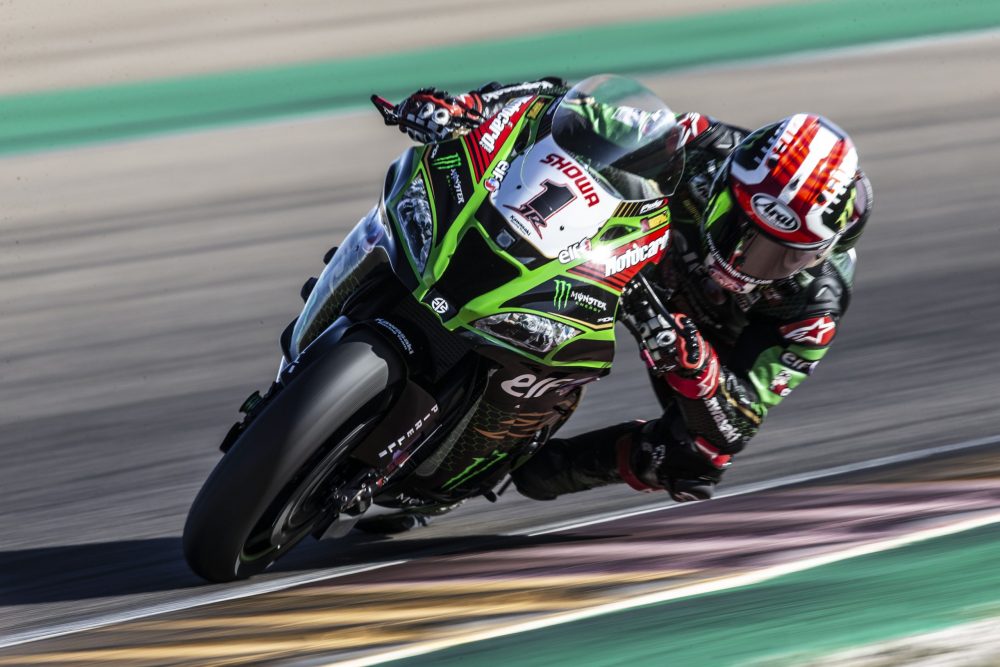