Race meetings simply can’t exist without accurate timing. We get in the boss of Computime’s ear to get a picture of the important behind-the-scenes process

An interview with Scott Laing – Computime

How did you get into racing and race timing?

My father raced bikes in the 60s until the early 2000s. My mum was always involved in the administration side of things, so as a child I was always at a racetrack. At the two-plus-four events at Sandown in the 70s they had this old clunking Longines timing machine where you would press a button and a lap time would come out. The time would get passed on to a whole bunch of people and they would calculate the difference in times between each competitor and you could then generate a lap time. 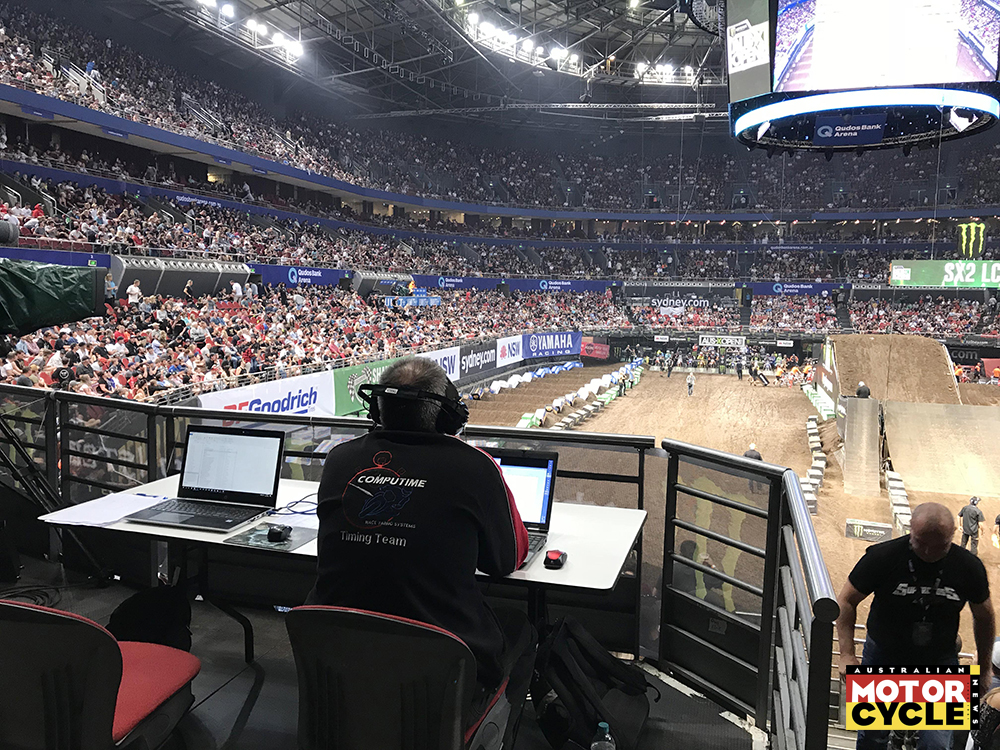 Qudos Bank Arena in Sydney. There are no banks of huge computers involved.

In the early 80s computers started to come on board a bit and at some point I figured out computers could play a role in race timing. I wrote the first program we had using the BASIC computer language and, like the Longines machine, you would hit a button as the bike crossed the line and it would spit out a time. You would key a number next to the time, and the program would work out the lap time of each competitor. It got more complex over the years, and I had a mate who was helping out with programming. We were only doing it for the Sandown club, but then we started offering our services to others and it all grew from there. From 2004 we started doing what is now known as ASBK, we are doing ProMX, we’ve done MotoGP and World Superbikes since 1994, all the main events. 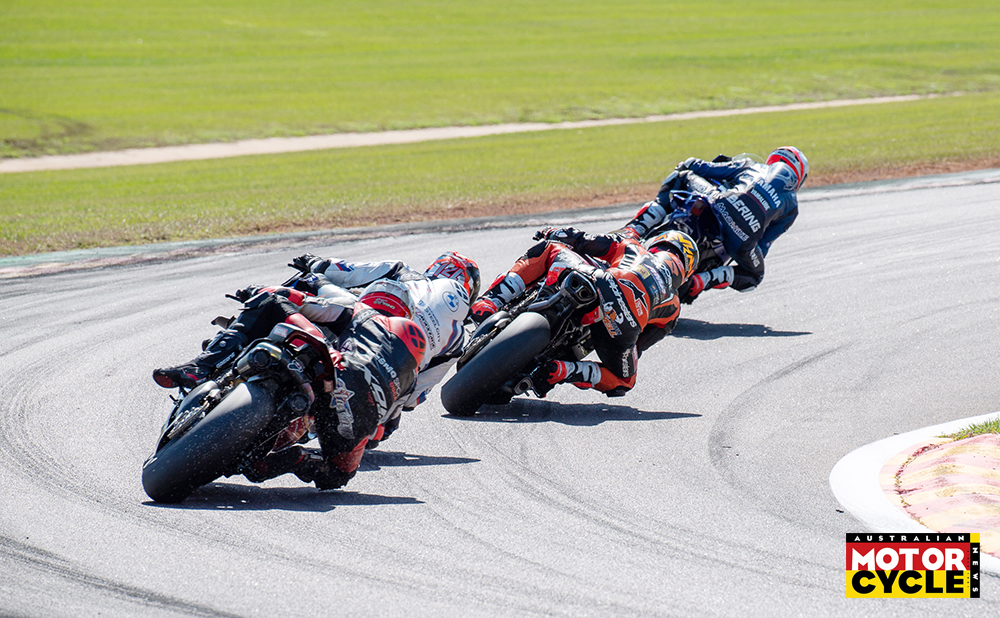 The ASBK has been Computimed since 2004.

So the first system was still a manual process?

It was manual to the extent that the lap times were registered by someone physically pushing a button. That occurred until about the mid-90s, when we started using transponders.

The first system was the Dorian system, still used in cars today. Today we use the MyLaps transponders and they are considered the world leaders in race timing hardware. It automates the process and that means you need less people. We used to need up to six people, now we can get by with one or two. Our work now is all about setup, once the event starts the software does everything for you – but some events can still be very complex. Mark Arnold looks after all our technical requirements.

The system’s portability means that off-road events can be timed accurately.

How does a modern timing system work?

When we are going to a road-race track, there are timing loops built into the track surface at the start / finish line. As the bike goes over the loop, the loop picks up the time and number of the transponder, then the timing software carries out the calculations for lap times. Most tracks also have intermediate or sector timing loops, there are also loops at pit entry and exit, and a speed trap loop. The speed trap loop is 30 metres apart, and it calculates your average speed, which is effectively the top speed. We also calculate split times, best partial (or ideal) lap times and there is also a link to race control so they can input incidents during a race or session like ‘start under investigation’ or ‘crash between two riders’ or something like that.

The Computime crew at Phillip Island.

And you also run cameras for photo finishes or jump starts?

Yes, you still need that because even though the transponders are very accurate, there are no rules in Australia that says where you have to mount them. Most people mount them at the top of the fork, but because they can be located at different points on the bike we also run photo-finish cameras – as well as start line cameras to check for jump starts. 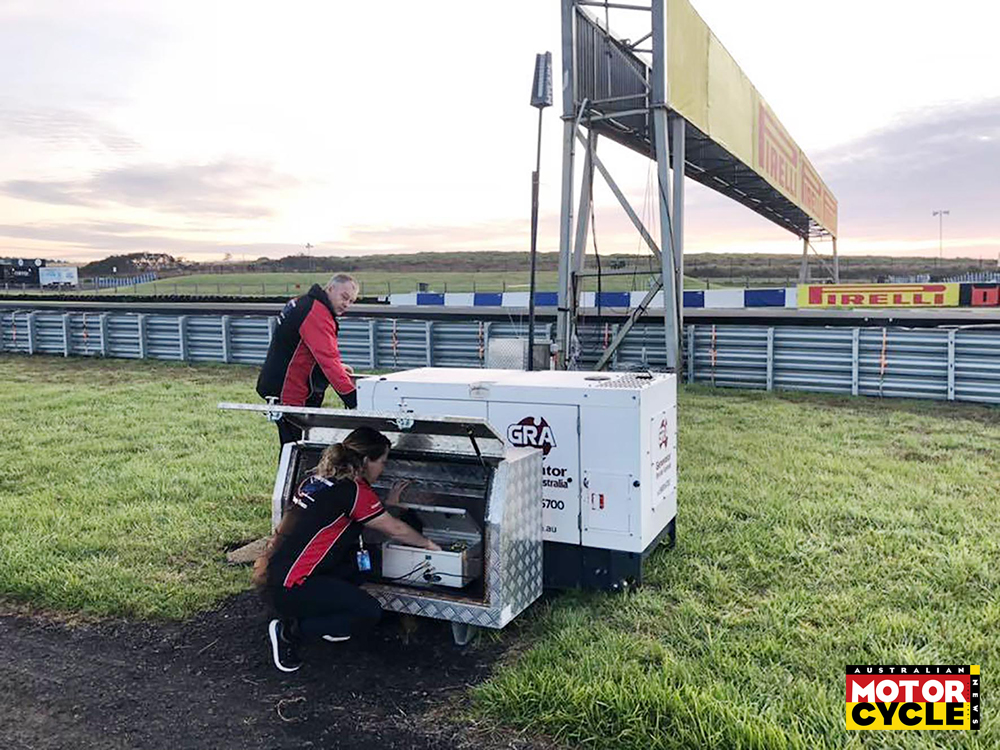 Setting up an intermediate timing point.

What about a back-up if things go wrong?

Manual backups are really a thing of the past now, even at MotoGP level. We run our timing on two separate computers so there is redundancy and we have power back-up as well, so the chance of a complete failure is very slim. 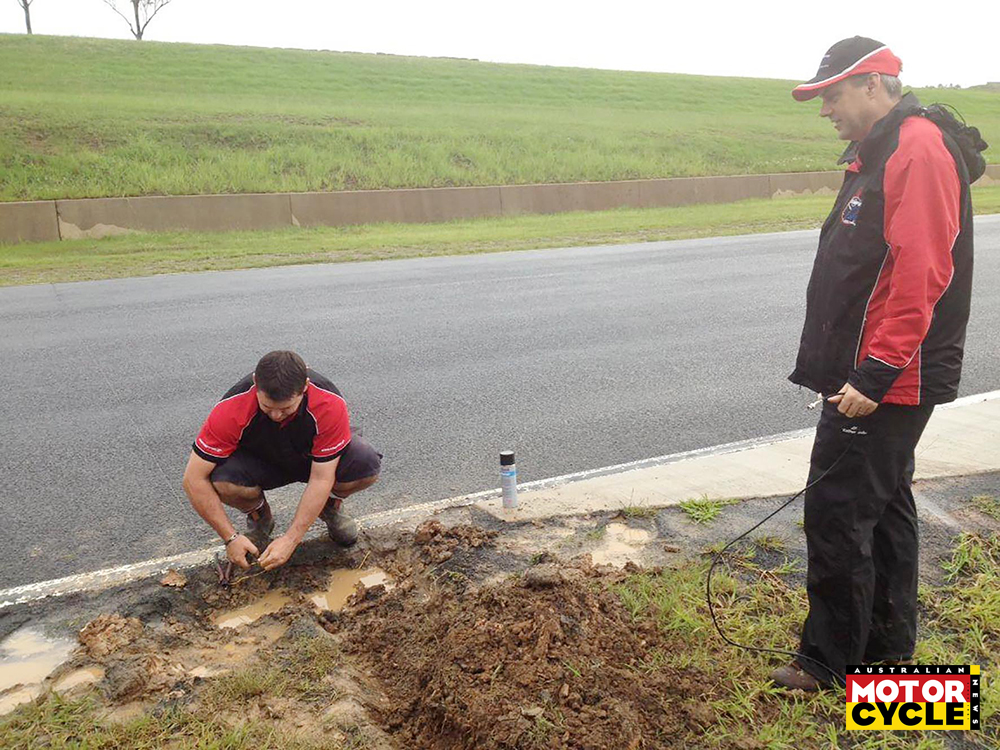 Timing loops need to be maintained to guarantee accuracy.

What developments or innovations are on the horizon?

We’re always developing our software and this year we are focussing on our TV display.

Something I’ve wanted to get happening for competitors is effectively a personalised timing display. It’s designed for teams in the pits, you select your rider and it has information for just them – their position, who’s behind or ahead, best lap, last lap – almost like a pit board display. There has been a lot of work with MyLaps at ASBK level with what is called Race Links. It’s effectively an additional transponder on the bike which does have a GPS that can accurately show where any bike is at any time, as well as their speed. It’s predominantly used for rider safety, not more information for the rider. You can provide an alert if someone goes off track and there are a whole lot of LED lights on the transponder, so you effectively create flagging zones.