Unless you’ve got a signed MotoGP or WorldSBK contract in your pocket, you will never ride anything better around a track than this

“Oh well,” I thought last year. “I’ll never get to ride that.” It was BMW’s look-what-we-can-do-because-we-can HP4 Race machine, a bike so far above the level of its road-going S 1000 RR, it’s simply incomparable. I was, happily, wrong. But it wasn’t just me getting to ride this $115,000 two-wheeled missile, BMW Experience customers could alight their roadbike and, following a brief and basic track-riding assessment, leap aboard a bike destined to blow anyone but WorldSBK or MotoGP racer’s minds. A brave move.

I’m hard to impress these days, 17 years testing bikes will do that, but the sight of a pair of HP4s sitting on race stands, vibrating gently as they warm up and sounding for all the world like they are about to attack a bear with a meat cleaver, I am failing for appropriate superlatives. I make my way straight to their side upon arrival at Sydney Motorsport Park. These things are lighter than a WSBK machine (171.4kg ready to ride, versus WorldSBK’s regulated 168kg half-wet figure) and look it. The mere presence of this bike, growling through the titanium Akrapovic exhaust and bamboozling you with the array of brightly coloured buttons on the bars, is enough to make you feel all WSBK.

The power-to-weight ratio, and the damp nature of the day I am destined to ride it, are adding to the excitement. A claimed 215hp from a racy, quick-revving powerplant has me quietly shitting myself.

As if reading my mind, Next Gen Motorsports race tech Shane Kinderis steps in to talk us through one of the major points of difference between this machine and the road and race bikes I am used to – the electronics.

Forget everything you know about rider aides on your roadbike – its system is nowhere near as powerful as this one. Because of this, how you ride it changes, too. 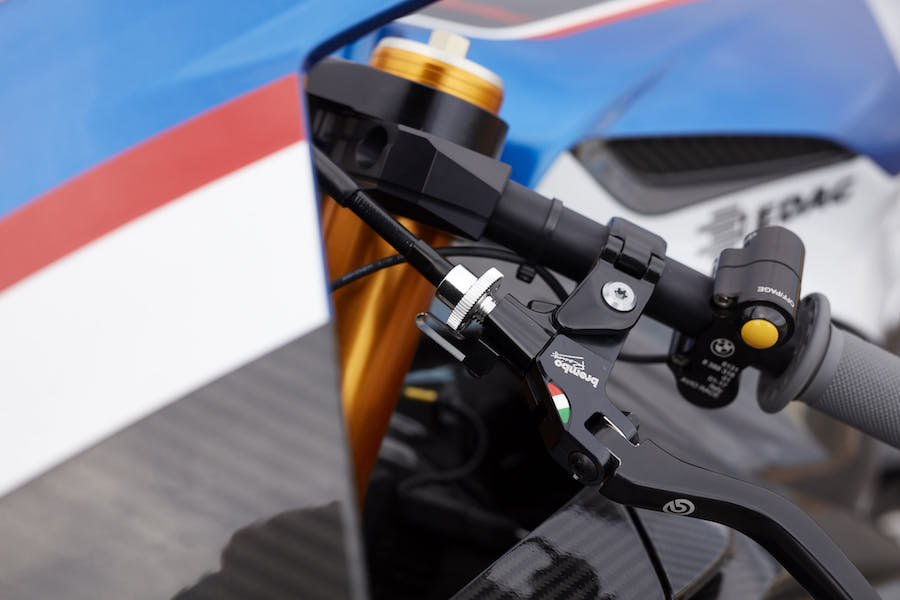 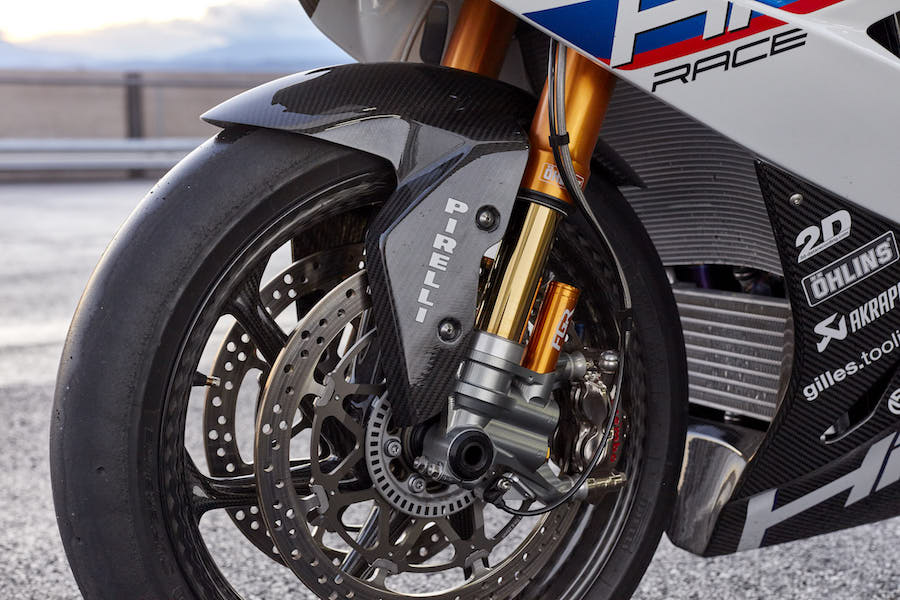 “When it power wheelies – and it will because of the power to weight ratio, don’t back off or hit the rear brake – just keep the throttle tapped and let the electronics control it,” Shane is saying, as if it makes sense to someone who has spent a lifetime doing the opposite. “The  bike is designed to go fast and the electronics are, too. Unlike a roadbike, the electronics will control the wheelie, but do it without losing forward drive. It will do it better than you can. Just trust it.”

Sure, Shane, I’ll throw 25 years of riding experience out the window and just get on it everywhere, on someone else’s (actually, BMW Germany’s) $114,500 bike… BMW Australia’s marketing guy is standing there too and seems happy with that advice, which is confusing. He is clearly nervous about so many people riding this rare jewel (just 750 of the hand-built machines exist), but not about the ‘tap it and go’ advice. I’m starting to think maybe there’s something in Shane’s advice.

Shane is now talking me through the breadth of available adjustment and the short way to explain that is to say: you can adjust everything. Bloody everything the engine does, when connected to the throttle, can be adjusted in relation to how the traction and wheelie control works, how the electronic braking assist operates (not to be confused with ABS). Then there’s the myriad ride positions and geometry changes you can make. Shane’s job is to interpret what a rider wants from the bike, then figure out the maths required to make it happen. Better him than me. 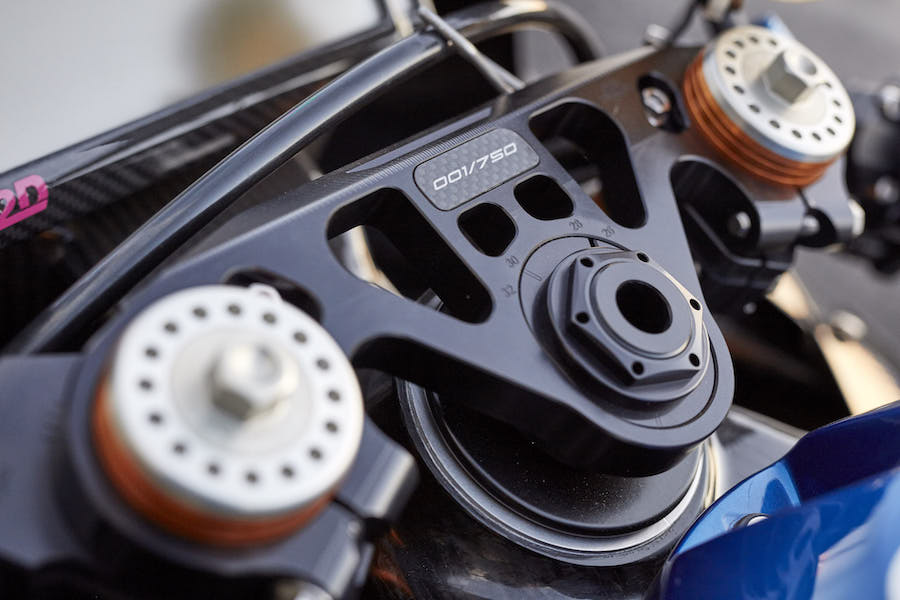 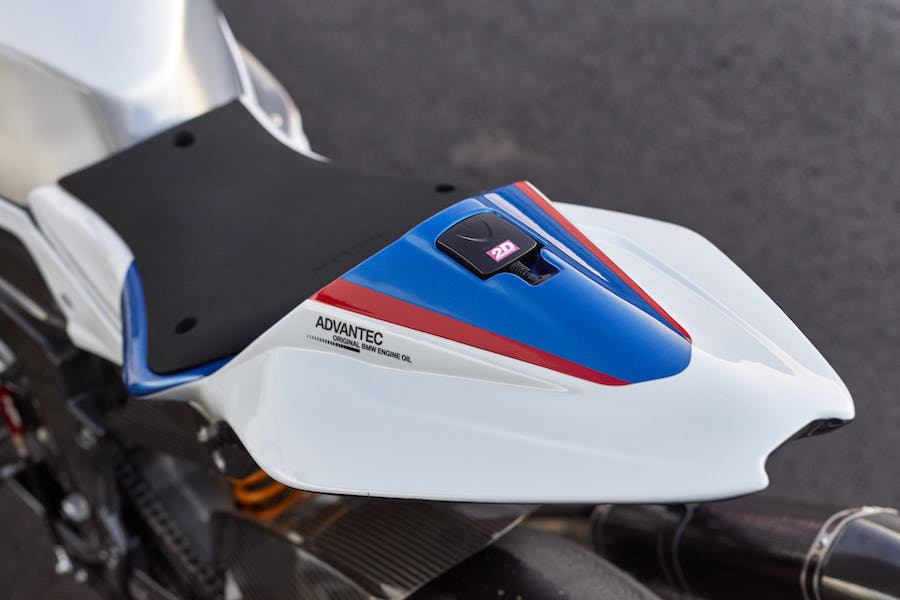 As I leather up, I am looking nervously looking skywards. I always back myself to bring a bike back undamaged, but in slimy weather on a track not great for wet-weather grip and the most expensive bike I’ve ridden, I’m not stoked. Add to that face that I’m sharing the track with riders on normal roadbikes and who are not all especially used to racetracks and my heart rate is at 220bpm before I even get on board.

I climb on to check levers and discover the promise of an identical ride position to the S 1000 RR is spot on. This is the only familiar aspect of the bike. Shane points out the traction control I can adjust on the fly, as well as the map adjust switches, then rips off the tyre warmers and off I go, every single person in pit lane staring at the bike and secretly hoping I turn it upside-down, because that would be a story!

I growl out of pit lane and open the throttle to set sail down to Turn 2 and oh-my! I’ve barely ridden 200m and I’m already blown away – not by how mental it is, but the opposite. Its lack of weight makes the acceleration something special, but the incredible Brembo GP4 PR Monobloc brake calipers wipe that speed away so effortlessly, I know all my usual braking markers are useless, despite the power difference. 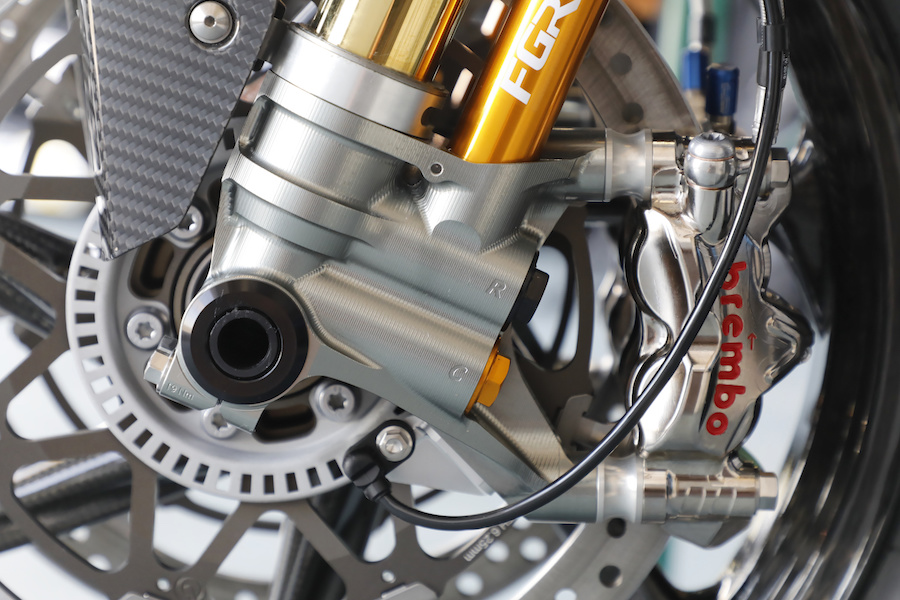 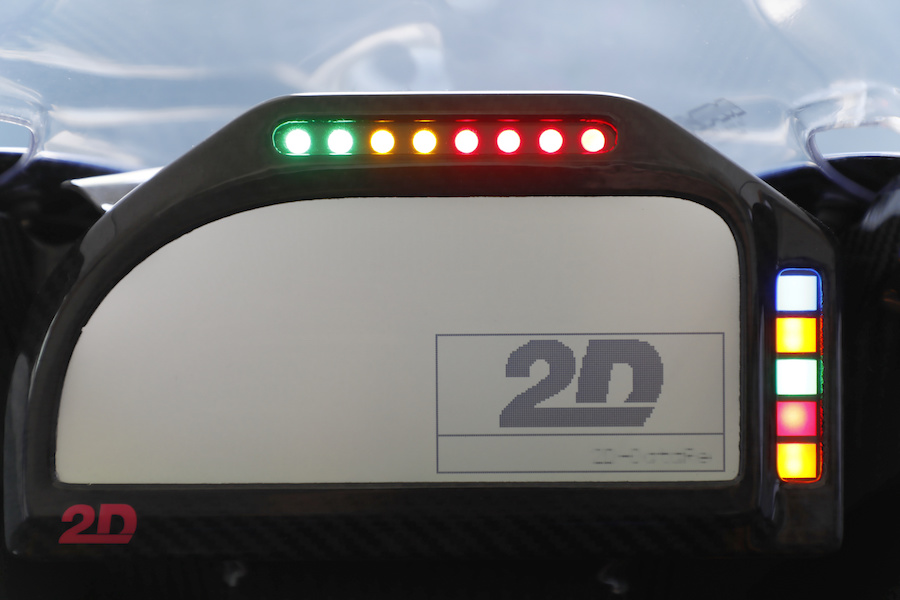 Suddenly I’m in the middle of Turn 2 and don’t really remember getting there. The HP4 Race stops and turns unbelievably, thanks to its overall lightness, but also the carbon wheels, which make the unsprung weight miniscule. The effort to brake and then turn against gyroscopic force simply isn’t there in comparison to other bikes.

As I get on the throttle, I hear the engine seemingly drop a cylinder as the traction control does its thing, so I open the throttle more and the bike just handles it all. I don’t feel over controlled by the ECU, it is just helping me go faster.

By the time the bike power wheelies onto the main straight, less than a lap in, I am laughing my head off. This bike is so damn good, it’s doing everything easy and I feel superhuman. The main straight feels shorter than usual and I know the fast Turn 1 is going to take some building up to… Three laps later and the elation is building, but so are the dark clouds and there’s rain on my visor, and I’m on slicks on someone else’s bike. I don’t want to get off, but I am keener to not bend this miraculous machine, so even though I watch one of my peers set off for another lap, I think ‘he’s braver than me’ and I head for the pits.

I pull into the pit garage and the BMW staff are appreciative I have, as the rain is harder now – and my fellow journo flies past again for another lap. The concern is palpable.

By the time he splashes past again, there’s a black flag pointing at him. Finally he arrives in the pits, totally oblivious to the panic he inspired. He’s a very good rider luckily – he knew what he was doing. Shame no one else did…

I only have one more session and thankfully it’s dry. Feeling more confident, I climb into the bike more. My first session the bike made everything easy, but now I am trying harder, it’s more physical. The acceleration out of the corners is insane and more often than not, the front wheel is hanging in the air, held there by the wheelie control. I chop the throttle by habit over the crest between Turns 3 and 4, which reminds me the bike does it better. 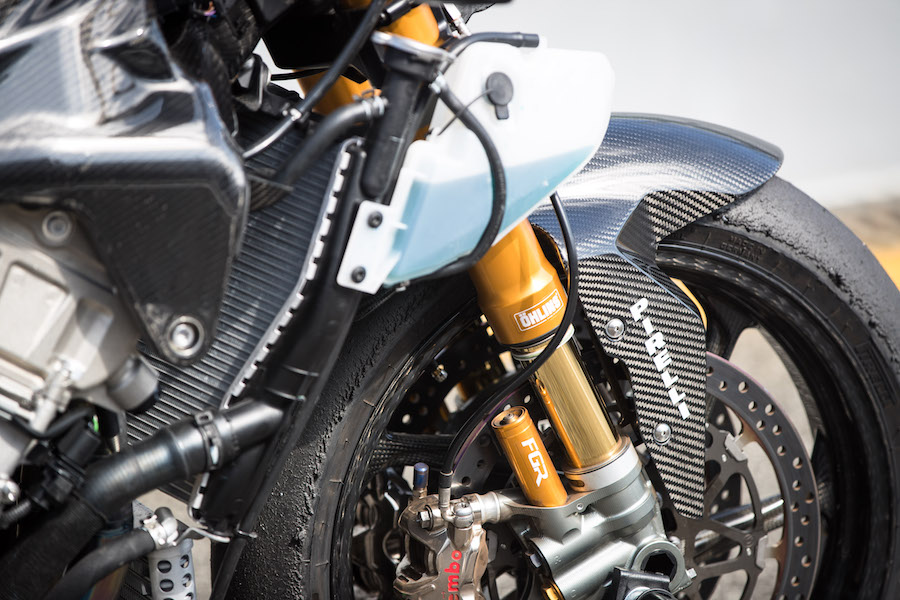 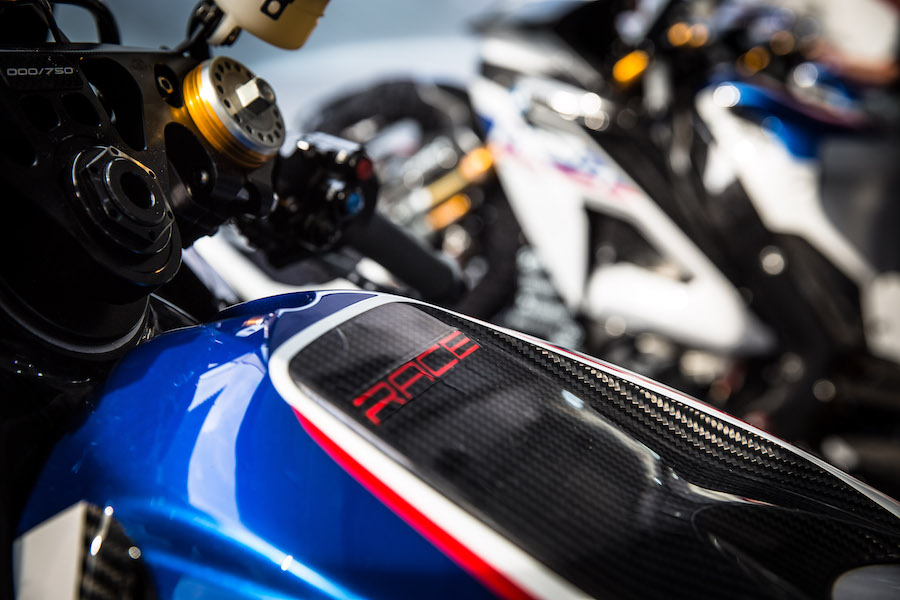 But now I have other traffic on track with me, and they aren’t on HP4 Race hardware. I exit Turn 12, all busy with power wheelies and slick power shifts and notice a bike ahead nearing the end of the grandstand, ready to enter Turn 1. The straight rushes past in a blur of howling in-line four, snappy gear shifts and I dive into Turn 1 and – there the bike is, parked mid track and with a frightening difference in corner speed.

I hadn’t been looking far enough ahead, you need look a long way on this beast… I think about the outside option momentarily, but realise I’ll run out of room, so push the inside bar and I slide a little rudely up the inside – there’s lots of room, the speed difference is the rude bit. That spells out the difference between this machine and anything with a numberplate, or even anything campaigning the ASBK series. 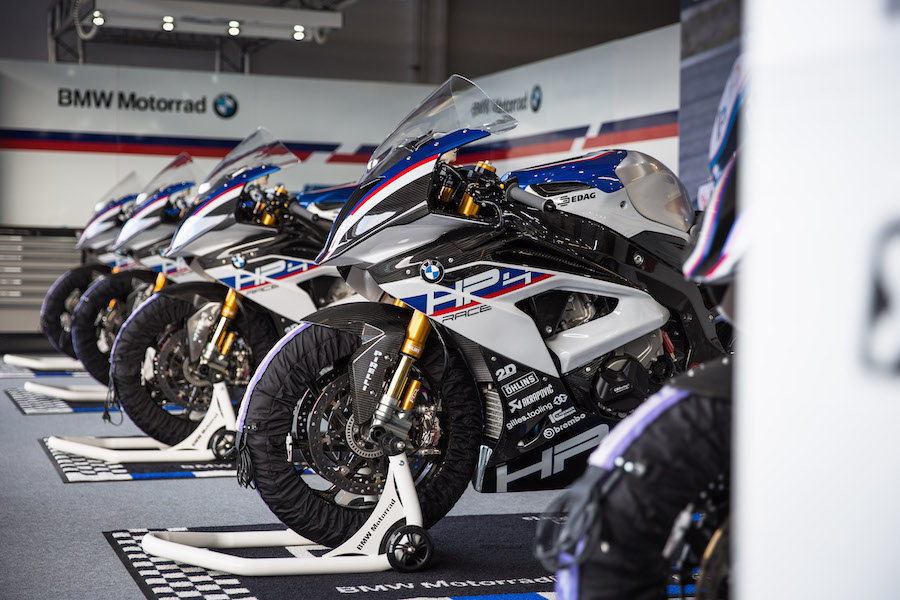 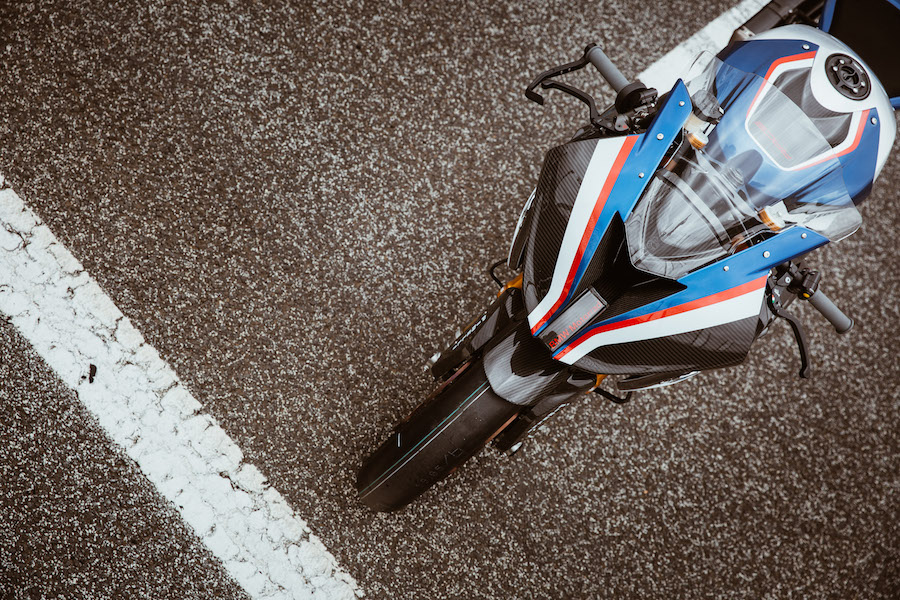 This is the best bike I have ever ridden. It begs you to try things you wouldn’t dare on something else. The electronics, which on roadbikes are often too intrusive, instead help you find another tenth, without taking out the fun part of that. Even if you aren’t into sportsbikes, you have to admire the single-minded mentality of this thing, not to mention the top-shelf parts and the way they work as a whole.

I’ve ridden many racebikes and roadbikes and trackbikes and this is head and shoulders above anything else, in execution and in meeting its design brief, but importantly, also how it makes the rider feel. It feels good riding at damp-track pace, but feels amazing when you start to rip into those slicks, as much as I did it with the ‘don’t crash’ warning light on, anyway. There is way more to this bike than is possible to cover in five pages, I could go on for months – it’s amazing.

Yeah, it’s a heap of coin, but if you want cutting edge of track bikes, you will sell your house to get this (only 10 are coming to Australia). It would be worth it.