PODIUM LOCK OUT FOR YAMAHA IN JEREZ | MotoGP

If last season hinted at it, this race confirmed it: this guy is for real. 2019 saw Fabio Quartararo (Petronas SRT Yamaha) repeatedly run into the immovable force that was Marc Marquez. But here, at the first ever Grand Prix of Andalusia at Jerez, the Frenchman showed he is only too happy to step up and take centre stage in the reigning World Champion’s absence.

This was domination of the Marquez variety. Fresh from becoming the eighth youngest rider in history to win a premier class race a week ago, Quartararo smiled, shrugged and vowed to attempt it all again on Thursday. He was good to his word, snatching pole position on Saturday, leading the race from start to finish on Sunday, and setting the fastest lap along the way.

Never mind having his face on the front page of France’s major sports daily L’Equipe or receiving congratulations from soccer star Kylian Mbappe, his country’s most prominent athlete. Quartararo’s focus is such that the 50 points next to his name in the championship table is all that matters. Marquez, watching on during his first non-start since the end of 2011, will rightly be worried.

Up until Saturday afternoon the eight-time World Champion had threatened to hog all the headlines. Marquez’s return to Jerez on Thursday, when he passed a fitness test two days after undergoing surgery to fit a plate in the right humerus bone he fractured here on the previous Sunday beggared belief. He sat out Friday to recover strength, posted 18 laps in FP3 on Saturday morning and was only 0.999s off the fastest pace in FP4.

But even this was one challenge too far for MotoGP’s very own bionic man, who had to withdraw from the event one lap into qualifying.

That seemed to spur Quartararo on. His ability to make things look this easy (when 25 laps around the Jerez’s draining layout in track temperatures of 59 degrees is anything but) was almost as impressive as the result. Pol Espargaro (Red Bull KTM) called this “definitely the toughest race of my career.” Renowned fitness freak Maverick Viñales (Monster Energy Yamaha) felt his energy levels dropping mid-race. Franco Morbidelli (Petronas SRT Yamaha) said the conditions as typical of Jerez – but “Jerez on steroids.” A paltry 13 finishers pointed to this being a war of attrition.

But the difference was each of those riders were in the heat of battle. Quartararo was running alone, making use of Yamaha’s new holeshot device to get the jump into the first turn and take advantage of that crucial clean air. By the third lap he was 2.1 seconds clear and running the wide, arcing lines that made Jorge Lorenzo such a formidable force on Yamaha’s M1. 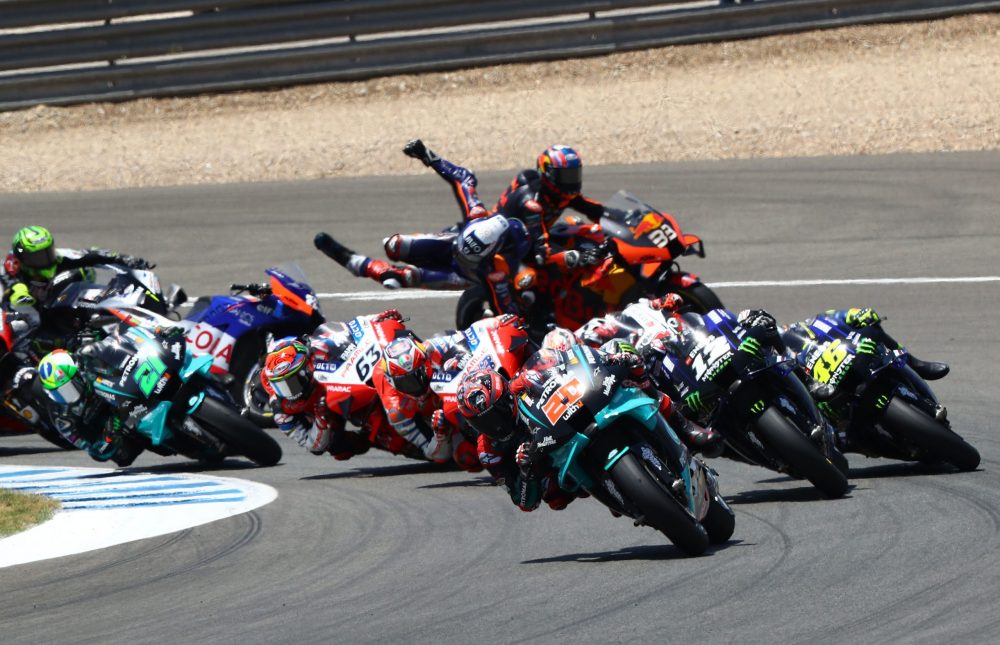 The only factor threatening his dominance was the unreliability of Yamaha’s 2020 engines, which caused Valentino Rossi to retire from the first race of the year, and Morbidelli out of this one. Thankfully for Fabio, they weren’t evident on his side of the garage as he cruised to a 4.4-second win.

“When it was half race I look how many laps remaining and there were twelve,” he said. “It’s this kind of moment when you can do easy mistakes. You need to be really focused. It was not easy, but actually I’m impressed because I could manage a bit better to stay more focused than last year. That’s why I’m really happy about my race today.”

With Quartararo checked out, it was up to the chasing pack to provide the drama. They didn’t disappoint. The leader of the race and the presence of Francesco Bagnaia (Pramac Ducati), Morbidelli and Takaaki Nakagami (LCR Idemitsu Honda) in the podium fight hinted at a changing of the guard and a young, exciting future. All but for one name: Rossi.

From the first turn the 41-year old was rejuvenated and riding beautifully. Fifth place qualifier Miguel Oliveira (Tech 3 KTM) was tagged by Brad Binder (Red Bull KTM) in a first turn melee, but by then Rossi was already ahead, defending against Viñales’ attempts at going with Quartararo. By midrace the Catalan had frustratingly dropped back to fifth such was the rising temperature of his front tyre, a danger of following any rider closely in these temperatures.  “I needed to change the plan. Every time I was close to Valentino, I could not stop the bike so I decided to give a little bit of room, trying to cool down the tyres.” 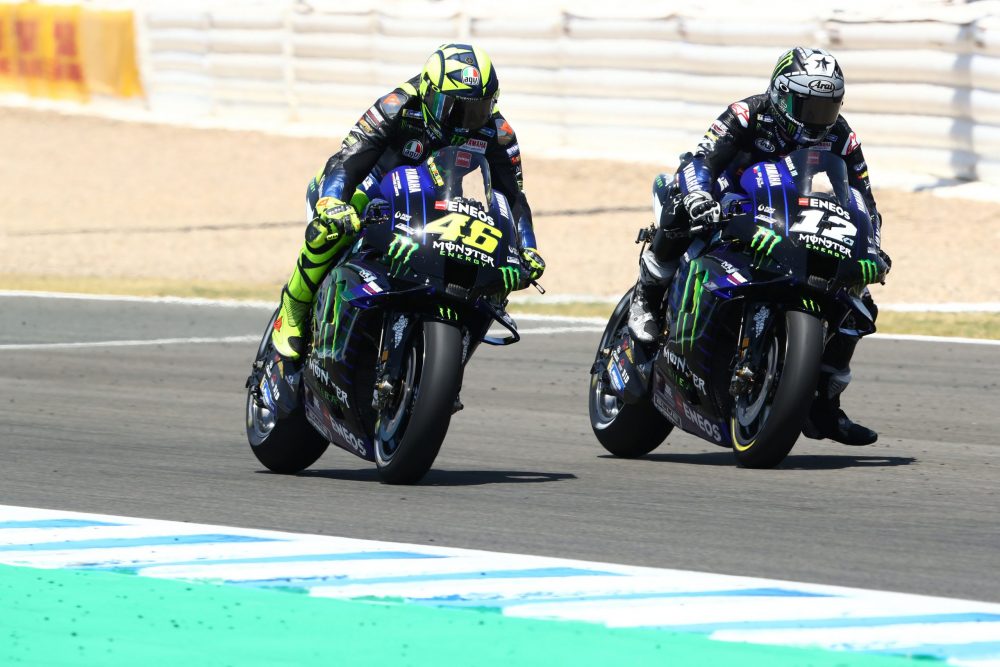 The Pramac Ducatis of Jack Miller and Bagnaia were offering glimpses of Ducati’s possible future in fourth and fifth. By lap nine the Italian’s pace was apparent as he first passed Miller before taking Viñales a lap later. As Miller attempted to follow suit he crashed out when braking for turn nine, a sad end to a certain podium challenge. “I decided to be calm through Turn 9 but as soon as I released the brakes I lost the front,” he said. “It was a nothing crash but costly.”

Bagnaia wasn’t satisfied with third. He ghosted his mentor Rossi for two laps before taking advantage of a rare mistake at turn six to ghost by. From there he was matching the leader’s pace, albeit 4.5 seconds back. He could have been joined by countryman and fellow VR46 Academy member Morbidelli who was within range of Rossi in third when his engine popped on the front straight starting lap 17. “I just felt the engine wasn’t going any more and I shut the bike because I didn’t know what was going to happen,” he shrugged.

A lap later and Bagnaia’s Ducati GP20 began smoking. Despite circulating for two more laps, the same fate would befall him, a devastating end to a breakthrough ride and a certain second place. “I started feeling that the bike was going a little bit slower and then I saw that it was smoking,” said the 23-year old. “I’m a little bit sad but looking at our weekend I’m happy with the work done.” 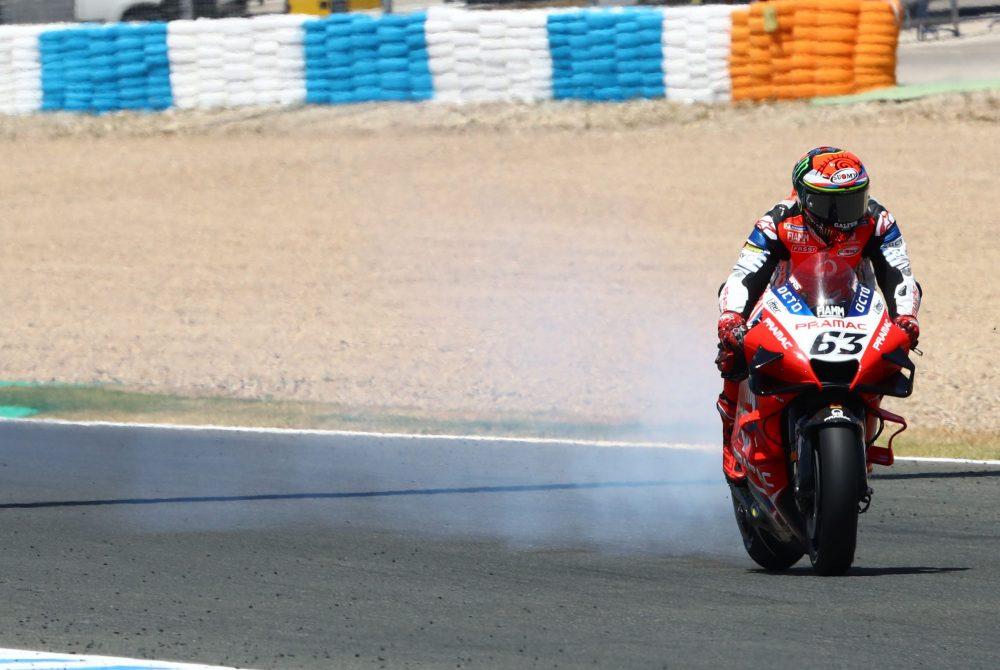 By then Viñales had cooled his front tyre and regrouped. For six laps he stalked Rossi before expertly dispatching his team-mate at turn ten on the penultimate lap. Contrary to his comments, a second runner up spot in as many weeks had a bitter taste. All weekend Viñales showed the pace to win but once again he crumbled in the heat of the battle. “My race was very complicated, but after a bad start I started to calm down, to concentrate and get the maximum out of the bike.”

Rossi held off a resurgent Nakagami for third, his first podium in 465 days. “It’s really special because coming from last week that was a very bad weekend, was very frustrating, but was not just last week. It was the major part of 2019. From Friday morning we do something different. Already from the lap three I feel better. I feel a better bike for me, a better position in the corner. Something more for my style.” His climbing of the trackside fence and waving at an empty grandstand on the cooldown lap showed he has lost none of his sense of humour.

Behind, Nakagami scored his best premier class finish with fourth, and Joan Mir (Ecstar Suzuki) equalled his with fifth, 1.5 seconds back of the Japanese rider. It proved a frustrating weekend for Andrea Dovizioso (Ducati Team) in sixth, who was made to pay for a lousy 14th place in qualifying. “From the first lap I didn’t have the front feeling in the middle of the corners,” he said. Pol Espargaro was a disappointing seventh after a continual fight against the temperature. “I had the feeling at mid-race that the heat was beating me.” Alex Marquez (Repsol Honda) took a first top ten as a MotoGP rider in eighth, with Johann Zarco (Avintia Ducati) ninth. Alex Rins (Ecstar Suzuki) was a heroic tenth just eight days on from suffering a dislocation-fracture in his right shoulder.

After two races Quartararo (50 points) holds a ten point advantage over Viñales (40). Dovizioso (26) remains third despite his disappointing result with Nakagami and Pol Espargaro tied on 19. Rossi rises to sixth with 16 points to his name. 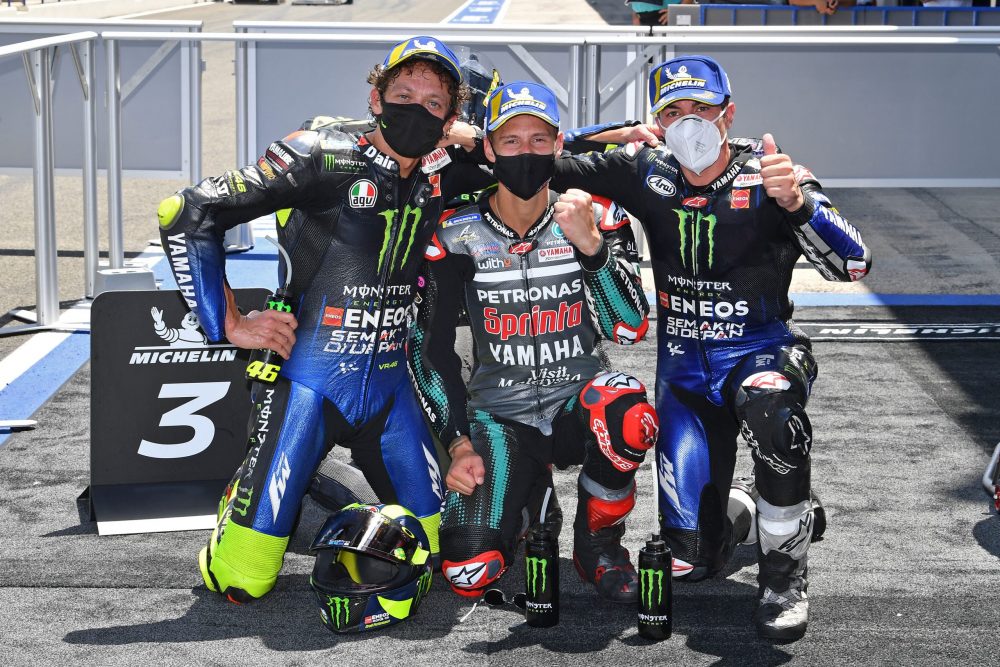 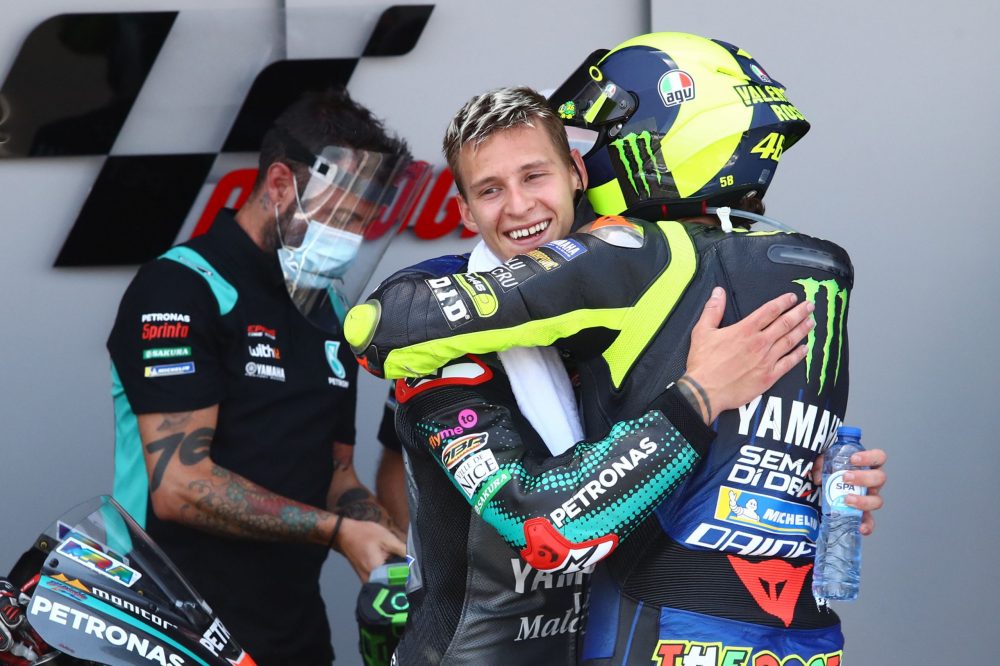