The Mission Winnow Ducati rider not only defeated team-mate Andrea Dovizioso but also had to fend off the fiercest of final attacks from championship leader Marc Marquez (Repsol Honda).

He succeeded by just 0.043 of a second, after the three of them sandwiched together through the first corner, where Marquez had taken a short-lived lead on the way in.

Dovizioso was the loser in that encounter, missing his own chance, and having to fight off the hard-pressing Alex Rins (Ecstar Suzuki) as he claimed third, still just two tenths adrift. The first four were across the line in just over half a second, after just short of 42 minutes of relentless hand-to-hand combat. Jack Miller (Pramac Ducati) had also been part of the group, but crashed out straight after setting fastest lap, on the 16th of 23 laps.

In fact the front gang had been even bigger. At half-distance, the top 12 were covered by barely three seconds.

Conditions were hot, making tyre preservation an important factor, and punishing both Petrucci and Marquez, who were still recovering from ‘flu attacks. “It’s unbelievable, in the best place in the world,” said Petrucci. “I have to thank my family and my team, and also Andrea Dovizioso for helping me through the winter. He helped me like a brother, opened the door of his house, and gave me all the secrets. I am sorry that I beat him today.”

Marquez was happy with second. “It was a race to defend, so I stayed calm for the last lap. Unfortunately I missed the apex into the first corner, and they both attacked me. But I am happy with 20 points here.”

Dovi was of course disappointed to be third. “I did the right overtakes in the right time, but unfortunately you saw what happened in that corner. I had to pick the bike up and I lost the position. That was the bad part of the race. But I am happy for Ducati and for Danilo. He needed that result for his future.” (Petrucci is fighting to stay in the factory team.)

Rins’s fourth was another strong ride, underlined by a fierce attack in the early laps after starting from the fourth row of the grid. He joined the leading group after only five laps. His last victim had been Cal Crutchlow (LCR Honda); who was left to fend off the on-form Pecco Bagnaia (Pramac Ducati), until the Italian crashed out on the 12th lap.

Crutchlow would continue to lose ground, dropping to eighth in the closing laps. By the finish his team-mate Takaaki Nakagami (LCR Honda) had taken fifth, staying a second ahead of Maverick Vinales (Monster Yamaha), through after finishing the first lap 12th after another poor start. It was a great race, really enjoyable though a bit scary. With ten laps to go Danilo was pushing the pace and opened up a gap. I wanted to get past Rins, but that Suzuki can turn on its armpit. I released the brakes a bit early and had too much lean angle, and I was down. I felt really comfy in the group; I’d like to have made it a Ducati 1-2-3. It was a nightmare race for crowd favourite Valentino Rossi (Monster Yamaha), starting off with a lowly 18th-position start. He was mired with the backmarkers, and then dropped to last after a gravel run-off after a collision with Joan Mir’s Suzuki. He was still last when he fell off on lap eight. Alex Marquez made it two in a row for the first time since 2014 in Moto3, starting from the front row to take control of the Moto2 race after eight laps, then breaking the pursuit to get a lead of better than two seconds not long after half distance.

The EG-VDS rider headed an all-Kalex top six at the scenic circuit, and was able to relax by the finish to win by 1.9 seconds, having set a new lap record on the second lap.

“Here was a bit more easy than Le Mans,” he said. “We are in a good moment, and we need to keep the momentum.”

Thomas Luthi (Dynavolt Kalex) had been the early leader, but the Swiss rider, suffering a stomach infection along with a lack of tyre grip, said “It was impossible to attack today.”

That meant when Luca Marini (SKY VR46 Kalex) closed at half distance, Rossi’s half-brother was able to slip cleanly past at the Casanova-Savelli corner set for his firstxxx podium of the year. At the finish, triple 2019 race winner Lorenzo Baldassarri (Flexbox HP40 Kalex) managed to stay ahead, while team-mate Augusto Fernandez snatched fifth from rookie Enea Bastianini (Italtrans Kalex) on the run to the line. Seventh-placed Jorge Navarro (MB Conveyors Speed Up) had started the lap in front of both of them. Second Speed Up rider Fabio di Giannantonio was a strong tenth, coming through from the back after being involved in a first-lap tangle that eliminated Iker Lecuona and also delayed Xavi Vierge (12th) and Remy Gardner (13th). Italian teenager Tony Arbolino played the slipstreaming ghost to claim a first GP win in the first race of the day at Mugello.

The Moto3 Snipers Honda rider had started from pole, and came onto the final straight behind the erstwhile dominant rider of a huge pack, Lorenzo Dalla Porta (Leopard Honda).

Dalla Porta seemed to have it in the bag, until Arbolino ducked out of the draft to lead him over the line by just 0.029 of a second.

Spaniard Jaume Masia (Bester Capital KTM) was third, coming through from the back of a huge pack that had been 14 strong after half-distance, before a couple of crashes split them up.

There were still eight glued together, first to eighth over the line within six tenths of a second.

Niccolo Antonelli (SIC58 Honda) came through to fourth after starting from the sixth row following a post-qualifying penalty, setting fastest lap (just short of a new record) on the way through. 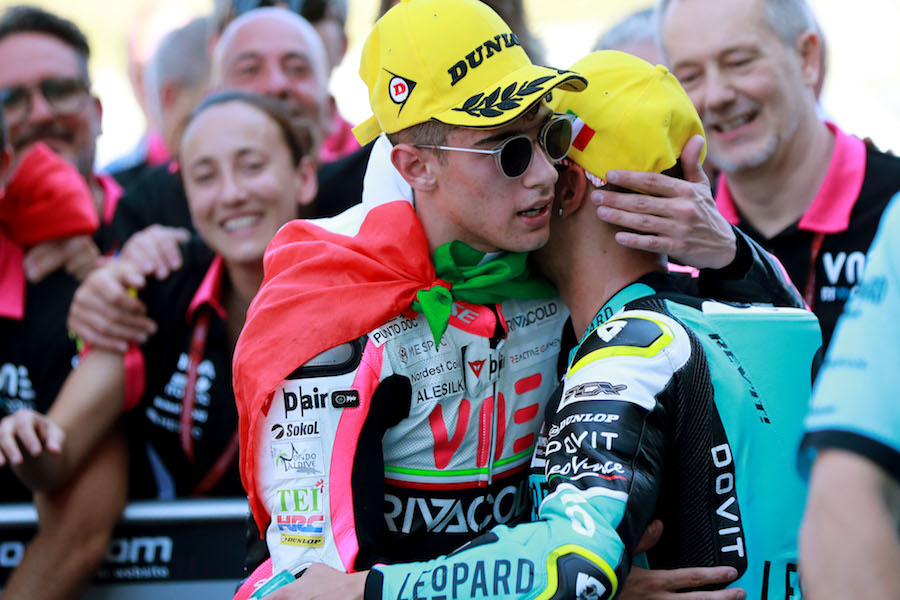 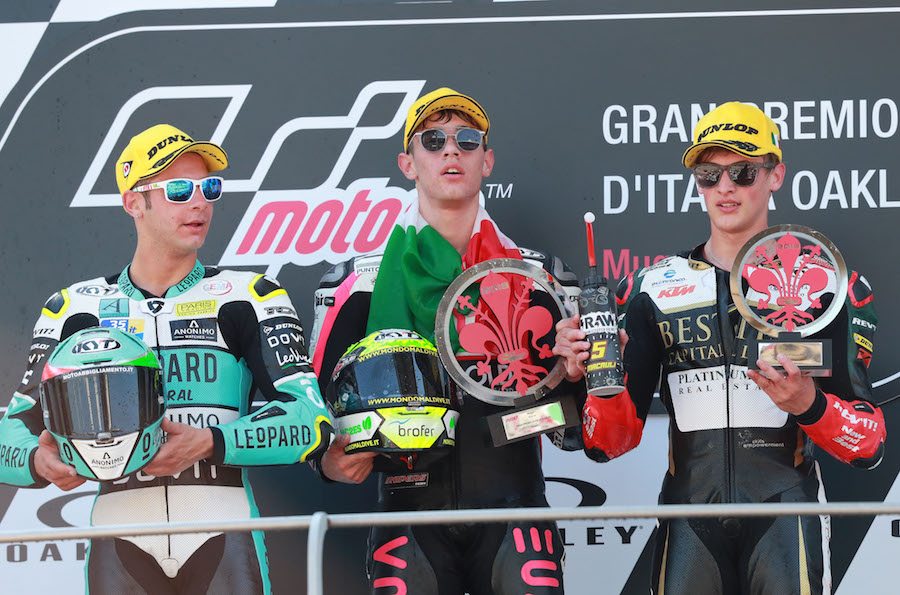