If you want launch a successful motorcycle business in a declining industry, you need to think outside the box

It’s belting down rain as we roll off the ferry at Queenscliff on Victoria’s Bellarine Peninsula and it’s not expected to get much better. I’m on my way to Geelong’s newest motorcycle dealership called Nevermind which is Victoria’s only exclusive Royal Enfield dealership. It also happens to be a tour company – I’m booked into their Great Ocean Road tour which promises to unlock some secrets of one of the most iconic roads in the country – and, perhaps bizarrely, the whole concept grew from selling leather bags.

“It sort of started by accident,” explains dealer principal and Nevermind Adventure owner Matt Natonewski. “I ended up studying environmental science, that took me to Western Australia consulting on the environmental impacts of mining, but I got sick of that about five or six years ago and walked out. I needed to reassess.”

To make ends meet, Natonewski began selling leather bags which he was making in India. He’d travel to the south east Asian country regularly and started sponsoring a primary school set up for disadvantaged kids located just near the country’s famous Taj Mahal. 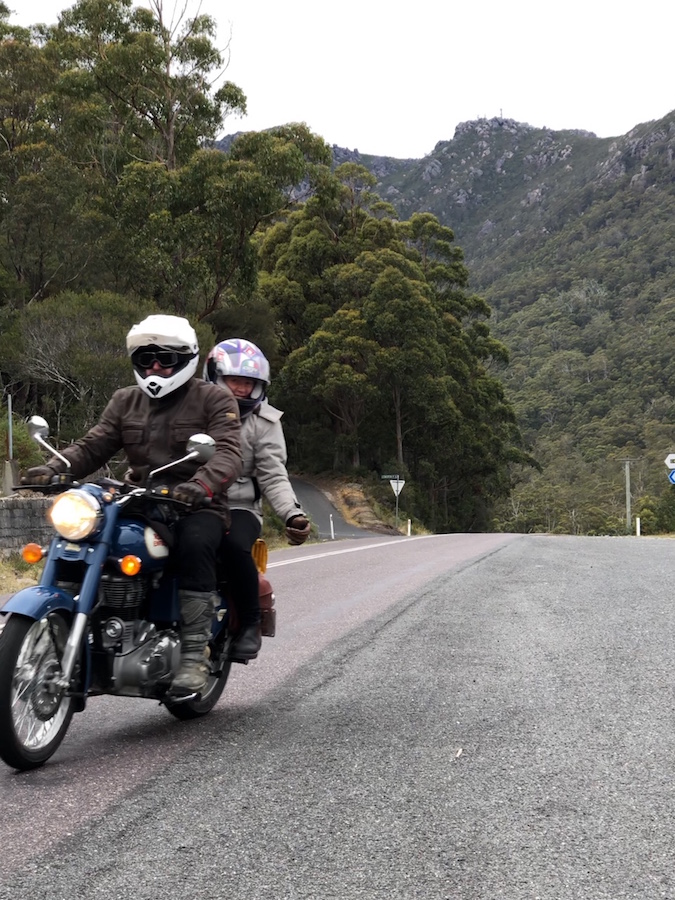 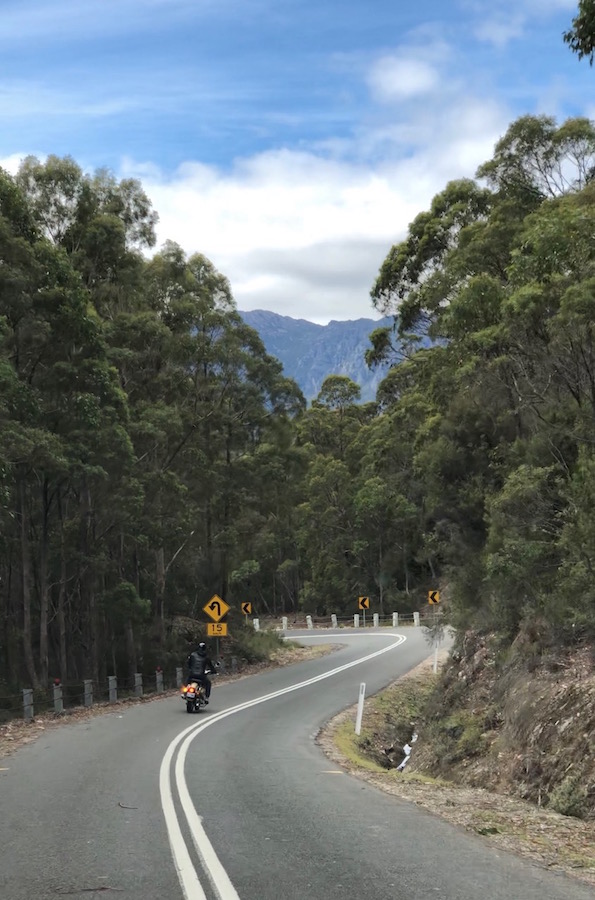 “I was always riding Royal Enfields over there and, just through talking to people, I started taking a few people over with me, then they started coming back and wanting more, and now we’re taking 300 people a year to India,” Natonewski continued. “So what started out as a bit of fun and as a way to fund our school and grow out leather business has sort of become out main business.”

It took me a couple of passes to spot the dealership. Partly because it was difficult to see through the rain and partly because it’s a rather small and unassuming building, quite different to the conventional bike shop we’ve become used to today. We were due to depart at 9am sharp, with participants arriving early enough to get acquainted, briefed and appropriately attired for what would be our 300km magical mystery tour of some of the state’s most rideable and picturesque roads.

Two couples, a father and his two adult sons, myself and our tour leader Bryan took the total number of riders in our group to a very civilised nine and, despite almost all of nudging just under or well over the 40-year-old mark, I couldn’t help but notice that a high majority of the participants were learner or provisional riders. Though I knew with a man of Matt’s vision, it wasn’t likely to be a coincidence. 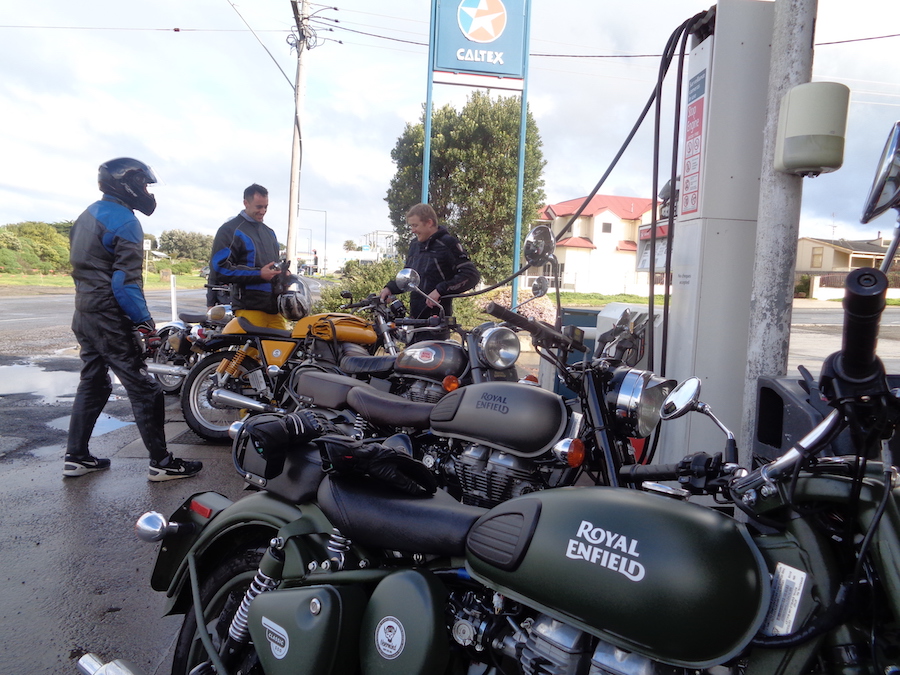 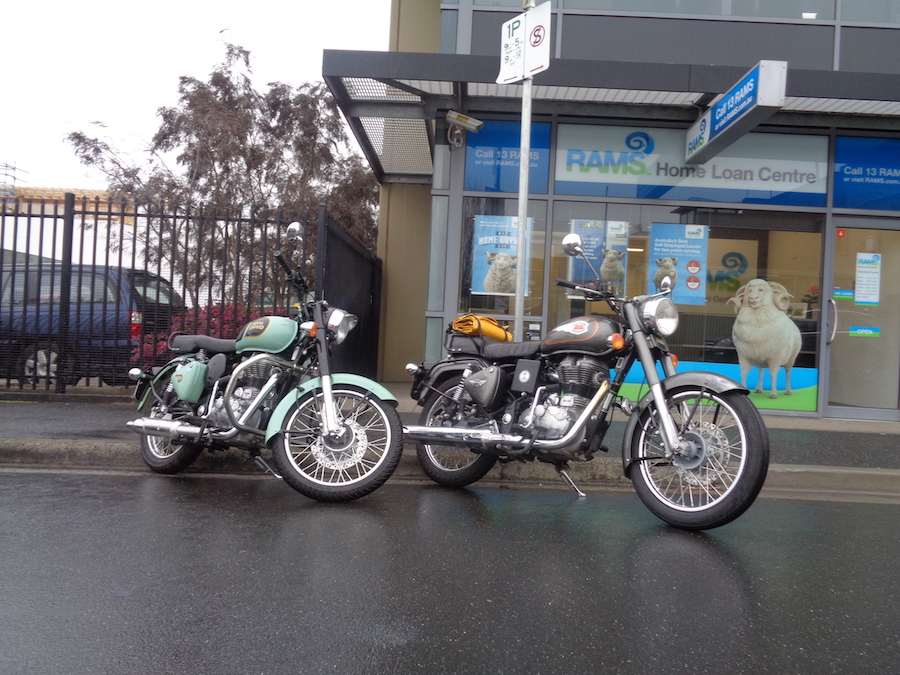 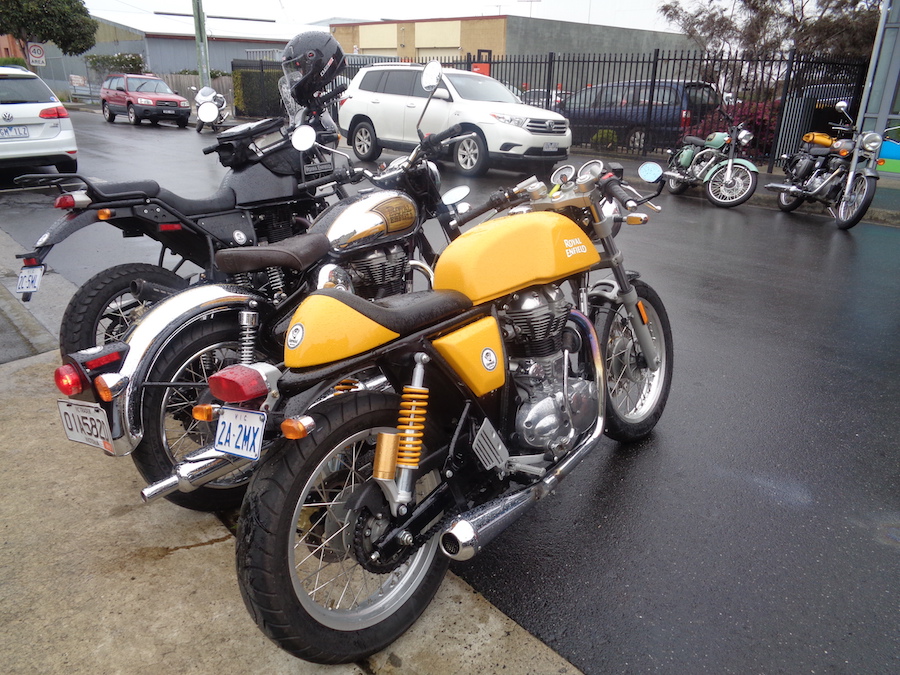 “I didn’t want to compete with the likes of the other bike shops and tour companies, we wanted to create our own audience and create our own customer base – and what better way yo do that than to get new people onto bikes,” Natonewski offers.

Today, if you book into one of the firm’s 13 different tours offered across India and Victoria, as well as Tasmania, Nepal, Vietnam and Pakistan, and you get a two-day Stay Upright learners course and the Great Ocean Road tour thrown in for extra practice. It’s a clever initiative which promotes brand loyalty and guarantees future involvement.

“You know, the retail motorcycle industry is dominated by a few very big players,” Matt continues. “The smaller bike shops are nearly all gone. When I was a kid in Geelong, there were 12 independent motorbike shops, now there’s two. The big boys have come in and taken over and I wonder if it’s good for the industry – you can’t get a good deal, it’s hard to get good service, there’s no competition.

“But banks do not support small business in Australia despite what the advertising says, and we got to the point where we needed some funds to keep up with the rate of growth of our business.”

Not surprisingly, the learner packages aren’t the only thing Matt and wife Anna are using as a tool to promote loyalty and guarantee involvement. And it’s a concept which is relatively new in this country called equity crowdfunding. By now moist of us are familiar with the crowdfunding model where are lot of people donate a little bit to raise funds for a business venture, but equity crowdfunding sees donors purchase into the brand, rather than just donate to the cause. 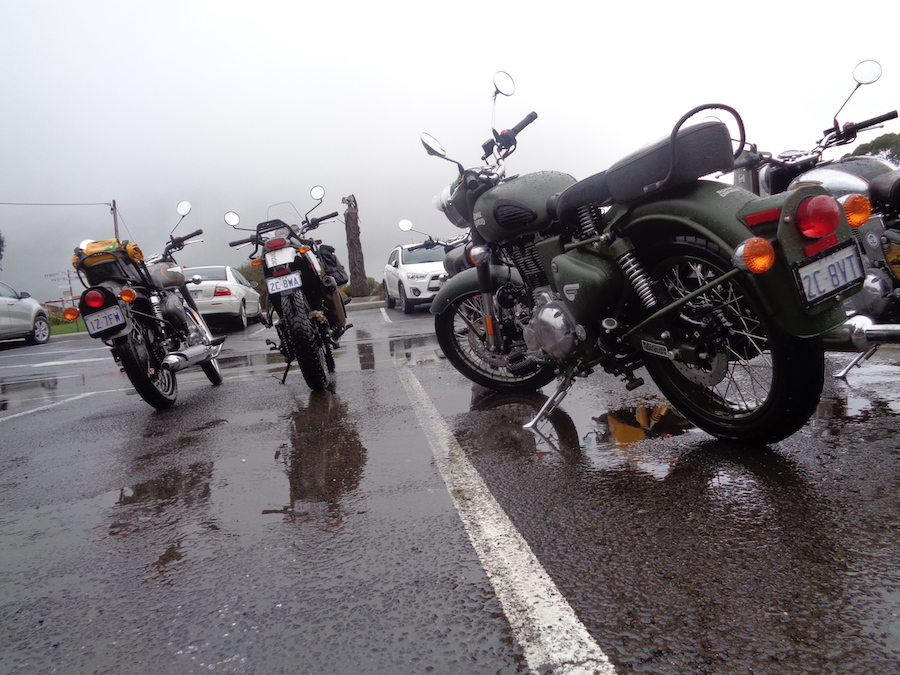 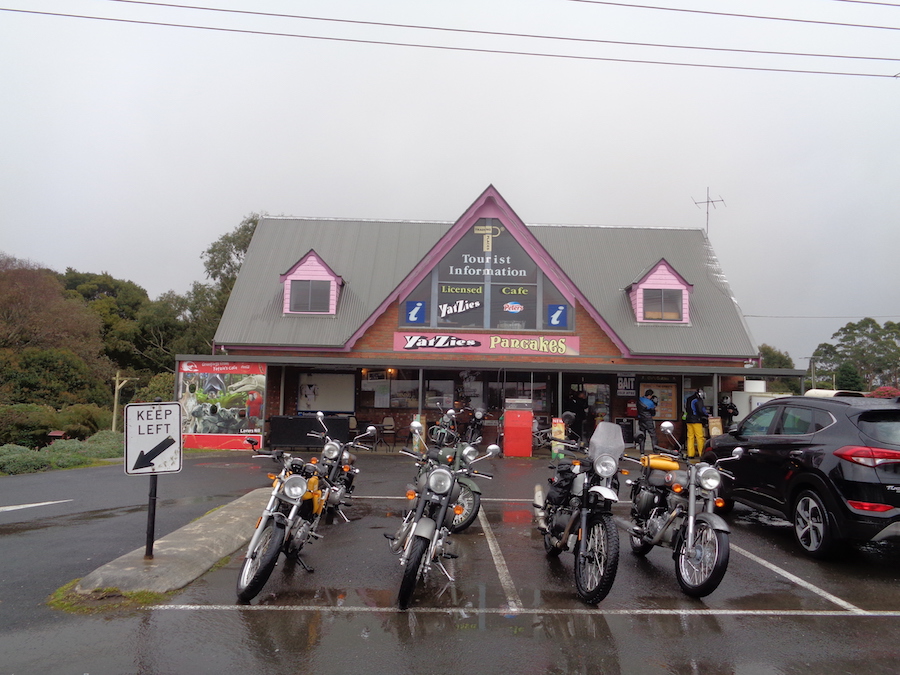 “It’s a great way for us, with such a big community – we’ve taken 3000 people to India over the past five years, plus all out local riders and customers – so it gives people the opportunity to share in our business and help us grow it, and then share in the rewards.

“This is a way that the motorcycle community can say, okay we want to have some smaller independent dealers who can offer far better service than what the bigger boys can.

So when you’re doing a motorbike tour with us, you’re actually supporting your own company, it’s a great win win for us. And you can invest from $100, it’s not like we’re looking for million-dollar investors so it’s accessible for everyone.” 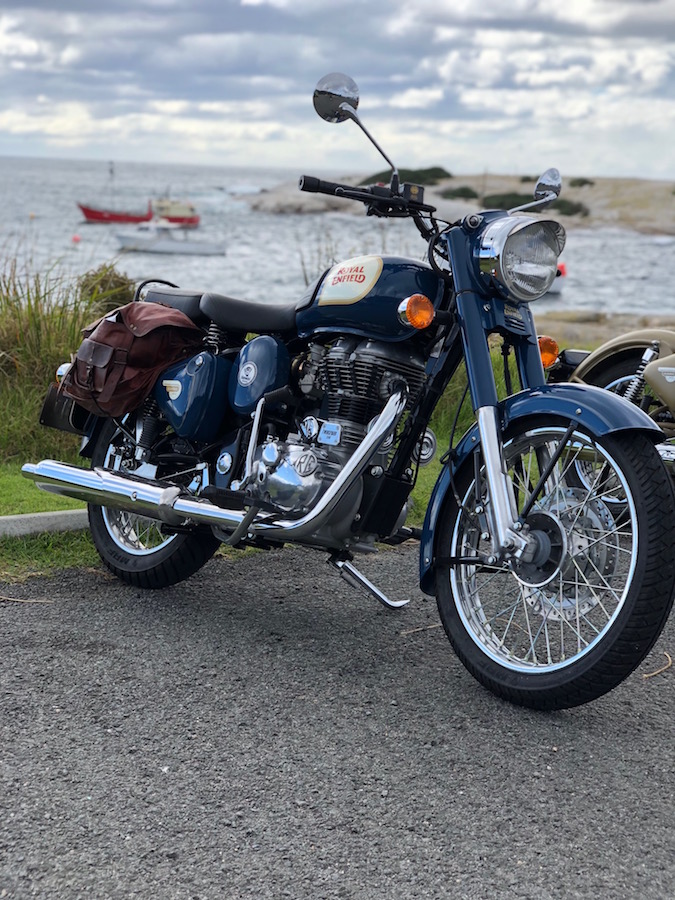 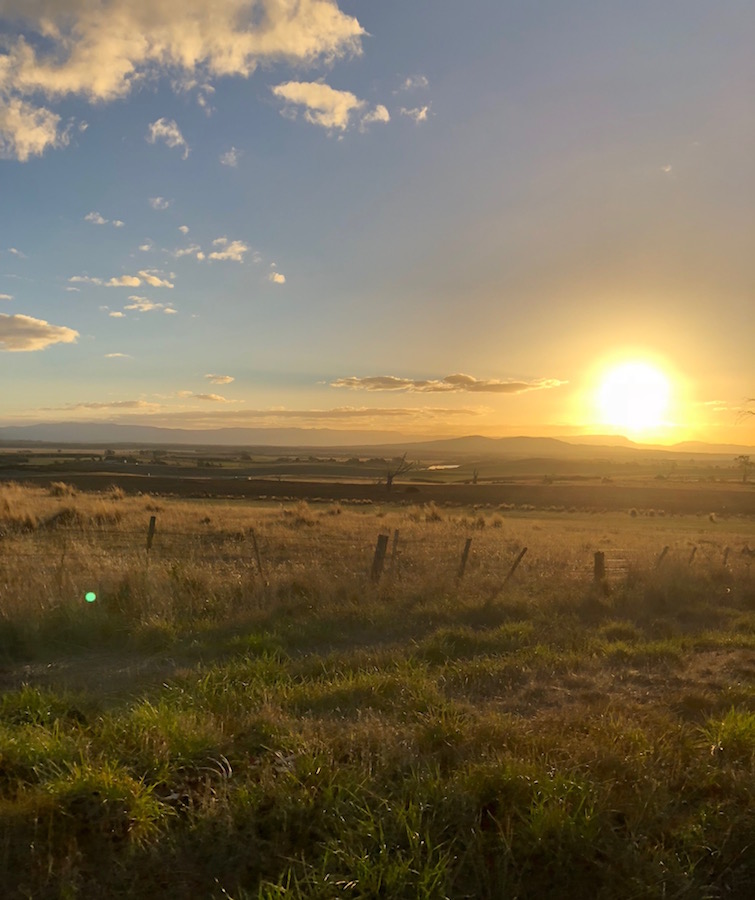 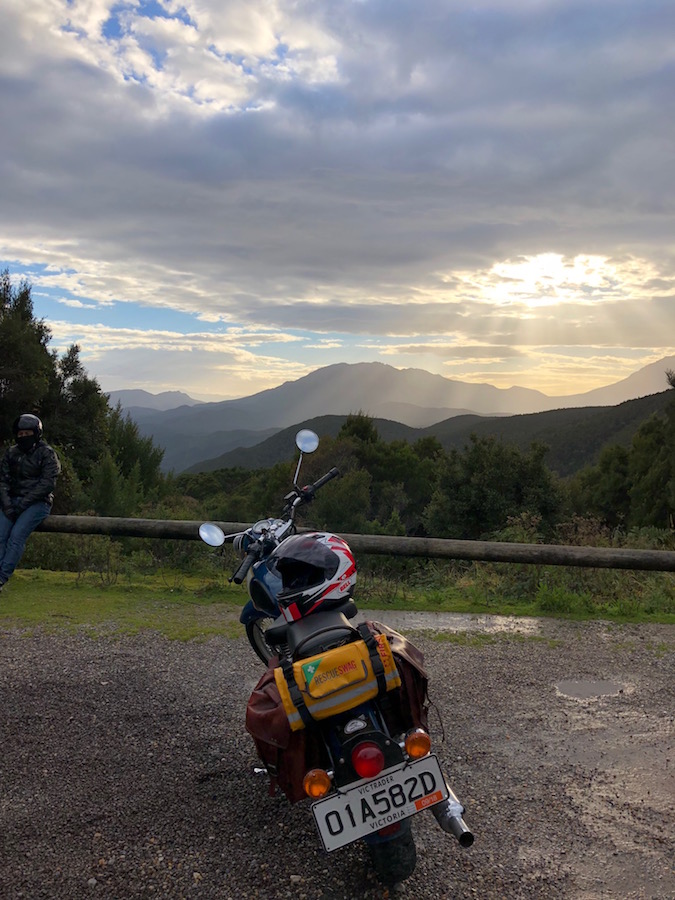 As we splash our way out of suburbia, I can’t help but think that Matt and Anna are not only thinking outside the box in a bid to grow their own interests, but by targeting new and even non licensed riders, they’re also giving back and growing an otherwise declining industry. In fact, the entire ethos of the Nevermind, well, adventure is summed up in a beautifully shot 44-minute documentary Matt and Co. shot last year in India called Moto Mahila, which follows the journey of three very normal middle-aged Australian women who gained their licences to join the firm’s 10-day Rajasthan tour. Created to illustrate that really anyone can give this motorcycle lark a go, and if Lisa, Deb and Linda can do it in the humid and sandy bustle of India – the later who had never left the shores of Australia before let alone travelled anywhere without her husband – then anyone can damn well do it. 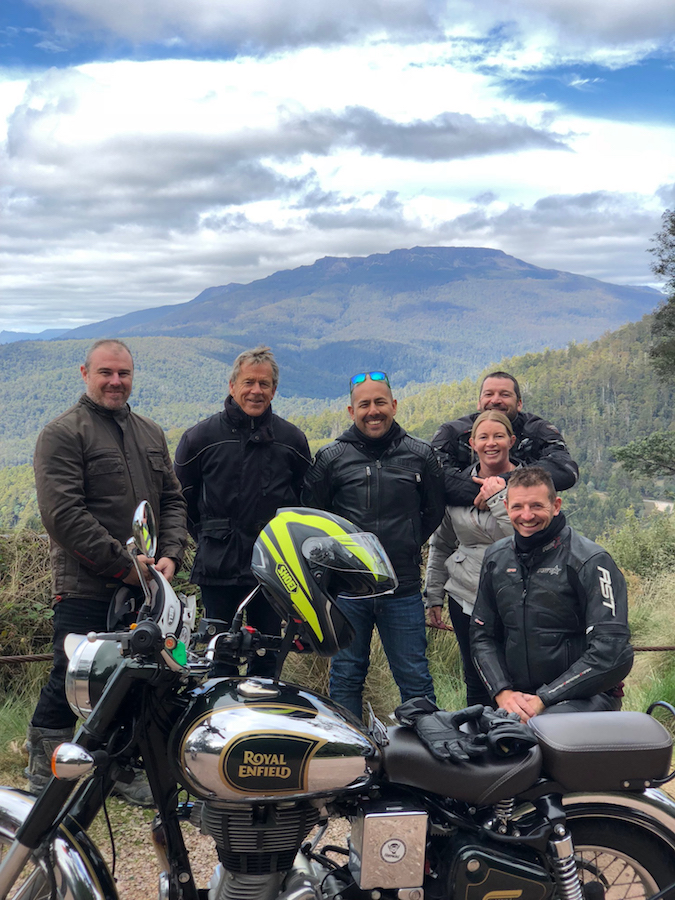 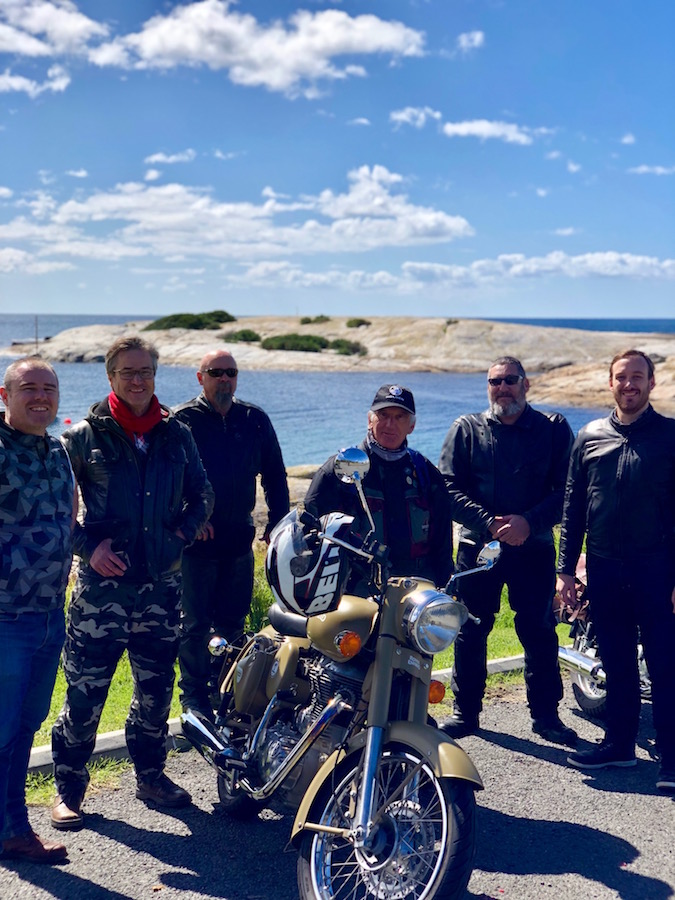 The two wives which formed the Great Ocean Road tour I’m on have both just graduated from the two-day course offered in Nevermind’s package. And for both of them, it was the first time they’d ridden in the rain. But unlike nearly all of the group riding I’ve done during the last two decades, where on-bike boasting and off-bike bragging tends to rule the ride itself and the conversations which accompany it, Nevermind manages to create a relaxed and confidence inspiring atmosphere. And the recipe is rather simple. It adopts the tried and true corner-man system to ensure no one gets left behind or lost, and the lead rider buggers off ahead and leaves everyone to their own devices – until a planned break or stop, of course. It means no one feels the need to keep up, no one feels as if they’re being watched and they’re given a real-world (and real pretty) environment to put all their recently learnt skills to the test.

My tour included a complimentary coffee and snack just before we got into the thick of the fun riding roads, a lunch stop at a very quaint tin shed in Ferguson which offered both a roaring fire and a delicious burger, and you don’t need to worry about fuel either (unless of course you were so excited about your said trip that you forgot to fuel up before you left, as one of our newest riders may have done). You can ride your own bike or theirs – they’re not brand-ist, so you can bring along whatever make or model you like – but if you’re using one of theirs, it’ll be a Royal Enfield, of course.

The Nevermind example, on so many levels, challenges the norm. It’s a bike shop, it’s a travel agency and its owners and employees are committed to putting more bums on bike seats. They’re very cleverly and successfully married a unique experience with a rather novel and, let’s face it, on-trend product. And for who has rolled through the world sitting atop a Royal Enfield motorcycle will know, there’s probably no better machine to do it with. 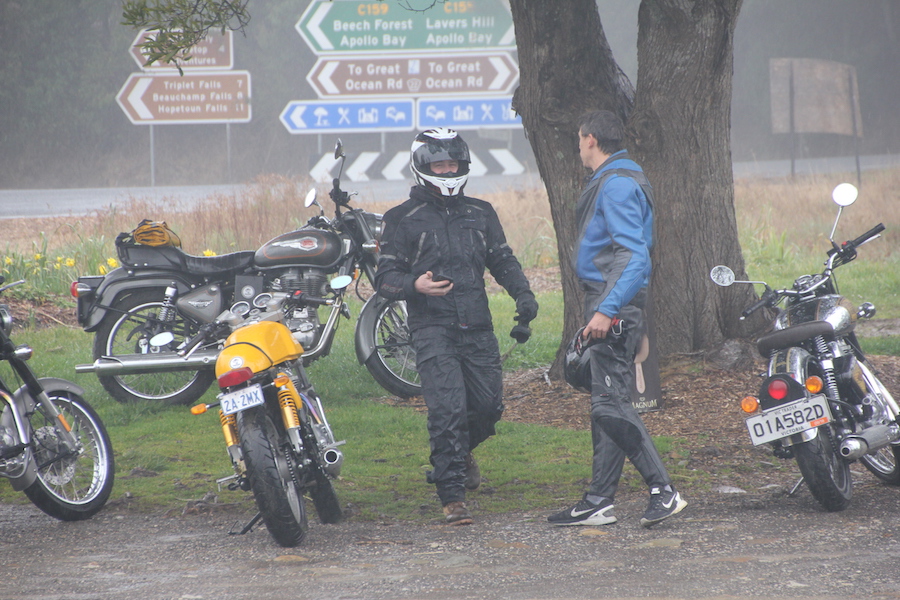 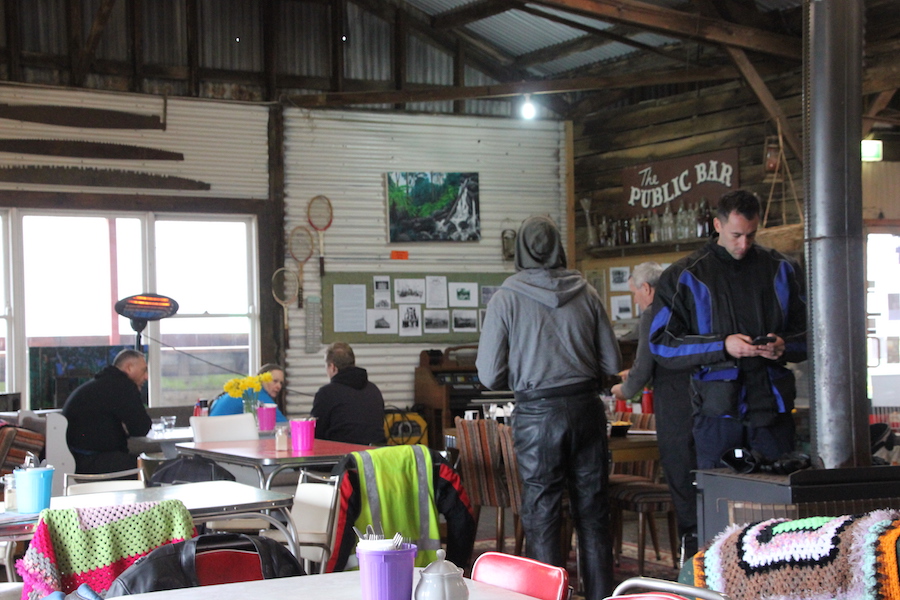 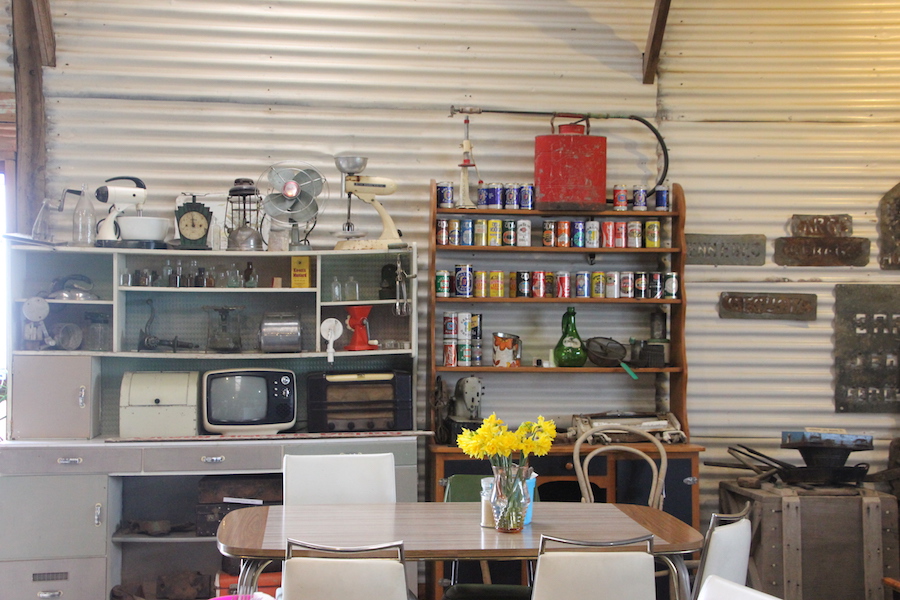 “India is really big for us,” says Matt. “We do about six tours a year up to the Himalayas, Rajisthan we do about the same – we only do it in the good seasons there. Vietnam has taken off, we’re doing about four or five a year, and Tasmania has just gone crazy! We only started that in February this year – we took a fleet of bikes down there and thought we’d see how it goes.

“We keep eight bikes down at Launceston airport and fly people down from Melbourne every couple of days. You can do a one-day trip or a three-day trip, then you fly home – it’s been a massive hit. Come winter, we’re looking at moving those bikes up to Brisbane and offering winter escapes up there, from Melbourne and Sydney.  We’ve got a full-time travel agent, so we’re tapping into the flight schedules, so you can fly from Melbourne to Brisbane in the morning, do a great six-hour ride and then you’re home in Melbourne the same night.” Brilliant. For more information, head to www.nevermindadventure.com 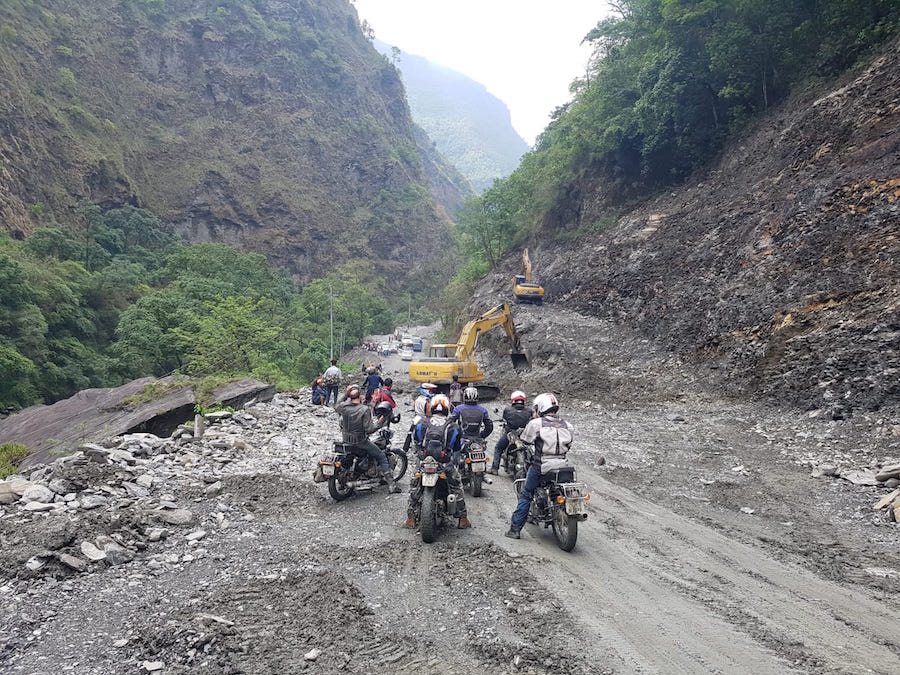 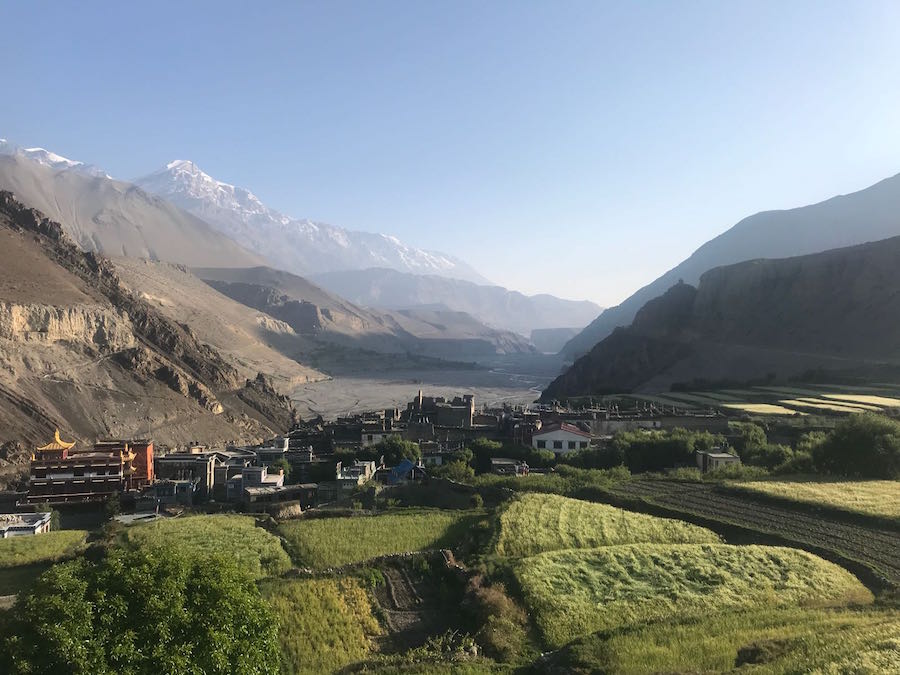 If you like the concept and want to support Matt and Anna, or just want to learn a little more about the equity crowdfunding concept, you can check it out at www.birchal.com/company/nevermind