If too much MotoGP isn’t enough, then this is the perfect book to get you through to the 2019 season’s curtain raiser at Qatar

MotoGP machines are special and so are their riders. Seventeen years and more than 290 races into the new four-stroke era, the technology is extraordinary.

Author Neil Spalding talks of bikes flying on the ground. In this book’s introduction he says these 270hp machines are “controlled by a rider under what would normally be considered combat conditions, and they do it with precious little overt assistance other than their own sense of balance and reaction speeds.”

Spalding has for the last decade and a half quizzed designers and race engineers, and patrolled pit lane at the grands prix, observing and photographing, to chronicle and explain machine development. A works team rolls out a chassis alteration during a  practice session or there’s a change in an exhaust system and he’s onto it, for the details and the why.

The story goes that some factories were so impressed with Spalding’s detective work they eventually showed him stuff. On the other hand, Honda managed right through 2012 to keep its new 90-degree V4 1000 design secret. The previous 800 had a having a 75-degree vee angle, but the RC213V had modesty panels to help hide the details.

Spalding does a good line in dry humour and the occasional stark assessments. See if you can match these quotes to the factories involved…

“It is fair to say that the (name) 2003 chassis did not heed the lesson (on chassis flex). The bike’s wheel spun easily, lacked traction coming out of corners and, if there was a bump anywhere in the middle of the corner, the entire chassis seemed to jump vertically up, clean off the ground. The bike wasn’t quite unrideable, but it must have been close.” And this on the change wrought by the adoption of control tyres in 2009…“It took (name) over three years to publicly concede that ‘the tyre designs the bike’ and it is arguable they never really understood the requirements of the tyres.”

Or…“After years in the wilderness, (name) had finally built a bike that had exactly the right weight distribution and flex for the tyres it was using.”

Spalding includes two detailed quotes from the late Warren Willing. One is Warren’s view on roll axis and the other on (controlled) bending in the chassis. Jeremy Burgess, long-time crew chief for Valentino Rossi, is also quoted twice. We note this because  the two Australians are among the few people directly quoted.

The book plots the development of every make that has scored MotoGP championship points since the new-era four strokes debuted in 2002 – from title winners Ducati, Honda and Yamaha to the Ilmor X3 ridden in 2007 by Andrew Pitt and Garry McCoy.

Spalding says it is relatively easy to lap within two seconds of the top teams, “but the level of understanding required to get that last little bit off the lap time is very high indeed.”

There are myriad facts and details to absorb in this book, from Ducati’s 800cc V4 revving to around 20,000rpm to a photograph of Jorge Lorenzo’s Yamaha resting on a prop, so it is leaning at 60 degrees while standing still. He couldn’t believe it. Marc Marquez has extended lean angles to 63 degrees.

Such lean angles create more problems for the chassis designers. “The same chassis that has to resist any twist and also deal with braking loads also has to provide lateral flex – to take some pressure off the tyres and maintain some grip at high lean angles,” Spalding writes. “The Japanese say the chassis should bend like a tree.”

Woven into the tech is Spalding’s appreciation for the riders, with honourable mentions for Troy Bayliss, Casey Stoner, Chris Vermeulen and Ant West. And then there’s this on Casey’s first championship in 2007: “As good as the Ducati was at maximising its performance within the rules, it is important to remember that it was Stoner who had to make it all work on the track, and that wasn’t always easy. Just ask yourself – where did the second Ducati rider finish.” 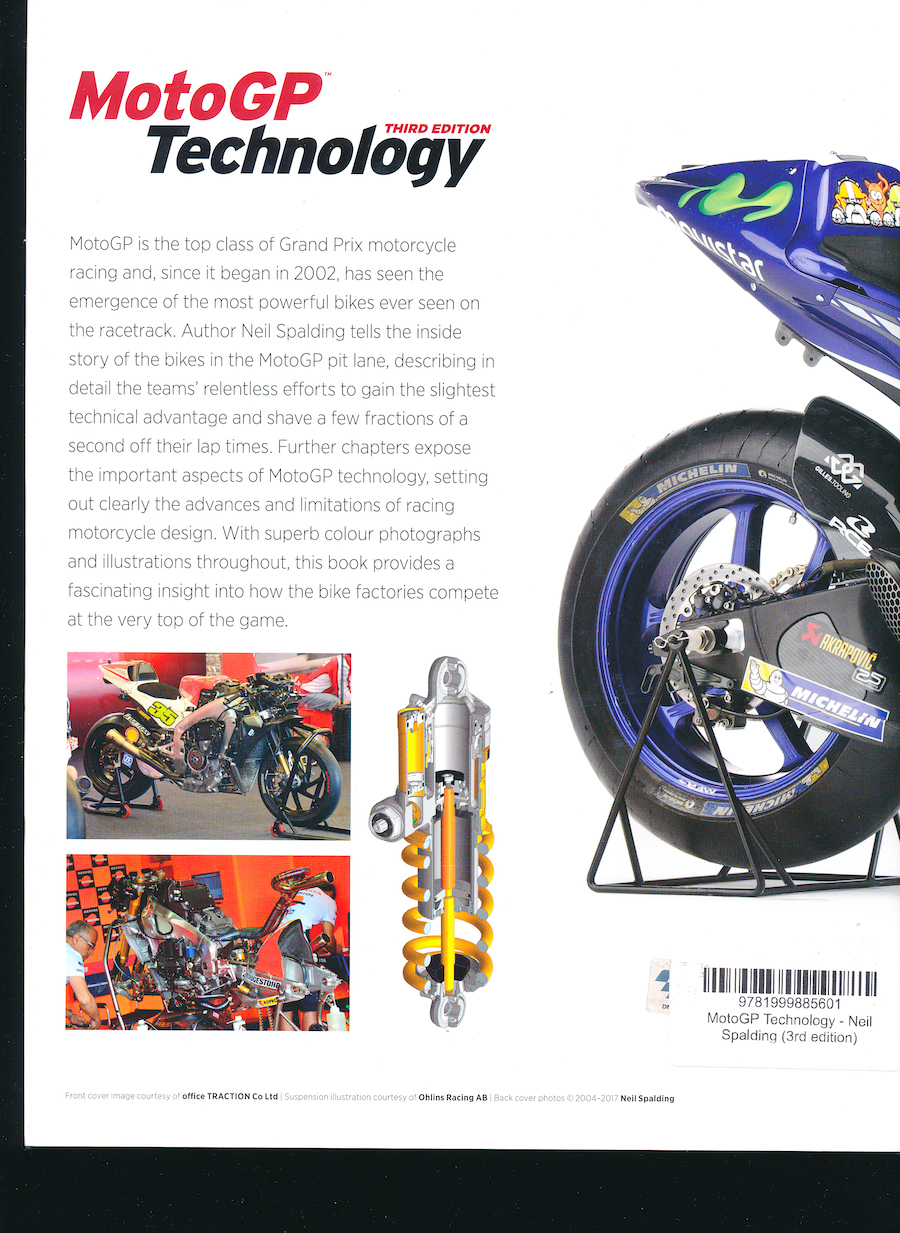 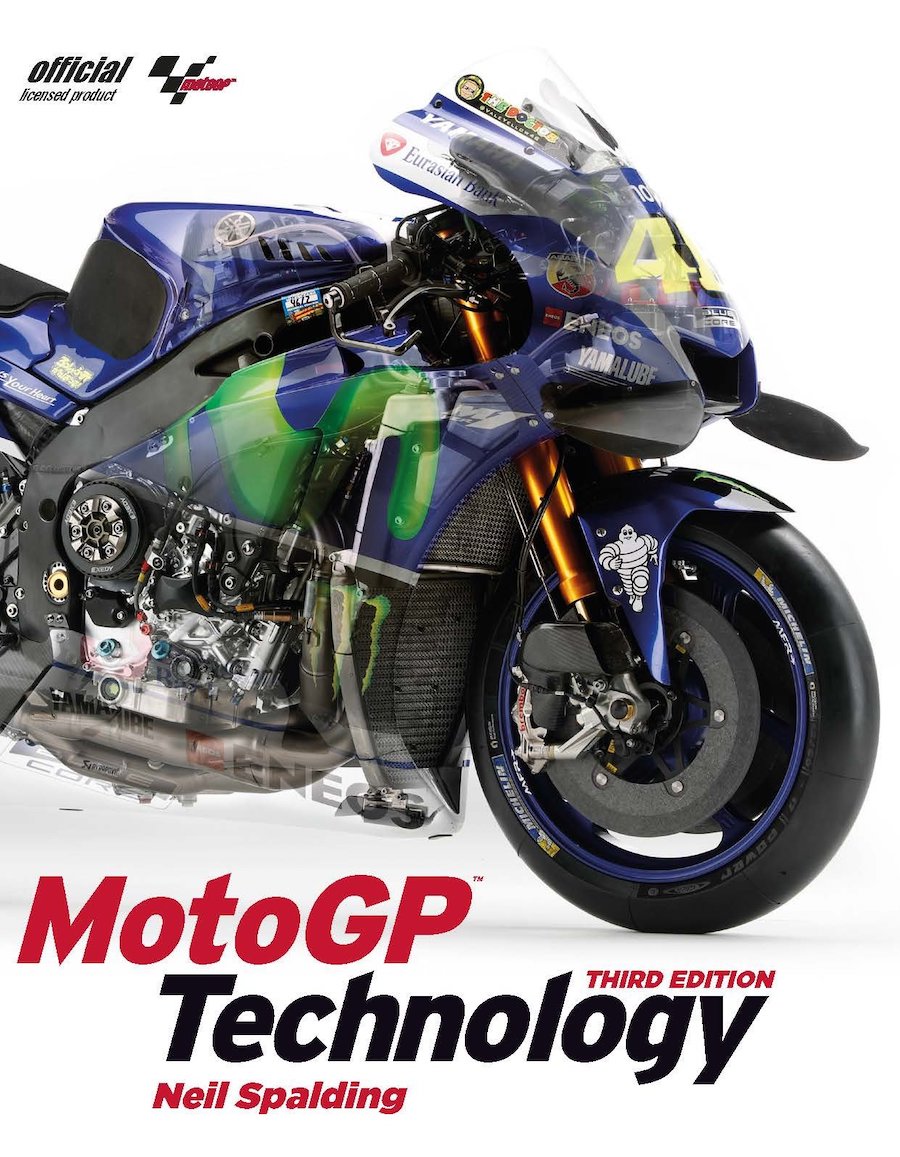