In an attempt to save our sanity and rekindle the spirit of the original Dumb and Dumber rides, we escaped the office and hit the Victorian High Country – on learner bikes in the middle of winter

AMCN’s current series of LAMS group tests came in response to the increasing market share of learner legal bikes. It got us wondering how many of these new riders are experiencing all the fun that motorcycling has to offer. You don’t need the latest and greatest – or even necessarily a bike that fits into the stereotyped riding genres of touring or adventure – to have a go at a ride that will challenge your skills, expand your horizons and open up a world of adventure – LAMS adventure. If you’re not in on the action, you should be!

The plan was simple. Three teams of two riders, all setting out at dawn from Warburton, all taking different routes, and theoretically all arriving at the same time at the Kevington Hotel. They would stay there the night, then return to Melbourne in the morning. This entailed a round trip of 350-450km, depending on the team.

As the ringleader of this three route circus, Youngy had the responsibility of organising the maps, the bikes and the teams (described in detail over the page). He also had the joy of inflicting whatever diabolical plot he wished on the other five clowns. He decided that getting onto learner bikes and riding across various tricky roads/tracks wasn’t enough of a challenge, and scheduled the ride for the winter solstice – that is, the shortest and usually one of the coldest days of the year. He also made special arrangements to pair each rider up with a bike that would ‘accentuate’ the adventure experience.

In the weeks preceding the ride, Youngy geed us up, dropping hints about the bikes we might ride, and the challenges we could face. He even gave us team names. And after weeks of preparation, it was his voice that woke us way too early in Warburton. “Saddle up Gonzos!” 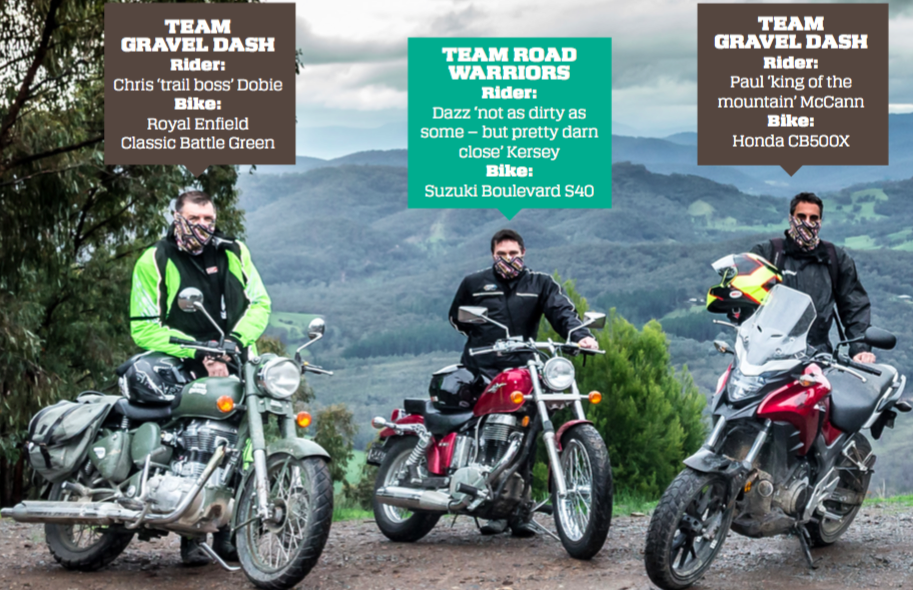 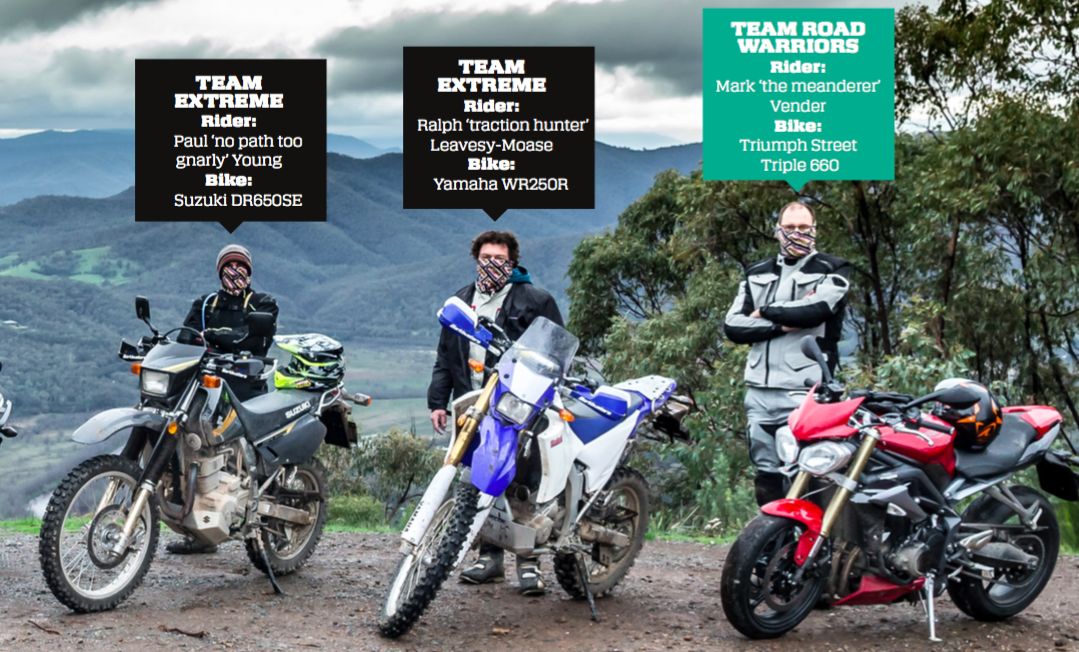 All roads lead to ….

Our destination was the Kevington Hotel – a little piece of Victorian history established in 1862 to cater to the miners who had arrived in the area in search of gold. More than 150 years later it’s still open for thirsty travellers.

Youngy reckoned our arrival would be followed by much merriment and sharing of stories around a roaring fire. According to him, the team with the widest grins and the tallest stories would be the winners. Others had a rather more literal idea of ‘winning’ and said the last one to arrive had to go for a naked swim in the river.

Who do you believe? Our genuine learner, Super-Sub Mark Vender, is still far too green to send on an off-road excursion, so he was teamed up with Designer Daz to take the road touring route. But that didn’t mean all would be easy for Team Road Warrior. Their route would take in around 350km of some of Victoria’s finest scratching roads, a veritable rumpled ribbon of tyre-ripping tarmac, including Reefton Spur, Lake Mountain road, and the Eildon-Jamieson road. This single journey would probably double Mark’s lifetime cornering experience in one hit, so we equipped him with one of the fastest, finest and nimblest-handling LAMS bikes money can buy: Triumph’s Street Triple 660.

Daz is an experienced rider and has travelled these roads many times, so to spice up his ride and give him a new kind of experience, I handed him the keys to a bike I knew he’d never imagine touring on, especially on these great sportsbike roads: Suzuki’s laid-back, feet-forward, 650cc LAMS cruiser, the S40 Boulevard. I have to admit, at first Daz didn’t seem too pleased with my planning, but I knew he’d just suck it up and eventually warm to being our chosen easy rider.

Add an extreme rain forecast for the area, plus arboreal detritus littering the road after a week of high winds, and we had a recipe for challenges and new experiences.

Both Editor Dobie and Sport Editor McCann have a sprinkling of off-road riding on their CVs, and both were keen to build on this experience. I guess both are typical of many riders, who dabbled in the dirt during their youth, but since growing older, getting hitched, and gaining adult responsibilities, have
been confined to the tarmac.

Their route is ideal for anyone wanting an entry point or reintroduction to adventure riding. The graded gravel Eildon-Warburton road is classified as suitable for two-wheel drive vehicles, but depending on the weather it can become challenging for any vehicles, especially motorcycles. To prove that adventure riding is more about a rider’s ambition and attitude than which bike they own, I chose two vastly different machines, both with just a tenuous thread linking them to the world of off-road adventure.

The Honda CB500X assigned to Mr McCann is a bike that hints at adventure in its styling, but isn’t equipped with any specific features which suggest it was intended to do serious off-road work. What it does have is a neutral riding position with plenty of leverage, a beautifully balanced chassis, and soft linear power delivery. Just add off-road tyres and it makes a brilliant gravel grinder.

For Editor Dobie, I planned something a little bit special. The Royal Enfield may not look like an off-roader, but it is arguably the most popular adventure bike on the planet. These things have been traversing the Himalayas and beyond in their thousands for well over half a century!

Okay, obviously our trail ride over Mount Terrible wasn’t as extreme as adventure riding gets, but it was the most extreme of our three routes, and probably as extreme as you would want for a first crack at rough high-country adventure riding. In fact, it’s a perfect weekend overnighter from Melbourne, with the option of riverside camping or cheap rooms at the Kevington Hotel. But be warned, although all the 4WD tracks were in pretty good condition for the middle of winter, this route has some very steep gradients, and is suitable only for riders with at least some basic off-road skills.

I’ve got to own up to a bit of self-interest in the bike selection. For a long time I’ve wanted to get Suzuki’s perennially popular DR650 out on some nasty terrain. Its versatility as everything from city commuter to global adventurer is well-known, but I was curious to see how good a trail bike it was.

My trail buddy for this trip was Ralphy. It’s easy to forget the bloke is marginally on the other side of 60, because he’s so damn fast and carefree. But, being aware that he hasn’t done much adventure riding since breaking his leg a couple of years ago, I wanted to choose a capable and lightweight off-roader to help restore some of his confidence. Yamaha’s WR250R fits this brief perfectly, and is a fantastic trail bike which is also right at home on a city commute.