Inside a motorcycling renaissance | Local | News

We are living in an age that is about to replicate the dawn of motorcycling. This time the technology is being driven by electric motors, not the wheezy combustion-engines that launched motorcycling at the start of the 20th Century.

Electric motorcycles account for less than one percent of sales in Europe, the motorcycle market that shapes world sales, but have seen an 81.5 percent increase in the past year.

Diehard riders don’t want to know it, but at this rate of growth electric motorcycles could be the future of the industry within the next decade.

Recent announcements by such diverse mainstream manufacturers as Ducati and Harley-Davidson, and hints of an electric future from Japanese giants such as Yamaha confirm this. Last week Honda announced plans to electrify its entire car range in Europe (either fully electric or hybrid) by 2025, prompting predictions of a similar objective for its two wheeled products.

The world’s first motorcycles came on the back of a boom in cycling and exactly the same is happening now. An explosion in sales of electric pushbikes is bringing a new relevance to electric motorcycles.

This is great news for the traditional motorcycle industry, which is struggling with an ageing buying demographic. The typical buyer of an electric bicycle is from a much younger generation.

Companies like Ducati, which late last year announced an electric bicycle and hinted of an electric motorcycle by 2020, show how established brands can capture this young new market.

Social observers are claiming a renaissance in transport, similar to the early 20th Century.

Back then, anyone could be a motorcycle manufacturer, sourcing frames from one supplier and engines from another. Similarly, today’s electric bike start-ups go from concept to prototype at the click of a computer key and the sound of a 3D printer.

The technology is advancing at a crazy pace with batteries lasting longer and taking less time to charge. Electric motorcycles are becoming lighter, faster and with a longer range, while the designs are getting more eye-catching.

The world’s cities are driving the change. Just one example is Paris where its socialist mayor, Anne Hidalgo, has a deadline of 2030 to rid the French capital of all vehicles except electrics.

She says cities produce 70 percent of the world’s greenhouse gases. Noise pollution is another enemy and Yamaha MotoGP team chief Lin Jarvis has a bit to say on that issue.

“Definitely electric vehicles will take off in racing disciplines like motorcross or enduro, because the places these vehicles are used are closer to urban areas,” he says.

KTM’s Asia manufacturing chief, Luca Martin, recently told a journalist visiting its huge Philippines manufacturing facility that “we are in an era of new mobility. We have been developing off-road electric bikes for many years already,” he said. “We want to be part of this movement.”

Martin pointed out the major challenge for makers of electric motorcycles.

“While the weight of a battery may only slightly alter the performance of a car, it can completely change the handling of a bike,” he said.

Meanwhile, Zero Motorcycles has posted a telling photo on Facebook taken in San Francisco, saying “In what must have been the quietest police pursuit ever, an officer on a Zero DS police bike pulled over a Tesla. Big thanks to a Bay Area police customer for capturing a snapshot of the future.”

We can imagine it now: “Ma’am, you have the right to remain…”

Harley-Davidson has acquired StaCyc, Inc., a producer of electric-powered two-wheelers specifically designed for children aged from three years. The acquisition of StaCyc expands Harley-Davidson’s electric portfolio and reinforces its commitment to lead in the electrification of motorcycling. StaCyc entered the market in 2016 and its products are already sold in some H-D dealerships in the US. H-D has also released more details on its LiveWire motorcycle. Range is 225km city, 142km of mixed city/highway use. Acceleration from 0-100km/h is 3.0 seconds, 0-50 in 1.9s. A full charge is one hour via a DC fast-charger, or it will charge to 80 percent in 40 minutes. Top speed is 177km/h. Erik Buell is back with a new electric bike brand – Fuell – and plans to launch two models in April. He’s teamed with Frédéric Vasseur, team principle of the Alfa Romeo F1 squad and founder of Spark Racing Technology, builder of Formula E electric racing cars, and Francois-Xavier Terny, founder of Vanguard Motorcycles in New York, to create the new venture.

The initial models will be an electric motorcycle – the Flow – and a e-bicycle called Fluid.  The Flow comes in two versions, one with 11kW to fit into the European 125cc licence bracket, the other with 35kW which suits the EU’s ‘A2’ motorcycle licence category for mid-sized bikes. 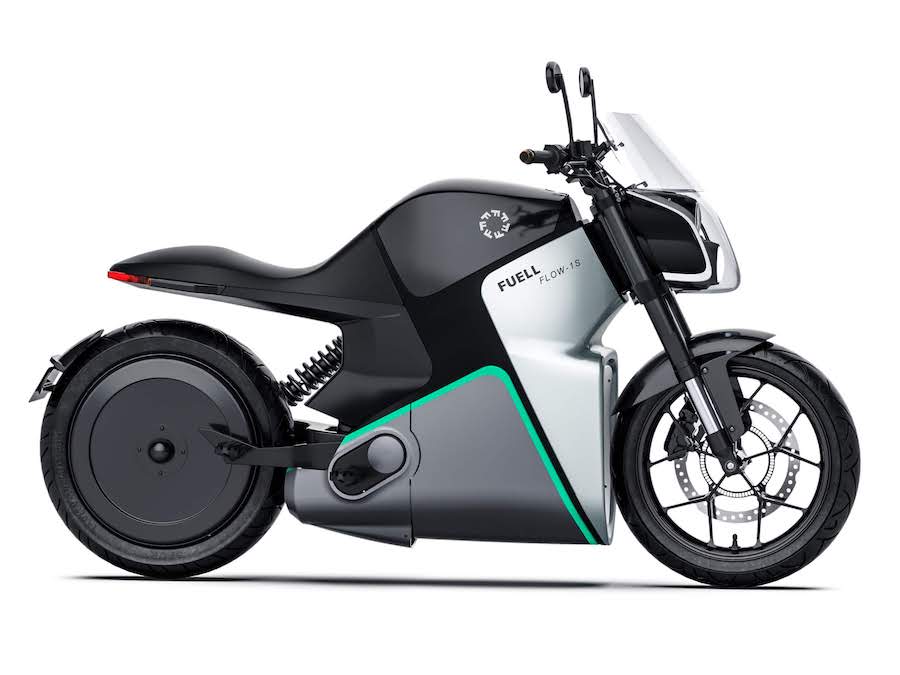 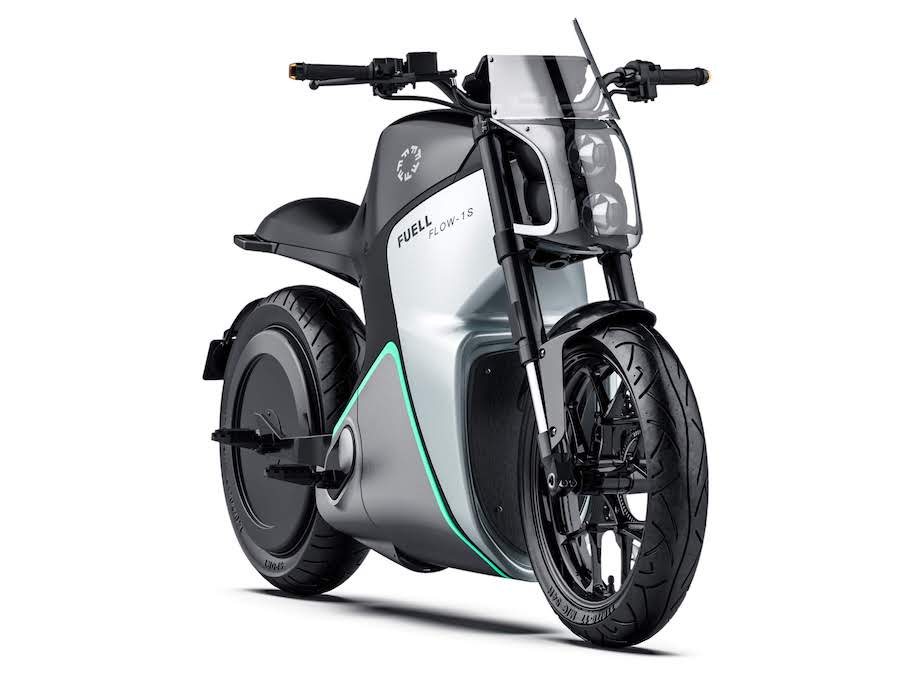 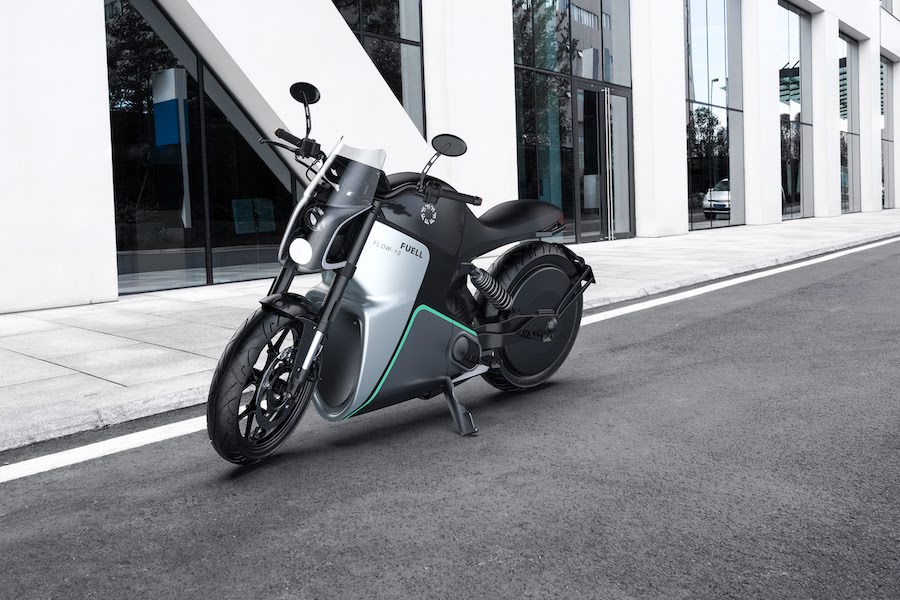 Son of a gun

The case for battery-powered motorcycling just got a lot stronger with the launch of Zero’s 2020 SR/F, which redefines electric propulsion. Not only is it the fastest and most powerful electric model in Zero’s 12-year history, its peak performance exceeds Ducati’s benchmark V4 Panigale. Claimed peak power, for short periods, is pegged at 82kW at 5000rpm to prevent overheating, while torque is 190Nm, some 35 per cent more than the Ducati’s maximum. AMCN RECENTLY ATTENDED
the Australian launch of the Super Soco TS1200R. An excellent alternative to a year’s worth of train tickets, it has a top speed of 50km/h, a range of 80km, weighs just 74kg and looks exactly like a new motorcycle should in 2019. The best bit? It’s $4990 rideaway price. There’s a full review coming.