Every form of motorcycle racing involves some financial pain, but there’s one class that offers a huge bang for your buck – Period 6 Post Classic Proddie racing

Cheap racing – now there’s an oxymoron. There’s nothing cheap about committing to a year of racing, and the wallet-stressing expense is not limited to those chasing a national championship. Racing at a base level, purely for enjoyment and in the hope of winning a small trophy, requires a decent injection of cash, followed by equally as frightening running costs, and then there’s the inevitable crash damage. Many a promising racing career has been cut short by lack of funds.

There’s plenty of racing available in Australia, from club racing through to the ASBK national championships, and in my own on-track adventures I have found a series – and one category in particular – that offers a surprising amount of bang for your buck. It’s the PCRA Championship run by the Post Classic Racing Association.

In addition to organising the annual International Festival of Speed (InterFOS), the PCRA runs an annual club championship held over five rounds at Sydney Motorsport Park and Wakefield Park Raceway. As the name suggests, the series is for classic machines split into the same period categories used across the board at historic race events. Some classic bikes can cost more to purchase and maintain than modern machines, some are even irreplaceable, but lurking within the alphabet soup of historic categories and sub-classes is Period 6 250cc production racing, an absolute bargain-basement racing class.

One of the main reasons Period 6 250cc Production racing is so affordable can be attributed to Honda’s popular CBR250RR. Produced between 1986 and 1996, the 16-valve, four-cylinder race-replica MC19 and MC22 Hondas were a boy racer’s dream back in the late 80s and early 90s, and retain a cult following today. The screaming four-pot 250cc engines produce a claimed 33.6kW at 16,000rpm and are virtually bullet-proof. Honda sold bucketloads of these little pocket rockets in Australia, so it only took a single afternoon of googling to uncover a wide choice of quality bikes and a mountain of available spare parts for sale (see Second Hand on page 82 to learn more about the bike itself). Within hours of deciding to have a crack at PCRA racing I was the proud owner of a race-ready MC22 CBR250RR for just $2000. As an additional bonus, the bike belonged to former Proddie hotshot Ken Watson who had been campaigning the bike with much success over the previous two PCRA seasons. One of the main attractions with the Honda is that the stock fairing is perfect for racing – simply remove the lights and fill in the holes. It also has a single seat as stock, and finding race rubber for the 17-inch wheels is easy. The only additional changes from stock for this front-runner were a cheap ($100) modification to the rear shock with 20mm of preload added, an $80 slip-on muffler, heavier fork oil, and larger jetting in the four carburettors. I threw on a used set of Pirelli Supercorsa tyres, and had a cracking little race machine sitting in my garage with the opening round of the 2017 series at Wakefield Park less than a week away.

Thanks to the assistance of Ken Lindsay and the PCRA team, I was able to lodge a late entry to the event, and that’s when a discovered that my choice of racing machine was going to pay additional dividends. The little Honda is eligible to compete in three historic categories: P6 250 production, P6 250GP and P6 500 with pre-modern F3. A PCRA meeting is a single-day affair conducted like a military exercise. My three categories provided me three qualifying sessions and nine five-lap races in one day. And the cost? Race entry for the one category is $325, which included a shared carport and a transponder, then a measly $30 for each of the other two categories. For a total race entry investment of just $385 I was set to have an incredibly full day of almost non-stop racing.

Despite the jam-packed 21-race program, and a pit area full of historic machinery, there was no air of panic when I arrived at Wakefield Park and unloaded my new racer. The sign-on, scrutineering and rider briefing process ran like clockwork, and the event started on time. My little Honda felt a lot like my Yamaha R3 racebike, helping me to a respectable qualifying position of fourth in a field of 30 for the P6 250 Proddie race. The five-lap screamers are full on, and after my trademark shitty start, I fought back to finish fourth outright and third in my class. I was also competitive in the other two categories against larger capacity machinery, running mid-pack. Everything looked on track for my first-ever racing trophy…

Until it all turned to crap. I tried a little too hard, throwing it down the road and smashing the fairing and screen as well as breaking the handlebars, bending a heap of stuff and inflicting a few bruises. The team at the trackside medical centre gave me the thumbs up to continue, but the bike was too severely damaged to continue. As I packed my battered steed into the van and headed home, I was far from disappointed. I’d enjoyed a brilliant day of racing and met new people, and a quick google search revealed the parts I needed to get the bike ready for the next event would be easy and cheap to obtain.

My trophy cabinet may still be bare, but having sampled what PCRA racing has to offer, I’m confident I won’t need to mortgage my house in pursuit of a small shiny piece of metal and wood. I’ll be able to keep racing for as long as I feel I’m up to it without having to update to the latest machinery. I just need to stop crashing. There’s another category of PCRA racing that’s even better value for money than P6 250cc Proddie – it’s called commuterlites, and you can purchase a race-ready bike for as little as $1200. As the name suggests, the category is contested by single-cylinder four-stoke commuters of no more than 150cc. As well as being a perfect nursery for young talent, there’s plenty of older, larger and more experienced riders taking part purely for the fun factor, which this class delivers by the truck load. Adding to the enjoyment is a yearly one-hour, two-rider enduro that sees plenty of parents and offspring join forces on the underpowered little bucket racers to see if they can slipstream their way to victory. 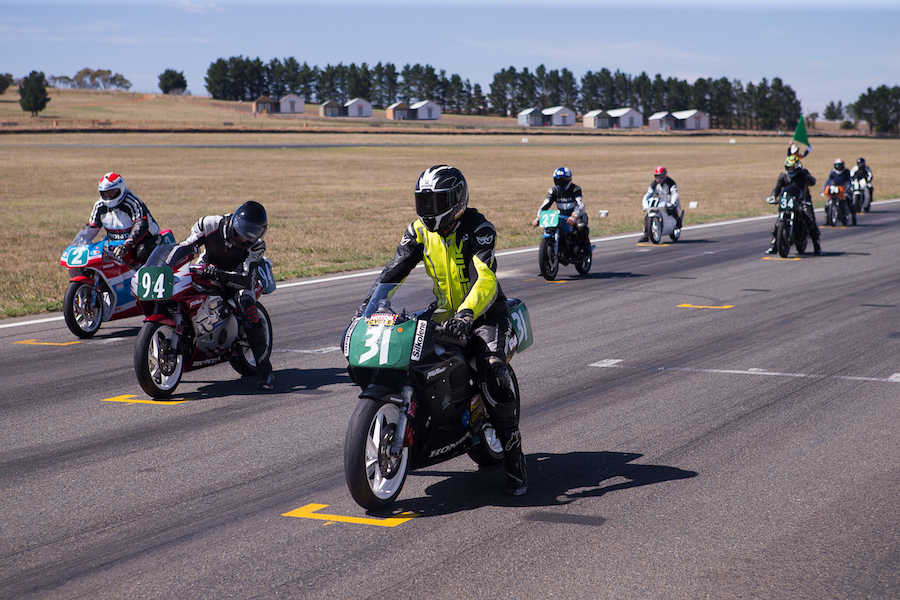 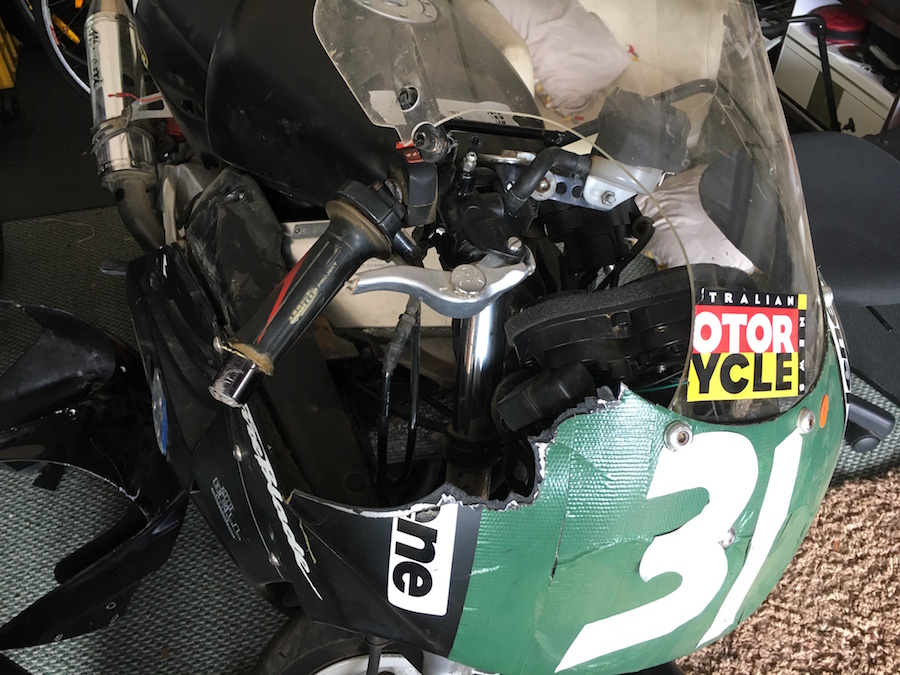 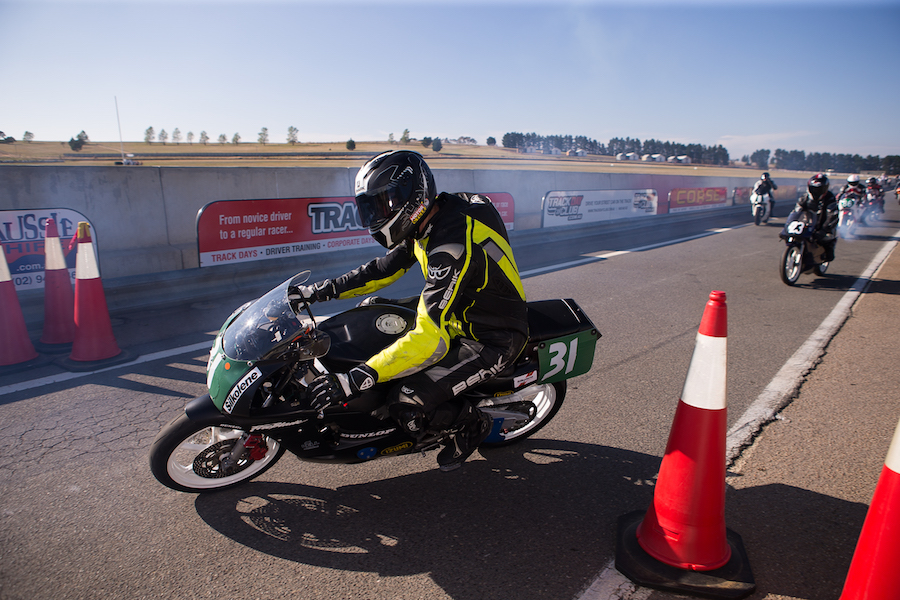 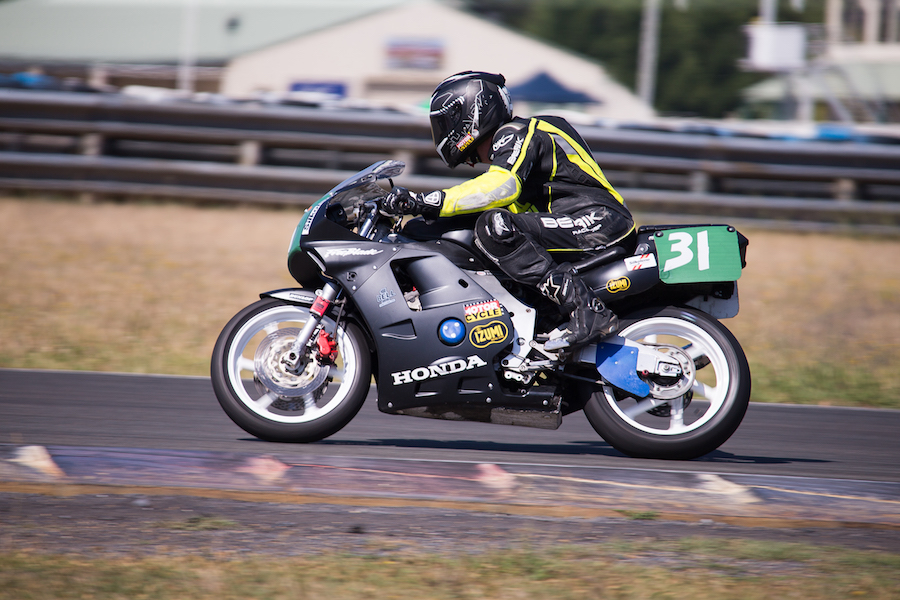 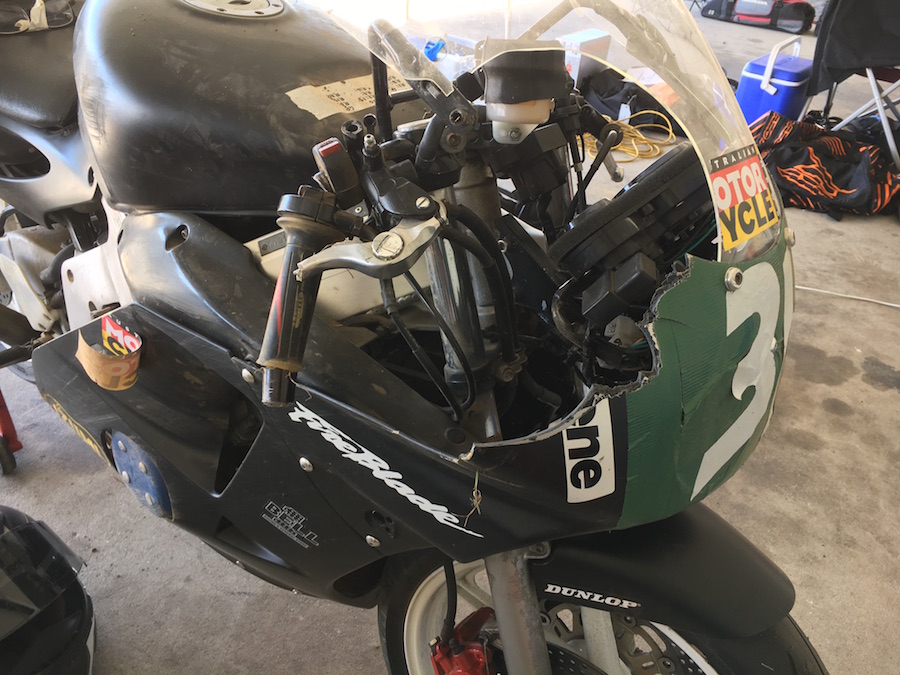 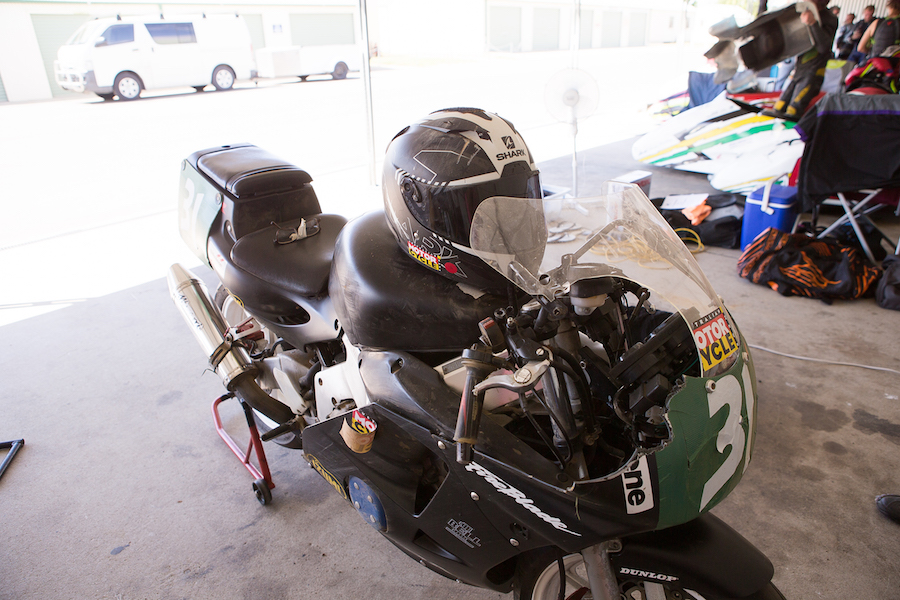 If you want to get serious with your P6 Honda CBR250RR and take on some of Australia’s best under 400cc production hotshots, it’s eligible to enter the 400 Supersport class of the Swann Insurance Australasian Superbike Series. At the recent opening round at Sydney Motorsport Park, regular CBR racer Greg Burt loaned his 1990 P6 machine to young hotshot Ryan Young. Despite possessing no prior experience with the bike, Ryan finished in sixth position against a quality field, posting a fastest lap time of 1m54.43s, just three seconds slower than race winner Max Croker riding a KTM RC390, a bike with a 27-year development and 125cc (50 per cent) capacity advantage. 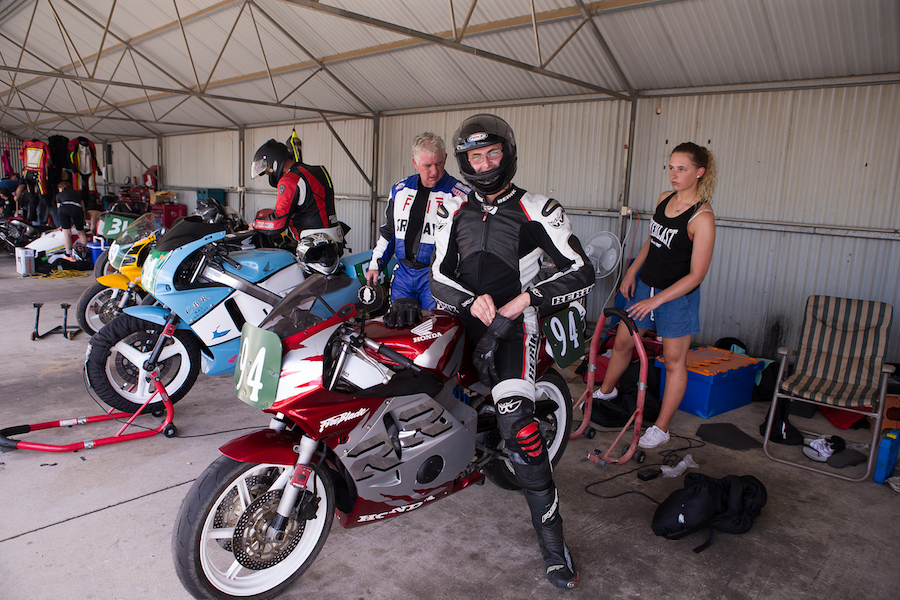 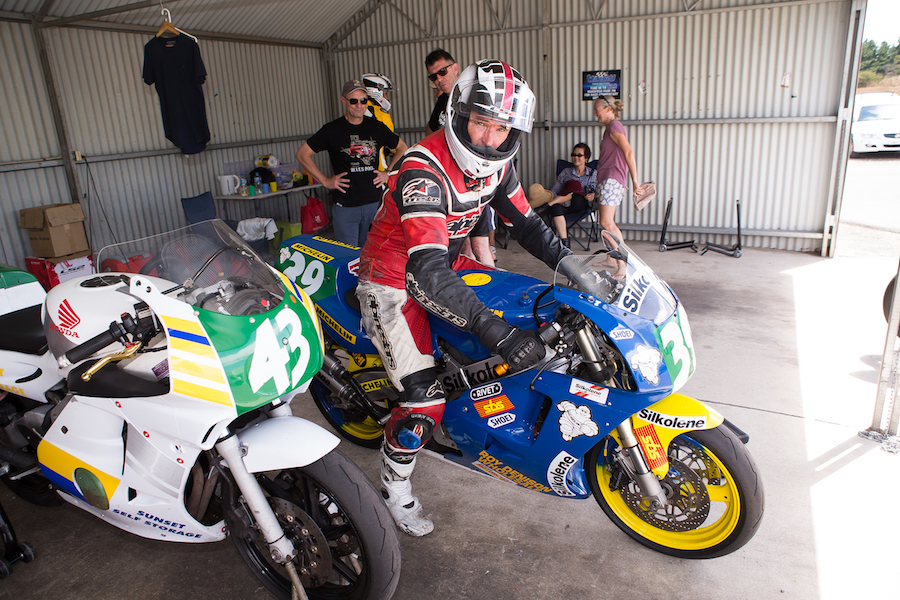 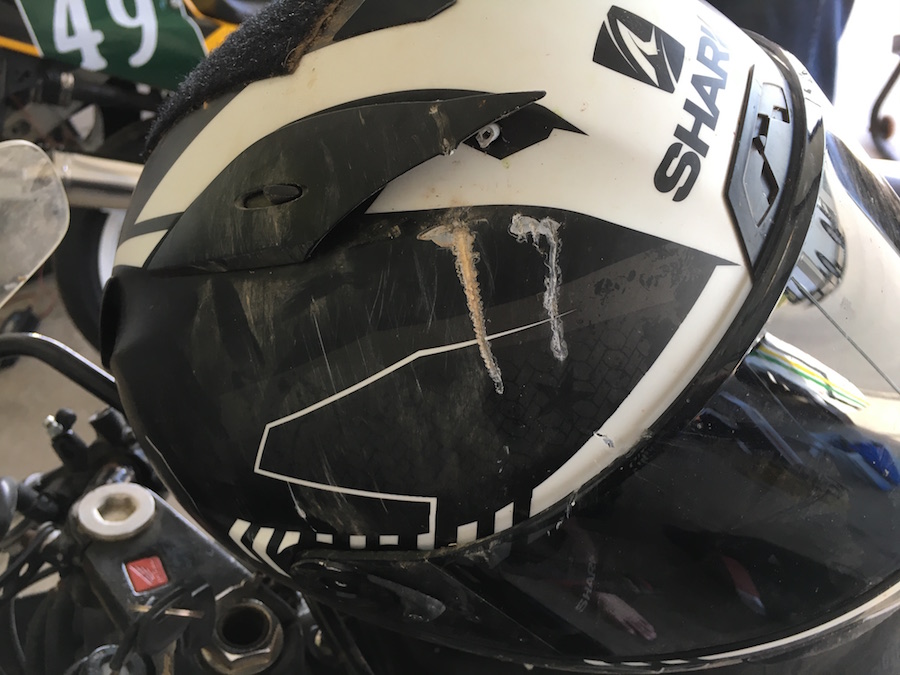