It’s been 25 years since Miguel Galluzzi left show-goers opened mouth when he whipped the covers off the first-ever M900 Monster at the 1993 Milan Show. And in the two and a half decades since, an almost countless number on Ducati models bearing the Monster moniker have graced showroom floors. Despite the Scrambler stealing some of its nakedbike limelight, the Monster is still a hugely important model for Ducati. 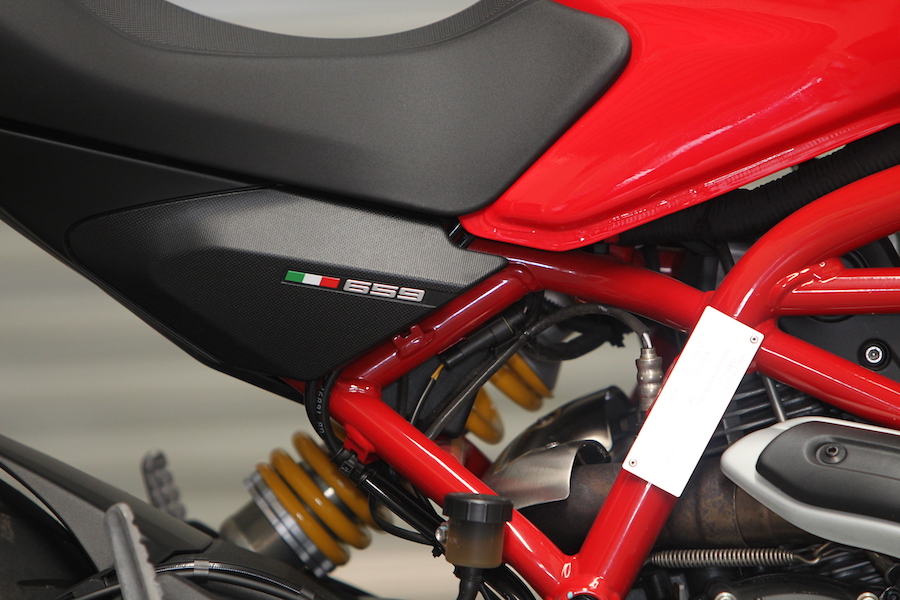 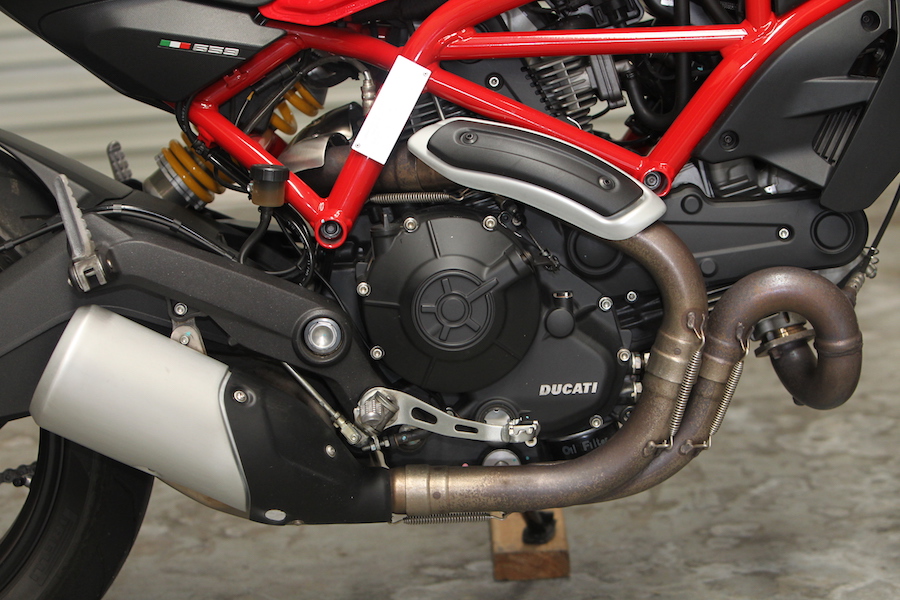 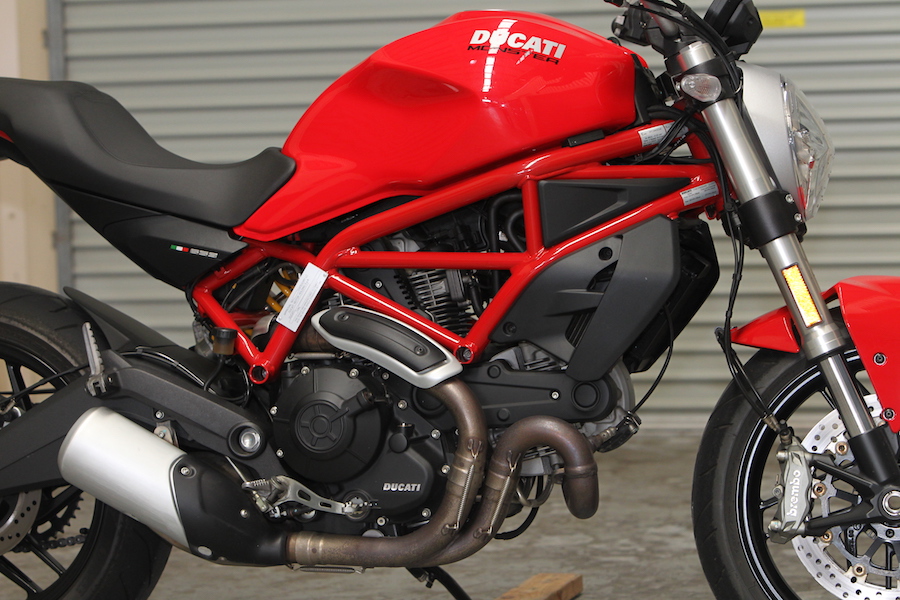 There was a time when the entire Monster range was air-cooled, but recent engine upgrades and emission regulations have resulted in now only the Monster 797 still using the breeze as its method of cooling. For 2018, Ducati returned the Monster 659 to its line up in a bid to keep a Monster in its lucrative LAMS camp. With the rules for our nakedbike test requiring an engine capacity of no less than 600cc and no more than 800cc, you may have thought the Monster 797 would qualify, but that’s an 803cc engine, so it was up to the 659cc LAMS-approved machine to fly the Bologna flag. The Monster 797 and 659 are actually the same bike, with a reduction in cylinder stroke from 66mm to 54.2mm used to lower capacity. The bore remains unchanged at 88mm, but compression is reduced from 11:1 to 10.2:1. These, and a few other restriction methods, have reduced power to a LAMS-friendly 37kW and 44Nm. Keep the revs in the 4000rpm to 6000rpm range and it’s quite a willing bike, fall below that or push above and you begin to feel the effects of an engine that’s being held back.

The $10,900 price tag places the Monster 659 $900 above the Kawasaki Z650L. That’s close to $11K, but you are getting a great-looking Italian bike for your money, one which puts its trellis frame and V-twin engine to good aesthetic use. At just 685mm, the Monster has the lowest seat height of the bikes on test, and its slim profile and tapered seat minimises the reach required to the ground. Its design offers a snug fit which holds the rider in place. 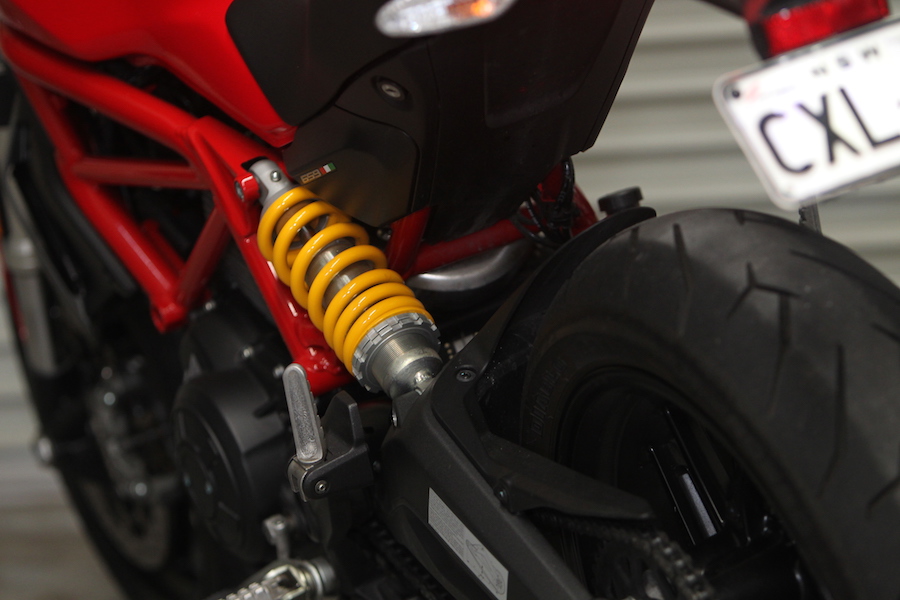 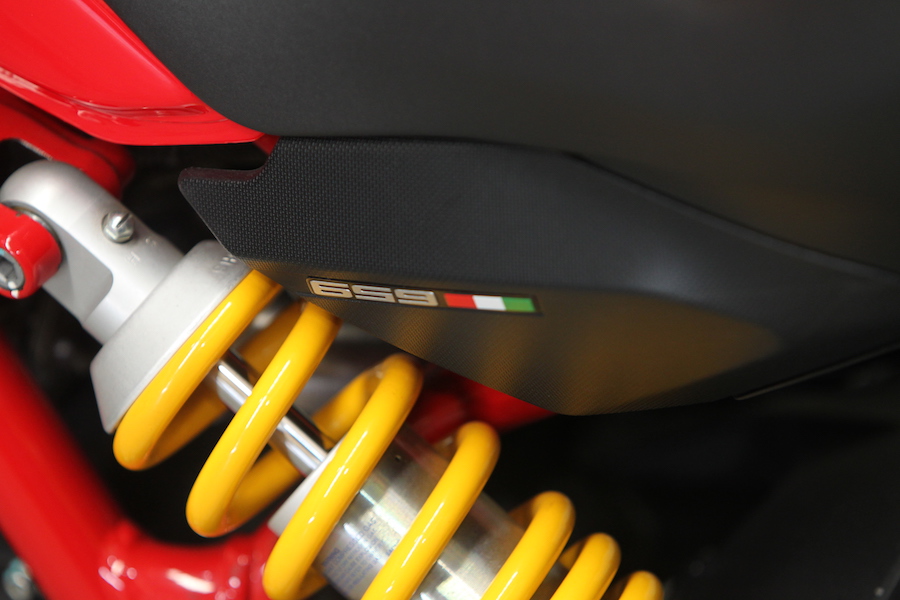 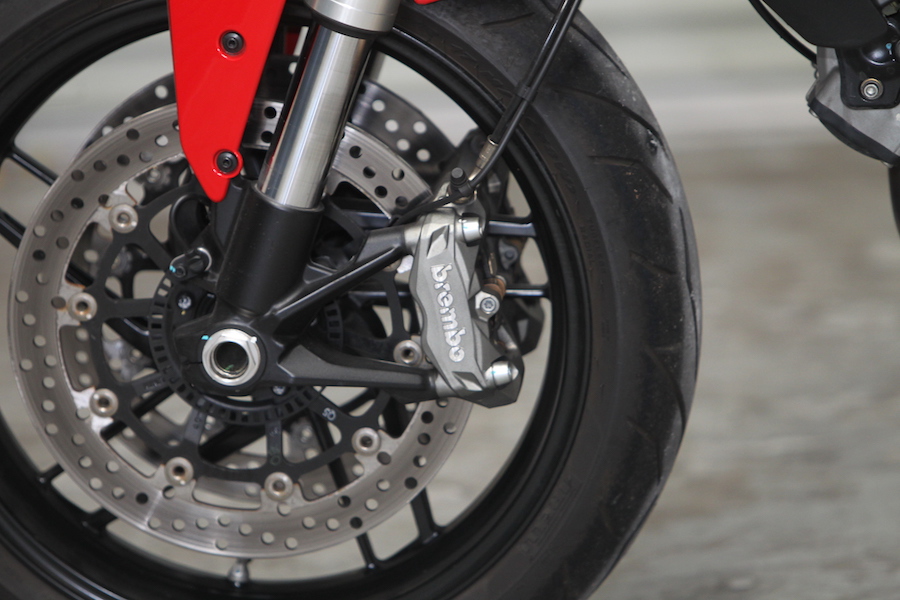 It’s a bike that just about anyone can jump onto and feel comfortable. Ducati has been able to refine that over the past 25 years.

Its well-balanced chassis impressed everyone. Today’s Monster isn’t the same beast released back in the early 1990s, but the lessons learned during that time have all filtered into this bike.

Like the Kawasaki Z650L , Yamaha’s MT-07 HO, Honda CB650F , Suzuki SV650X, the Monster has no switchable electronics, and its 43mm Kayaba upside-down fork is non-adjustable, with only preload adjustment available on the Sachs rear shock. Something that’s not the same as the bikes before is its Brembo braking kit; twin 320mm floating discs and radial-mounted four-piston Brembo M4.32 calipers up front mean this bike is anything but under braked. And like the Kawasaki, some felt it was a little over-braked with its rock-hard brake lever. The lack of gear indicator was compounded by the difficulty we all found when selecting neutral while stopped, which which we felt could prove troublesome for an inexperienced rider.

A quick poll revealed none of the test team had ridden the Monster 659 previously, so there was plenty of banter about it after everyone had taken it for a spin. Most began to really warm to the Monster following two days of solid riding, proving that first impressions are not always the correct ones. 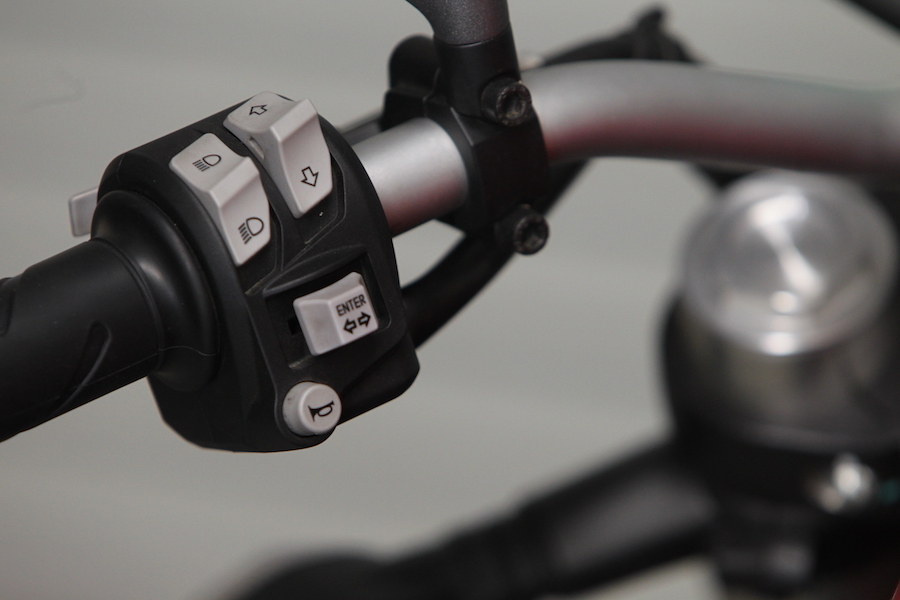 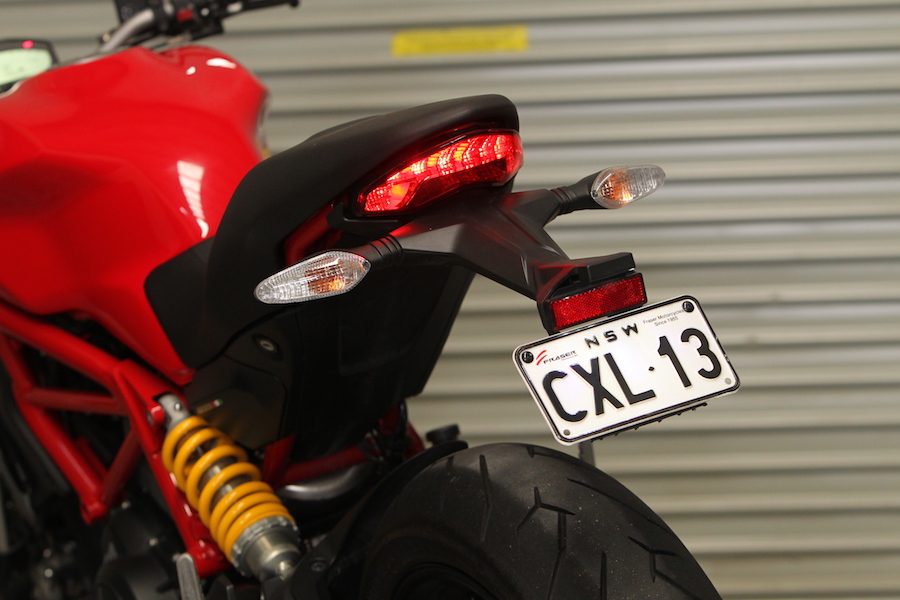 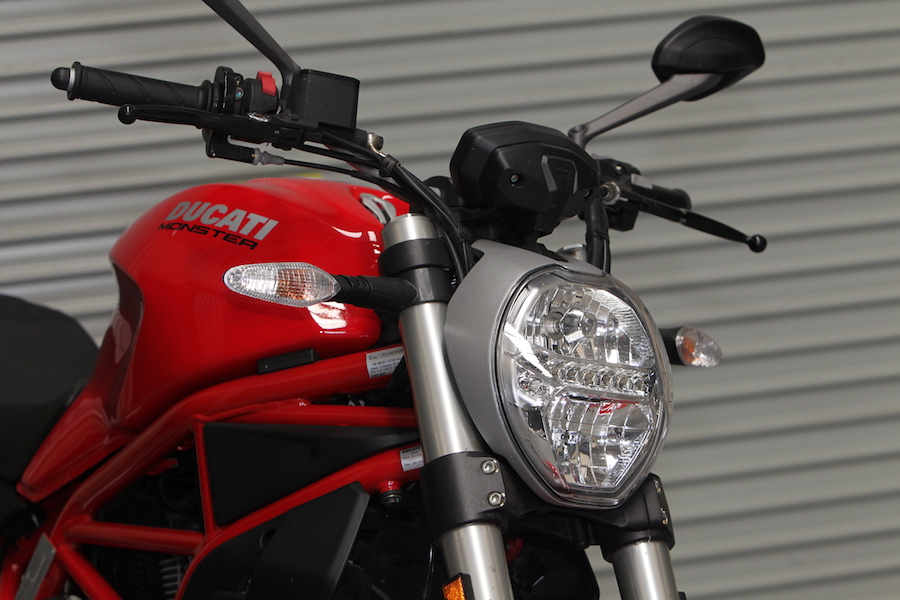 If there is one bike I’ve recommend to learners or returning riders over the years, it’s the Monster. Regardless of the variant, the Monster has impressed me for over a decade and the 695 is no exception. In fact, this machine feels the most intuitive to me – you sit on it and immediately feel at home. Everything is in its place, the chassis is perfectly balanced and all the controls feel completely natural, especially the brakes.

One advantage of plus-400cc LAMS bikes is they are built more robust and can handle being pushed harder. One gripe: it’s bloody hard to find neutral! The compromise in the LAMS specification is that the Monster’s engine has a narrow maximum torque band. The throttle feels like a quick-action racing version, it’s such a short twist of the wrist. I think it feels underpowered compared to the Kawasaki. 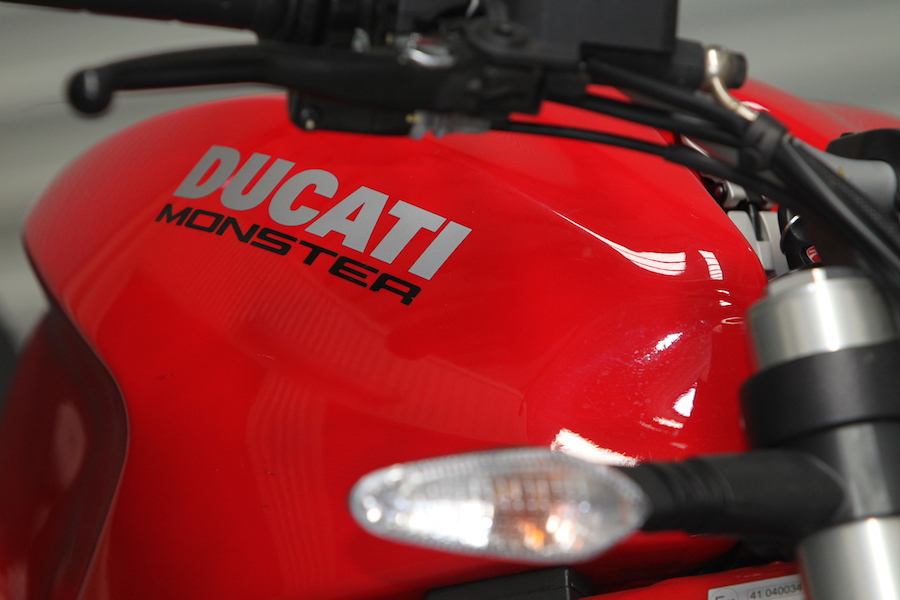 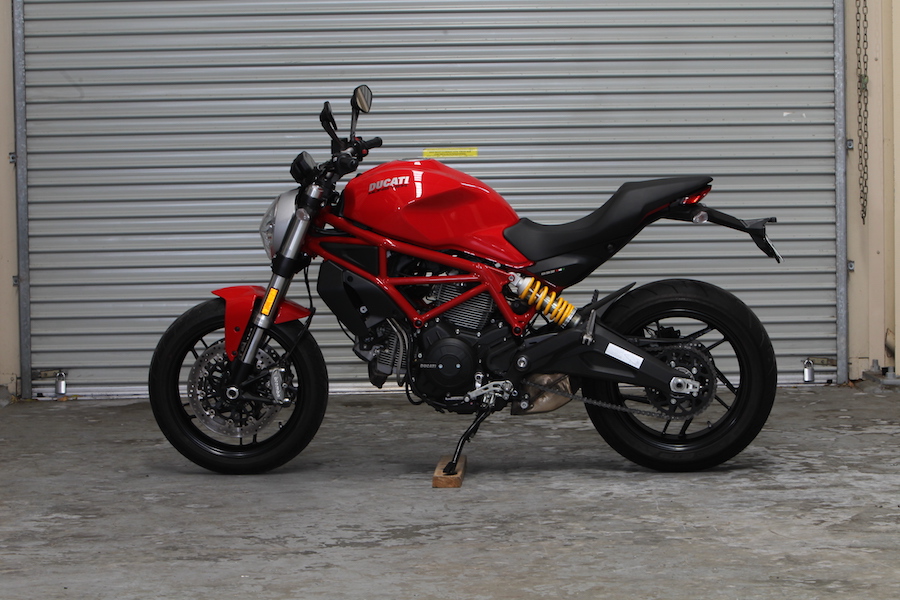 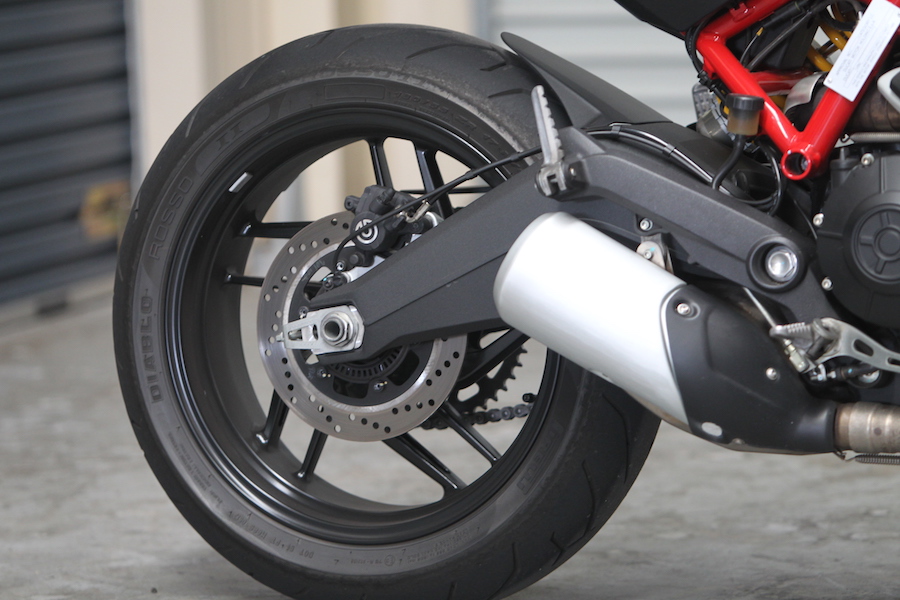 There was still enough punch in this little Monster to satisfy me and the overall build quality, together with Ducati’s choice of components, justify having a slightly heavier (and pricier) machine. From the overall look and style, you would never pick it as learner legal, it has the distinctive, muscular Monster stance on the road and I really like the moulded one-piece seat.

This is a classy bike you can actually learn to ride on and if you’re a Ducatisti, I think it’s an ideal entry to the famed Italian marque. A timeless muscular design that provides road presence and street cred. It’s a great entry to the Italian brand if a retro-styled Scrambler isn’t your bag. I would have been nice to see Ducati extract a little more performance. Its 37kW makes it the least potent bike on test, and its output doesn’t match its looks. The Monster got it name thanks to the infatuation designer Miguel Galuzzi’s children had with a popular collectable toy in Italy called, you guessed it, Monster.