Australian Dennis Savic is on the brink of achieving a dream he’s been working towards since he was 14 years old: to manufacture his own motorcycles

Aged just 26 years old, it’s easy to dismiss Melbourne-based Dennis Savic’s newly launched electric motorcycle venture as a fanciful pipe dream. A somewhat naive undertaking by an enthusiastic young man not yet hardened by the tough realities of the world. But while it is very much a dream and one with more than its share of naivety, it absolutely should not be dismissed as fanciful.

“It’s been a dream of mine since I was a kid,” Savic beams. “When I was 14, I decided I would do mechanical engineering so I could develop my own vehicles – it’s just what I’ve wanted to do.

“Every decision I have made since that age has been targeted towards this.”

And its the conviction in his well-spoken words and the sincerity on his determined face that makes you believe this guy just might defy the odds and make a go of currently being Australia’s only motorcycle manufacturer.

“That’s quite a big title for such an early stage business,” he says, quick to point out that the four years of Savic Motorcycles’ existence has been rather rudimentary. Nevertheless, Dennis Savic and his equally youthful and enthusiastic team used last year’s Moto Expo event in Melbourne to unveil the company’s first pre-production prototype for which he’s already received six deposits.

“In our first year we converted a Yamaha YZF-R1 to run on electric, the year after that we did our first ground-up build, so we went from concept through to prototype on a bike that we called the S40,” he explains. “The S40 used a different powertrain set-up and a different style of frame, we actually built a twin-spar trellis frame, and then we decided to try and launch it that same year. 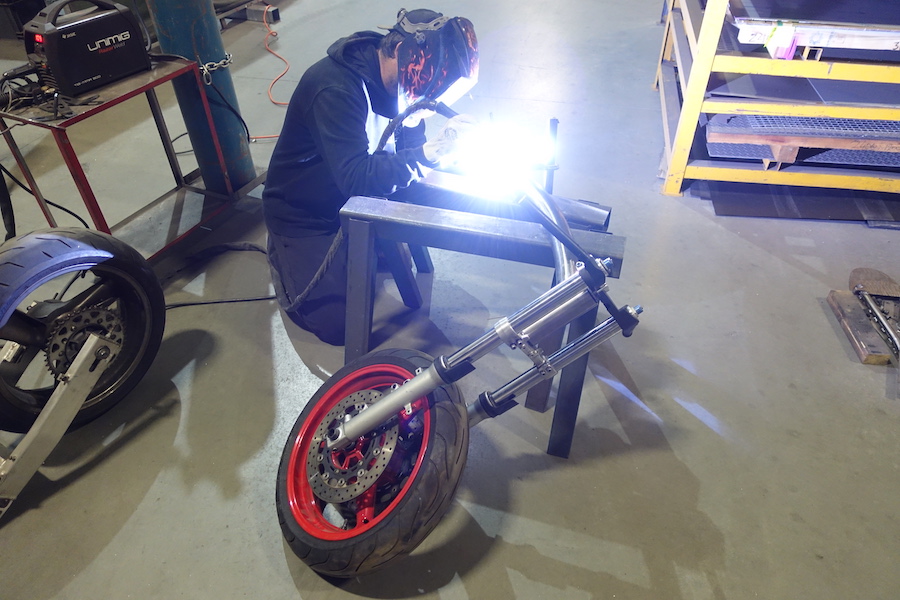 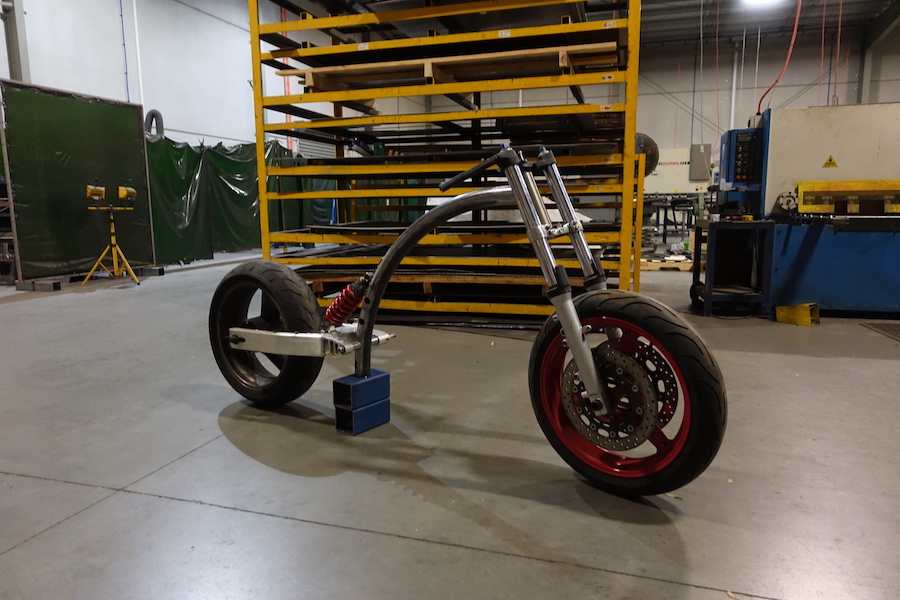 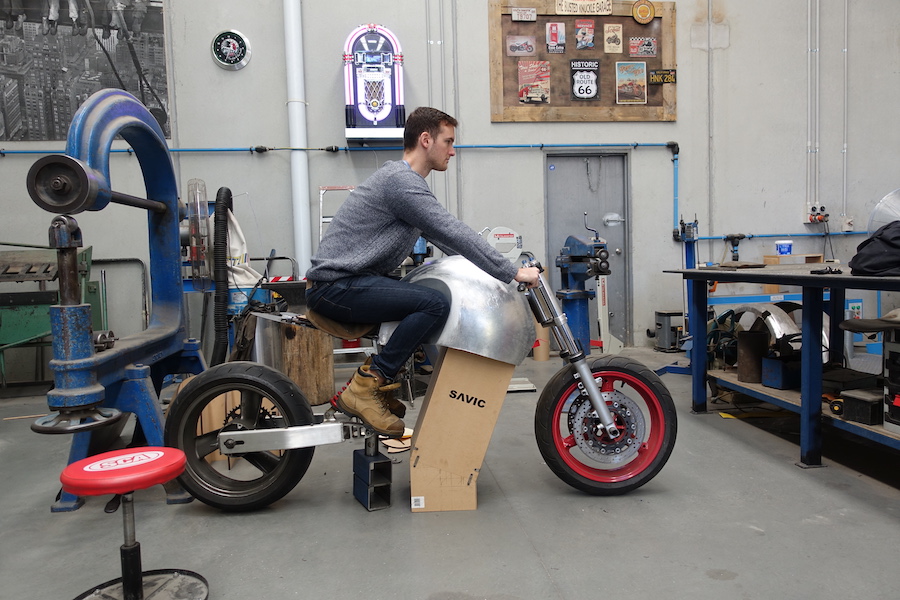 “We had a very small timeframe and didn’t even know how to weld when me made that decision, so the fabrication was quite rushed and needless to say that bike remained as a static prototype for safety reasons.”

We’re standing in a small corner of a large shed in Melbourne’s south east suburbs, which Savic rents from the occupants as his modest but functional workspace. Clear tubs of various sized power cords, terminals and battery cells fill spaces my brain expects to see gudgeon pins and big-end bearings and the motor-less S40 is leant against the wall. He looks proudly at the rolling chassis of that first ground-up build before turning his attention to a rusty and crudely welded tubular-steel contraption hanging on the wall.

“This was my first go at building a frame,” he grins, before launching into the reasons why it failed and what he learnt on his way to creating the second and third builds.

“Actually, our original plan was to build a 200kW monster,” he reveals. “But from those first couple of years and the more exposure we had to investors, as we learnt more, we pivoted the product spec to be more suitable.”

And it’s that ability to remain fiercely determined to still achieve a decade-old dream while completely accepting that the eventual outcome required a significant shift is what sets Dennis Savic apart from most other 26-year-old dream chasers, and exactly what will probably spell the key to his success.

“We took all those lessons over those first few years and put them together in 2017 to develop a concept design and concept spec for what we showed at Moto Expo. That’s called the C40.” 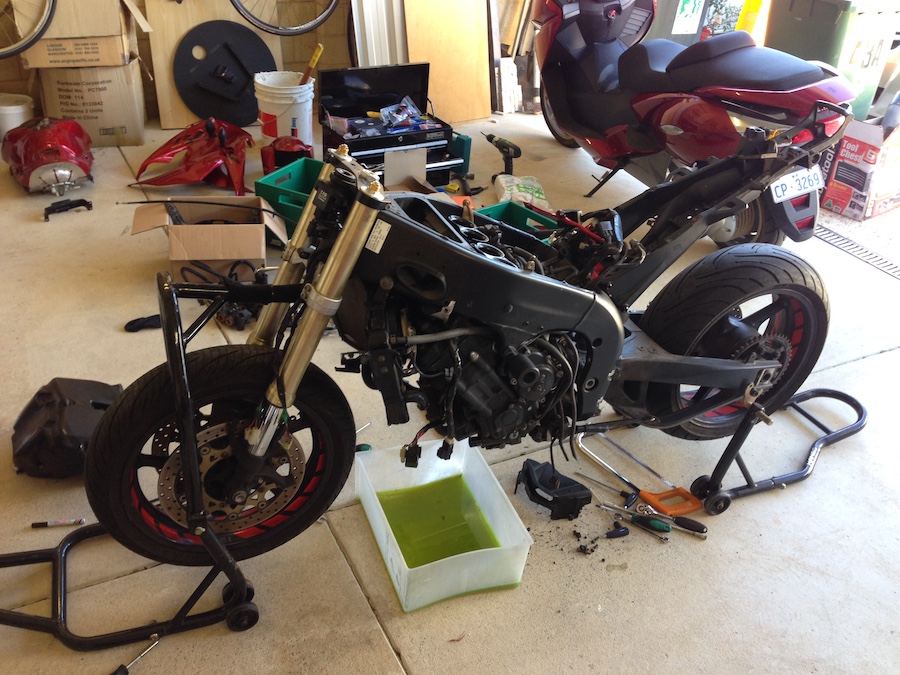 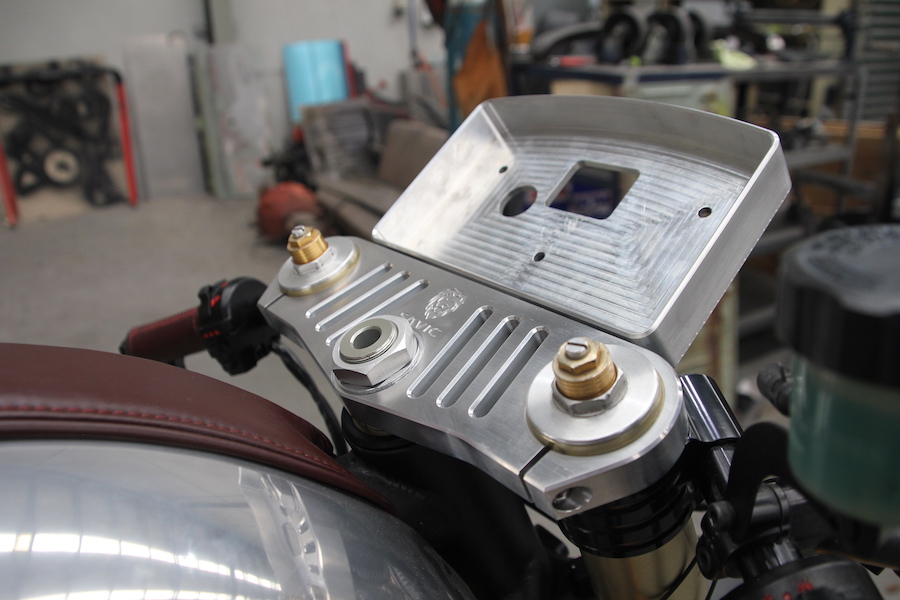 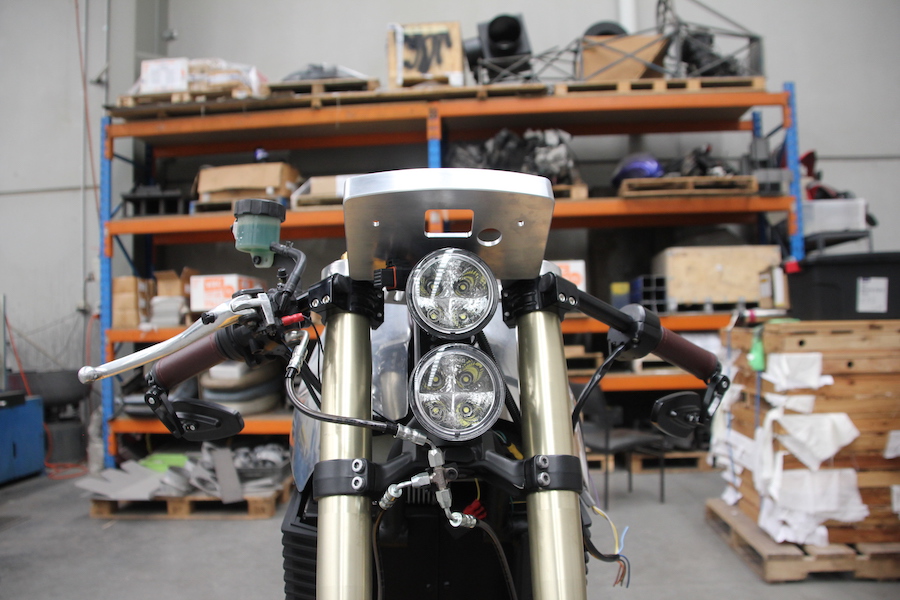 “Our intention is to unveil the production bike at Moto Expo this year in Sydney,” he says. “The plan is to start manufacturing the first 10 production vehicles, we’re calling them the Founder Edition vehicles cos that’s essentially what they are and we want to deliver them either at the show or directly after.

“But that is pending investment,” he concedes. “We’re going back to the investor market this month and we need to complete another capital raise before we can move forward.”

But moving forward is what this guy does best. The first-generation Aussie was raised in Perth in Western Australia where he completed his engineering degree before completing his MBA in corporate finance. And while his study and hard work was all pointing towards the launch of his own vehicle manufacturing business, it was a tour of the automotive factories while on holiday in Italy which triggered the real start of Savic’s fast-moving chase of a long held dream.

“I was really inspired at the Pagani Museum because Horacio [Pagani] started his own car company,” he said. “And when I learnt about his story – he built a little motorbike when he was a similar age to me – it was completely… touching, I suppose, to hear his story. “It was literally four weeks later that I had a job offer in Melbourne and two weeks after that I was here.”

Today, Dennis works for RLE International where he’s contracted to Ford as a Weight Attribute Engineer, a role he says has been invaluable in facilitating the development of Savic Motorcycles.

“A few of us are from the automotive industry, so we know how that works now. We know where the fat is, we know how to build a lean organisation that can develop products,” he says. “I’ve gone from zero experience – and I mean zero – going from no management experience, no experience in the workforce less than four years ago, to where we are now and starting to build a production prototype that we actually have a test plan for and we’ve done our analysis, and we’ve done our design work and we’re starting to operate like these guys would be operating.”

With a mother who’s an engineer and a father in IT, the path their son has chosen isn’t entirely a surprise.

“But I was never a good student,” he’s quick to add. “I got told I would never finish school, I got told I’d never go to uni, I got told if I did go to uni I’d get kicked out. And if it wasn’t for mum and dad just telling me to put my head down and push through and if I really wanted it, work hard enough and I will get it, it mightn’t have happened.

“They’re incredibly supportive, but initially they weren’t,” he continues. “Like any logical parent wouldn’t be. It’s a dream, it’s a blue-sky thing – well it was back then – and they were upset that I sold my car [when I was self-funded] because it was a dream car that I worked really hard for. 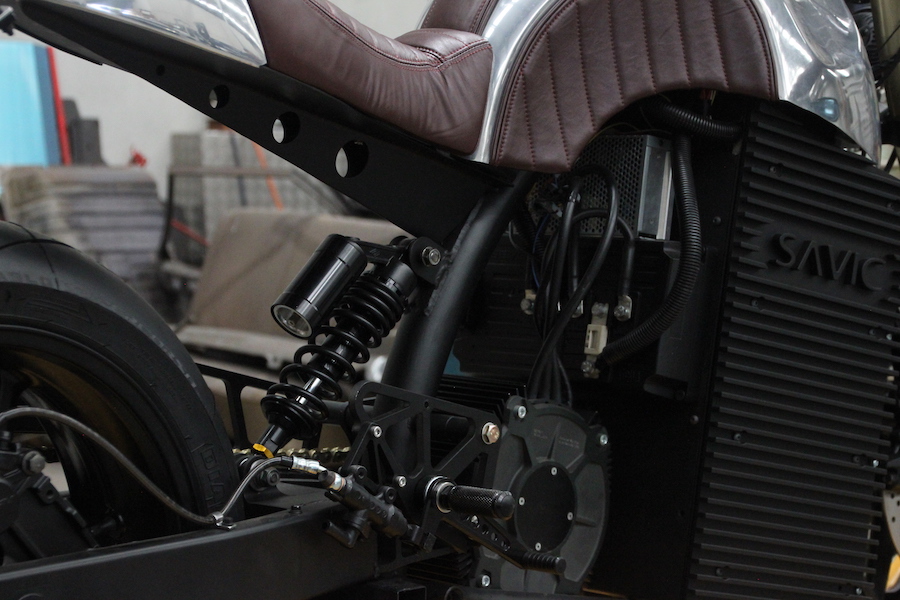 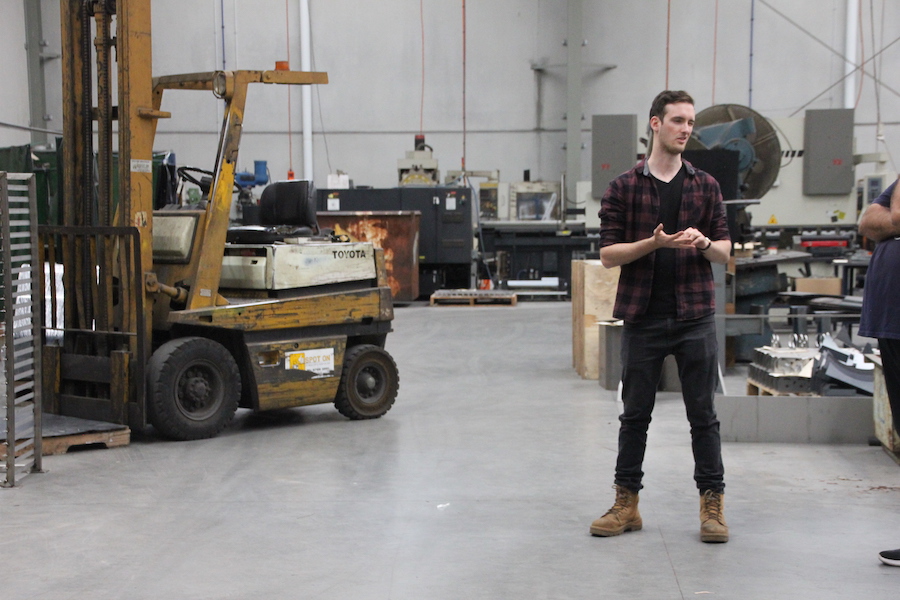 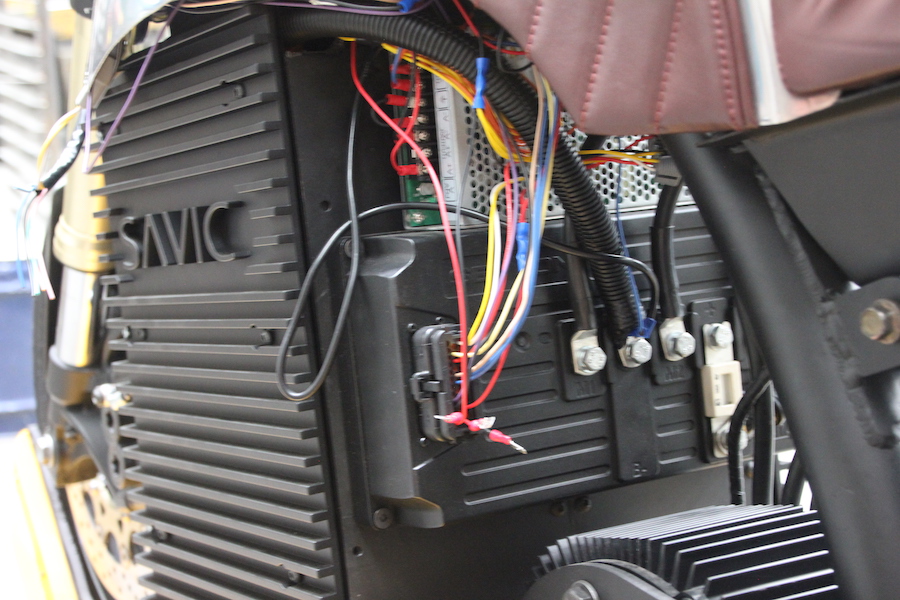 “But then they agreed it was the right decision and the right sacrifice to make and now they’re definitely two of the most supportive people in my life.”

No longer a self-funded dream, the young Aussie now relies on the support and belief of investors. In terms of what will be his second capital raise which he’ll campaign for this month, Savic understands it’ll be a difficult task, but with the same self-assured determination that has got him this far, he’s quietly confident.

“It is a challenge, but the reality is is we raised the money for 2018 in 2017 by committing to achieve four things,” he explains. “We achieved all those four things under budget and within the timeframe we said we were going to do it. On top of that, we started to develop a production powertrain with an overseas partner, we demonstrated market value and we got six orders!

“We definitely smashed it out of the park in terms of what the investors expected and what we promised, and we hope going into the next capital raise that that’s seen as favourable.”

And while in 2019, in an era where potential investors understand the the need for reduced emissions and environmentally responsible transport has never been more urgent, low emissions wasn’t a driving factor behind the ambitious project.

“Did we choose to develop a – in our opinion – sexy-looking vehicle based on low-emissions? No we didn’t,” he reveals. “Almost all of us are riders in the team, we love riding, we love bikes and we like good-looking bikes. We wanted to build a bike that really stood out and that looked totally different.

“Second to that it was electric, because we do like the electric side of things. The environmental benefit is a no-brainer, it’s there. I guess at our core, we’re design and passion driven, and the emissions side of things is really just a bonus.”

The goal to produce a good-looking stand out machine first and foremost really resonated with the Australian public, says Savic, who spent all three days of the expo fielding questions and interest from showgoers of which more than 70 were good enough to fill out his market research surveys. “The bike was really well received,” he offers. “We’re still processing the data, but my feel is that two to three percent absolutely hated it and the rest of the people who came by were really, really positive.

But with or without data, the fact that the project has 10 vehicles available for order and they received 16 expressions of interest within a single weekend speaks for itself.

“Going from no one knowing about us to having that kind of interest was really impressive – and a little surreal,” he says. “I think 90 percent of the surveys we collected showed that people want an Australian motorcycle and almost everyone was open to having an electric motorcycle.

“I really believe the concept that says people don’t want to convert from petrol to electric is maybe a little bit of a myth in reality.”

Savic will be hoping his read on the marketplace is spot on as he and the team have a long term target of reaching an annual production capacity off 5000 units which will be sold globally.

“The goal is definitely larger-style global production, but we do want to start with Australia initially,” he answered when asked who Savic Motorcycles’ target market is. “We want to start local, we want to make sure that we’ve developed a good product and a reliable product and we’ve identify anything that we may have missed through the development process. “We need to have all our Is dotted and our Ts crossed as far as reliability is concerned.”

And while right now he doesn’t have any Aussie-made electric motorcycle competition to speak of, the young Aussie is under no illusions there aren’t other determined dream chasers out there just like him, who have spent years penning and planning electric-powered vehicles.

“I wouldn’t be surprised if people come out of the works,” he says. “Because we’ve demonstrated market interest. But the reality is we’re building a brand that no other company can compete with because we’re electric focussed, that’s what we want to do, very similar to Tesla.”

Speaking of Tesla, in an era when vehicle manufacturing in this country is at an all-time low, it’s utterly intriguing why a highly intelligent and driven young man would want to risk launching a manufacturing start-up instead of having a goal to work for well-established brand like Tesla or Zero Motorcycles.

Utterly intriguing to you and I perhaps. But not to Dennis Savic. He looks up from his prototype C40 and says, “it is not impossible and that’s enough for me to charge at it head on, it’s just the way I was raised,” he states. “The business case is there, it’s entirely possible, so why not?

“We have a roadmap to get to that volume goal of 5000 units a year. It’s not impossible and we have a plan. That’s not to say it’s not going to be very hard or that competition isn’t going to come up, but we are going to try.”

And you can bet your bottom dollar that he’ll try and try again.