With snow-capped mountains, date palm oases and endless desert landscapes, Morocco is as exotic as you can get

When the Paris-Dakar Rally was run in Africa, mighty Morocco was regarded as the most ball-breaking section.

Facing 1000km of treacherous terrain over three days and 54°C heat in the Sahara Desert, many entrants never got to set their wheels beyond the North African sand dunes.

But ever since the world’s toughest race put the country on the global adventure map, conquering its 4000-metre snowcapped mountain ranges and coming face-to-face with a Bedouin (the largest tribes have as many as 3000 tents and 80,000 camels) is on many a rider’s bucket list.

AMCN grabbed the chance to go for a week-long tour along the country’s best roads with Wheels of Morocco – the only official BMW travel partner company in this part of the world.

There were twisting mountain passes, flowing dirt tracks, river crossings and a night in the dunes of the Sahara Desert – with camels and scorpions as companions.

The weather is balmy and sun-soaked all year long (average temperatures range from 13°C in winter to 29°C in summer).

Traffic is like nothing you’ve ever seen. But there’s no road rage (swearing is frowned upon and “you’re as stubborn as a donkey” is as hardcore as it gets), cars pull over to let you pass and kids in the countryside wave at you like they’ve just seen Rossi whiz past.

And dig this; motorcycles below 50cc don’t need to be registered and there are no laws forbidding you from hooning around on a beach – from pristine deserted shorelines to iconic locations comparable to the sands of
Bondi Beach.

There are enough weird contraptions – ranging from 150cc trikes and goat carts transporting mattresses and chickens stacked mile-high to full-blown desert racers – to film the next installment of Mad Max.

So let your imagination run wild here as we showcase the best Morocco has to offer. It’s crazy, magical and awe-inspiring. Tisdrin – a Berber name that means stairs – is one of the most winding mountain passes in the world. With 25 corners and sheer 150-metre drops, it’s also Morocco’s most photographed stretch of tarmac. Ride up and down it twice and you’ll get to do 100 hairpins within 5km. No wonder big-name manufacturers have shot promotional videos along this route.

The famous twisties are located between the Boumalne Dades oasis and the village of Msemrir along the dry and desolate Atlas mountain range. There’s a restaurant at the summit with panoramic views of the breathtaking valley and the Dades River below.

My favourite mountain section is a bit further west of these hairpins, between the Ozuoud waterfalls and the Ait Attab valley.

The 25km ride along the 3105, on the border of the Western High Atlas National Park, is like having a twisty racetrack to yourself. The grippy road surface gives so much confidence you’ll be scraping the ’pegs at every S-bend. There’s bugger all traffic and you can really give it the berries as most corners are gently sweeping, with easy-to-see vanishing points.

At the bottom of the mountain you can either cross a shallow river or ride across a single-lane plank bridge. You’ll be hooting and hollering inside your helmet, guaranteed. 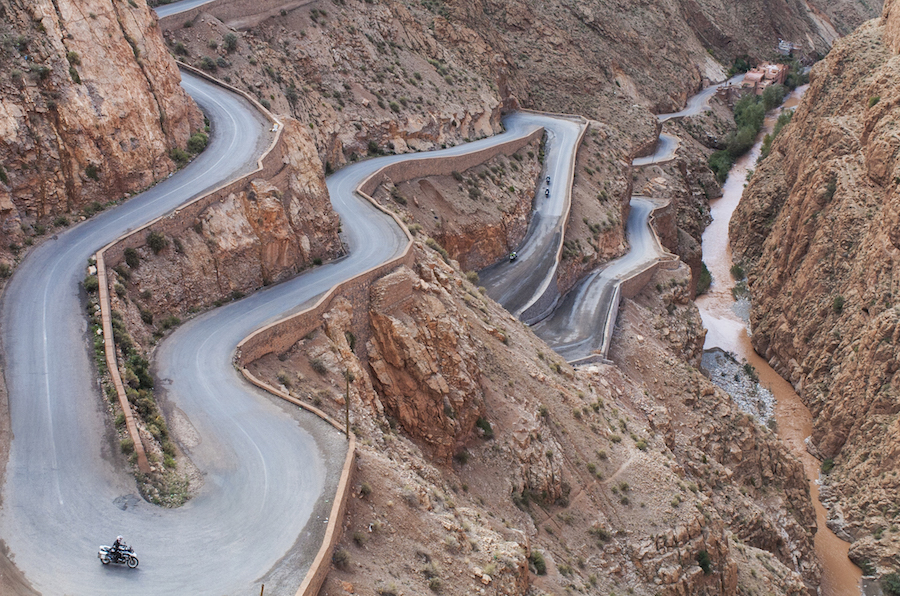 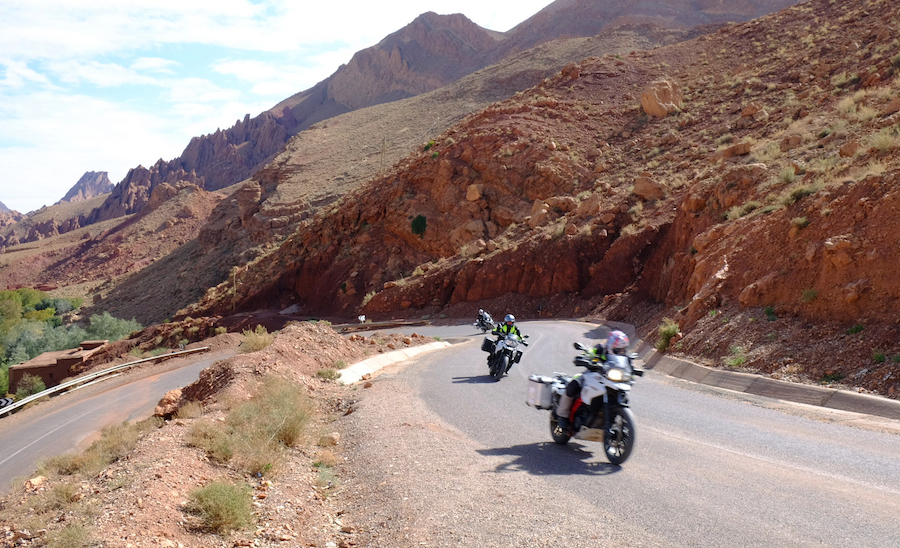 The first glimpse of the hidden palm grove comes as you break through thick vegetation – bordered by fig, almond and walnut trees – to emerge, unexpectedly, into a lush oasis brimming with wildlife and surrounded by rocky mountains. It feels like you’ve dropped into the Garden of Eden.

Reaching the oasis is an adventure in itself as the 7km access route is hard-packed undulating terrain resembling a rocky lunar landscape. We felt like 2016 Dakar Rally winner Toby Price winding it up to 100km/h as the rear Michelins scrambled for traction.

Ride across a pebble-floored creek (with Berber women washing laundry in the clear mountain water upstream) and onto a sandy path between a palm forest and the creek. A sudden left turn takes you back through the dense palm forest and alongside an abandoned and crumbling mud brick village, complete with a kasbah.

Our afternoon stop was a mountain-top inn with an outdoor terrace, giving incredible panoramic views of the oasis. Moroccan specialties of sweet mint tea and freshly squeezed orange juice were welcome refreshment, along with stuffed dates and flatbread. The bikes, parked nearby, made the comforting pinging noises that follow a hard ride. 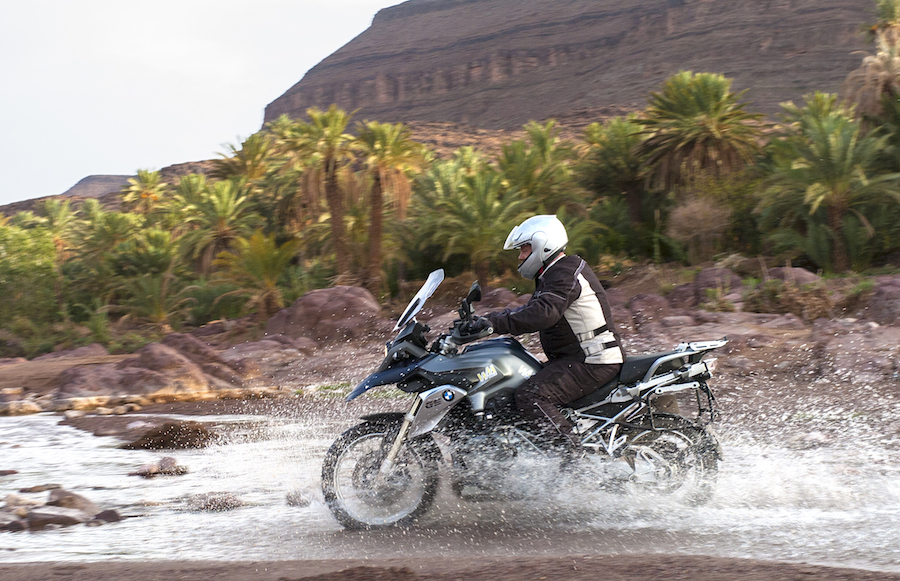 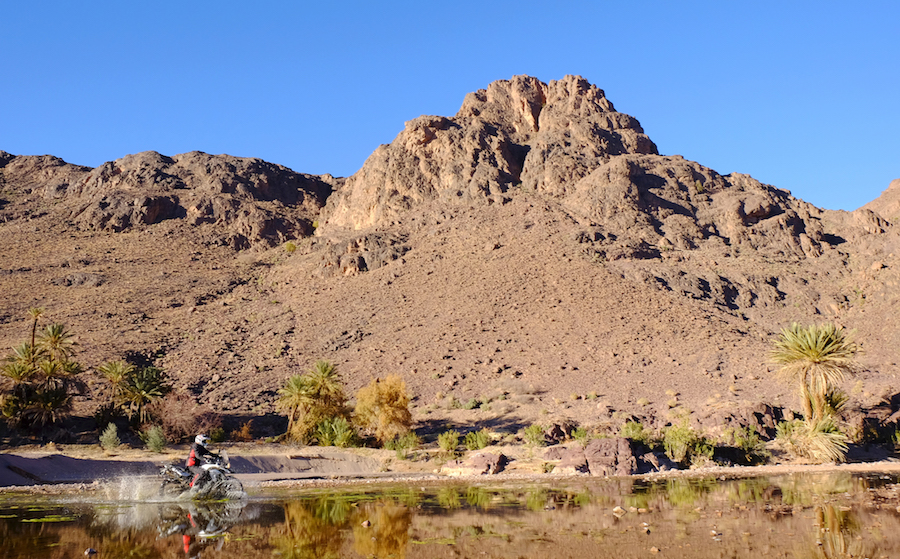 You’d be right in thinking this spectacular red-clay fortified village looks familiar – it’s been used in countless Hollywood films including Gladiator, The Bourne Ultimatum, The Living Daylights, Lawrence of Arabia and The Jewel of the Nile to name a few, as well as the Game of Thrones TV series. The walk to the summit, along winding narrow streets, takes about 15 minutes and is worth it for the views.

Ait Benhaddou lies at the heart of a former trading route between the Sahara and Marrakesh. It was a major stop for camel caravans carrying salt and returning with gold, silver and slaves. In its heyday, it had thousands of inhabitants, fortified towers and reinforced walls – with guards atop watchtowers. These days most locals, who make a living from the tourist trade, live in more modern homes on the other side of the usually dry riverbed. Medicines are scarce in this part of the world, so you could be asked for antibiotics in preference to money.

The ride to this 1000-year-old village takes you through landscapes resembling the Grand Canyon in the US, with stretches of straights and long sweepers surrounded by deserted red-rock formations.

The Atlas film studios in Ouarzazate are nearby, and open to tourists, but you’ll need lots of dosh and paperwork if you want to follow in the footsteps of Jeremy Clarkson and The Grand Tour by doing wheelies and burnouts among the sets of Egyptian palaces and crocodile-head sphinxes. 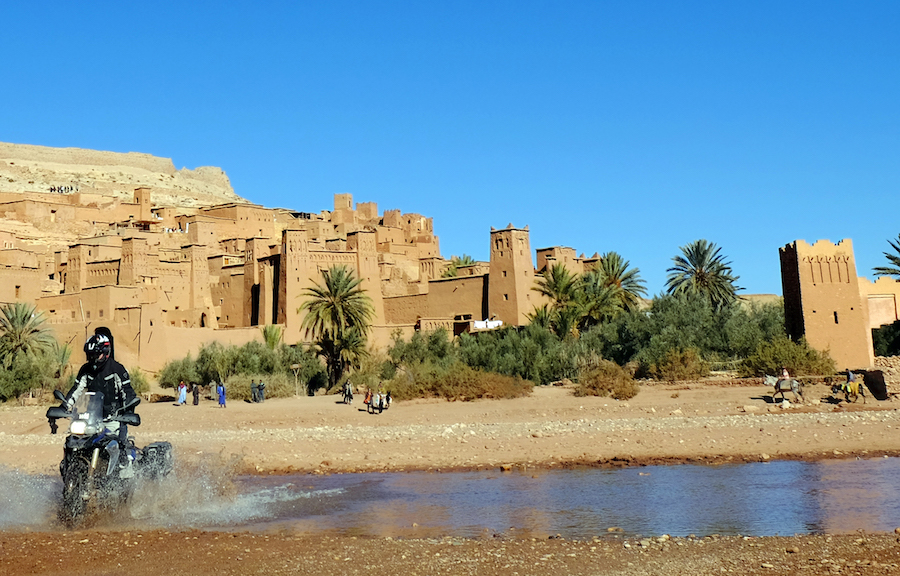 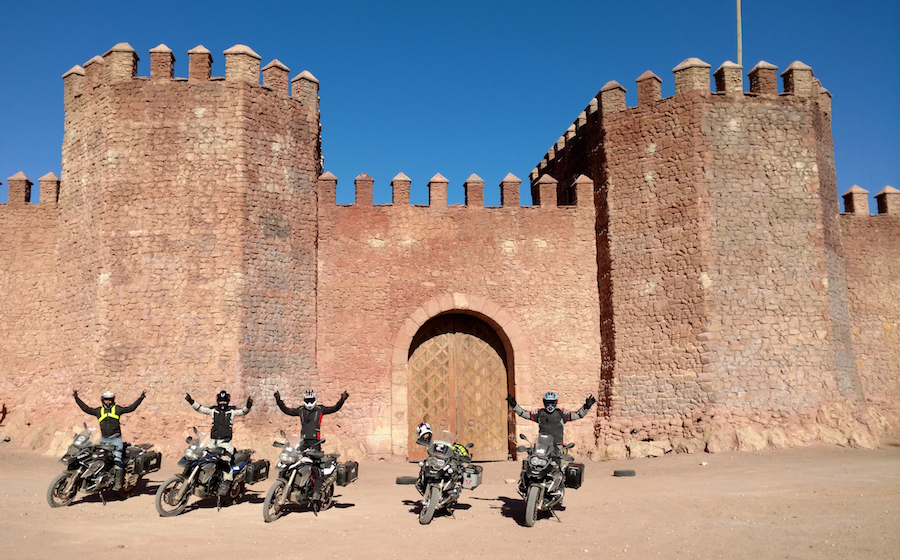 Built by the elite French Legionnaire forces in 1927 to open a new route to the south, this 62-metre spiral tunnel between Er-Rich in the north and Erfoud on the edge of the Sahara took a workforce of 3000 men five months to dig through solid rock – using five tonnes of explosives, 16 hammer compressors and 50,000 litres of fuel.

The 80km-long canyon that runs alongside was created by the Ziz River cutting a wide path through the Atlas Mountains. It’s a large date-growing region dotted with tiny Berber villages and surreal clusters of palm trees along the dry river bed.

The smooth winding road leads to the massive Lake Al Hassan-Addakhil. Along the way you’ll spy soaring birds of prey hovering on the updraft, alert for a potential kill. The long flowing corners cut into the edge of the mountainside beat any video game for thrills and the scenery is phenomenal, with a dizzying drop into the Ziz gorge on one side and soaring red cliffs on the other.

Traditionalists will be heartened to know it’s a Moroccan custom to give a big wave to other bikers. If they’re in a group they’re likely to be fellow tourist adventurers, but even solo riders are worth your recognition. On our way to the famous tunnel we befriended a Fonzie lookalike at a petrol station who turned out to be a priest from Texas, riding a customised Harley-Davidson Roadster 500km to a mate’s place for the weekend. We also met other Aussies with amazing tales to share. Abandoned lead and quartz mines lie on the outskirts of Erg Chebbi – a sea of 150-metre high dunes created by wind-blown sand. The route into this forgotten part of the world takes us through a deserted mud-brick village that once housed hundreds of miners and their families. The military keeps a small outpost here and a group of soldiers casually smoking beside a camouflaged Hummer give us a cheery wave.

The open-cast mines are scattered along a high plateau with dramatic views of the desert landscape. There’s also a Berber graveyard nearby, no doubt containing many miners. The jagged rock headstones have no names, though you can tell the gender by the way the stones are positioned – two placed parallel denotes a woman, while two stones placed in a T-shape is a man.

The original Dakar Rally route once snaked its way past this ghostly village as riders screamed towards Ourzazate during a monster 400km stage.

The challenging terrain around here is made up of hard-packed soil with fist-sized jagged rocks that would rip
man and machine to shreds. The even more challenging sand dunes are just around the corner.

It’s mind-blowing to imagine the average speeds and unwavering commitment you’d need to be a podium contender. To put it into perspective, we did 2000km of predominantly sealed roads in a total of 60 hours (six days of riding).

These guys did well over 3000km of timed sections, over the harshest terrain imaginable, in just 48 hours. 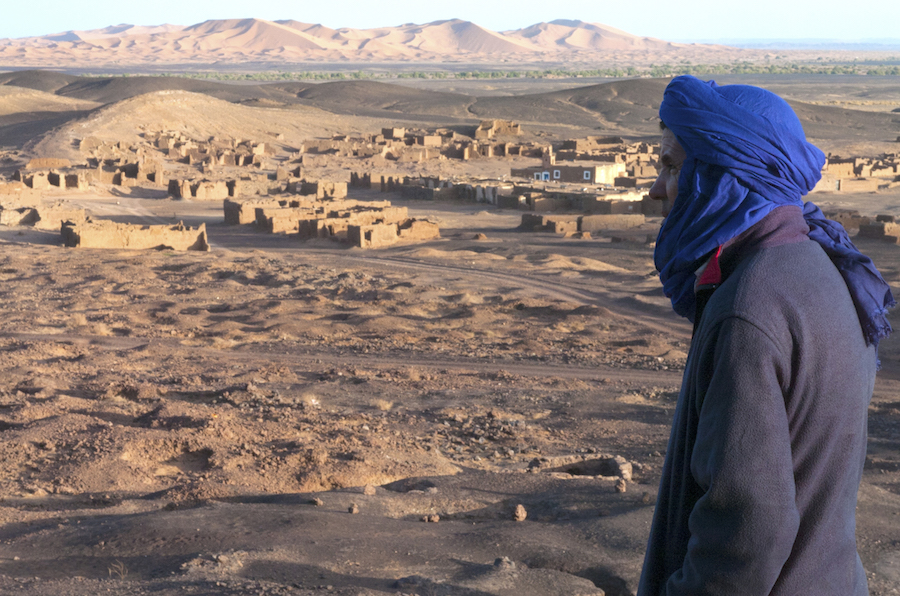 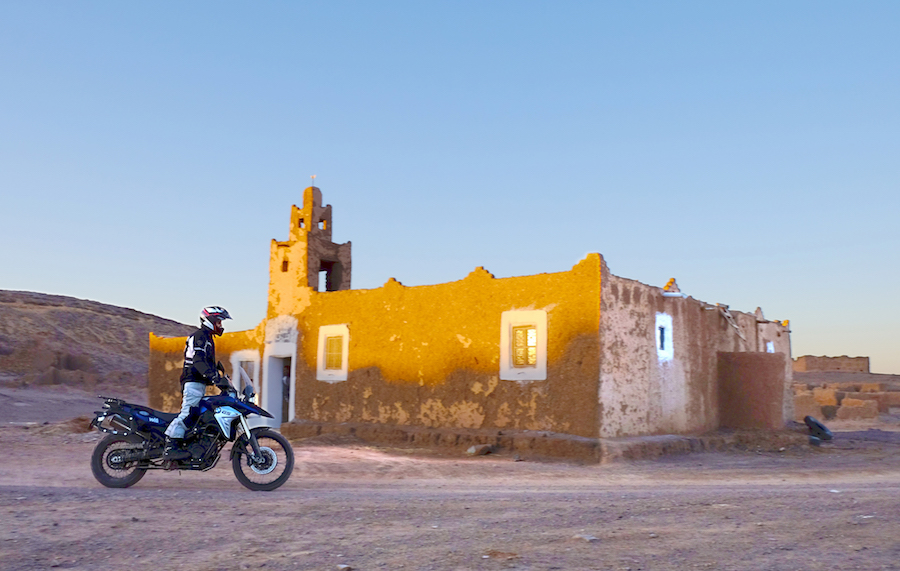