It is a century since George Brough didn’t, coin the cherished ‘Rolls-Royce of Motorcycles’ slogan that he used to promote the prestigious range of high performance motorcycles. He didn’t have to; a Motor Cycle magazine road tester of one of his early bikes did it for him.

It’s a mark of the respect with which his products were held in the pre-WW2 era that nobody ever questioned the validity of such an implicit boast. Until, that is, one day a man from Rolls came calling, requiring Brough to cease and desist from infringing his company’s trademark, else there’d be legal retribution…

To mark its 2019 centenary, manufacturing is now under way in France of historic British trophy marque Brough Superior’s limited-edition Anniversary model unveiled at last year’s EICMA Show, of which somewhat inevitably just 100 examples will be built costing – what else? – 100,000 euros (A$161,000) each, including 20 percent French tax (so, 83,350 euros tax-free for non-EU customers). So far the recently revived company has delivered 48 examples, with further orders coming in all the time, says Brough boss Thierry Henriette, who states that just 38 such bikes to be built are still looking for owners.

But why in France? Well, four years ago, back in 2015, a two-wheeled version of the Anglo-French Entente Cordiale resulted in the legendary Brough Superior marque commencing production in France of the first new high-performance streetbike for more than 75 years to carry the iconic British brand’s badge on its tank. This came after today’s owner of the Brough Superior trademark, Austrian-based Brit Mark Upham, had earlier licensed famed French designer Henriette, owner of Boxer Design in Toulouse, to create the all-new SS100, which made its public debut at the 2013 Milan Show to mark the 90th anniversary of the model’s introduction.

Since then, Henriette and his colleague Albert Castaigne have relaunched Brough Superior as a manufacturer of high-performance, high-quality (and inevitably, high-priced) motorcycles. Despite their retro styling, they employ modern engineering, high-class materials and radical design features. Powered by an 88º V-twin engine especially developed for Brough by Akira Engineering in Bayonne, France (the builders of the Kawasaki ZX-10R motors that power Jonathan Rea’s ongoing domination of the World Superbike series) production of the born-again Broughs has gradually gained momentum over the past four years in the ultra-modern 2000m² Boxer Design factory in Toulouse, now rebranded as Brough Superior’s new home.

Henriette has experience of bringing a bike to market, only to be stymied when his engine supply dried up. So he has safeguarded against Brough Superior suffering a similar fate this time around, by ensuring it now builds its own dedicated engine itself in-house.

“We’re building bikes in batches of 10, so we always have the 10 engines and chassis kits we’ll need for the next batch ready and waiting for that to commence,” says Thierry.

“In the case of the Anniversary we also have many special components we make ourselves here in the factory ready to adorn the bikes as a celebration of the handmade excellence, which characterised Brough Superior during its earlier lifetime.”

The liquid-cooled 997cc V-twin motor measuring 94 x 71.8 mm is a fully load-bearing chassis component, with a small titanium upper space frame bolted to the cylinder heads to locate the front suspension. Running 11:1 compression, this eight-valve power unit with composite chain/gear-driven double-overhead cam delivers a claimed 75kW (102hp) at 9600rpm in Euro-4 compliant guise, with 87 Nm of torque peaking at 7300rpm. As with the SS100 and Pendine, you’ll be able to order a higher-output track-only version producing 130hp and 120Nm instead.

There isn’t a huge amount of grunt low down on the street legal version, so you must use the six-speed gearbox to keep the V-twin engine revving, and the Anniversary motoring. But working the slick-shifting transmission with its very light clutch action is all part of the fun of riding the new Brough, even in towns or cruising along in a line of traffic, and it is indeed a really enjoyable ride if you can forget for a moment what it costs. Though it has an old-style cable throttle, so there’s no choice of riding modes as would come with ride-by-wire, the low down mapping of the Synerject EFI is really excellent, with spot-on fueling delivering a smooth pickup from a closed throttle, and a linear power delivery as revs mount. Even with no balance shaft vibration is minimal, presumably thanks to the 88º cylinder angle chosen to allow a more compact frame installation, by saving 30mm across the top of the cylinders. The whole motor feels even more refined than the Pendine Sand Racer I rode a year ago, which wasn’t exactly snatchy,

Most immediately eye-catching of the many distinctive features on any modern Brough Superior is the Anniversary’s front suspension, which combines a retro appearance with ultra-modern design. It’s based on the wishbone fork system created and raced to points-scoring finishes in the 1979 FIM Endurance series by French engineer Claude Fior (some two years before the first bike bearing the similar Hossack design was created), who then went on to develop his own Marlboro-backed four-cylinder bike complete with the fourche Fior for 1978/79 500GP racing.

There’s a constant reminder that you’re riding something completely different in terms of front suspension by the way the tinted flyscreen atop the wishbone fork link rises and falls in front of you, as the fully-adjustable Kayaba shock operated by the Fior fork eats up road rash. Despite its rangy 1530mm wheelbase the Anniversary changes direction pretty well, without any undue effort needed to prise it away from its sure-footed line in a turn. It’s a confidence-inspiring ride, and everything seems well controlled, with good ride quality thanks to the 130mm of rear wheel travel (120mm up front).

The Brough Superior’s brakes are equally leading edge, with no less than four Beringer 230mm aluminum-ceramic composite floating front discs, doubled up in two pairs, each gripped by four-piston radial calipers employing special sintered metal pads to stop a bike weighing 186kg dry with a balanced 50/50 weight distribution. They work well, and aren’t at all snatchy, so having this many discs isn’t overkill, and the reduced rotating mass helps sharpen the steering as well as aid in appearance.

It’s a forgiving but practical setup – not only can you grab a handful of front brake once leaned over and fully committed to a turn, but neither will the bike sit up and head for the hedges if you do so, as some other sportbikes with flawed steering geometry surely will. And the two-channel Continental ABS works well, without cutting in too early on smooth sunbaked stretches of tarmac. It just works when it should, and not too intrusively. Job done, messieurs… The ongoing mods that Henriette and Co. have wrought on the 88º V-twin motor have made it even more refined and rideable than the already excellent Pendine with the identical level of tune which I rode last year just as it reached production. On the Anniversary there’s still plenty of poke and enough power to thrill, but it’s the smooth, accessible way that it’s delivered which is even better than before – and it was already pretty good – coupled with peak torque of 87 Nm at 7300rpm on this Euro-4 compliant motor, which delivered peak power of 75kW at 9600rpm.

The pickup from a closed throttle is even smoother than before without being lazy, though the engine will drive cleanly in top gear without any transmission snatch towards the five-figure rev limiter from as low as 2000rpm on the hard-to-see tacho reading in the huge Smiths-style speedo’s small digital panel. This also shows engine temp and mileage/trip if you thumb your way through it, but not a gear-selected readout, which is a pity. If an entry-level KTM 125 Duke can have this, a Brough Superior should too – especially a 100K one.

And while I’m complaining, the starter button and direction signals remain way too small and awkward to use with gloves on. Plus there’s still no fuel gauge incorporated in the speedo-cum-dash – just a warning light.

But as against that, the six-speed gearbox is flawless in its operation, neutral is now easy to find, and the clutch harnessing that acceptable level of torque as well as the hundred horses of power, is unbelievably light in action – that KTM 125 Duke’s is probably heavier!

Yet the Anniversary doesn’t sound anything like a Ducati, more like an Aprilia RSV1000 with its 60-degree  vee; it definitely has a higher pitched, more offbeat lilt issuing from that dramatic-looking quartet of exhausts at its 1400rpm idle speed. But get it motoring, and there’s an extra kick of power above 6000rpm en route to the 10,000rpm redline, so it’s definitely rewarding to wind the revs up.

My favourite modern Brough remains the peerless Pendine, which is powered by the same engine in a similar state of tune. At ‘only’ 60,000 euros in France, including 20 percent tax, that model is practically a bargain compared to the 100K Anniversary, or even against 63,500 Euro
for the SS100.

As a former Brough Superior owner from back in the mists of time (before such bikes made telephone numbers at auction) it would be nice to rejoin the BS owners club – but somehow I don’t see that ever happening! Still, we can all dream… 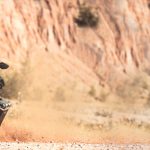