While us grown-ups stand around arguing over the place of electric bikes, the little ones are moaning “I’m bored!” and tugging at our sleeves demanding something to do. Now, instead of letting them plug back in to the Playstation, iPad or whatever, there is another rechargeable device they can play with…

The YCF50E is the companion of the 50A (AMCN Vol 65 No 08), aimed at kids aged three to seven. Though the two bikes share the same dimensions, the key difference is that one has a 50cc engine, the other a 1200W motor. It may seem an exaggeration to call that game-changing, but hear me out.

First, there’s the noise, or lack thereof. For those of us blessed with hectares of wide open space in our backyard, this won’t be an issue, but if you live on a smaller property you’ll know the neighbours don’t usually take kindly to the incessant buzz of a petrol engine. With an electric bike, yards that were once too small become realistic options for riding. 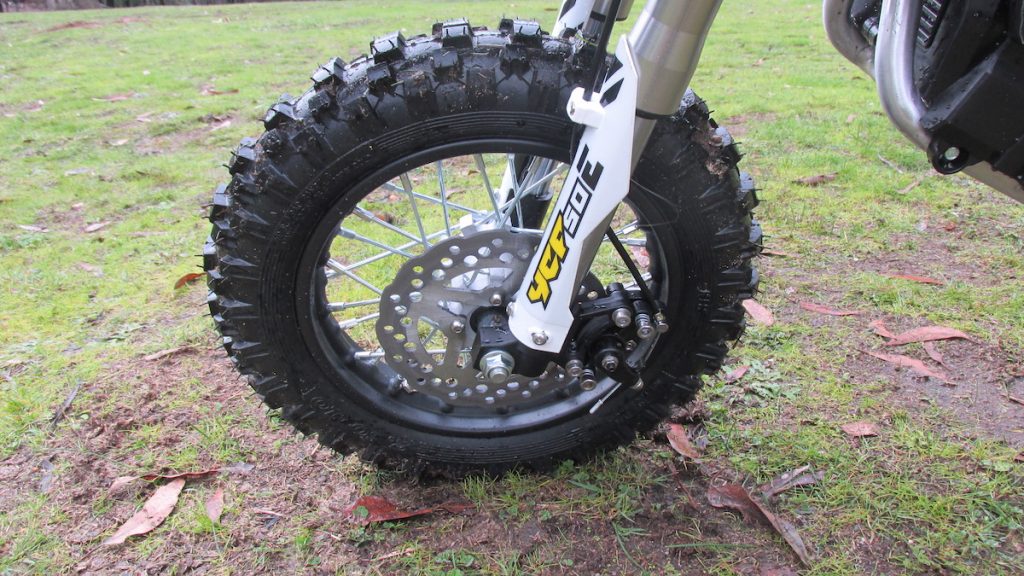 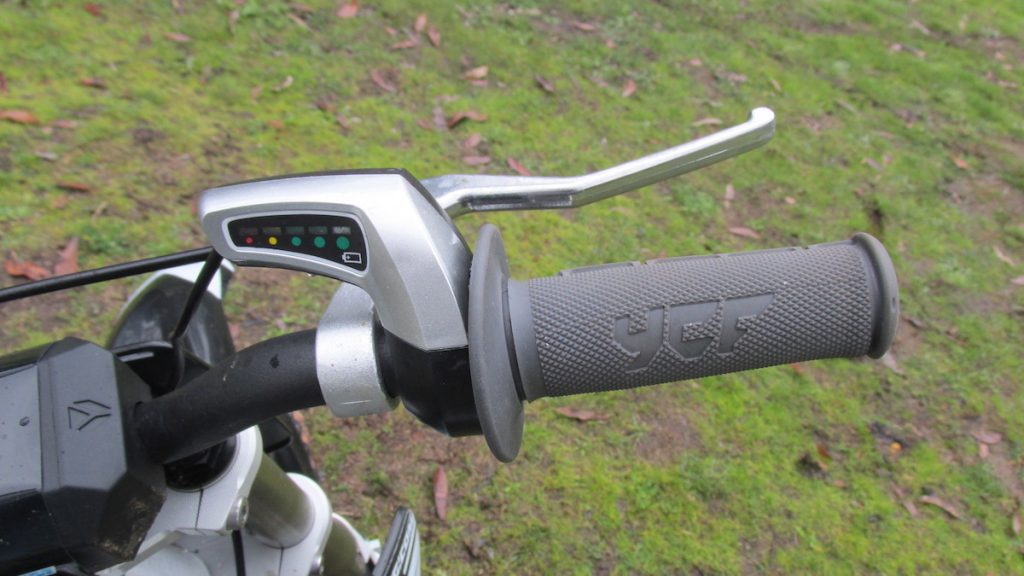 Also worth considering is how kids respond to the sound of the motor. While many adults have happy memories of early days on two wheels and love the scream of a single, my six-year-old son Malki said he preferred the silence. And his teacher on the day – Paul Bray from Go2Wheels – reckons it can be easier for little learners when they have one less distraction. The controls are certainly child’s play: a kill switch on the left with rear brake replacing the clutch, and the usual throttle and front brake on the right, complemented by a meter showing how much charge is left. When you see that big green light glowing, you can count on around 1.5 hours of operating time (though Paul reports that depending on use it can last for about as long as a tank of petrol on the 50A). Recharging is simple – just plug it into a normal wall socket for six hours, and away you go.

And how does it go? Well that’s really up to the owner. The YCF50E has a ‘potentiometer’ located just below the seat which can be easily adjusted with a screwdriver. But be warned, a little twist makes a big difference. My boy Malki is a bit brake-shy, so Paul turned the potentiometer right down to begin with. After he’d got the hang of some slow speed manoeuvres, I gave it a quarter turn and that was enough. Turn it right up and you might be in for a surprise – thanks to the instant torque of the electric motor, the 50E will sizzle its petrol partner off the line. In other words, make sure you keep that screwdriver in your pocket. When things do get more frantic, the 160mm single disc at the front and back will pull the bike up easily. This, the decent suspension set-up and high-quality lightweight lithium battery mark this apart from electric ‘toys’ you might have seen at your dealership.

The YCF catalogue offers plenty of bling, including brightly coloured chains and grips, a 280mm shock absorber, and training wheels. We’re not convinced that the last of these is a good idea. They can get stuck in a rut, causing the back wheel to become airborne and spin before touching back down and sending your young trailblazer flying. Paul Bray echoed that sentiment – kids should ideally be able to balance on two wheels before they start getting into motorbikes. One strange feature on the YCF50E is the petrol cap, which obviously comes with the standard chassis shared with the 50A. It’s even got a cavity underneath it, so if you’re not paying attention something untoward might get poured in there – cordial suggested one bright young spark.

Despite the obvious advantages of electric bikes in this market segment, the number of players is still surprisingly small. The Japanese giants who have previously dominated the kids’ traillies market are yet to jump in with electric bikes; other offerings are more trials focussed. With a range of bikes all under 200cc, French company YCF specialises this area and looks to have got its timing spot on. If you’ve got the cash to splash and, like me, you’d like your kids to spend more time in the great outdoors, it might be time to start saving for that big Christmas present.

Throttle adjustment: Easily restricted via a potentiometer screw on the electric motor