Okay, I admit it. I have a thing for retro bikes. Retro bikes done right, that is, with their proportions spot-on, a nicely sculpted fuel tank, a stylish exhaust system, a big round headlight, a twin-shock rear-end… you get the picture. But the trouble with many retro bikes is they come with retro performance. Not so this  2022 Triumph Speed Twin 1200 RS. As well as those old-school good looks, this thing goes… and stops and turns, and quite bloody well, too. 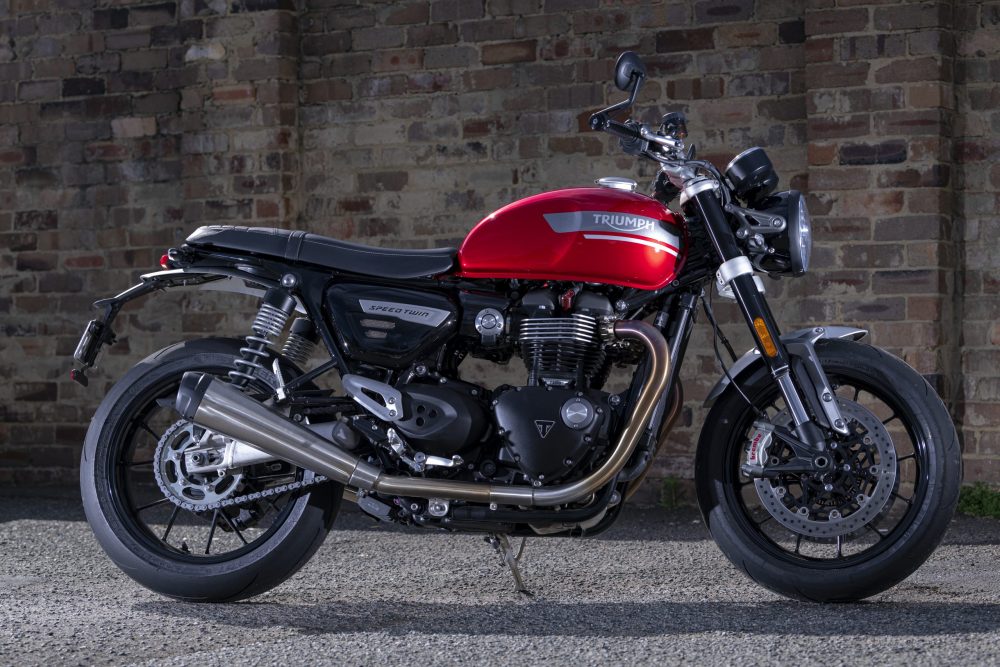 When it comes to retro, Triumph has plenty of heritage to draw on, and the company has milked those famous names for all they’re worth. The current line-up of Bonneville models consists of the T100 and T120, Scrambler 1200, Speedmaster and Bobber, the Street Twin and Street Scrambler, the Thruxton RS and, of course, the Speed Twin 1200 RS we’re testing here. 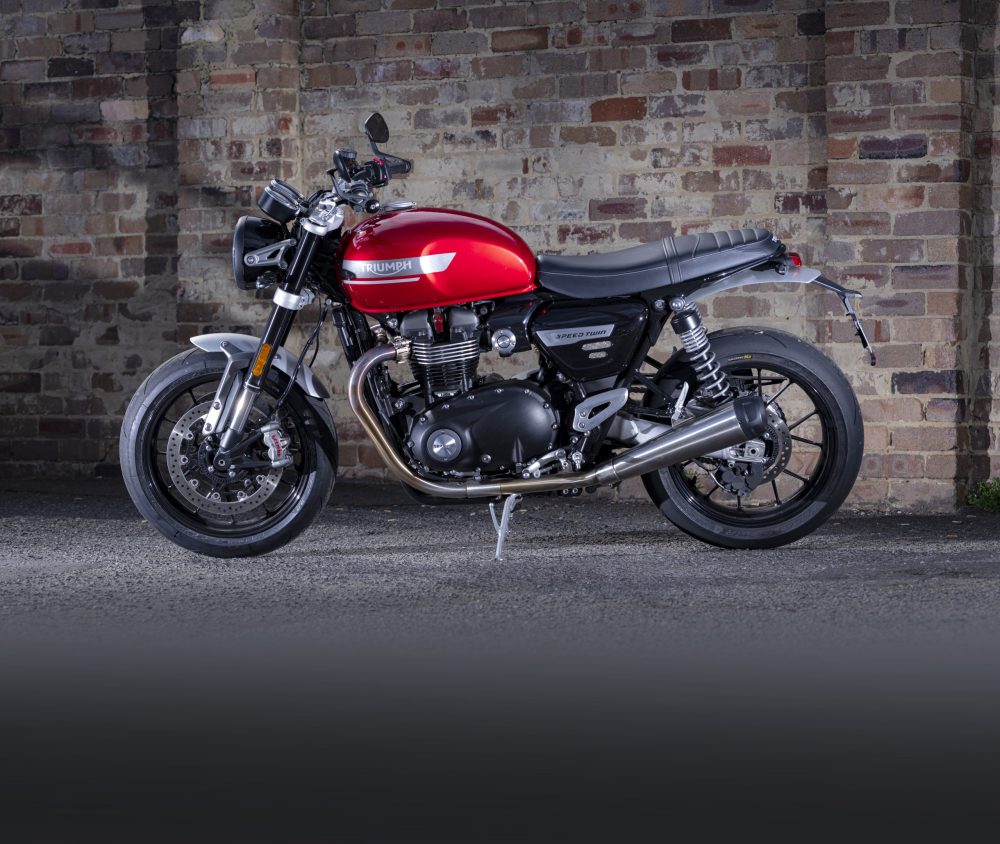 In name alone, the Speed Twin is probably the most apt for the retro treatment, as that is the name given to Triumph’s first parallel-twin model launched in 1938. The bike was considered revolutionary at the time, and production continued after the interruption of WWII, with the Speed Twin being further developed until the demise of the nameplate in 1966. 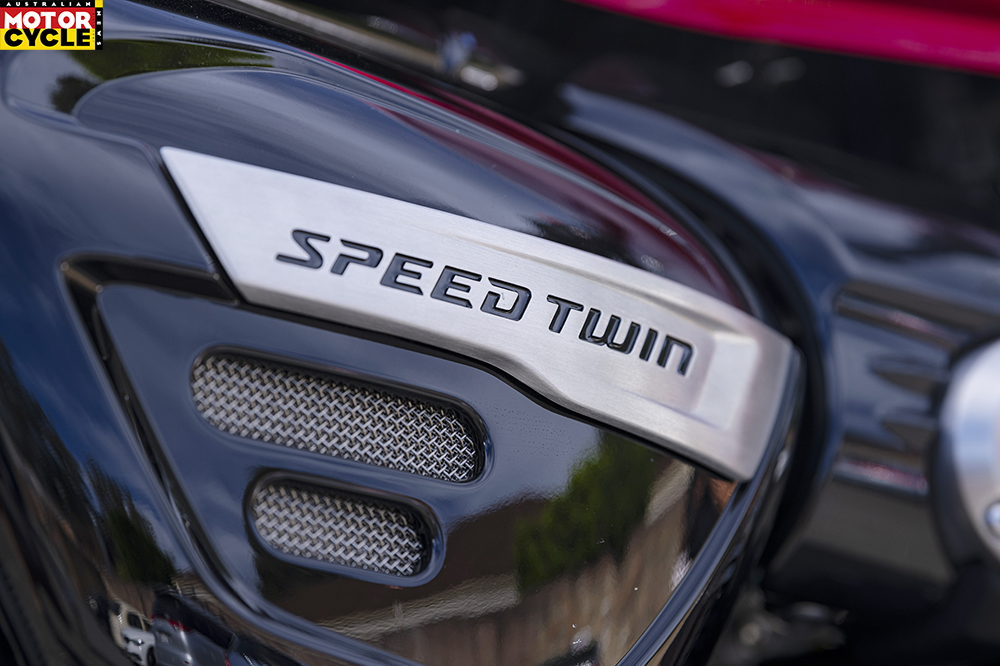 The Speed Twin name was resurrected by the modern Triumph Motorcycles in 2019 and this latest iteration was significantly updated last year to meet Euro-5 compliance. Other 2021 upgrades included chassis tweaks and fitment of M50 Brembo brake calipers, a Marzocchi fork and sticky Metzeler Racetec RR tyres. That’s some high-end performance gear for a retro bike. But with its 1200cc parallel twin pumping out a handy 73.6kW (99hp) at 7250rpm and a meaty 112Nm of torque at 4250rpm, why not make the thing handle and stop as well as it goes… and looks? 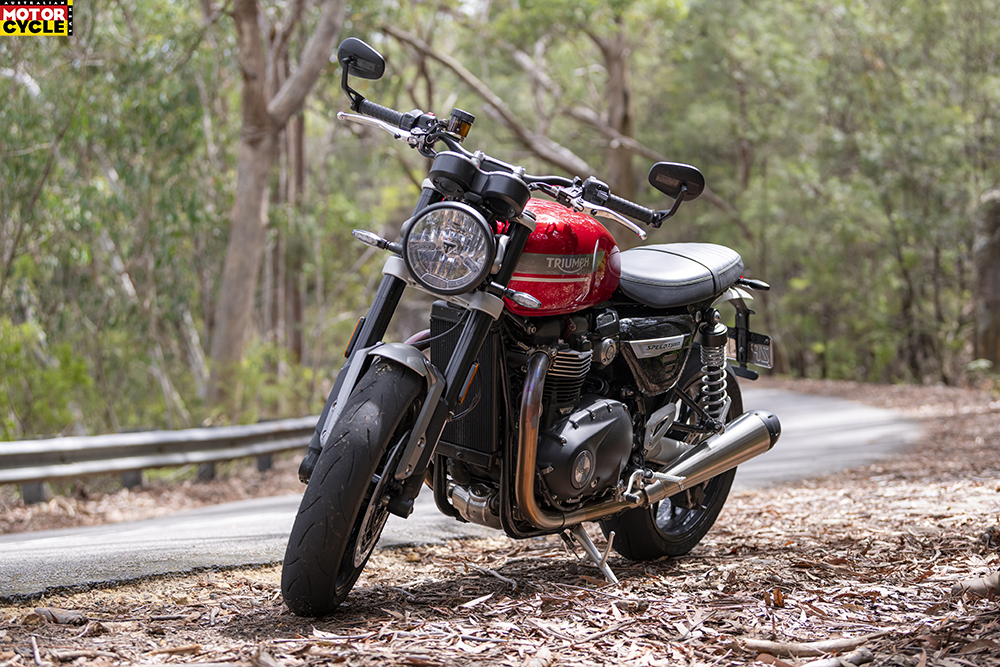 Yes, back to those looks. I reckon if you went up to a random on the street and asked them to draw a picture of a motorcycle, they’d come back with something that looks just like the Speed Twin; two wheels, an engine, a fuel tank, a seat, a handlebar and footpegs… and that’s all she wrote, folks. 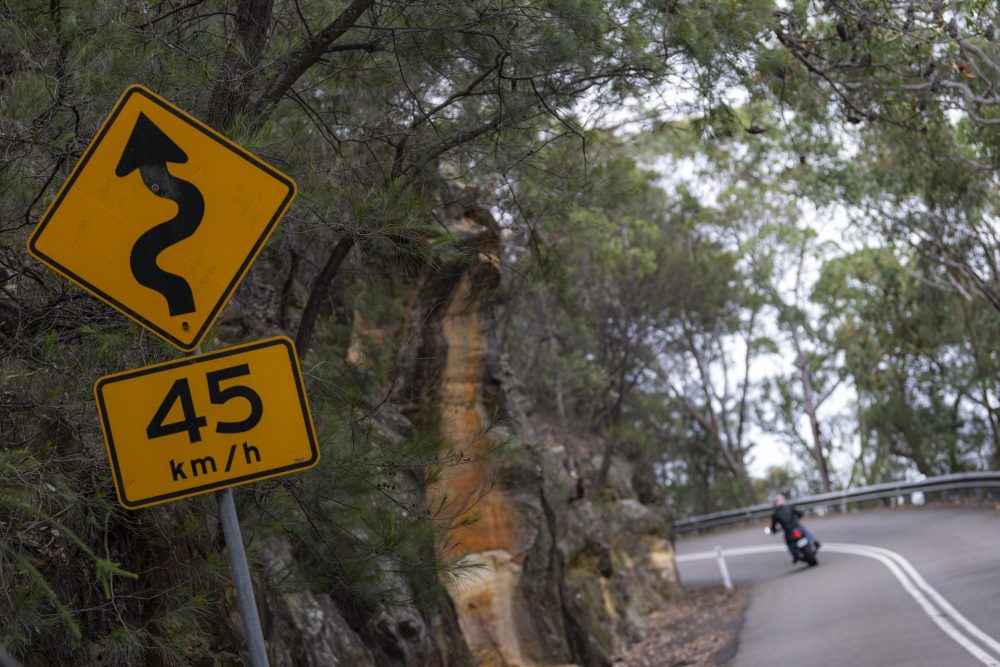 I bloody love the simplicity of the design, and I also love the detail features, such as that bright-red fuel tank, the basic black seat with its contrast stitching, the mesh bits in the side-plates, the minimalistic brushed-aluminium mudguards, the round headlight with the Triumph logo in the middle, the traditional-looking analogue gauges, the brushed-aluminium fuel-cap cover, the small LED taillight and indicators… 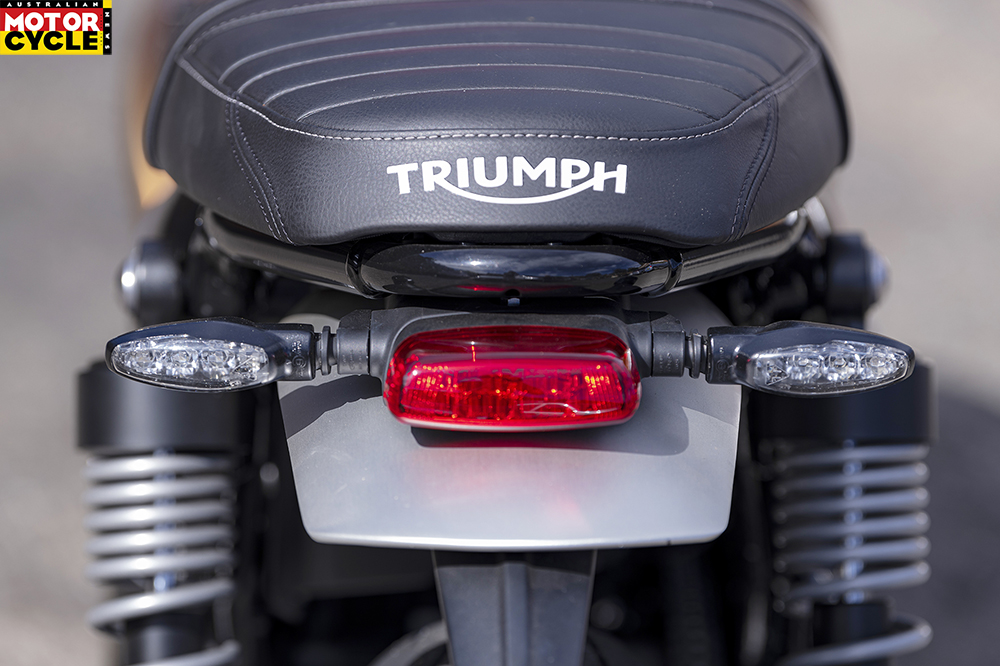 And then there’s the stuff that doesn’t stand out, like the exhaust system’s catalytic converter and the thin black radiator that sits neatly ahead of the black frame tubes. 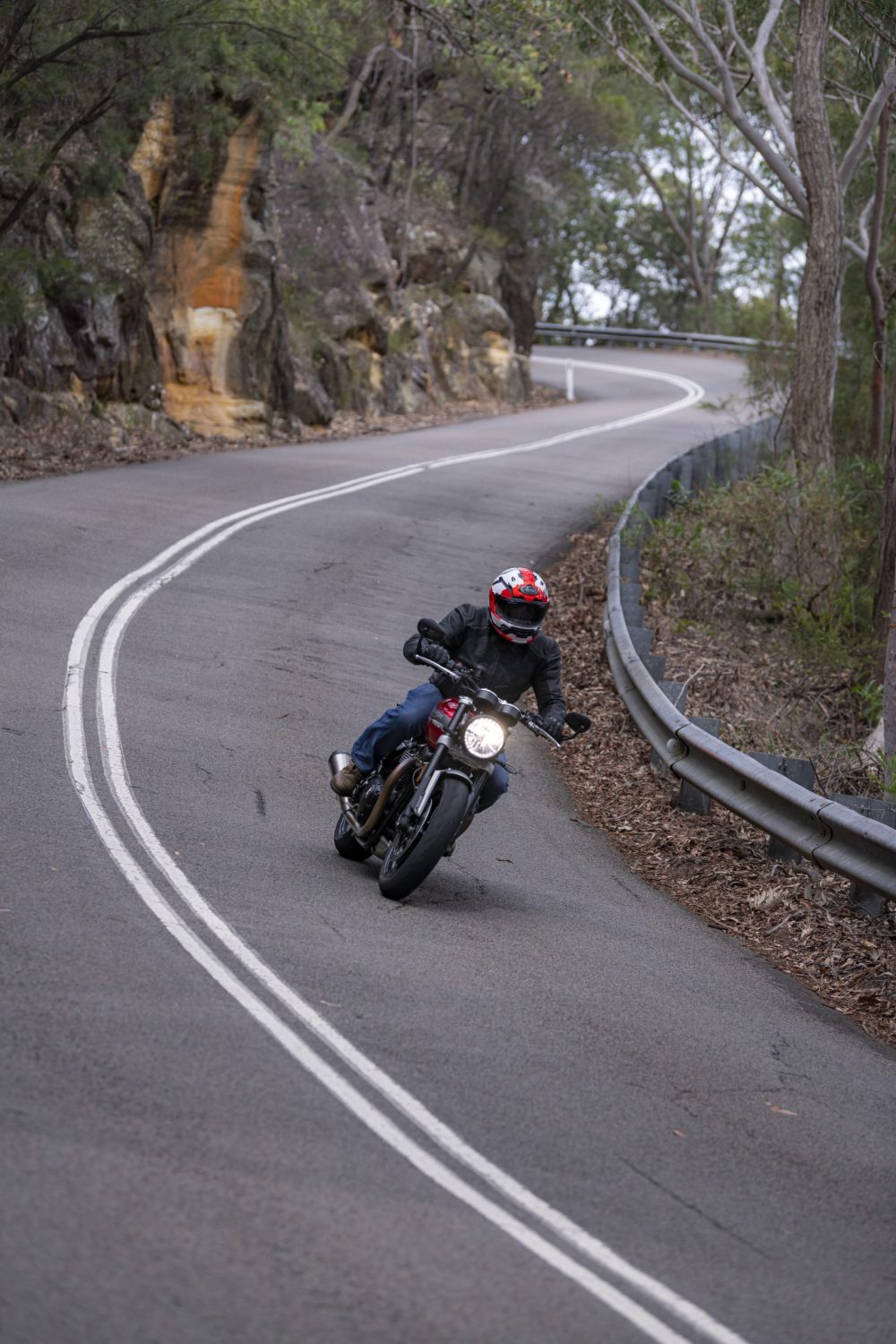 For the record, that Red Hopper fuel tank adds $300 to the base price, likewise if you opt for Matt Storm Grey; the standard colour is Jet Black. But no matter what colour you choose, the Speed Twin looks the goods, and it drew several admirers over the two weeks I had it on test – apparently, I’m not the only one smitten by its looks – and some of those who pored over it showed genuine surprise when they realised it packed a 1200cc powerplant. 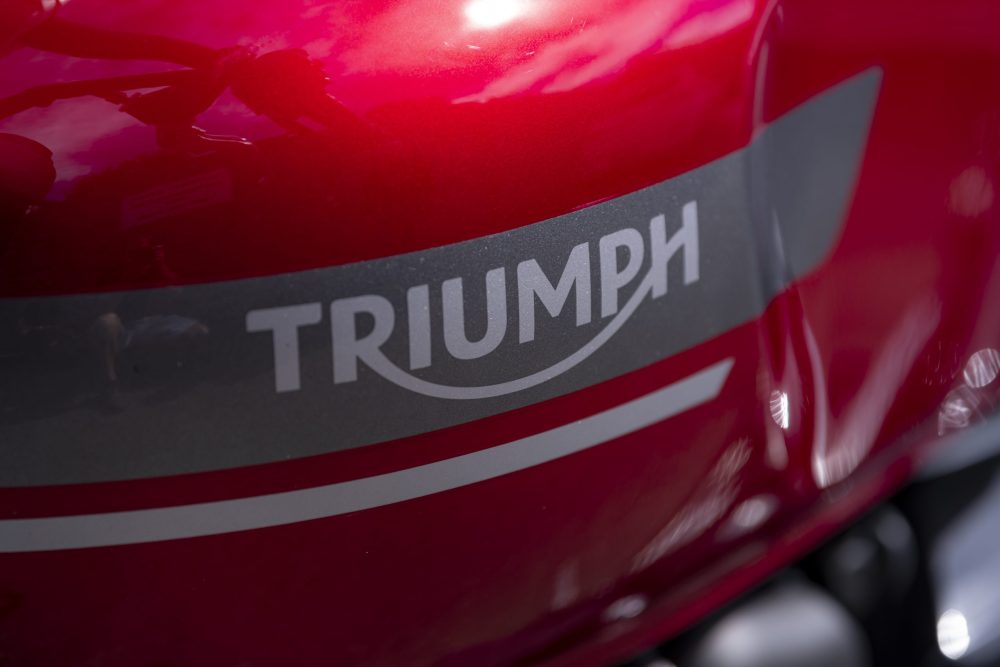 And what a pearler of an engine it is. A button on the left switchblock gives access to Sport, Road and Rain modes, all of which allow you to access the full 74kW, but with different throttle mapping to suit conditions. Most of the time you’ll find yourself switching between Sport and Road, the former with a more abrupt throttle response and the later well suited to cruising around town. 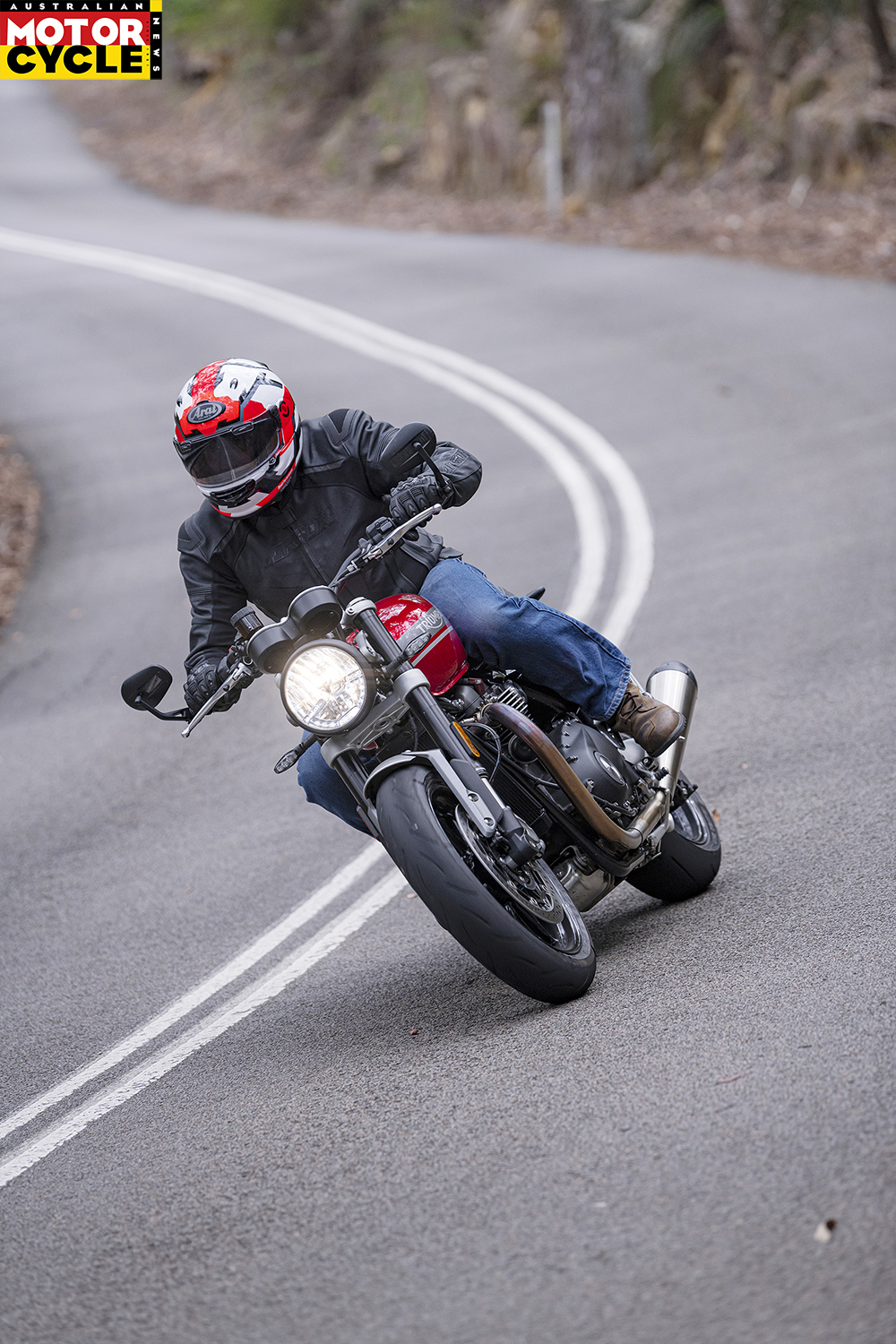 In this age of 200hp-plus sportsbikes the Speed Twin’s relatively modest 99hp output might not seem all that spectacular but, make no mistake, this is still a quick roadbike that will go beyond 200 clicks without breaking a sweat, and it will do it in a surprisingly easy manner thanks to the abundance of low-end torque and the accessible power throughout the rev range. In fact, it will leap out of slow corners in third gear that will see a higher-revving sportsbike running in first or second, and the fueling is spot on. Once revs pick up, there’s plenty to play with in the midrange, and there’s no noticeable tapering-off even as the tacho needle nudges the redline. 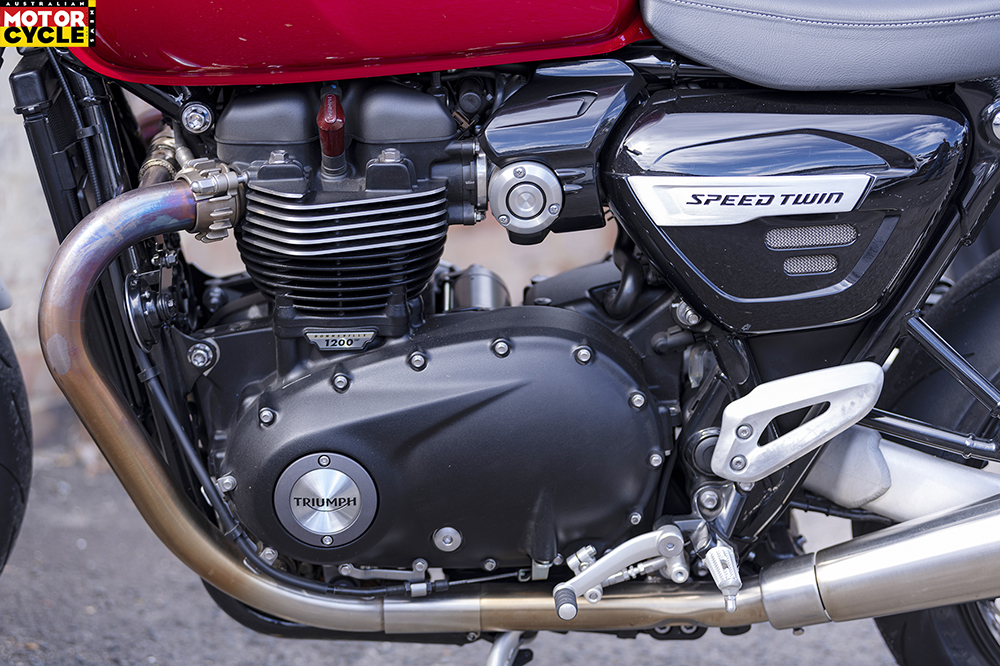 The six-speed gearbox isn’t the quickest shifter around but the gearchanges are positive up and down the ratios, while the clutch has a progressive feel to it that aids quick getaways from standstill. The gearing is spot-on too, with a nice spread of ratios and a top gear that’s tall enough for relaxed highway touring. 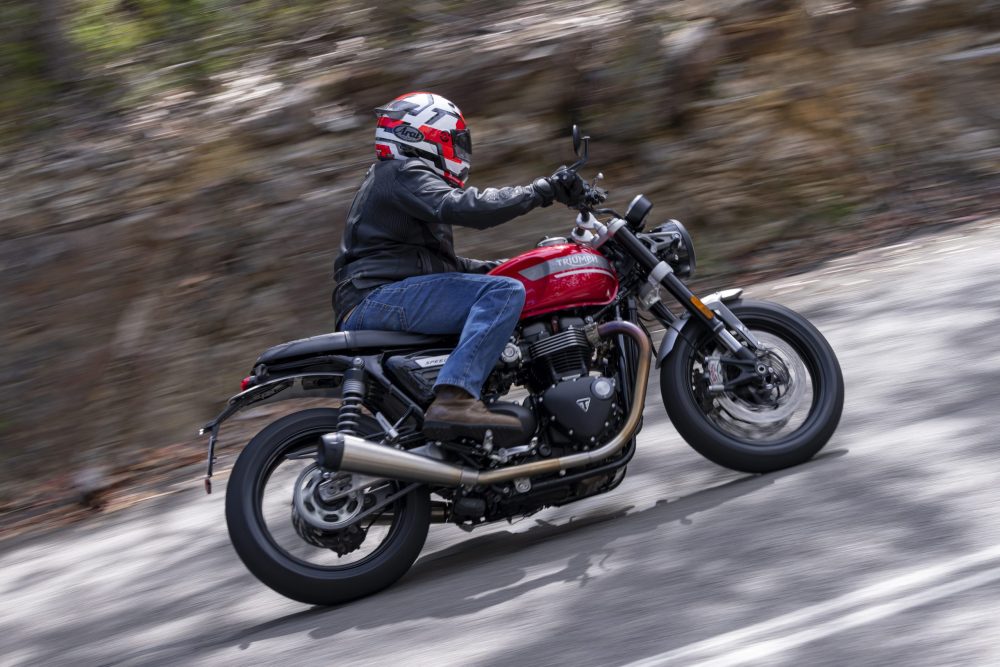 If you want to get stuck into your favourite set of twisties the Speed Twin is an excellent companion, with plenty of ground clearance and a wide ’bar makes it easy to throw around from corner to corner. The front-end inspires loads of confidence, and you can brake late into downhill, off-camber corners and you just know that Metzeler Racetec RR hoop is going to stick. There’s no adjustment on the Marzocchi USD fork but it works well in a variety of conditions, with controlled nose-dive when braking hard and impressive compliance over bumps. 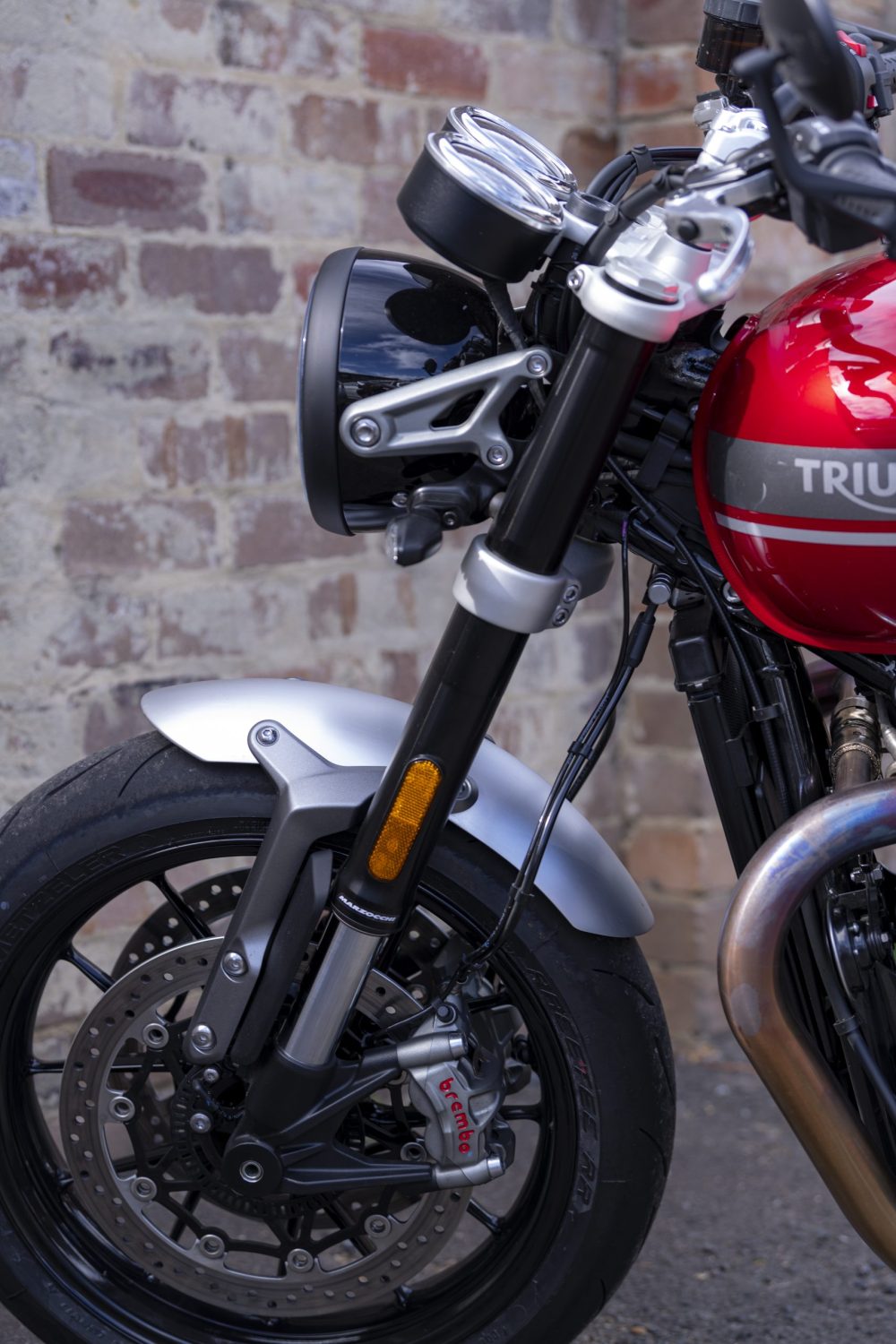 The twin-shock rear-end has preload adjustment only and while it doesn’t quite match the fork for compliance, there’s plenty of travel and it never feels too unsettled, even when riding over rough surfaces. The modest 160-section rear tyre no doubt aids the Speed Twin’s cornering prowess and, like the front, there’s loads of dry-road grip available. The only time I broke traction at the rear was when riding up a damp mountain road that had a section covered in oil and sawdust, and the traction control kicked in quickly and without fuss. 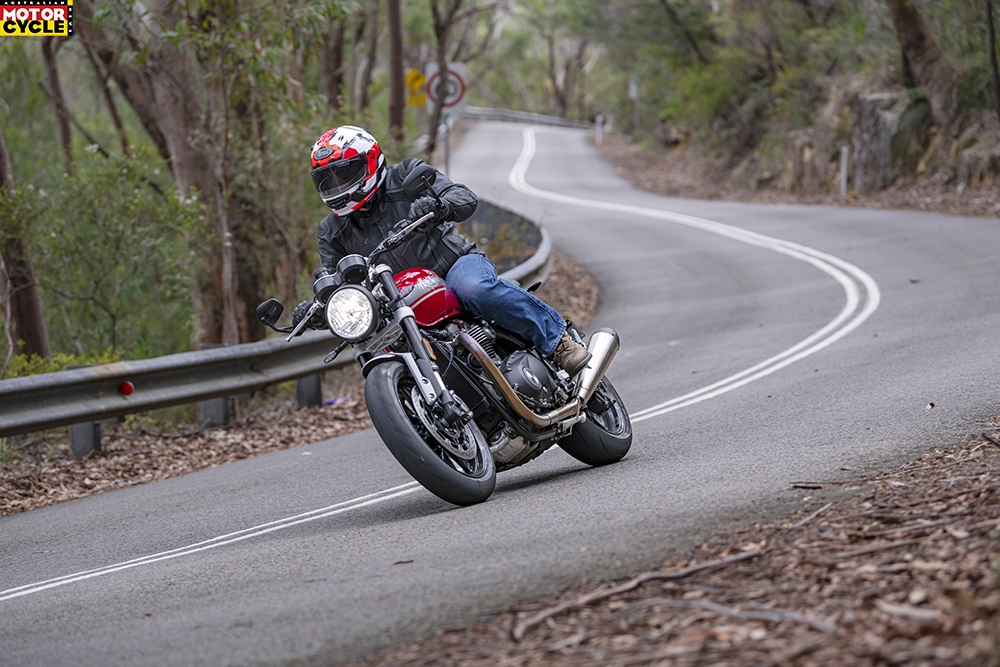 The braking system on the Speed Twin is phenomenal. A Brembo radial master cylinder, 320mm discs and four-piston M50 monoblock calipers up front provide more than enough stopping power, and the feel at the lever is fantastic. Nissin looks after the rear-end with a two-piston floating caliper clamping on a 220mm disc. And while there’s no cornering ABS, the system works well; it’s not too intrusive but it’s there when you need it. 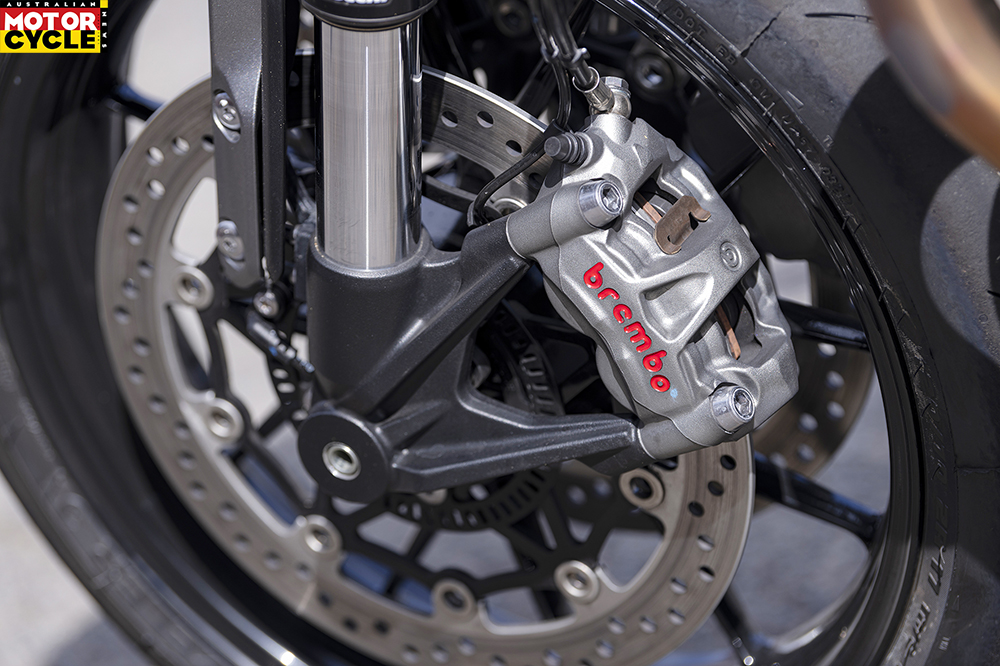 If you want to poke along and enjoy the scenery, then the Speed Twin is up for that job as well. Throw a leg over and you’ll be immediately pleased with the casual riding position, which is much more relaxed than the sportier Thruxton. The Speed Twin’s 809mm-high seat doesn’t look like it offers much in the way of cushioning, but it’s nicely shaped – narrow near the tank so it’s easy for shorties to get their feet down and wider where it needs to be for all-day riding comfort – and supportive. Seat width tapers off towards the back, but pillions are afforded decent grab handles and there’s even a seat strap. 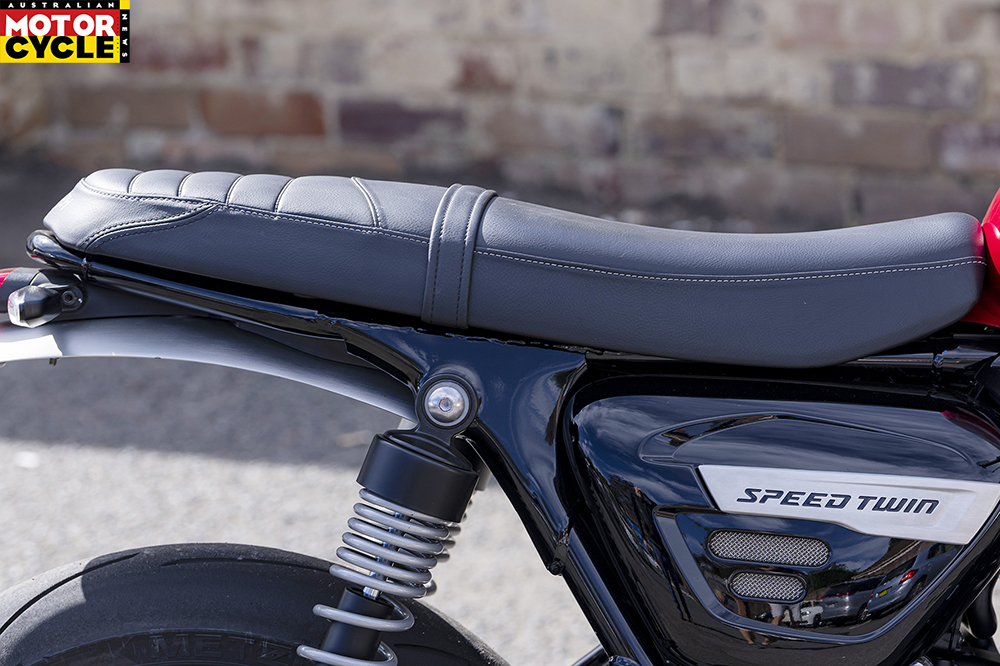 On test, the Speed Twin averaged 5.4L/100km, so you’ll get more than 250km out of a tank. Disappointingly, there’s no cruise control fitted, which seems a strange omission considering some other models in the Bonneville 1200 line-up come standard with cruise, including the T120, the Bobber and the Speedmaster. 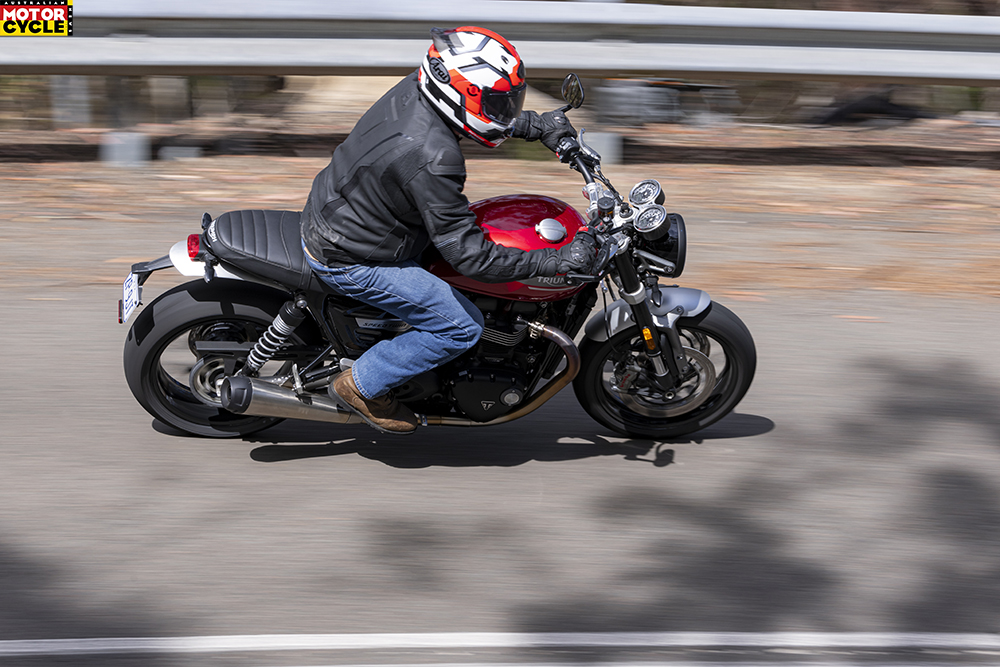 Switchgear on the Speed Twin is simple and uncluttered, with a mode button and an info button, for selecting the mode and scrolling through the LCD readouts respectively. The analogue gauges look great but the LCD readouts are small and difficult to read, so are not ideally suited to riders who might wear reading glasses, which I assume would make up a fair share of the target market for this bike. The bar-end mirrors offer a good view and are largely vibe-free, but they don’t do you any favours when lane-splitting. 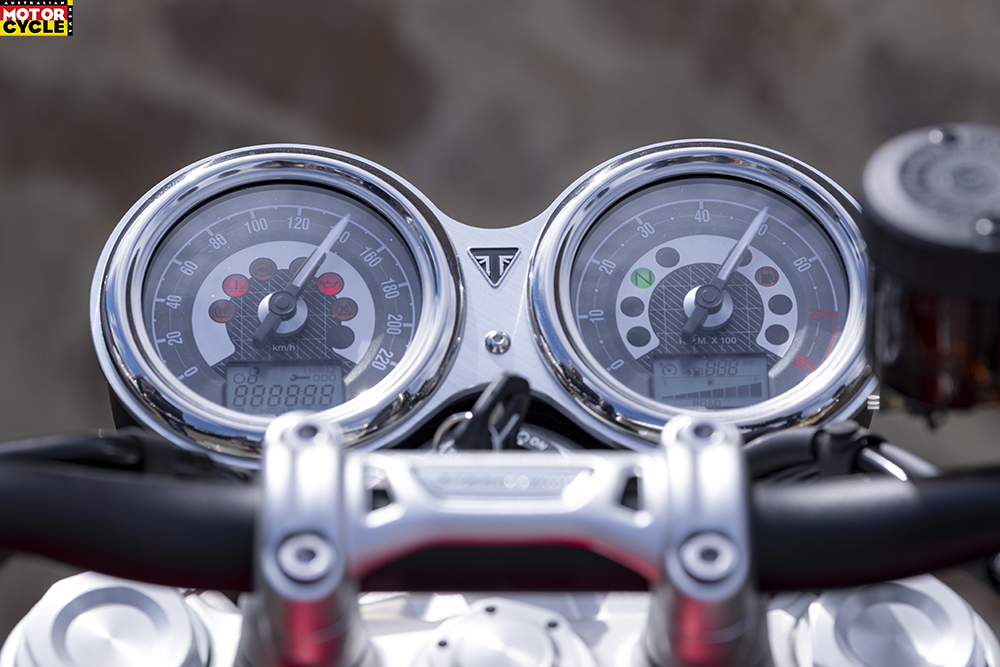 There’s a heap of options available through Triumph for the Speed Twin including heated grips, tyre-pressure monitoring system, protection equipment, tankbag, quilted seats, as well as a selection of machined, chrome and black trim bits; you can spend plenty of time, and money, configuring your Speed Twin on the Triumph website. 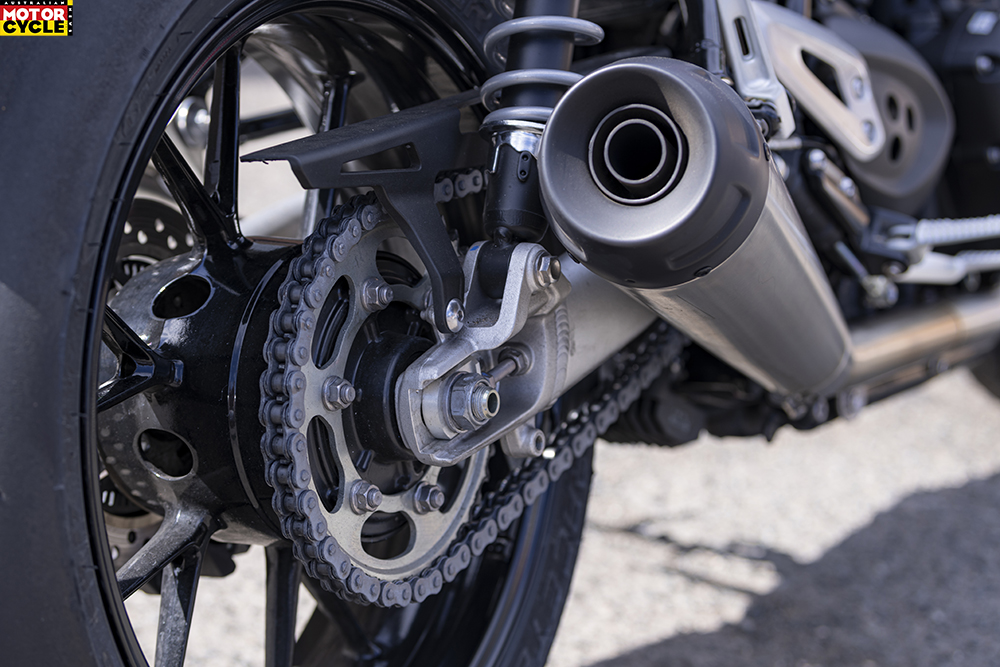 I reckon this bike nails the retro brief better than just about any other, and it’s certainly worthy of the Speed Twin name. It looks great, it’s fun to ride, it’s comfortable and, if you want it to, it’ll harry sportsbikes on your favourite back roads. Now that’s a retro triumph. 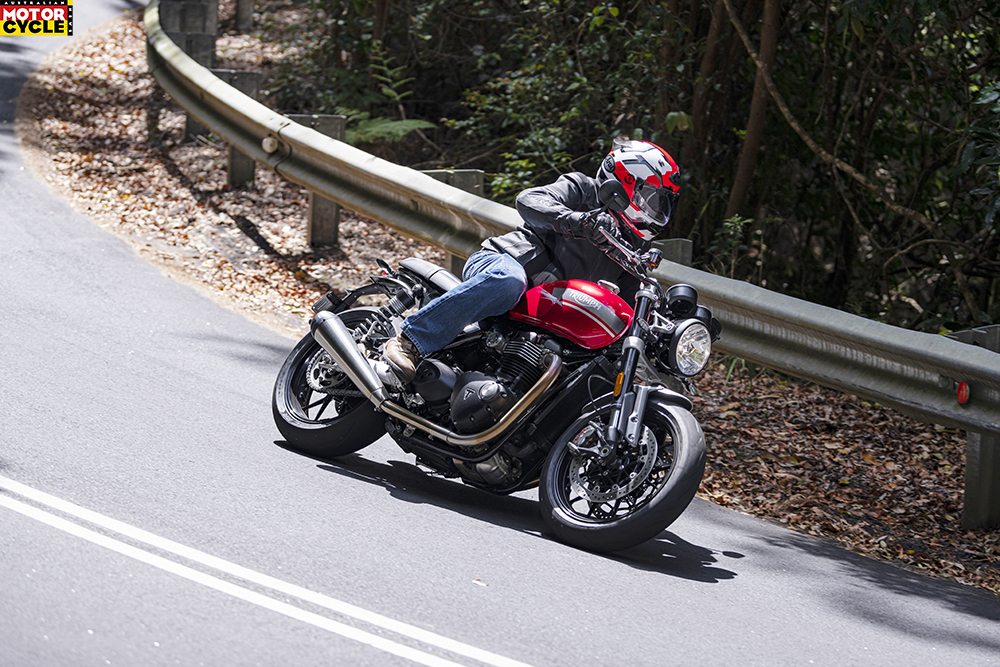 First released footage from the Cruden workshop of the new B306-HMD motorcycle simulator - available now! Since 2005, Cruden has been developing a motorcycle simulator for professional use, by manufacturers, race teams, universities, research institutions and road safety organisa

Orange adventurers on big bikes tackling challenging tracks and taking in epic landscapes - this is what Adventure riding is all about! Catch some highlights of what went down over five days of adventure riding nirvana - from Wisemans Ferry to Jenolan Caves, Dashville, Walcha an