I’m a huge fan of trials and hard enduro ace Tim Coleman. Very few riders are as gifted when it comes to the two disciplines and his skills on a bike really have to be seen to be believed. These days, as well as competing, Tim performs stunt shows and hosts a variety of riding clinics both here and overseas, covering off lightweight enduro bikes, large-capacity adventure bikes and trials bikes. 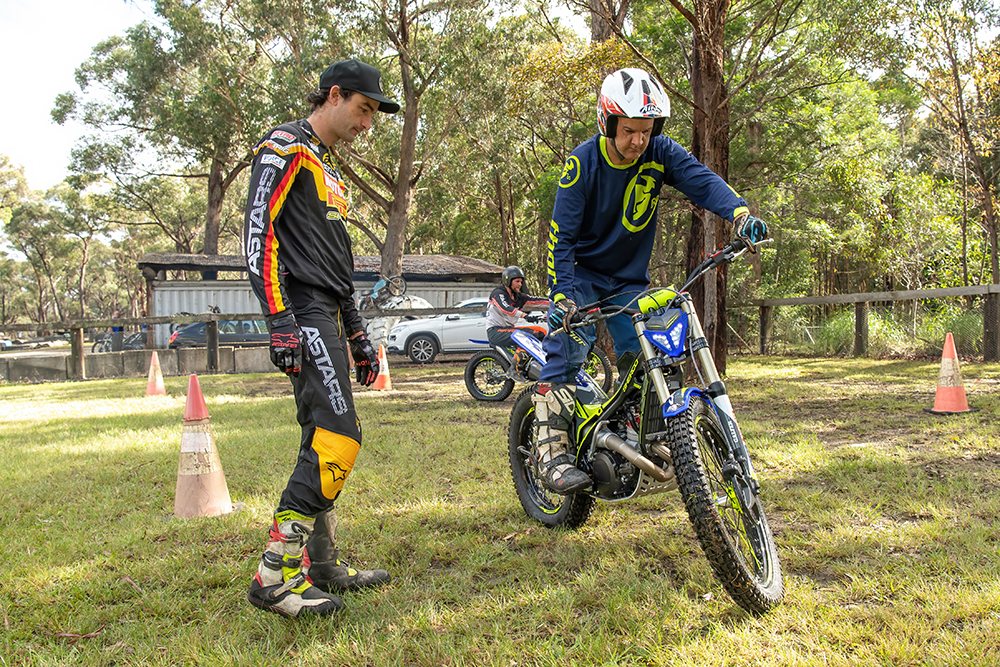 Sherco Australia used Tim’s Trials clinic as the stage to launch two models from its 2022 trials range, giving me the opportunity to not only sample the machinery but to also get a feel for the type of event Tim runs and if any of those insane skills of his can actually be passed on.

My bike for the day was Sherco’s new Trial 300 ST Factory. And while the day was originally supposed to take place at the brilliant Pacific Park trials facility, it’s been hit hard by the floods, so instead, it was held at David Wilson’s Bilpin Moto Park in the Blue Mountains. 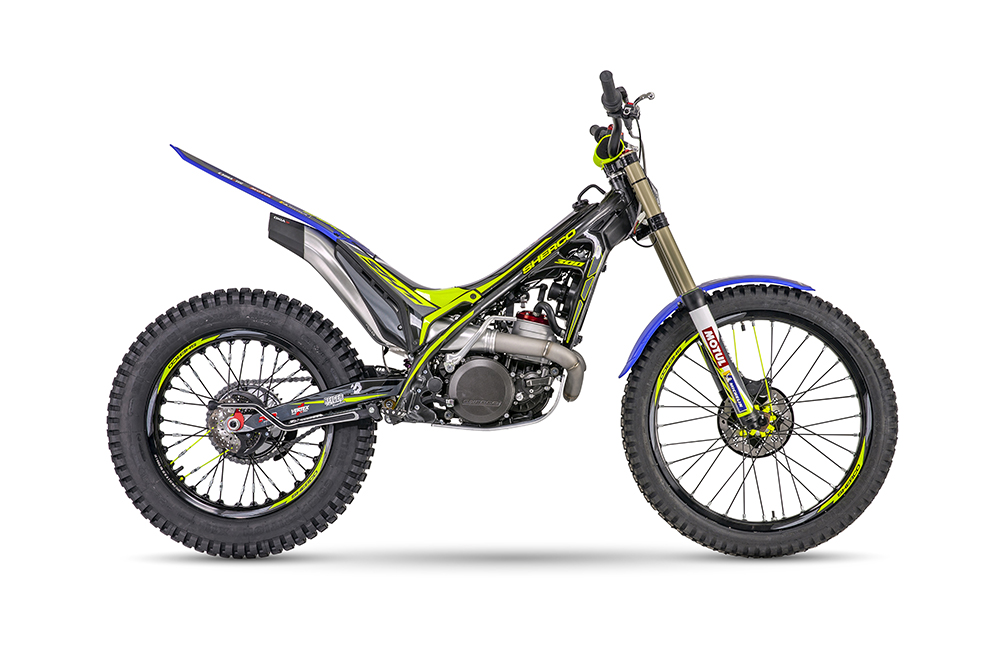 Despite looking and performing like no other genre of motorcycle, the skills required to operate a trials bike can be related to all other types of riding. The old saying of “to ride fast first you’ve got to ride slow” is a great way of way of describing what trials riding can do for your confidence on just about any type of bike, whether it’s doing a feet-up U-turn on a large, heavy touring bike or belting up a hard enduro hillclimb. It’s no secret that some of the world’s best hard enduro riders come from a trials background and the results speak for themselves.

Trials riding is not new to me; I’ve owned three over the years including two Shercos and more recently a 2018 Gas Gas GP 300. I have competed in a few club day events as a C-grader – primarily for fun – and while I’m capable of tackling stand-alone B-grade obstacles, I struggle to link a whole section together in that grade. 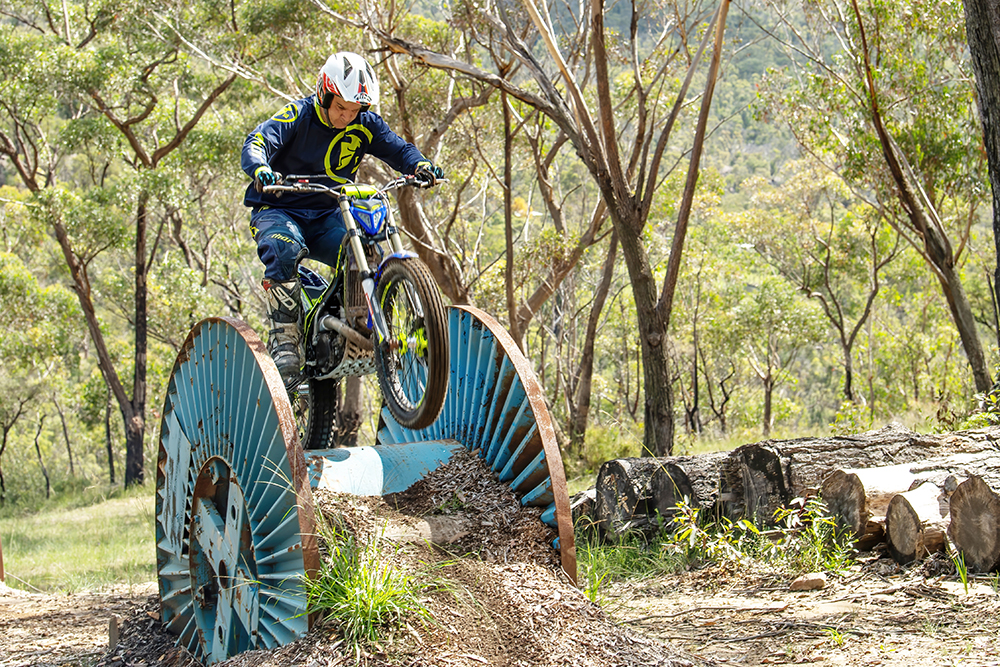 Tim and David gave us no guarantee that by the end of the day we would all be riding like Toni Bou (or Tim and David for that matter), but did say we would definitely benefit from some trials basics which can be applied to any form of our wonderful world of motorcycling, regardless of skill level or previous trials bike experience.

There were a few 250cc variants available, but I made a beeline for one of the four 300cc machines and followed Tim into a paddock with some small obstacles in it, before he began running us through what we would be doing. To kick things off, he covered the importance of clutch control – you can use one finger on these bikes all day long because they are so light – and next up we practised static balance. 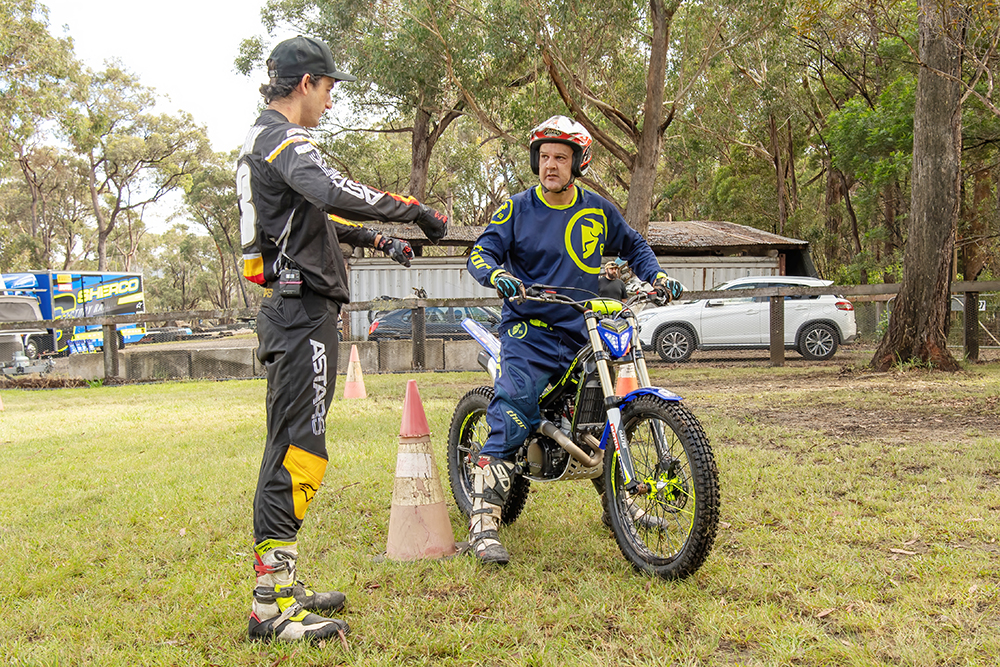 With the engine off, and after a bit of practice, I managed to keep my feet on the ’pegs for about four minutes; these machines are light and beautifully balanced. To be fair, it’s something I can do on most motorcycles, and on my mountain bike I can balance indefinitely. But I wasn’t going to get ahead of myself as I knew the day would become progressively more difficult.

Next up we ran through a series of exercises focusing on clutch and throttle control. For those of you who have watched trials, you probably think it looks pretty hard. But it’s not until you jump on one for the first time that you realise just how many thousands of hours it must take to get to the level of Tim Coleman’s calibre. 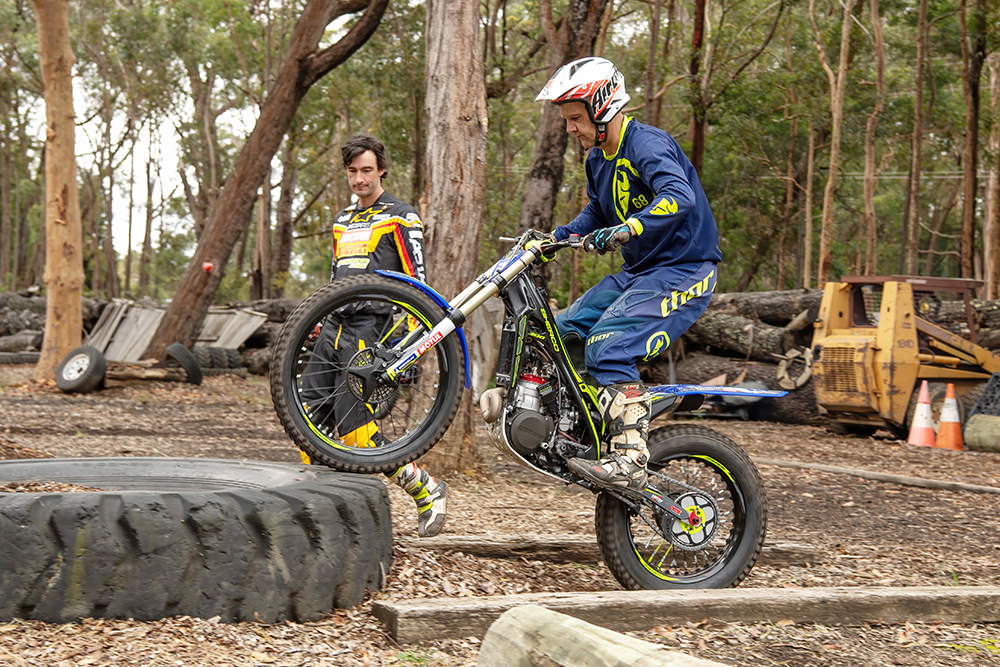 Trials is all about finesse and technique. The bikes have no seat, they weigh just shy of 70kg and pump out less than 20 horses. So the key to getting the most out of them is technique, clutch and throttle control, and body positioning. As the day moved along, we practised exercises such as full-lock turns, short wheelies and stoppies. Tim was normally the one to demonstrate how to perform each of these tasks (and he made us all look like gumbies by comparison). Having instructors as good as Tim and David makes such a difference, and while I went in there with an open mind, I was also a bit sceptical of how much I would actually learn. But by mid-morning I was riding better than I was four years ago when I sold my last trials bike. 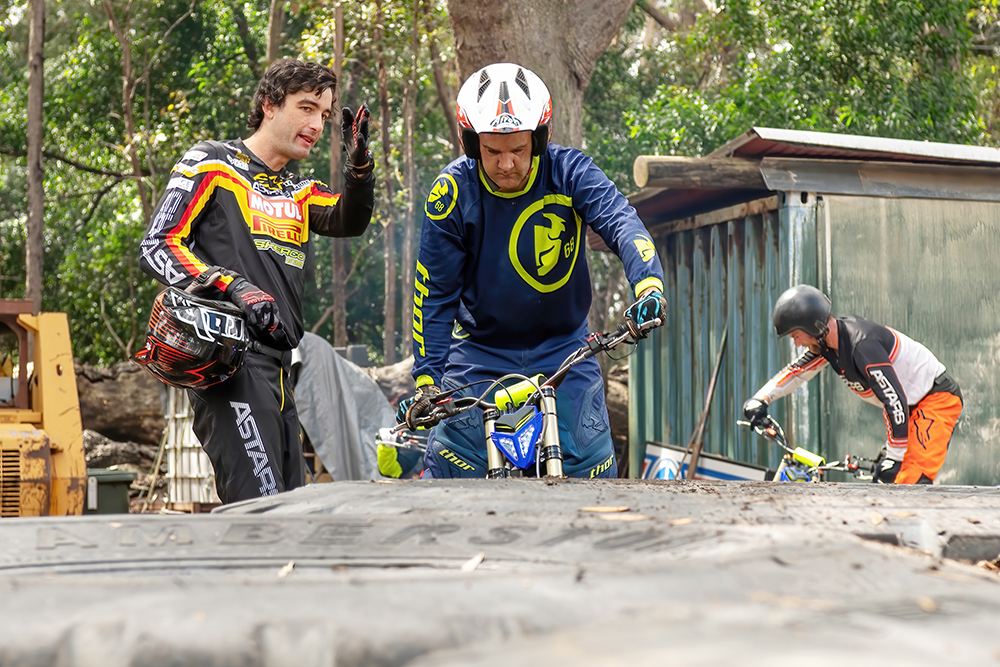 And I wasn’t alone. Talking to the other participants during the lunch break, it was clear everyone was impressed with the progress we had made in such a short time. The Sherco team was on hand to answer any questions and make any adjustments to our bikes and they were fuelled up ready to go for the afternoon session.

To many people driving past, David’s property would probably look a little strange, but to trials and enduro riders, it looks like heaven. There are dozens of man-made obstacles to suit various levels of skill and we were all itching to put the bikes and our newly learnt skills to the test. As per the morning, Tim or David demonstrated the correct technique and then it was up to us to replicate our finest impersonations. 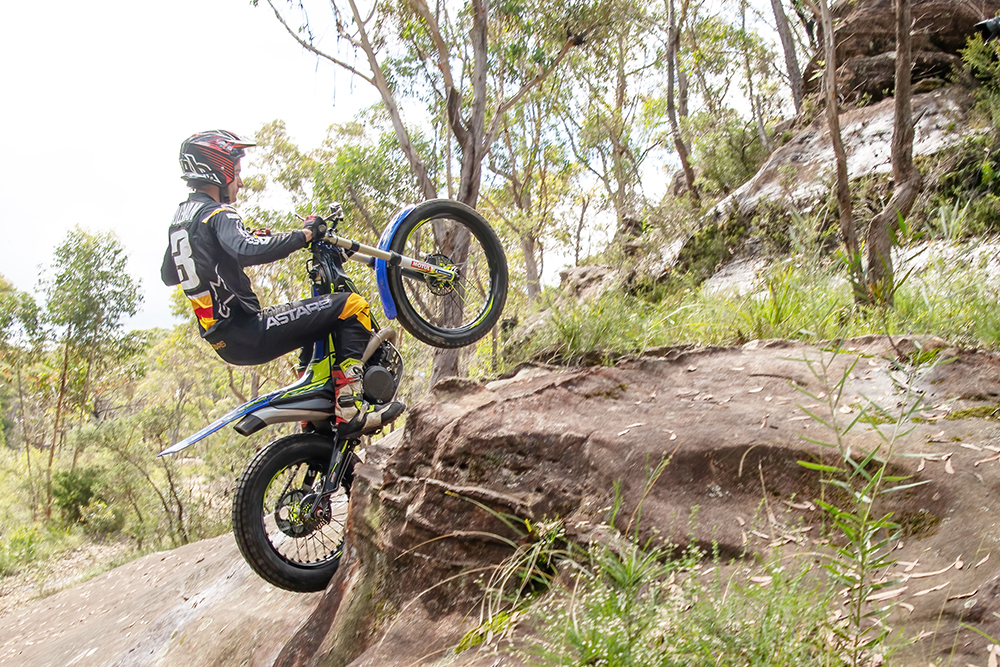 As the obstacles slowly got more difficult, we all gained more confidence under the watchful eyes of our two brilliant coaches. A couple of hours later, David took us all down the valley on his property to try some more natural-terrain-type trials scenarios and the mountainous setting was perfect. David also runs enduro and adventure bike training at his place, you can see he is passionate about what he does and it really is a very good venue.

Despite running courses there for years, David’s property hardly shows any signs of long-term bike damage unlike some other designated bike parks I’ve been to, and little things like erosion control measures were clearly in place in various creek crossings and gullies. These additions are certainly steps in the right direction for maintaining the future of the sport. 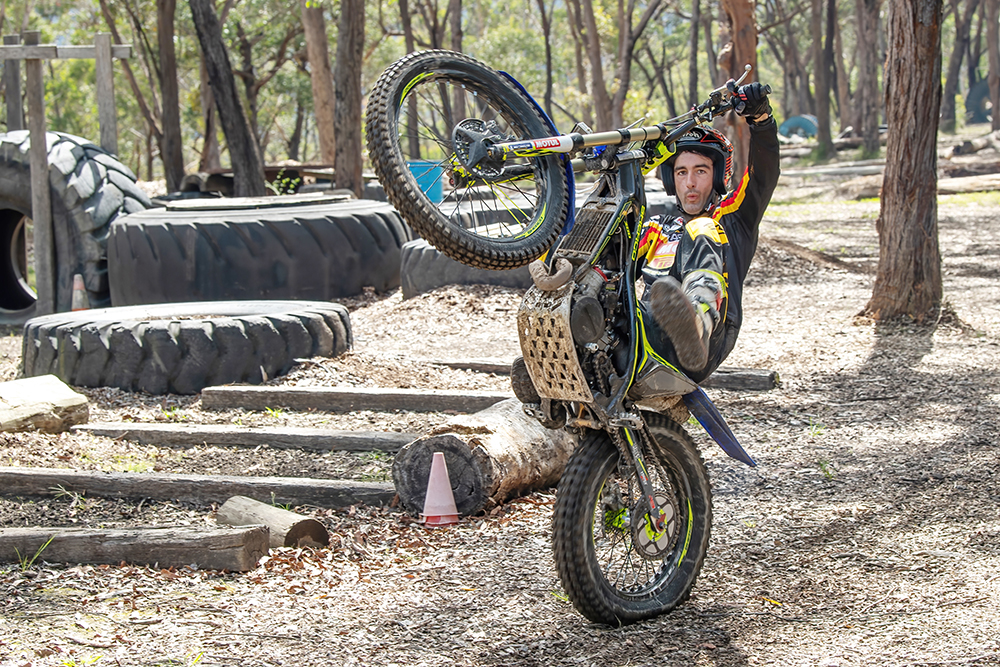 By the end of the day we all agreed that trials is invaluable for improving techniques applicable to any bike. Tim and David are brilliant instructors and Bilpin Moto Park is a fantastic venue.

The beauty of trials is you can go out and get dirty for comparatively very little money. Sherco’s Factory range starts at $10,490 – compared that to, say, Yamaha’s $14,949 WR250F and there’s some good incentive to go adventure trials riding. They do not chew through tyres or chains and sprockets like a 50hp dirtbike, piston and rings rarely need replacing and you can ride all day and only use about five litres of fuel. 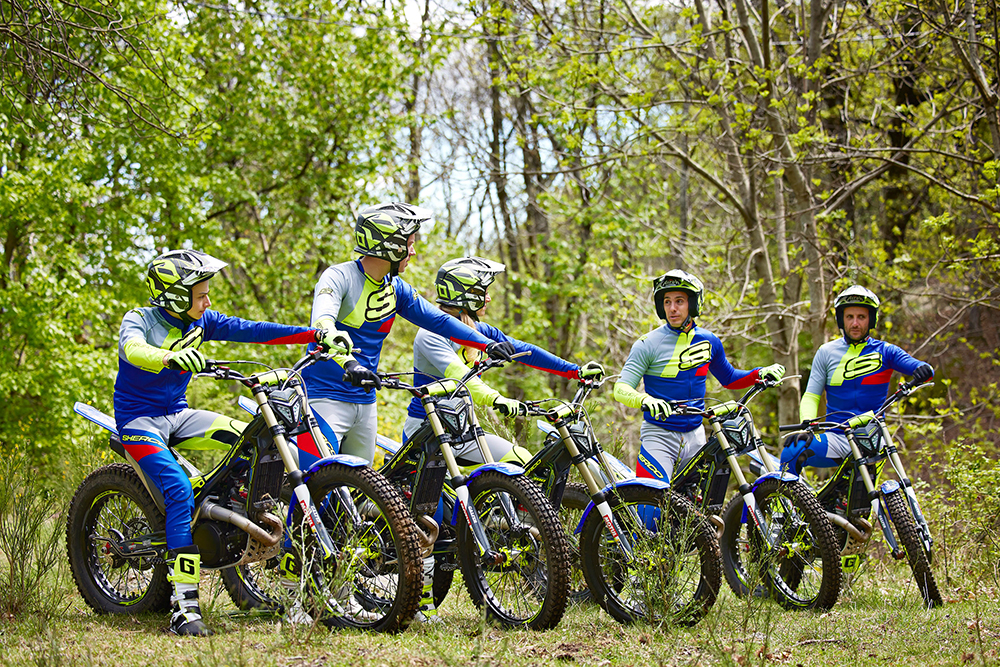 Another bonus is that trials bikes are super quiet. So unless your neighbours hate the smell of two stroke there is good chance they will hear less commotion out of you on your trials bike than they will when your kid runs out of mobile data. 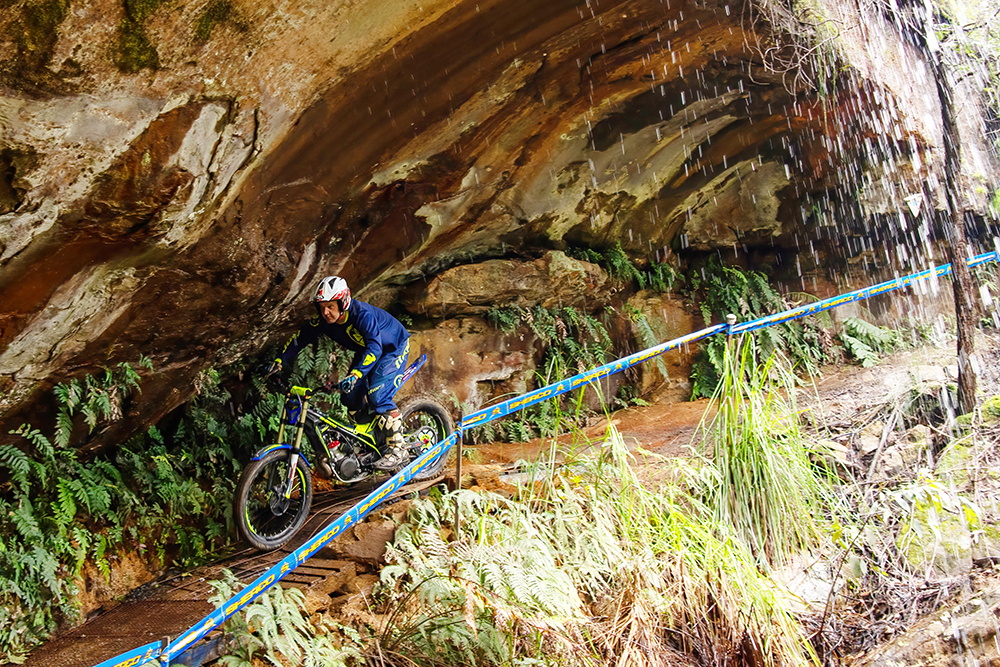