There’s been a lot of hype around Husqvarna’s Norden 901, the marque's first attempt at a road-based adventure bike – and for good reason. This is Swedish modular engineering at its best

This is a hugely significant bike for Husqvarna as it enters the highly competitive adventure market for the first time with the all-new 2022 Norden 901. Under joint ownership with KTM, it will come as no surprise that the Norden shares many similarities with KTM’s highly acclaimed 890 Adventure, which is a fantastic base to start from. Husqvarna has positioned the Norden 901 between KTM’s base 890 Adventure and its up-spec off-road biased 890 Adventure R. Is the Norden the best of both worlds or has it missed the mark?

Husqvarna was clearly confident of its new Norden 901, giving us two long days of testing around the Azores islands, which means we encountered almost every type of road and weather thinkable.

The 890 parallel-twin is taken directly from KTM’s 890 Adventure, and Husqvarna doesn’t try to hide this fact. And why should it? It’s an excellent platform to build from. Power and torque are identical to the KTM’s 77kW (105hp) at 8000rpm and 100Nm at 6500rpm capabilities. 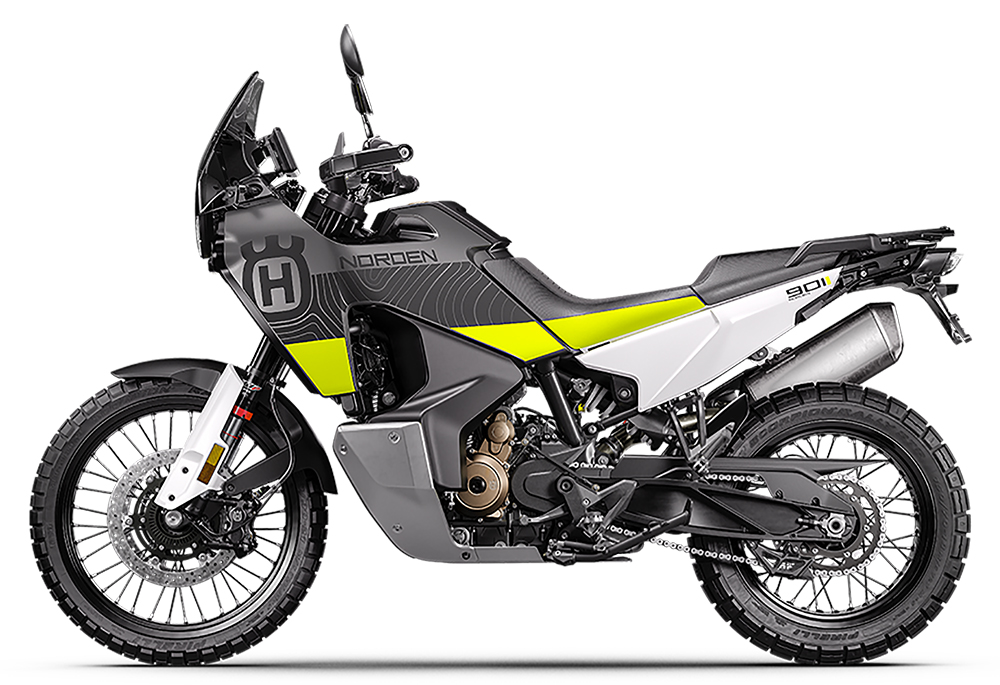 The two-way quickshifter comes as standard, and wearing relatively lightweight touring boots I never had a problem with changes, just infrequently finding neutral by mistake while riding off-road. However, there were a few complaints by some riders in heavy looking off-road boots. The shift on the road is effortless and smooth, backed by that pleasing ‘woof’ from the optional Akrapovic exhaust.

Controlling the power are multiple riding modes: Street, Rain, Off-Road and the optional (for $290) Explorer mode, which was fitted to our test bike. Each mode is preset, and changes the throttle response, the level of traction control intervention and the amount of power on hand. The specialist Off-Road mode delivers full power but turns off the lean-angle sensitive rider aids (ABS and traction control), allowing some wheel slip and effortless wheelies, while significantly changing the bike’s behaviour at the same time. 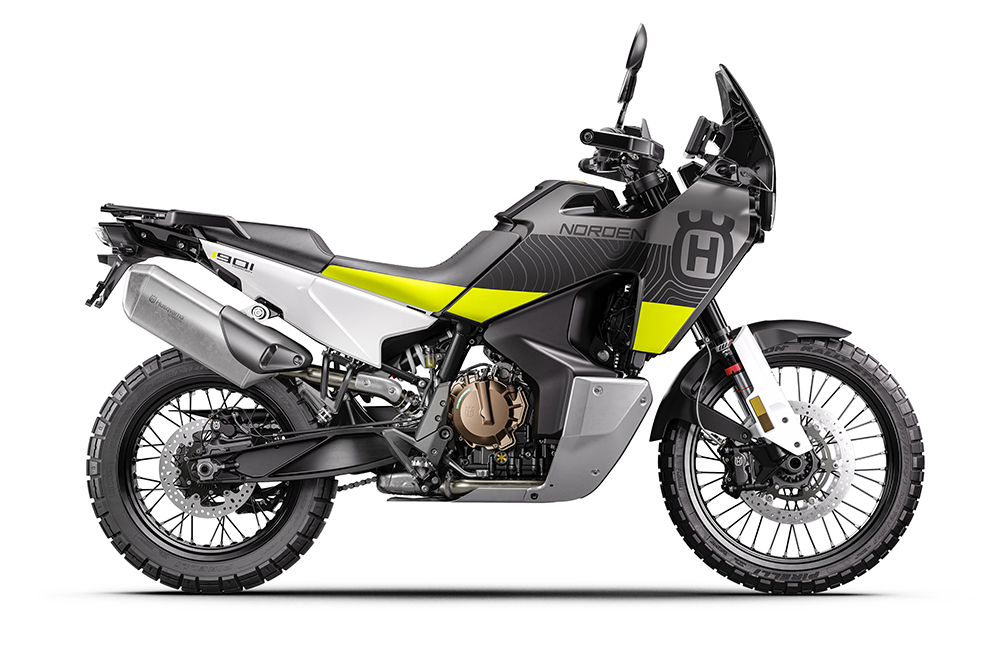 The optional Explorer mode allows you to personalise the settings, adding or reducing rear wheel spin or turning off the rear ABS, which is done automatically in the Off-Road mode.

Street mode, as you’d expect, delivers a perfectly well-behaved motorcycle. Power is smooth, with lovely drive from low down, and you can feel the rider aids controlling your first- and second-gear wheelie attempts. For most riders this is all you really need. However, we encountered some tough road sections featuring wet cobbles covered in moss but, with a closed throttle and via the KTM switchgear on the left ’bar, I could quickly shift into Rain mode (which is clearly highlighted by the colour TFT dash). 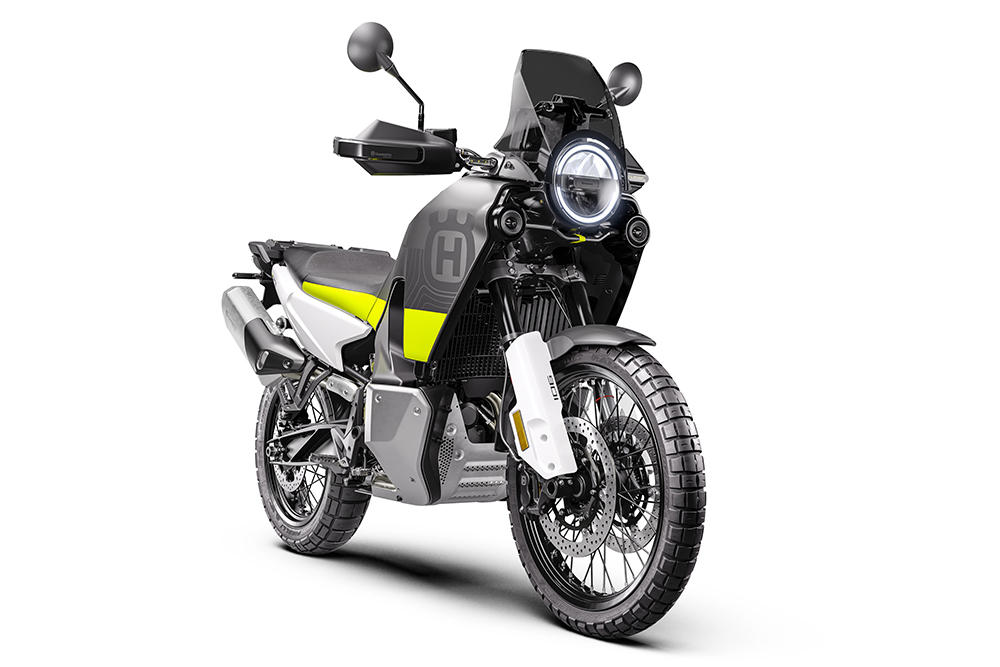 Throttle response is considerably softer in the Rain mode, with power capped at 61kW (82hp), and I was thankful of the increased intervention of rider aids in such slippery conditions, too. In normal riding I rarely touch wet-weather modes, but on wet cobbles I was grateful for the option. Both traction control (TC) and ABS are lean sensitive, and a reassuring light is illuminated when the TC is activated, which was almost continuously in the treacherous conditions. However, despite the heavy intervention, there isn’t any backfiring or jolting, just smooth, uninterrupted drive. 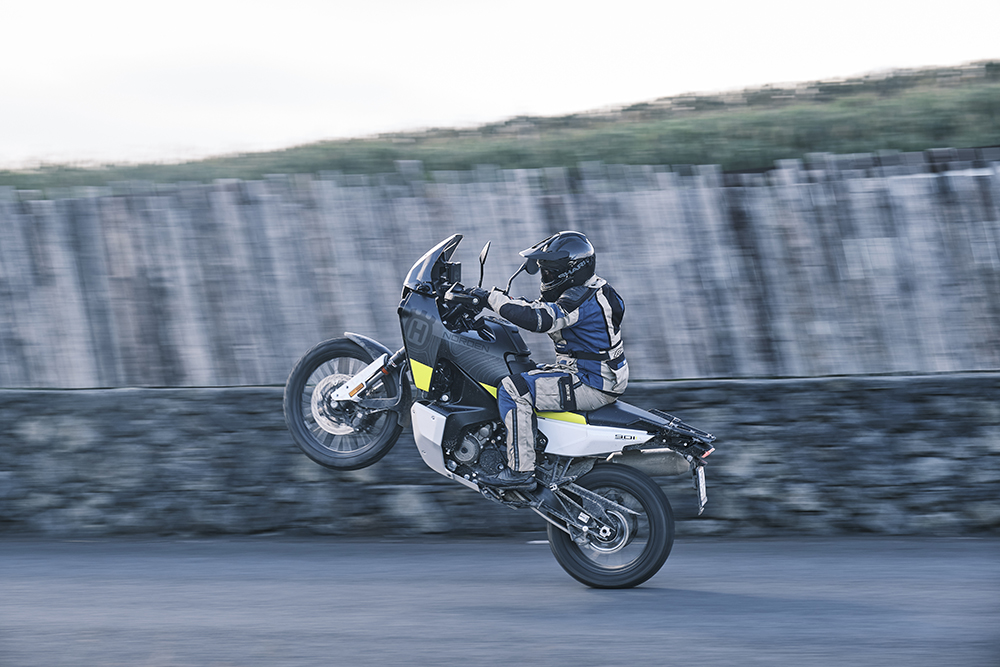 The optional Explorer mode allows you to trim the electronics to match the conditions and the way you ride. For example, I reduced the TC, which allowed effortless and useful off-road wheelies. And I could have opted to reduce or turn off the cornering ABS. In the Explorer mode you can also change the power output and throttle response. 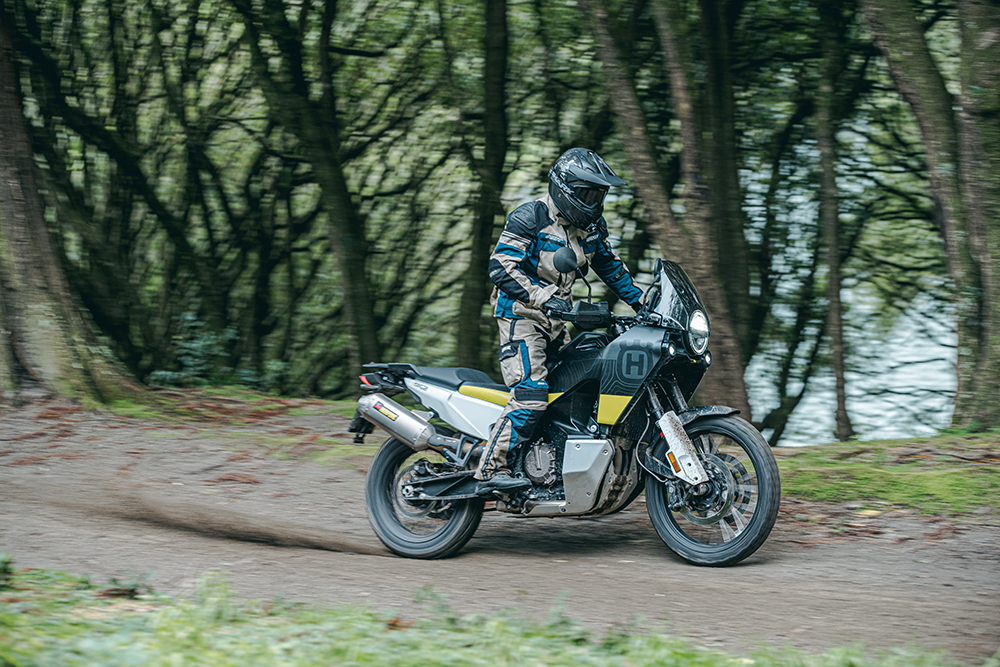 In the standard Off-road mode, the power delivery is easy to live with and the throttle isn’t sharp, while its progressive torque output allows the rear Pirelli Scorpion Rally STR tyre to find traction. You can tickle the throttle around tight turns without any snatchiness or, just as easily, spin the rear to tighten your exit (or roost your close-following mates with mud!). Peak power isn’t limited as it is in Rain mode. 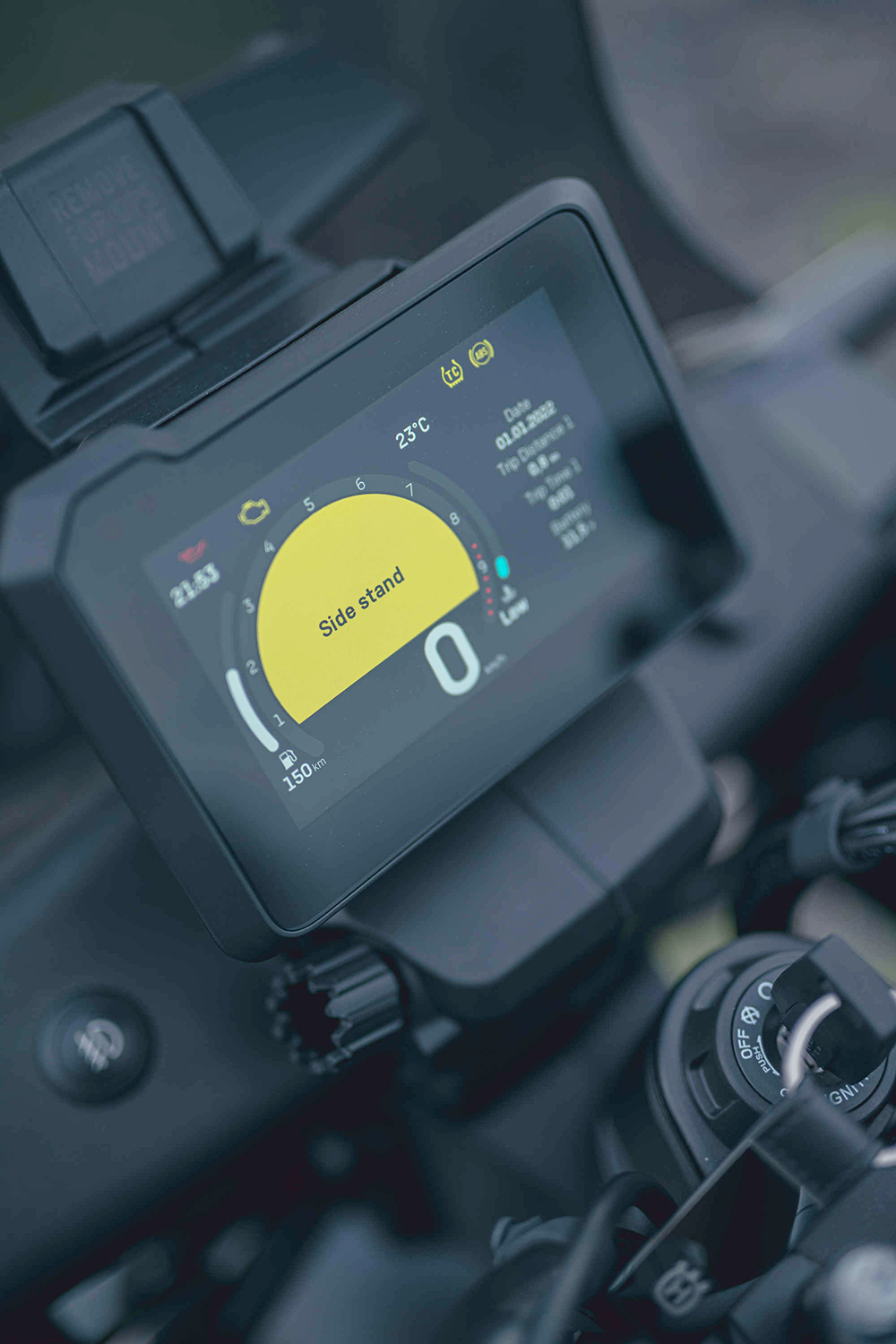 As you’d expect from Husqvarna which, like WP, is owned by KTM, the fully adjustable WP suspension is inspiring – and lower than the R version. Crucially, you don’t have that on-tiptoes feeling as you do on the KTM 890 Adventure R, which, off-road especially, gives the impression it’s on stilts. The 901 is much closer to the base-model KTM 890 in this respect. 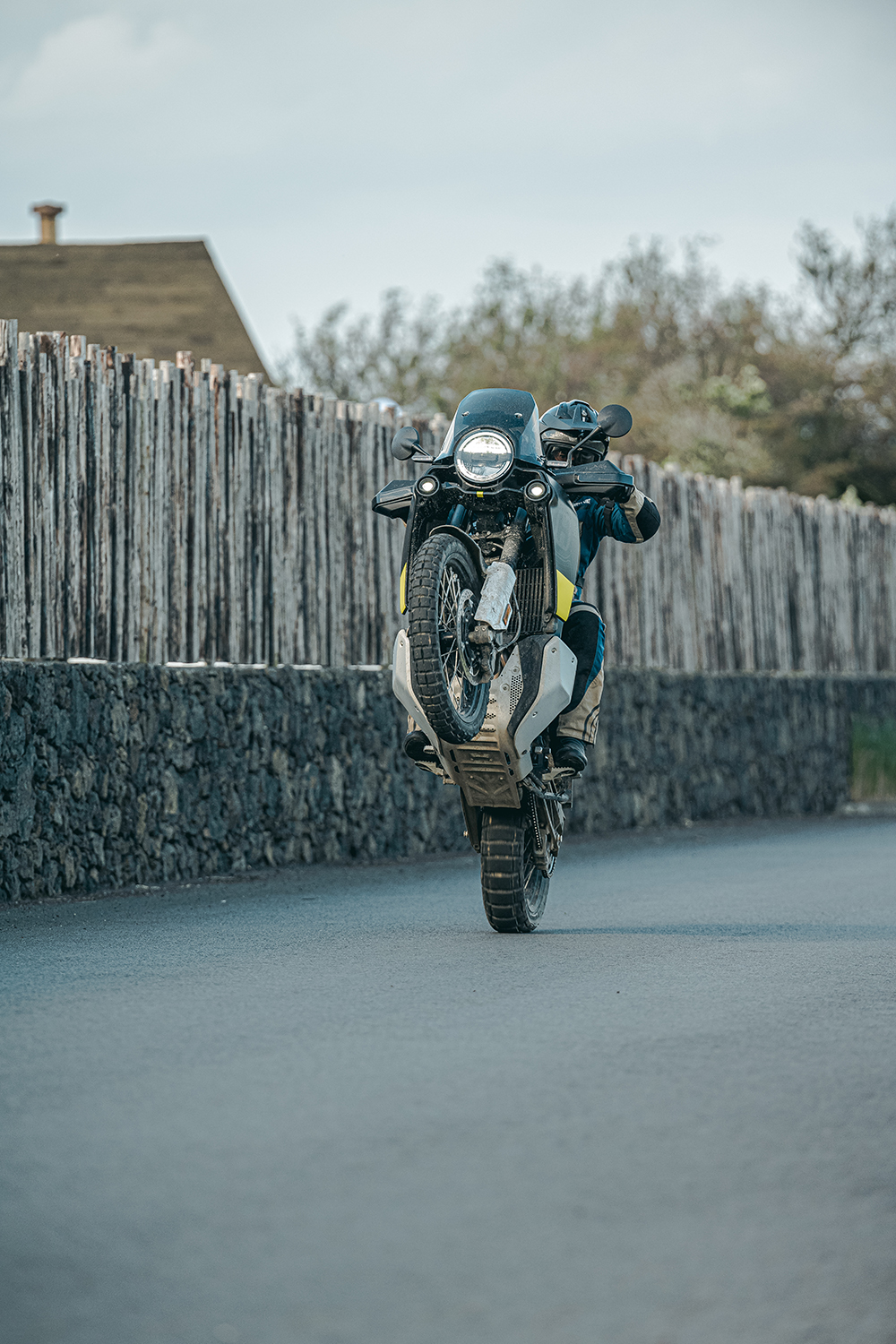 The test threw every type of road imaginable at the 901, but from smooth, 190km/h sweepers to pothole-riddled lanes and some challenging off-road terrain, at no point did I want the suspension changed or altered.

During fast, flowing cornering the Norden was incredibly stable for a bike with long-travel suspension. Aerodynamic bodywork has been designed to enhance stability while the off-road-looking Pirelli rubber was always reassuring on tarmac. At times I had to remind myself I was on an adventure bike capable of taking on the rough terrain, and while the 901 is clearly no sportsbike – there is lots of travel under heavy braking and acceleration – but its suspension movement is always controlled. That is the key. It almost feels like a big, fun Supermoto. 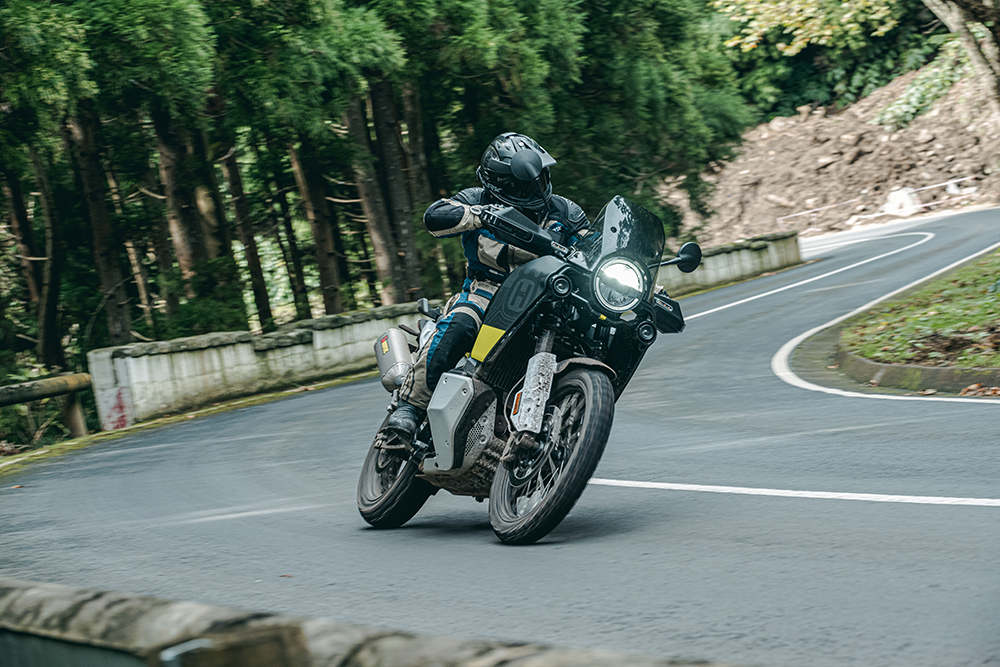 The Norden is eight kilos heavier than the KTM 890 adventure but such is its comparative narrowness and compact feel (the fuel tank, for example, is slightly smaller) that extra weight isn’t noticeable, and only a back-to-back test with the KTM would reveal if there’s any tangible difference. I certainly didn’t finish the Norden ride thinking it was heavier than the KTM, even off-road. 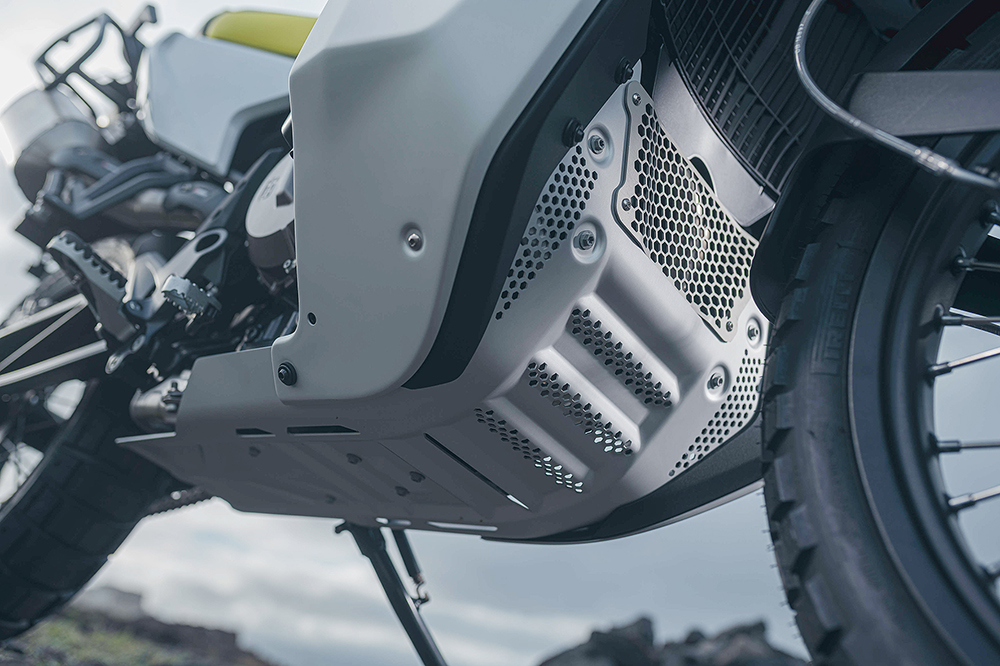 Off-road handling is eye opening. In extreme situations the Norden 901 lacks the sophistication and suspension travel of the KTM 890 Adventure R – but for this 45-year-old dad who’s never ridden the Dakar and who simply enjoys weekend riding off-road, there’s little to fault. There were a few moments, due to me picking the wrong line, when the fork and shock bottomed out. And I’m sure if you ride hard, with big air, you’d want to tailor the fully adjustable suspension or even fit beefier suspension to suit. But for me and 90 percent of the buying public, the standard suspension on these tyres was forgiving and reassuring. It all depends on your level of honest skill and where you ride. 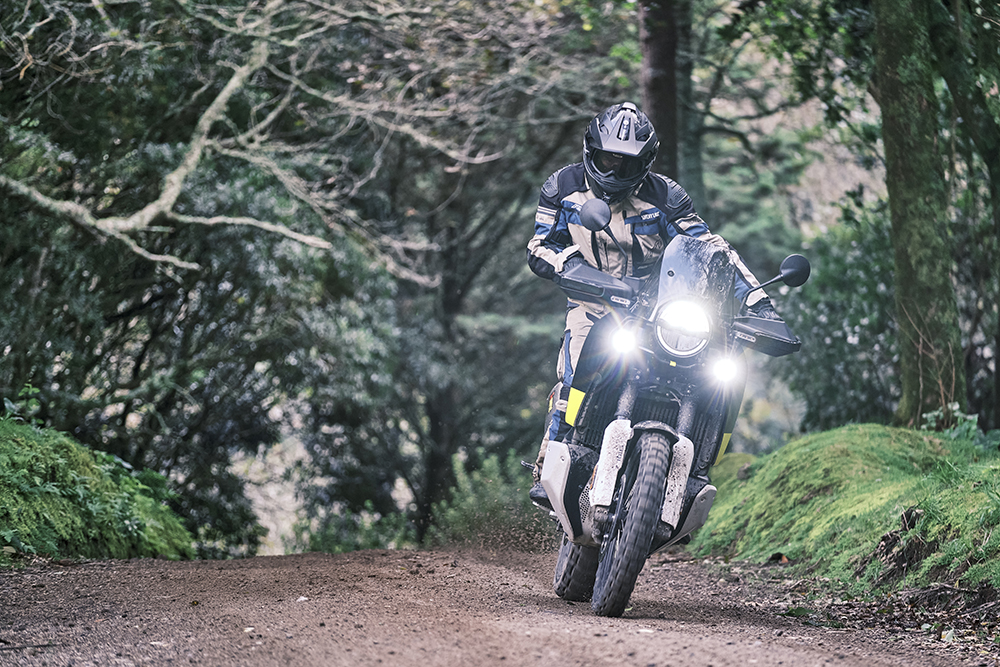 I could feel what was happening; the ’bar wasn’t jolting. Loose hands allowed the front to find its own route, and the rear did its best to manage the grip. The 901 compliments the rider, boosting the confidence of less experienced hands especially. 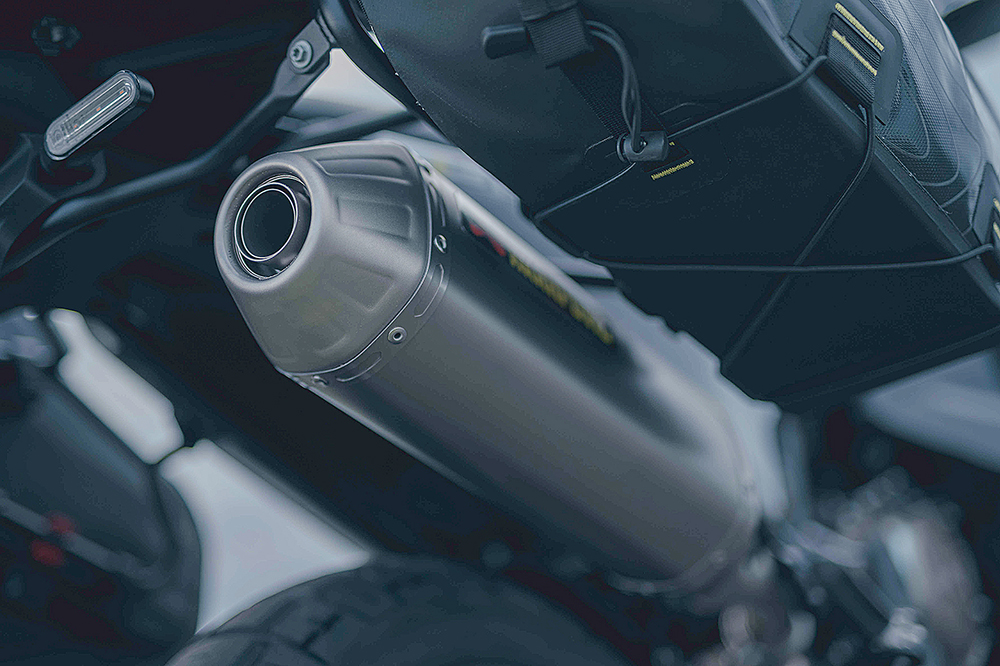 Braking performance is my only real criticism of the Norden 901 and, looking at my old notes, I wrote the same about the KTM 890 Adventure. The brakes are more than adequate for off-road riding at my level, but on the road lack the sharpness you normally associate with KTM’s sporting Brembo siblings. They lacked both feel and bite and at times I had to use four fingers rather than my preferred two. 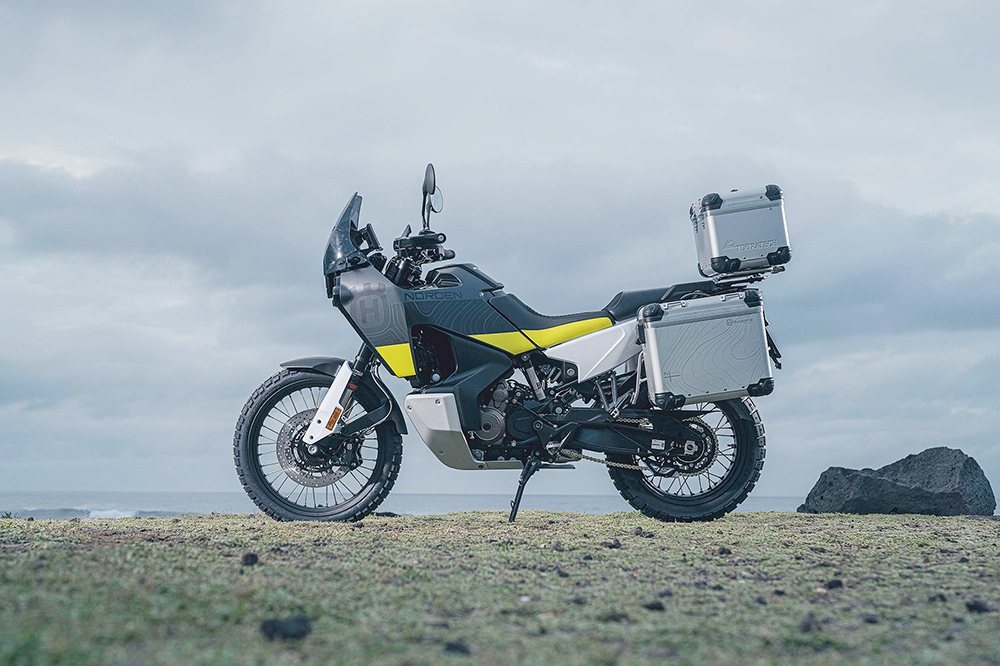 Again, a degree of this may be down to personal preference and exaggerated by the long-travel suspension, but once or twice, braking heavily downhill into a slow dry corner I wanted more bite and urgency. More engine braking would have helped, too. 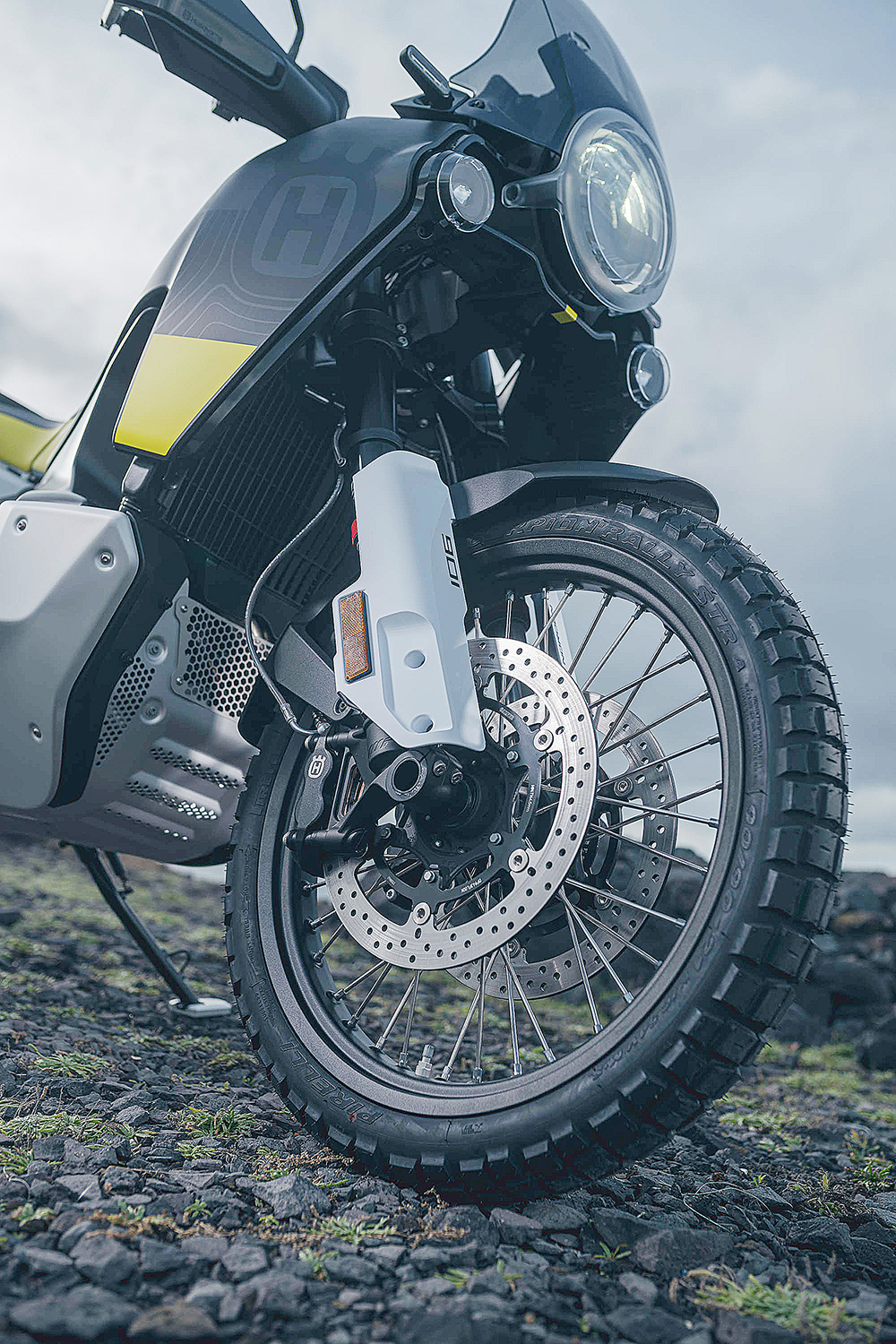 I would have liked to have had the ability to change the engine braking, which for me was lacking and is the same in every mode. The Norden would sometimes rush into corners, almost two-stroke like, with very little engine braking. More would help during steep descents and take the pressure off the front tyre. 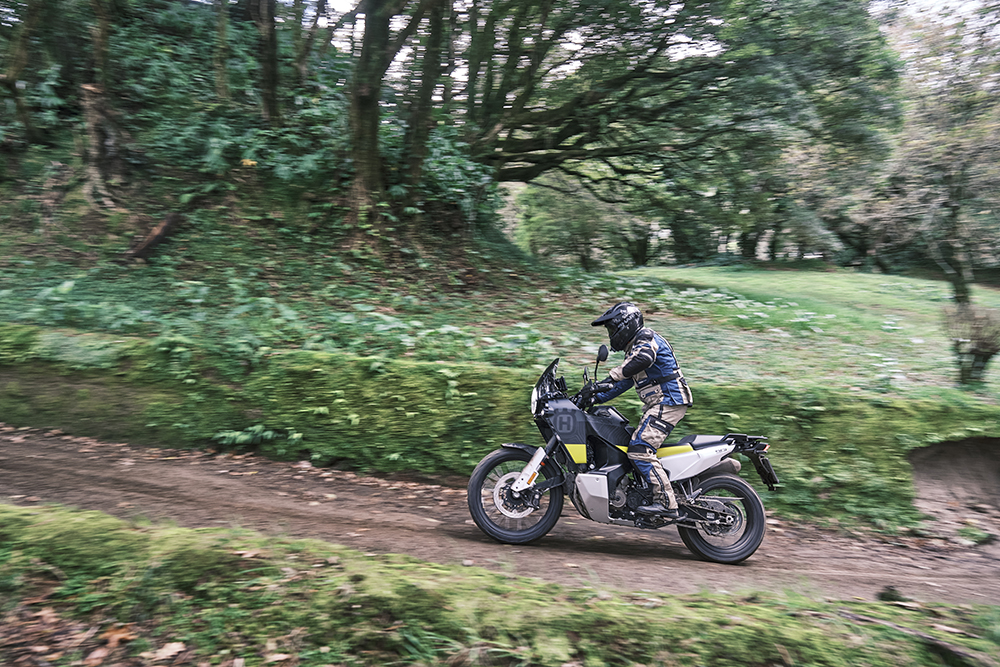 However, the Bosch lean-sensitive ABS is impressive, particularly in the Rain and Off-Road modes. As mentioned, some of the road conditions were very sketchy and I was grateful for the cornering ABS. Off-Road the ABS is deactivated from the rear (the front can’t be switched off), and ABS is no longer lean sensitive. I was a little worried at first, as it was hard to feel the ABS working – it’s that good, and a bit like bungee jumping without looking to first see if your legs are tied on. But the more you trust the off-road capability of the ABS the safer you feel; it’s incredible for an average rider how heavy you can brake off-road. 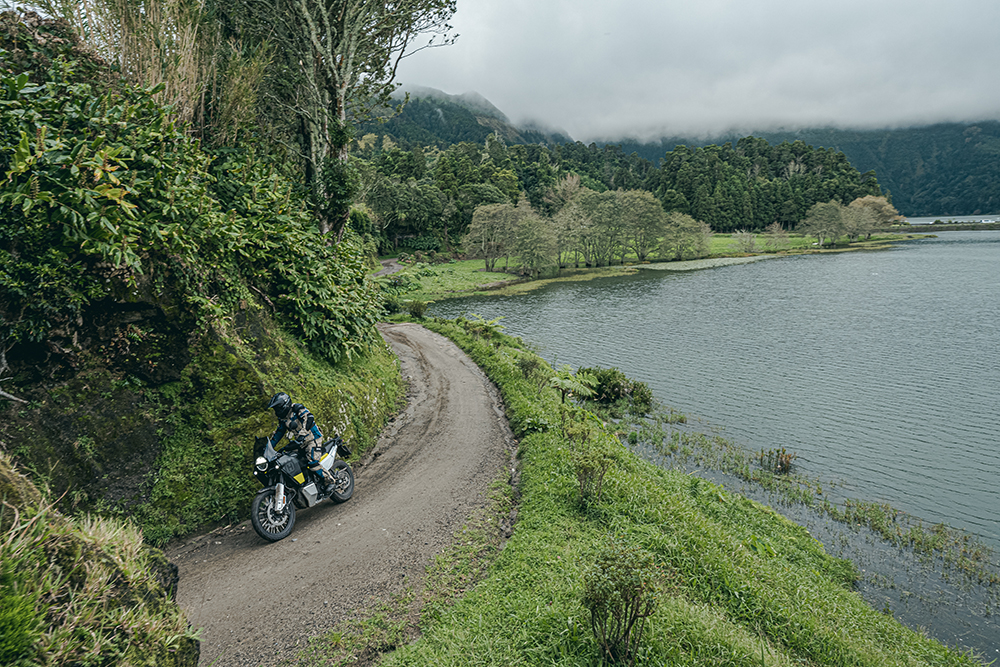 The modes and rider aids are accessible via the quadrant of buttons on the left ’bar, which interact with the new dash. I’ve ridden the KTM extensively in the past and I’m up to speed with the switchgear, and like the KTM, the new clocks are informative with clear colour graphics. They are relatively easy to navigate, although not initially intuitive. But by the end of day one it felt like second nature to quickly flick between Rain and Off-Road settings. However, the clocks change with the modes, which I found confusing: sometimes the gear position was clearly displayed, sometimes it was the TC… but I’m picking at detailed points only discovered after two intense days of riding. 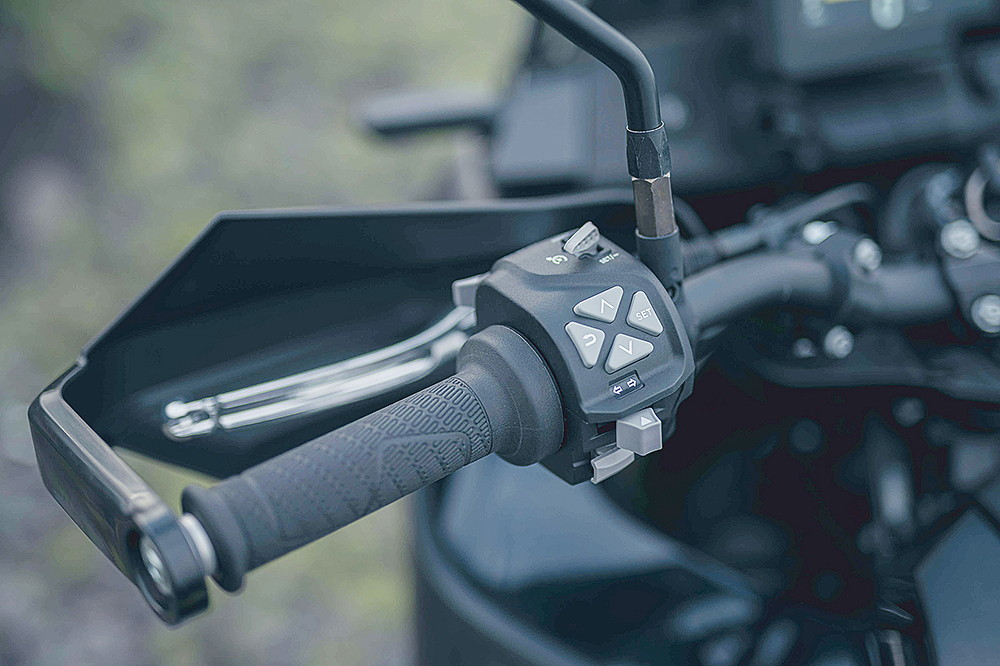 The Norden sits between the KTM 890 Adventure and the more off-road biased Adventure R model, and you could argue it’s the best of both worlds. Road handling, comfort, tech and rider aids are excellent, and equally, it can cut it off-road. If you’re serious about your off-road riding – making deep river crossings and riding wide open Toby Price style in fifth and sixth gears – then KTM’s R version would be a better option. But, for most, the Norden does it all. 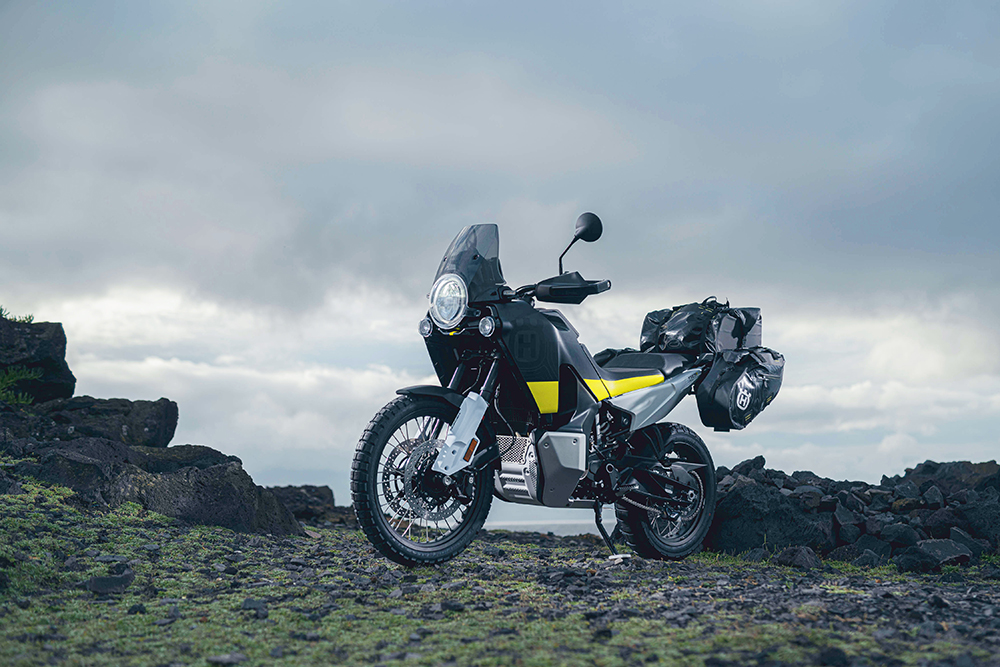 Okay, the brakes are adequate rather than stunning, and I’d want more engine braking, and there may be some who might want the ability to turn off the front ABS. But other faults aren’t really faults, just personal and minor niggles. If I was to repeat this test, I’d probably take the Husqvarna Norden 901 over either KTM 890 Adventure – it’s that good. 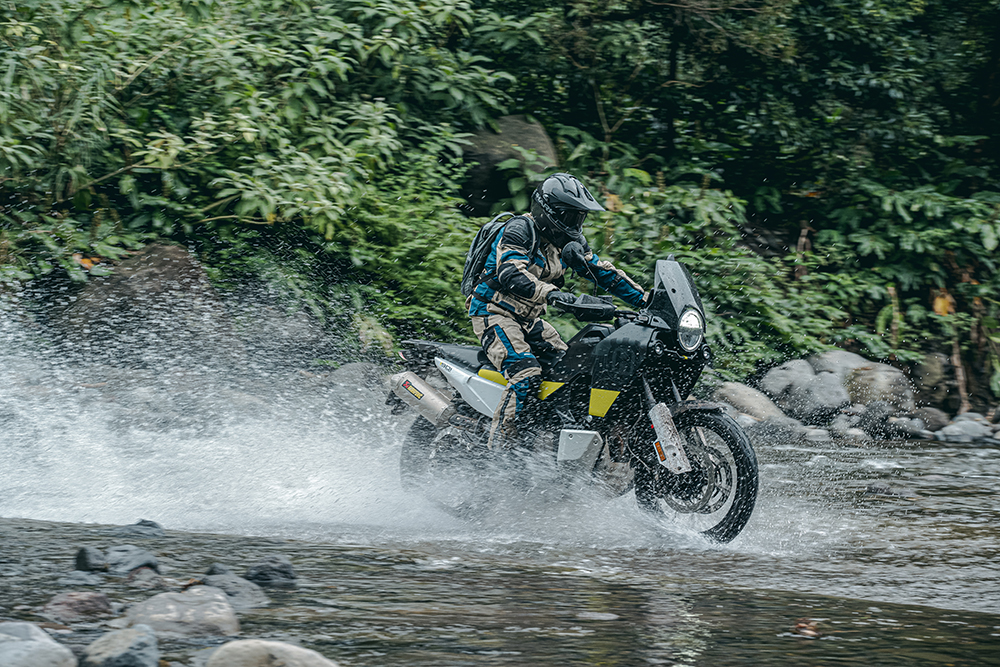