For the last two years, Wayne Maxwell and the Boost Mobile team have been virtually unstoppable, and from the outset of the 2022 ASBK Championship, Maxwell and his Ducati V4 R has been the class of the field, punching out times well clear of the field every session and setting a new qualifying record of 1min 31.363. But round one didn’t go quite to plan for Maxwell with a crash in race one handing the championship lead to Bryan Staring with a 1 – 2 finish at the opening round in Phillip Island 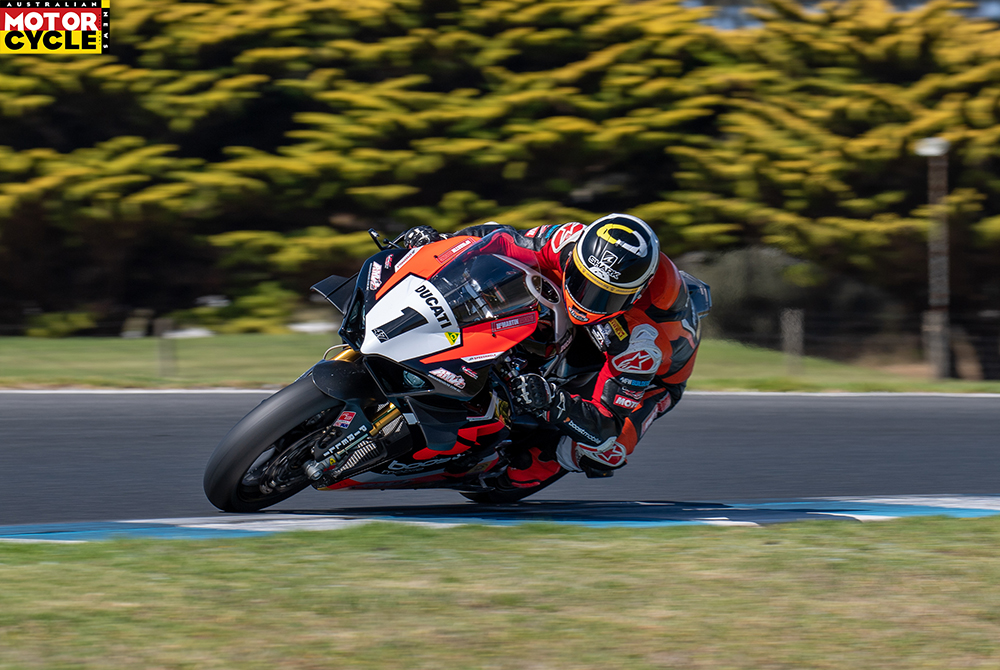 His challengers were still confident of an upset, Bryan Staring was quickly adapting to the Desmosport team and the Ducati V4 R, while Cru Halliday was looking motivated and comfortable after the Yamaha Factory Team’s switch back to Pirelli rubber. New teammate Mike Jones was settling well as was Josh Waters on the Maxima Racing Oils BMW. Through the field, other teams were adjusting to new riders and new components, but perhaps the biggest surprise was the disappointing form of Penrite Honda Racing’s Troy Herfoss. Herfoss had struggled in testing before, and many believed he could still pull out some magic on race weekend despite his worst ever ASBK qualifying position of sixteenth. 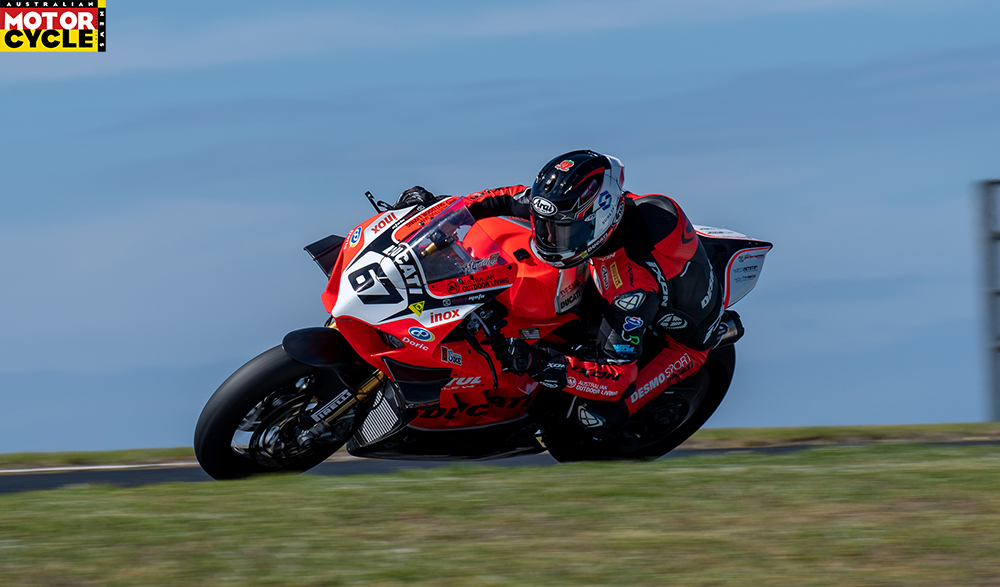 At lights out Maxwell blitzed the start while Halliday bogged down, dropping back to eighth. Staring advanced to second from the second row with Waters settling into third and Jones fourth. Arthur Sissis looked comfortable in fifth by lap three, but he was running a soft tyre for the morning race and would struggle to hold his position. 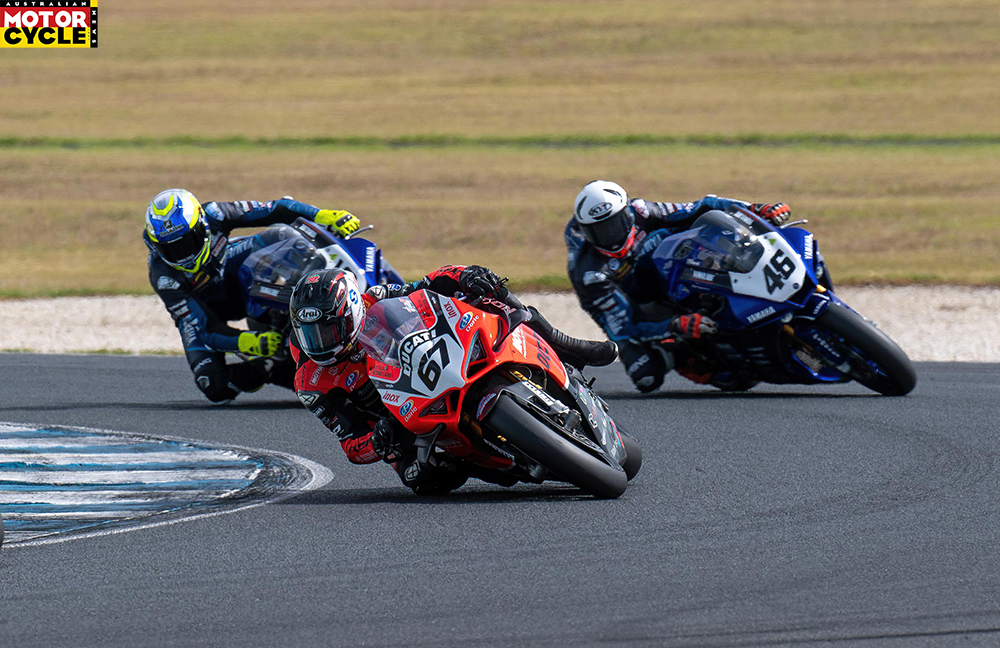 As Halliday was fighting his way through the field Maxwell suddenly disappeared from the timing screens on lap five. Debris could be seen flying into the air at the back of the circuit, and news quickly filtered through that the red-hot favourite had crashed heavily on the exit of the Hayshed. The bike was basically destroyed, but the reigning champ appeared unhurt. 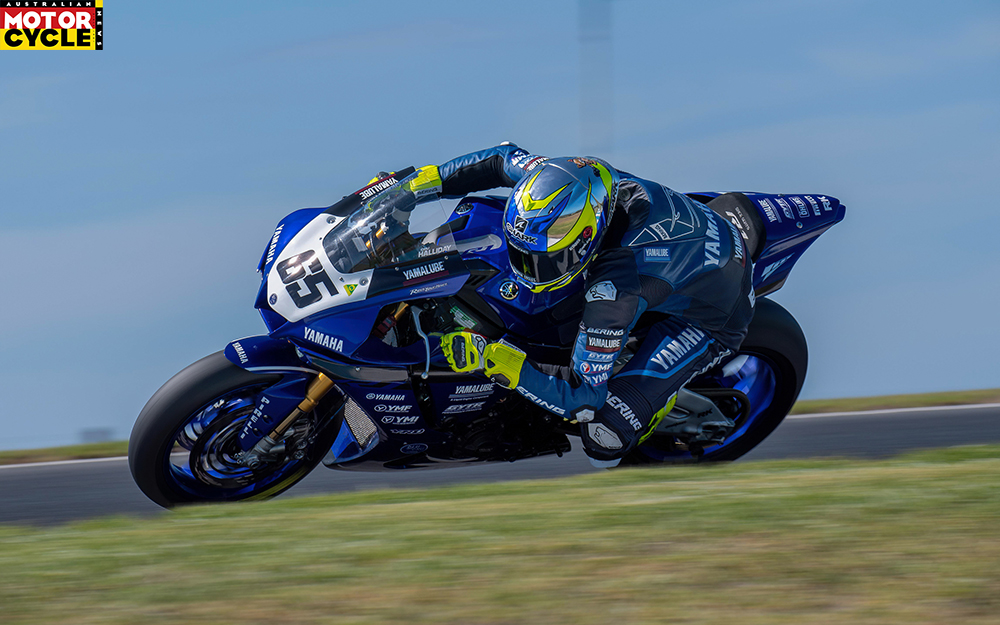 Staring inherited the lead after looking very stable himself in the opening half of the race, almost five seconds ahead of second placed Jones who had battled past Waters. Halliday had fought his way past Glenn Allerton (Maxima Oils BMW) who was being hindered by a nasty ear infection, as well as the still recuperating Daniel Falzon (William Adams CAT). 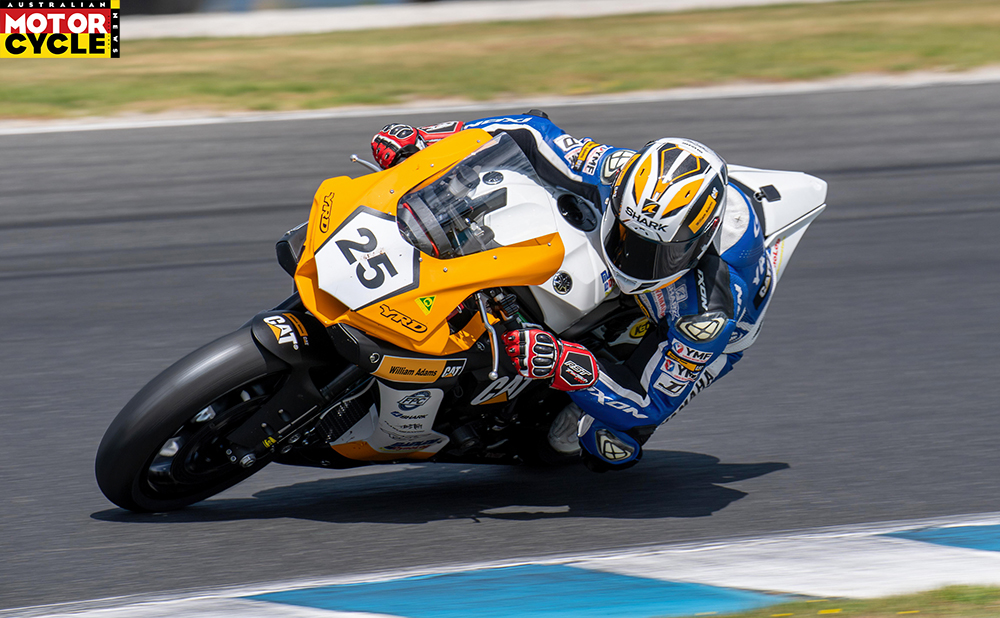 Sissis was fading with the softer tyre and soon enough, Halliday was hunting down his teammate Mike Jones for second. Further back, Aiden Wagner (Addicted to Track) had pushed past Allerton for seventh, with Matt Walters (Kawasaki Connection) also applying pressure. Out front Staring was in total control while Halliday had found a way past Jones with only a few laps remaining. Jones threw everything at his teammate in the final laps, but was unable to find a safe way through. At the flag, it was a comfortable and emotional victory on debut for Bryan Staring with Desmosport Ducati – his first victory since The Bend in 2019. 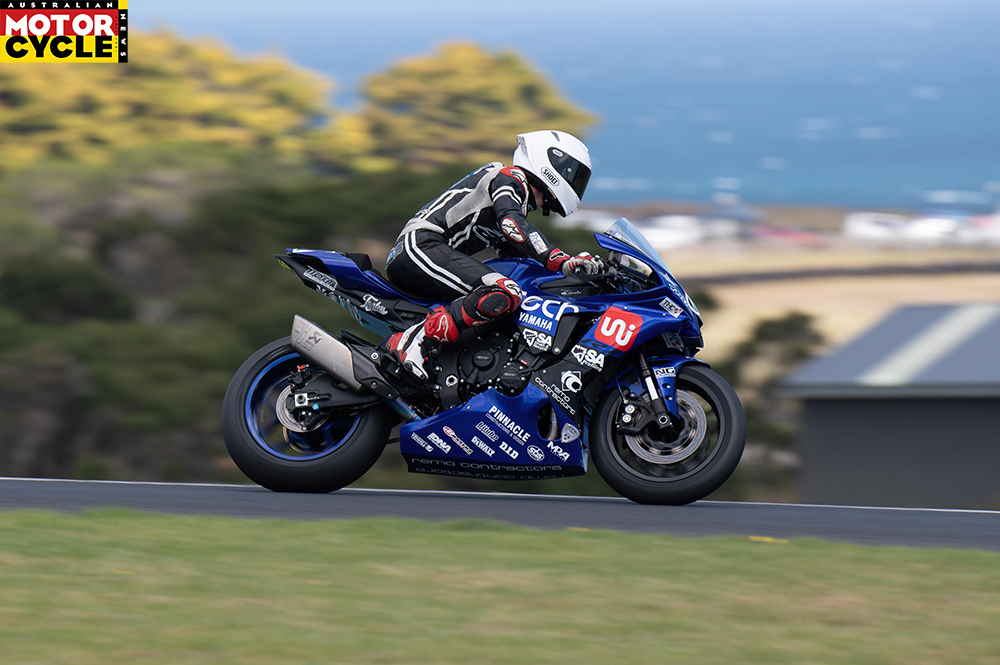 Halliday battled to a strong second after a tense struggle with his YRT teammate Jones, with Josh Waters also impressing on debut for BMW in fourth and the wounded Falzon fifth. Allerton hung on for sixth, Wagner claimed seventh with Sissis dropping to eighth. Matt Walters finished ninth with Anthony West (MotoGp Yamaha) fighting setup problems to round out the top ten. 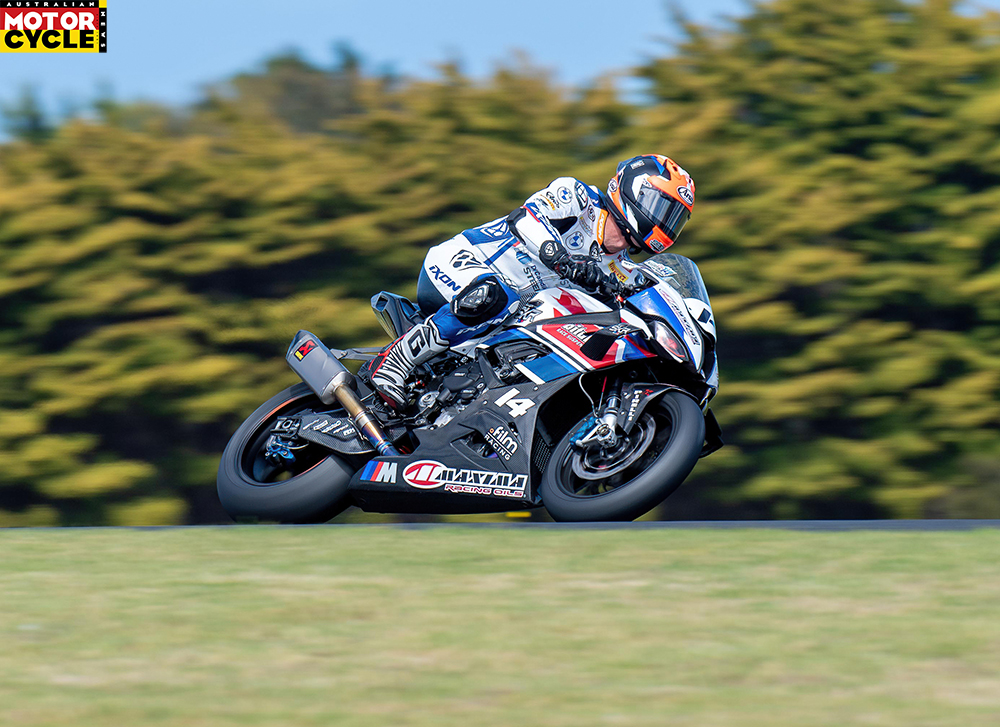 All eyes were again on Maxwell for race two – the pressure elevated slightly – one DNF can be recovered but a second DNF would be far from ideal. On his spare bike, Maxwell again was quick off the line and quick to establish a slight gap back to Staring and Halliday.

By mid-race distance the gaps were opening in the top five, Maxwell firmly in control back to Staring and Halliday, with Jones, Waters and Falzon in chase. Behind them was Allerton and Sissis – this time the South Australian was using a harder tyre but still struggling to hit the hot pace he had earlier in the weekend. Aiden Wagner cracked the top ten with an incredible move on West and Jed Metcher (727 Moto) at Honda Corner, and as the laps closed down Staring was feeling the pressure from Halliday. 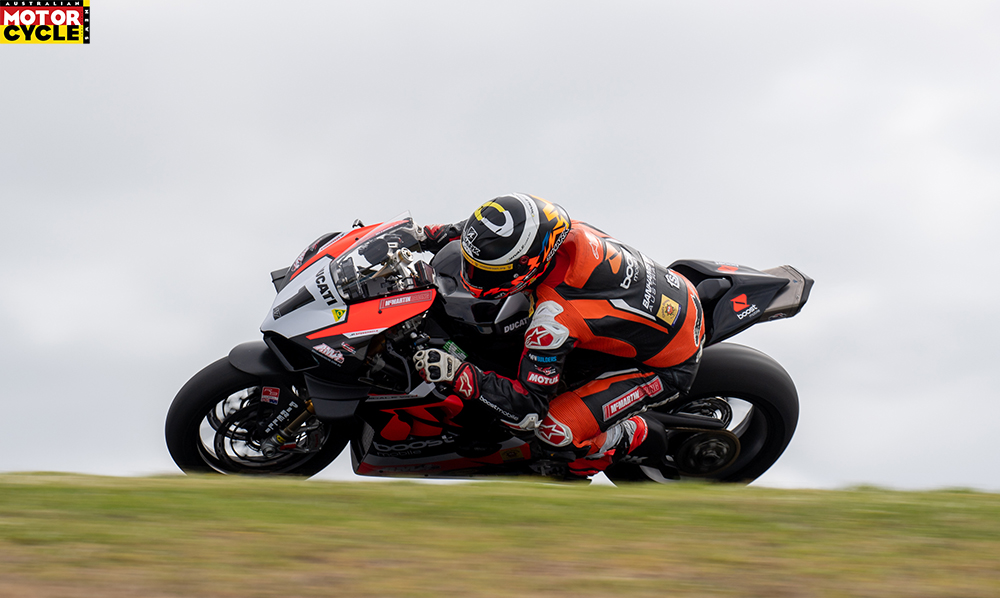 The Yamaha was showing great drive and outright horsepower against both the Ducati and BMW, and with a lap to run Halliday looked a real chance to snatch second. With Maxwell taking a commanding victory, Halliday looked hungry. Staring was definitely up to the task, holding his nerve to hang on for second and seizing the championship lead. 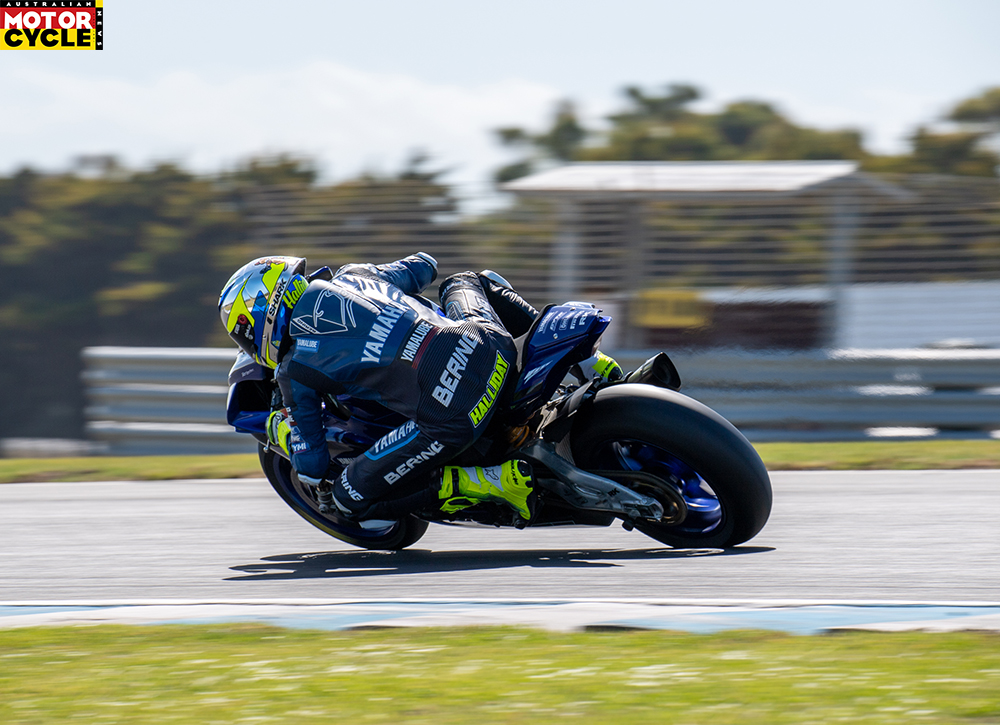 Jones was again impressive in fourth ahead of Waters in fifth.

For Maxwell, race two was redemption. “The boys did a great job between races preparing the second bike. I can’t apologise enough for the mistake in race one. Now it’s time to go and get the body healed, I’m a bit sore after that crash.” 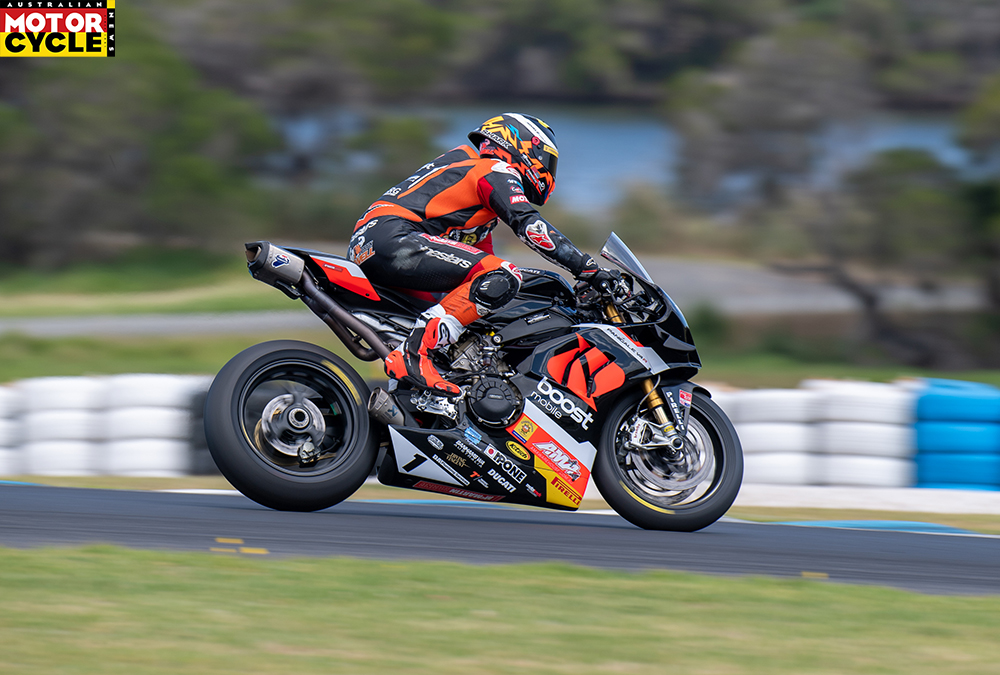 The YRT Yamaha’s leave Phillip Island in a solid position, with Halliday left to lament his start technique, saying, “I just panicked off the start of race one – first race jitters! I think I need to head to the Eastern Creek drags, throw fifty clutches at it and really sort my starts out.”

Bryan Staring is now the surprise championship leader as the series heads to Queensland Raceway in three weeks on March 18-20. 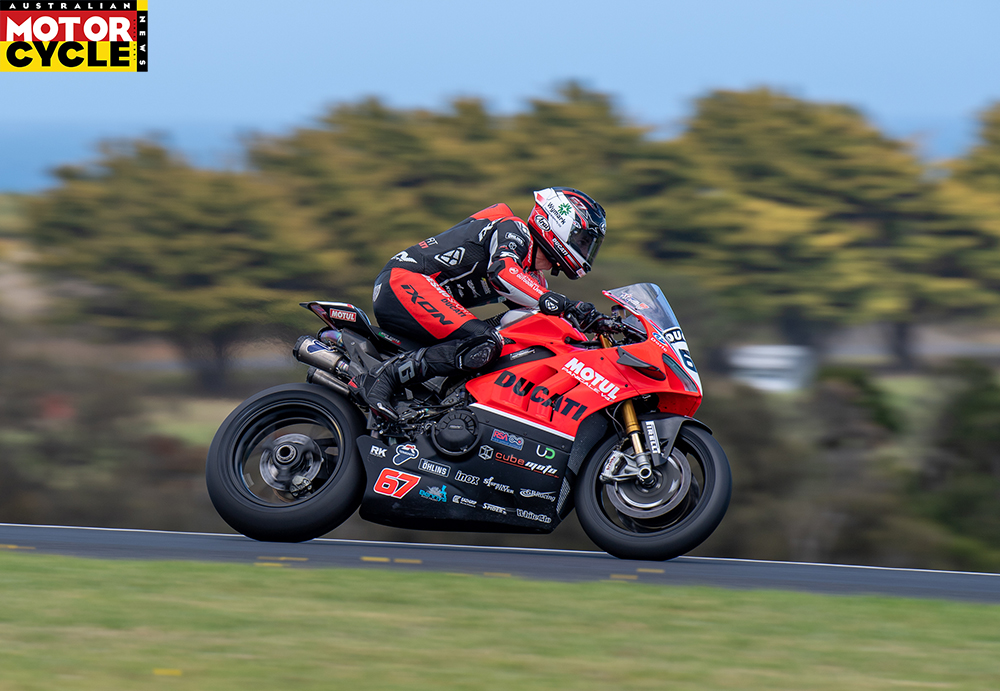 I can’t believe the day has panned out the way it just did. It’s not that I didn’t think we could do it, it’s just that you never know what will happen until race day. In the first race Wayne probably wouldn’t of known he was edging away from me, but he would have seen from his pit board that he wasn’t doing a lot of damage. I think if there wasn’t anyone so close to him he wouldn’t have made that mistake. That’s just how racing is. In the lead up he’s been untouchable, and he beat us in the second race – but we’re still discovering things that we need from the motorbike that can make me stronger. 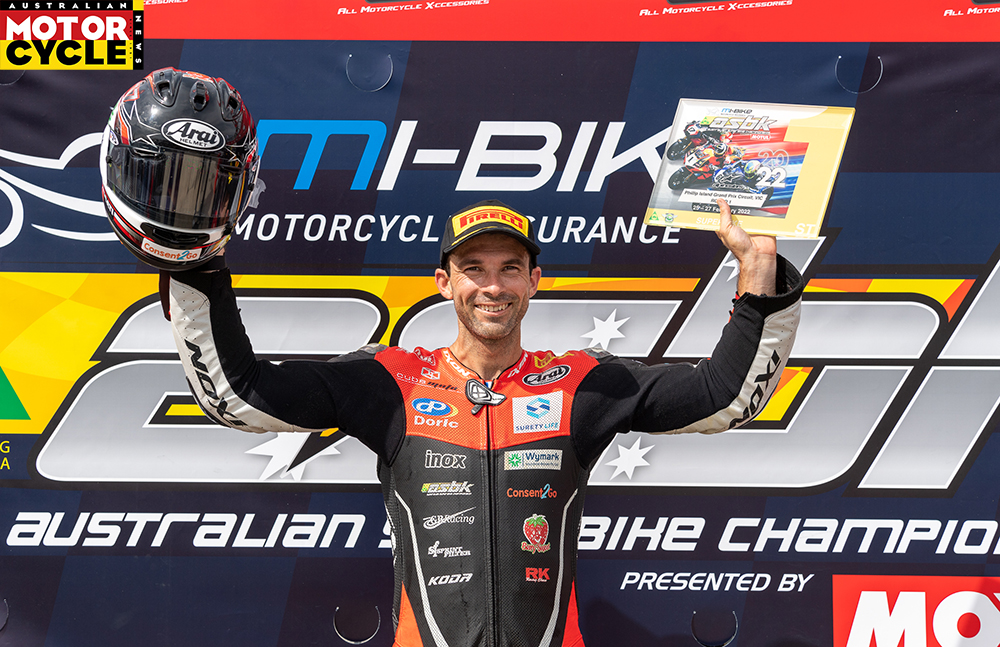 Earlier this year we exclusively revealed Honda’s plans to relaunch the CRF1000L Africa Twin in 2020 with a larger-capacity engine (AMCN Vol 68 No 17). Now we’ve got our hands on detailed technical specifications long before Honda wants them to be made public. Ch