Ducati has unveiled the new Multistrada V4 to the world during its World Première web series.

In 18 years, over 110,000 Multistrada units have been produced and since its inception in 2003 it has been able to evolve, expanding its scope of use. The first Multistrada was a sports bike, with good torque and mainly suitable for road use. The 2010 version was the first “four bikes in one”, the first bike in the world with Riding Mode. In 2015, however, the first engine equipped with variable timing was presented, which improved the smoothness of delivery. 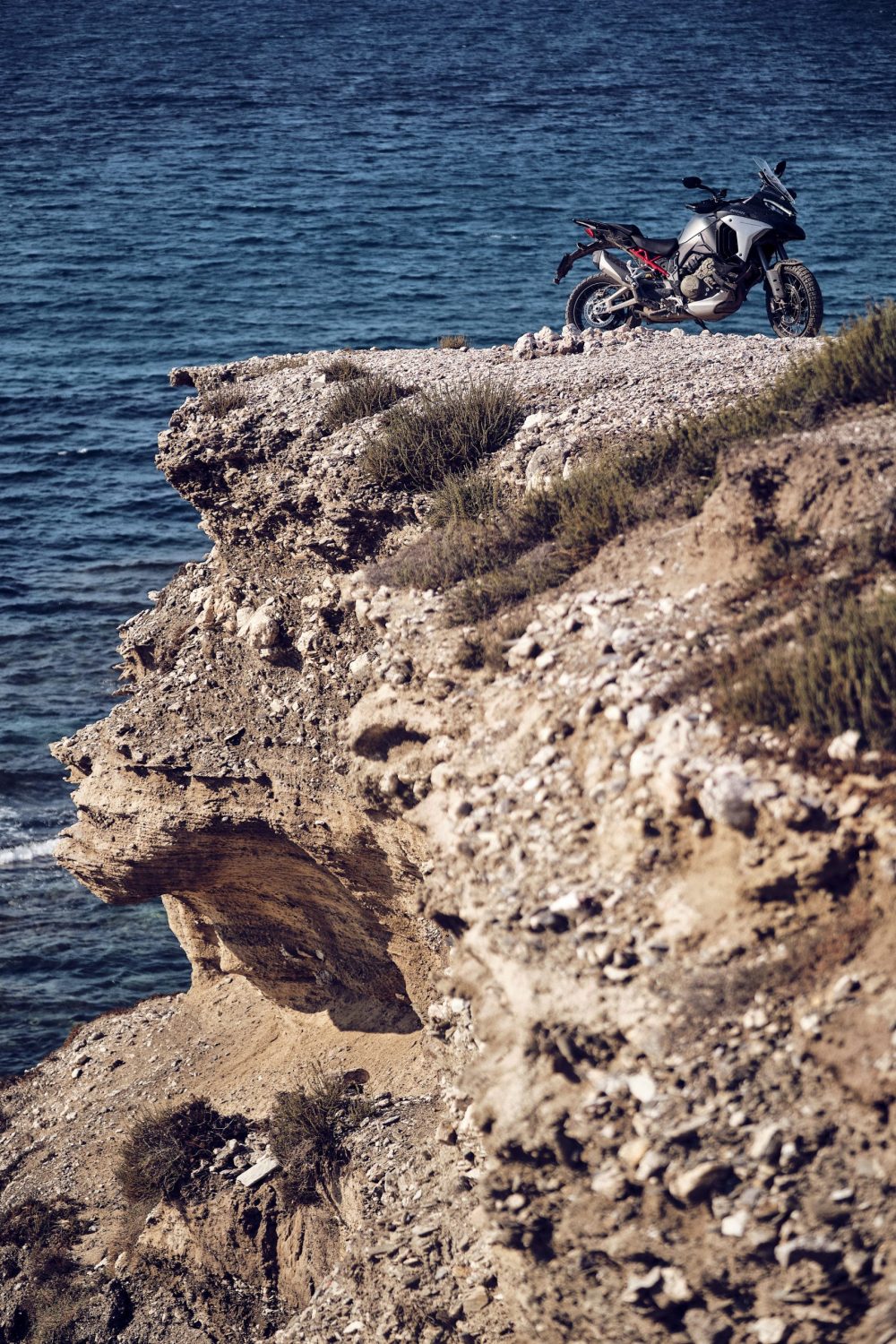 The fourth generation of Multistrada is an even more performing bike, but still easier to ride. More robust and at the same time lighter. More versatile and comfortable, but effective in all riding conditions. 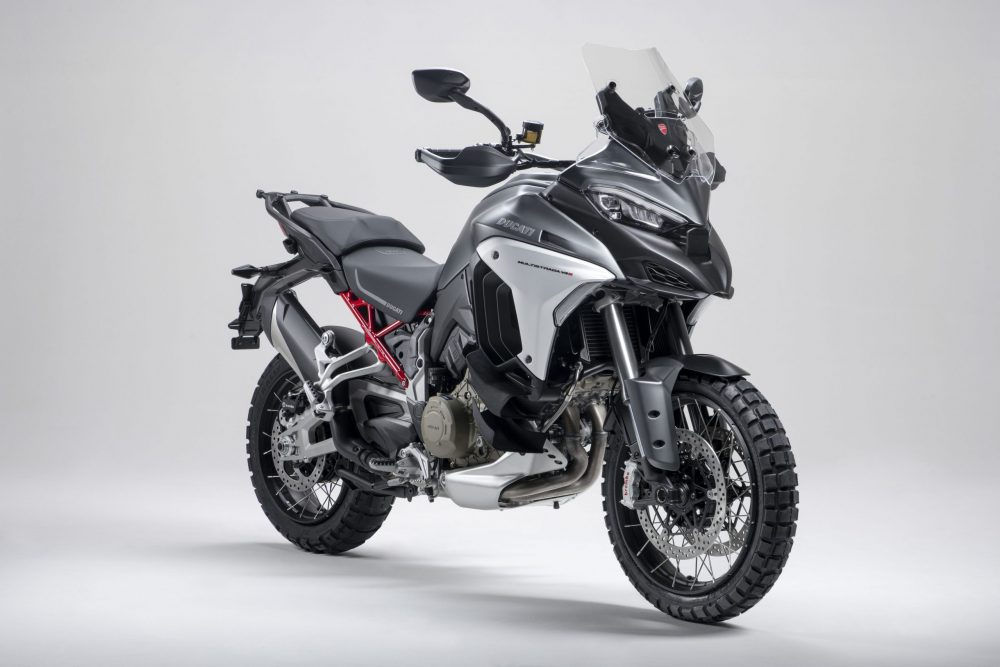 The Multistrada V4 is “Sport” because it is light and compact, has 170 hp, electronic MotoGP aids and a chassis with agile dimensions for an exciting and effective ride on mixed terrain. It is “Touring” thanks to the main maintenance intervals set every 60,000 km, to the obsessive attention paid in the development phase to ride comfort, to the Radar systems (the first motorcycle in the world to have both front and rear), to the map navigator that can be viewed on the dashboard and to the cornering lights. It is “Enduro” thanks to excellent off-road capabilities, electronic suspension, smooth delivery, and gear ratios. It is “Urban” because it guarantees great ease of use at low speeds, but also thanks to smartphone connectivity and a careful study of thermal comfort. This explains why dominating all the roads has never been so easy. 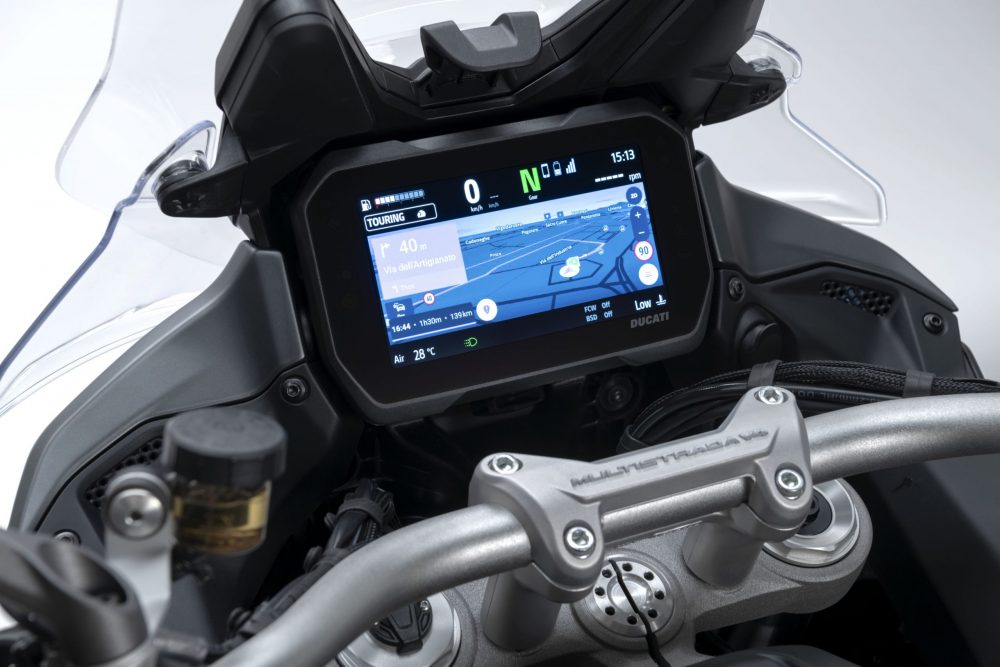 The design work done on the Multistrada V4 is extremely functional to its technical spirit and has given rise to a solid, robust, yet refined aesthetic result. Ducati designers have worked on the proportions and compactness of the motorcycle body within the wheelbase, to favour the perfect combination of form and function. This fact is immediately noticeable by the predominant volumes on the front with muscular but sexy lines to integrate the 22-litre tank, combined with the slim rear that allows an optimal riding position even when standing in off-road sections. The study of the aerodynamic flows was aimed at guaranteeing the maximum possible comfort for the rider. 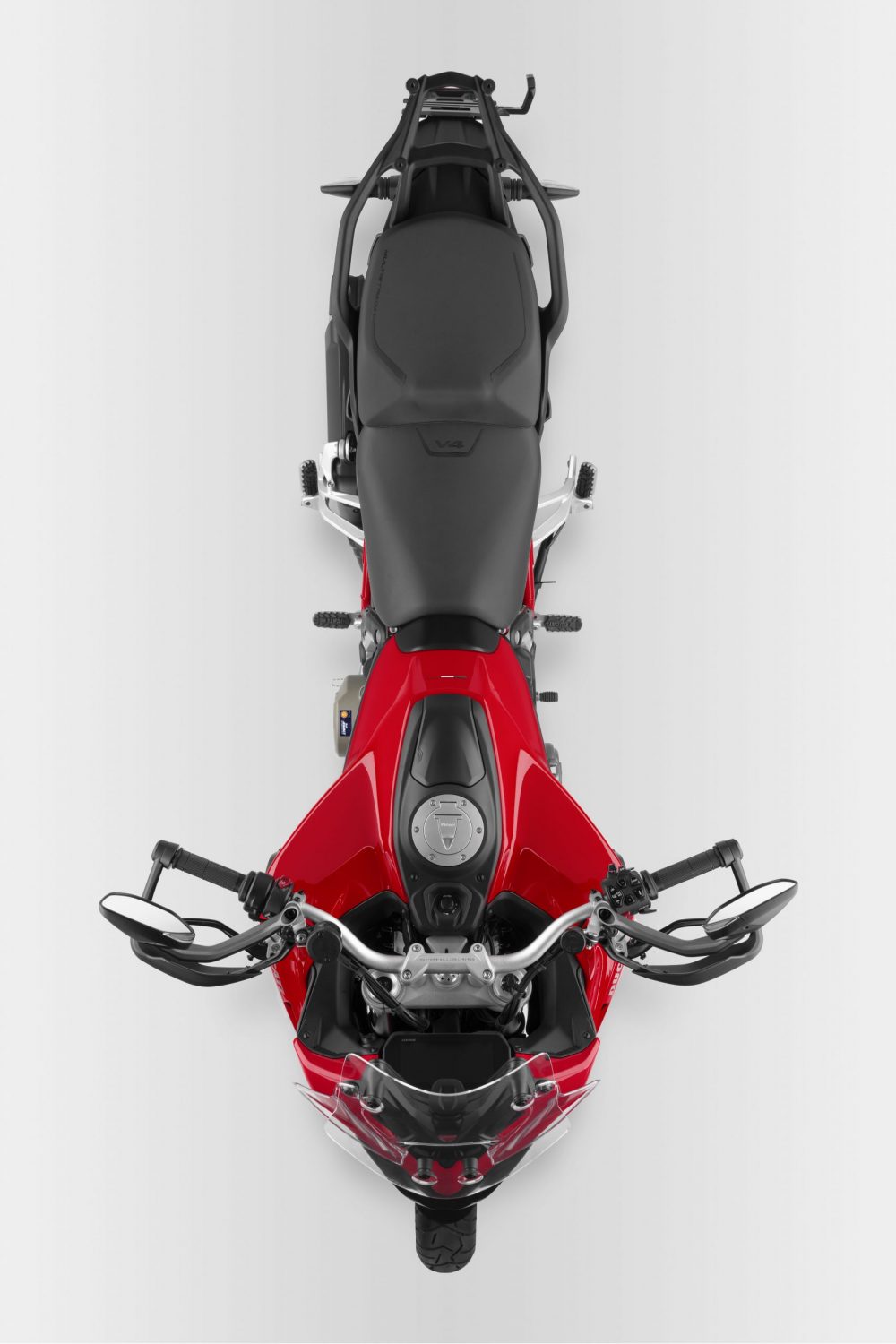 The engine is the real beating heart of this bike: the V4 Granturismo. Lightweight (66.7 kg) and compact, it has a lot of punch but proves to be exceptionally smooth and fluid at low revs, with a lot of backbone in the mid-range and exciting at high revs. The V4 Granturismo has a displacement of 1,158 cc and delivers 170 hp (125 kW) at 10,500 rpm with a maximum torque of 125 Nm (12.7 kgm) at 8,750 rpm. In addition, adopting this engine allows for a significant lengthening of maintenance intervals: on the Multistrada V4 the oil change is scheduled every 15,000 km, while valve clearance check and eventual adjustment is required every 60,000 km. No bike in production goes that far. 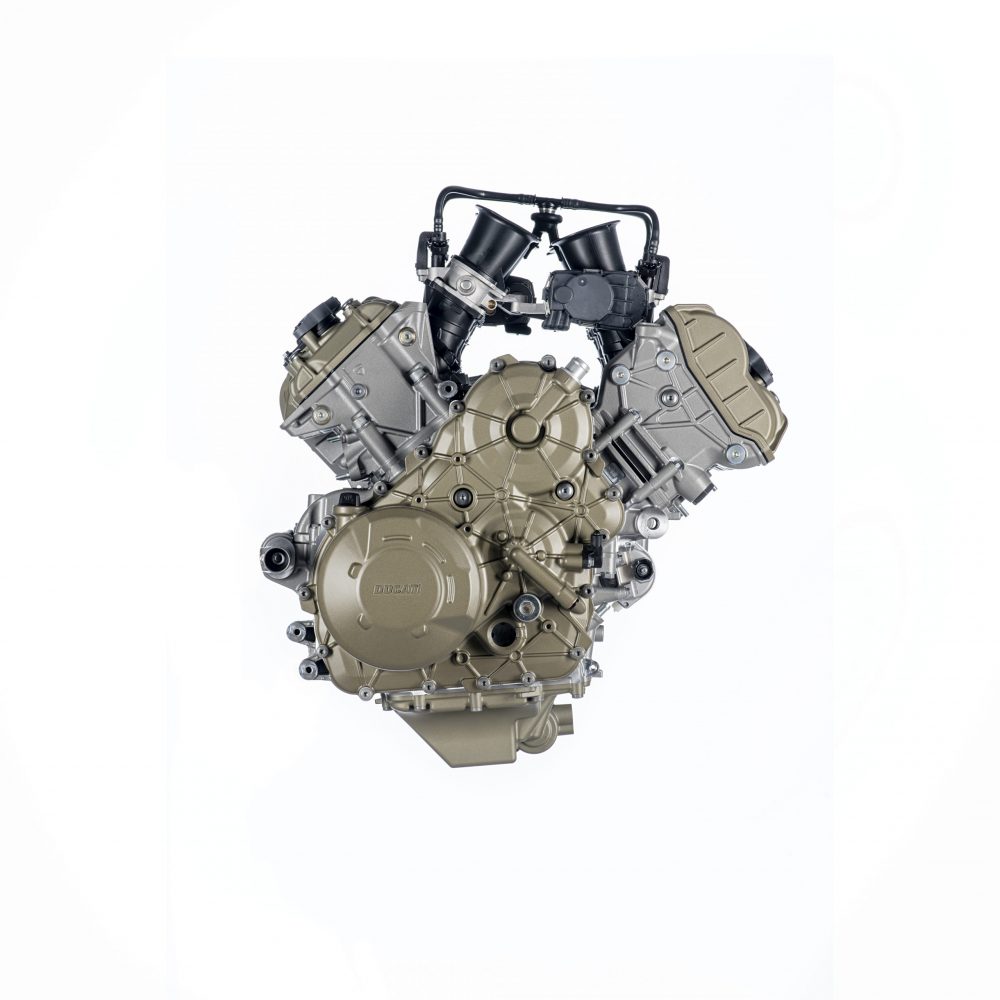 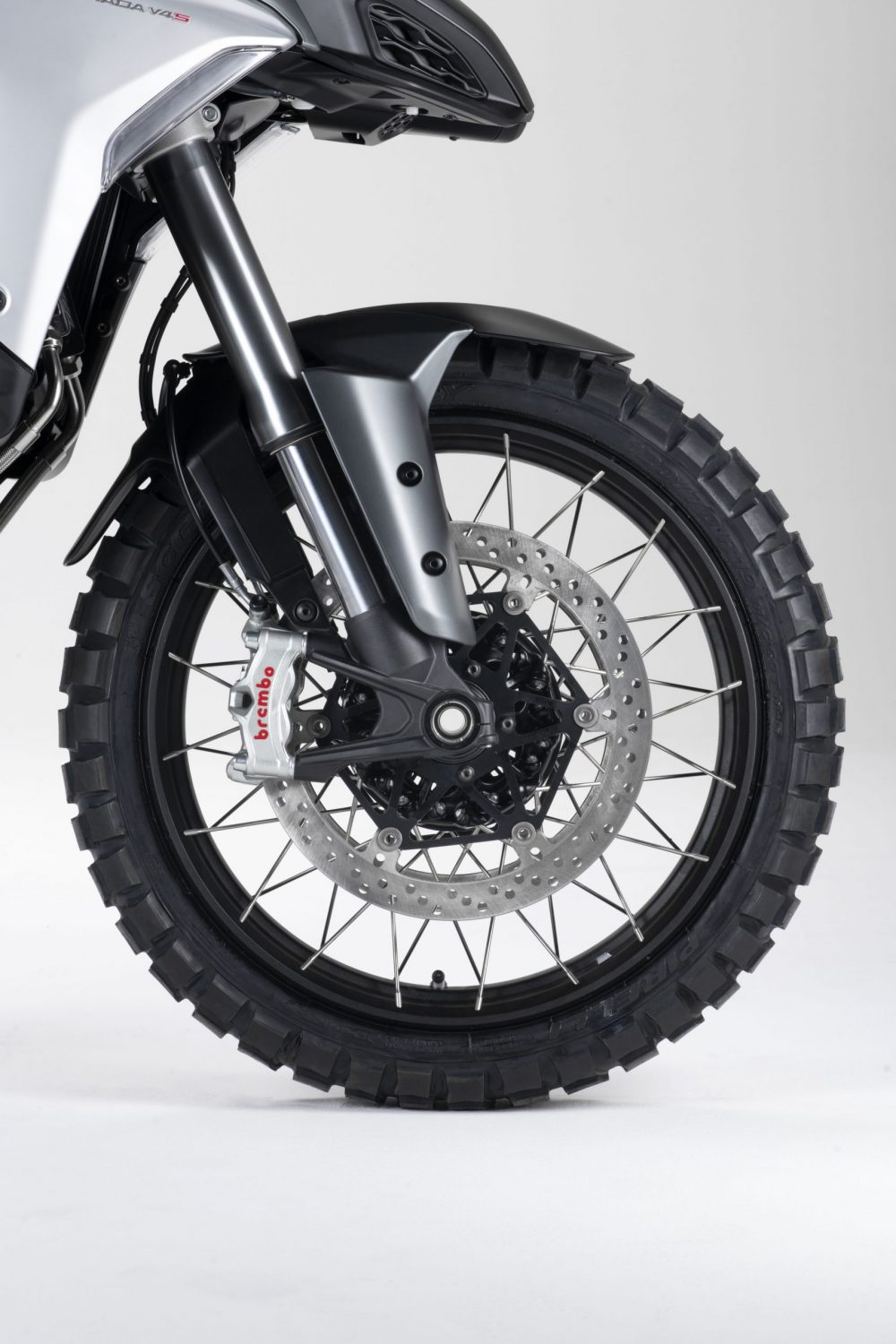 With the Multistrada V4, Ducati also introduces an absolute first in the world of motorcycles: the revolutionary front and rear radar system, which allows the use of Adaptive Cruise Control (ACC) and Blind Spot Detection (BSD). Radars are advanced auxiliary systems that Ducati has developed together with a top-level technological partner such as Bosch and are able to support and make riding more comfortable thanks to the ability to reconstruct the reality surrounding the bike. 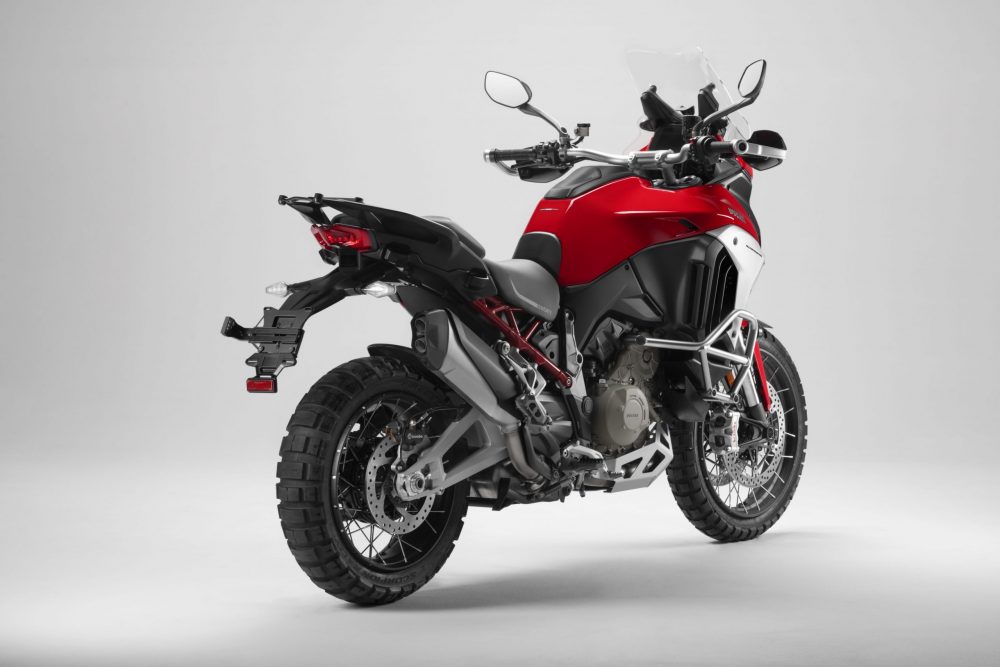 The Multistrada V4 is equipped with an aluminium monocoque frame, 19-inch front wheel and double-sided swingarm, capable of accommodating spoked wheels. It has a limited wheelbase (1,567 mm), a sporty front end, suspension with large travel (170 mm front wheel and 180 mm rear wheel), ground clearance of 220 mm and a dry weight of 215 kg. All this allows the Multistrada V4 to be intuitive and effective around the corners like a real Ducati and at the same time easy to ride and versatile for both on-road and off-road use. 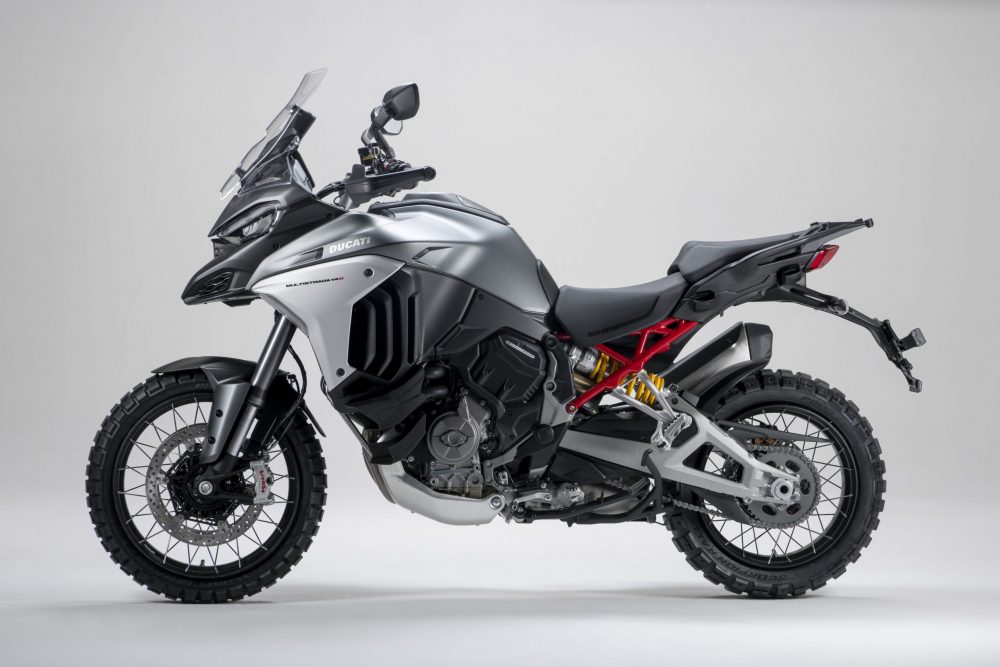 With the aim of making long motorway journeys more comfortable, Ducati engineers paid great attention during the design and development phase to what in the automotive world is called Noise, Vibration, Harshness (NVH), or rather the measure of the general level of comfort of the vehicle. 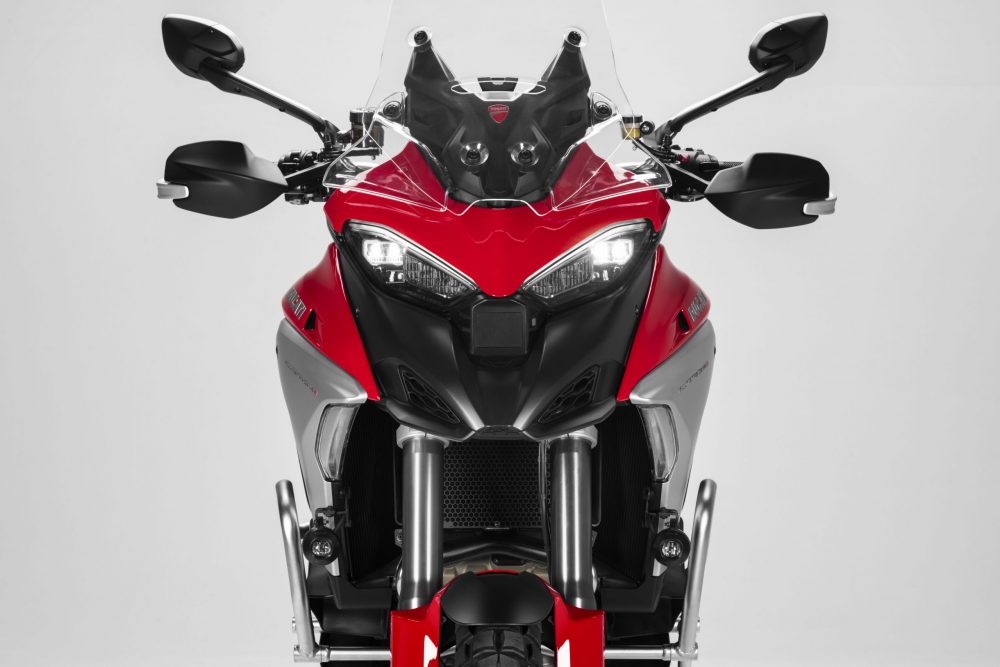 In this sense, a careful aerodynamic study – also in the wind tunnel – was carried out to obtain the best possible protection for the rider and passenger from the air, reduce hissing noises and divert the heat coming from the engine away from the rider’s legs. The result is a Plexiglas screen with a new shape, adjustable in height with a single finger, associated with two side deflectors. The shapes of the handguards and the parts most exposed to the air have been studied in detail, as well as the “sound” of the engine, which is refined but always present and with the Ducati tone. The V4 Granturismo engine also adopts the strategy of deactivating the rear bank at idle. In this way, when the bike is stopped at the traffic lights, the rear bank is deactivated (there is no combustion in the cylinders), thus improving the thermal comfort of the rider and passenger thanks to a lowering of the temperature and reducing the fuel consumption. 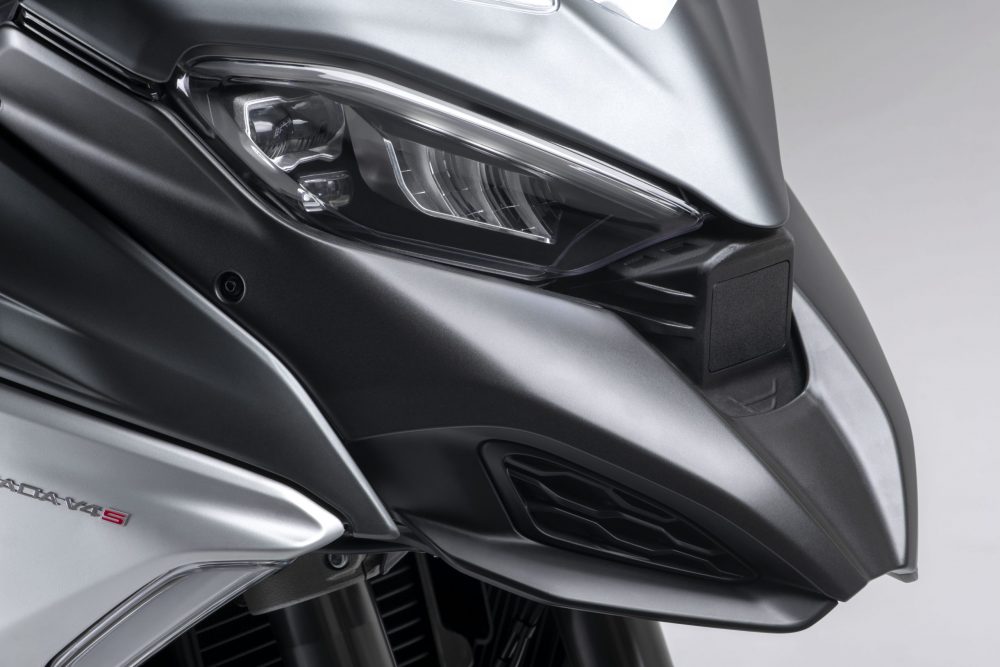 The Multistrada V4 has many different configuration possibilities to meet the needs of the most diverse customers. The standard V4 model is available in red and represents the version dedicated to those who love the 170 hp engine and 215 kg of weight. 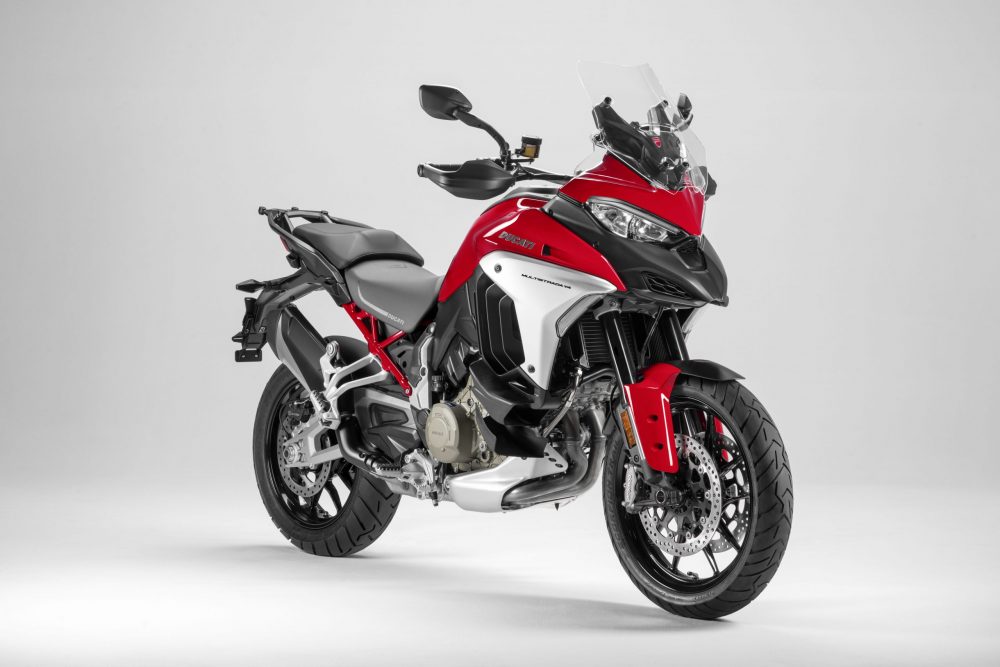 The central model of the range, the V4 S, is available in “Aviator Grey” colour as well as in red. The Ducati Multistrada V4 S can be ordered with both alloy wheels and spoked wheels. For this motorcycle, Ducati has thought of a new package of configurations that can be ordered directly from the factory (Essential, Travel, Radar, Performance, Full). 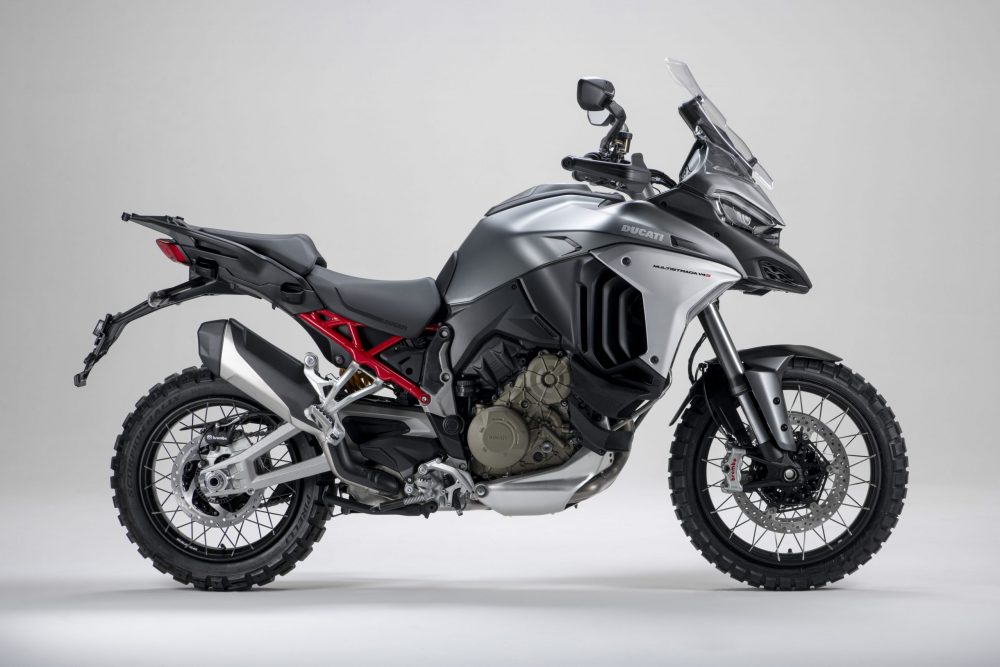 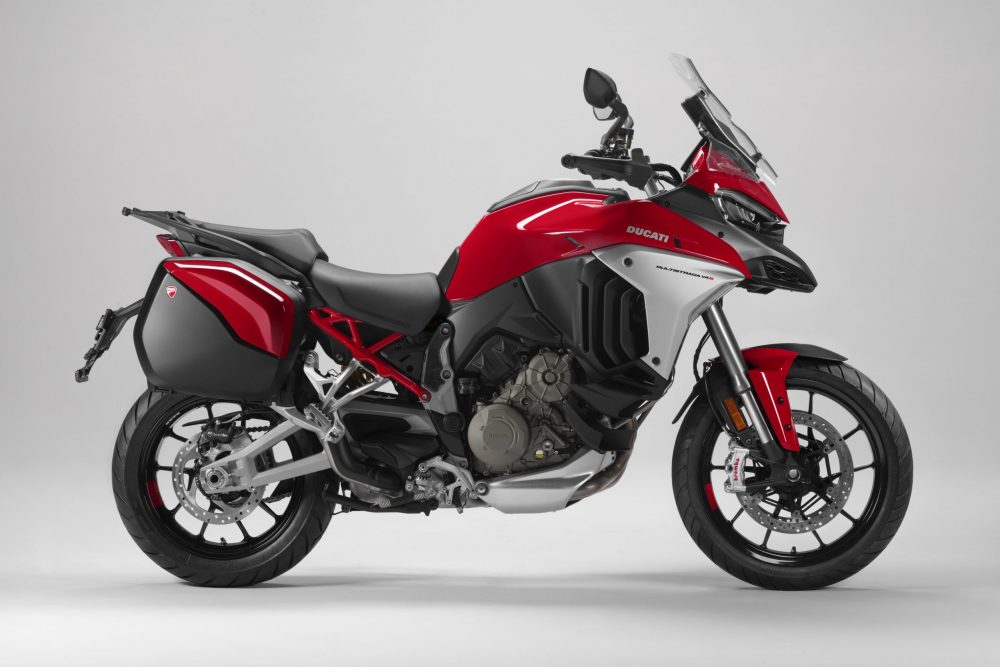 The third version is the Multistrada V4 S Sport, which offers a particularly bold dedicated livery and the standard Performance package with Akrapovič exhaust and carbon front fender. 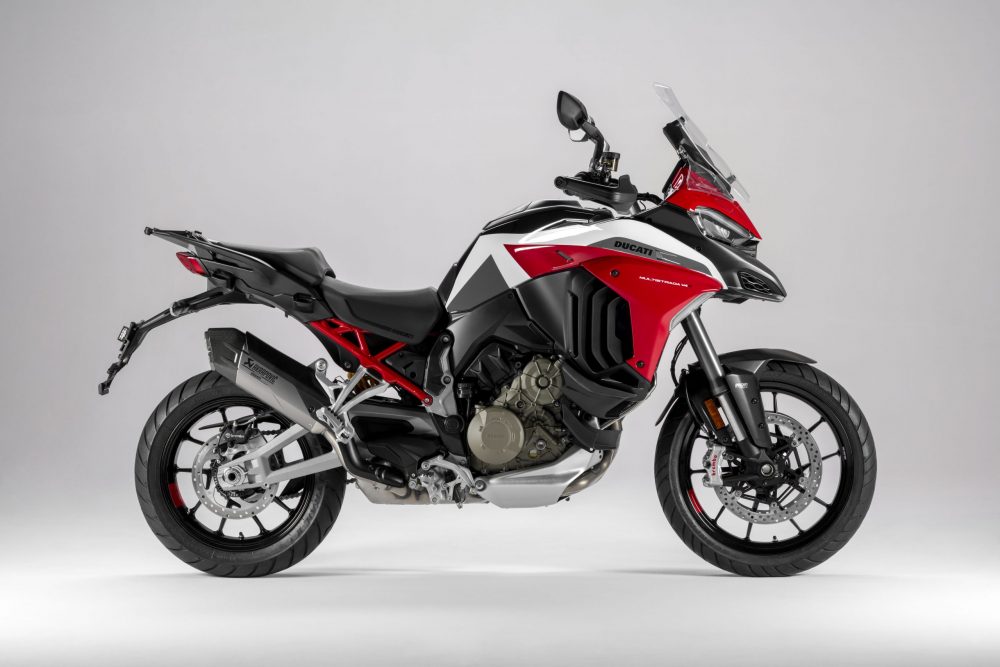 The Multistrada V4 is expected to arrive in Australia and New Zealand in the first quarter of 2021 with prices starting from $28,990 ride away.