“The Daytona 200 taught me everything I needed to know about racing,” is high praise from Freddie Spencer, as he took a look back at the famous American race. “Managing a motorcycle. Looking after a tyre. Understanding how a race was developing. I had one of my first ever road race starts there. I had my first big crash there. I had some of the best races of my career at Daytona.”

It’s hard to find a greater race than in 1984. This was a seminal moment in motorcycle racing because it perfectly illustrated the Golden Age of American racing. Six years earlier, Kenny Roberts went to Europe and dominated the Grand Prix scene from the outset. Freddie Spencer was 10 years his junior, and the younger racer quickly established himself as the most natural rider in the world.

With Eddie Lawson on the verge of his first 500GP World Championship in 1984 and a host of young riders coming through in Randy Mamola, Wayne Rainey and Kevin Schwantz, it was clear that the American talent pipeline was healthy. The big stars all went to Daytona in 1984 for the Daytona 200.

With so much riding on this event, Spencer picks out the 1984 Daytona 200 as the most important of his career. For the youngest-ever world champion, Daytona was still unfinished business. The 1984 edition was his last chance to prove himself against King Kenny Roberts and his opportunity to finally win the big one.

Roberts, who was coming out of retirement for one last outing, was back on the grid to prove that he was still the King, while Spencer knew this was his last chance to prove he was America’s top racer. Amazingly Lawson, leading the World Championship and set to win the title, was almost seen as an afterthought for Spencer and Roberts.

As a 16-year-old turning professional, King Kenny Roberts had always been the target for Spencer. In the domestic scene, all young riders were compared to Roberts, but by 1983 the American duo were head and shoulders above the rest of the riders in the world. They won every race in the 500GP World Championship.

Their battle for the title was a private one and Spencer would eventually prevail by just two points. The pivotal moment came in Sweden, at the penultimate race, when they clashed at the final corner. Spencer claimed the win and went on to claim the title, but Roberts ended his 500GP career with a victory at the season-closing round. 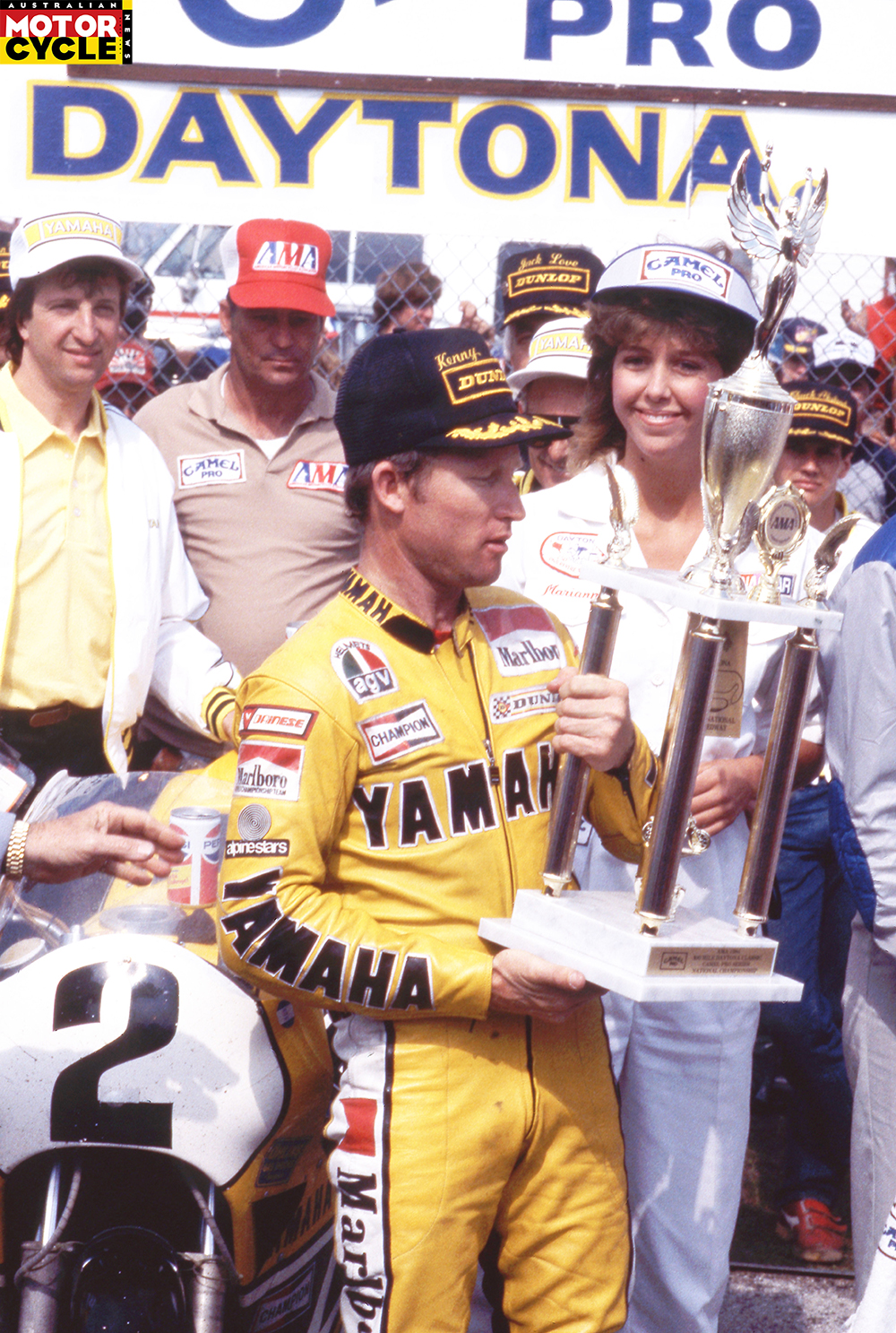 “I remember watching Kenny racing at Daytona and it was special,” reflects Spencer. “I’d already seen him racing Flat Track at the Astrodome in Houston, but watching Kenny ride at Daytona was different. I did think that, maybe, one day I’d race against him and it looked like it was going to happen in ’79, but Kenny was hurt at Sugo in Japan when he was testing in January. For three years it was all about us. The ’84 race was really important because I wanted that one badly. I knew that it would be Kenny’s last race at Daytona. This was it. There was no tomorrow.

“Everybody was looking for the battle between us. I broke the two-minute barrier in qualifying and took pole. The race was going to be very different though because the 500 was so fragile. Making it last 200 miles wasn’t easy. We also were the first team that were changing tyres during pitstops. We would only change the rears, but it meant I knew the last two laps of each stint were important to push.

“Kenny was on Dunlops and I was on Michelins. We timed everything. I knew that I was faster on the in and out laps and could pick up over a second on those laps. It was really important to be faster when I could push, and I knew that I could pick up 2.5sec on each stop. It was going to be difficult though because fuel management was so important. You could control that with throttle control leading onto the oval.”

Tyres were the big talking point in pitlane back then. By 1984 the Dunlop versus Michelin battle was almost as intense as the rivalry between the riders and manufacturers. Daytona was historically the harshest proving ground in the world for tyres. Images of Barry Sheene crashing had made him a household name after a tyre failure on the banking. In 1984, tyres would be even more critical with Spencer bringing unproven Michelin radial rubber to Florida, while Roberts and Yamaha opted for the standard construction from Dunlop.

Tyres were obviously not the only area of development. This was the final year before the regulations changed and limited displacement for two-strokes to 500cc. The 1984 Yamaha was a 695cc two-stroke weapon. The yellow and black speedblock Daytona Special had more power than sense, and at the time both Roberts and Lawson said it was too wild to race on the roads.

They would have preferred to have raced their 500GP bikes, but instead had to race the bigger, more powerful version. Amazingly Yamaha had an even more powerful engine sitting in the pit garage, but both Roberts and Lawson refused to use it. The bike was powerful enough to spin up the rear wheel almost anywhere and at any speed.

Spencer would be on his NSR500 four-cylinder Grand Prix machine, which he would use for the second half of the Grand Prix season. As ever at Daytona, the question was whether you could match that pace for over 50 laps as you weaved in and out between slower lapped traffic. 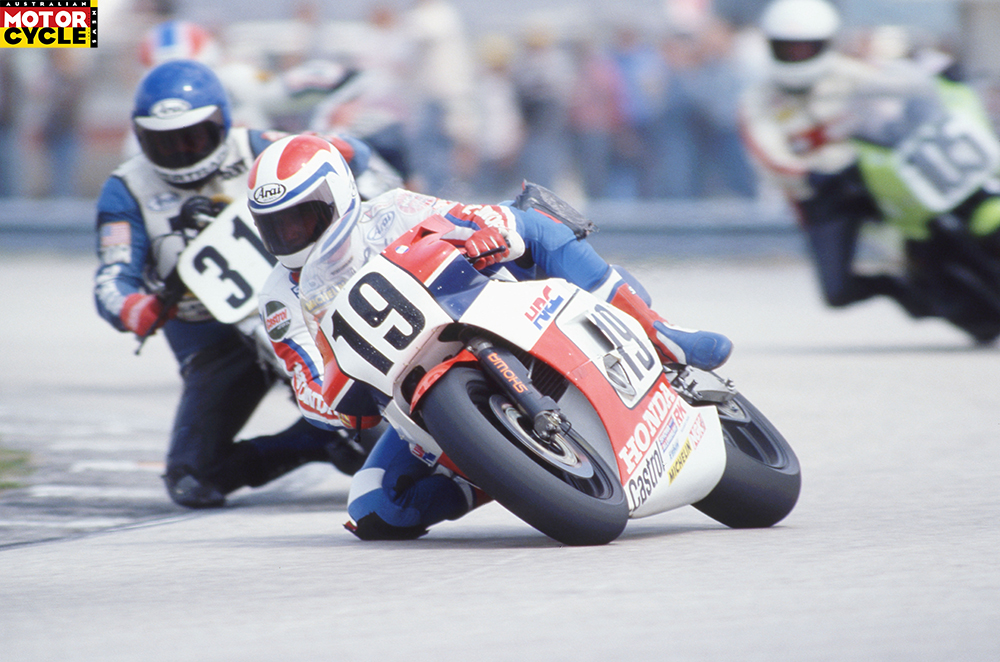 Daytona hadn’t always been the happiest of hunting grounds for Roberts. He won his first Daytona 200 in 1978, but more often than not the banking had been heartbreaking for the American. Despite three wins and seven pole positions he always felt there should have been more success in the Sunshine State. The 1974 edition was about Giacomo Agostini versus Roberts. The Italian was already a 13-time world champion, but Roberts was the reigning Grand National Champion and expected to win.

A move to Europe wasn’t on his horizon at this point, but to come home second, left him bitterly disappointed. Roberts would eventually go to Victory Lane in 1978 and 1983 before the big showdown with Spencer.

Agostini’s victory showed that the Daytona 200 was one of the centrepiece events of the international invitational calendar. The race became the biggest non-championship event of the season, because of the money and the prestige on offer. For American riders, as well as Grand Prix riders, Daytona was as important as the Suzuka 8 Hours would later become. If you were a young, up-and-coming American racer you knew that winning at Daytona was a sure-fire way to earn a factory contract with Honda, Yamaha, Kawasaki or Suzuki.

By the time 1984 rolled around, the American audience was ready for a battle royale. This was to be Roberts’ last race before retirement, while Spencer was now the man to beat in Grand Prix as the youngest ever premier class champion. That being so, the great American race hadn’t seen a great battle between their greatest racers.

After relinquishing his 500GP crown to Spencer in acrimonious circumstances, Roberts’ motivation was matched only by Spencer as they set to prove, once and for all, who was faster.

“Yes, 1984 was the one,” remembers Spencer. “It was the last year of the original circuit and I knew it was going to be Kenny’s last 200. This was it and I wanted to win it. There was no tomorrow. It was now or never. I’d beaten him to the world championship in ’83, but I wanted to beat him at Daytona too and everybody was looking for that battle.

“That being said, Daytona was tough. I was fast there and I led it every year from 1980 to 1983, but Daytona was such a unique race. Kenny and I were sprint racers who had to adapt to a 200-mile race. That challenge was why I liked the Daytona and what made it so special. The ’82 race was the greatest race I never won. I finished second to Graeme Crosby but it was a great race because it made me utilise all my skills in throttle control, lean angle, trajectory, tyre management, and fuel conservation. Mastering all these elements was what made Daytona special.”

What made Daytona special in 1984 was the fact that Roberts, Spencer, Lawson and a host of other riders lined up on the grid knowing this should be a record-setting race. There was no way of knowing who would come out on top. 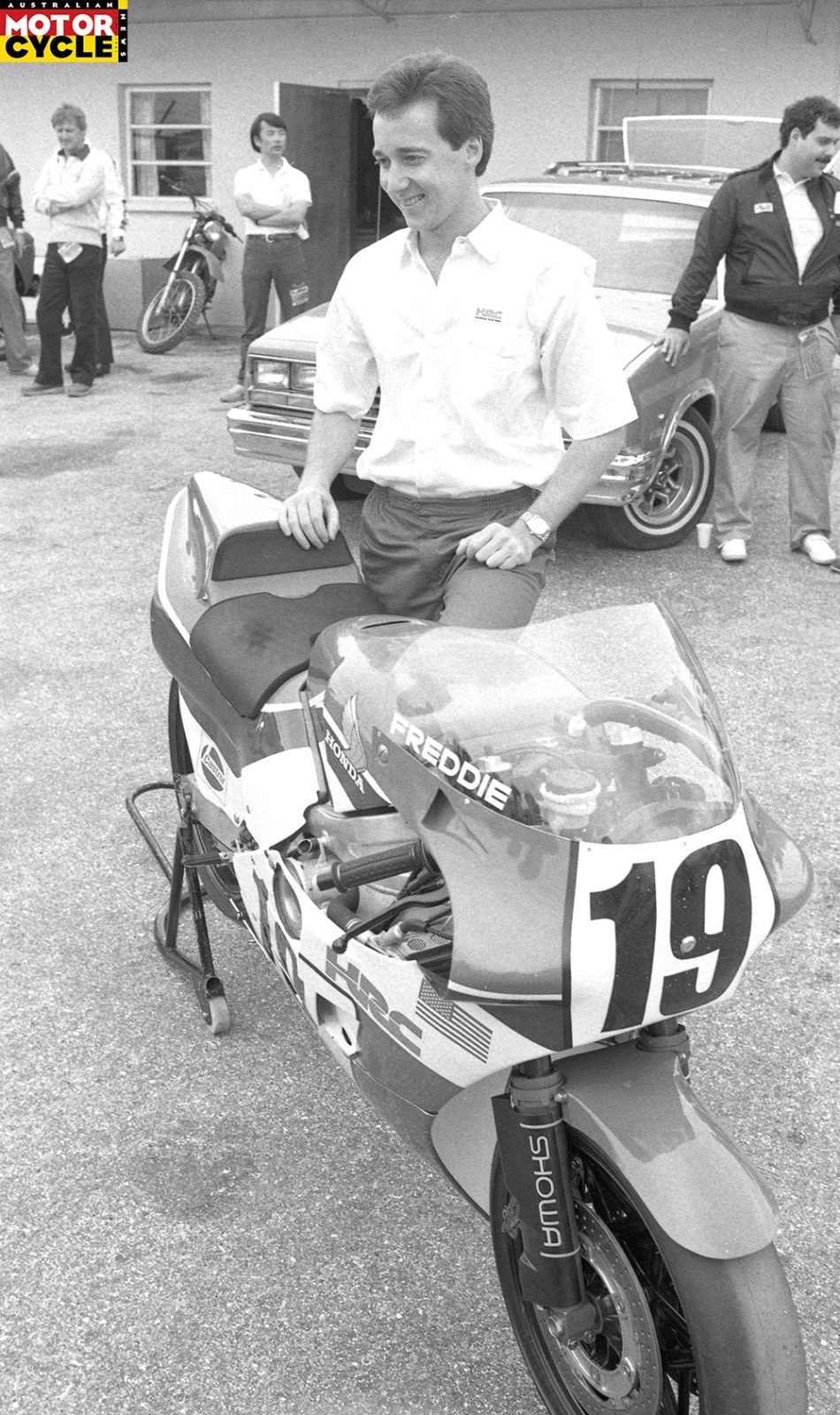 From the start of the race, fans saw Lawson and Roberts shoot into the early lead. The factory Yamaha duo were aggressive out of the blocks, whereas Spencer was slow starting on his Honda. The plan was to build into the stint and get the tyres up to temperature. As ever, Fast Freddie wasn’t flustered and made progress to close back onto the Yamahas in front.

At the first pitstop, all eyes were on Spencer and Honda. How much time would it cost them to change tyres? They lost time to Roberts in pitlane but the outlap was all about Spencer and, suddenly coming through traffic they were nose to tail. With Spencer set to take the lead, the day was effectively over for Lawson. Tyre woes meant he needed to change his rear tyre and suddenly the battle the crowd came to see was underway; Roberts versus Spencer. The King versus The Contender.

Ultimately the fragility of the Honda would be the difference between the pair, with Spencer’s NSR500 developing an issue just four laps before his second pitstop. This was when he expected to start pushing before his stop to hold onto the lead. After the stops, it was damage limitation for Spencer and he followed Roberts home in second, but was over a minute adrift at the flag.

“I started hearing the change in the engine pitch,” he recalled. “I led into the second fuel stop and I came out in front after Kenny had a problem with his stop. I felt good but about three laps into that last leg, the pitch of the engine changed completely. Kenny caught me. He took the lead and I finished second.”

When the race finished it was clear that Roberts wasn’t keen to race again. He had returned at the behest of Yamaha and while he had collected his third Daytona 200 victory, it was the final major race victory of his storied career. Over the course of race week it was clear that he was limiting his running with safety more and more of a concern. Laptimes getting faster and faster and top speeds had jumped from 175mph to 200mph. At 33 years of age Roberts had nothing else to prove. He would only race again on a handful of occasions but never again on the banking of Daytona.

For Spencer, the following season would finally see him scratch his Daytona 200 itch by winning. He would go on to make history by winning the 250cc and 500cc GP title double but after 1985 he would never stand on a grand prix podium again. At 23 years of age his career was now on the wane with injuries taking their toll. The man that defined ‘phenom’ was now succeeded by Lawson as America’s star. 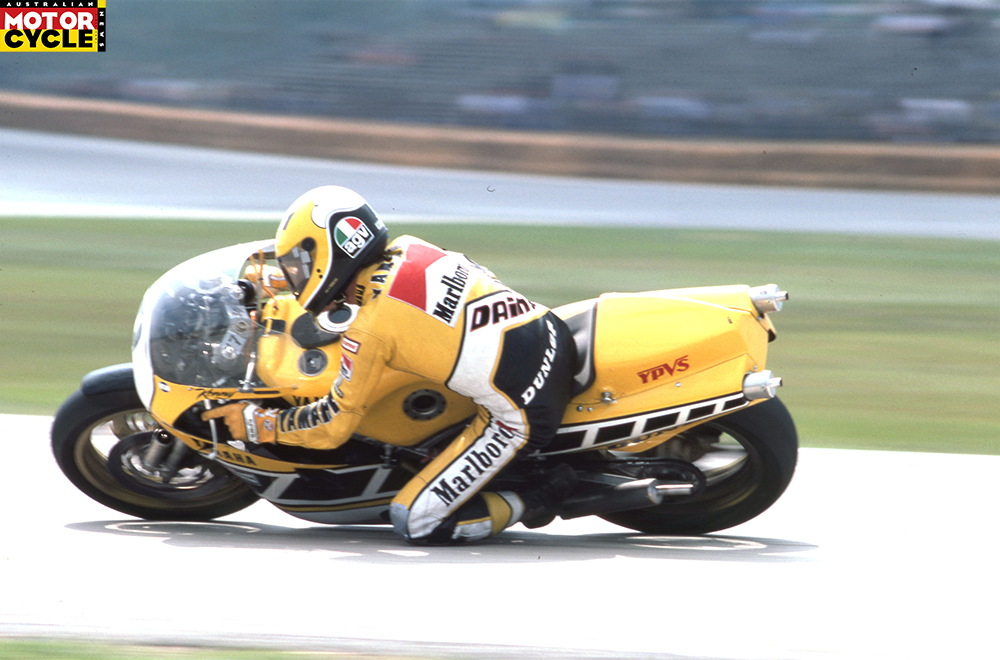