The 2017 version of Suzuki’s big bird is here, and it’s still a cult hero

In a previous life as a motorcycle salesman, if there was ever a bike I didn’t have to try too hard to sell it was the Hayabusa. Anyone who came in and started sniffing around the GSX1300R already knew they just had to have it. Unless you’d been living under a rock since 1999 everyone had heard of the rivalry between Suzuki and Honda and their goal of building the world’s fastest production motorcycle.

I love the story behind the naming of the Hayabusa – Japanese for Peregrine Falcon, because it preyed on Blackbirds. It’s like an old mythical fable, the stuff legends are made of. You can almost picture a Japanese Manga-style cartoon with a Falcon swooping down on a defenceless little Blackbird with a Tarantino-esque soundtrack. Or maybe that’s just me.

There was such a lot of hype surrounding the Hayabusa when it was first launched, but could this big ugly brute of a thing live up to it? You betcha. It attracted an instant following and still owns a cult-like status today. Suzuki like to pitch it as the ‘Ultimate Sportsbike’ and there are many fans out there who would agree. Although it has received tweaks over the years, Suzuki has been careful to preserve the look of the original incarnation. And while it did undergo one big update in 2008, the heart and soul of the GSX1300R remain the same. For 2017, the only change has been to the paint.

The big Suzuki still offers up an enormous 145kW of power, but delivers it very smoothly. It’s not only super quick in a straight line, it’s not too shabby in and out of corners either. While earlier versions could be a bit cumbersome to throw through the twisties at great speed, I found that the new bird tips in a fair bit easier.

The ’Busa’s styling has become instantly recognisable, with its aerodynamic mouldings and ripped muscular appearance both striking and functional. The bike is also surprisingly comfortable. Although it’s not reflected in the wheelbase figures, it feels long and stretched out, like a bike set up for the quarter mile.

The Hayabusa is powered by a 1340cc liquid-cooled DOHC in-line four-cylinder engine, housed in a strong but lightweight twin-spar aluminium frame. The front fork and the single rear shock absorber both have fully adjustable spring preload, compression and rebound damping. As for anchors, the bike has dual 310mm discs with radial-mount monobloc Brembos and a 260mm rear disc, which combine to bring the big girl to a halt very well. Should it be required, ABS is there to assist, as are several other aids such as the standard steering damper and (SCAS) Suzuki Clutch Assist System, which makes downshifts smoother and contributes to a light clutch pull. 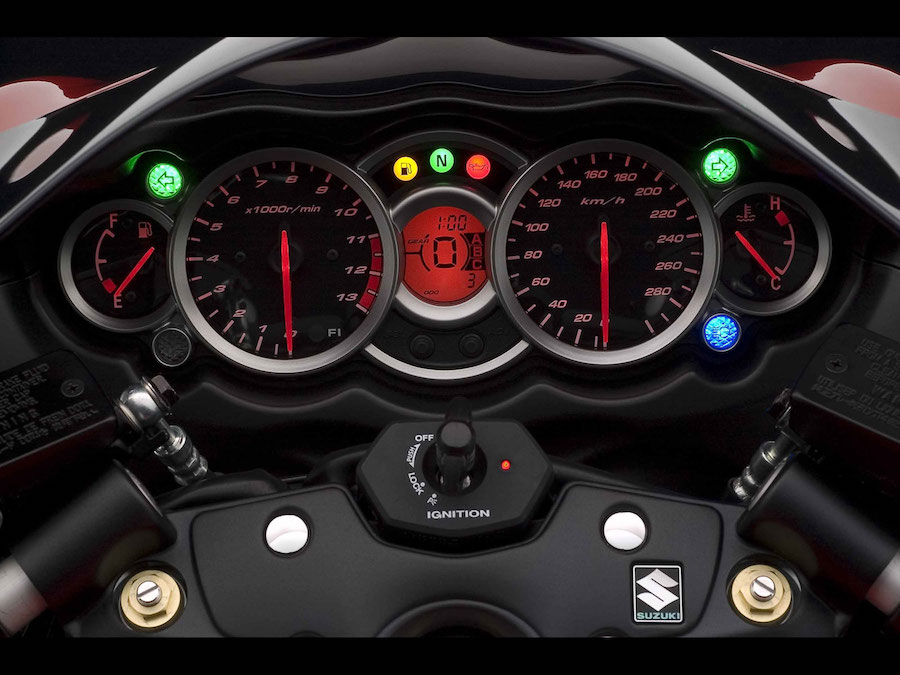 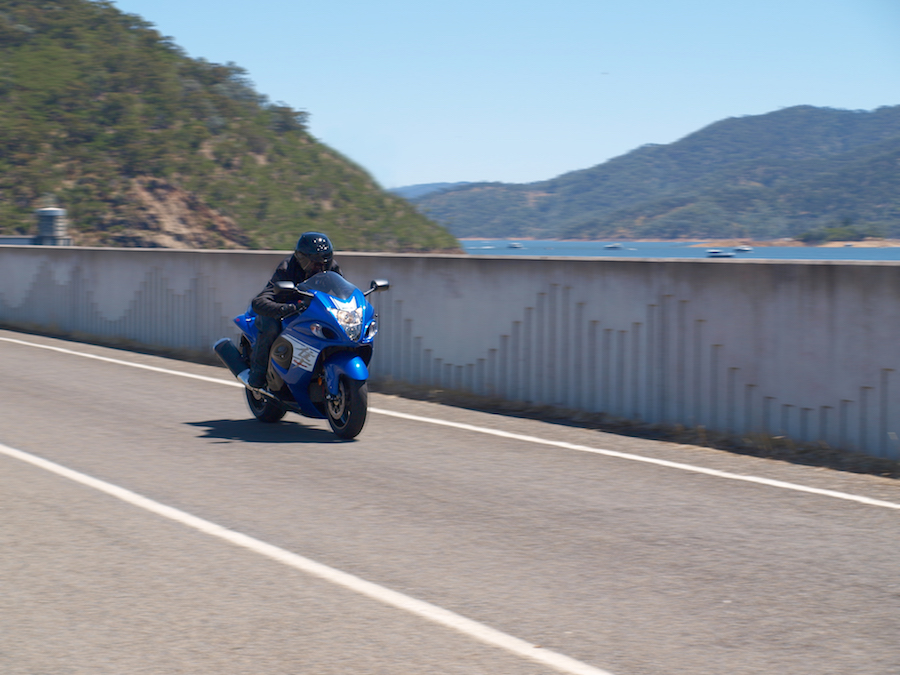 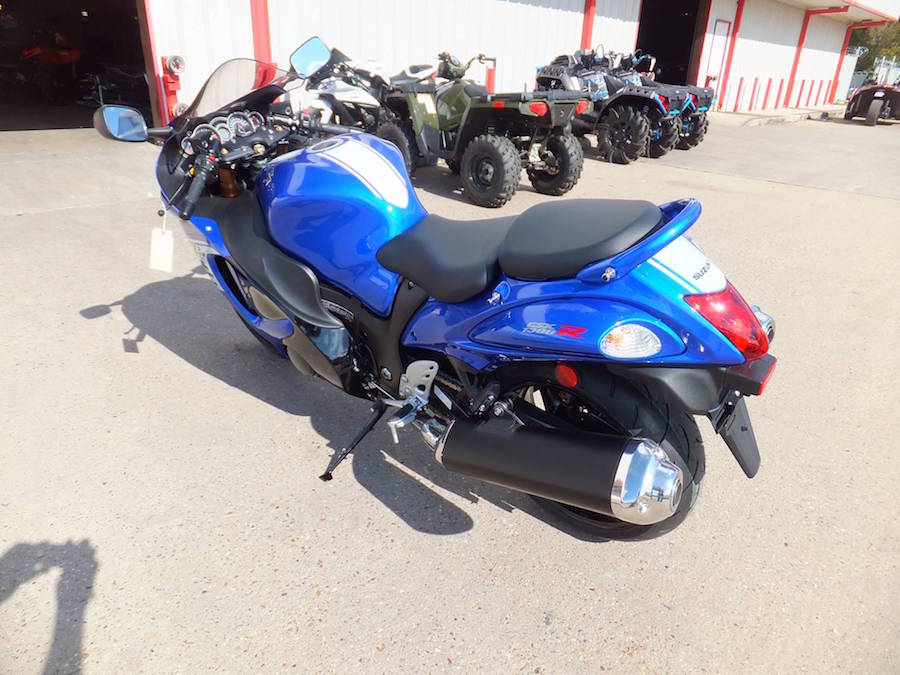 1. Tucked down low on the ’Busa I felt like Maxwell Smart (86) in the ‘cone of silence’2. The dash is minimal but adequate 3. The hump can be replaced with a really decent pillion perch, but breakneck speeds are best left for the drag strip

The six-speed gearbox is silky smooth and has a nice solid feel when you kick through. In fact the whole bike has a nice solid feel to it and provides great feedback from the road through to the clip-ons. The dash is minimalistic but adequate with a taco, speedo, fuel and temperature gauges as well as a digital display providing speed, time and gear positon along with three rider modes that regulate engine output for varying road conditions.

At 266kg, the ’Busa is not a light bike, but I found that its low centre of gravity made it quite manageable at low speeds, backing into curbs or parking, even with the bride on the back. This is the same bride who once said to me “there is no way you are getting me on the back of a sportsbike”. But after seeing the fairly decent pillion perch on the GSX she suddenly changed her tune, and so a lovely day was spent with my little love muffin zipping through the Yarra Valley on a quest to replenish our stock of Victoria’s finest grape juice. Once you get out on the ‘Busa it is easy to keep on going. Just make sure you squeeze every drop into the 21-litre tank because the big girl can be a little thirsty.

One thing’s for sure, the GSX1300R never fails to turn heads. And if someone happens to dis her appearance, my favourite reply is something I picked up from a proud new Hayabusa owner back in the day as he rode out of the showroom: “She might be f****n ugly, but man she goes like shit out of a shanghai”