Can an adventure bike really be utterly competent and retro cool all at once? That’s what we needed to find out

Crossover cars are becoming ever more popular, as passenger car platforms are increasingly used to create a multi-purpose vehicle with the space and practicality of an SUV, but with the comfort and handling of a sedan. Same thing with bikes, the most obvious example being BMW’s succession of best-selling GS models, or Honda’s Africa Twin or CB500X, all attempting to deliver the best of both worlds without one compromising the other.

But now Triumph has delivered a pair of crossover models which seek to answer a different question – how to combine retro cool with modern functionality, in a dual purpose motorcycle. Call it a crossover Crossover. That’s the conundrum Triumph’s chief engineer Stuart Wood and his R&D team faced three-and-a-half years ago when they began work on creating the new-for-2019 Scrambler 1200 duo, in both XC and XE variants. To do so, they took the all-new 1198cc liquid-cooled parallel-twin T120 motor the firm had just launched to power the new generation of larger-capacity Bonneville models. Because rather than concocting a powered-up version of the 900cc Street Scrambler, which just as it says on the label has only minimal off-road pretensions, Wood’s design brief was to develop a pair of adventure bikes with the Bonneville family’s traditional twin-shock neo-classic styling. A pair of adventure bike which were just as adept both on and off-road as the company’s thoroughly modern dual purpose triples. So in this way Triumph is seeking to reinstate the Scrambler nametag, which it first laid claim to years ago, long before BMW or Ducati ever used the name on what amount to very much road-going models. In doing this Triumph has taken another long look in its corporate rearview mirror to launch these Modern Classics as a tribute to one of the most successful models in its classic-era lineup: the go-anywhere Trophy street enduro. Amidst all the furore when Ducati launched its Scrambler sub-brand back in 2014, it was conveniently overlooked that it was actually Triumph which invented the street-legal Scrambler category back in 1949 with the TR5 Trophy, so named after the three Speed Twin-based bikes the British company built for the 1948 International Six Day Trial in Italy, winning three gold medals and the Manufacturers Team trophy in that gruelling event. 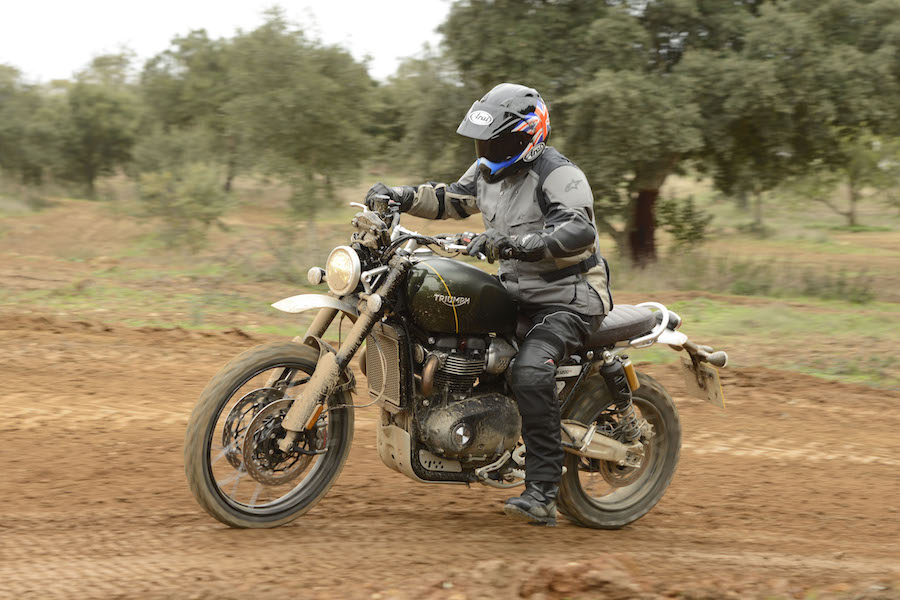 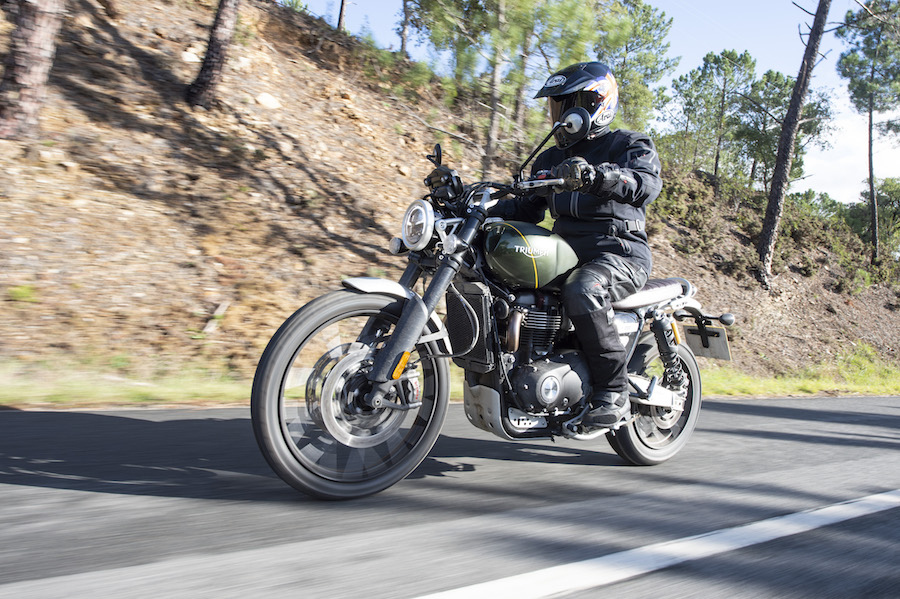 The street-legal spinoffs which followed powered Triumph’s expansion in the USA, where dual-purpose street scramblers became a big deal in the 1960s, with Triumph twins the class kingpins which dominated desert racing and enduro events for the next two decades. Ducati only joined in with the 250 Scrambler single in 1962, a smaller-capacity rip-off of the concept conceived by its US importer Berliner. And BMW never produced a model with off-road capability until the 1980 launch of the R80G/S.

The XC that will be available in Aussie dealerships in April is the everyday tarmac- friendly version of the two, costing $20,300 (plus on-roads), with the more offroad-focused XE retailing at $21,700 and available this month. Both bikes are powered by the same liquid-cooled parallel-twin eight-valve 1198cc Bonneville engine measuring 97.6 x 80 mm, with a 270° crankshaft and chain-driven single overhead cam, which uses race-style finger cam followers rather than traditional bucket and shim valve-gear.

But rather than detune performance of these dual-purpose models to the level of the T120 Bonneville by using this engine in that model’s High Torque guise, Wood decided to employ the more powerful High Power variant fitted to the Thruxton – and then enhance it considerably for dual-purpose use.

“We’ve done quite a lot of work on reducing both mass and inertia in the HP engine,” he says.

“The mass reduction comes from a lightweight magnesium cam cover, plus a mass optimised clutch cover, which we’ve completely redesigned internally to get the wall thicknesses thinner, and the shafts that the balance shafts run on have also been reduced in mass. And we also lightened the rotating parts, including the alternator and the crankshaft.

“We removed about a kilo of weight from that by making the crank webs a larger diameter, but narrower, so we get the balance effect, but have the reduced overall mass at a larger radius. This gives a lower rotating weight, and a reduced rotating mass, so the engine revs quicker.”

So the HP Bonneville 1200 engine in dedicated Scrambler tune running the same 11:1 compression ratio as in its Thruxton format, now delivers 67.2kW (88.7hp) at 7400 rpm, which is 12.5 percent more power than the T120 and 38 percent more than the 900cc Street Scrambler, albeit seven percent less than the 72kW (96hp) Thruxton.

But Wood & Co. have delivered the best of both worlds by massaging the engine’s torque delivery to peak at 110Nm at a low 3950 rpm, less than halfway to the revlimiter. That’s just 2Nm less than the Thruxton, but with a much wider spread of grunt throughout the rev range, and it’s also four percent more than the T120 so-called High Torque motor delivers, and 37.5 percent greater than the smaller-capacity Street Scrambler.

Read the full review in AMCN Magazine Vol 68 No 15 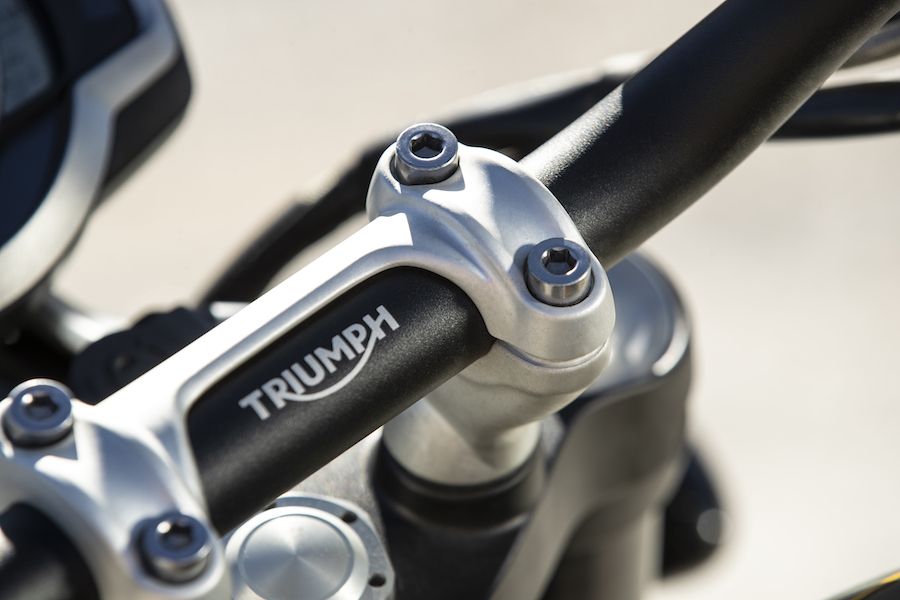 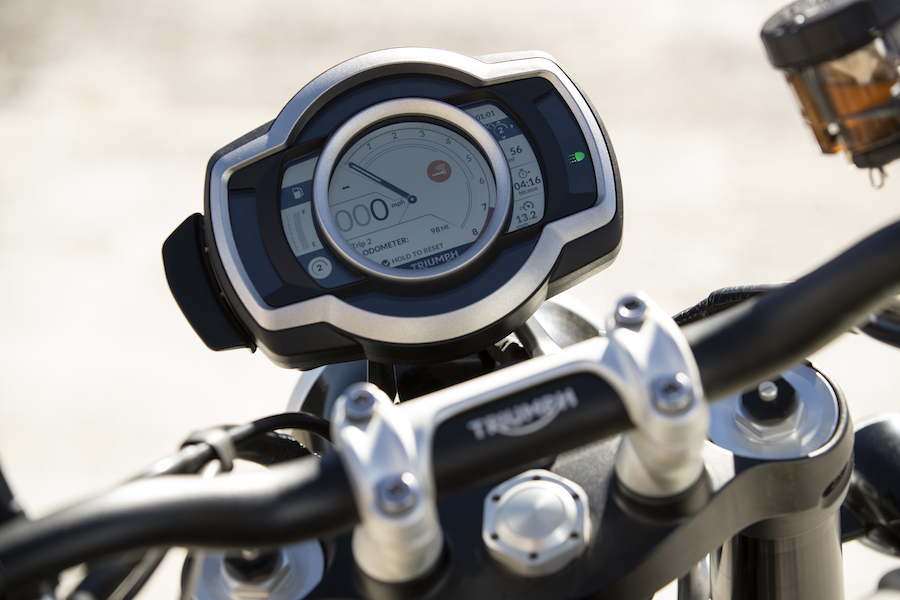 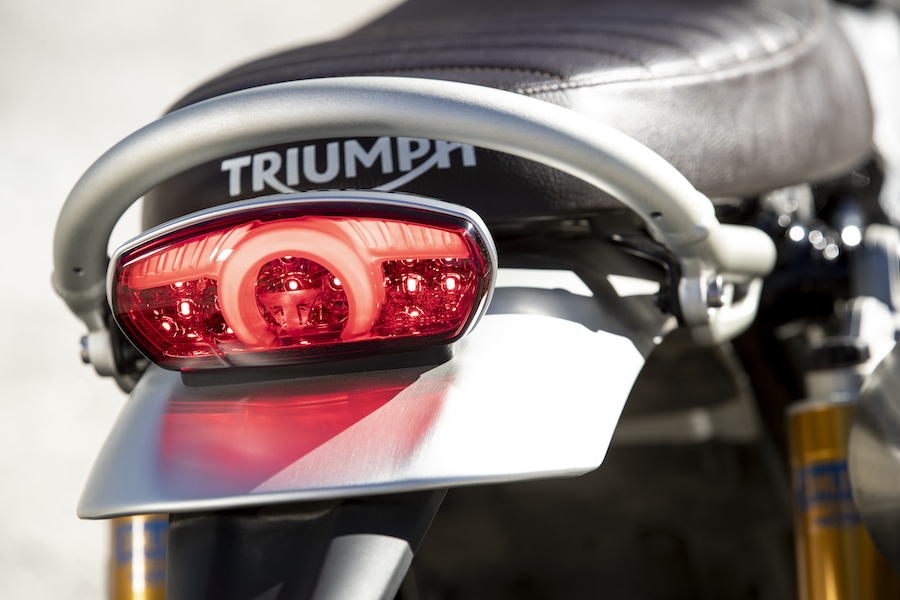 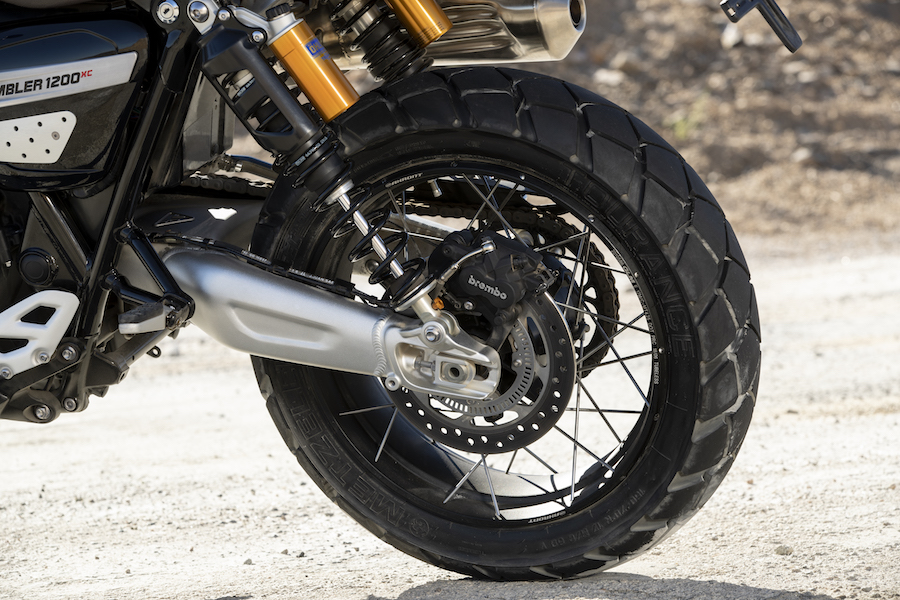 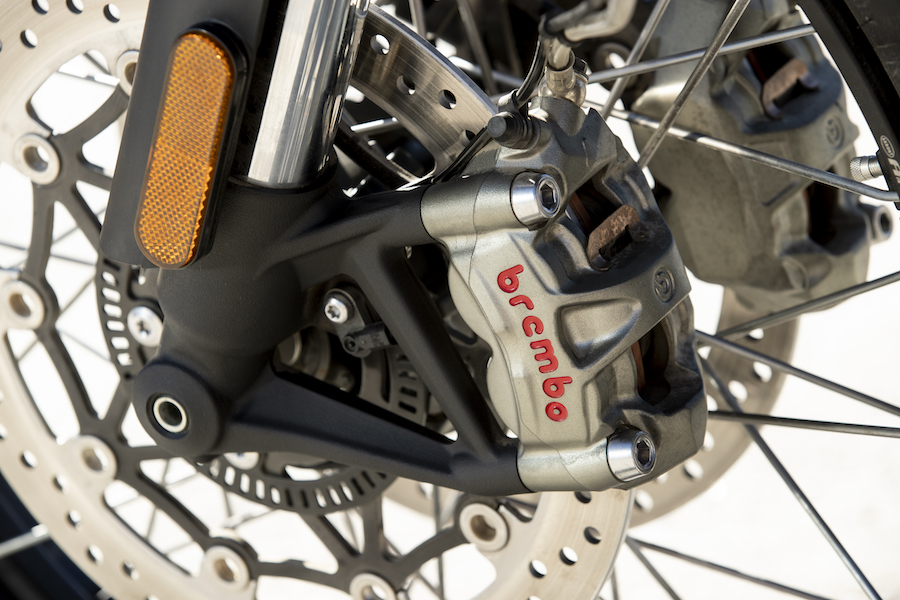 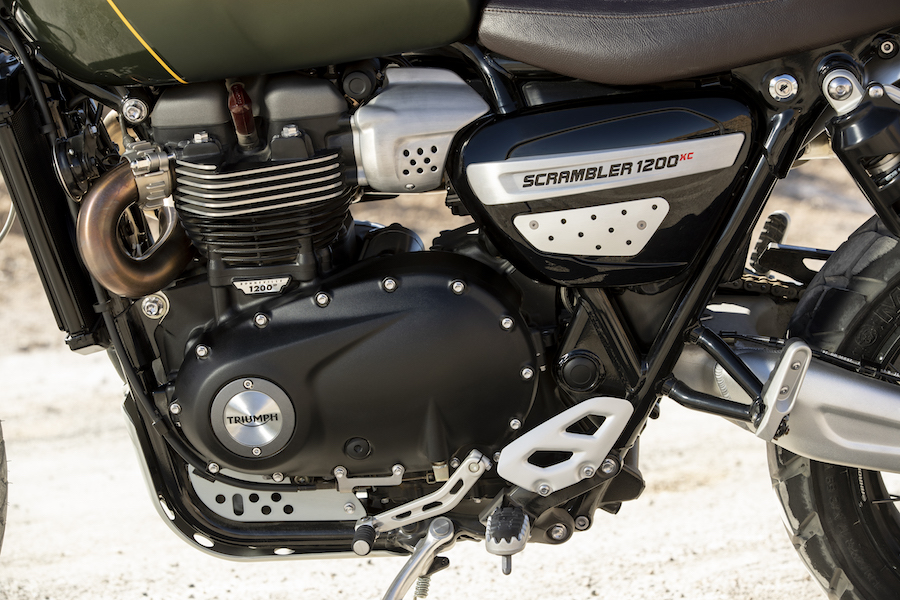 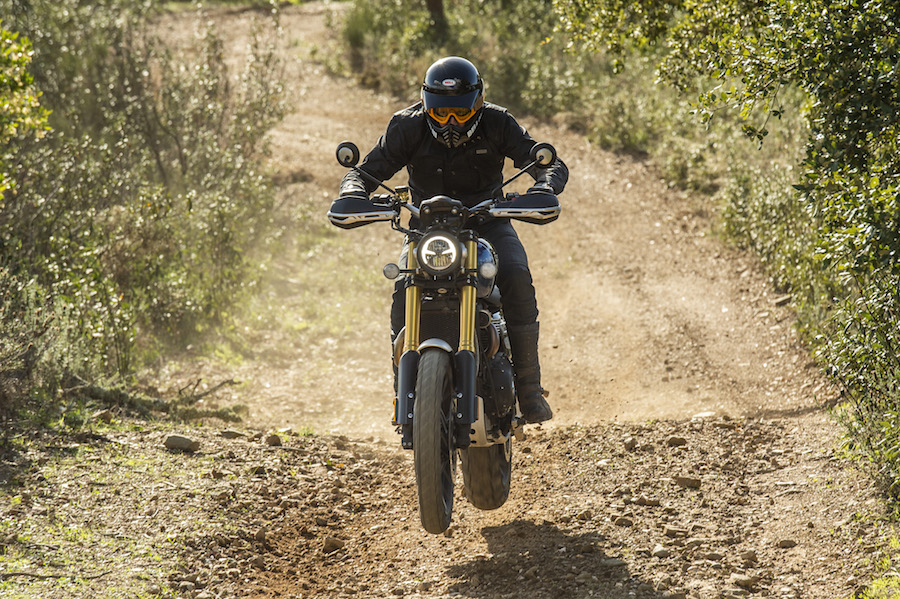 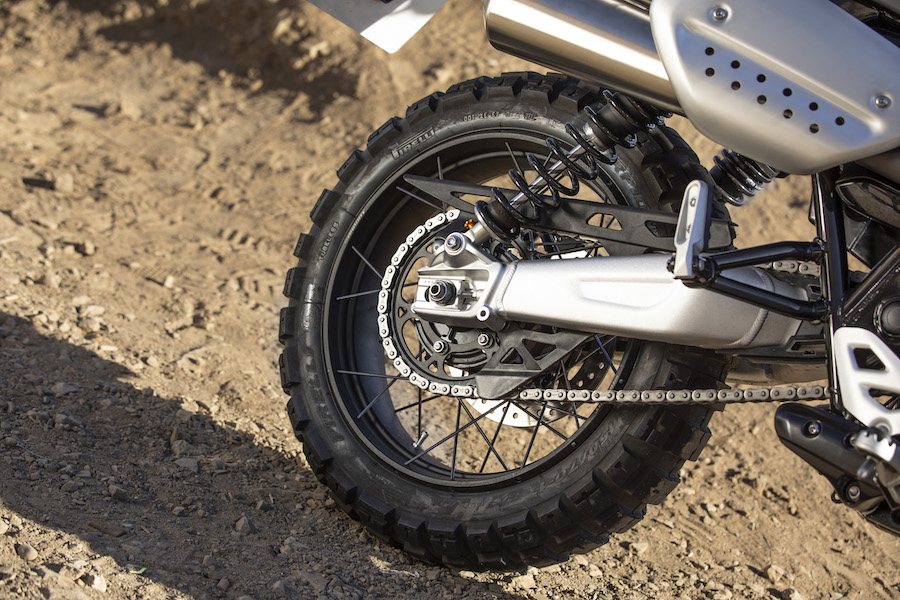 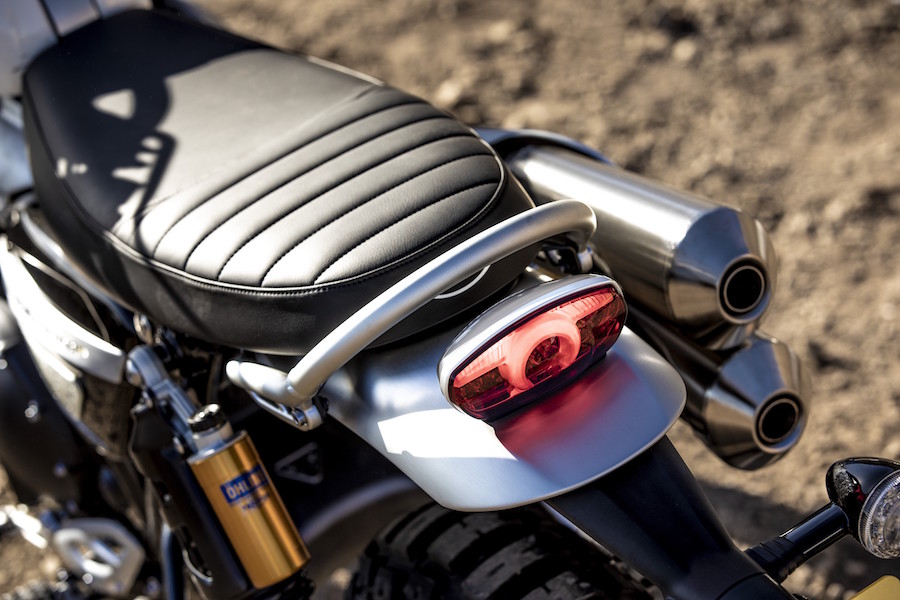 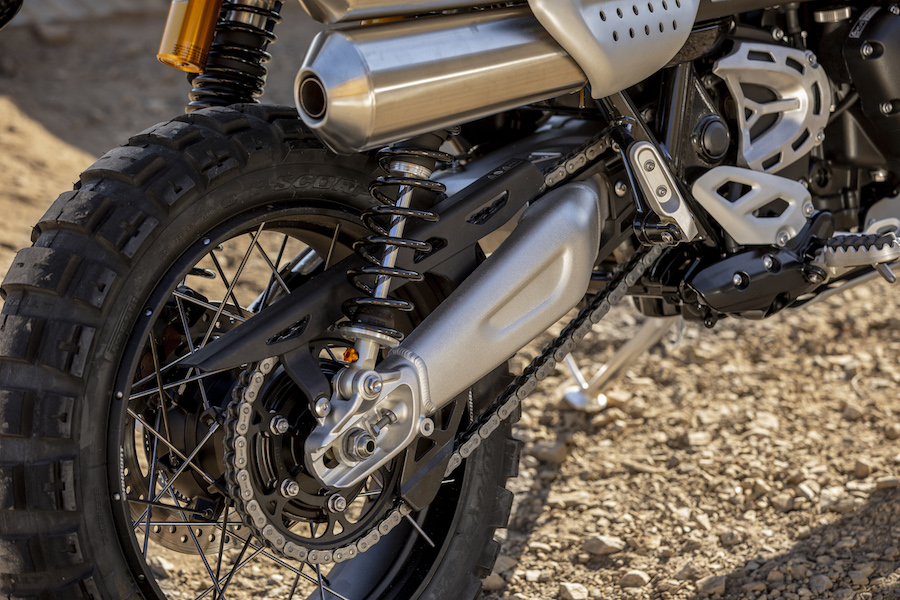 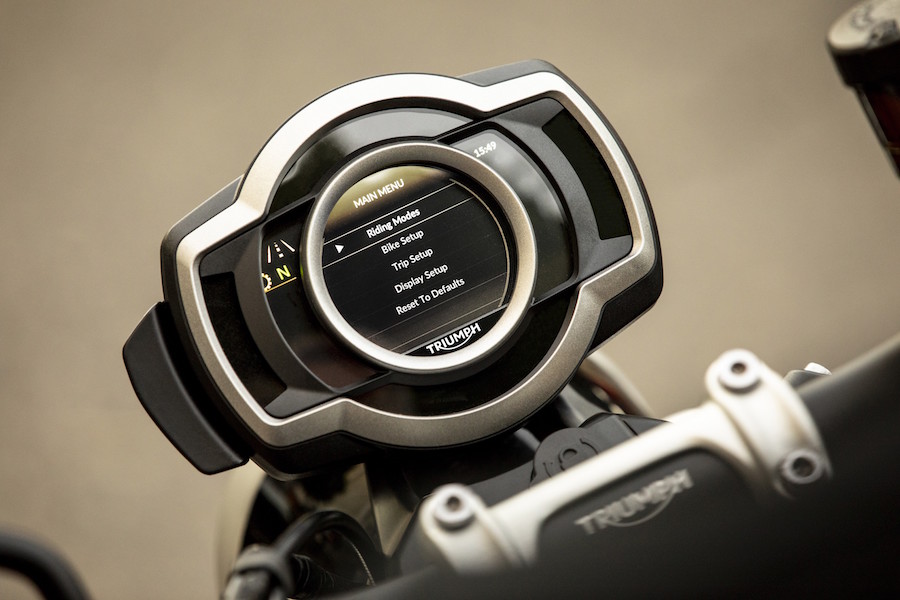 Read the full review in AMCN Magazine Vol 68 No 15