Until we recently, the British power cruiser looked doomed. Discontinued in Europe thanks to emissions limits and little-changed since its 2004 introduction, the giant cruiser didn’t seem to fit the company’s new focus on parallel twins.

But the Rocket is making a comeback as the Rocket 3 TFC. The switch from Roman to Arabic numerals and the addition of that ‘TCF’ tag underlines that this is a completely new design.

‘TFC’ stands for Triumph Factory Custom, a new initiative similar to Harley-Davidson’s CVO range. Triumph TFC models will be high-end, much-modified versions of its mainstream production bikes, made in strictly limited numbers. It says it won’t make more than 750 of any TFC-branded bike. The centrepiece of this model remains its enormous DOHC triple. The original Rocket boasted having the biggest mass-produced motorcycle engine in history, at 2294cc. Triumph says the new version will also be bigger than anything else in production so we expect it could be 2600cc. With Ducati’s 120kW Diavel setting new performance standards for muscle-cruisers, Triumph has a benchmark to aim for. In terms of torque, the huge triple is unlikely to have many rivals. The original made 221Nm, and the new one should have even more.

The old Rocket III’s weight problem is addressed with an aluminium frame replacing steel and with far sportier steering geometry. A single-sided, monoshock swingarm replaces the old twin-shock layout, matched  by a massive USD front fork. Radial Brembo brakes and a titanium Arrow exhaust with three carbon fibre tailpipes are hints at Triumph’s attempt to make this a sporty  Rocket.

There’s a full complement of LED lighting plus an all-in-one, multifunction display. We’ll have to wait until May for official tech details, but expect cornering ABS and traction control, multiple riding modes, Bluetooth integration, cruise control and a host of other technologies.

The new Rocket will inevitably spawn a range of lower-spec variants, no doubt including touring-oriented and cruiser-style versions as well as the muscular shape seen here. Our spy shots showed a mass-production prototype. A TFC version of the 1200cc Bonneville twin gets a 7kW boost to 79kW. This is achieved with a lighter crank and balancer shafts, higher compression pistons, revised ports and a new cam profile, plus a titanium Vance & Hines exhaust and revised engine mapping.

A high-class Öhlins NIX30 fork replaces the Showas of the normal Thruxton R with matching Ohlins RSU rear shocks, Brembo Monobloc calipers and a radial Brembo master cylinder. The all-carbon bodywork helps saves 5kg in weight, so expect it to be 201kg dry.

A long list of special cosmetic parts confirms this is a special model. A machined billet top yoke has a numbered plaque while there is a brushed alloy Monza filler cap and nickel-finished mirror centres and gold tank badges.

Australian prices haven’t been announced but Triumph UK are taking orders at $A31,800. 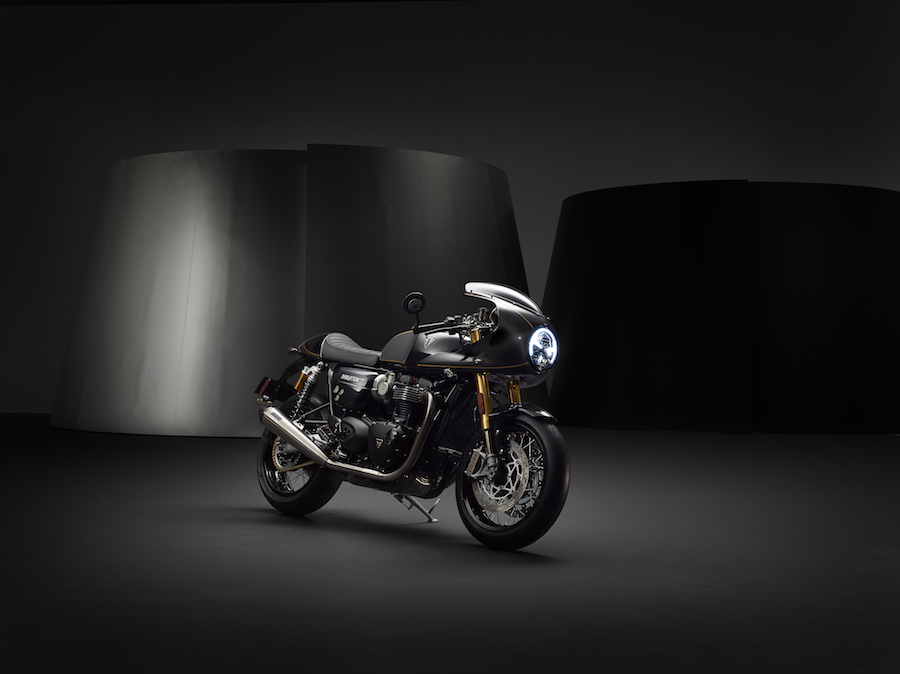 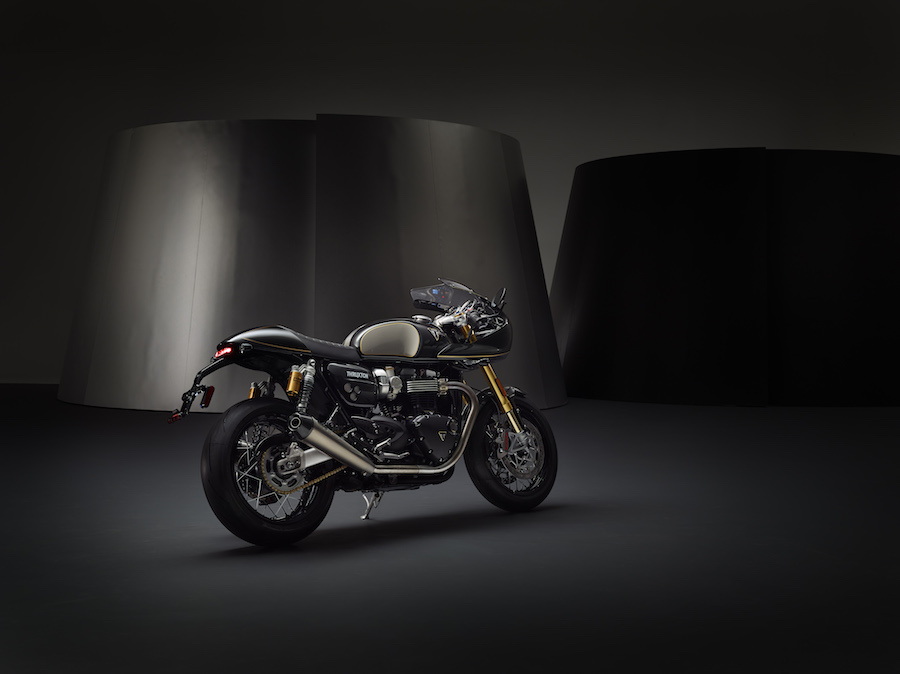