You will love the Street Triple RS – we did. It was enlightening to see each individual’s reactions as they got more familiar with it.

It top scored for both confidence to push it and our regardless-of-price opinions. It’s a real gem of a motorcycle, probably because it’s both a genuine all-rounder and a top-shelf factory special.

“Whether you’re a newbie who has just stepped up from a restricted licence, or a highly experienced rider, the Street Triple delivers a sense of confidence like no other bike on the test,” Chris said. “The electronics interface is easy to use, and that engine is an absolute cracker.” Yes, the engine. The upsized 765cc unit only adds more to what was already an exquisite mid-size performer. We don’t need to say any more about this, and besides, there’s so much more to the RS. The Street Triple chassis alone is a great thing.

“This bike starts with intelligent design from the ground up – the geometry is well honed,” Matt said. Then Triumph has added superior suspension and other components to bring this to RS specification, and every bit adds something worthwhile. This goes all the way to the sexy levers. The outcome is complete.

“The power/suspension/chassis combination gave me the confidence to push the Triumph more and more,” Lance said. “It was instantly comfortable for my height and weight and the power was delivered in a way that didn’t get the bike all out of shape, regardless of the road surface or profile. I never felt like the Triumph was getting away from me.”

The little Trumpy seemed to fit everyone, too, which is quite an achievement. 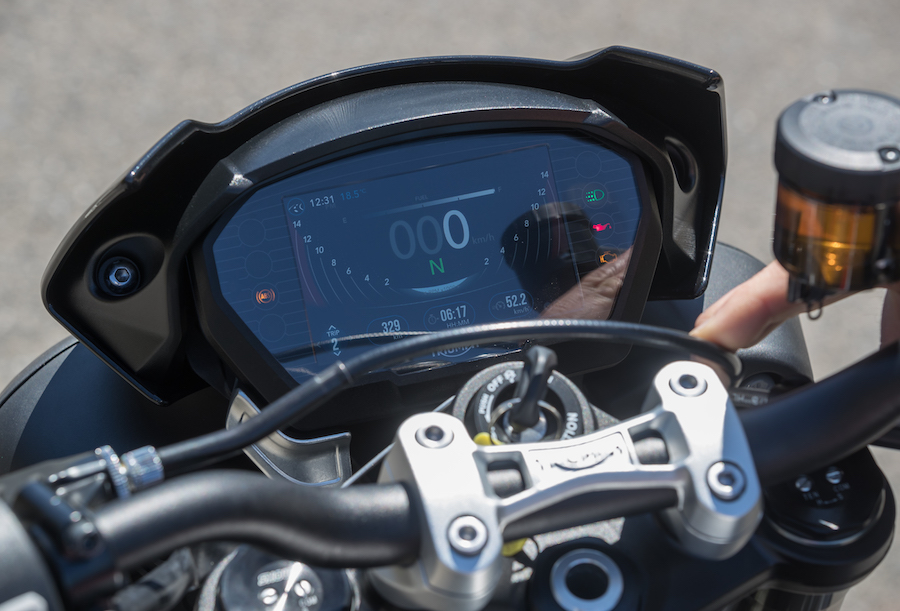 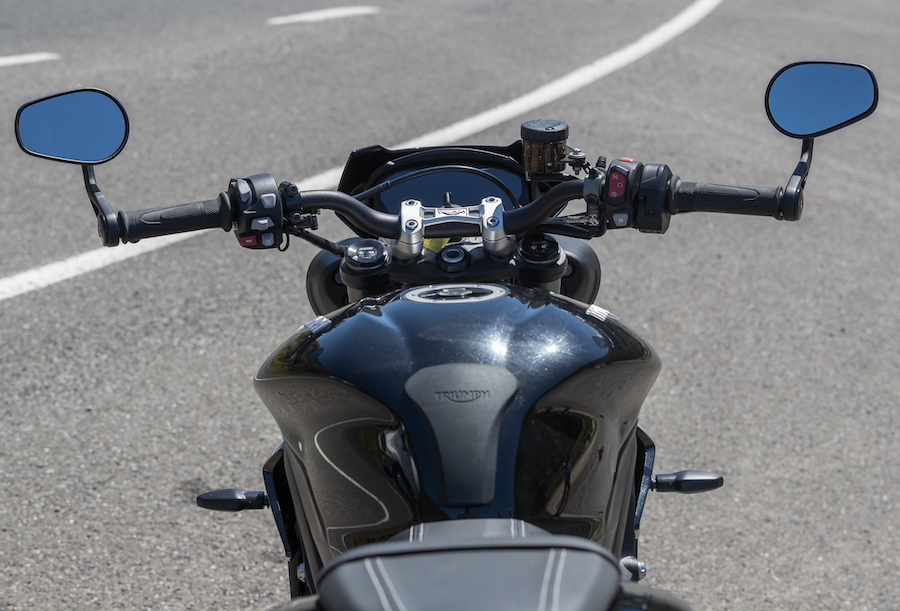 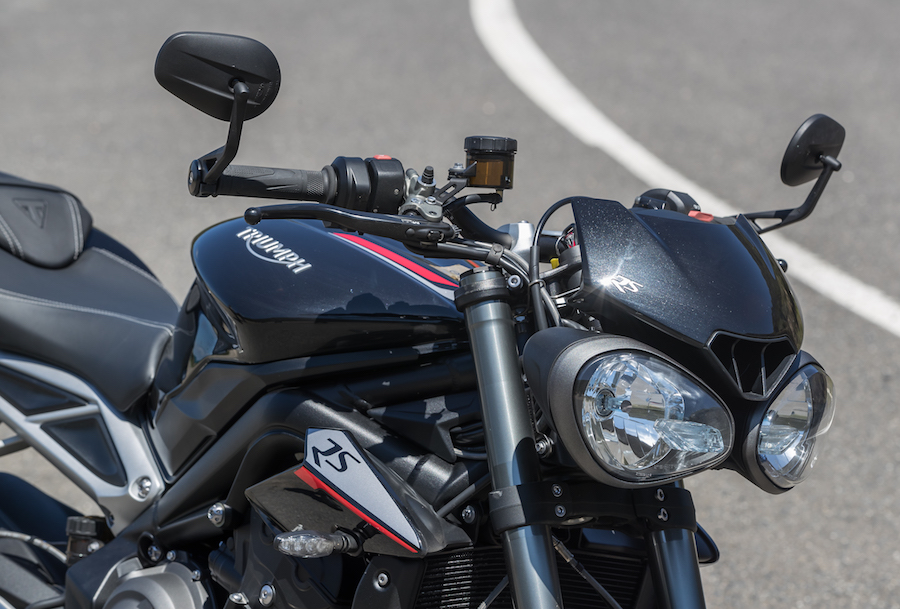 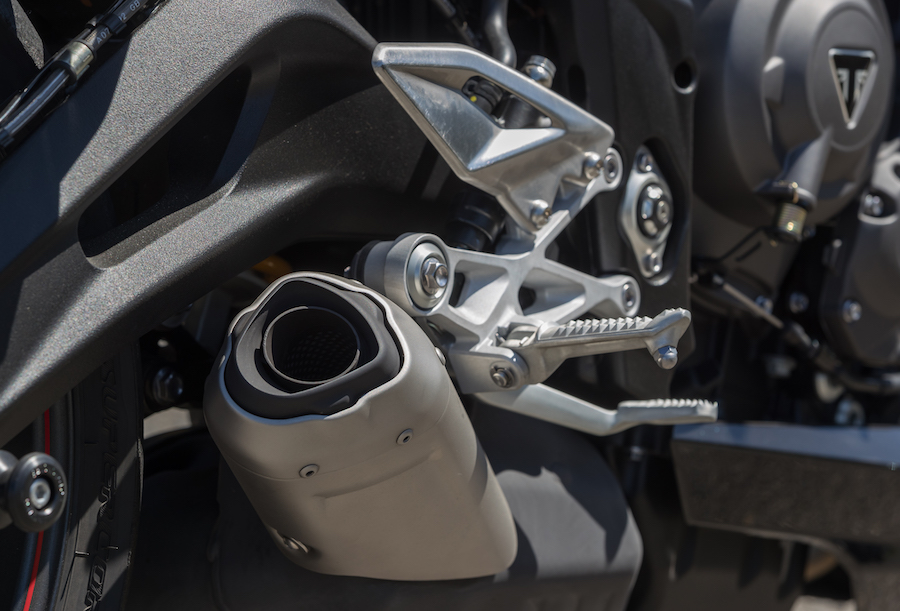 Its electronics are on a par with bikes that cost upwards of 20 and even 30 thousand dollars, and you get a very trick TFT colour dash that includes six different styles of display – possibly a bit gimmicky, but it scored points. Vitally, the set of physical controls and digital menus Triumph has installed create a refreshingly intuitive system that takes no time to work out and is quick to use.

“The ease with which a rider can navigate the electronics is a lesson to other manufacturers,” Chris said.

This and the depth of electronics, as well as the use of high-end suspension, all boosted the Street Triple RS’s score for technology.

The Triumph is so well executed that it’s a bit of a giant killer. It responds like the small, nimble bike it is, but the power delivery could be from a larger bike and it covers ground at a rate not suggested by the simple specs. For this reason perhaps, the top-of-the-range RS managed to score well in value for money despite having one of the highest price tags in its market segment. If you look at the price alone, you might baulk; if you look at what other $18K bikes bring, you begin to see the Street Triple’s true worth. What an absolute delight! The Street Triple RS is the epitome of two-wheeled joy.

Triumph has given it a wicked engine that’s not only rev-happy and free-spinning at the top end, but has decent grunt at lower revs. And we all know how cool the three-cylinder format is. The combination of tiny chassis and potent engine is exhilarating.

The electronics are effective and variable, with a simple system for switching modes and adjusting characteristics. The quickshifter is cool, too, although it only works going up the gears.

Is there anything else out there that delivers this much bang, bling and brilliance for $17,550 (+ ORC)?

You get a lot of motorcycle for your money at around 18K: Öhlins, QS, ABS, selection of modes, Brembo brakes… I especially like the dash layout – clever and easy to use. Typical torque of a three-cylinder triple. Not much left
to do except ride it! The 2017 AMCN Motorcycle Of The Year Winner!

The Triumph Street Triple RS is a sensational machine and deserving winner of the 2017 Motorcycle of the Year award. On every voting criterion, the Triumph scored very well.

The RS gave us so much confidence that it top scored on that one. It’s so easy to ride well. The engine, chassis, suspension, tyres, electronics and ergonomics are all great, and those factors all work in unison. We can’t overstate how well Triumph has achieved this.

It scored second for its technology, with additional kudos for showing everyone how the interface between rider and bike should be.

Ignoring the murky waters of price affecting judgment, the Triumph came out on top. As a bike, not a value proposition, it was the favourite among a varied group of testers. This is a bike for all sorts of riders. When we brought money back into the scoring, the Triumph still garnered enough votes to run second. Ditto when we each unilaterally voted on our choices for MoTY.

Like a true champion, the Street Triple RS racked up consistently high scores to win overall. The KTM was very close behind, winning on the technology front with a suite of electronic aids that are both understandable and incredibly beneficial. Indeed, without them it’d probably struggle to realise its wide-ranging capabilities. As individuals, more of us thought it might win the crown, and it was popular beyond our expectations when value wasn’t factored in. Even on value, this top-dollar bike was rated third.

Third place goes to the Ducati SuperSport, another popular bike with our testers. Interestingly, disregarding price, it scored equal with the R6, hinting that gentlemanly performance is as desirable as uninhibited raciness.

That the Yamaha was not higher in the scoring is a reflection of the standards set by the other bikes, because it absolutely creams its design brief and got a lot of recognition for it. The higher-scoring bikes edged it aside for technology and value. Its status as a pure sportsbike also brought it lower as a potential MoTY champ because of the more limited appeal today.

The baby BMW got top marks on value for money, something that will no doubt see it a sales success. There’s not much to this bike, but the execution is superb and the price is well worth paying. That’s especially so considering how confidently the G310R handles the road. This motorcycle stands out in its market. 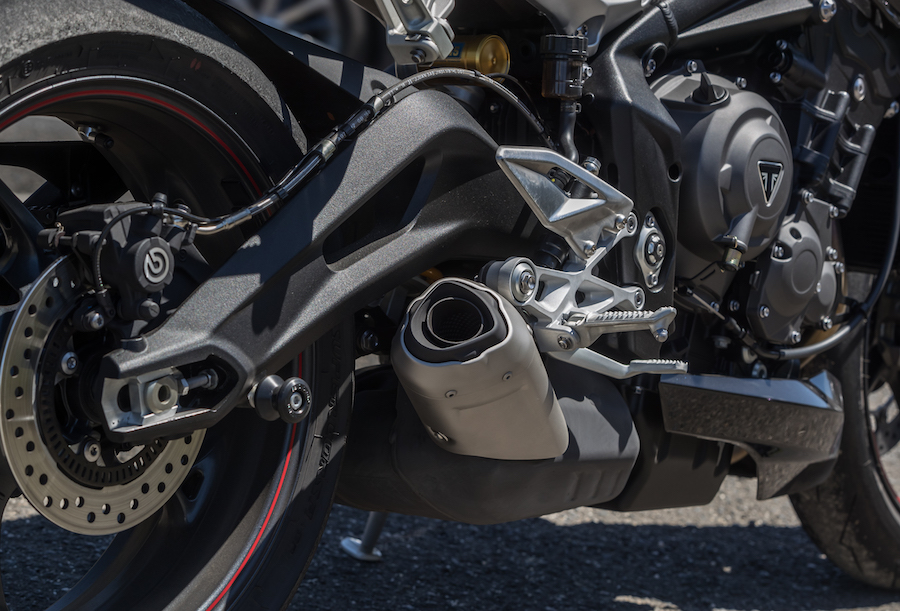 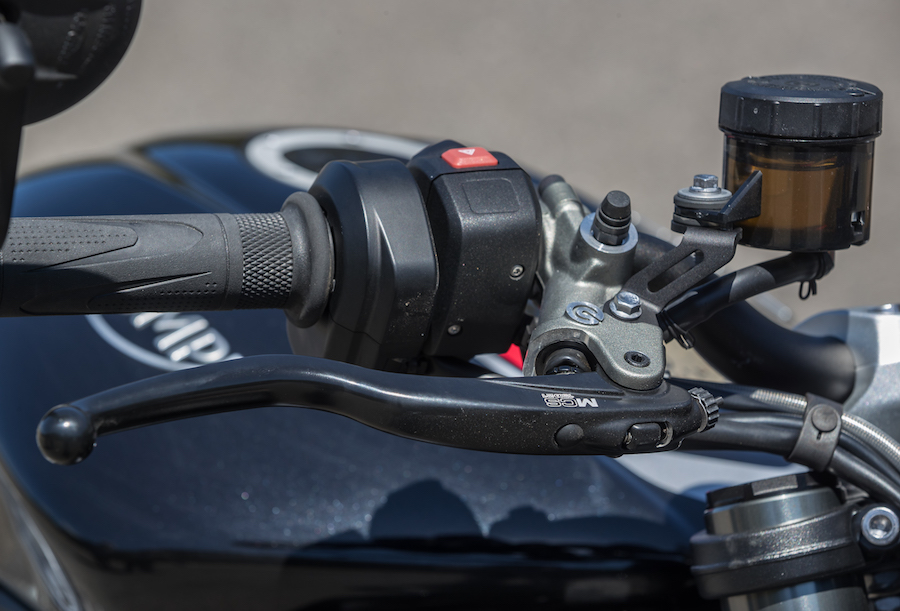 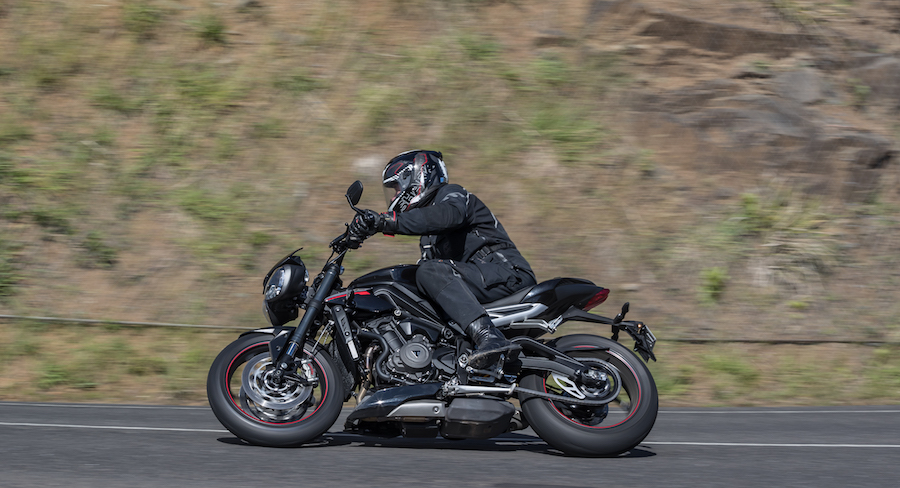 Like the R6, the GSX-R1000R’s narrow design brief was its downfall in the scoring, but even more so for the high-powered superbike. An otherwise outstanding machine, which scored third for its use of technology, it might have done better if it’d been more relevant to road-riding in this day and age.

Perhaps that’s where the Harley-Davidson Street Rod might have stood out, but alas, it didn’t. The Street Rod scored consistently, but there were no peaks, and its compromises are its Achilles heel. A Harley will always score high in the popularity stakes, and it deserved its place in the top eight of 2017.