One of Suzuki’s most dependable and fun-loving bikes turns ten this year, and what better birthday bling to give than the gift of gold?

In the often ill-defined world of Super Motard, the Suzuki DR-Z400SM stands out as the longest-running example with true dirt bike credentials, having been in production and virtually unchanged since 2005. But, that’s still nowhere near as long as the DR-Z400E trail bike from which the SM model is derived has been around. Suzuki’s trusty battle-axe of the bush has been in service since 1999, and is also still in production much as it was originally designed.

Shiny gold wheel rims may not seem like much of an anniversary update for the SM, but rather than the DR-Z400 models’ age being a negative, I can only see positives. For starters, this is not a race bike in either its motard or off-road form, they are bikes for simple reliable riding enjoyment, so there just are no Jones’s to be keeping up with technology-wise. Secondly, you are getting not only a bike which has returned the full amount of its original development costs so long ago that the SM retails for $100 less than when released 10 years ago – $2000 cheaper than 16 years ago in the case of the DR-Z400E – you are also getting a bullet-proof bike with 16 years of servicing and repair information on file and an abundance of low-cost parts available. Learner legal LAMS approval and relatively cheap and easy maintenance are two more strings to the DR-Z400’s bow. It’s one of those bikes that makes you realise LAMS legality, and fun and frisky, aren’t mutually exclusive – the SM loves a stunt or two, and will drift just as a good dirt bike should given the right conditions. Not antics I’d recommend for riders planning on attaching a L-plate to the SM, but as this is a bike you could happily grow old with, perhaps something to enjoy in the future. The SM would even be right at home flying on the occasional track day, ideally at one of our more technical race circuits.

In terms of suspension quality and adjustability, there aren’t many road bikes at this price that can match the Showa forks and shock on the SM. This is simply a consequence of being fitted with off-road suspension originally developed for Suzuki’s competition motocross bikes. Although the technology isn’t the same as on very latest RM-Z range, it is still a high standard compared to most entry-level road bikes, and shows this by keeping the SM admirably composed no matter how ugly the road conditions get.

The SM has a relatively slack head angle compared to an equivalent supersport or naked roadster, which a characteristic carried over from the dirt, and this is the area where it could potentially be improved on most. Turn in isn’t as sharp as you would expect from a road-bred sportsbike, but the leverage offered by the 870mm wide handlebar and open riding position goes a long way to countering this initial resistance to direction changes.

Where the Super Motard machine differs most from the off-road version is in its wheels, tyres and brakes. The 21-inch front, and narrow 18-inch rear rims are replaced by the wider 17-inch hoops, then fitted with sticky Dunlop Sportmax D208 radials with tubes used for inflation due to the non-tubeless spoked wheels. 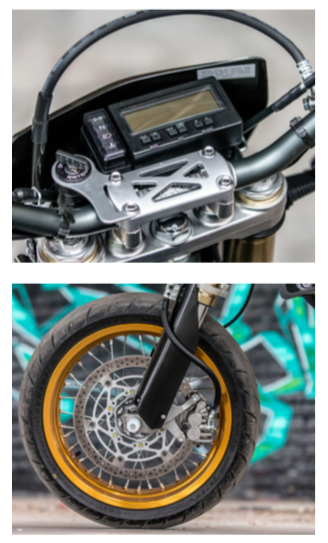 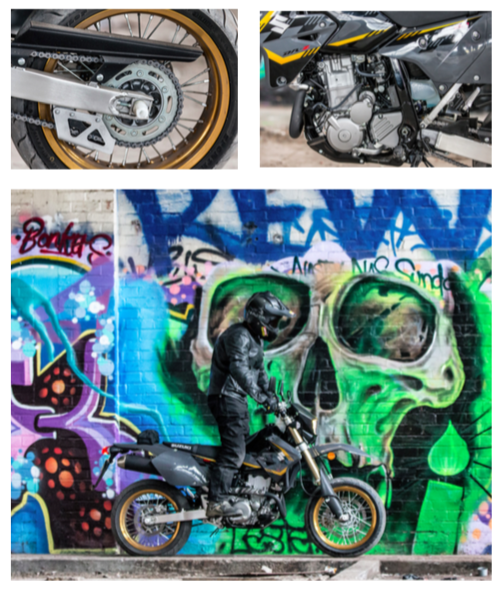 Although the brake calipers are the same ones employed for dirt duties, the SM’s front disc has been super-sized to 310mm, up from 250mm on the trail bike, and the rear disc also gets a healthy 20mm boost in diameter to 240mm. Braking bite certainly isn’t as strong as a twin disc and/or four piston caliper set up on the front, which is what I’d love to see on this bike, but it still gets the job done, and with good feel and plenty of modulation. ‘What is modulation?’ you ask. Well that’s the stuff that counted before ABS was invented. It helped you safely learn the skills of actually controlling a motorcycle by yourself. The SM is excellent for developing those old-school skills, without the nannying which we are increasingly not given a choice over these days. Some ABS systems are now genuinely brilliant, but the day that a World Championship Motocross Grand Prix, or the Dakar Rally, is won on a bike fitted with ABS, will be the day I’m 100% convinced it’s better for everyone, and no sooner.

At the heart of the SM is a 398cc liquid-cooled single-cylinder four-stroke engine, with four-valves, digitally mapped CDI ignition, and a 36mm Mikuni carburettor. ‘What’s a carburettor?’ you say. It’s fuel metering devise for internal combustion engines, like the one your dad used have on his first bike. They work remarkably well for such antiquated apparatus, and when riding the DR-Z 400SM I doubt you’ll even realise your right fist actually has full control of the throttle valve, just like in the good old days.

Feeling a lot livelier than most LAMS legal bikes due its relatively light weight of 146kg fully fuelled, the SM makes the most of its trail-bred engine’s strengths. Despite its bore and stroke being fashionably over-square, it’s not a revver. The single-cylinders’ torque is the over-bearing influence on its character, and pulls the SM clean and calmly from idle, all the way over the wide usable rpm range to its limit just shy of five figures. The long narrow seat of a dirt bike takes some getting used to if you are conditioned to the short wide saddles found on most modern road bikes, but the SM’s perch is towards the soft and broad end of the off-road spectrum, so does offer reasonable comfort. Having the room to move and to shift your body weight around the bike is where the pay-off is, and adds to the superior bike control which is the hall-mark of the motard style.

This type of bike certainly won’t be for everyone, but if you have an open mind and a thirst for fun, Suzuki’s DR-Z400SM will serve you up some gold-standard good times.

If the DR-Z400 Super Motard has captured your interest, and you fancy seeing what this type of bike is capable of in the hands of the pros, why not check out some Supermoto racing? It’s one of the most entertaining displays of two-wheeled talents you will ever witness, and we have two top level events featuring expert international riders being held in Australia over the next three months. Road registrable production models built in the Super-motard style, or Supermoto as it’s more commonly called nowadays, have been around since the early nineties when ’Motard first became a big thing internationally. Although this hybrid form of racing on circuits constructed with both dirt and bitumen sections had its origins a decade earlier, it took a while for manufacturers to cotton on to the idea of fitting dirt bikes with sportsbike wheels and sticky tyres for riding on public roads. When they did though, the concept grew a legion of enthusiastic and often stunt-loving fans, and sprouted ’Motard offerings from many manufacturers around the world.

Although some of the pastel coloured European motard models of the early nineties are looking more than a touch dated now, the general concept of a dirt bike fitted with road tyres making a great street bike is as true as it is timeless. With the exception of their big wide motocross style ’bars not being the best choice for scything through narrow gaps in traffic, dirt bike ergos work well on the bitumised battlefields of the suburbs. The emphasis with any dirt bike cockpit and chassis is on giving the rider vantage over the surrounding terrain, and maximum control in challenging situations. Both of these are potentially life-saving attributes in the car-eat-bike world of the concrete jungle.