Even before I’d piled a mountain of gear on it and rode it to the campground of this year’s Australian MotoGP, people were crossing the street or stopping their cars to reminisce with me about a simpler, happier time spent riding bikes as a kid. With a sparkle in their eye, I’d be regaled with tales of siblings and backyards and hot summers and homemade jumps.

I’d not long picked up Honda’s new Monkey 125, a bike I have been very much looking forward to since Honda first showed it as a concept machine 12 months ago at the EICMA show in Milan. Because, like those people who were drawn to the latest iteration of Honda’s iconic model, its forebears were also my introduction to motorcycling; those trademark balloon tyres and thick, plush square seat triggers all the memories and emotions of falling in love with motorbikes.

Honda’s long standing range of Z50s spanned demographics as well as decades – in those days, you didn’t need to be from a biking family to have found yourself atop of a three-speed centrifugal clutch twist-and-go Z50. Popular and prolific, they became a truly iconic piece of popular culture all over the world. 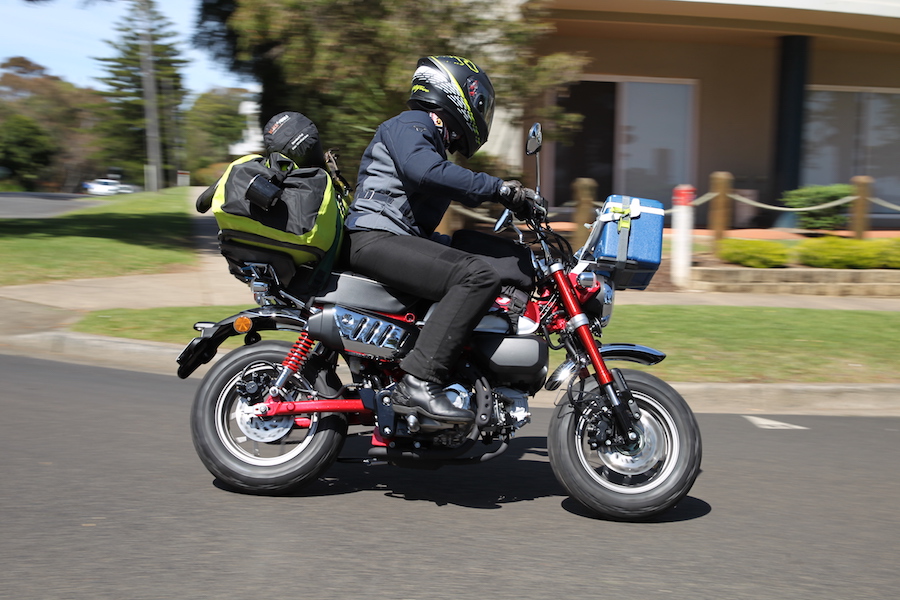 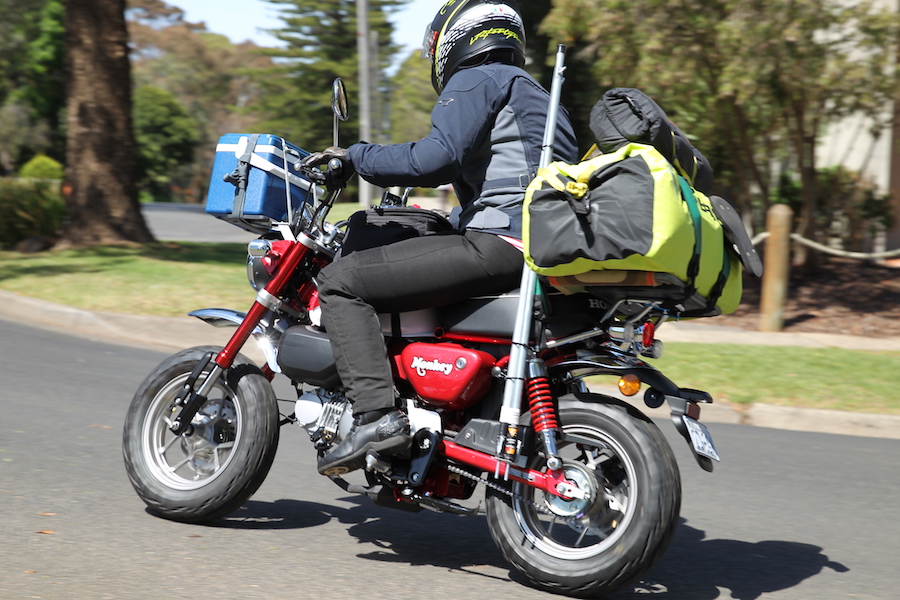 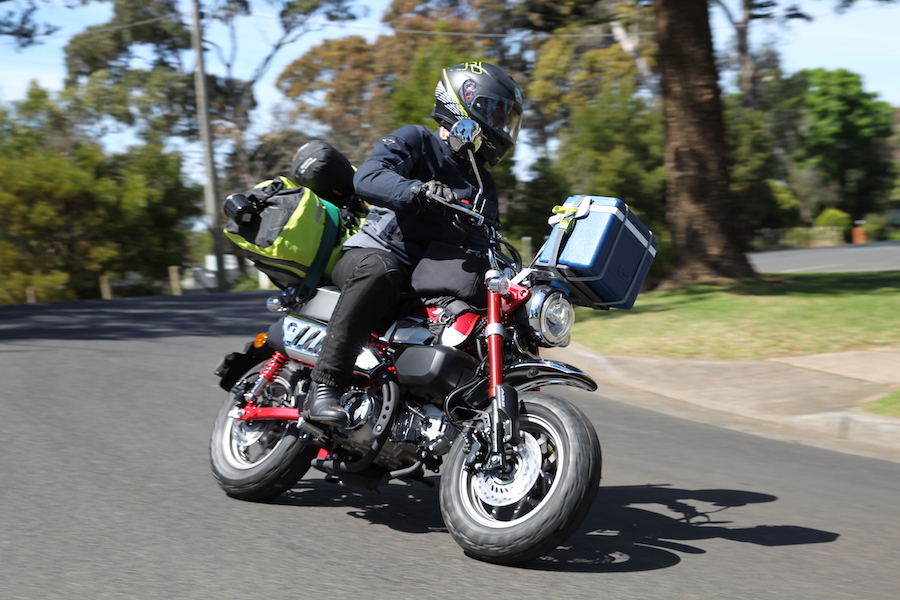 So now, in a time when Katanas and Z900s are tugging at the purist’s heart strings, Honda whips out masterstroke and reimagines a machine that makes even the most mundane and mainstream non-riders beam with nostalgia – it’s genius.

And so too, is the execution. Because while it might look every bit the minibike which taught a lot of to ride, it’s actually a rather well-equipped piece of kit that can comfortably and willingly accomodate fully grown men and women. In fact, just how ‘big’ it is was the very thing which surprised many onlookers, me included.

Fifteen years ago I added an early-80s Z50 to my garage, and with the imminent arrival of the 2018-model Monkey, I’ve spent the last couple of months tarting it up. It, too, was designed to comfortably and willingly accomodate fully grown adults, admittedly some more comfortably than others, but it wasn’t until I had both machines next to one another that I realised just how, well, big, the current Monkey really is.

Based on the same platform as Honda’s recent and popular Grom, the Monkey uses the same fuel-injected two-valve overhead cam 124.9cc engine that powers it (and many, many more models over the past many decades albeit without the fuel-injected bit), bolted within the same tubular-steel backbone chassis. Where the Grom employs a monoshock and box-section swingarm, the Monkey opts for a convincingly retro dual shock set-up and tubular swingarm, while chrome or at least metal componentry replaces nearly all of the Grom’s modern plastic bodywork. They share the same 12-inch cast aluminium wheels, Nissin hydraulic disc brakes at either end and the same 31mm non-adjustable front fork. And while the Monkey is the platform’s so-called retro version, it cops a trick LCD dash, a fob-operated alarm system, full LED lighting all round and – wait for it – an IMU-controlled single-channel ABS system.

It’s that last bit that left many shaking their head at the reach even the very latest technology has gained in recent years. Two years ago when the Grom lobbed on Aussie shores, a rudimentary ABS system wasn’t deemed necessary. But in 2018, ABS complete with an Inertial Measurement Unit to electronically mitigate rear-wheel lift is a standard affair. There’ll be no monkeying around with stoppies on this thing, thank you very much. Which doesn’t matter one bit. Cos every time you get on it, you’re having a ball whether you’re intending to or not. And that’s also the reason why I haven’t already launched into a detailed report on how its power is delivered or the throttle action or the gearbox or clutch actuation. Cos, frankly, that doesn’t matter one bit either. No one who buys a Monkey is buying it for its performance credentials. They’re buying it because of what it represents. To some, that will be days long since passed, to others the future of efficient urban mobility. And in all cases, they’ll end up with a thoroughly modern, capable and reliable motorcycle.

For the record, its 125cc horizontal single-cylinder engine measuring 52.4 x 57.9mm with a 9.3:1 compression ratio is good for almost 7kW (9hp) and 11Nm of all-important torque. Stay alert, be clever with its buttery four-speed ’box and it’ll slingshot you to uncluttered safety when the lights turn green. And its 776mm seat height means you’re not anywhere near as vulnerable as you might think you are (or certainly were on the original road-registrable Z50 monkey bikes).

Even with 40kg of gear strapped to the 107kg (kerb) machine (see sidebar), I emerged confidently from the confines of my garage and effortlessly giggled my way 115km to Phillip Island’s Highside Campground. Despite suggestions I should opt for the slower backroads, I popped out onto the South Gippsland Freeway and kept up with the 100km/h traffic with ease – at one stage, I even saw 107km/h. 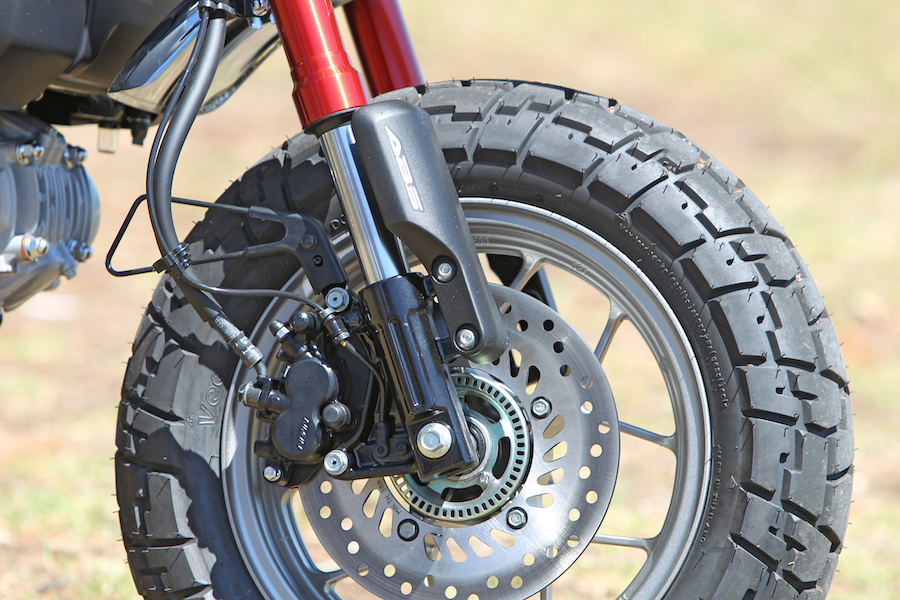 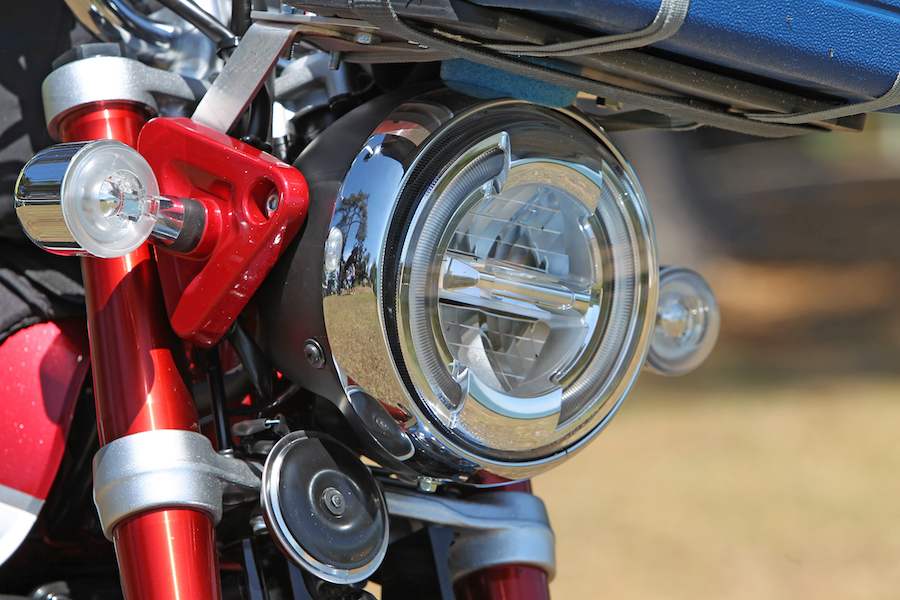 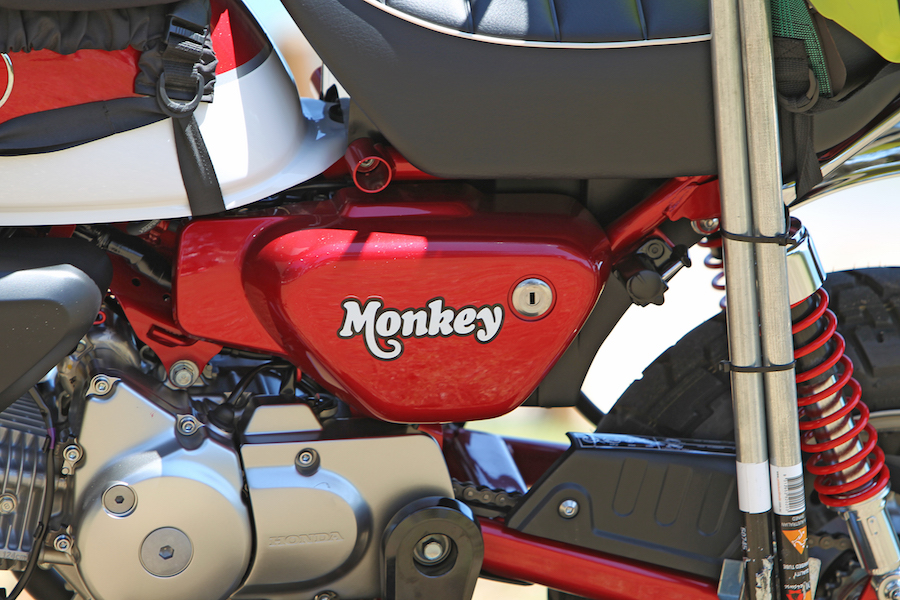 The trip home was a different story, though. Having to contend with a decent headwind, the Monkey and I were topped out anywhere between 90 and 95km/h, which hardly put us in the dangerous or vulnerable category. You learn tricks, and tucking in behind vehicles and making good use of a slipstream meant I could cheat the headwind and sail along at the sign-posted speed limit with ease.

The non-adjustable suspension package is perfectly suited to the bike and its ability. The inverted fork offers 100mm of travel while the rear has a smidgen more at 104mm. The dash – which does a cute two-eyed blinking thing during its start-up process – is light-on in the info stakes, but once again – who really cares? Speedo, odo, a fuel gauge and two trip metres is still ample information on a machine like this and every bit 40 years more advanced than the analogue speedo and click-over odo my original Zed uses. Fuel consumption is a laughable 1.8L for every 100km traveled, meaning you’ll get between 250km and 300km from its 5.6-litre tank. The 2018 Honda Monkey boasts a swag of advancements, but what hasn’t changed is the simple happiness a bike like this brings anyone who straddles it and monkeys off down the road. This very latest version of a legendary model platform will appeal to newbies, oldies, hipsters and even racers. But what will ensure its status as the King Kong of the burgeoning 12-inch tyre brigade, is it also appeals to the people who would have never otherwise identified themselves as riders. Just as it was decades ago, today it’s a motorcycle that can genuinely lay claim to growing the sport of recreational riding. And it’s been a long time since we’ve been able to say that. How I did it

When the Monkey lobbed fitted with the genuine accessory rack that wasn’t much bigger than a CD case, I had to get resourceful. With the Monkey only in my possession for two weeks, said resourcefulness needed to be relatively quick to achieve, it needed to inexpensive and whatever I did needed to be able to be removed and returned back to standard without a trace.

Aldi had a twin pack of breadboards on sale in the lead up to this year’s grand prix and the nylon-type ones are extremely handy when it comes to having to be resourceful. They’re strong, waterproof, easy to drill or shape and readily available.

The larger of the two was a simple fix, I simply attached it to the rear rack with a handful of decent-sized zip-ties and tripled its size in the process. I then zip-tied my folding stool to the breadboard which again lengthened the area on which my bag could perch atop.

Up front, it was a case of fabricating a rack from some lengths of aluminium – not only is it lightweight and strong, but it’s relatively easy to bend in a vice to create the angles I required so as to not obstruct the headlight or instruments. Once I got all that figured out, it was simply a case of bolting the smaller of the two breadboards onto the homemade mounts. A piece of pool noodle provided the cushion and support so as to not mark the headlight below.

Lastly, from some bits and pieces I had laying in my shed, I fabricated a bracket which I mounted to the swingarm in which I could insert the extendable tent poles. Because the swingarm needs to move, a loose cable tie around the top of the suspension and the poles meant they stayed put without hindering the suspension’s travel. 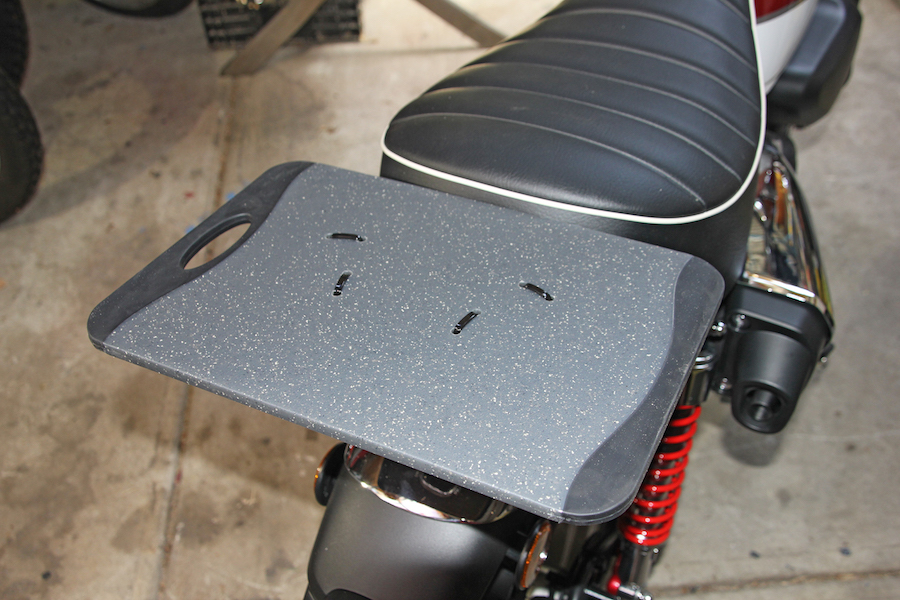 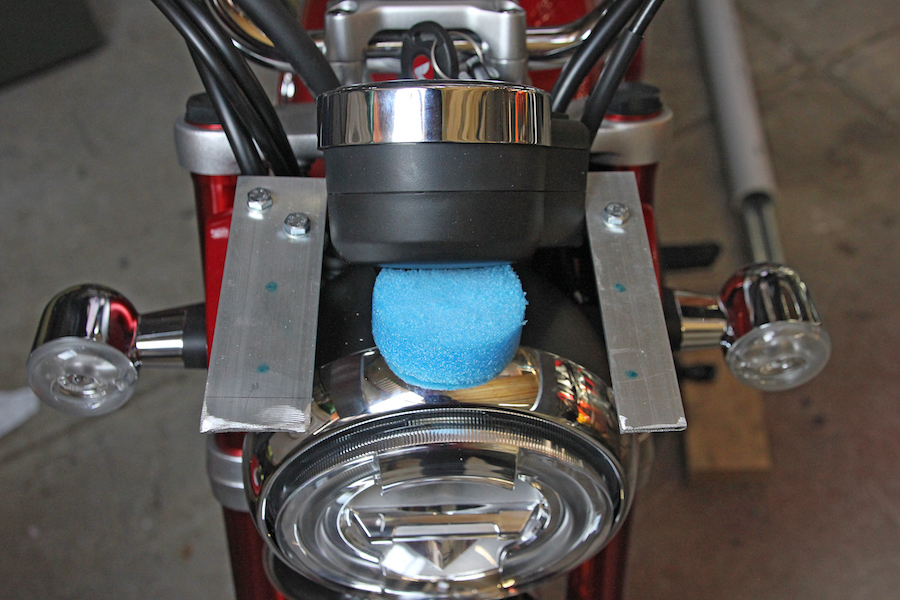 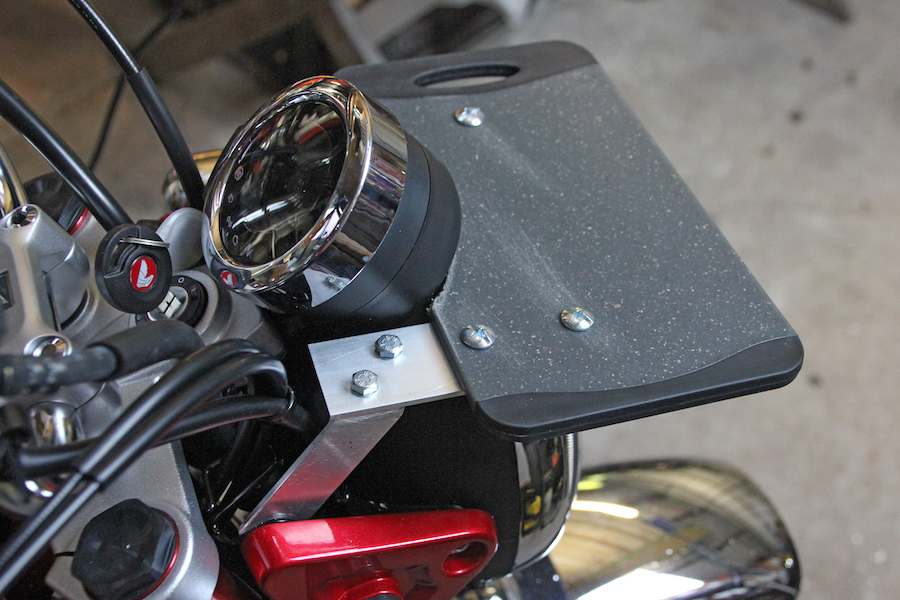 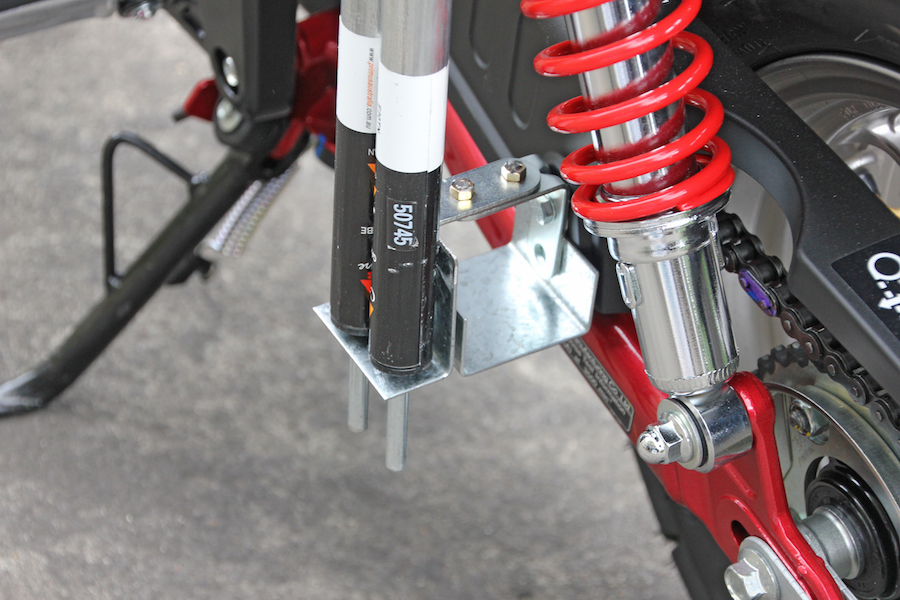 What I managed to fit

As well as four days’ worth of luggage, I took a tent, ground sheet, sleeping bag, bed roll, towel  and pillow, as well as a camping stove and fuel, plate, cutlery, coffee plunger, mug and tongs. There was a sponge, dishwashing liquid, a tea towel, three pieces of paper towel, three sheets of tin foil, three firelighters, a box of ziplock bags and even a stool. As well as a pair of boots and a pair of thongs, there was a sharp knife, (two built-in) breadboards, and an esky full of food. Because of the Island’s inclement weather, I took an extra tarp, two extendable tent poles, four heft guy ropes, 10 extra tent pegs, a lightweight waterproof jacket and a heavier jacket for extra warmth. And of course a bottle of red wine, a bottle of cheap tawny port and a small flask of whisky. What more does a girl need? Today’s Monkey can be traced back to well over half a century ago when Honda produced the first of its iconic Z50 range called the Z50M. With no suspension to speak of and tiny five-inch wheels, it was little more than a motorised stool, complete with lights and mirrors for road use and popularised in Honda’s domestic market.

By 1969, things were getting slightly more practical. While the machines were still powered by the same four-stroke 49cc single cylinder engine, the wheels were now eight inch, the front end now boasted a telescopic fork and the handlebars were foldable which meant they were easy to transport. And it is this within this generation of Z50A machinery, namely the Honda Mini Trail, where the 2018-model Monkey gets its paint scheme.

But it wasn’t until 1978 that the bike the world affectionally came to know as the ‘monkey bike’ materialised. The Z50J appeared with dual shocks looking after rear suspension duties and a larger teardrop-shaped tank which remained in production in various guises, including the off-road only R-model, right up to 1999. And it’s from this generation of so-called monkey bikes where the 2018 model gets a lot of its styling cues like the routing of the exhaust and the design of the chrome cover as well the overall and instantly recognisable parts to size ratio.