Retro is hot property in motorcycling at the moment and I, along with many others, thought BMW, Ducati and Triumph were nailing it just fine with the R nineT Racer, Scramblers and Bobber respectively.

But the Japanese want in too, with Kawasaki notably throwing the oh-so retro Z900RS and Z900RS Cafe into the ever expanding retro ring. Modern re-imaginings of the original Z1 and Z1000R which Kawasaki released in response to the hugely successful Honda CB750  in 1972.

They’re bikes that were so iconic that even though their original release was well before my time, when the modern-day ‘jaffa’ Z900RS lobbed, I was immediately aware of its significance.  To find the inspiration for the styling of the Café, we can look towards the Z1000R ridden to many AMA Superbike race victories by America’s multiple GP world champ Eddie Lawson. Kawasaki green has long been a favourite of mine. I’ve still got the posters at home of Robbie Phillis on his ZXR750 and then Marty Cragill on his ZX-7R. If any manufacturer had to anecdotally consider the value of winning on Sunday and selling Monday, well, those kinds of posters are responsible for my brother and I purchasing at least six green bikes between us. Here I am now, not quite old enough to have lived through the initial inspiration for the RS Cafe, but undoubtedly the emotions have been stirred.

On the stand, the RS Café drips street cred, even before I start the engine I’m caught by the attention to detail. Modern bikes can feel so technologically advanced, so streamlined and clinical, but on this bike the little details grab me. The shape of the seat is built for comfort, not winning races. The bikini fairing radiates 1970s vibes and the brushed satin finish on the frame and exhaust make me feel like Kawasaki gave the instruction to their builders to take their time, to make this bike look special. 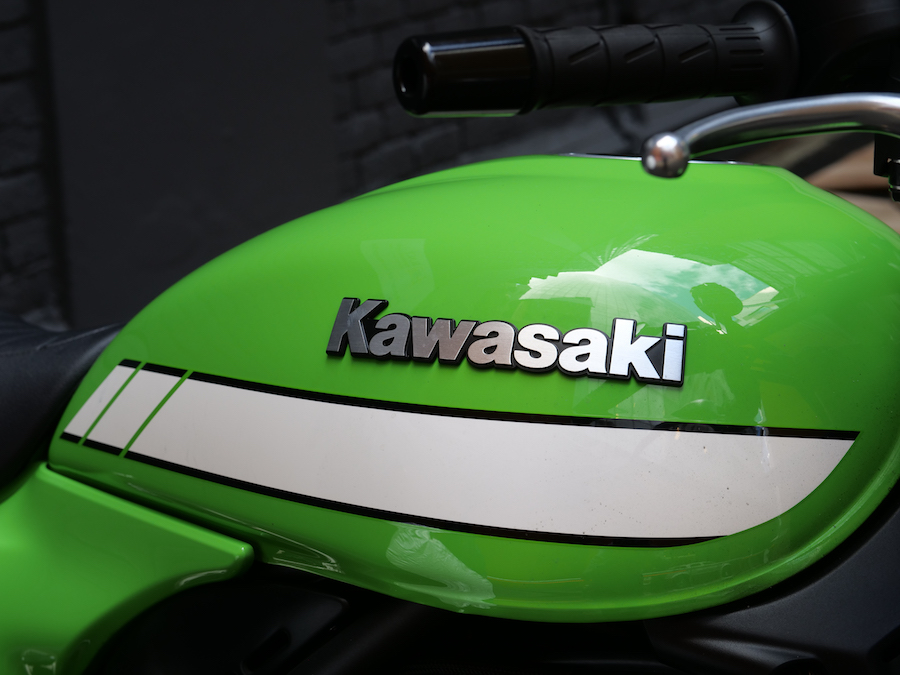 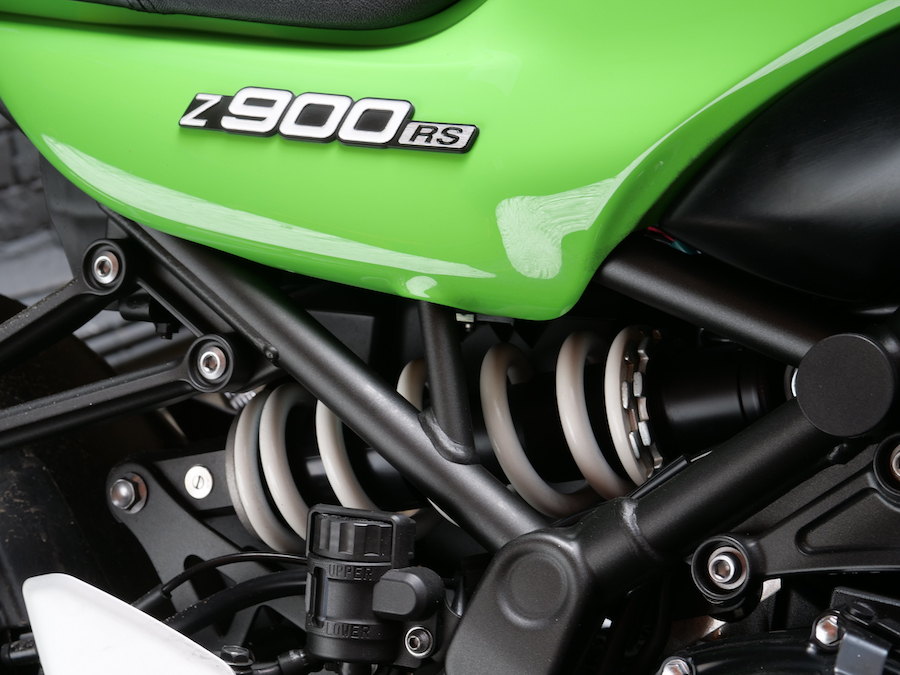 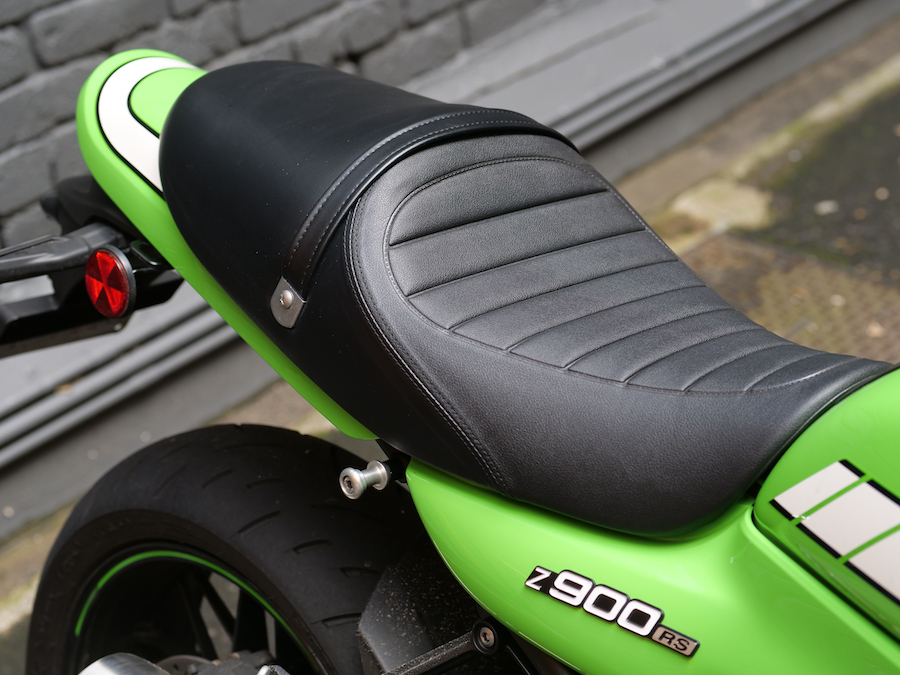 It’s a unique blend of history meets modern day with distinctive LED day lights lending an up-to-date touch. The indicators are slim. There is even a special Z900RS emblem inside the cowling itself, giving me the feeling that Kawasaki has taken a lot of pride in this creation.

The Café has a muscle bike feel to it and with the four header pipes out front I know there will be some serious horsepower on offer. I’d ridden the Z900 supernaked enough to really fall in love with that engine…I knew what to expect and I knew it would deliver exactly what I wanted.

It is well mannered and smooth around town, but ready to burst into life and rev hard when required.

Kawasaki is known for its high-quality builds and the Café is no exception. The bodywork feels like it has been made to last, the paint feels thick and well applied and all the parts have a robust feeling about them. The sort of build that will satisfy the bloke who’s always complaining that they don’t make things like they used to. 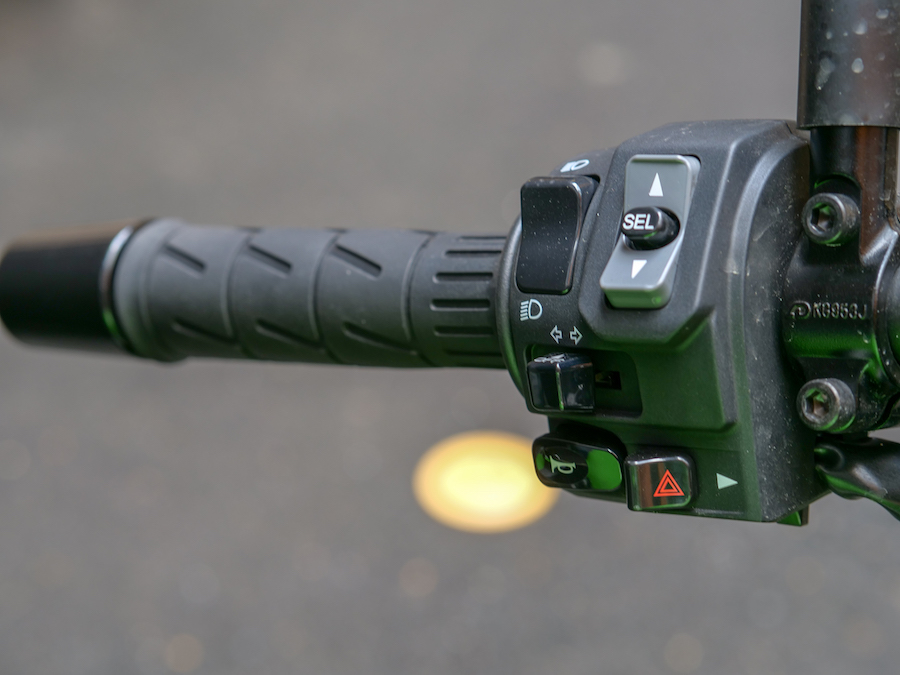 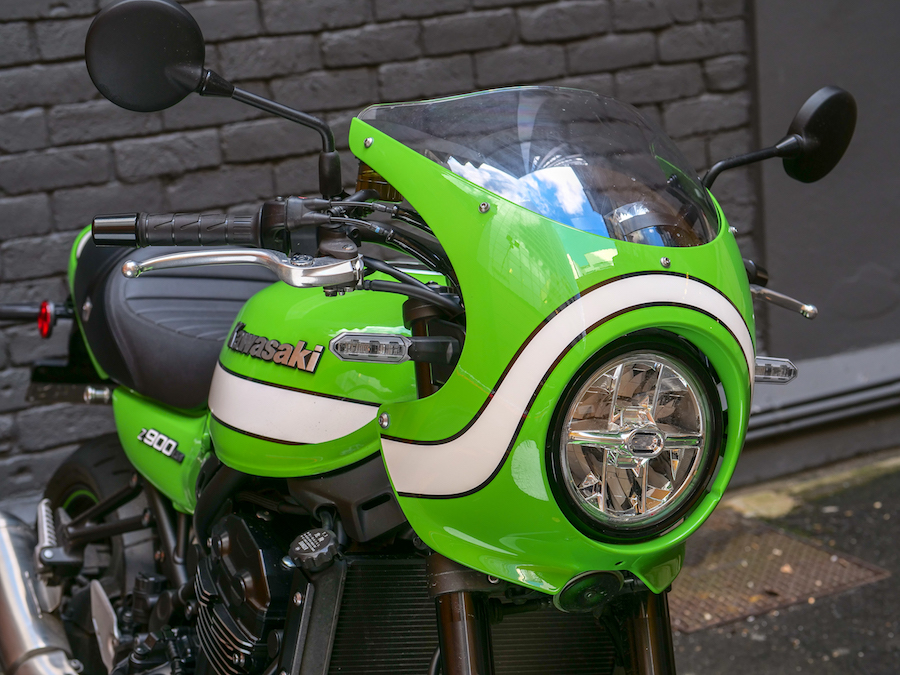 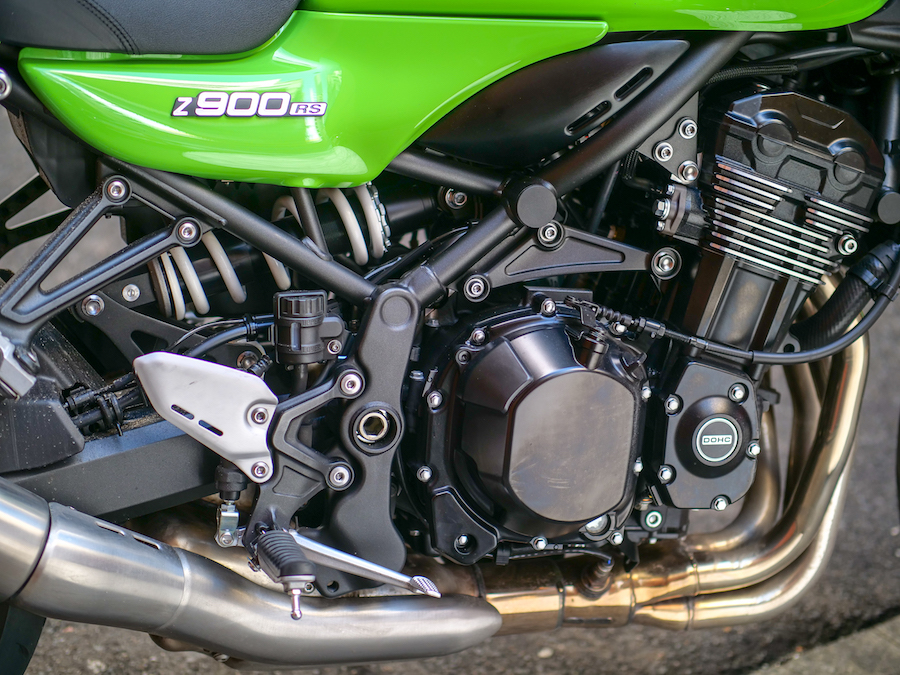 I spent the first few days with the Café sampling all different kinds of roads – form inner-city urban streets to freeway stints and twisty sections. As expected, the engine is a total standout and I’d rate it as one of the most fun yet practical powerplants for road use on the market today. The inline-four configuration can scream when you work it hard, but it is never too peaky – just full of torque starting low in the mid-range.

The last time I rode the Z900 was during AMCN’s 2017 Motorcycle of the Year shootout, and there is no doubt the RS Café has a much more capable frame and running gear tham the standard nakedbike.

Tipping into corners the Café is absolutely rock solid, with the 41mm up-side down fork feeling completely smooth and confidence inspiring. What I did find though was that I couldn’t really hold corner speed like I would on a bike like the Z900. The Café doesn’t feel like a modern flickable weapon, it feels like it has to be stopped and turned old school, then I could use that wicked engine to power out. It was a slightly different approach, a style that perhaps harks back to the era of the original Zed, but it worked for me.

And getting the bike stopped is no problem, that same confidence is also there under brakes. At 215kg, the Café is reasonably beefy but it seems to carry the weight down low. The result is high stability under heavy braking and at this point, the RS Café is ticking many boxes of approval. 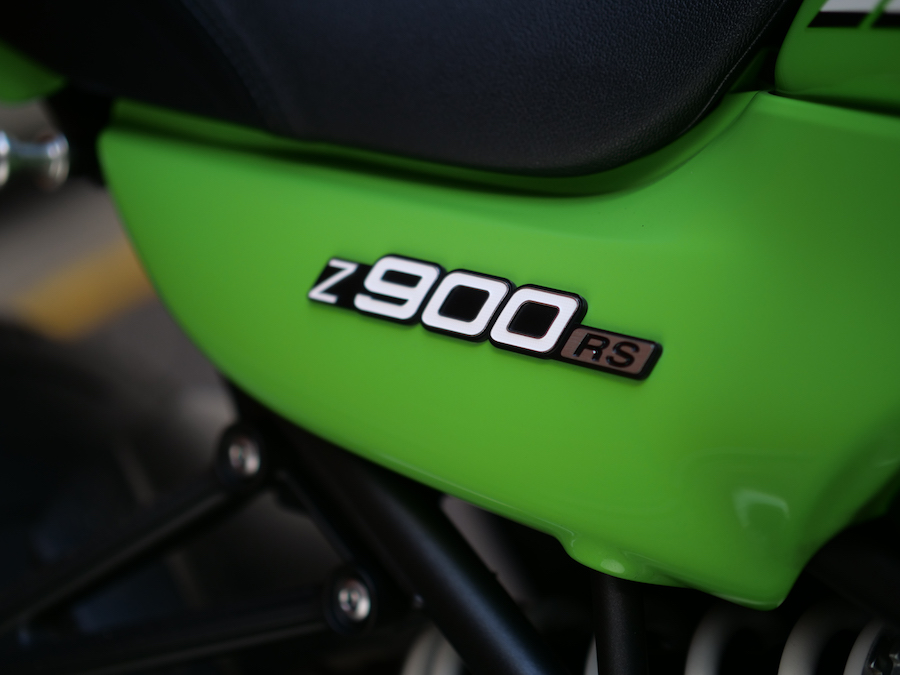 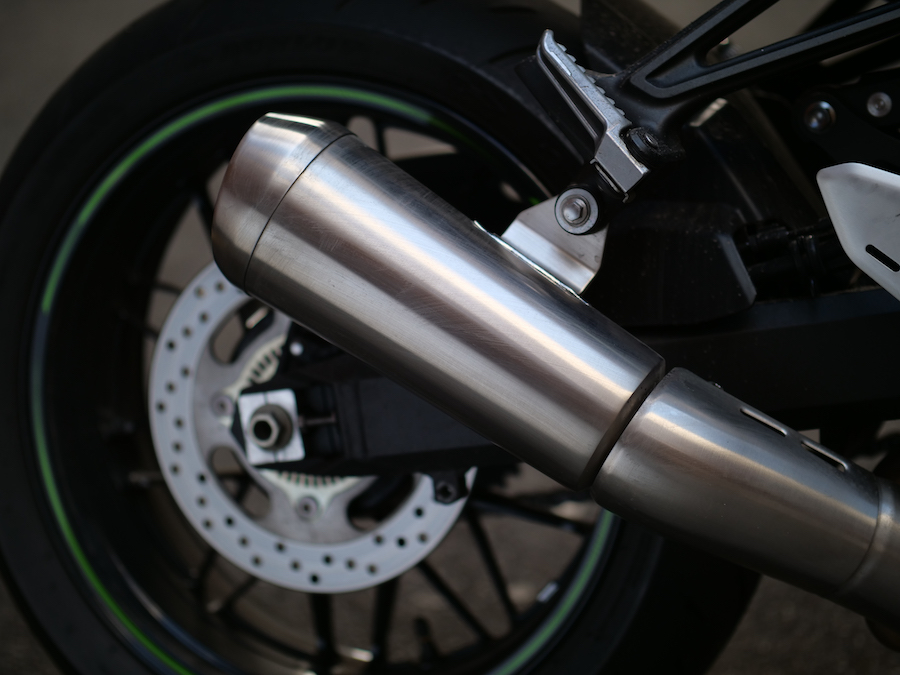 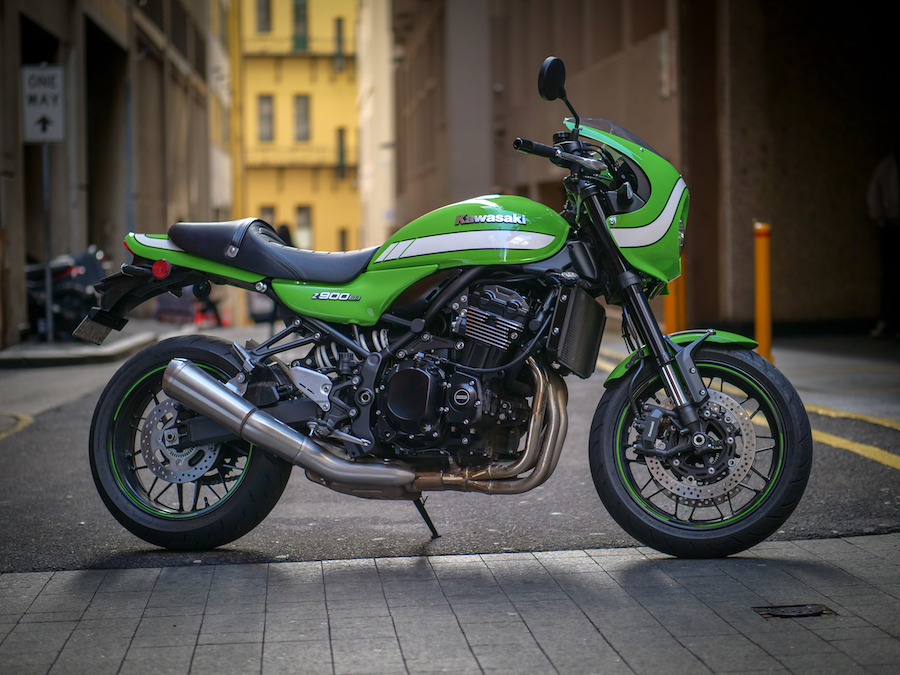 Which leads me to another component that caught my attention. Whoever is running the transmission department at Kawasaki is absolutely killing it. This is yet another clutch from Kawasaki with a beautifully light and responsive feel, they really have clutches worked out. The gearbox itself also has a very light feel and changing up through the gears the synchros are so precise I can hardly imagine the need for a quickshifter. On downshifts I can get as greedy as I like with the slipper clutch coming into play to smooth things out.

So far I’ve got all the ingredients for a very satisfying ride, and the RS Café also manoeuvres through traffic easily thanks to that low centre of gravity. Out on the open road, the kilometres disappear at will and I found myself able to plan longer stints without any trouble thanks to the super comfy seat. It hugs your backside and feels really well padded. Unlike the original models, the modern-day version comes complete with ABS and traction control and it’s easy to toggle settings using the left switchblock. This is a small detail – but another pleasant surprise is that the turn signals are prominent and easy to find with your thumb (that isn’t always the case with some new bikes at the moment, and it’s annoying (for me and other road users) when you hit the horn instead. No problems with the Café.

A more important detail is just how well Kawasaki has designed the instrument cluster. Something that is unusual in 2018 is that there are two dials, one for revs and one for speed, with a multifunction digital display in the middle. It is all very easy to read, practical and looks fantastic. There was one weird thing that had me guessing – the snowflake looking icon on the digital display that blinks occasionally is the economical riding indicator, basically telling you when you are saving fuel and not twisting the throttle too hard. Ummm, thanks for that, Kawasaki, I guess? Overall though, the dash is another tasteful design element where form meets function perfectly.

Kawasaki has also gone to great lengths to make the exhaust note as pleasing as possible, and perhaps make a few people think twice about fitting an aftermarket unit. When the inline four starts to rev, it sounds fantastic and really sings. If you feel the need, there are some nice sounding pieces available which also look the part, but the OEM unit is still impressive – just maybe not to the hyped level of the marketing blurb. Would I fit an aftermarket exhaust? Difficult question – I like the clean OEM look and the sound is still great.

Overall, it’s safe to say I completely enjoyed my time with the RS Café. Last year I labelled the BMW R NineT Racer a modern classic, and the Z900 RS Café is right up there as well, there are just so many things to love about this bike. It’s certainly a machine you could live with every day, but I think the real genius in ‘reimagined’ models like the Z900 RS is that you don’t have to have been around in 1972 to sense the history and come under the spell. Keep it green! Compared to the sporty Z900, the Z900RS riding position is more neutral. Kawasaki achieved this by raising the front and lowering the rear. But for many Kawasaki fans, the real choice here will be deciding between either the Jaffa-inspired Z900 RS or the lime green RS Café. They are both unique and eye catching, but totally different bikes to ride.

I found the Z900 tipped into corners much faster and the Café had an even more relaxed seating position, with the cowl able to break the air better for touring. ASBK series commentator and Ride Rage Radio presenter Phil Harlum had just taken delivery of his Z900RS, so a good opportunity to get a back-to back opinion.

“While the Cafe and standard RS are the same bike underneath, Kawasaki has made them feel completely different. The higher seat on the RS, along with the higher ’bars gives a vastly different riding position with more seat to peg distance and less reach to the controls. After riding them back to back, my ageing body felt more comfortable on the standard version and the bars seem to offer far more leverage which for me, meant less effort to turn into a corner.”

So what are the actual physical differences? It’s really all about the riding position and the overlay graphic shows it best. Where did I come from?

Let’s have a quick look at the Cafe’s forebears