Michelin’s Pilot Road 4 was a beaut hoop for sports-touring riders who do exactly that. So just how much better can Michelin’s newest Pilot Road 5 really be? We’re glad you asked

Michelin claims to have hit its goals of making the already great Road 4 tyre even better, announcing to an assembled gaggle of the world’s motorcycle media it had achieved increased levels of both dry- and wet-weather grip with its latest Road 5.

The increase in dry-weather grip, the company says, has been achieved with some flash new rubber compounds combined with Michelin’s patented 2CT and 2CT+ technology, which first appeared on the French firm’s Pilot RS (road sport) tyre we tested in Qatar 12 months ago (AMCN Vol 66 No 21).

As for the improved wet-weather grip levels, that all comes down to something Michelin does well – sipes. All-new XST Evo sipe technology to be specific.

But enough talk, let’s go riding and find out how all of these acronyms translate to the all-important contact patches between us and the asphalt. The route for the road ride was a three-hour blast through the mountains just outside Huelva in Spain. The choice of bikes reflected the wide target market for the new hoop – including a Yamaha MT-07, BMW R nineT, Aprilia Tuono V4 1100 RR and a Kawasaki Ninja 1000SX that, with its bulk and squirt, I singled out for the first leg to put pressure on the new tyres.

The mercury was still in single digits, the road surface even cooler, and within 500 metres we negotiated our first roundabout. I had the big Kawasaki in Full Power mode as I leaned it over and gave it a decent kick in the guts on exit. The tyres weren’t bothered. Along the short freeway section, I noted how velvety the ride was but, having not ridden the big Ninja previously, I wasn’t sure if it was the suspension working well or the tyre. Later, when I jumped aboard a Yamaha MT-10 – a bike I know well – I realised the tyres were providing noticeably improved comfort. In the mountains, I swapped to a Yamaha MT-07 and went searching for uneven road surfaces. The mid-sized, twin-pot rode over and through them all with ease, without any tram-tracking.

For the final leg, I was on the BMW R nineT, and it highlighted the performance of the new tyres best. With a couple of faster bikes to chase through the twisty sections, I was rolling the tyres from edge to edge, making the most of the softer compound on the shoulders, where tread is almost non-existent. There wasn’t a hint of protest from back or front, even when I got a little too enthusiastic and had to ask the tyre to perform aggressive braking and turning duties simultaneously. 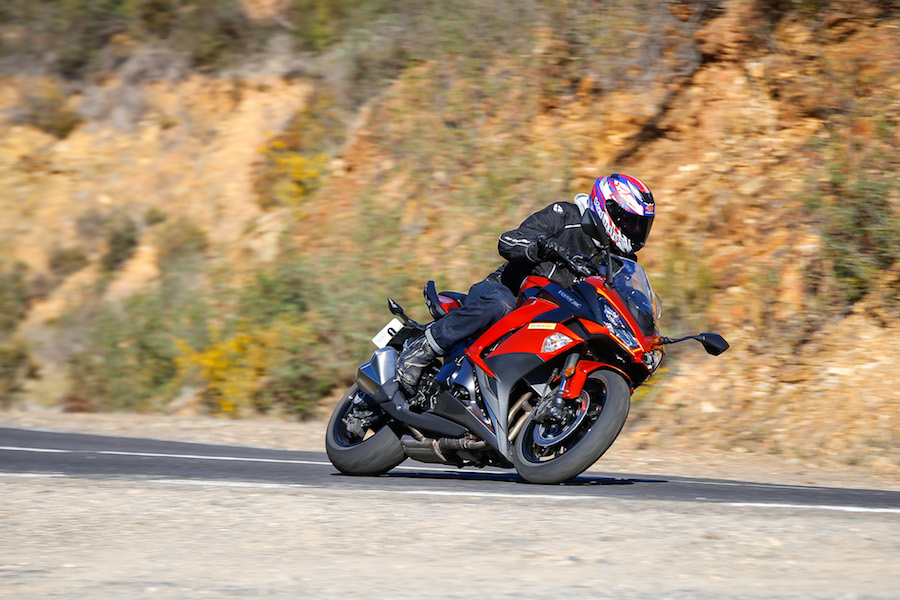 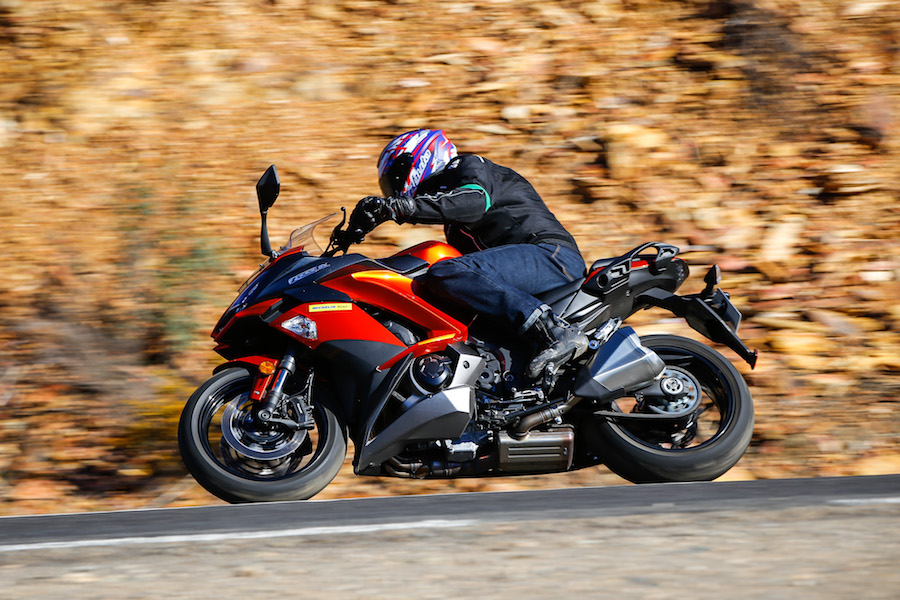 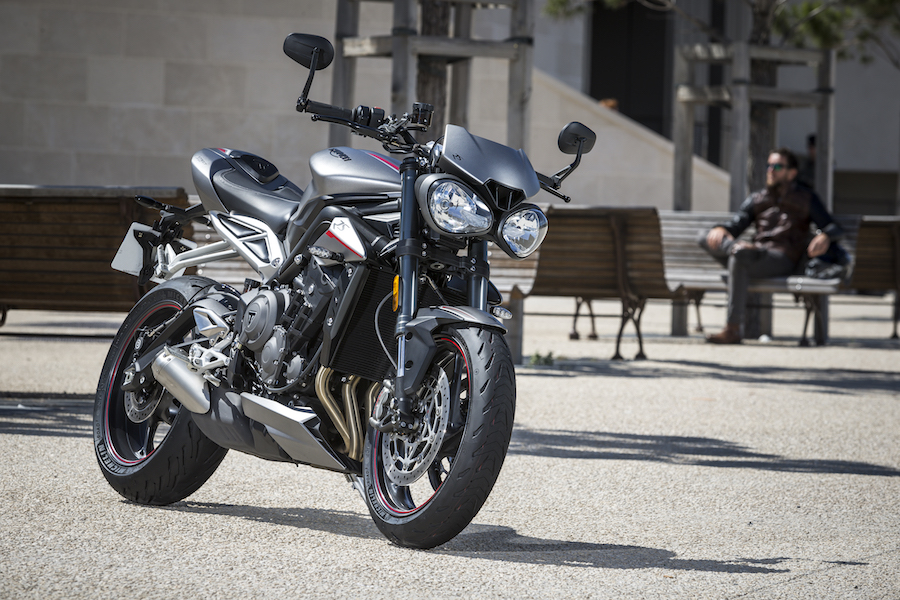 Michelin claims a Road 5 tyre with 5500km of use will offer a level of wet-weather grip equal or superior to a brand-new Pilot Road 4 tyre. To prove this, we were spectators to a practical demonstration by a Michelin test rider.

Two identical Suzuki GSX-S750s were kitted up with high-tech GPS systems to measure braking distance – the same gear used by all car and bike manufacturers.

One bike was fitted with a set of worn Road 5 tyres that had clocked up more than 5000km, the other had a brand-new set of Road 4s.

We watched the rider throw out the anchors at 110km/h with enough vigour to lift the rear wheel. Three runs were made on each bike, and the Road 5 won the shootout 3-0, by lengths of between one and two metres. It was then our turn to test the wet-weather performance on a circuit receiving a drenching from built-in sprinklers. To add an element of difficulty to the twisting tarmac, a cardboard cut-out of a car needed to be avoided, and an emergency braking area required the bike to be slowed from 110km/h to 10km/h in a short distance. The weapons of choice were Triumph’s Street Triple and Yamaha’s MT-10.

After a couple of corners taken with trepidation. I got into the groove and found a decent amount of lean-angle grip was available, especially up front, with a generous amount of feedback.

As I pushed harder, I became more concerned about losing the rear than the front. In the heavy breaking area, with the rear tyre running on its slick centre groove, I did feel the rear lock momentarily before the ABS kicked in. The Road 5 isn’t an all-out sports tyre like its Pilot RS brethren. Michelin was quick to point this out, but still had enough confidence in its performance to allow us a fast thrash around the Circuito Monteblanco track in Seville.

BMW’s S 1000 XR and Ducati SuperSport models enlisted for the track session provided a good cross-section of Michelin’s target market for the Road 5. The Ducati is a sportsbike with touring potential, while the BMW is a touring bike with a fair dollop of sports DNA. Despite low-to-mid-teen temperatures, the tyres warmed quickly, and I had my knee on the deck by Turn 4 thanks to the softer compound rubber used on the shoulder.

The higher cornering speeds also highlighted the rigidity of the ACT+ belt system used on the rear tyre, which felt firm and planted. Up front, turn-in felt light and easy with plenty of grip and feedback.

Riding the BMW, I was nudging 250km/h at the end of the straight and the bike felt stable, with just a hint of squirm as I pulled up its bulk to negotiate the tight Turn 1 right-hander. Both sessions were relatively short, but the tyres on each bike had cycled through a couple of groups and were six sessions old. They showed an acceptable amount of distress after being flogged by a group of journalists.

A full day’s thrashing at the hands of an experienced track rider is outside the Road 5’s design brief, but in the hands of a trackday newcomer they will be more than up to the task, and will still be ready to return to daily commuter and touring duties afterwards. A cross-section of the Road 5 tyre reveals the triangular-shaped well at the base of each sipe. Looking at it, you may wonder why something so simple is such a big deal, but the technology used to shape the sipe is cutting edge.

A joint venture between Michelin and tooling specialists Five created AddUP, which specialises in additive metal manufacturing – a form of 3D printing, similar to that already used in the plastics industry.

Using a metal printing process also dramatically increases flexibility in design, with changes only requiring alterations to the software, not the usual lengthy and costly tooling changes.

Raw material wastage is almost zero, the 3D printer only using the material required to form the desired shape. It’s mind-boggling to think just how much technology goes into producing a motorcycle tyre that does exactly what it says on the tin. Michelin has a massive amount of technology, technical information and development budget at its disposal, as well as its MotoGP experience.

That’s evident in the new Road 5 tyre, as the line between sports and sports touring becomes ever more blurred. Tyres such as Michelin’s new Road 5 now offer dry-weather grip levels superior to what we expected from full-blooded sports tyres not too many years ago. At the same time, wet weather grip has also steadily improved.

After sampling Michelin’s latest effort and learning about what goes on behind the scenes, it revealed why we pay a little more to have quality rubber on our bikes. It’s a smart investment when you consider they are the only thing connecting us, and our pride and joy, to the road.