The 2019 Motul Pirelli Australian Superbike Championship (ASBK) kicked off with a nail-biting Kawasaki Superbike race which went down to the wire here at Phillip Island. The opening round of the seven-round national Superbike championship featured as part of the FIM Superbike World Championship Weekend, held February 22-24.

After an epic race long battle Team Suzuki ECSTAR Australia’s Wayne Maxwell (Suzuki GSX-R) managed to capitalise on a last-corner Aiden Wagner (Yamaha YZF-R1) error to claim the victory, finishing only a tenth of a second ahead of the Yamaha privateer with BCperfromance Kawasaki rider Bryan Staring half a second back on the new ZX10RR.

After a brilliant qualifying session yesterday, Wagner started on pole ahead of Yamaha Racing Team teammates Cru Halliday and Daniel Falzon (Yamaha YZF-R1). As the field launched off the line Troy Bayliss (Ducati Panigale FE) had a superb start from the second row of the grid. He catapulted into second position while Maxwell fared much the same to improve his position from sixth to third by turn 1. Both Wagner and Halliday seemed to have problems keeping the front wheel down off the line – Halliday dropping to fifth and Wagner all the way back in 10th. 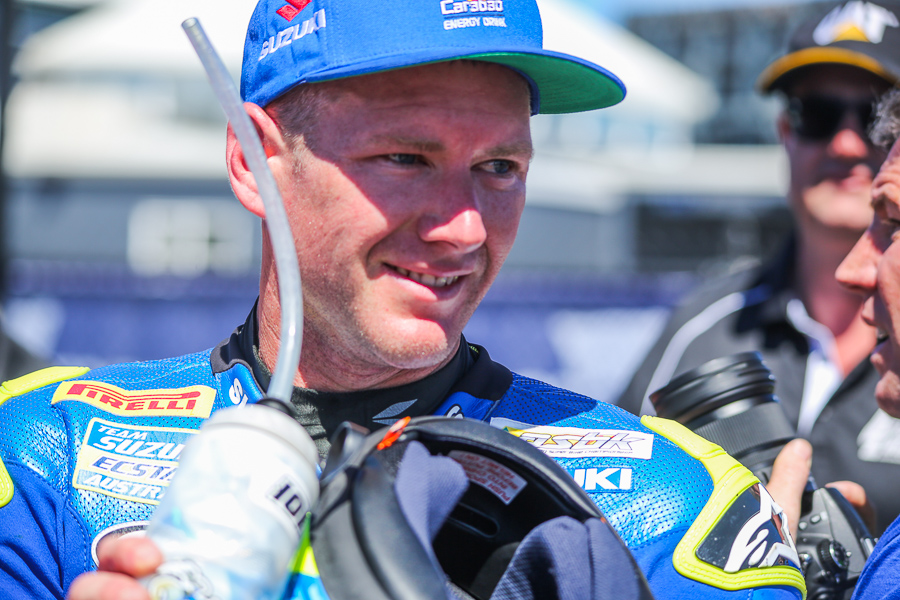 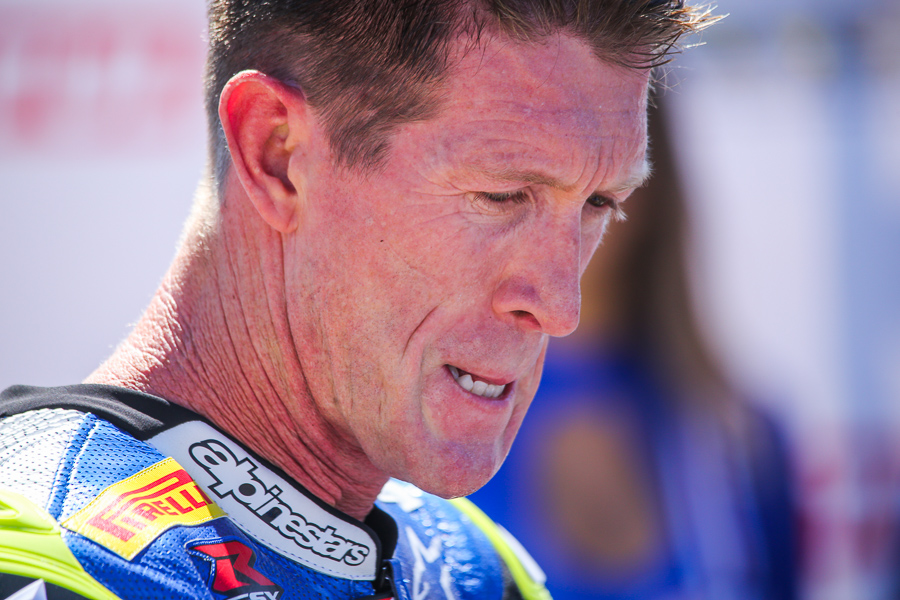 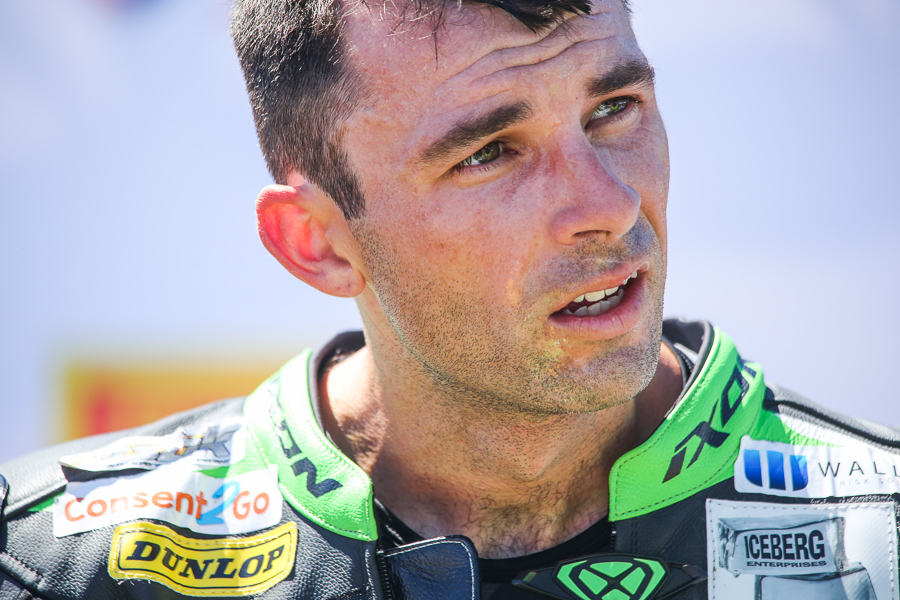 As the field crossed the stripe to start the second lap it was Bayliss in the lead with Maxwell in hot pursuit. Halliday began his recovery by making his way into third with Staring also improving to fourth from tenth on the grid.

By the beginning of lap 4 the field had started to sort themselves out, with Aiden Wagner calmly working his way through the pack to hit the lead ahead of Maxwell and Bayliss. Bayliss’s hopes however evaporated at turn 1 after trying to overtake Maxwell around the outside, the two bikes touching sending Bayliss off into the gravel. The Ducati legend managed to get up and walk away, but his race was over.

At just over half distance the lead group was Wagner, Maxwell, and Halliday, with Wagner still holding onto the lead despite solid pressure from the pursuing Suzuki and Yamaha riders.

Late in the race it was on for young and old between Wagner and Maxwell at the front. Maxwell took the lead into turn 1, Wagner retook the lead at turn 2. Wagner went wide at turn 4 letting Maxwell through, however Wagner was already back in front by the Hayshed (turn 8). The action was fast and frenetic before Wagner settled into the lead with a lap to go and looked to be odds-on for victory. 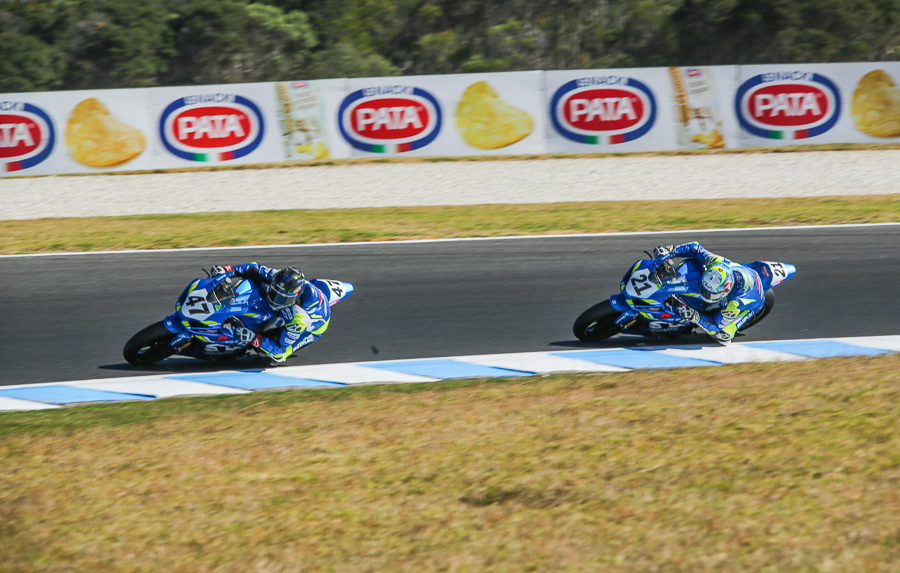 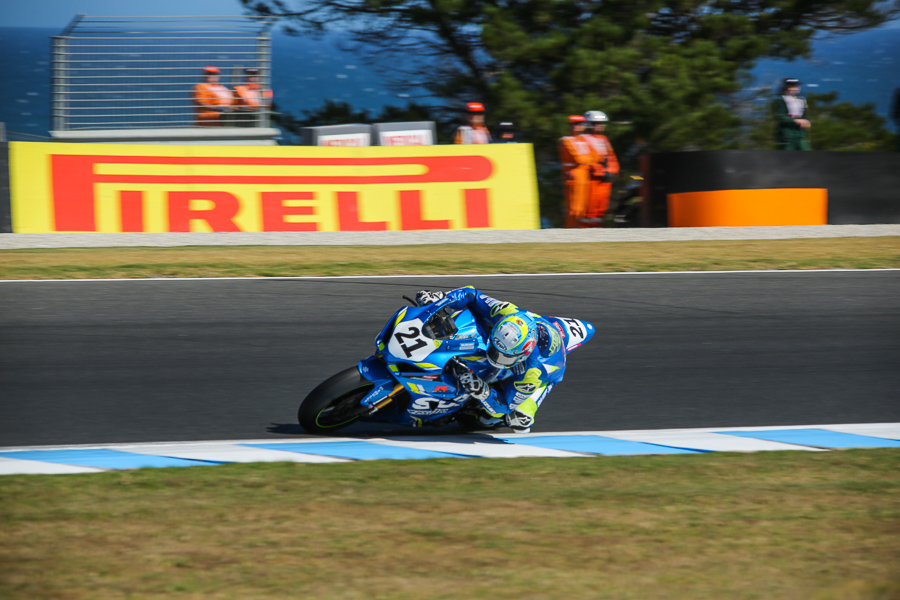 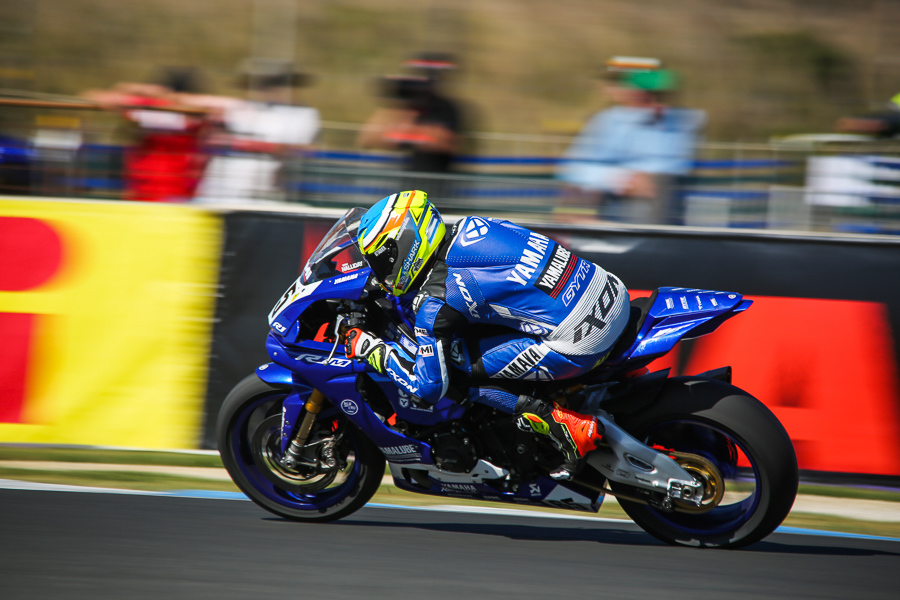 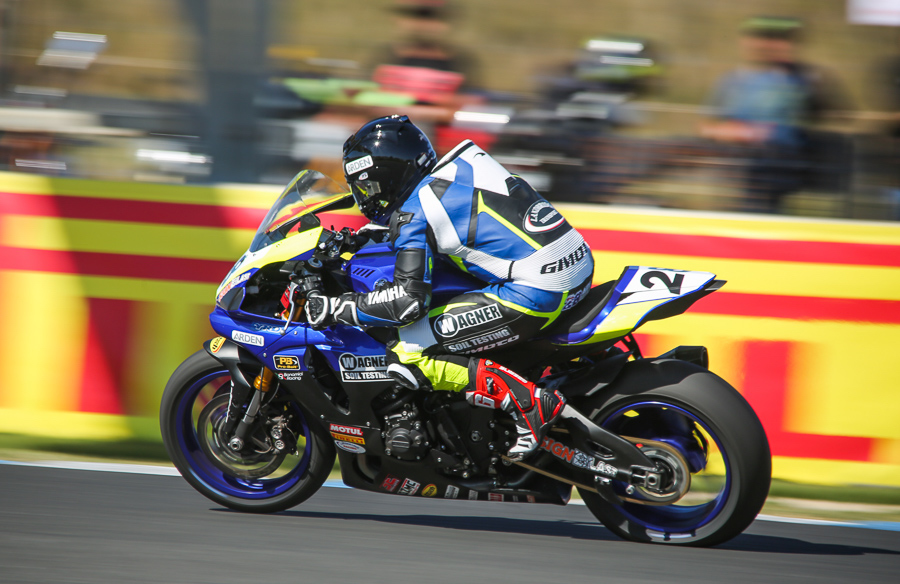 Staring capitalised on his late race pace and found his way past Halliday into third, pushing the Yamaha rider back to fourth.

Second-placed Maxwell stalked leader Wagner through the whole of the final lap, eventually applying enough pressure to force the leader into a mistake. Wagner missed a shift at the final corner, found a false neutral and upset the bike. He managed to save the subsequent wobble but it wasn’t enough to save the race. Maxwell pounced and streaked for the finish line to steal the win and the fairy-tale from the young privateer’s grasp, ahead of Staring, Halliday, Waters and Falzon.

Wayne Maxwell was thrilled to take the victory.

“Super stoked!” he exclaimed. “I couldn’t believe my start, I’ve been struggling with starts for years but I found myself in that front group.

“I had speed early on when the grip was good and then when it went away I got a bit nervous and Aiden came past and he was going so quick in places I was struggling- it was a big seesaw! I knew he was just hanging in there and I was just hanging in there, but it’s a lot easier to follow so when he made a mistake out of turn 11 I was there to capitalise on it.”

Wagner was circumspect about the result despite losing the race. “I’m happy with second, I knew we could have taken the win” he said. “I made a mistake, fault of my own, didn’t positively shift enough so it upset the bike. But Wayne was there all race, he was just waiting for a time to attack.”

Bryan Staring was happy with his performance, and predicted more close racing to come over the weekend.

“A good start from what could have been expected from tenth on the grid, to start the championship with a podium, that’s always the goal” said Staring. “I don’t expect any two races to be the same this weekend, everyone’s so happy to fight at the start of the year. Let’s see how we go this afternoon.” 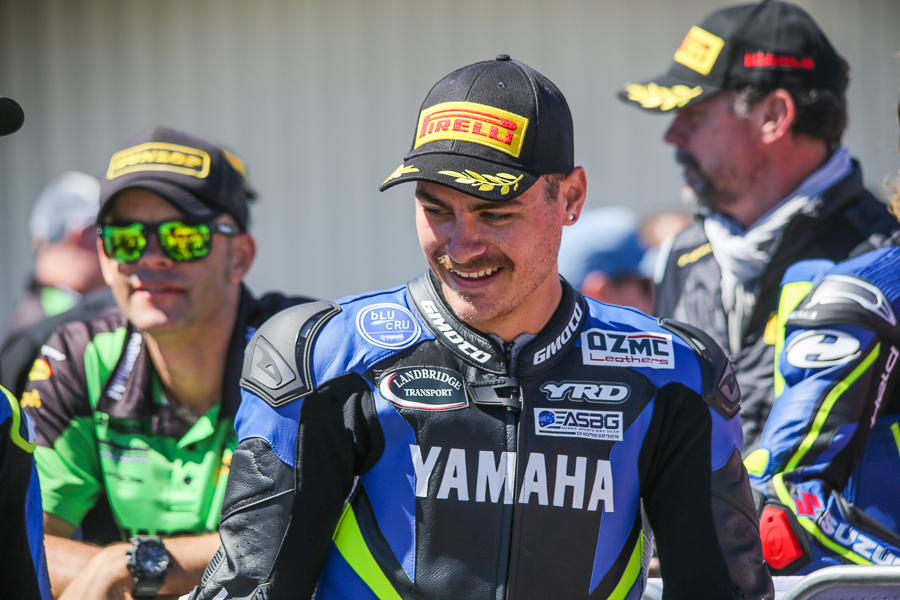 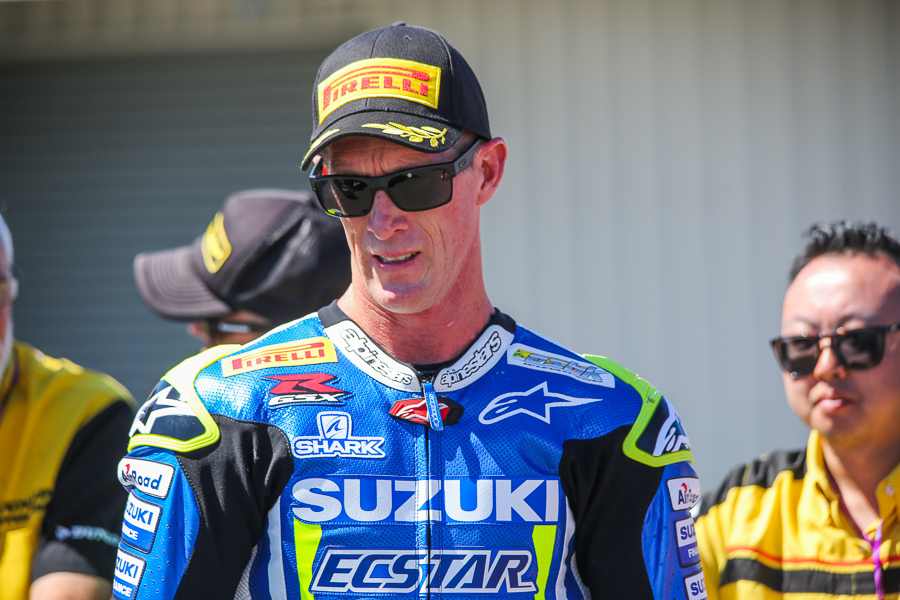 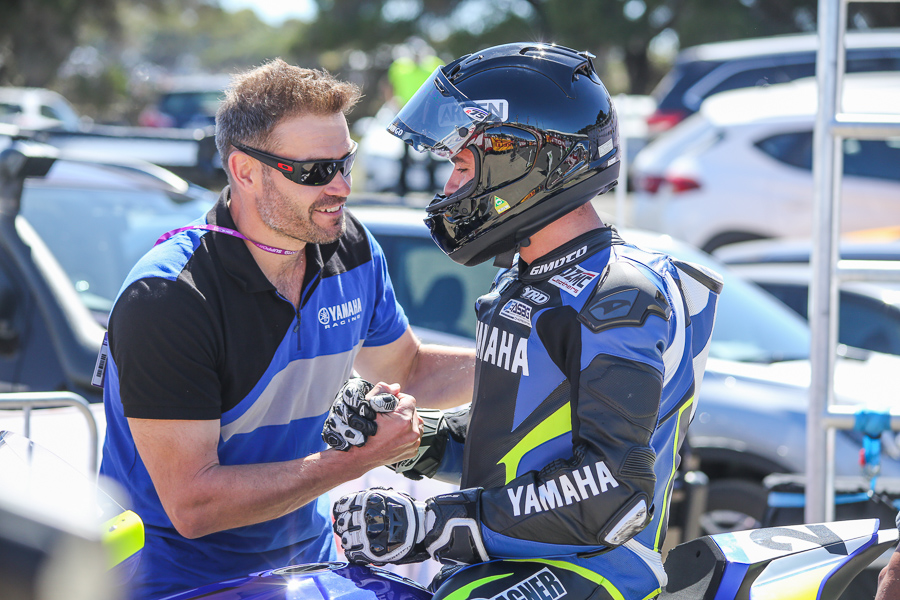