MAD MAX: MADDER THAN MAX | He did what?

In mid-1977 Dale Bensch and a couple of mates spotted an ad in Peter Stevens requesting 10 film extras. Little did they know how much that casting call would change their lives. Nearly 44 years later, Bensch is still revered around the world for the hair-raising stunt that gave rise to the urban myth that he was killed in the making of the low-budget post-apocalyptic thriller, Mad Max.

Dale Bensch is alive and well, retired, and lives a quiet life in Melbourne. He enjoys riding his Harley and after a long absence from the Mad Max phenomenon, he loves engaging with the film’s hard-core fans both here and abroad. He’s visited Mad Max-crazed Japan four times.

Back in the 70s, Bensch was a drag racer and a member of the Vigilantes MC. After answering the ad, he pulled a wheelie aboard his Kawasaki 900 for director George Miller and producer Byron Kennedy outside their Kew production house.

Miller and Kennedy were excited, for this was no ordinary Kwaka Nine.

“I built it into a road-going drag bike; I fitted 450 Honda pistons, which took it out to something like 1015cc, Road & Track cams, electronic ignition and ported and polished the heads.”

The custom yellow four-into-one was tuned for length into the collector box, bigger main jets were fitted and the gearing was lowered for drag racing, in which he competed between 1977-’82.

The 10-week shoot for Mad Max commencing October ’77 was thrown into disarray when stunt co-ordinator Grant Page was injured in a bike crash on the way to an early shoot, sustaining a broken leg. The original leading lady Rosie Bailey, who was riding pillion at the time, was badly injured too, and replaced by Joanne Samuel. With his leg still healing Page cut the cast off and completed Jim Goose’s MFP bike slide into a car half-way through the kinetic opening chase scene.

Mad Max had a budget of just $US300,000. According to some reports, the riding extras were paid in beer, but Bensch remembers a $30 to $50 daily stipend depending on what he was doing.

For the iconic scene where the nomad bikers descend on Clunes to pick up the remains of the Night Rider, Bensch was given the call sheet detailing his two jobs that day – the famous donuts and wheelie.

When it was noted on a YouTube clip that he didn’t transition from the Clunes burnout to the wheelie in one shot, the punter remarked, ‘I understand one take would have been really risky. Still cool as f*** though’.

“I left a long mark leaving the donut, with a gap going into second gear, which they didn’t want to show. For the ground-level wheelie shot they asked me to get close to the camera but said ‘don’t hit it’ because it was worth $100,000…”

A barking dog following the shredding rear tyre is almost lost in the commotion. When Dale said that four or so Vigilantes appeared in Mad Max, there was actually one more.

“That was our club dog, Wonder Dog or WD. He was a stray that we took in and he came on club runs and even tours to South Oz, Tassie and Bundaberg. He sat on the pillion seat and absolutely loved it.”

WD had ‘Vigilantes MC’ inked onto his stomach and wore dog-sized club colours on runs.

The infamous crash scene on Kirks Bridge happens when Max finally goes Mad, running the gang off the road in his Black V8 Interceptor before doing a wild U-turn and spreadeagling the baddies on the bridge. Two bikers fly off the bridge, and two others, including Bensch, tumble down the road. 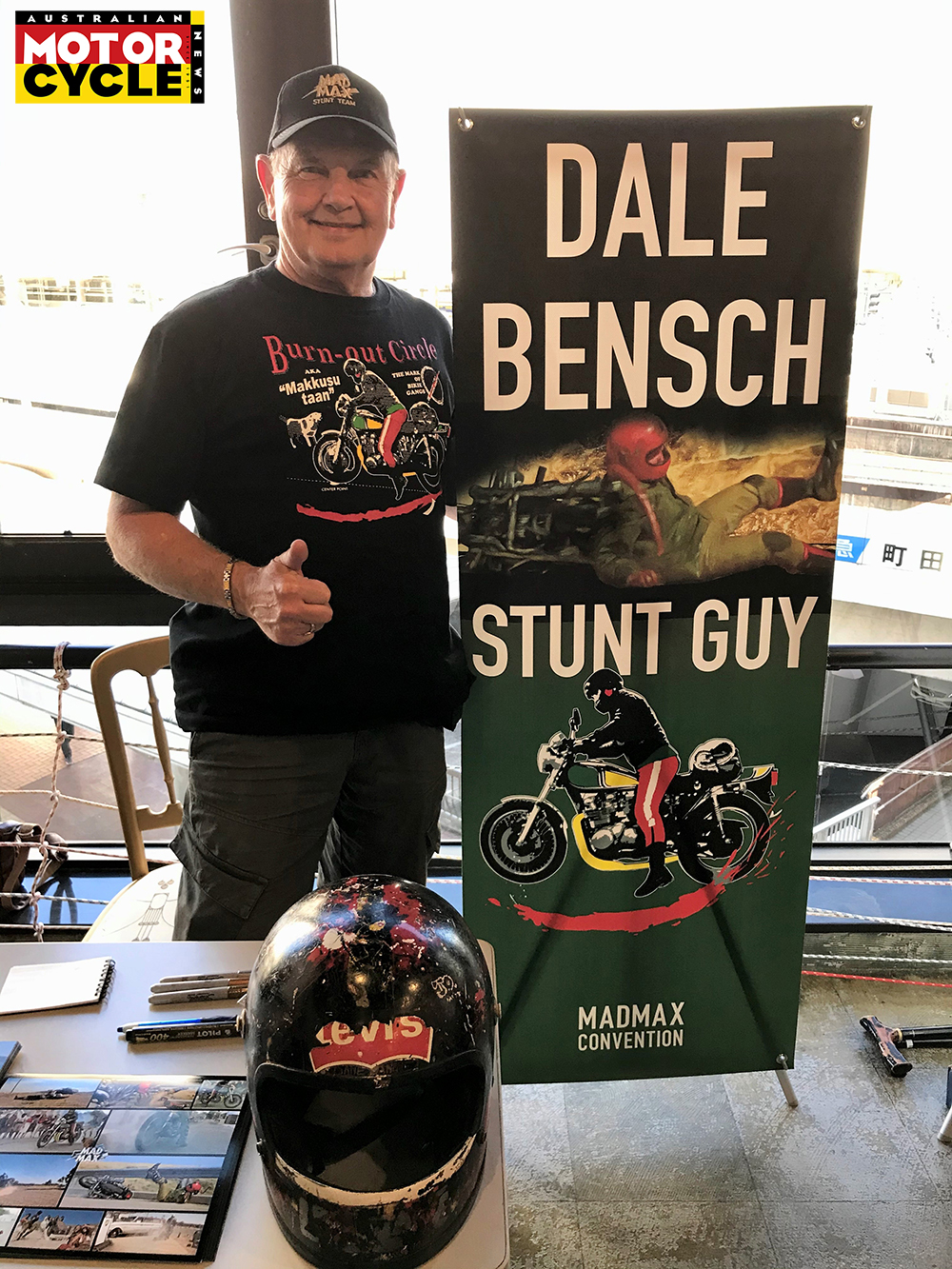 The instrument clusters on both bikes were removed to minimise damage, and the road surface watered to help lay the bikes down. Dale, riding Starbuck’s Z1000, rode on the left with fellow Vigilante ‘Mad Mick’ Daniels to his right.

“The plan was to roll onto the bridge at around 60km/h then put into a slide and lay it down. Without the speedos, we had to estimate the speed. I got highsided because I held on a little too long. I should’ve released my grip earlier.”

Bensch’s lid struck the kerb then was whacked hard by the following bike’s front wheel as he slid down the road. That’s an image of the action at the top of this page.

“There were all sorts of stories about what happened to me, but I was okay, not even a concussion.”

Even so, the heavy slo-mo hit to Bensch Bell helmet was cut from earlier modified TV versions of the movie.

Not only is Dale still in one piece, so is his old Z900. Its current owners traced the bike back to Bensch via a VicRoads registration card from the late 70s with the original rego number written on it, and immediately started a full resto. The bike’s third owner, Greg Dumesny, set a class speed record of 142.48mph on the bike at Lake Gairdner in 1994.

The passion of his fans around the world, particularly Japan, humbles Bensch.

“When I did a fan event in Japan in 2016, I did a donut on a replica bike and people started crying. One guy, Yoshi, has two replicas of my bike – one in Japan and one in Australia!” 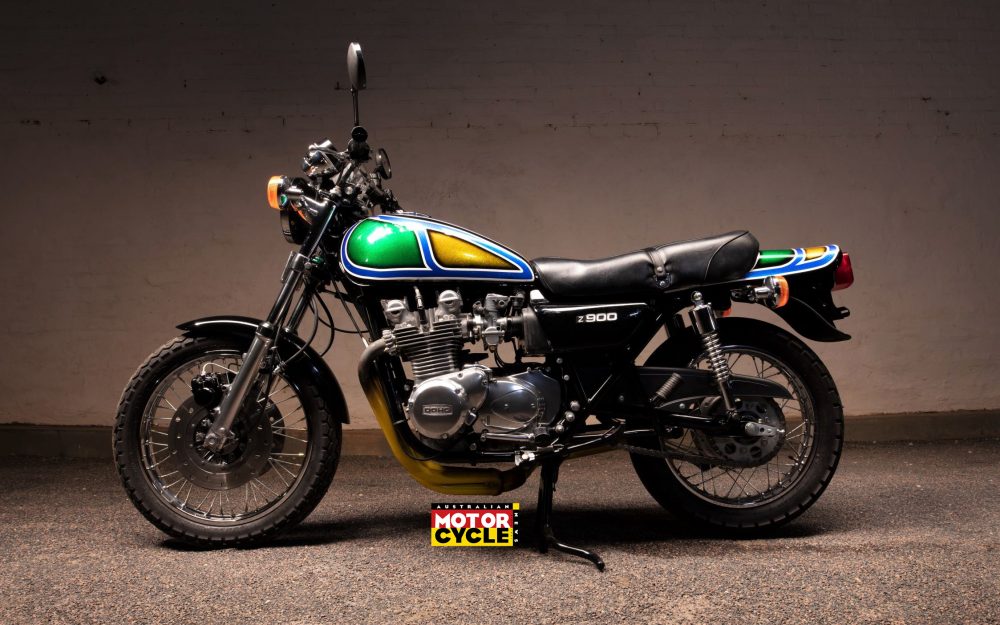