The 43rd edition of the 24 Heures Motos is back on track. The entry list has now been released. A reduced field will go out on track for a closed-door race on 29 and 30 August.

After being rescheduled for the end of August due to the global health crisis, the 24 Heures Motos is revving up for action once again. 43 teams will be at Le Mans to start practice sessions for the 43rd edition on the Bugatti circuit on Wednesday 26 August.

Despite a smaller grid, we can expect action-packed racing. All the top teams will be there with new rider line-ups and/or equipment.

Wójcik Racing Team, who made a splash at the Bol d’Or, have a reinforced their line-up, with Australian rider Broc Parkes in the saddle of the Yamaha 77 alongside Gino Rea and Axel Maurin.

Having climbed back up to 4th place in the standings following their win at Sepang, YART Yamaha are fielding Marvin Fritz, Niccolò Canepa and Karel Hanika.

Although reigning champions Webike SRC Kawasaki France Trickstar are lagging behind in the standings, they will fight to make up for lost time with riders Jérémy Guarnoni, Erwan Nigon and David Checa and their new tyre supplier Michelin.

The 2017-2018 FIM EWC title winners F.C.C. TSR Honda France are counting on their new CBR1000RR-R to get them into the Top 5 with riders Josh Hook, Freddy Foray and Mike di Meglio.

The top teams in the Superstock class will be on the track as well, starting with Moto Ain, winners of last season’s FIM Endurance World Cup and current leaders in class after back-to-back wins at the Bol d’Or and the 8 Hours of Sepang.

François Ribeiro, Head of Eurosport Events
“The quality of the 24H Motos field promises to give television viewers an action-packed race to watch. Eurosport Events and ACO have worked hand in hand to transport our fans to the heart of the track action despite the Bugatti circuit being off-limits for the public. Our core group of permanent teams has weathered the financial impact of the Covid-19 crisis, but the lockdown period has strained the finances of sponsors and dealers supporting independent teams. A closed-doors 24H Motos has made it harder for teams to establish partnerships. Four of our permanent teams will not be at Le Mans, though two of them plan to return for the Bol d’Or, where restrictions on public access could be partially lifted if future government decisions make it all possible.”

Pierre Fillon, President of the Automobile Club de l’Ouest
“The current crisis has hit our competitors hard and impacted their budgets for the season. We at ACO and our partners felt it was vital to go ahead with this year’s edition, which once again promises to be a thrilling race even though it is being held behind closed doors. We have a top-notch field. Everything is in place to bring this 43rd edition to the largest possible number of fans.”

Jorge Viegas, FIM President
“On behalf of the FIM I would like to thank the ACO and Eurosport Events for the efforts they have made to ensure that the 24 Hours Motos even without spectators will be a real spectacle and also to assure to all fans about the quality of the show and the fact that this historic event will return, for your passion in 2021, stronger than ever. 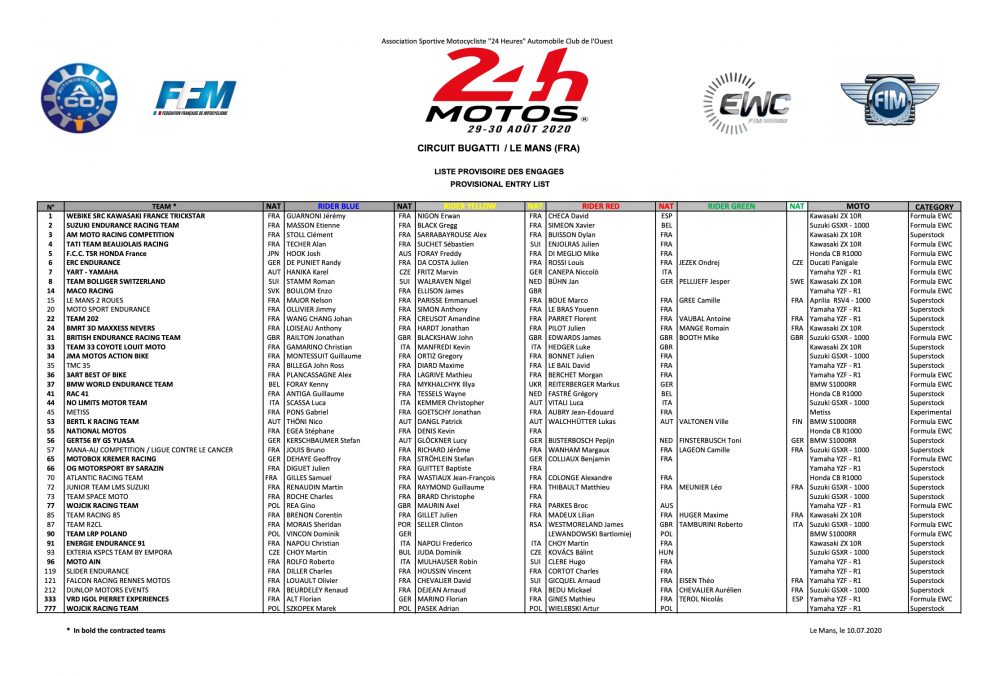