Since Kawasaki released its H2 and H2R in 2015, the supercharged weapons have gathered a certain mystique, with YouTube liberally scattered with H2’s laying waste to any vehicle brave enough to have a crack. Insanely fast, exotic and extremely desirable they may be, but with a H2 costing the better part of 45k these days, a H2 or the impractical and more expensive H2R are out of reach for the average rider. Enter the Kawasaki  Z H2. It puts Kawasaki’s supercharged juiciness within reach, in a popular supernaked package that’s undressed to impress.

The Z H2 carries the Z family resemblance, it looks tough as you approach it, and once up close you realise it’s a nicely fettled piece of kit as well. The frame is new and offers more flex than the H2’s which, according to Kawasaki, means a smoother and more compliant ride better suited to the road.

The spiderweb of green trellised frame looks cool against the rest of the bike’s darkness and the eye can’t help but be drawn to the supercharged insignia on the engine’s left-hand side. The supercharger itself can be seen on the right side if you go searching. 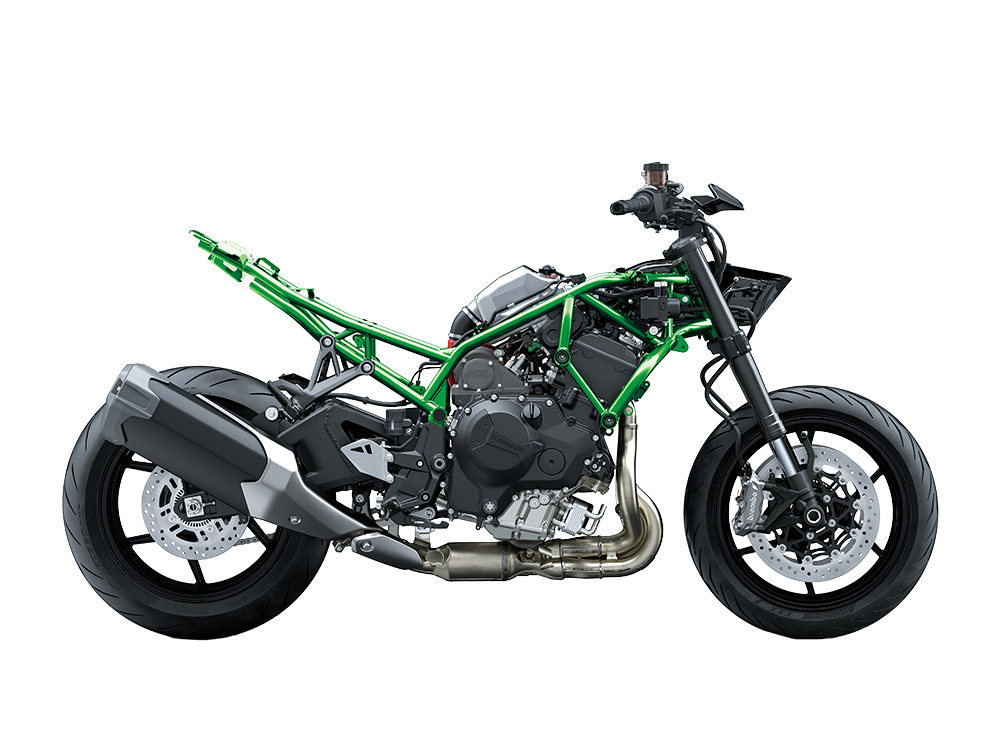 Also on the left-hand side is the large, tinted chrome air intake complete with green mesh. It’s responsible for channelling copious amounts of fresh air into the supercharger and is made of aluminium to handle the pressure the supercharger creates. The pretty green mesh is also functional, says Kawasaki, claiming it smooths airflow to maximise efficiency. And it all looks very cool until you realised that it’s all and only on the left-hand side. There’s not even a dummy intake on the right so looking front on, the bike’s lopsided, and it just took a little bit of the lust away for me.

Like many of its competitors, the Z’s riding position is relaxed and comfortable for my height. If you’re over six foot, your knees are likely to rest on the frame just below the tank. It’s not uncomfortable, but it’s not as comfortable as other supernakeds on the market where your knees are recessed into the tank. It may also bring the quality of the frame paint into question as the years of ownership, er, wear on.

There’s a slight reach to the high, one-piece ’bar and the colour TFT is mounted on the bar clamp, so checking the bikes vitals is easy and quick. Not only does that help avoid getting busted by the plod, but facilitates reading the abundance of info on tap. Speed, gear position, odometer, dual trip meters, fuel gauge, range to empty, current/average fuel consumption, outside temperature, coolant temperature, clock, Economical Riding Indicator, lean angle and riding mode are all displayed on one of two optional dash styles. 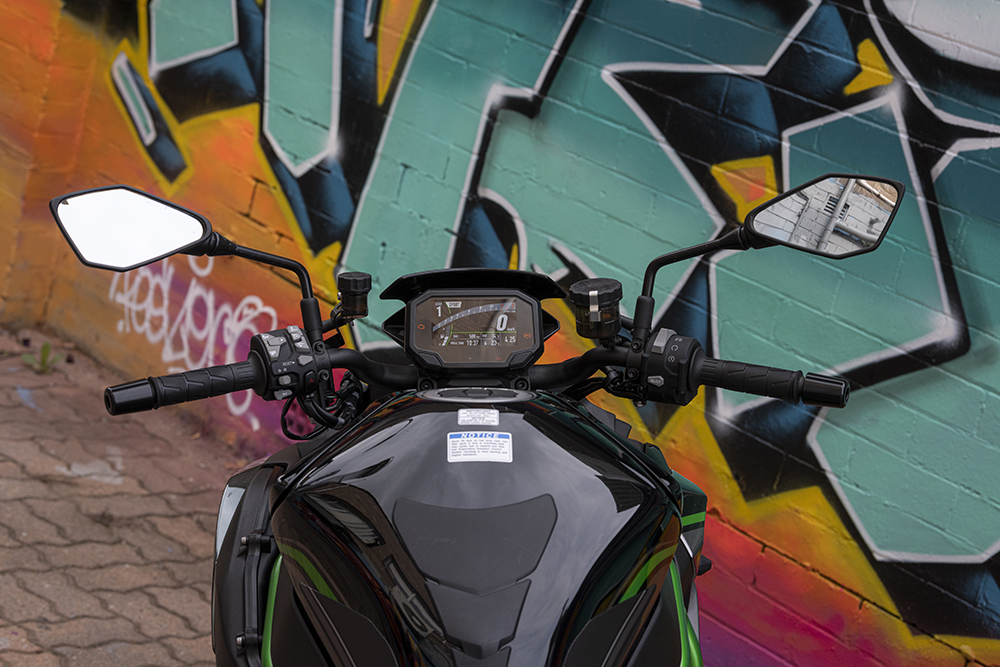 There are four switchable riding modes; Sport, Road, and Rain with a fourth mode – Rider that allows you to adjust both the horsepower and the four-level traction control system (including off) to suit the conditions you’re riding in.

The menu is activated via the right-hand switch block just below the starter switch, but you scroll through the menu via a button on the left-hand switch. Modes can be changed on the fly by getting off the gas for a few seconds and you can connect your smartphone to the TFT via Bluetooth. For reasons unknown to me, this can be a difficult task on some bikes, but it was simple and quick. And you only have to do it once, after that it connects to your phone automatically and it lets you access a bunch of info through Kawasaki’s Rideology app. Basic info such as fuel level and odo can be displayed on your phone, you can select your preferred riding mode while you’re finishing your coffee and the app will even log your trip, including average speed, distance, fuel consumption and more. You can also set service and oil change reminders.

The Z H2 is packing a lot of punch in the engine department, but it’s not the sort of mammoth horsepower of its H2 brethren. It shares a similar engine design but is tuned for torque and usability rather than all-out power. In Z H2 guise, the 998cc liquid-cooled DOHC 16-valve supercharged inline-four is armed with 147kW of power at 11,000rpm and 137Nm of torque at 8500rpm. 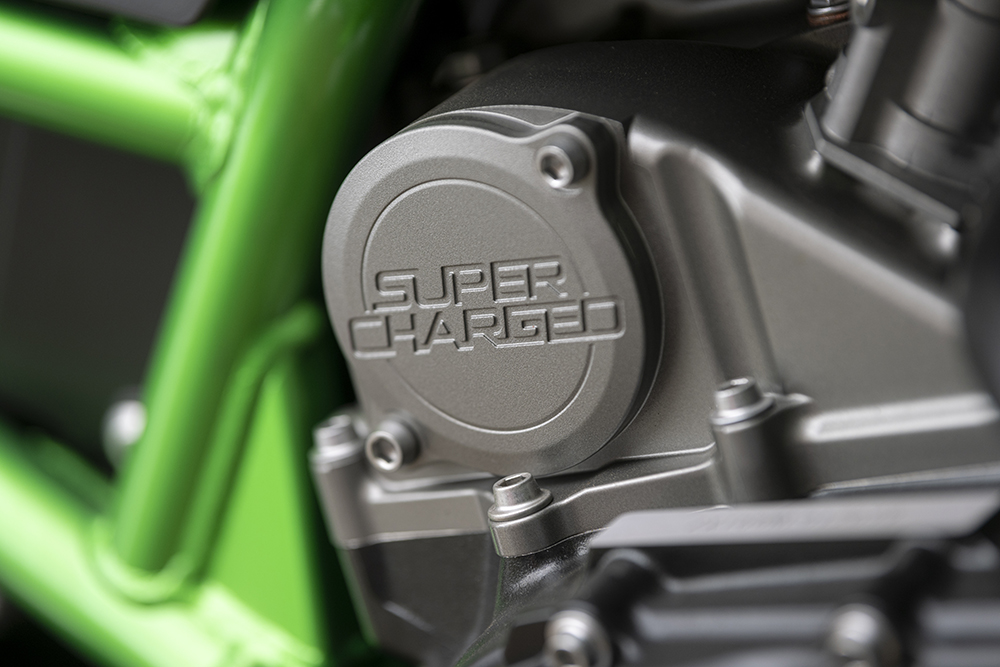 For a dose of perspective, the H2 carbon currently offered by Kawasaki Australia for a whisker over $46k boasts 178.5kW and 141.7Nm at 11,500rpm. But 147kW isn’t anything to sneeze at, it’s just a lower level of madman, but a madman nonetheless.

The Z’s power comes on strong from right down low in the revs and just keeps building and building. At around 6000rpm there’s a sense that things just got real and the front wheel starts reaching for the sky, but there’s no discernible point where the power seems to kick in harder, it’s just a progressive build up to blur-ville and it’s utterly addictive.

It may be desirable and unique, but it’s user friendly, smooth and ready for everyday use. 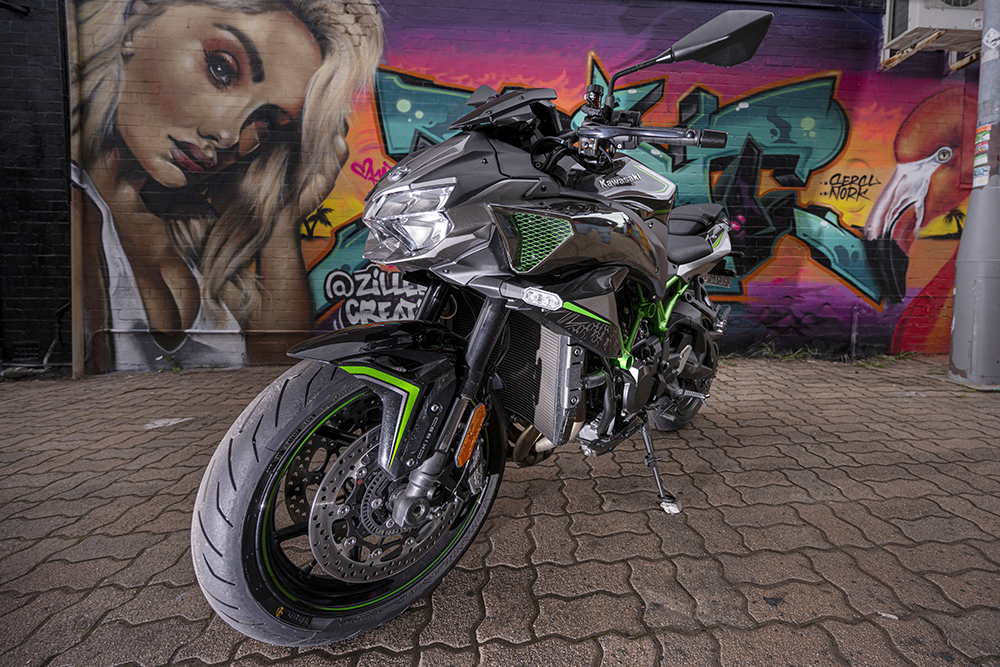 The way the engine makes its power and drives away with its torque is all very nice and sexy, but the ‘cake and eat it too’ element is the funny little chirping noise emitted by the supercharger. It’s a noise that never gets old and if addiction for that simple sound overtakes your sensibilities like it did me, you’ll find yourself holding gears longer than you normally would and changing gear without using the multidirectional quickshifter just to hear its supercharged noise between changes.

Perhaps Kawasaki thought it could balance the symmetry by fitting an extremely large and all-too effective muffler to the right-hand side. It means the bike is very quiet – not how I usually like ’em – but it does mean you get to hear the glorious hoon chirp emanating from the supercharger.

Braking duties are handled by an assortment of equipment. Up front, there’s Brembo M4 Monobloc calipers mated to a Nissin master cylinder and clamp onto a pair of 290mm discs. Out back is a single 226mm disc that’s brought under control by a twin-piston Nissin caliper. While it’s all a bit parts bin in its approach, you really can’t fault it at road speeds and the ABS-assisted Brembos had the front tyre predictably chirping heading into a few slow-speed bends. 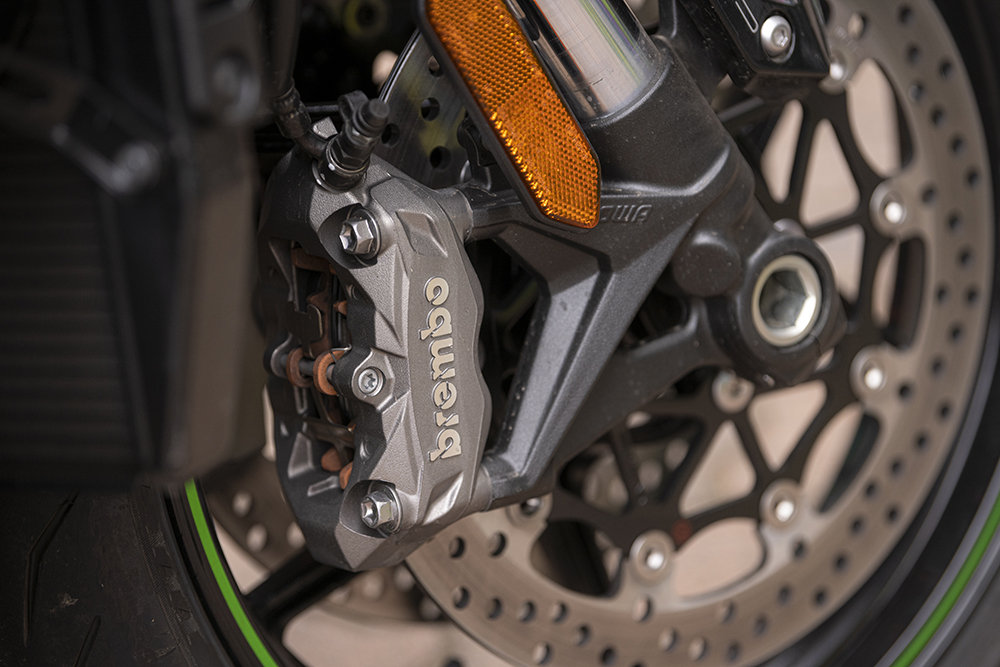 The ABS takes none of the feel away and the feedback at the lever is as good as it gets. The rear offers plenty of feel and finesse to make it the perfect companion for settling the bike or riding it through the traffic when isolation restrictions are lifted and sets all the tin tops loose again.

In fact, that excellent feel extends to the Z’s entire front end. The front tyre feels like it’s glued to the road, but in addition it provides huge feedback. It’s reassuring and encourages you to push the front end as far as your courage and ability will take you. The whole package is ultra-stable through a turn, too, although it does tend to squat in the rear and push you a little wide out of slower-speed turns if you’re on that gas hard. Stability is a good thing for the most part, but it has a small drawback. Compared to the H2 and H2R, the Z requires a bit of muscle to flip it from side-to-side through fast esses and hooking into a hairpin requires a bit more muscle. 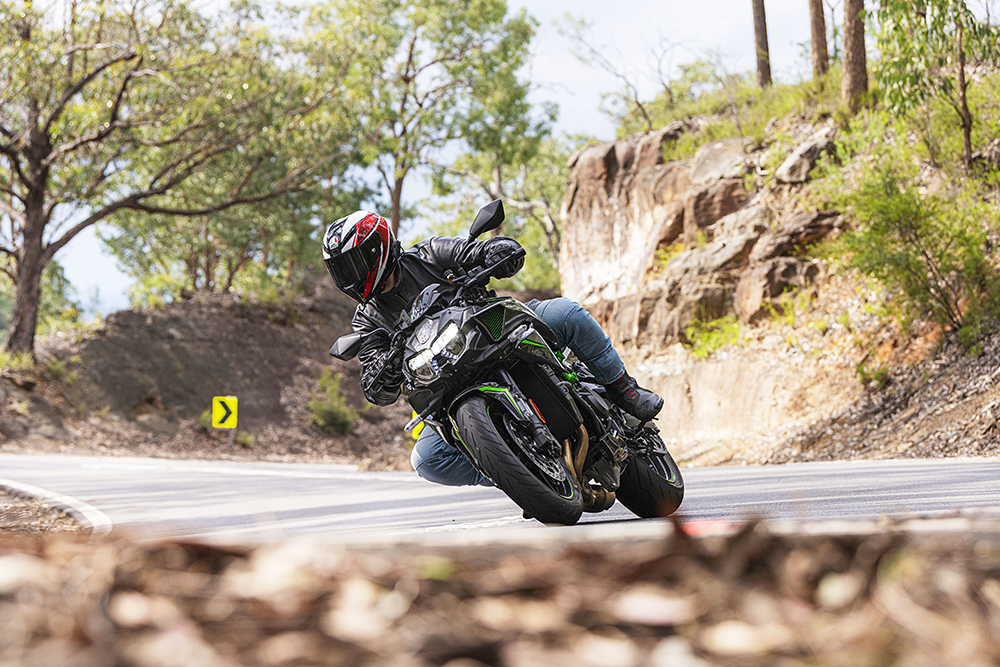 Suspension-wise, the 43mm Showa SFF-BP is right on the money for my weight and speed, it offers full adjustability, but I didn’t need to tinker with it. The Showa rear monoshock is a little disappointing, however. It offers preload and rebound adjustment, the standard preload setting was way soft for my 105kg and it feels mismatched to the front. Rear preload adjustment will require small hands and a miner’s lamp as its buried in the middle of the beefy dual-sided swingarm, and it all adds up to deterring would-be owners from adjusting out the imperfections. Kawasaki has been doing this long enough to know better.

The Z runs LED lighting all round including in that menacing-looking headlight. Low beam is excellent but the transition between low and high beam doesn’t return much of an improvement which may be an issue if you do a lot of night miles.

While on the subject of riding in the dark, I always thought that new back-lit switchblock craze was, quite frankly, a bit of a wank. Then I took the Z for a swift fang at night. It doesn’t have back-lit switchblocks and trying to locate the buttons on the busy left-hand switchblock on a dark country road was akin to fumbling for the light switch on your midnight dunny run. Not a problem on bikes without whiz-bang tech, but when you’re trying to activate the cruise control or a change a riding mode you don’t want to not be staring off into the darkness any longer than is necessary. 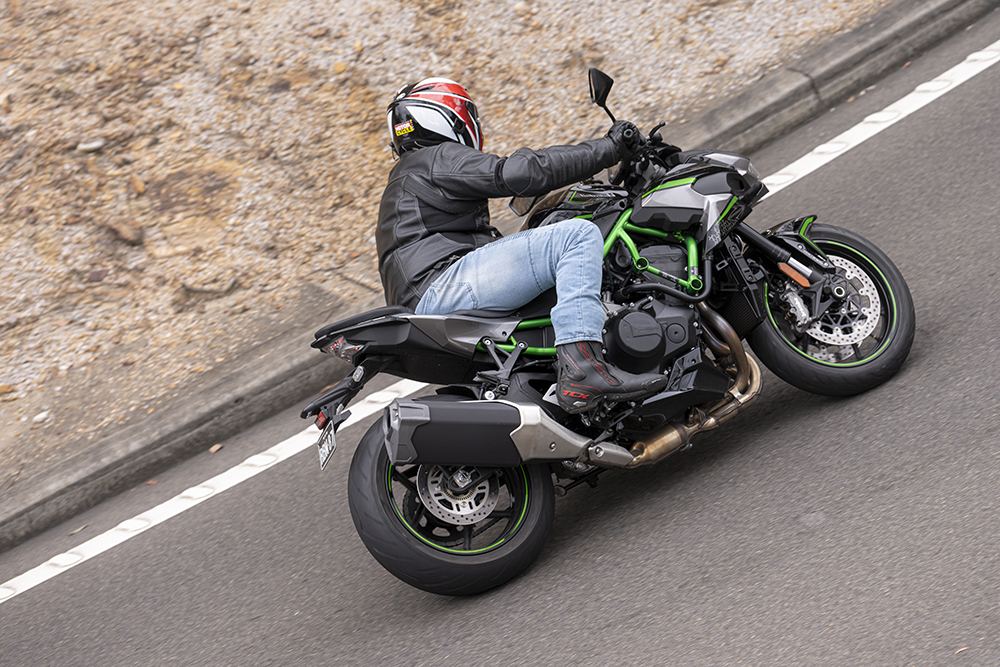 I love cruise control on motorcycles, it lets you worry about riding rather than the cops pinging you for a few kays over and allows you to rest your right upper limb on extended rides. But in my mind, no manufacturer has got the system right yet, but Kawasaki is getting close.

I like its reaction time, it’ll adjust your speed pretty quickly if you start ascending or descending, and the system disengages as soon as you tug on the clutch. Although there’s also two things I didn’t like. One, increasing or decreasing your speed via the +/- button can be hit and miss, and getting back up to speed after resetting to the previous set speed when you’ve disengaged the system takes an eternity. It builds speed quickly enough, but the time between resetting and when the system responds is the equivalent to the average Hollywood marriage.

The Z H2 is unique, and I like that. I kept coming up with excuses to ride the thing the whole time I had it. Like a lot of supernakeds, it’s just all about the engine and Kawasaki has nailed that aspect.

It’s fast – damn fast – and then there’s that noise, that sexy supercharger noise I couldn’t get enough of. As a roadbike, there’s not much to dislike and it bests its H2 sibling in the comfort stakes understandably. Kawasaki has taken the most desirable and exhilarating bits of the H2 and jammed them into a usable and affordable package. And when it’s in its natural habitat, you have very little to complain about and an awful lot to love. 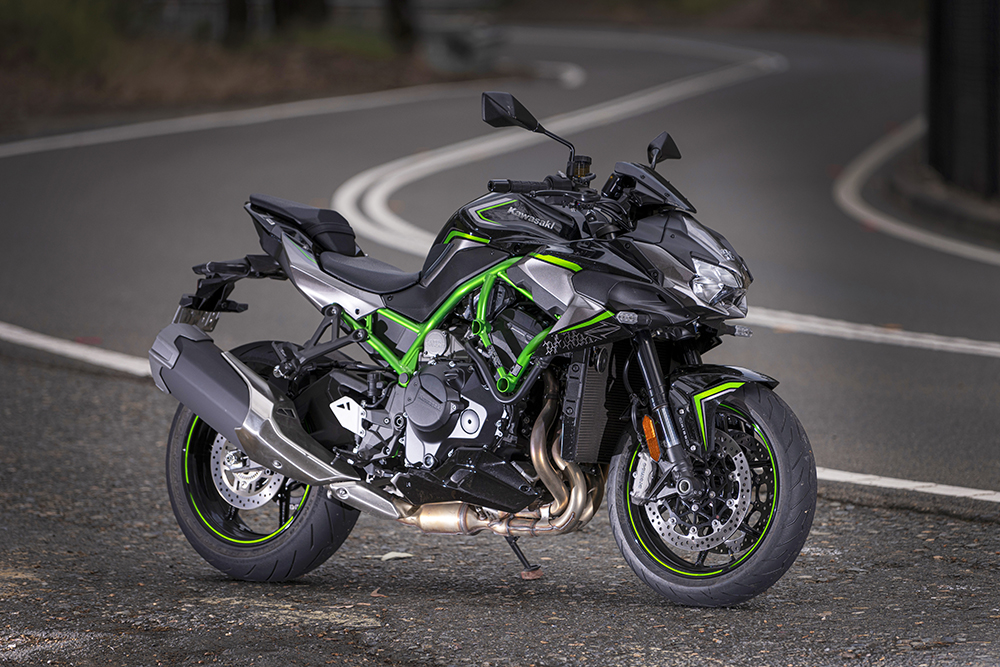