Simply put, Ducati’s new Hypermotard 939 is a weapon. It’s lean and mean, with a healthy dose of thumping power to justify the ‘supermoto on steroids’ look that sets it apart from everything else on the road.

This motorcycle shook up the world when it debuted in the capable hands of Factory rider, Ruben Xaus, back in 2007. It was everyone’s fantasy – a bike that could get the rear wheel sliding around corners and still had styling in spades, but for most it was just a dream. In reality the big bore 1078cc bevel driven beast was too punchy for commuting and impractical for extended periods in the saddle. So Ducati went about overhauling the design in the years to follow with the overall aim of turning this massive motard into a bike that could be equally attractive as a daily ride.

We all know this bike has the potential to turn good law abiding riders into lunatics – its predecessors have demonstrated this time and time again – but does this new model also represent a motorcycle that all of us would be happy live with?

To find out once and for all, I decided to spend a few days in Melbourne’s traffic choked inner-city suburbs before venturing into Victoria’s high country to really stretch the big Duke’s long legs. This year we’ve seen the release of the third generation of Hypermotard, and while it still resembles previous version this model differs substantially in terms of rideability and mass appeal.  In keeping with the motard philosophy the Hypermotard 939 has a tall and narrow profile which is balanced against a light and nimble chassis that weighs in at 181 kg dry. The 16L fuel tank has a respectable capacity that allows a range of over 200km before the reserve light comes on, but the lack of fuel gauge on the model’s Desmosedici GP-styled digital dash was a curious omission considering that Ducati has gone to the effort of incorporating a gear selection indicator this year.
Just like its more race oriented relatives the Hypermotard is bestowed with a ‘Safety Pack’ which consists of ABS and traction control, along with three rider modes (Sport, Touring & Urban) to harness the otherwise hair raising potential of this road-tard. Wheelie control is conspicuously absent from the line-up of ‘rider aids’ which speaks volumes about the Hypermotard’s heritage but also keeps things light hearted and most of all, fun. In dry conditions there’s little doubt that Sport mode is the most enjoyable engine map, but I was impressed with the softer power delivery of Touring mode for commuting in the traffic congested CBD. During the time I spent zipping from A to B I found myself taking advantage of the ride-by-wire technology just because it was so damn easy to switch maps. The short gearing and punchy, full bodied torque that erupts from the 937cc liquid cooled L-twin in full-power mode is a recipe for excitement every time you fire it into life, but you can easily cobble the delivery with the press of a button if need be. Engine maps can be scrolled through by using the toggle button on the switchblock and selected by pressing the indicator button, however this is a little frustrating if you’re in the habit of repeatedly pushing the indicator to ensure the turn signal is cancelled. Nonetheless, the map doesn’t actually switch over until the throttle is closed and the flashing mode icon on the dash makes it easy to correct the habit. If you want to customise the power delivery or ABS/TC settings this can be adjusted with relative ease while the bike is stationary. When I broke free of the suburban shackles I developed a much better understanding of what Ducati was trying to achieve when they re-designed the new Hypermotard 939. It takes considerable restraint (read as maturity) to keep it putting along at low revs in traffic, and I thought I noticed the bike hunting a little when trying to hold constant low-revs in traffic, but this surging issue becomes a distant memory when you start to tackle the mountain roads. The 870mm ride height let’s you corner to your heart’s content while enjoying the relaxed riding position, but still provides plenty of ground clearance to take advantage of the bike’s superb handling. In fact, I was so preoccupied with the comfort and impressive mileage that I must’ve travelled for 2 hours without a break before I realised it was time to fuel up. And when the pace heated up on the back roads it was easy to appreciate the qualities of the high revving oversquare power plant because the bulk of its 70 kW of power and 86Nm of torque is situated squarely in the mid-range right where you want it – a welcome change from most modern super sports that advertise enticing power figures that are all but unobtainable under normal road going conditions.

When you’re flicking your way through the tight and twisty sections of tarmac the Hypermotard’s steep rake and motocrosser style bar comes to the fore, making it a breeze to tip into corners or change direction with the lightest of touches. The ride is quite firm, but this appears to be a calculated decision by Ducati to compensate for the lack of adjustment in the 43mm Kyaba front fork. On the rear the Sachs rear monoshock is adjustable for preload and rebound damping which goes a great distance to setting up the bike for an individual’s weight, style or riding two-up. I also think the Hyper would feel quite at home on track, and while those that gravitate toward this type of riding will likely tip in the extra few bags of sand to acquire an SP model, it’s certainly another string to the bow of this modern cross-breed. The electronic rider aids (TC and ABS) really came in handy when I realised I’d picked the wrong day to climb the mountain and was greeted to a thick blanket of white snow nearing the peak. Even when I threw caution to the wind in an effort to catch the traction control out it presented as a barely noticeable reduction in drive and didn’t upset the balance of the bike. Likewise, for the switchable ABS – it was non-intrusive and significantly reduces the risk of locking the front or rear when navigating dynamic and slippery conditions.

The standard model is shod with Pirelli Rosso Corsa’s which heat up quickly on the shoulder and are suitable for tackling rain, hail or shine. They offer loads of front end feel and complement the Brembo Monobloc’s that have a reassuring bite and a powerful but progressive feel at the lever. The hand guards complete the aggressive off-roader look and, along with the large luminous LED indicators incorporated into them, provided good protection in the cold conditions and excellent street presence that prove they’re not just for show. Of course, with its stubby front cowl it is completely unprotected from the majority of buffeting wind so if commuting long distances on open highways constitutes a large portion of your riding you may want to consider investing in the heated grip option, or take a closer look at the Hyperstrada 939. 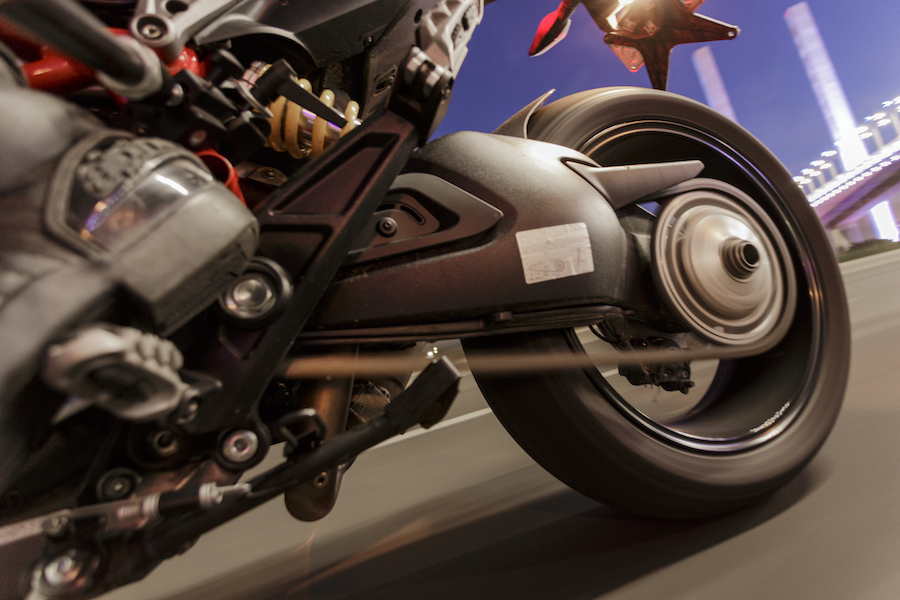 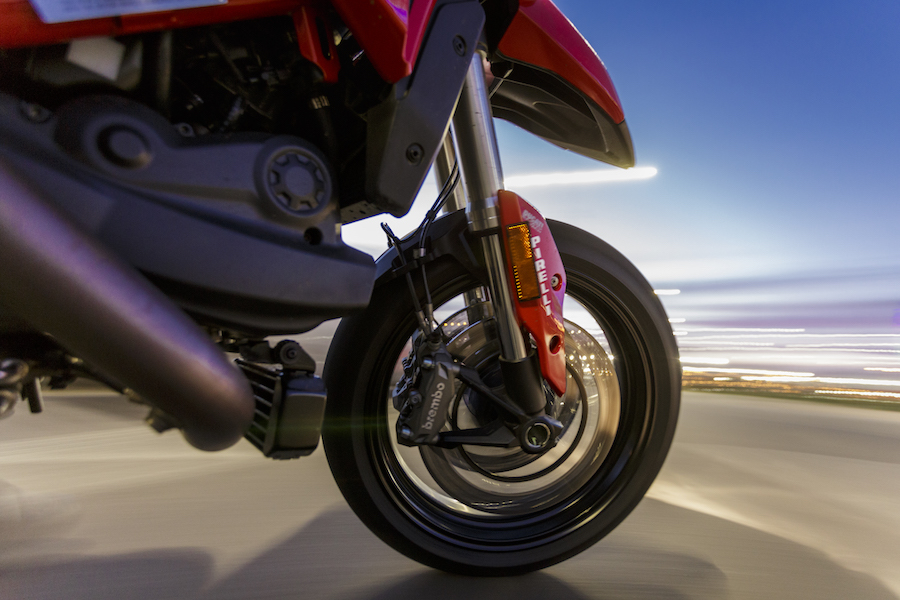 The shortfall of the test model we rode felt to be the gearbox – it was notchy when commuting, and more often than not I struggled to find neutral after coming to a stop. That said, this is not an unusual trait among Italian motorcycles and although unpleasant, it doesn’t actually mean that a transmission rebuild is imminent.

After giving this bike a fairly thorough test as a daily commuter I can confirm that it’s one of the best bike I’ve ridden from A-B, and that was something I wasn’t anticipating. It’s fun and frivolous but far from uncomfortable or impractical. The Hypermotard 939 will definitely give mid-sized supersport bikes a run for their money in the hills, and also offers a unique design that justifies the $17,790 price tag. Ducati has come leaps and bounds ahead of its predecessors with their new big-bore roadtard, and this is one motorcycle where you should believe the hype.