Ever since the debut of the current Africa Twin there have been rumours that Honda will use its compact, lightweight engine in more models. Now there’s added emphasis to those whispers with the appearance of a spate of patent applications showing the 1084cc DCT twin in a Rebel-style bobber.

The patents themselves revolve around relatively dull elements of the bike – the rear shocks and the relationship between the engine mounts, radiator and exhaust headers – there’s no question that the pictures show the semi-automatic, twin-clutch version of the Africa Twin’s single overhead cam engine bolted to a tubular steel, cruiser-style chassis. Boring though their subject matter is, the patents add to suspicions that this is a serious project; they specifically relate to the Africa Twin engine design, to the steel tube frame and to the twin-shock chassis, so there’s no chance that the drawings are a red herring.

The Africa Twin’s 75kW, 1084cc, SOHC engine might have been designed for an adventure bike but it’s remarkably well suited to a cruiser. While its peak power is moderate for its capacity, it’s compact and lightweight and pumps out plenty of low-end torque. For riders of the existing Honda Rebel 300 or 500 models, looking to step up to a larger machine, an Africa Twin-powered bobber could be a tempting solution. 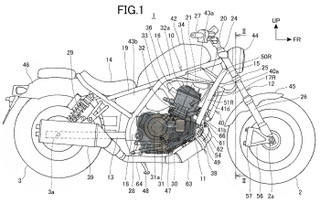 The DCT transmission is a further draw. It’s clearly shown in the patents, which illustrate not only the hydraulics of the twin clutch mechanism but show the bike with no gear shifter or clutch lever on the left bar. Of course, Honda also makes a manual version of the engine, so a conventionally-shifted model is also likely to be offered.

In terms of appearance, the bike’s silhouette is familiarly Rebel-like, with the seat split into separate rider and pillion sections, bisected by a hoop of the seat subframe. The low-mounted headlight and humpbacked fuel tank are more Rebel cues. New, though, are the radial brake calipers and the big, dual-exit exhaust silencer, both reflecting the bike’s larger engine and increased performance.

While there’s currently no indication that Honda will add the Rebel 1100 to its 2021 model range, the patents leave no doubt that such a bike is being worked on. It might still take a couple of years before it’s ready for production, even if it has already been given the green light by Honda management. However, with bikes like Triumph’s Bonneville Bobber showing that there’s an appetite for large, parallel twin-powered cruisers, it makes a lot of sense for Honda to make a machine like this.

We’ve already seen that the Africa Twin is being considered for other models. Earlier this year Honda filed patents for a naked roadster with the same engine. Just as the Honda CB500’s 471cc twin also appears in the CB500X adventure bike and the CMX500 Rebel, it makes sense that the Africa Twin’s larger engine eventually appears in a similarly wide range of bikes. 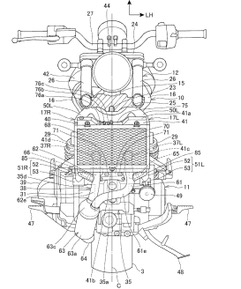