True fans of the Dakar Rally will longingly remember the era of the late 1980s and early 90s when ground-pounding dinosaurs plundered the endless sand dunes of the deserts of remote North Africa.

Bred in captivity, these hand-reared beasts – which featured booming twin and four-cylinder powerplants of up to 1000cc shoe-horned into long travel skeletons – ultimately spawned road-going replicas that instantly began thundering around the most far-flung reaches of the globe. And they did it bearing such exotic names as Africa Twin, Adventure, Dakar, DR Big, Elefant, Rally, Super Enduro, Super Ténéré, Ténéré and Tengai, to name but a few.

Then, a decade or so later, the beasts were as good as extinct. They were legislated out of the Dakar Rally and replaced by smaller but just as exotic creatures of 690 and then 450cc capacity, but which have remained accessible only to the privileged few. The days of the Dakar Rally racebike road-going replica have been long gone … until now.

Surprisingly, it is not KTM, the brand which has dominated the famous event since 2001, that has breathed life back into the Dakar replica segment. Instead it is Honda, who for the past five years has tipped untold millions of dollars into attempting to wrestle back the Dakar crown after a 23-year absence following their fifth and last win in 1989.

And while Honda’s latest race campaigns have been fought with the specially built, exotic CRF450 Rally racebike, this new age of Honda Dakar replica is but a pint-size 250 thumper dubbed the CRF250 Rally, which looks all the world like a scaled-down version of the brand’s potent Dakar racer … but as the old saying goes, looks can be deceiving. The CRF250 Rally is actually based on Honda’s much updated 2017 model CRF250L and CRF250LA ABS trailbikes, and slots into Honda’s adventure bike range at the opposing end of the scale to the popularly received CRF1000L Africa Twin. Like the Africa Twin, the 250 Rally is well specced and sharply priced, two traits that will go a long way to giving the Red Riders another strong performer on the showroom floor.

Powered by the same single-cylinder, liquid-cooled, DOHC, four-valve, 250cc EFI motor as that in the 250L and 250LA ABS, the 250 Rally puts out 18.2kW at 8500rpm and 22.6Nm at 6750rpm. They are hardly earth shattering performance stats if you’re coming from a larger capacity bike, or even a modern-day 250cc four-stroke motocross or enduro bike, but the 250 Rally is Euro 4 and LAMS compliant and those figures are up on the previous 250L model, thanks to EFI, throttle body, airbox and exhaust upgrades for 2017. A 43mm Showa USD fork is fitted to the 250 Rally and while it has the same 250mm travel as the L models, it has 50mm extra overall length, with one fork leg housing the fork spring and the other providing damping control. The fork’s spring rate and damping are specific to the 250 Rally. Out back, the 250 Rally’s ProLink single shock delivers 265mm wheel travel, 25mm more than the L models. Shock spring preload is the only suspension adjustment available.

The 250 Rally is equipped with ABS, which can be switched off to the rear wheel via a button near the dash. In other international markets a non-ABS 250 Rally is offered, but here in Australia only the ABS model is available.

The 250 Rally’s Dakar-inspired styling is obvious and matches the look of the 450 Rally racebike with its red, black and white colourway. The number of fairing panels, bodywork, skid plate and side panels is extensive, and these are held in place by a myriad of button head hex bolts, Phillips head screws, clip fasteners and industrial Velcro. Beneath all that bodywork you will find a single radiator on the left side of the fuel tank, a viscous paper-type air filter in the airbox under the right panel, and a 12V battery under the left panel. The rear of the left panel is lockable and hinges down to open and give access to a storage space big enough for the standard tool kit, a spare inner tube and an energy bar. So what’s the CRF250 Rally like to ride and live with? Does the seat-of-the-pants experience live up to those killer Dakar racebike replica looks? 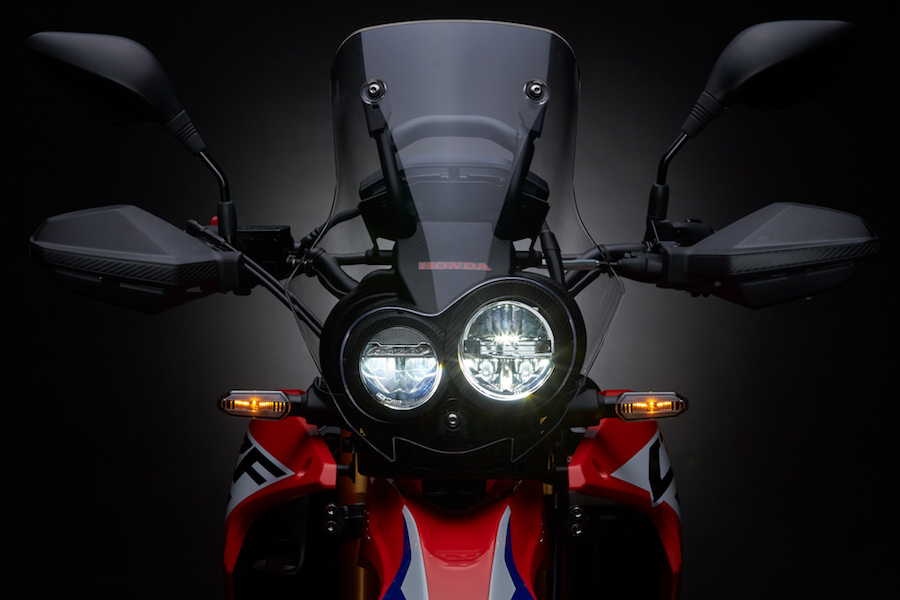 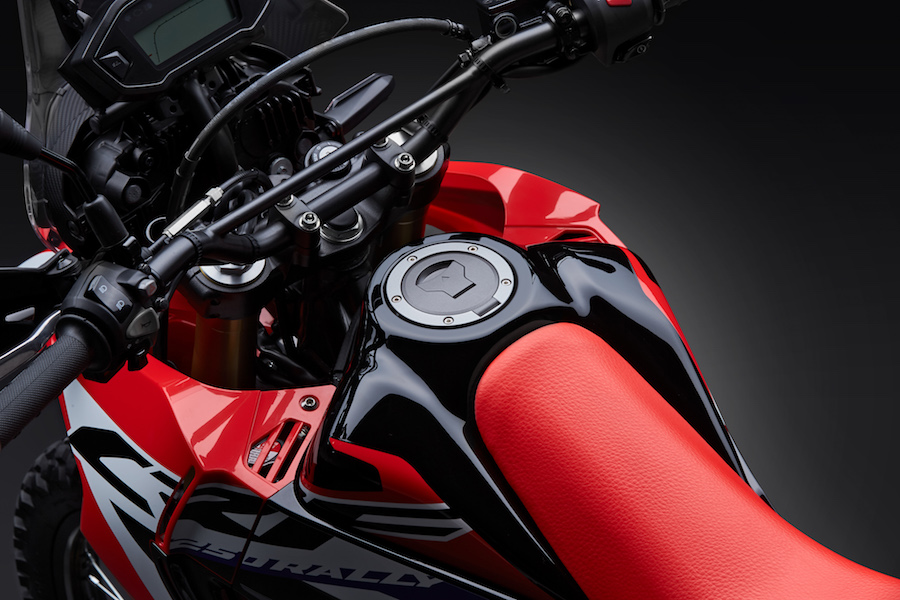 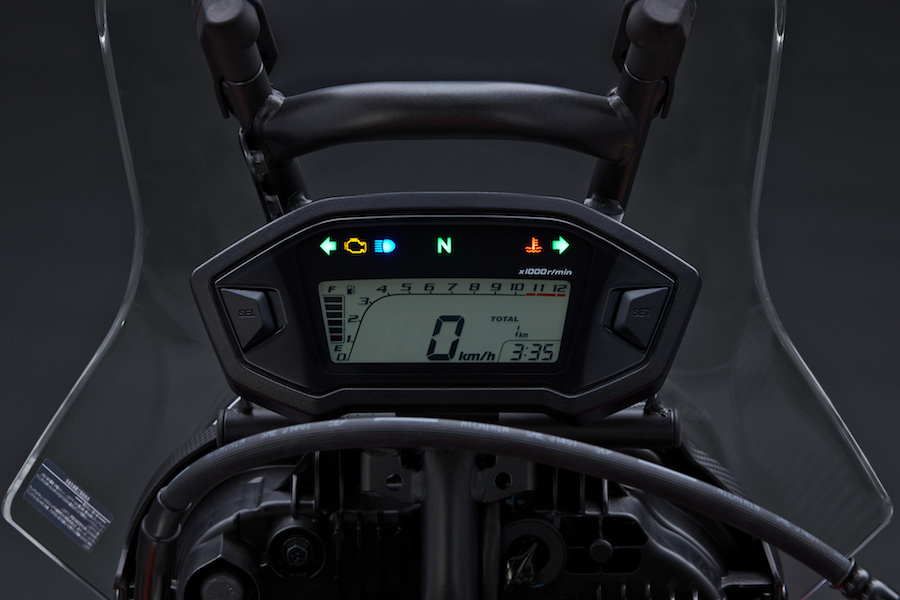 Our test bike arrived from Honda brand new, with zero kilometres on the clock, so our first 400km ride was spent running it in and careully keeping the revs low, which left us scratching our head and asking where the power was. Seriously.

Based on the CBR250R motor, the 250 Rally needs a fistful of revs before it starts to get up and go – we’re talking about 6000rpm and up. Just bear in mind the amount of go it delivers is relative for a 250 trailbike, not a 250 motocross or enduro bike – 18.2kW is well short of what any performance-oriented 250cc off-road thumper delivers these days. And that little engine has to propel 157kg of machine, plus rider and load, so it’s got a fair task ahead of it.

To get the most from the 250 Rally’s donk means giving plenty of attention to the throttle, clutch and gearbox and keeping the revs up. To us that is actually kind of fun, be it in the dirt, on the road, or even cutting through the commuter traffic, but to others it might be hard work, especially those with limited riding experience. There’s not a lot of grunt to fall back on when the revs drop. 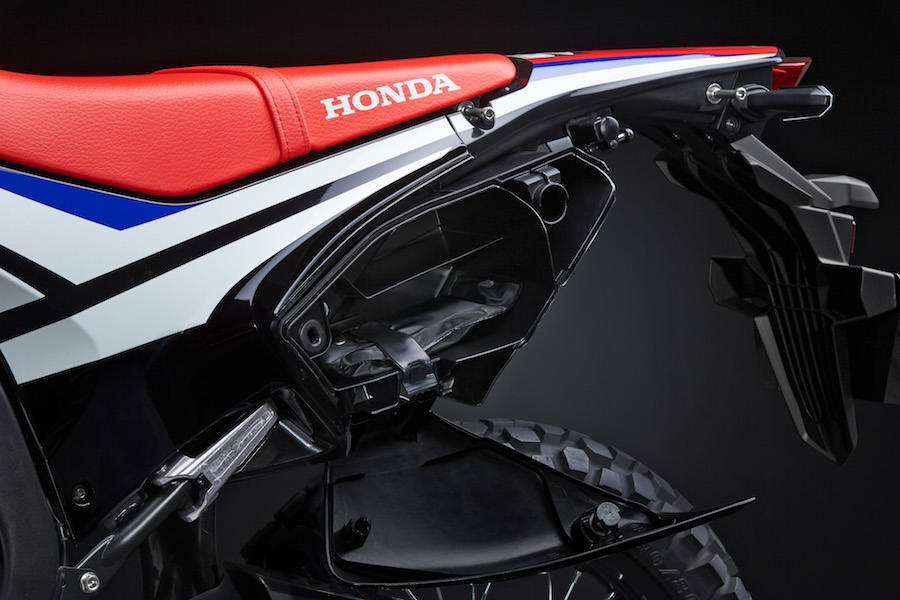 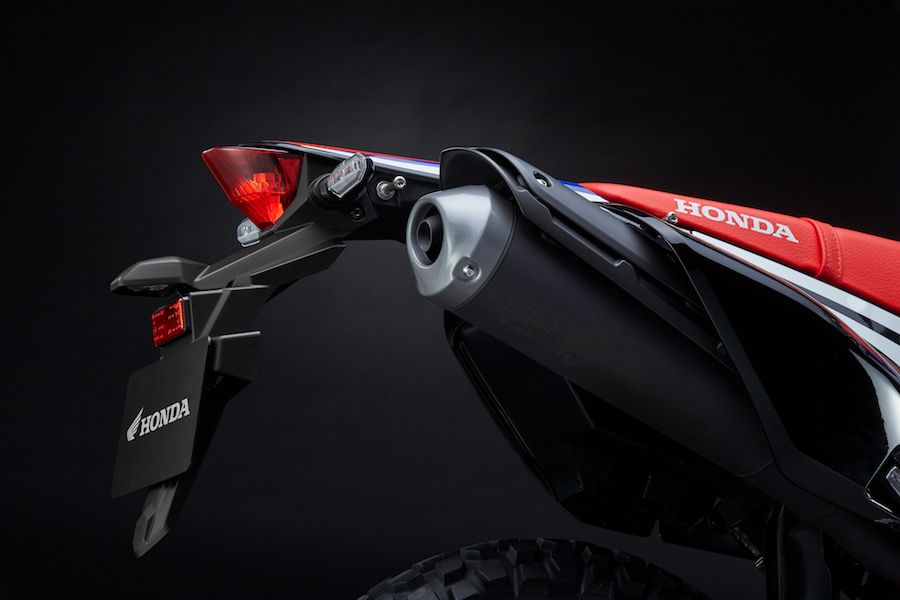 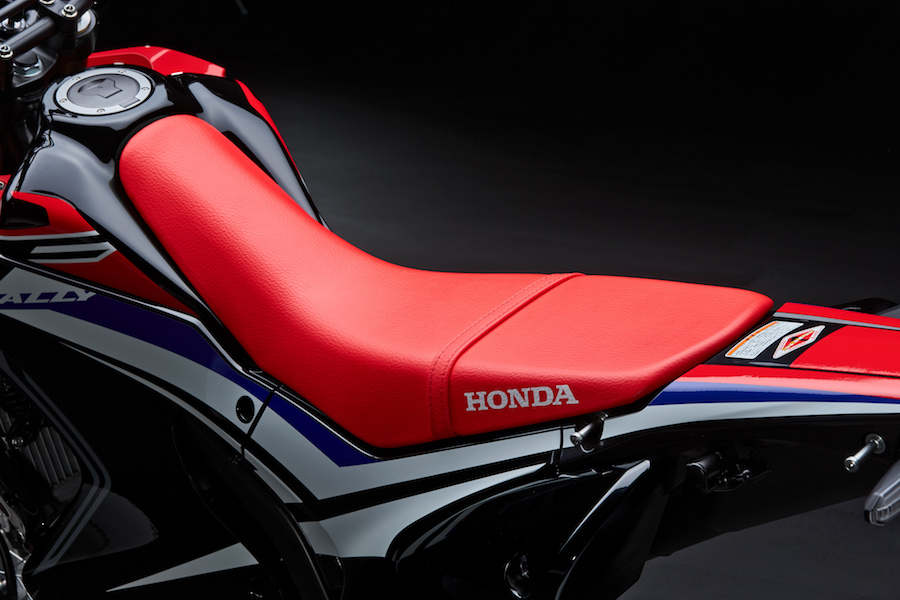 The six-speed gearbox has a wide spread of ratios, and when combined with the tall 14/40 final gearing, top gear gives an indicated 115km/h at around 7000rpm (redline is 10,500rpm) on the highway, by which time the vibes through the frame and tank are starting to get noticeable and you begin to wonder just how long you should keep up the sustained high revs. But these days engines like these are made to withstand prolonged high-speed running, all while offering long service intervals. In the bush, first gear is low enough to conquer steep hills, especially if you’re prepared to hit obstacles with plenty of revs dialled on and a stop-for-nothing attitude.

In the traffic the 250 Rally sits tall and offers good visibility, while also being big enough to gain some level of respect from other road users. They certainly won’t hear you coming, for the stock steel muffler is whisper quiet, but there’s a reasonable chance they will see you. The light clutch action, sweet shifting gearbox – which only got better after the bike’s first service – and compliant suspension and tidy ergos all help to make the 250 Rally a fun mount around town, so long as you aren’t shy with the throttle. The suspension certainly is soft by dirtbike standards and the front end dives under heavy braking on the tar. In the bush on fire trails and

4×4 twin tracks, you need to be careful with line selection to avoid the biggest hits and g-outs, for the travel at both ends will fast be consumed, especially if you’re punting hard and/or the bike is loaded up with luggage. Gravel backroads and sweeping trails are what this bike is designed for; an actual Dakar racebike replica it is not. Like we said, looks can be deceiving.

Despite that hefty 157kg weight figure, the 250 Rally carries it well. The weight of the front subframe and screen/lights/dash is noticeable, even more so in the dirt with the front suspension being so soft, but overall the bike’s steering is light and it is a fun ride in the bush. It’s actually a joy to flick around compared to 200kg-plus multi-cylinder adventure bikes.

The Rally’s sizeable 296mm front brake is a good one, with plenty of typical Honda feel and stopping power – until you hit a long, loose and rocky downhill that starts to tie the ABS in knots and you momentarily lose braking power just when you want it most. On the tar and on gravel roads the ABS is fine, but on the trail we rode with the rear ABS switched off, and wished we could have done the same with the front. 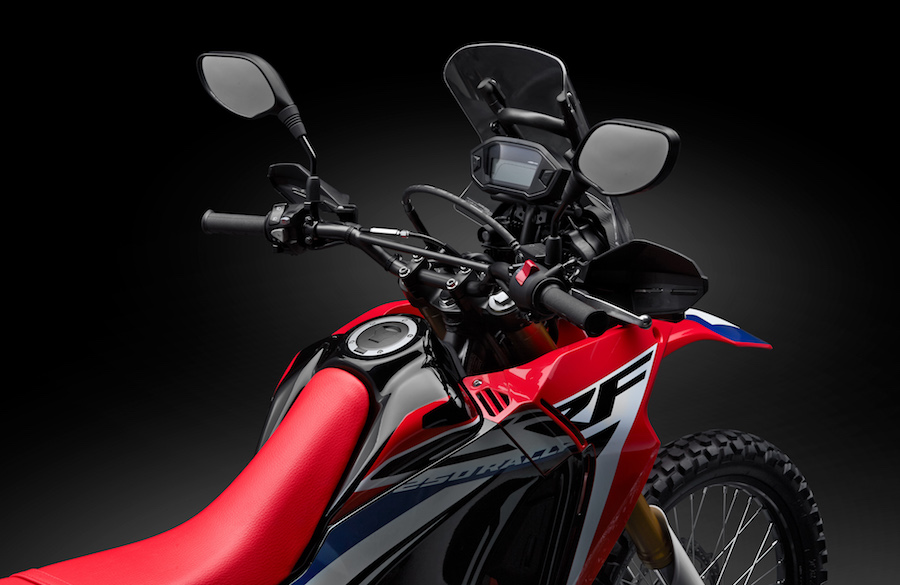 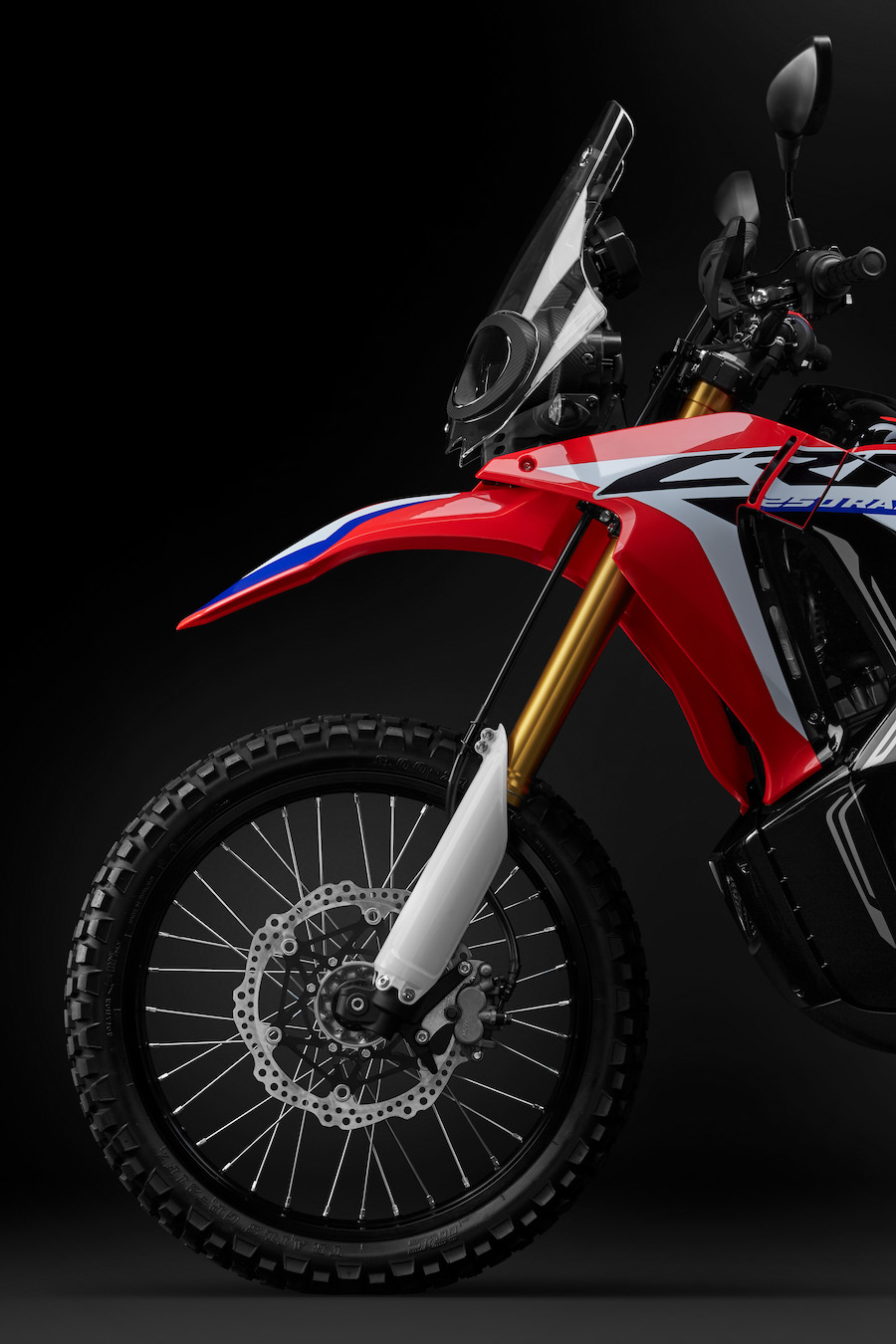 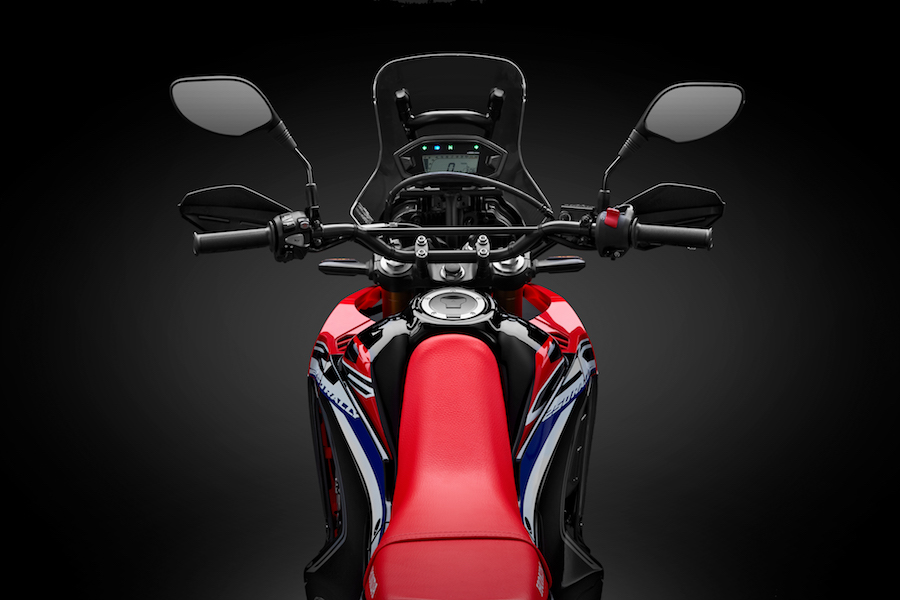 Wind protection from the screen is good, and punching out long transport sections is entirely doable, though we did find ourselves tucking in just slightly below the top of the screen. The seat also gets soft after a few hours, especially if you slide back a little to help tuck in behind the screen. Just remember though you will be covering long transports at much lower speed than big-bore and multi-cylinder bikes, so the 250 Rally will take a little longer to get there.

Over the week of our 1000km test ride the 250 Rally sipped fuel at the rate of 3.23 litres per 100km, giving a range of just over 300km from the 10.1-litre tank. With a full luggage load and a headwind, expect that range to be shaved somewhat, making us wish Honda had blessed the bike with a bigger fuel tank, for there is certainly plenty of space in all that Dakar inspired bodywork to have done so.

All up, it’s clear the CRF250 Rally is way more suburban warrior and weekend adventurer than the Dakar racer it looks like. To be a true Dakar replica it needs another 200cc at least, more fuel capacity, and much upgraded suspension; then all us dirt-biased Aussie adventure riders would have something to start frothing at the mouth about. Is a CRF450 Rally really so much to ask for?

As it is, the CRF250 Rally will find a ready home with riders wanting the Dakar look from a bike that is well kitted, sharply priced, robustly built and that will let them get a confidence-inspiring taste for adventure. And with more small-bore adventure bikes on the way, in the shape of the Kawasaki Versys X-300, BMW G310GS and the long-rumoured KTM 390 Adventure, this corner of the adventure riding world is only going to keep growing. 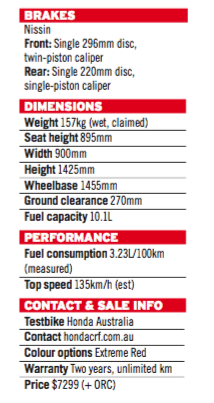