I’ve never been to Africa, but I could do Australia on the Honda Africa Twin Adventure Sports DCT

The first thing to go through my head when I sat on the Honda Africa Twin Adventure Sports DCT was ‘where the hell is the clutch lever?’, closely followed by my foot stabbing around in thin air looking to select a gear. An automatic adventure bike is definitely alien at first, but after a couple of rides, it all starts to feel quite natural. 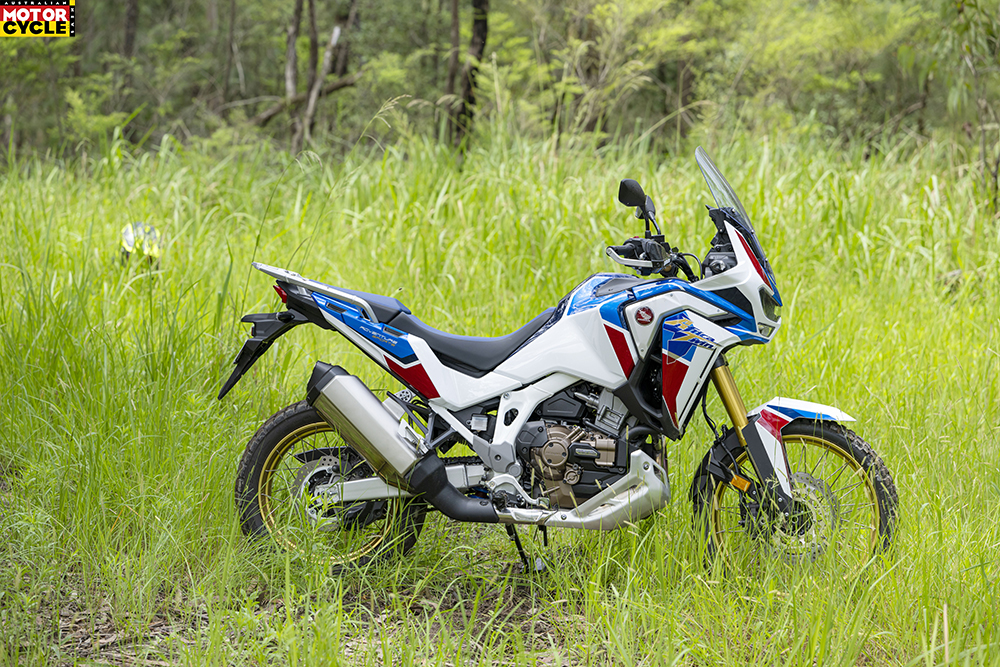 The Africa Twin is a daunting machine. The screen is high, the fuel tank’s wide and there are enough displays and buttons to launch a rocket. 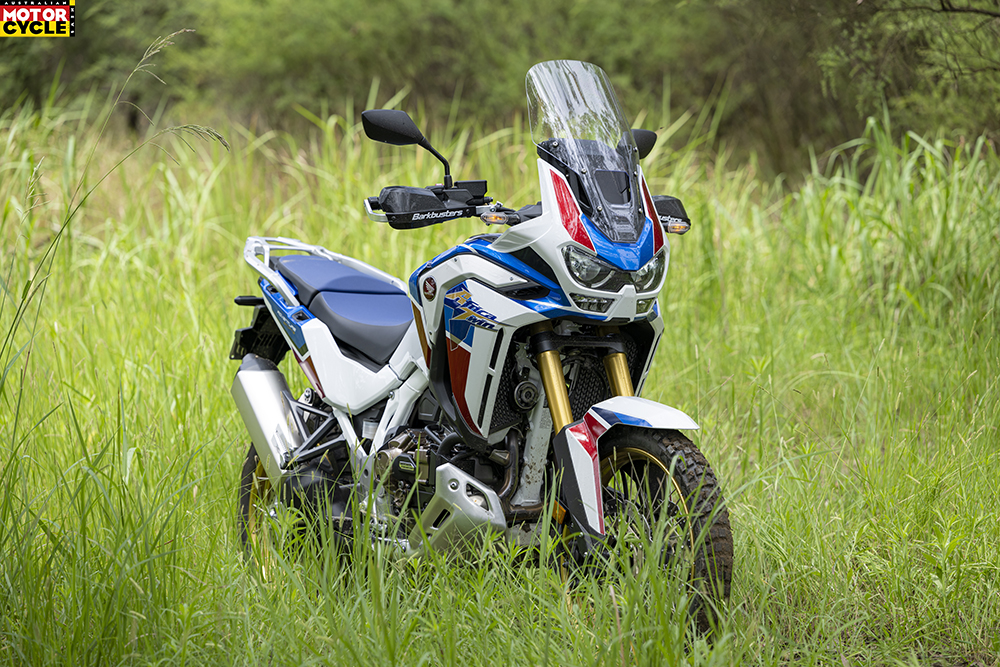 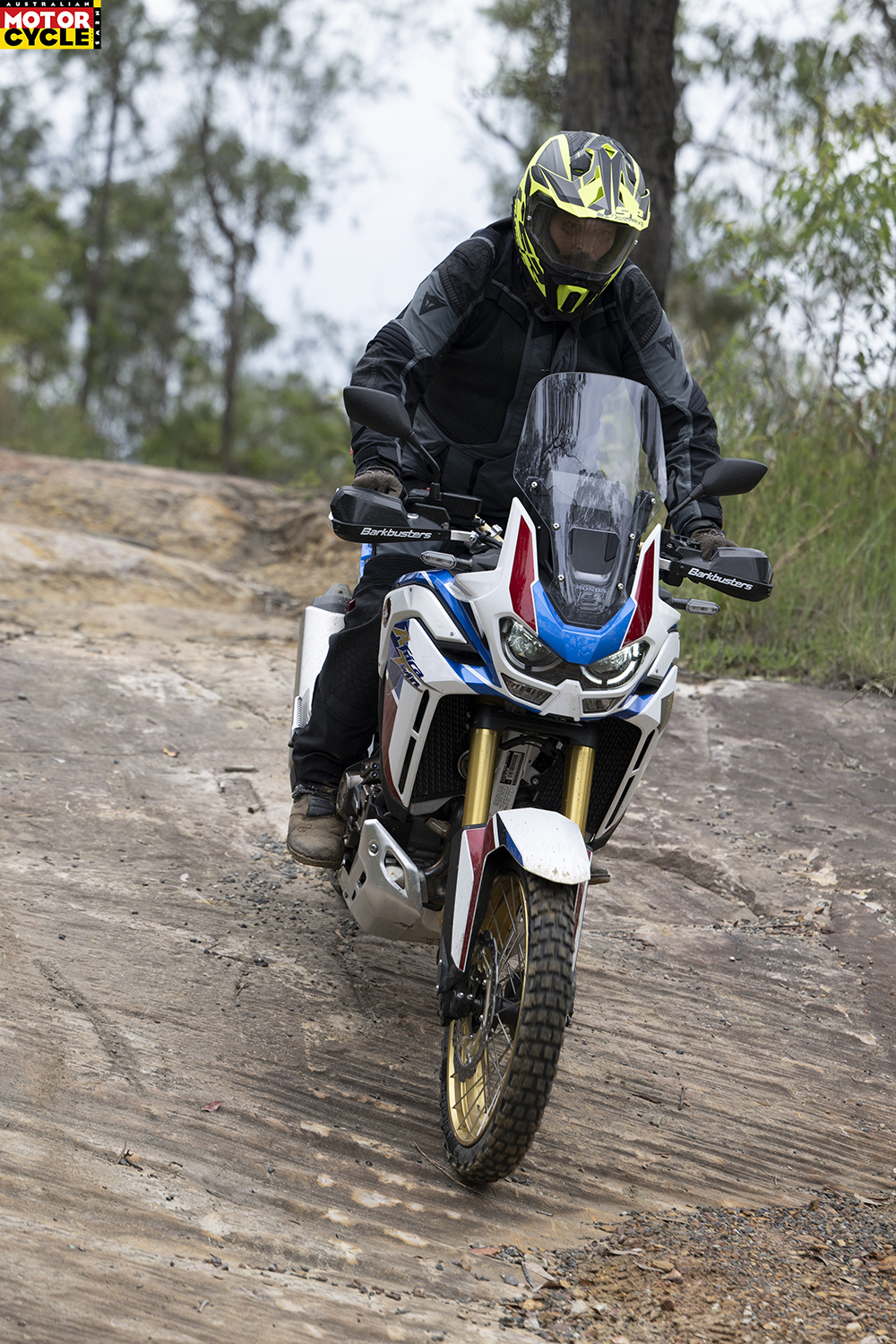 On the road the 1084cc parallel-twin thumps away with a decent exhaust note, thanks to the 270-degree crank. As long as you’re in manual mode, it delivers decent torque down low in the revs, otherwise it will kick back a gear or two if it feels you want to go faster. The torque curve is very flat with linear power all the way to max revs. With 75kW (100hp) available at 7500rpm and weighing in at 248kg, the big twin gets along at a respectable pace on the bitumen. When things get dirty, the parallel-twin is ideal for finding traction in the dirt and the flat torque curve means you can belt along in just about any gear. There is enough power on tap to pop the front wheel over obstacles in the bottom two gears and enough to power slide the rear for days in the gravel. When riding more technical terrain, activating the G mode makes the clutch grab harder for bursts of torque to be sent straight to the rear wheel in order to pop a wheel up over a log or regain balance if you’ve been thrown off course by a rock or rut while standing up on the ’pegs. 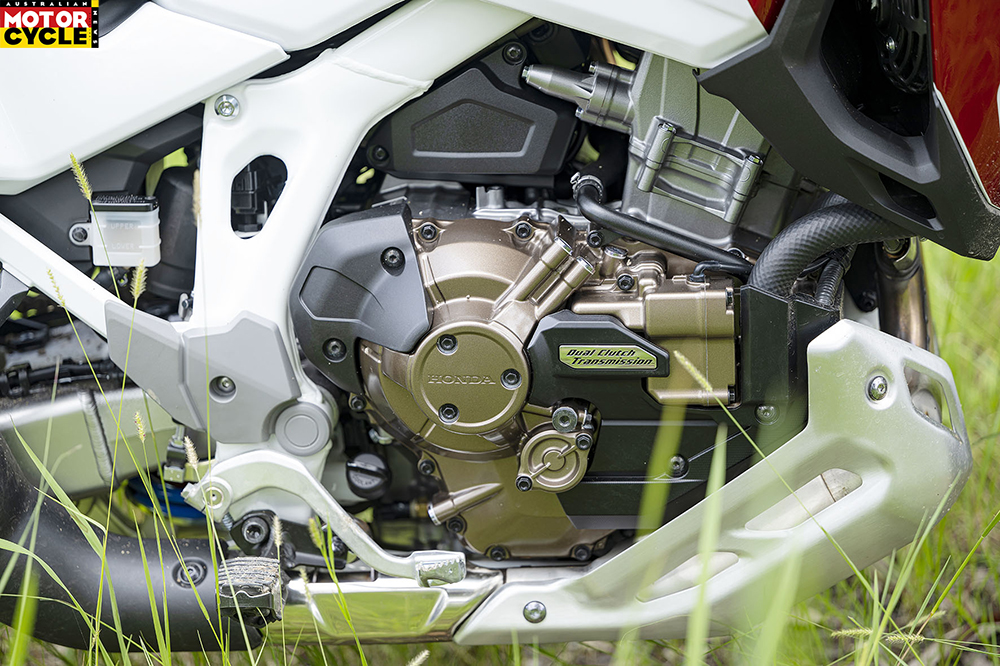 Honda has used dual-clutch transmissions since 2010, so it is a known quantity and has proven its reliability. The system works with two clutch packs, one for gears one, three and five, and another for gears two, four and six. So while you are riding in third, the gearbox already has fourth gear engaged and ready to switch by opening one clutch and closing the other creating a practically seamless gear change. So good in fact that dual-clutch transmissions are banned in MotoGP. 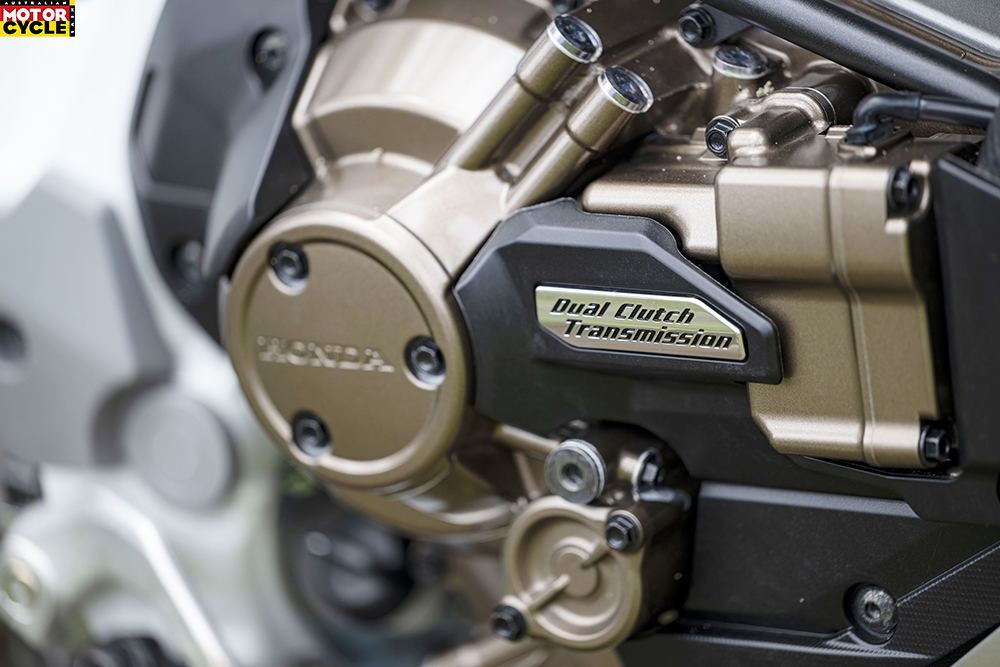 Selecting your preferred transmission mode to suit your riding style is a must with the DCT and there are a few to choose from. The normal D mode will have the engine running low in the rev range being very lazy and upshifting as soon as possible to maximise fuel range and have the smoothest ride. S mode has three levels to choose from; my most preferred was S1 as it would keep the revs up a bit while cruising rather than chugging the engine, and it downshifts earlier when braking allowing you to take advantage of the engine braking. S3 is for cutting sick up your favourite back road; the bike will keep revs high and downshift like a racebike into corners which is a laugh a minute, but it’s a bit too much when riding sedately. Obviously S2 is halfway between the two. 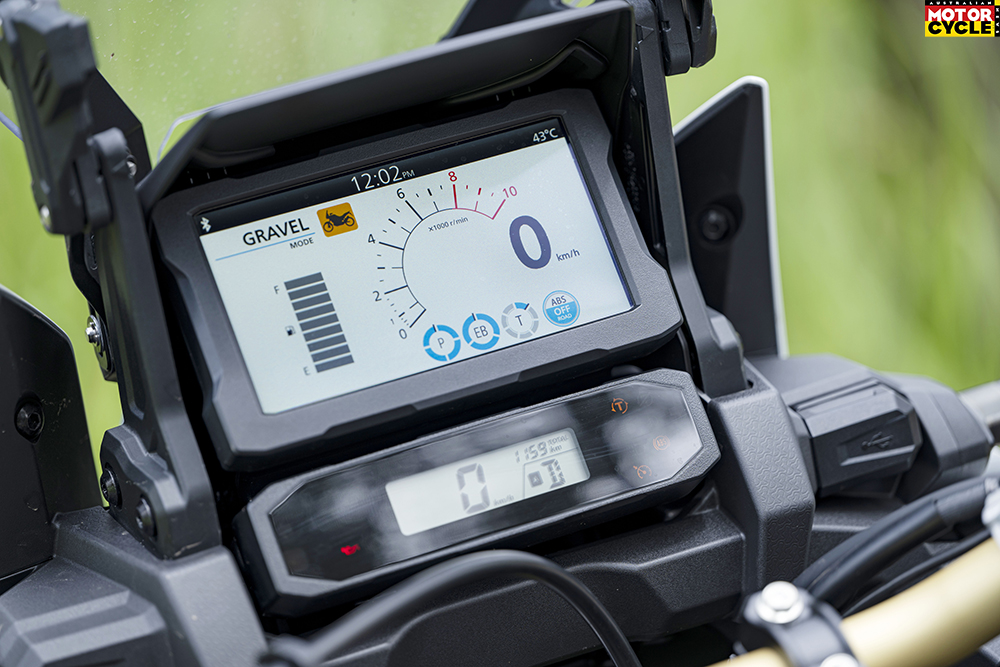 The Africa Twin has more settings than you could poke a stick at and working your way through the 6.5-inch full-colour TFT touch screen can feel like a minefield. So much so, that Honda has a website that has a simulation dash to practice on. The four main modes are Tour, Urban, Gravel and Off-Road plus there are two user modes to set up as you like. Within each of these modes you can adjust power, torque control (traction control), engine braking, the G setting and ABS mode. If you can’t find a set-up to suit your needs, maybe it’s time to reassess your choice of hobby. 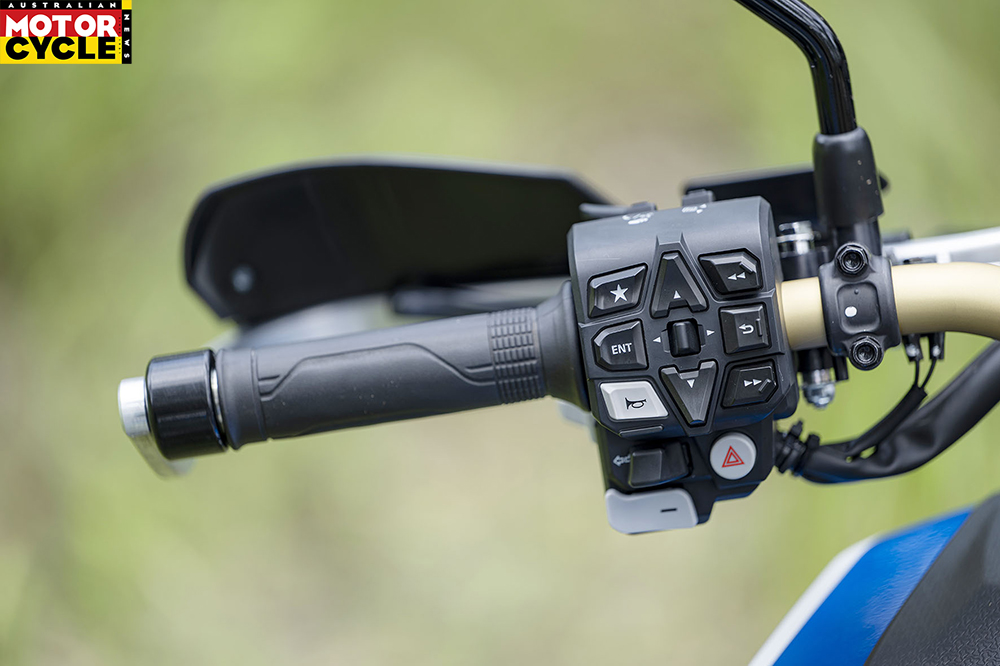 The same dash controls your cruise control, heated grips, phone connection, headset connection and Apple Carplay. I tried to connect my Android phone to the system but it would not play ball. Android users will have to wait for the next update for Android Auto. Nestled below the main 6.5-inch screen is a smaller LCD screen displaying vitals like speed, gear selection and warning lights, while the top screen can be used for navigation. 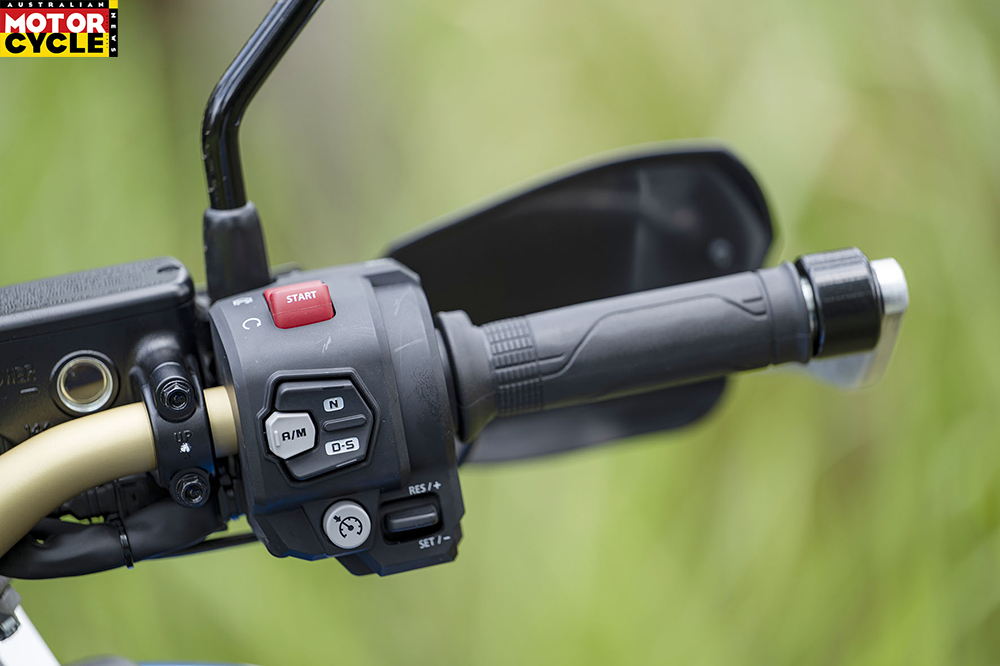 Meant for covering large distances, the Africa Twin is pretty darn comfortable. The relaxed and upright riding position and wind protection is right up there. The seat is shaped well and can be fitted in two positions without the need for tools. My legs want the seat in the low position, but my eyes want the high position as I battle to find the perfect seat/screen combination. 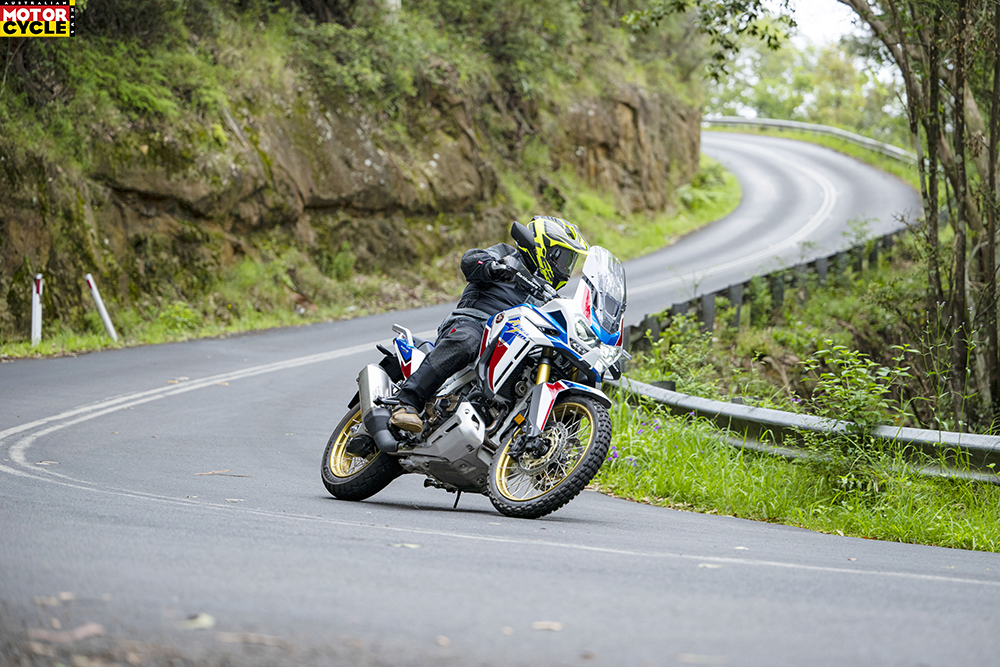 I’m 175cm tall and, with the seat in the low position I can’t see over the screen and have to look through the top of it. This isn’t a major issue on the road, but once the screen gets dirty it’s terrible to look through when you’re riding off-road and you need to assess the terrain ahead. Standing up on the big twin is natural feeling with the tank and seat shaped well for gripping with your knees. Make sure you remove the footpeg rubbers if standing is your jam. Your pillion gets a decent deal here too with a large grab rail and comfy seat. The rear subframe has mounting points ready to accept the genuine accessory luggage too. The rubber-damped ’bar is wide and high with handguards fitted as standard. Our test rig was fitted with up-spec Barkbuster guards which are a bit more rugged. 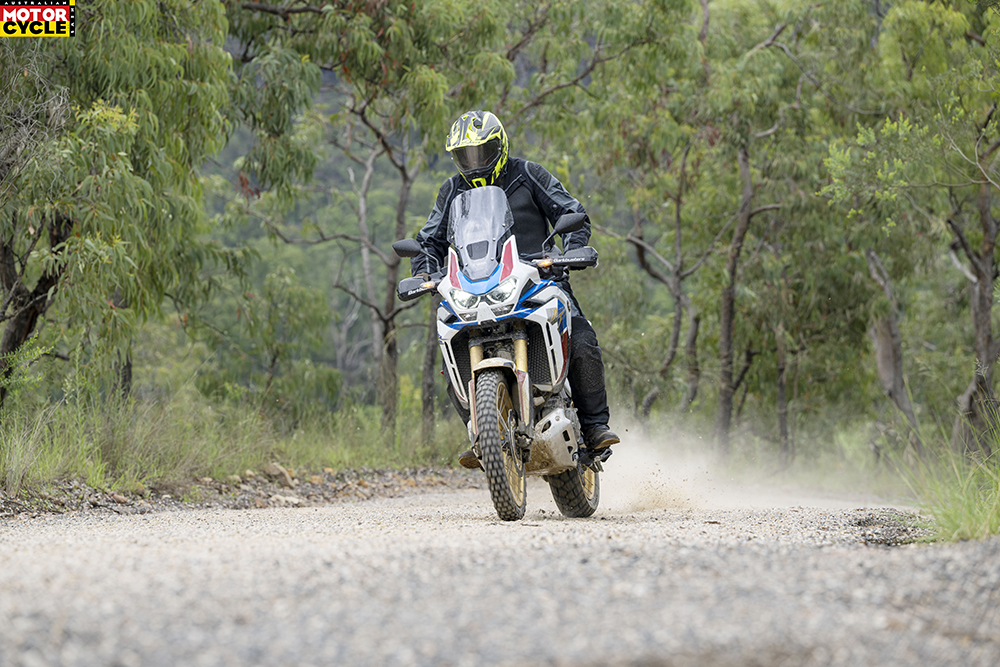 Thanks to the 21-inch front wheel and 18-inch rear, the handling is pretty relaxed rather than trying to fall into corners. Our test rig had an Anakee Wild tyre on the front and a normal Anakee on the rear, so the front-end felt a bit mushy on the road compared to the rear. This being a midrange spec, it is fitted with manually adjustable suspension rather than the electronic gear. The base setting is a compromise for a mix of road and dirt. It’s fairly soft so I only wound a bit of preload onto the rear via the knob to compensate for my above-average weight. The suspension eats up bumps for breakfast on the dirt. But I find it to be a bit soft on the road. Adjusting the clickers is simple with a flat-blade screwdriver found under the seat but once again, it is a compromise if you like to ride a mix of dirt and road. The Nissin brakes are well and truly up to the task. There are three modes of cornering ABS to choose from – road, off-road and off-road with the rear disabled. There is decent feeling from the front on the dirt and enough bite to pull up swiftly on bitumen. 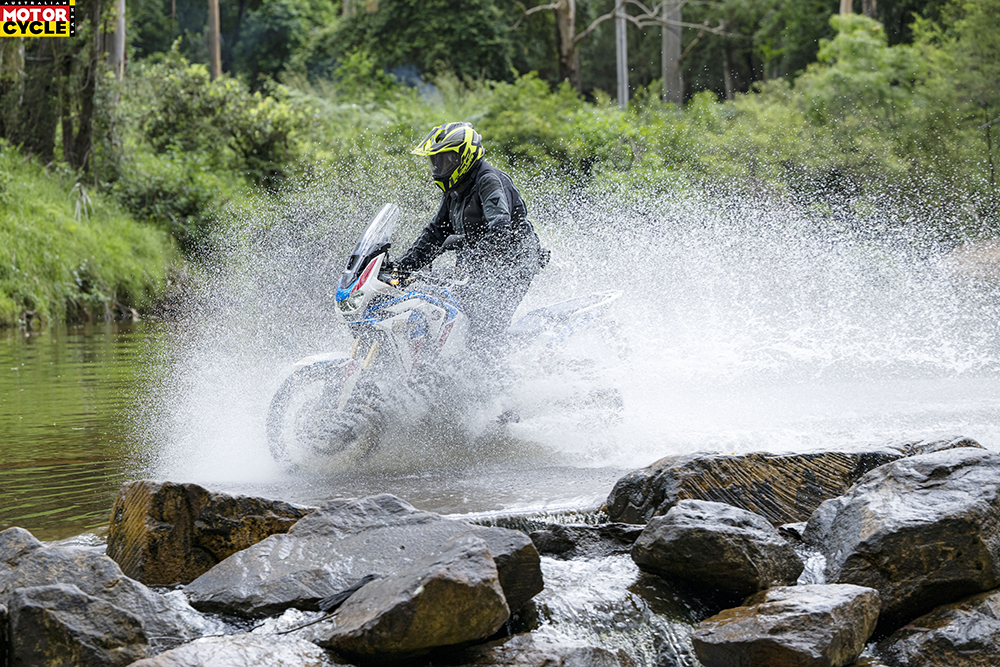 The 25L tank is plentiful for touring. I measured its consumption at 5.2L/100km. So you would get over 400km per tank safely. And comfort is outstanding to match the fuel range. 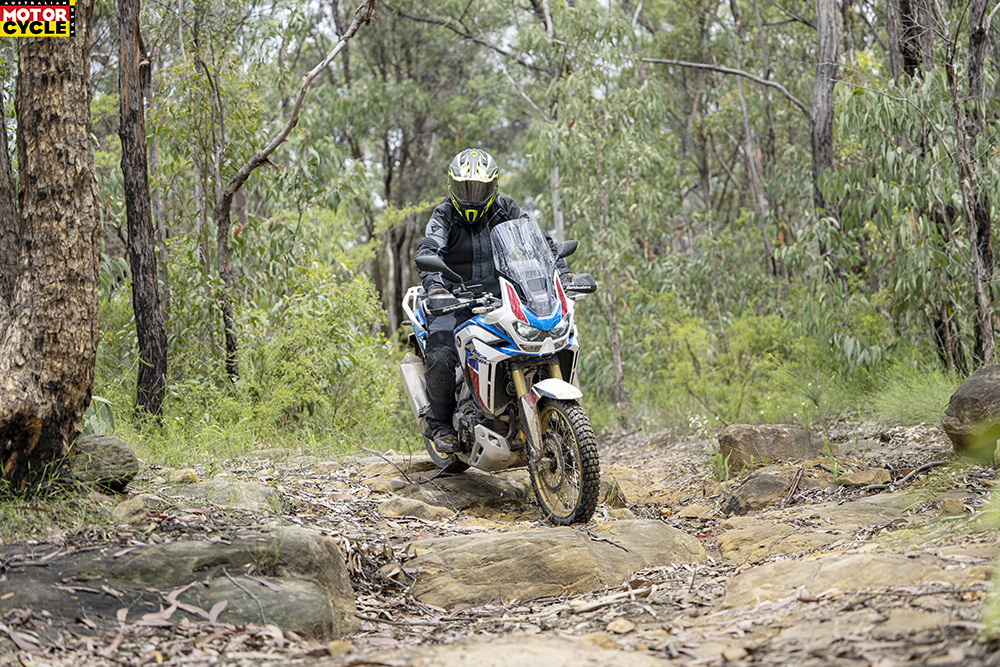 The Africa Twin Adventure Sport costs $25,649 ride away, which is decent value for the sheer amount of tech it comes loaded with. Compare it with a similar spec BMW R 1250 GS Adventure starting at $28,365 and the Africa twin is right in the game. 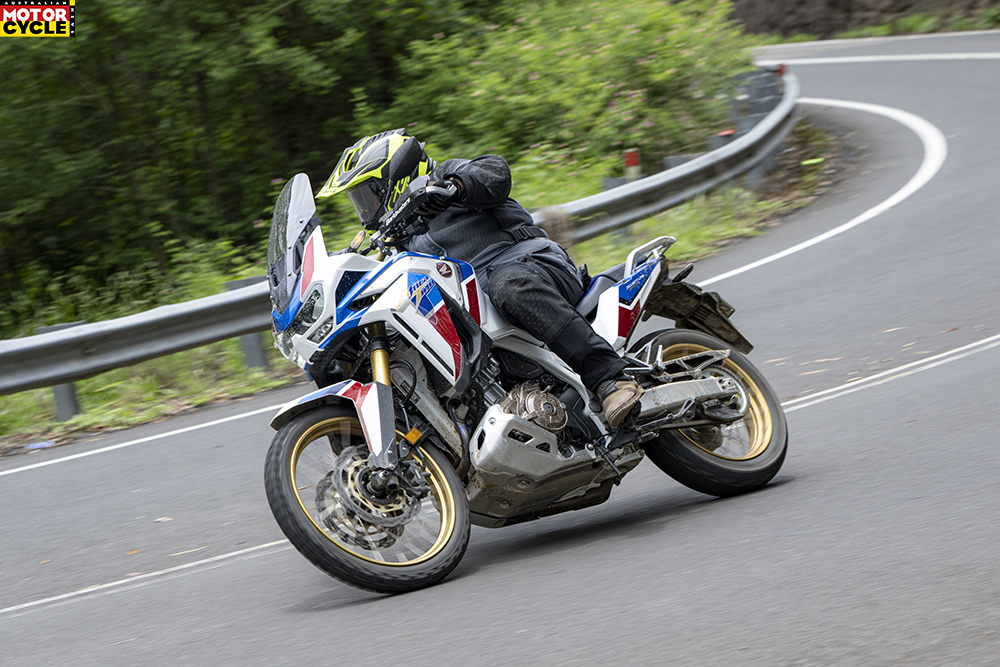 The Africa twin is an excellent all-round package for adventure touring in Australian conditions. The DCT works well in most scenarios and makes for a relaxing ride on the road between the dirt sections. It is a bit of a game changer in traffic, never lose a race across a set of lights again, just point and shoot. 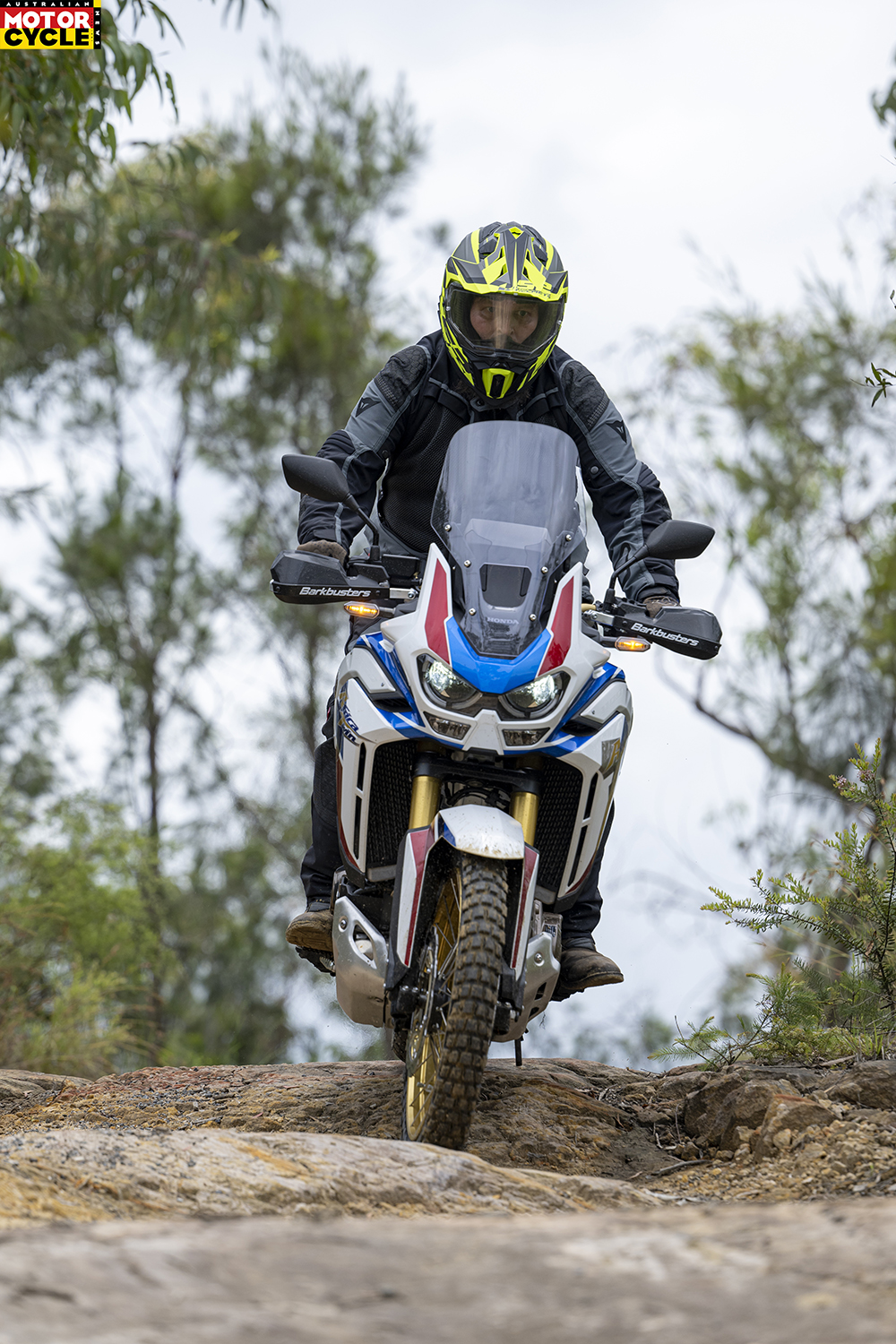 There are only a few small niggles for me with this bike; the tall screen, no Android Auto and when you do a jump going downhill the transmission gets confused and kind of pulls the clutch in until it works out what the hell you are doing. None of these are really deal breakers. 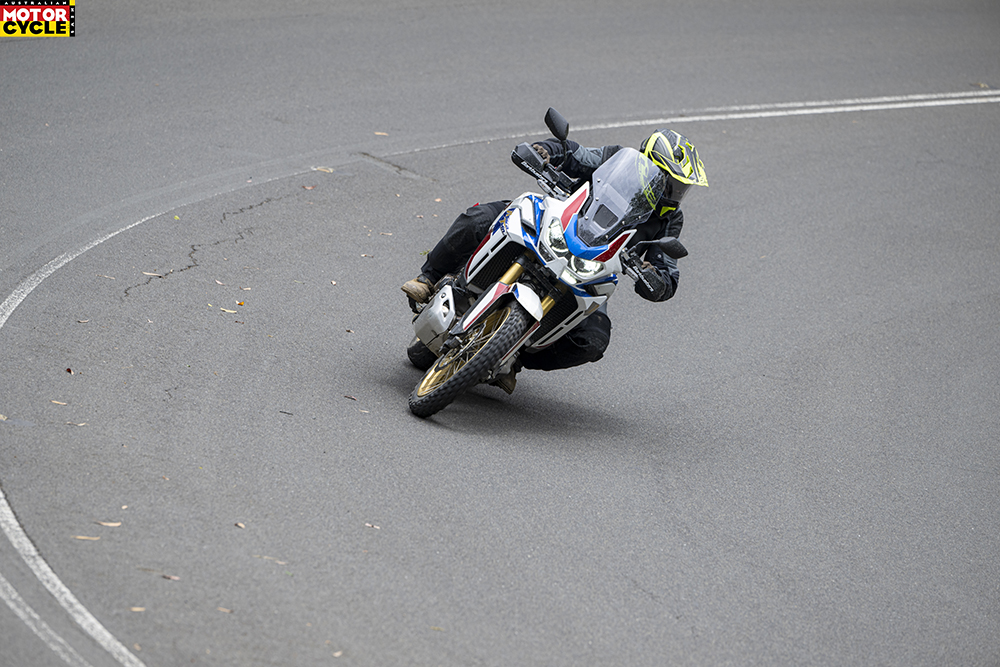 But if you take a gander at the 2022 model that’s hitting dealer showrooms now, you will find they have a smaller windscreen, Apple Carplay and Android Auto  standard, and the DCT has been given a few tweaks in the lower gears. Sounds good to me. 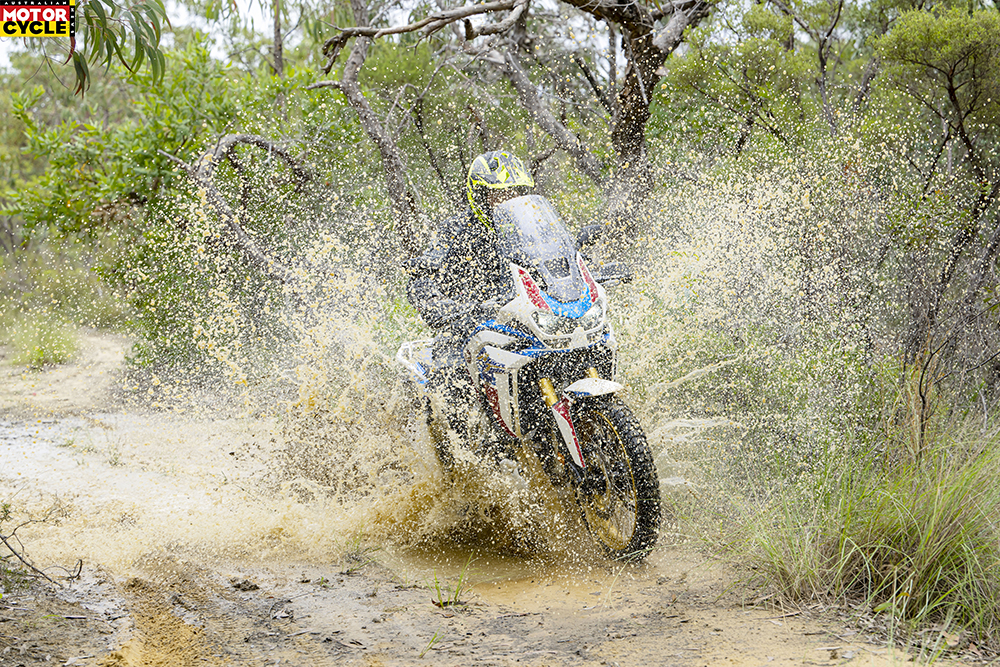