I’ve spent a bit of time on the Harley-Davidson range over the past few years, and looking at what the American brand has planned for the next few, I’ll be spending a lot more time on the big V-twin (and electric) bikes.

All that riding and testing got me wondering about what a Harley-Davidson really is and what the brand is becoming. Sure, it makes touring bikes, baggers and conventional cruisers, but I reckon if you took the number of people who actually bought a Harley for the purpose outlined on the tin, they would be far outnumbered by the rest of the H-D riding population who buy a Harley purely to ride around with their mates, or head out for a day’s blast when the sun is shining.

Being a member of the second group, I wanted to put a stripped-back cruiser up against a model from the Touring range and see which I enjoyed riding most on the freeway, through suburbia and up into the twists and turns of the local hills. A 2018 Road Glide Special and Fat Boy duly arrived. My riding partner is Steve Hewitt, who  was drafted in to provide a yardstick on just how far the American marque has come over the past two decades – because until now, he hadn’t ridden a Harley since the 1990s. On the wall in his garage is a brilliant 20-year-old photograph of him standing next to a shiny new Harley-Davidson Fat Boy. There are words I would have once used to describe his appearance – gelled-back hair, Rick Astley sunglasses and Harry high-pants – but these days we need to be a more politically correct, so I’m just going to use   effeminate. “Buggered if I can remember why I bought a Fat Boy,” Steve offered as we stood grinning at the photo. “I did some work for a guy who had a Harley touring business taking pillions for a ride around the area. He said everyone he had employed just wanted to ratbag around and be dickheads, so he gave me a start. I think I did it twice and decided I just wanted to ratbag around and be a dickhead also. 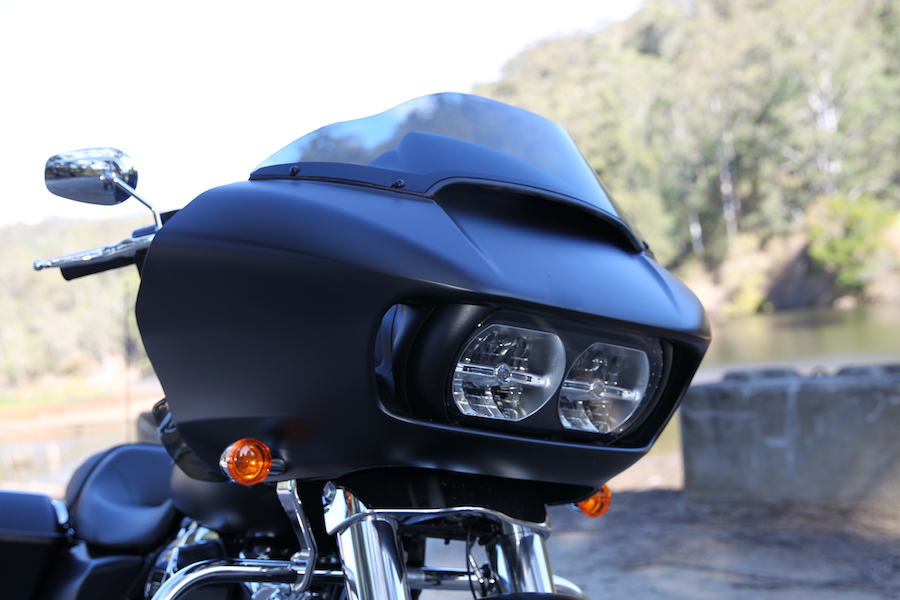 “The main problem was you would get someone on the back with no idea about being a pillion, and they would spend the whole ride trying to kill us both.”

Steve’s introduction to the 2018 model consisted of me explaining to him that it now used a keyless ignition and I tossed him the fob. Almost instantly the Fat Boy’s advantages in a built-up urban area became obvious. While Steve manoeuvred the Fatty out of its parking space and roared off, I was struggling to un-wedge the Road Glide from between two parked cars, and because the Batwing fairing blocks the view of the front wheel, I could not work out how much room I had to move forward. The Glide also weighs 70kg more than the Fat Boy (317kg v 388kg), so it’s tricky to move around, especially on a slope, and its large panniers aren’t conducive to efficient lane filtering. 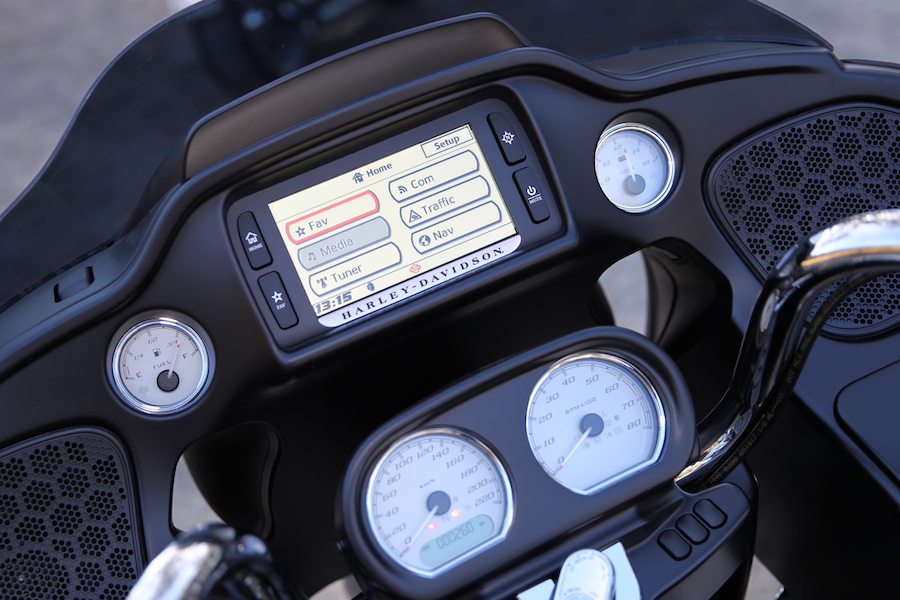 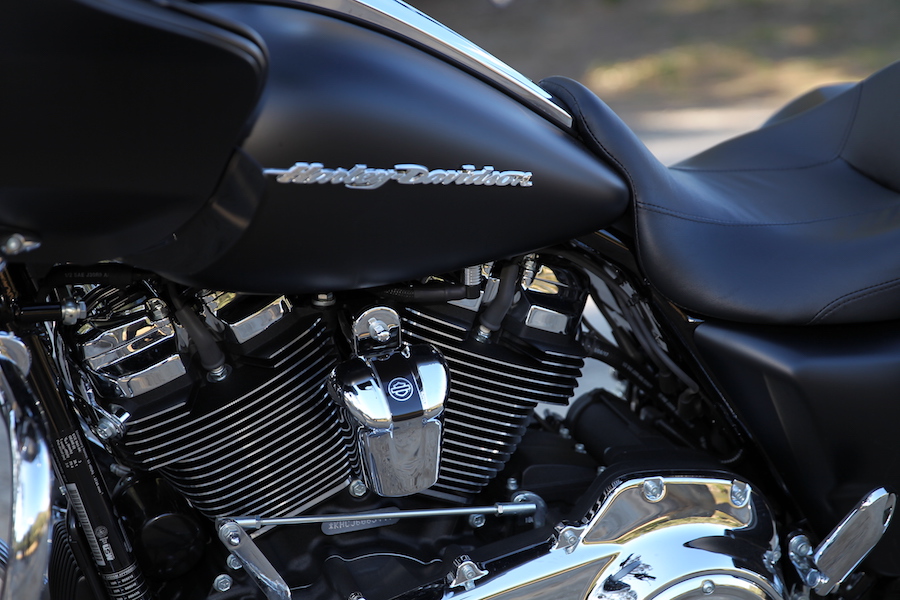 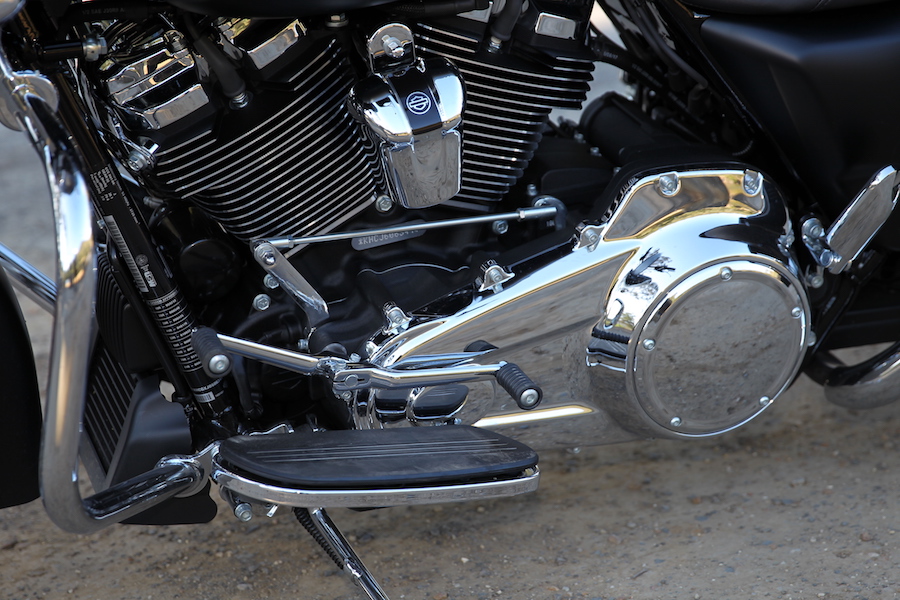 Though I did have the advantage of being able to store a couple of packets of Allen’s Snakes, a jumper and a spare pair of gloves in the hard panniers. And I had my phone charging via a USB port in a little cubbyhole in the protective fairing. I also had my favourite tunes blasting out of the stereo.

I knew where we were going so I didn’t require the satnav system which displays on the LCD touchscreen dash. Steve had none of these things on the Fat Boy – part of the reason the Fat Boy is $6500 less expensive. Interestingly, the Fat Boy  received a lot more attention from passersby than the Road Glide Special. Anyone with little interest in motorcycles would know what a Fat Boy is, and most would make the connection between that name and the rumbling, chrome-plated beast Steve was straddling with its solid aluminium wheels and impossibly fat 240 rear tyre.

But it was the run to the top of the notoriously fun Macquarie Pass that provided the biggest surprise. The Fat Boy’s wide tyres may look good, but to get the bike to corner quickly requires a heap of heavy manhandling, and a fast-in-slow-out approach. Meanwhile, the Road Glide called on its 150Nm to blast from corner to corner and, compared to the Fat Boy, it’s direction changes were more intuitive and required way less effort. 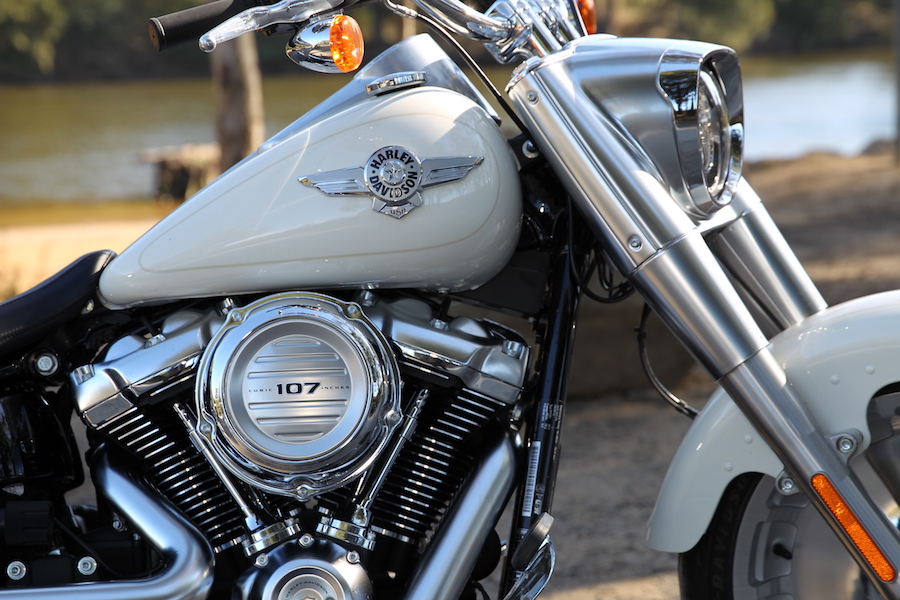 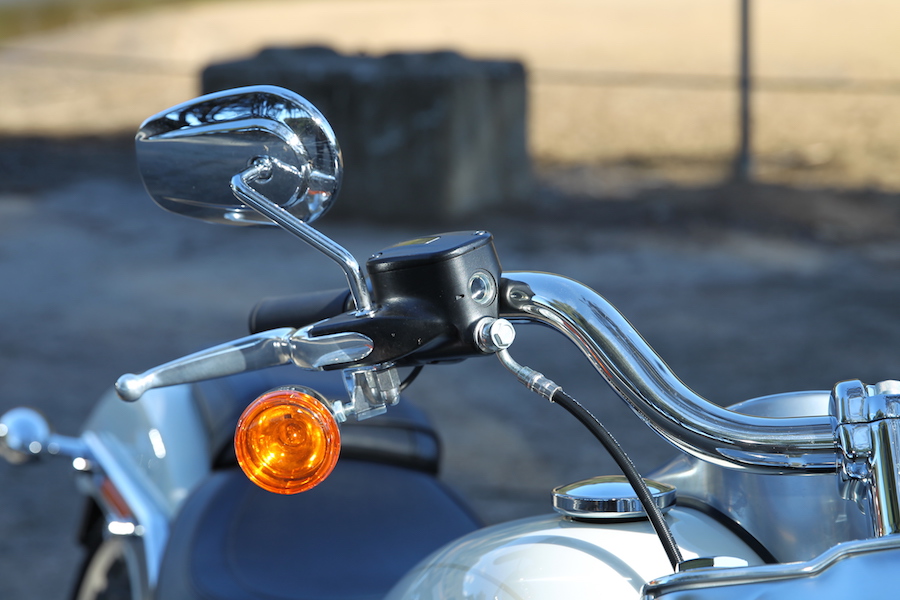 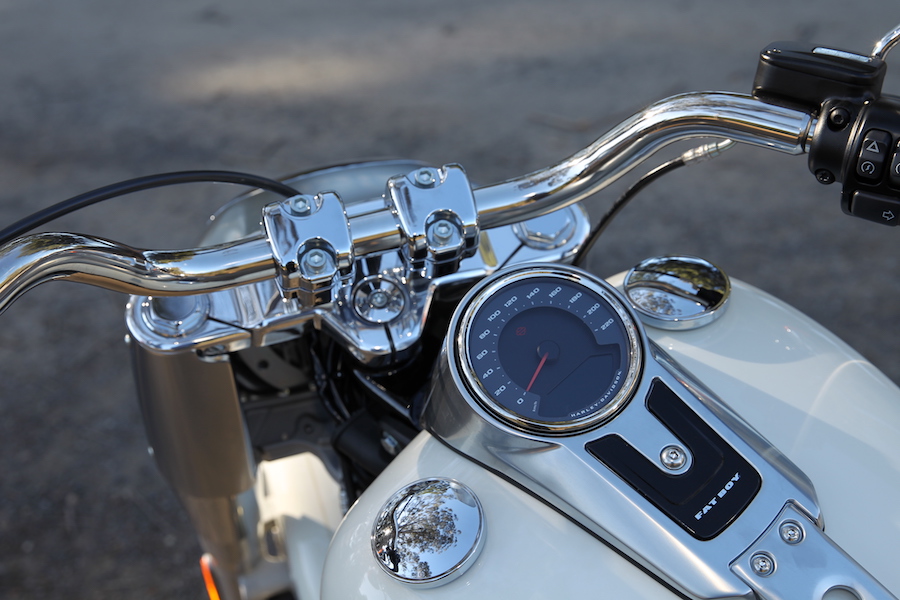 Despite both bikes using the same 107 Milwaukee-Eight engine, the Fat Boy produces 5Nm less than the Road Glide, and its 145Nm peaks 250rpm earlier than the Glide’s 150Nm.

Both bikes enjoyed a fair bit of footboard grinding, though a little less for the Fat Boy due to its wider rubber.

Up the top at the Robertson Pie Shop, we compared notes and agreed that the brakes on both bikes were impressive, given the weight each is having to pull up, but a quick run up and down the road on each revealed the brake lever on the Fat Boy, with its single-disc front end, was rock hard compared to the Road Glide’s twin-disc setup. “I’m struggling to get my short fingers around the levers on the Fat Boy,” Steve offered. “And if I’m paying $30K plus for these, I’d expect span-adjustable levers.”

Swapping bikes for the run to Kangaroo Valley showed just how large the Road Glide is. While I giggled at the Fat Boy suddenly feeling like a minibike, Steve was struggling with the enormity of the Glide, comparing it to a houseboat.

Soon enough, with an even amount of kilometres of each bike under our belts, we stopped for lunch. 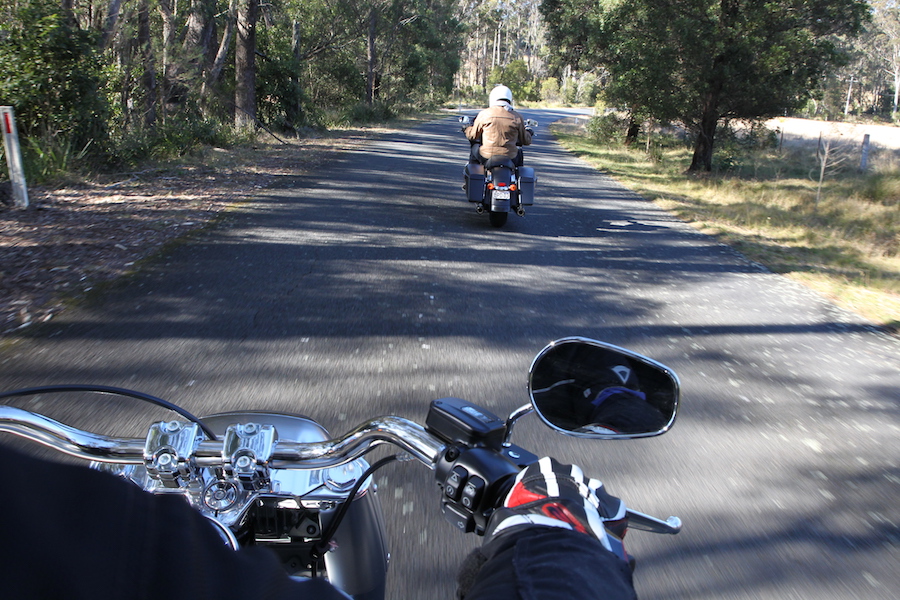 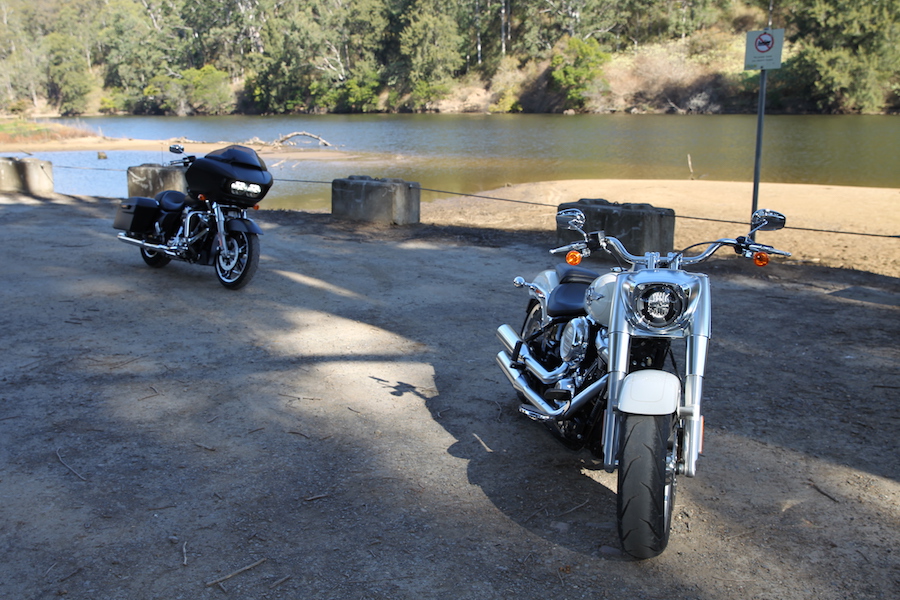 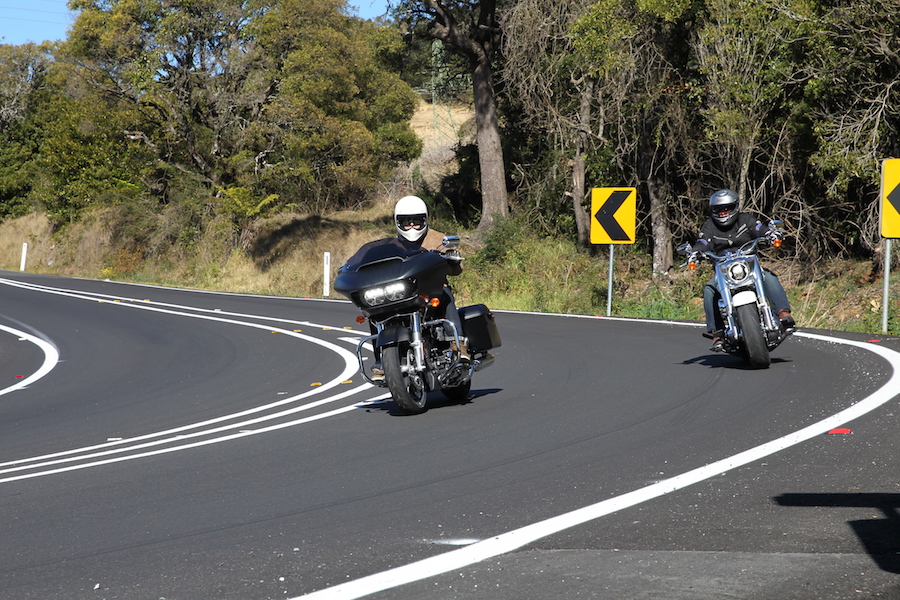 We’ll let you in on one of our favourite test routes on the New South Wales south coast. Starting from the seaside town of Thirroul, we head south down the freeway to Albion Park where a mid-week right turn usually results in a gloriously  uninterrupted run up Macquarie Pass. Here, Steve was muscling the Fat Boy, while I was Gliding it up the hill. There was plenty of scraping of  footboards as we used the torque to negotiate the 107 cubic-inch V-twins up the Pass, and we made it to Robertson Pie shop in good time. A (bloody good) pie and a yarn with the locals later, we swapped bikes and headed down Pearson’s lane, over Barrengarry Mountain and into Kangaroo Valley. Another swap and took on Cambewarra Mountain before arriving at Bomaderry where we turned left and used the new freeway to head north, arriving back spot-on beer o’clock!