As if the Ariel Ace wasn’t trick enough, the British marque goes and releases a limited-edition R version

It’s been four short years since the return of Ariel, yet another born-again historic British brand, with the 2014 unveiling of the ultra-distinctive V4 Honda-engined 1200cc Ariel Ace. Starting somewhere around the £20,000 ($35,000) mark, these are available with either a girder front end in GT guise, or a more conventional Öhlins upside-down fork for the Sport model. Since then more than 100 examples of the Ace – nicknamed the ‘Angry Ant’ thanks to its unique styling – have each been hand-built by one of a team of three technicians in Ariel Motor Co.’s rural HQ in Somerset, UK, complete with a signed plaque accompanying each bike denoting the person who assembled it. The vast choice of upgrades and accessories available make it unlikely that any two Ariels are built to the same exact spec, although according to Ariel director and Ace project leader, 38-year old Tom Siebert, there’s been a huge bias on the part of customers for the girder-forked GT model. “Ninety five percent of the bikes we’ve built have been with the girder front end,” he says.

But irrespective of the front suspension chosen by customers, these modern Ariels all feature the same unique six-part exoskeletal aluminium chassis, which takes 70 man hours to create. This clearly follows the inside-out aesthetic appearance and design traditions established by Ariel with its Atom sports-car, resulting in a chassis format not previously seen on a production motorcycle, which allows its detailed engineering and functional format to be readily apparent. The frame components are CNC machined from solid billet, then welded-up to wrap around the 76º V4 engine with chain-driven SOHC sourced from the Honda VFR1200F. This is supplied directly to the small British company by the Japanese giant, in a move that runs counter to its normal policy not to furnish engines to third parties. It indicates the respect Honda holds for Ariel thanks to the two companies’ successful collaboration since 1999 in manufacturing the Ariel Atom, a road-legal two-seater racing car using Honda’s Civic Type R engine, and the same trademark chassis design concept that’s been cleverly spun off onto the Ace. The Atom has achieved iconic status as the world’s fastest accelerating, best handling vehicle on four wheels, with almost 1900 passionately satisfied customers so far for a car unlike anything else on the highways – or race tracks – on earth.

Last year Ariel begin manufacturing the series of just 10 examples of its limited-edition Ace R model, which it had launched at the November 2016 Birmingham NEC Show complete with a fully adjustable 43mm Öhlins upside-down fork replacing the girder front end, via considerably more radical steering geometry. But it’s not the chassis that’s the main focus here, the R-model represents a considerably more powerful version costing £49,995 ($90,000) + tax of Ariel’s current V4 motorcycle, delivering extra performance and an even higher spec than the already exotic base model. Just 10 examples of the Ace R will be built in total, making it both hyper-exclusive and rare, and if you wanted one, you’re too late – they’re all sold.

“We wanted to make a truly special bike building on knowledge gained from other [four-wheeled] Ariel Limited Editions, like the Atom V8 and Mugen,” explains Siebert. “After 20 years slowly building Ariel to where it is today, we understand low volume vehicles, as well as the customers that buy them, and we knew that the extra performance, plus our usual scrupulous attention to detail on this special motorcycle, would be appealing.” 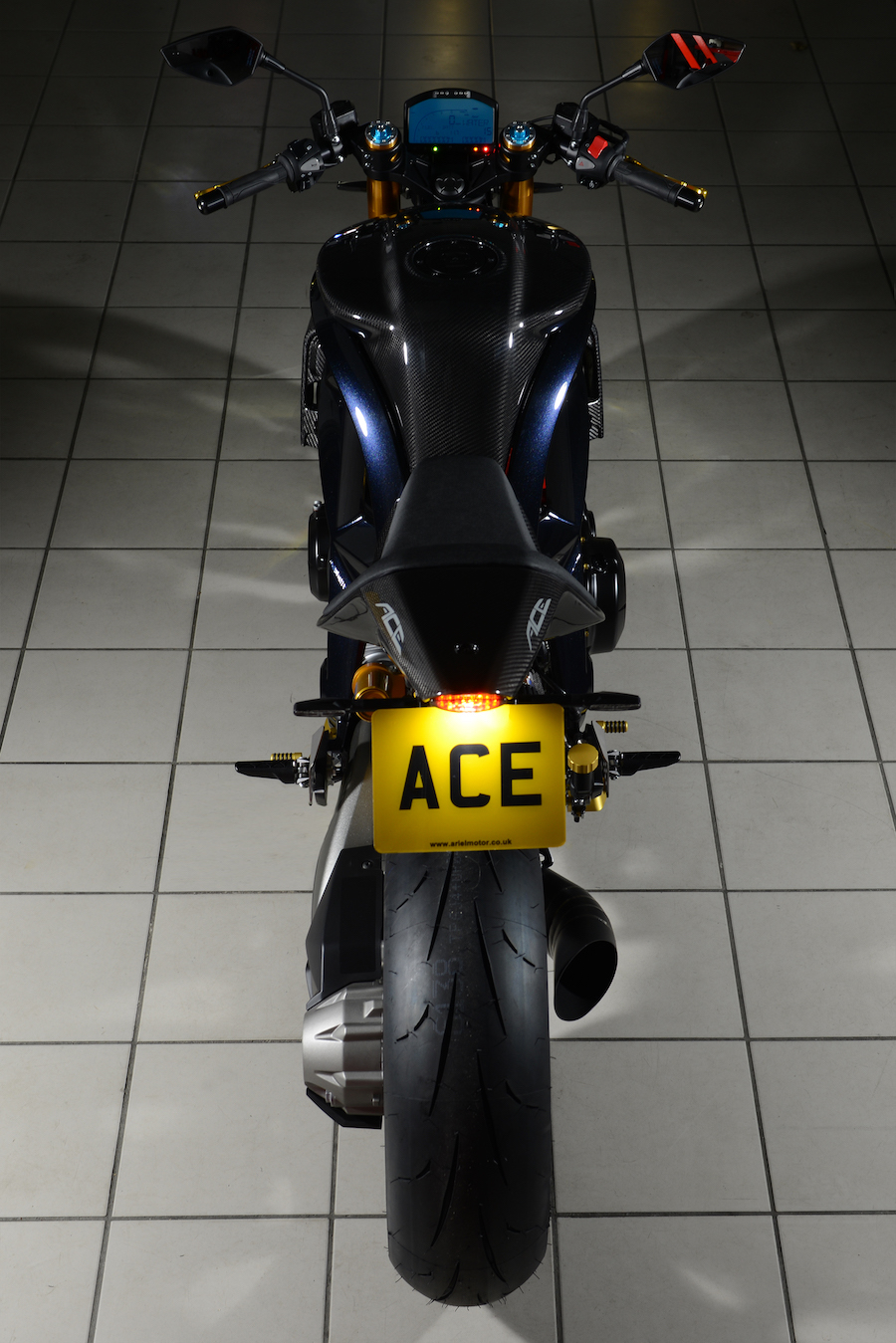 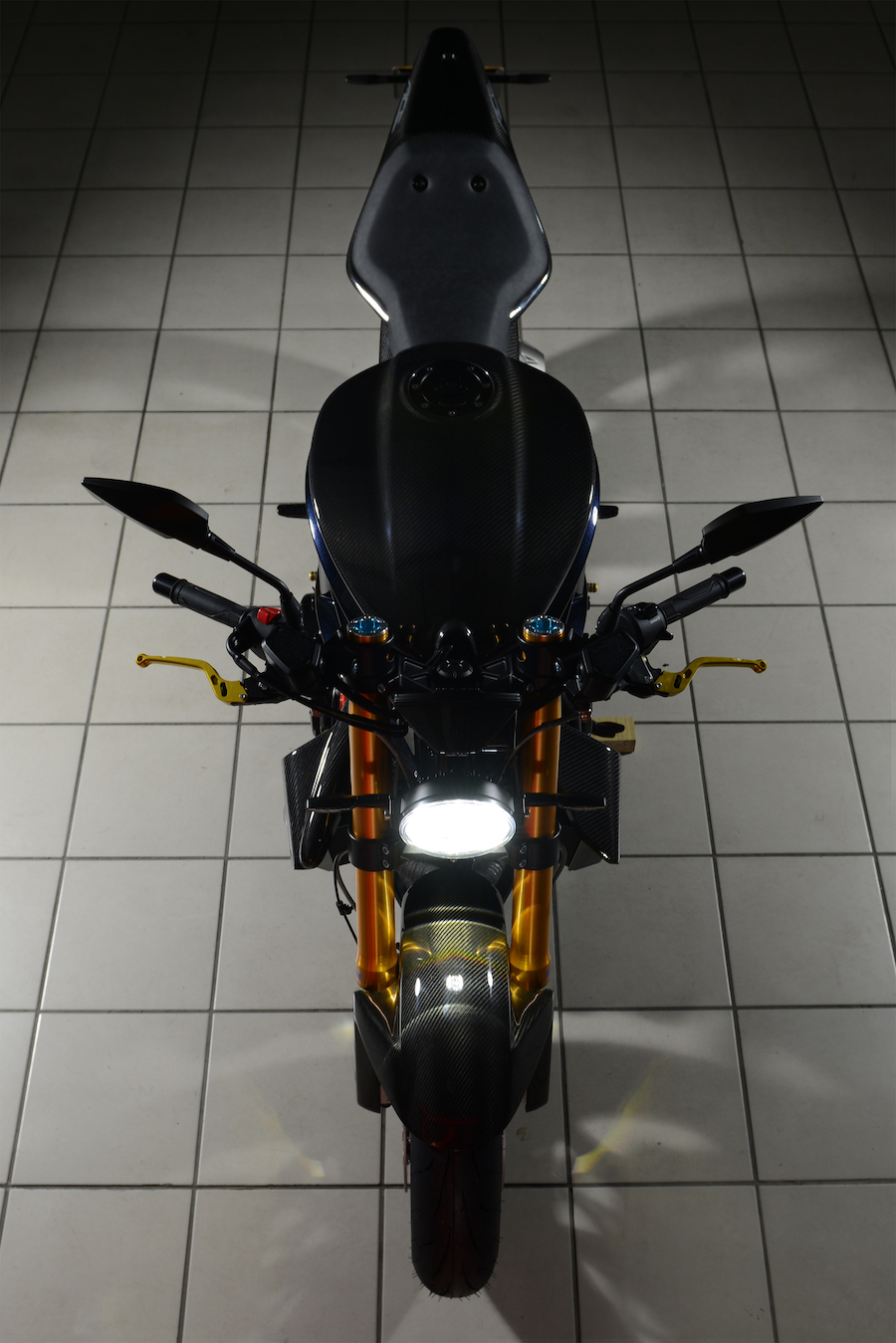 Production of the Ace R began in March last year and half have been built so far, with the majority sold to customers in Britain, plus others further afield in Australia, Vietnam and Singapore. Having ridden the prototype Ace before it was launched, as well as other production ones since, the chance to spend a day riding the sixth Ace R to be built before it headed off to its overseas owner was a prized hands-on look at what Ariel’s really capable of today, performance-wise.

The Ace R features a revamped lightweight evolution of Ariel’s distinctive aluminium chassis, with adjustable eccentric head bearings delivering a more radical default steering head angle of 21.4 degrees for sharper, quicker steering via the fully adjustable Öhlins fork embracing uprated springs and unique valving. There’s a single-sided cast aluminium swingarm housing the shaft final drive, again with a fully adjustable Öhlins shock and a Pro-Link progressive-rate link. Five-spoke BST carbon-fibre wheels are fitted, giving a claimed 50 percent weight saving over the standard Ace’s aluminium wheels resulting in improved acceleration via reduced rotational inertia, better suspension compliance due to the reduction in unsprung weight, and quicker steering thanks to the front wheel’s reduced gyroscopic effect. The Nissin brake package features twin floating 320mm front discs with six-piston radial calipers, plus a rear 276mm disc with twin-piston caliper, while Goodridge braided steel hoses and fittings are used throughout the bike for all brake and clutch lines. ABS is naturally fitted as stock, together with switchable traction control which can be turned off via the red button in the array of five mounted on the left of the fuel tank, just behind the steering head. Besides the wheels, the bodywork is made entirely from carbon fibre, saving a claimed 65 percent in weight for each component over the standard Ace, thus delivering a 10kg weight saving over the stock model, with the Ace R scaling in at 219kg dry, with a 52/48% frontal bias. For what’s claimed to be the first time on a production streetbike, the fuel tank is also made of carbon fibre, Kevlar-reinforced and coated internally with a special acrylic lining that even guards against ethanol penetration, a big concern with fuel nowadays. The lower 745mm-high seat on the Ace R is also an updated version of the Ace’s throne, developed by the Ariel team following extensive testing and customer feedback on ergonomics. Three levels of footrests are also available for customers to choose from, also featuring fore and aft adjustment.

“We’ve done a fair bit of work with car engines,” says Siebert. “Including developing the Atom V8 motor we build ourselves with Hayabusa heads and cylinder blocks.” 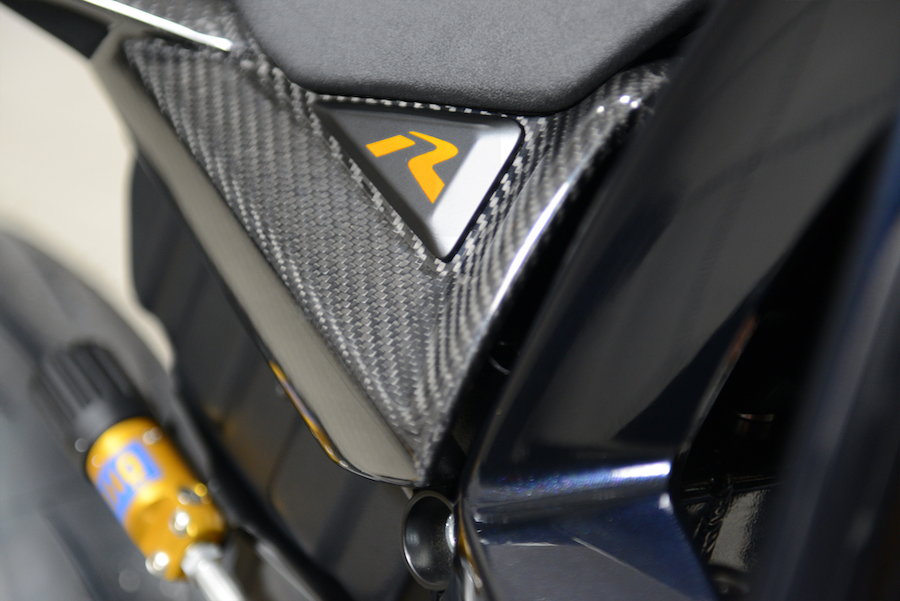 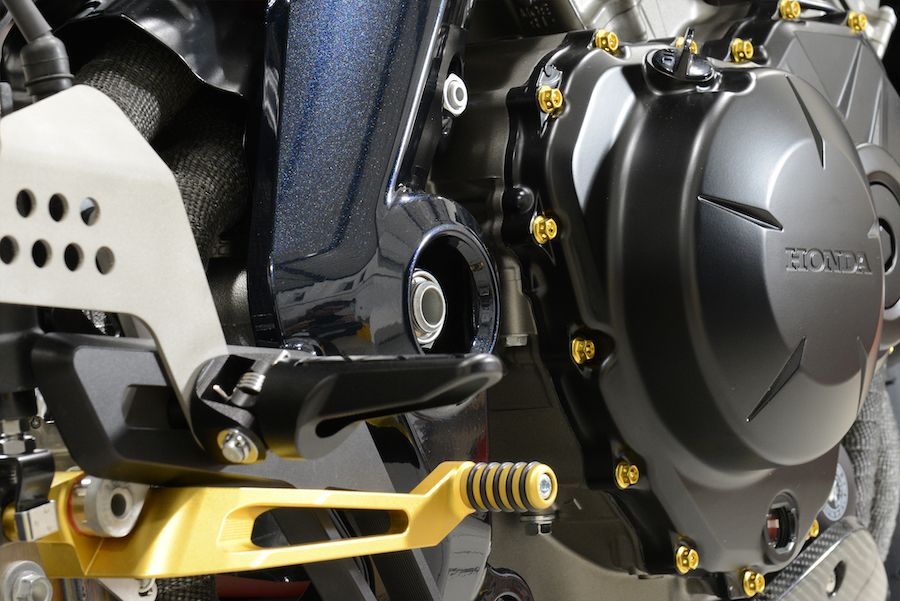 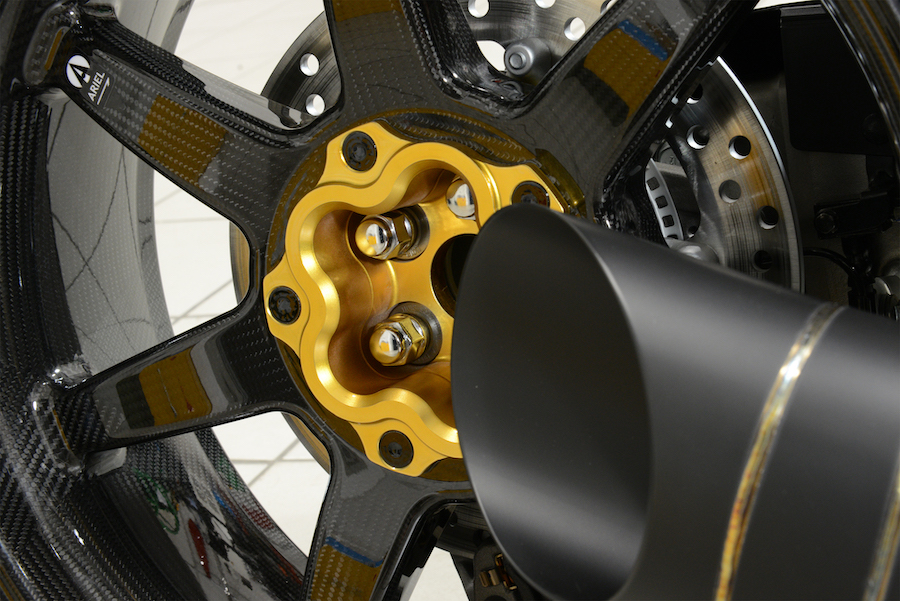 Delivering what Ariel claims is ‘an outstanding level of performance throughout the rev range’, the Ace R’s tuned V4 Honda engine recalls the Japanese company’s legendary – but less powerful! – World title-winning RC30 and RC45 V4 Superbikes. The stock plain-bearing crankshaft has been lightened by almost half a kilo, then rebalanced for a quicker response as well as smoother running, according to Siebert.

Lighter but stronger steel conrods are fitted, carrying new 1mm-over forged pistons delivering a capacity increase from 1237cc to 1267cc via 82 x 60mm dimensions. These pistons run in honed-out stock Honda cylinder blocks now coated with Nikasil, and have a quite different shape to stock, with a pronounced crown which helps lift the compression ratio to 12.8:1 (up from 12:1) thanks also to completely reshaped combustion chambers – all part of some serious work on the top end. The stock electronic fuel injection and quartet of 44mm Keihin throttle bodies are retained, but a Power Commander is fitted, and there’s an all-new Ariel stainless steel exhaust with the catalyst removed, as well as most of the silencing. This is not a politically correct motorcycle, and hearing it run leaves you in no doubt that the Ant has got a whole lot angrier! 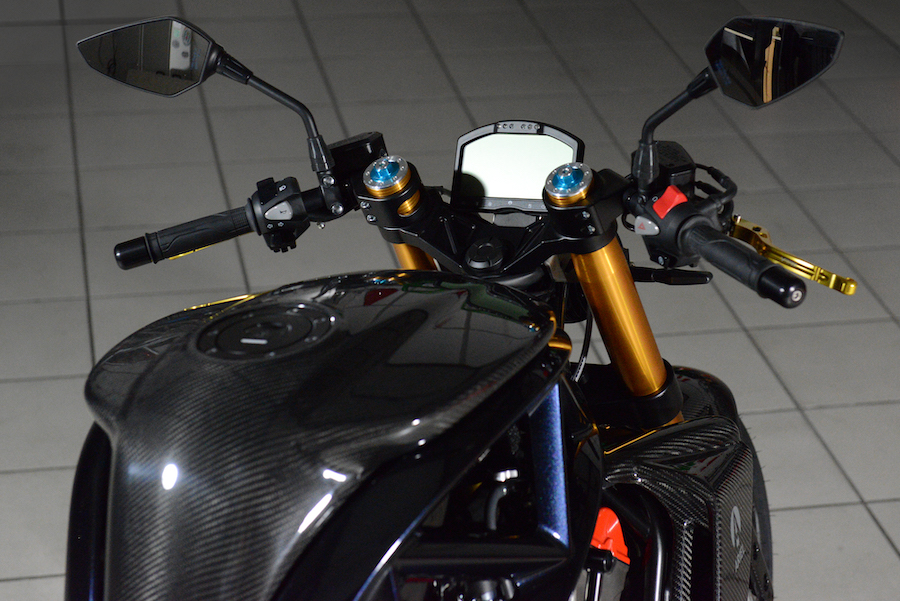 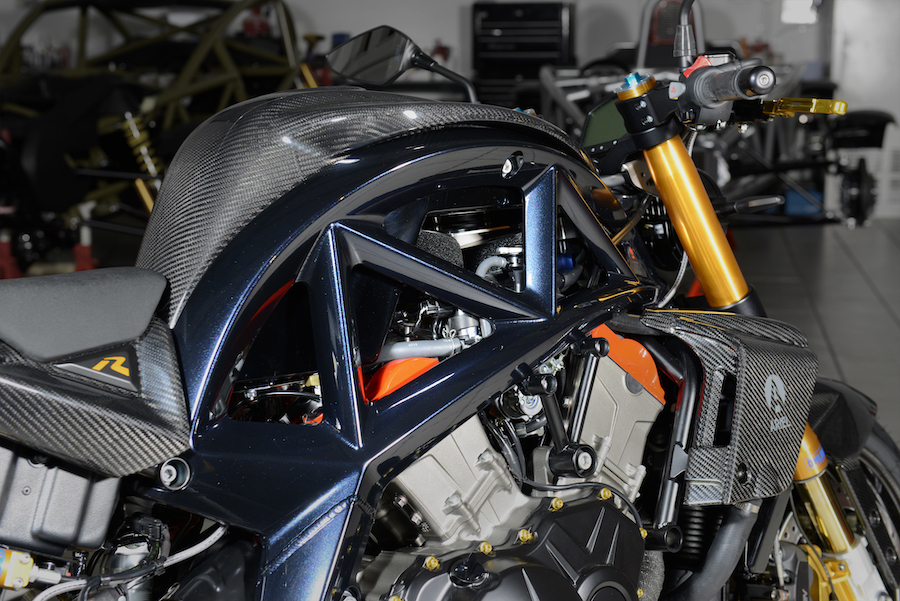 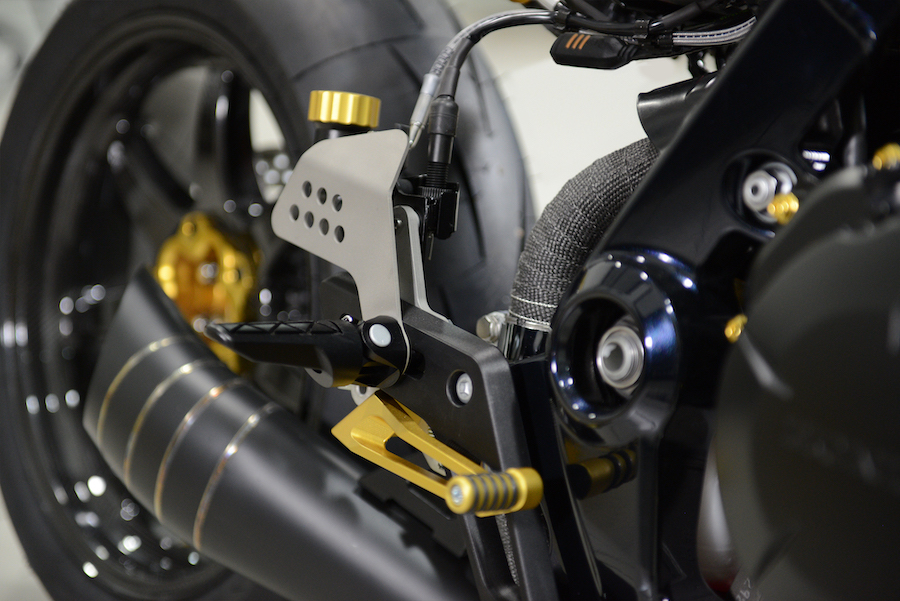 Ariel has extensively ported and gas-flowed the SOHC cylinder heads, according to Siebert, and fitted 1mm oversize valves on both inlet and exhaust, operated by special high-lift camshafts machined from solid stainless steel billets. These were especially developed by Ariel to suit the Honda Unicam engine configuration, with revised valve timing and extra duration. Together with the extensive cylinder head work and lightened internals plus the small extra lift in capacity, all this permits the Ace R motor to deliver that 22kW power increase and significant extra torque, still with a strong, smooth, step-less power curve. This allows the Ace R to take the stock Ace’s already impressive performance one stage further with a claimed 0-100km/h time of just 2.7 seconds, and a claimed top speed of 300km/h. And while the stock Honda six-speed transmission with shaft final drive is retained, the Ace R is fitted with an HM quickshifter system, as used by several World Superbike and MotoGP teams.

Slinging a leg over the Ace R revealed a quite different riding position than the likewise tele-forked Ace Sport I’d previously ridden, which had a more inclined riding position thanks to its taller seat and more steeply angled clip-ons. Those on the Ace R are flatter, and are mounted to the fork legs above the triple-clamps, so it’s not too extreme a sporty stance and definitely not tiring, since it has you sitting within the bike, ensconced in the relatively plushly upholstered but reshaped seat, rather than perched on top of it. The fact the Honda engine’s two rear cylinders sit inboard of the front two helps narrow the engine where it matters, reducing the width between your knees so it’s easy to put both feet flat on the ground. Pity there were no heated grips on this bike, though, and also that the nice-looking footrests follow the old Ducati tradition of being too smooth, so your toes may slip off the ends when leaning off the bike, cornering hard. This company invented the wheel. (No, really!)

When it began production in 2014, the Ace V4 was the first new motorcycle from Ariel for over 50 years, since the Birmingham factory ceased production in 1967. It builds on a history of innovation that began in 1870 with the company making revolutionary bicycles fitted with the same size of wheel front and rear shod with pneumatic tyres, followed by a V8 Grand Prix racing car which took part in the first ever race at Brooklands on 6 July, 1907, and – yes, it’s true, Ariel invented the wheel! The founder of the company, James Starling, patented the spoked wheel in Britain and sold the first ever British vehicle fitted with a gearbox.

During the Great War, Ariel began producing its first motorcycles, and after the 1918 Armistice almost immediately stopped manufacturing cars to focus on building bikes. Ariel was acclaimed throughout the last century for creating innovative motorcycles like the four-cylinder twin-crankshaft Ariel Square-4 in 500cc, 600cc and finally 1000cc guises, the lightweight HP5 500cc four-stroke single with which maestro Sammy Miller dominated the trials world for more than a decade, and the avantgarde Arrow and full-enclosure Leader two-stroke models with pressed steel frames.

But Ariel Motorcycles ceased production in 1967, until the advent of the current Ace variants headed by the Ace R, which reinforce Ariel’s tradition of stepping outside the box in motorcycle design.