From the time I tipped the new ZX-10R into the first corner after I picked it up from Kawasaki, I immediately understood why Jonathan Rea had won six consecutive titles on a ZX-10. All those race wins, all that development has gone into each successive new model with a clear evolutionary line culminating in this new model – in fact, the new ZX-10R made me feel like Jonathan Rea!

Actually, no I didn’t. I never felt like any of those things and my first turn was a dust and diesel smeared roundabout in Rydalmere, NSW, which I teetered around like a cow on ice. The fact is you and I are probably incapable of fully comprehending what it takes for a man or machine to win six WorldSBK titles on the trot, but luckily Jono does and so does Kawasaki. And luckily Kawasaki also knows how to channel the lessons learnt into a road-going racer like the ZX-10R. 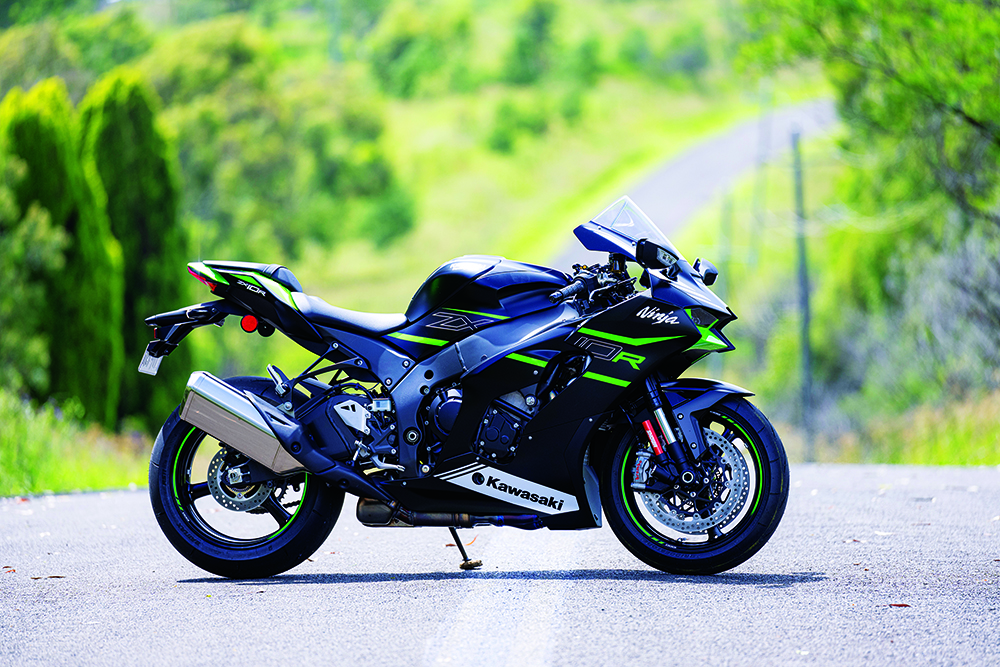 The 2021 model has received a raft of minor mechanical updates including geometry, exhaust and other changes that allow the 10 to meet Euro-5 requirements. But the most significant to you and I, and the one that’s garnered the most attention on our social media channels when we broke spy shots, is the 10’s new look and in particular, its new face.

Aerodynamics are the new black and we’ve seen all manner of wings and winglets added to the current crop of supersport machinery. Some look like they’re meant to be there, others look like an afterthought. But Kawasaki has gone a different route by integrating the wings into the front nose section in such a way that it replicates the effect achieved by external wings. 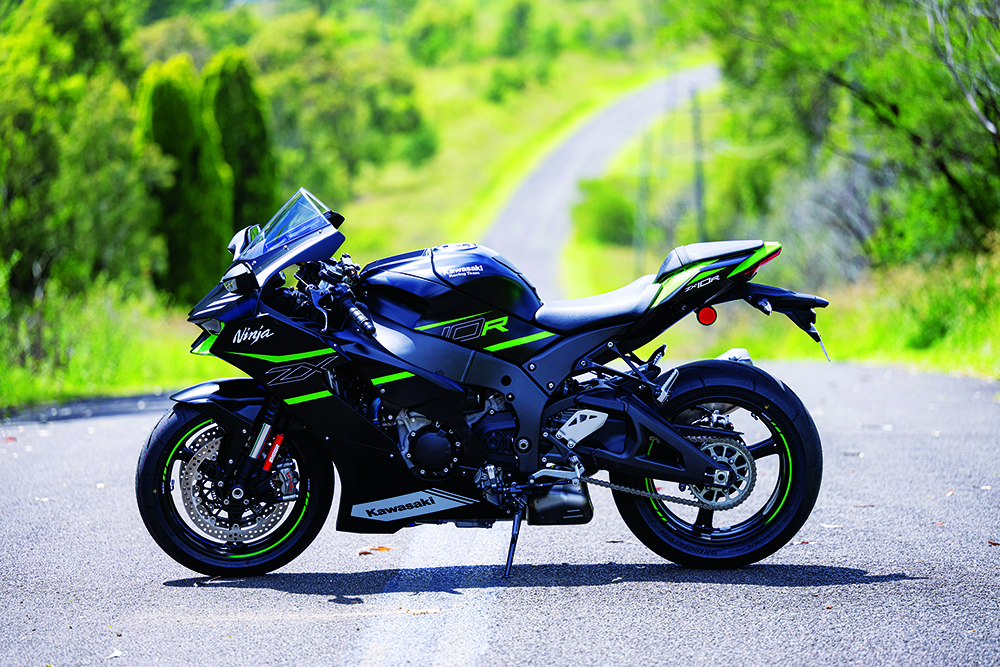 The new aerodynamics increase downforce by 17 percent over the 2020 model. You shouldn’t be too shocked by that as the previous model didn’t have any, and even with this extra front-wheel planting downforce, Kawasaki’s wind tunnel team has reduced the 10’s overall drag by seven percent.

Aerodynamics isn’t there just to look all wanky – although there’s probably an element of that in some cases. The theory is that the extra downforce provided weighs down the front wheel, providing extra grip to the front tyre and curtailing a 200-plus-horsepower motorcycle’s tendency to wheelie. 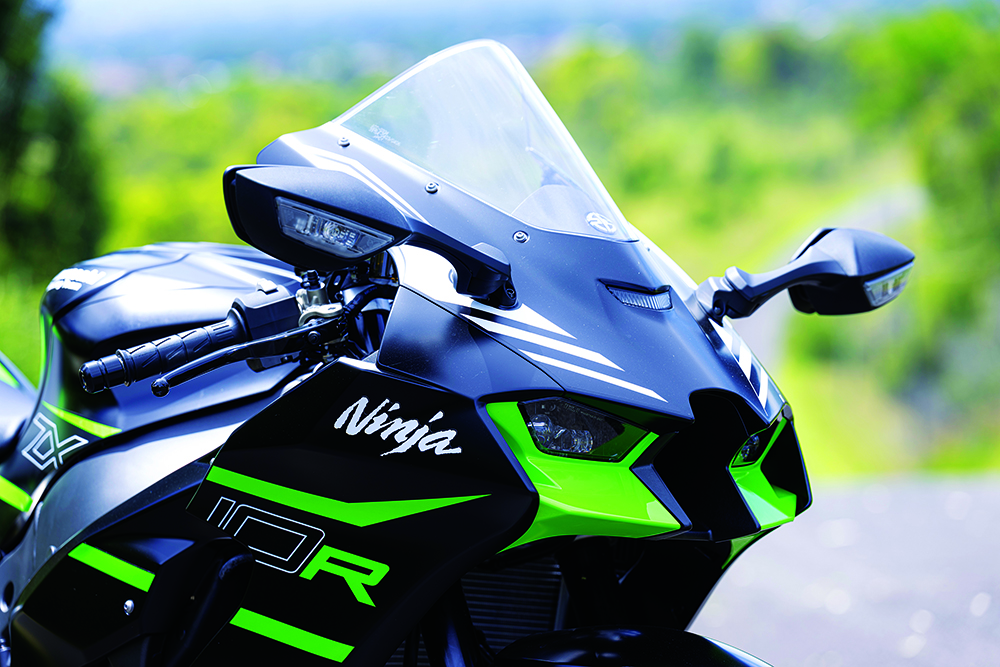 Of course, if you’re not on a mission to eke out the last few hundredths of a second from your lap time and you really must pull fat wheelies, popping the clutch once you have canned the wheelie control has the front heading skywards to hoon town.

The engine remains virtually unchanged with the most significant change being the addition of a new oil cooler, increased rev limit and more efficient Euro5-compliant exhaust. 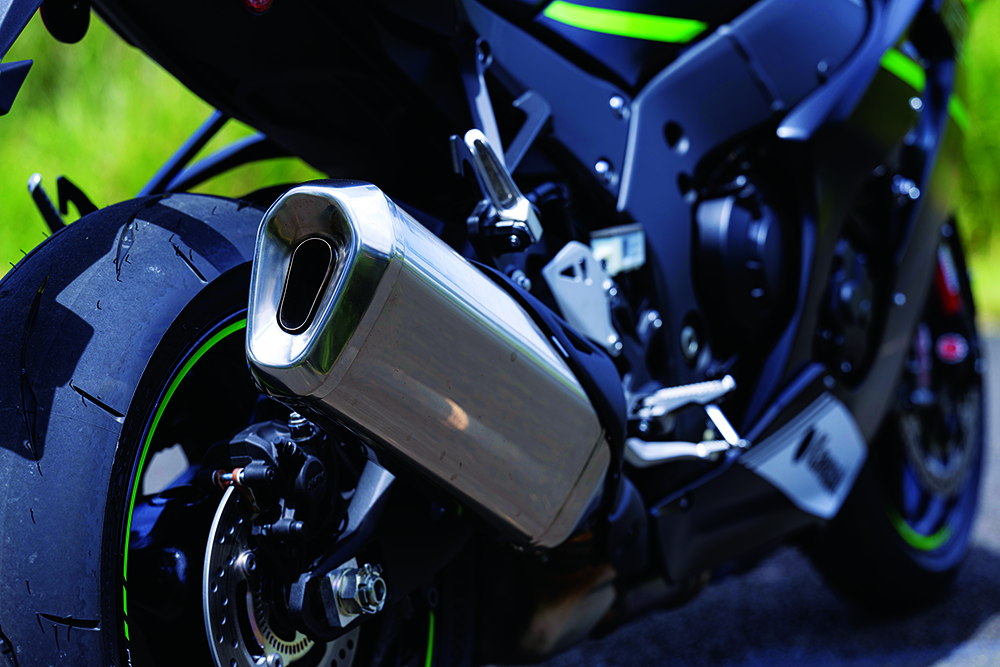 These changes netted an almost 2.5kW increase in power to 156.8kW at 13,200rpm while max torque jumps by 1.4Nm to 114.9Nm at 11,400rpm. Fairly modest gains but still a gain despite the hoop jumping required to meet Euro5 without resorting to a capacity increase.

Like many inline fours, the 10 needs to be higher in the rev range to really get its boogie on and it really doesn’t start to do anything interesting until around the eight grand mark. That might not seem too high, but on a weapon like the ZX-10R that means you’re already doing about a million kilometres an hour in first by then. Under 8000rpm the 10 is a bit of a pussycat and not intimidating at all; it’ll happily pull you around in the top cog at 60km/h. But if you wind it on at that point, you’re not going to scare yourself. 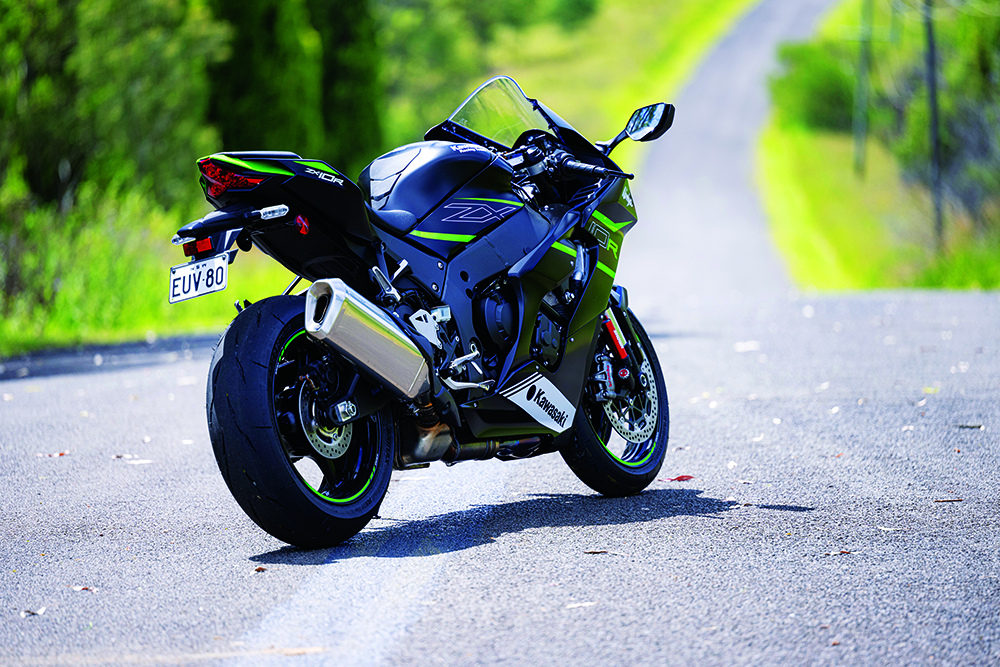 But jump on the bi-directional quickshifter and bang down through the six-speed box and once the 10’s mill is spinning up faster, the pussycat is gone and you need to get down low and hold on the best you can.

Big-bore inline four superbikes with a standard firing order are a relative rarity on the sportsbike scene these days and I’d forgotten just how much I love the sound of a four-banger on the main jet – especially with added induction roar. Any ideas of taking it easy and just going for a cruise are out the window once the 10 gets spinning up – that wail makes you feel all racer ‘n’ stuff and it’s where yours and the ZX-10’s happy places meet. 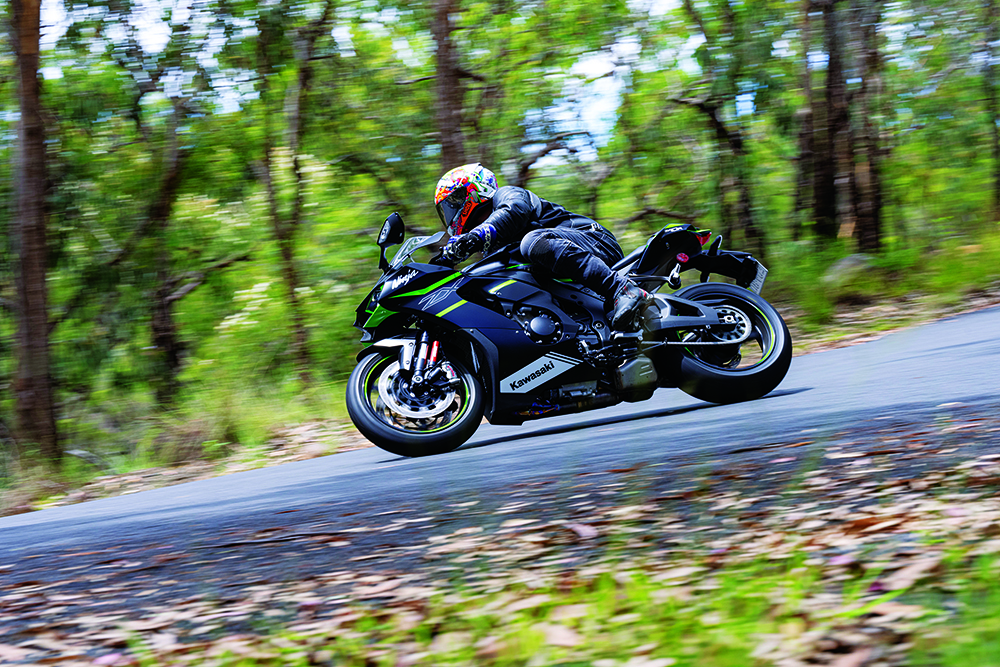 Even with its ability to lope along, let’s not pretend that the 10 is something it’s not. This is a racebike – the engine is happiest when it’s screaming, the clutch is fairly heavy when you try and negotiate heavy traffic and the new ergos are all about speed. So if you’re contemplating doing much else other than trying to scare yourself at obscene speeds on lovely corners, you shouldn’t have let the salesman talk you out of buying that Versys. 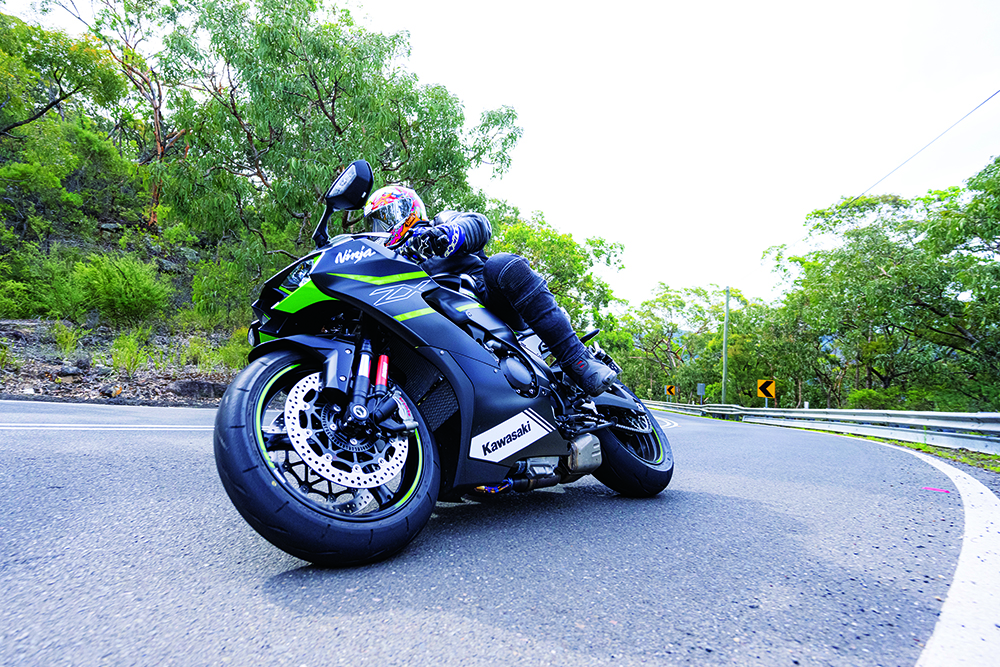 If, like me, your body resembles an over-filled beanbag more closely than the svelte figure Jonathan Rea is sporting, you’ll find the 10 a little uncomfortable. That’s not a criticism of the 10 and more a reflection of my love of donuts and bourbon (not necessarily in that order).

Kawasaki is more concerned with making a truly race-inspired, performance-focussed superbike than it is in making a compromised but comfortable roadbike and that seating position exists to get you down behind the screen. The clip-on ’bars have been moved down and forward and the rearsets now sit 5mm higher. The riding position feels aggressive and, according to Kawasaki, shifts the weight bias slightly more forward putting even more weight over the sticky front Bridgestone hoop. 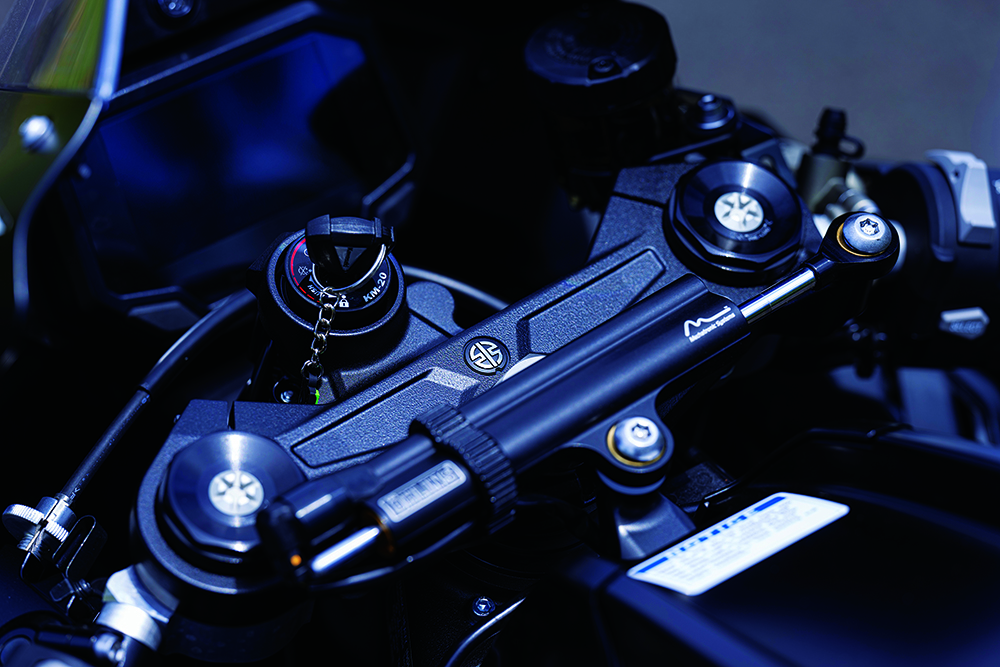 Like the race-ready engine, the aggressive seating position has you hunting for action – the combination just gets you in the mood for riding with intensity. The 10 is never going to be described as comfortable, which is fine, ’cos it’s got a job to do and does it well, but despite it’s aggressive ergos, I’ve ridden far less comfortable sportsbikes in recent history.

The 2021 model has a longer wheelbase with the use of a longer swingarm that helps it feel very planted once it’s on its side without sacrificing its flickability, and the initial tip-in requires very little effort or thought for that matter. I wouldn’t describe the 10 as initially confidence inspiring, but neither is it confidence sapping. Confidence is built when you realise you’re carrying more corner speed than you usually do on a set of corners you know well on a similar bike, which is what happened to me on the ZX-10R. 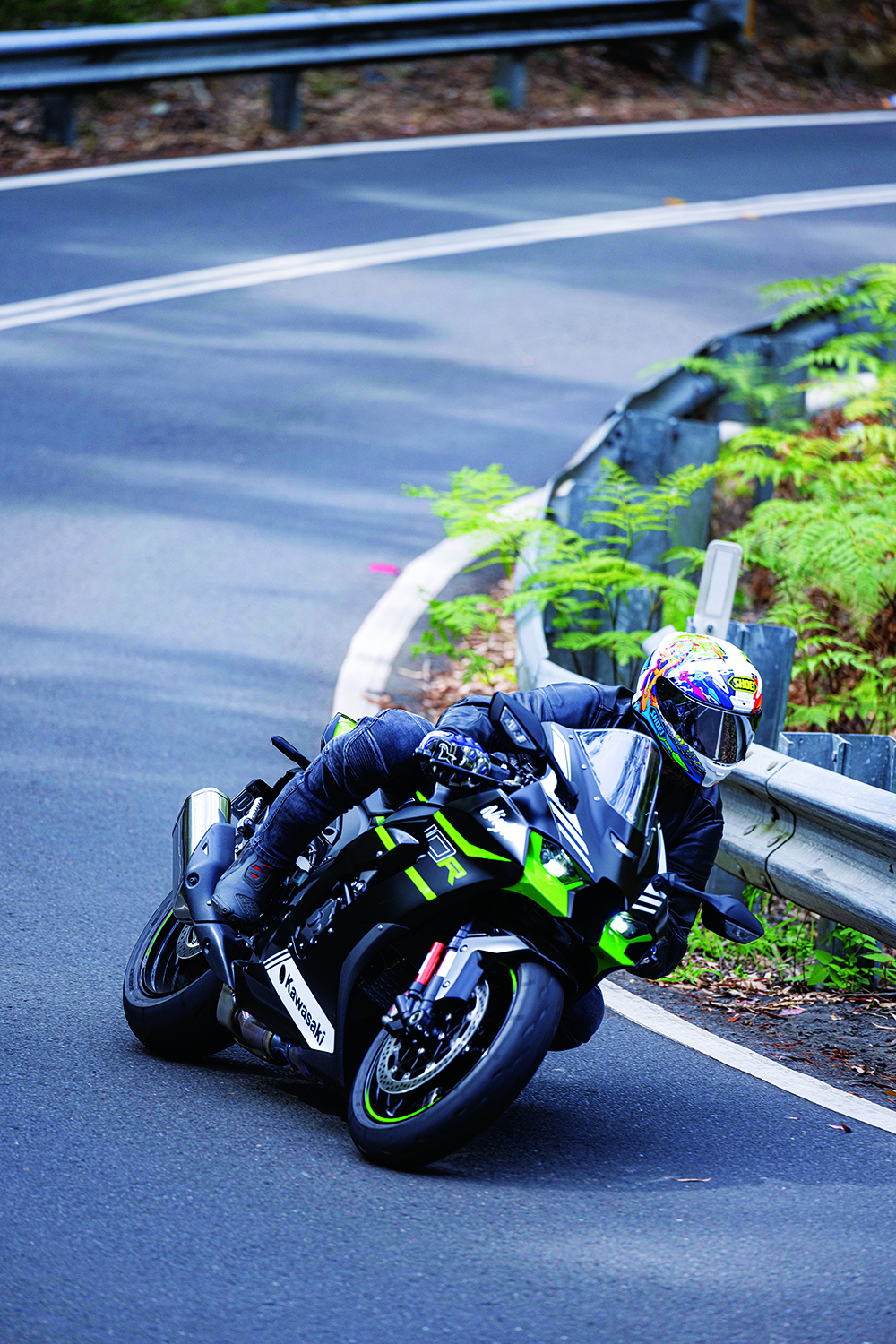 Hitting any corner feels very straightforward. There’s no quirks or special considerations to be mindful of, it feels very unremarkable until you realise the knee of your Kevlar jeans is about to tap the tarmac on what started out as a casual fang through a few corners. The only time this mere mortal felt in any way like the 10 wasn’t in complete zen-like control was when I changed line mid-corner, which made the 10 a little nervous. 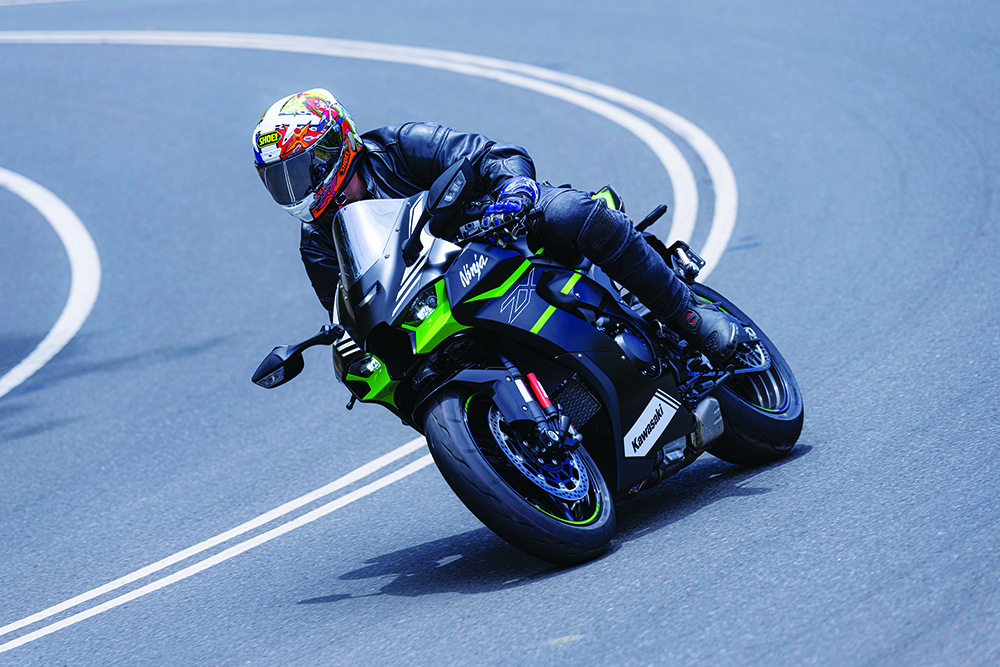 This probably isn’t an issue on track when you’re working with optimum grip with consistent lines, but when you’re on the road and you sail into corners you don’t know, sometimes you’ve got to adjust your line to suit the corner or avoid a pothole and it’s a little unnerved by those antics. Although I’m nitpicking – and ‘nervous’ is probably an exaggeration – it’s a just a sensation that the 10’s not being quite as solid as it is in every other form of high-speed cornering lunacy. 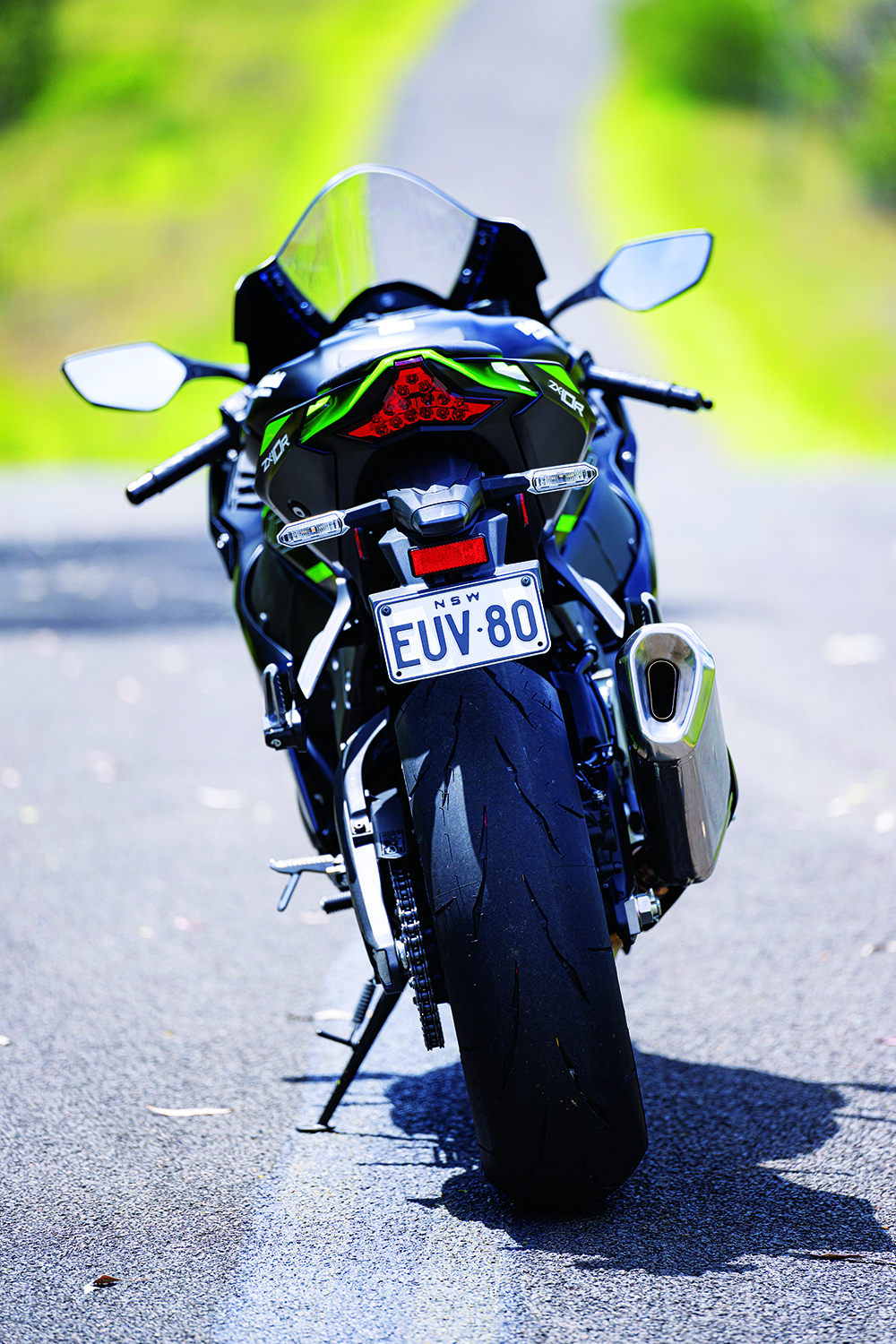 I know it’s just suspension (and maybe I’m a total wanker), but I just like looking at the 43mm Showa BFF front fork with its anodised red adornments – they’re damn sexy. And as well as looking cool, the fork and the shock work better in road conditions than on any hard-edged Supersport running analogue suspension I’ve ridden lately. With many runs up and down a savagely uncared for, but typical road northwest of Sydney, the Showa package got a thorough caning. The 10 isn’t a magic carpet ride, nor is any bike in this category with analogue suspension, but it’s damn good at soaking up bad roads especially when I think back to the Ducati Panigale V2 I ran along the same road that made me want to cry with the way it handled that nasty stretch. 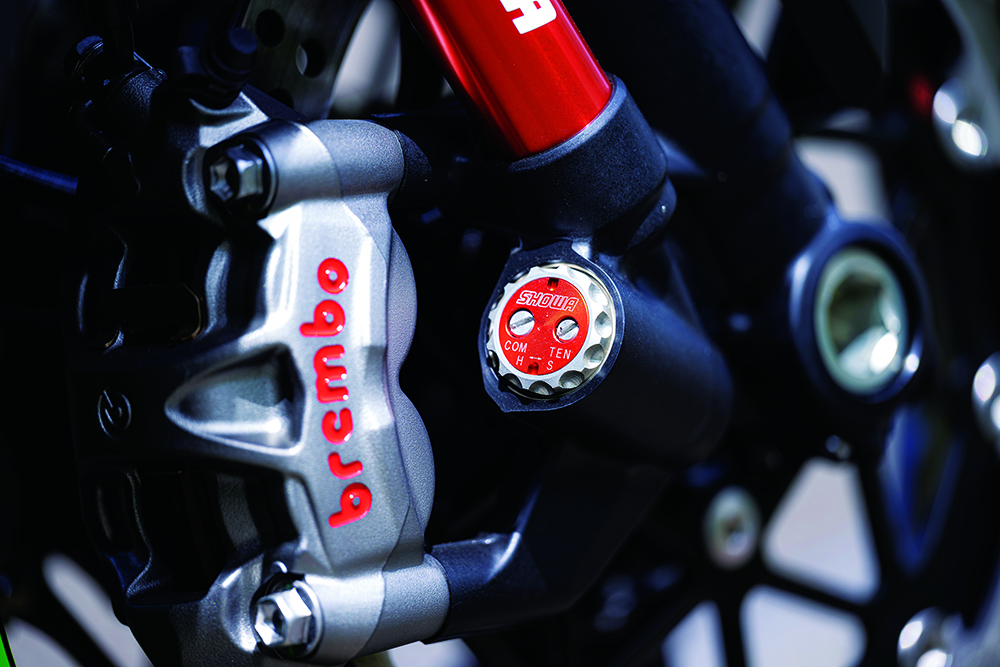 Front braking is handled by a set of Brembo M50 Monobloc calipers that keep a set of 330mm rotors in check. That’s a top-notch brake package, one seen on a bunch of well-endowed rocketships, but then Kawasaki goes and puts on a set of rubber brake lines – for the love of the sweet baby Jesus, why? It doesn’t mean the front braking capability is poor; it’s still a decent package with more than enough power, it just lacks that intricate feel, that minute sense that you’re on the edge of what the front tyre can handle.

Perhaps I’m nitpicking again, a set of braided lines and even a pad change will set you back just a few hundred bucks, but we’re talking about a motorcycle vying for a place at the pinnacle of road-going motorcycles and I reckon it deserves more. And, frankly, so does the punter who just handed over $28 grand to ride away on one. 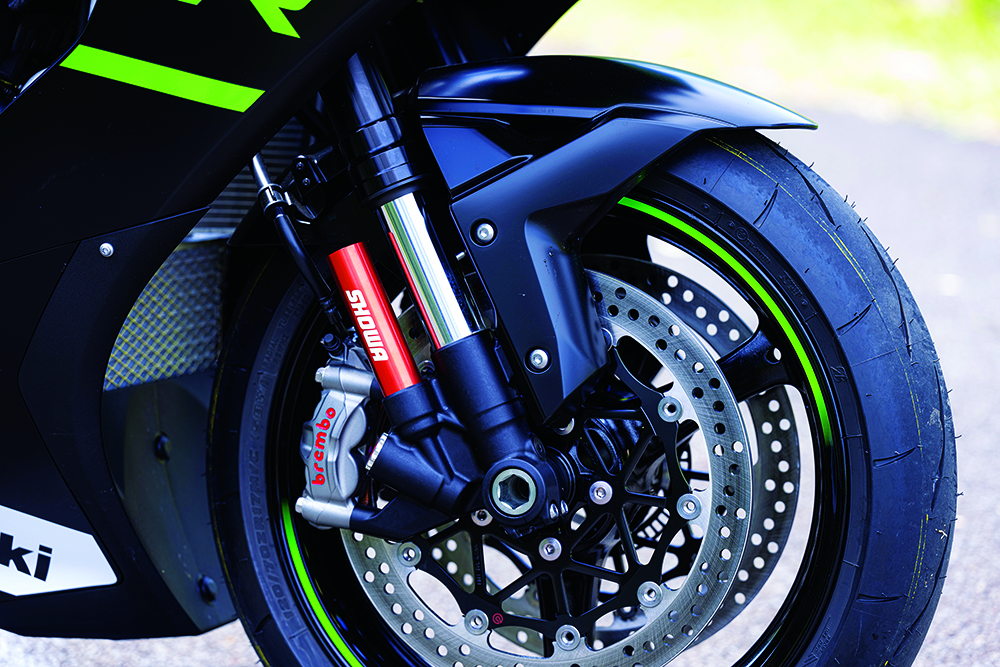 The rear brake is a single-piston Nissin affair mated to a 220mm disc, and it’s utterly underwhelming in both power and feel. Under track conditions where front brake force is such that you’re not applying huge pressure to the rear it may not be as prominent, but on the road where the rear is used a lot more it feels like a parts-bin afterthought.

For 2021 the 10 gets updated to a 4.3” TFT dash as is found across a lot of the modern Kwaka range. It is one of the best in the business for clarity and layout, but the process required to use some functions can be a bit convoluted with some functions requiring you to push and hold various buttons on various switchblocks. Like the resetting of one of the two trip metres, for example, which requires multiple stabs, holds and toggles. 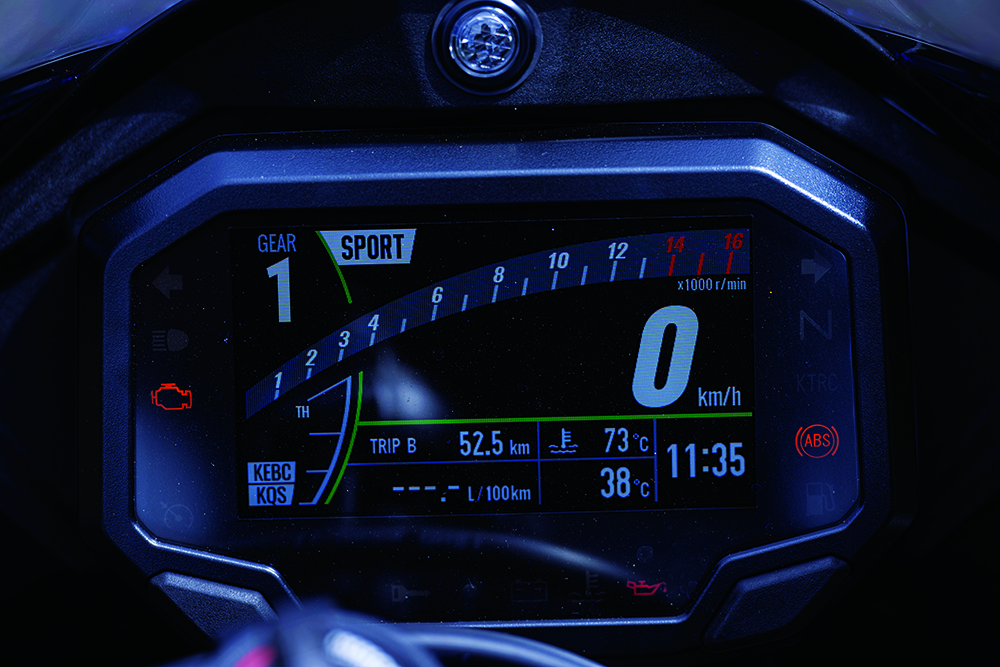 There are three pre-programmed rider modes available; Sport, Road and Rain with four customisable Rider modes also at your disposal. The fuelling in Sport mode on the 10 is so sweet I didn’t see the need to use Road mode – I could barely tell the difference, but the softer power, power delivery and ramped-up traction control of Rain mode was welcome when the heavens opened and – of course for me, they did.

Among all the whiz-bang tech is one addition that made a real-world difference to day-to-day road use and that’s cruise control. Cruise control on an out and out sportsbike might seem odd, but for old broken guys like me it’s just so good. Being able to set that sucker when you’re doing the motorway grind on your return from playtime allows you to stretch the limbs and relieve the wrists, it’s my favourite feature – oh man, I’m sounding old! 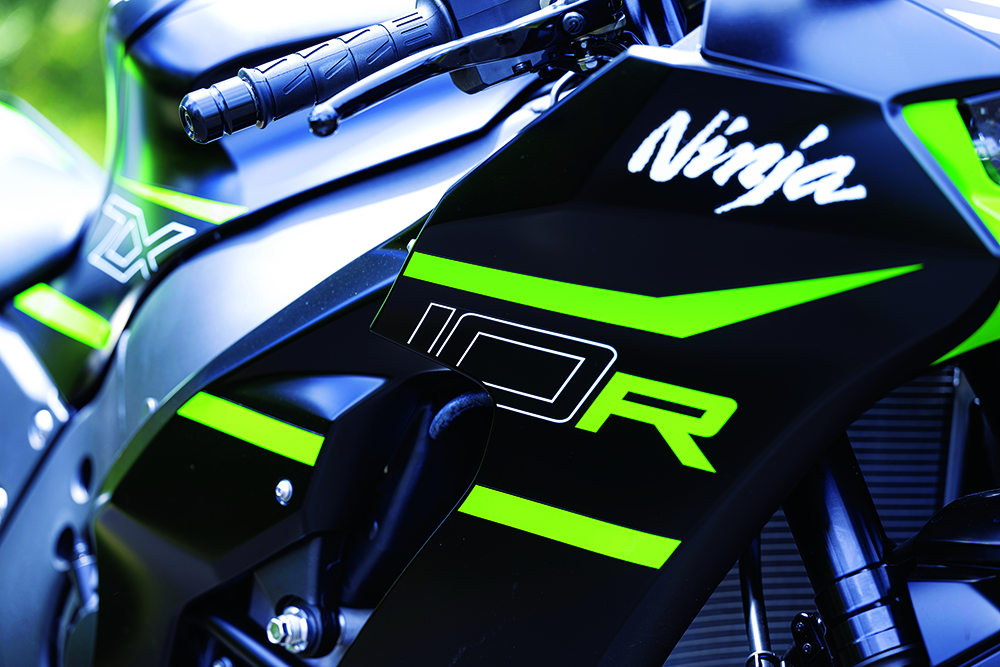 Like all bikes in this category, the 10 is a pretty average roadbike unless you have short snappy trips at breakneck speed in mind. If you don’t have frequent trackdays featuring on your to-do list there are far more versatile, comfortable and economical rides around.

But the ZX-10R doesn’t and shouldn’t apologise for that. Its mission in life is to do fast and, in a world full of bikes with marketing hype that claim go-anywhere versatility, it’s actually refreshing to ride a bike that’s unashamedly focussed on just one thing – being fast!