Lower spec and less expensive than its predecessor, but don’t go writing off Triumph’s latest Tiger too soon

It’s just seven degrees outside, and I have a ton of jobs to do around the house which I can’t – and shouldn’t – put off again. But instead of knuckling down to some DIY in the warm, I’m trying to find the key to Triumph’s new Tiger 850 Sport and hoping the wife will understand when I’m gone for a few hours – it is work.

Like a child with a new toy on Christmas day, I can’t leave the 850 Sport alone, it’s such a great bike and far more enjoyable than I was expecting. Yes, it may be a diluted version of the Tiger 900 that it replaces, but it hasn’t lost any of its spirit. Like beer with no booze? Or Bond without a car chase? Anything but. 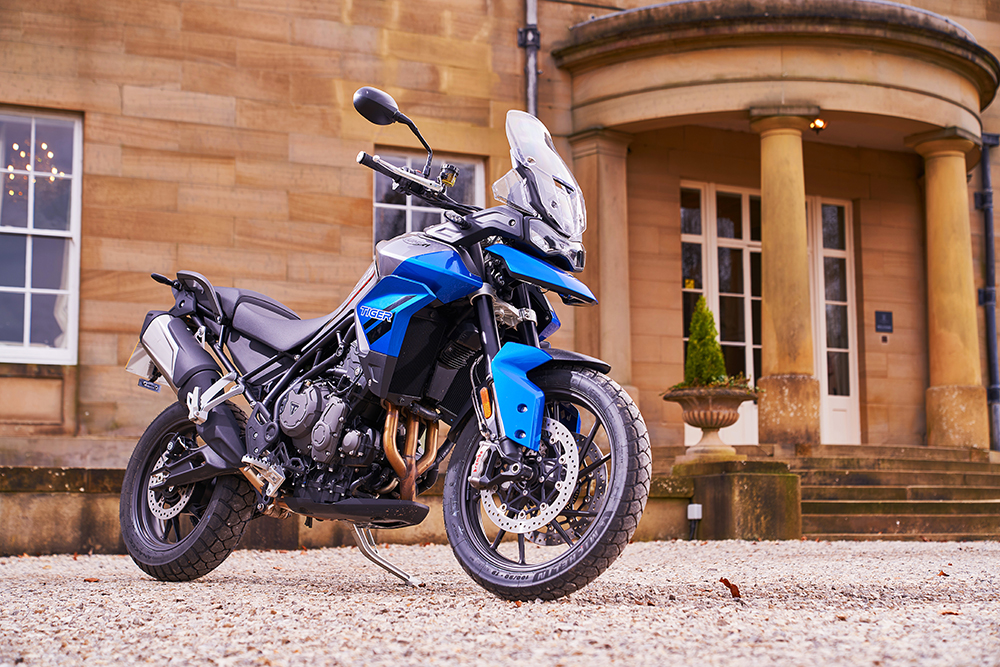 For 2021, Triumph has introduced an all-new Tiger, the 850 Sport, which replaces the standard Tiger 900. It shares many similarities with the 900, but Triumph has trimmed the spec to make it more affordable, and tweaked its tune to make its power-delivery more relaxed and road focused.

Both the lean-sensitive rider aids and the IMU have been removed, replaced instead by conventional traction control and ABS, while the suspension is no longer fully-adjustable. However, this lower specification is reflected in the price – $15,990 (plus on-road costs), which is over $3000 less expensive than the base Tiger 900 GT ($19,050 plus on-road costs). 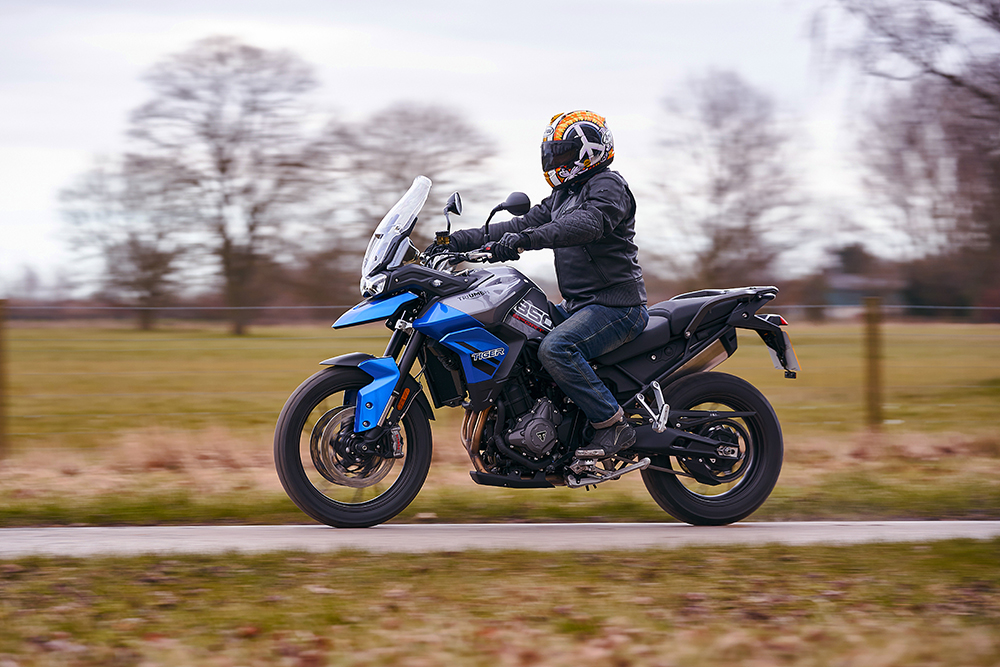 On price alone it’s tempting, and after our first ride I can tell you the words ‘base’ and ‘entry level’ shouldn’t diminish your excitement for this new model. It may just be the most surprising, underrated bike of 2021.

The Tiger 850 has the same engine capacity as the Tiger 900 range, 888cc, but has been detuned electronically to make the bike more accessible for new or inexperienced riders. Peak power is now 62.5kW (84hp) @ 8500rpm, compared to 70.1kW (94hp) @ 8750rpm on the older Tiger 900, and peak torque has been reduced from 87Nm @ 7250rpm down to 82Nm @ 6500rpm. On paper a noticeable drop in power, but those peak power and torque figures are produced lower down in the rev range, therefore making the new bike feel lively as well as more usable. 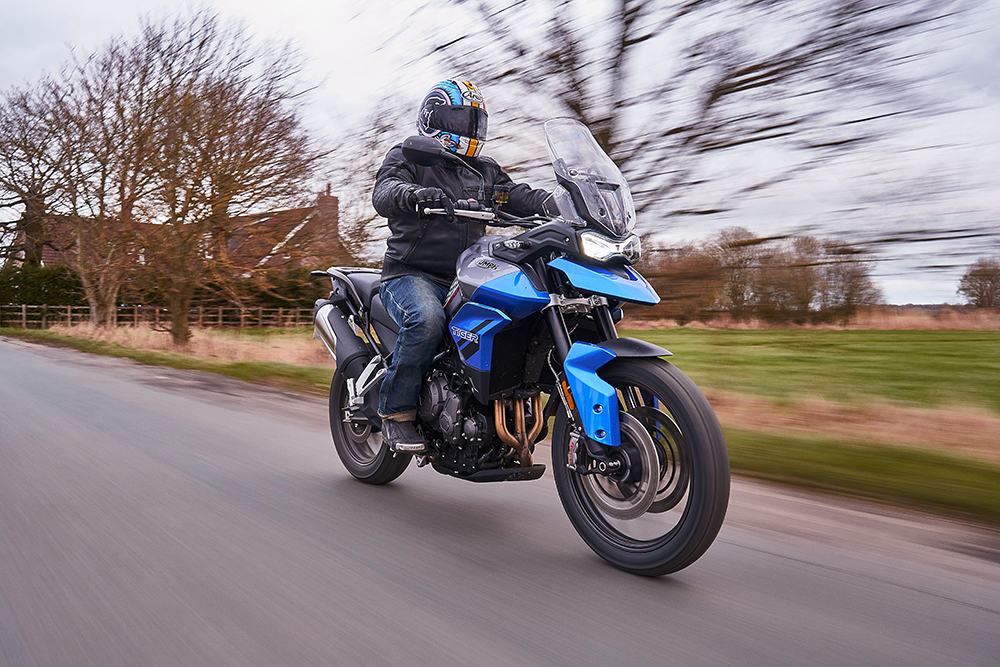 The Tiger 850 shares the same novel T-plane crank as the 900 with a 1-3-2 firing order that gives the British triple a unique sound – a throaty rasping noise – which also adds personality. All too many Euro-5 compliant bikes, of which the Tiger 850 is one, sound dull and soulless, but not this one. I’m unsure how Triumph has managed it, but it sounds good for a stock bike in 2021.

The throttle delivery is liquid smooth and effortless. At slow speeds the connection is soft, which makes riding a doddle around town, especially when performing tight U-turns. As mentioned, Triumph has moved the meat of the torque lower down in the revs compared to the 900, and you instantly feel that. There is lovely, useable drive on tap at low speeds, which then builds strongly when accelerating. 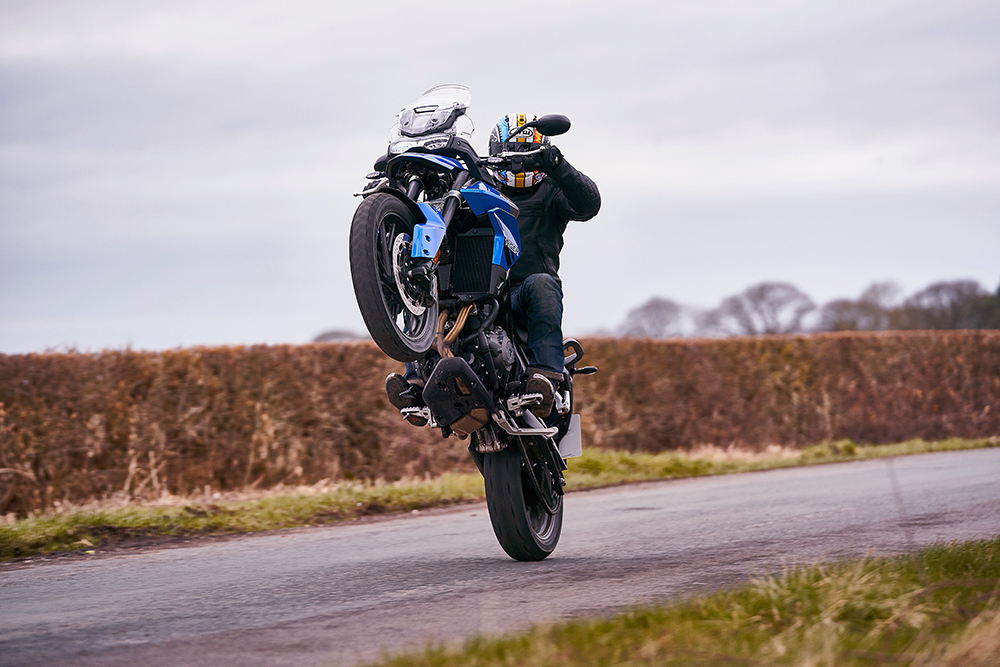 While the 850 is 8.6kW down on the 900’s peak and noticeably down on torque, that’s only when you’re in the top quarter of the rev range. For the vast majority of my – and I suspect your – time on the bike, I was nowhere near full throttle so I never felt short-changed by the power drop. With the traction control switched off and with the assistance of the clutch, there was still ample power to lift the front wheel in second gear, which might not be a particularly scientific approach to engine testing but it does show the new Tiger doesn’t want to go to bed at 9pm with a hot chocolate.

Even when I danced around on the smooth gearbox and started to explore the sporty side of the Sport’s handling, I never felt underwhelmed. However, I’m below average height and weight, and I didn’t try it two-up or with the optional luggage fitted, so I was experiencing the Sport’s power-to-weight at its best. It felt a little buzzy at 150km/h, just above 6000rpm in top, but who’s going to spend too much time there and keep their licence? Fully loaded and two-up, some people may miss the extra poke of the 900 – but that’s only if you experienced it recently. 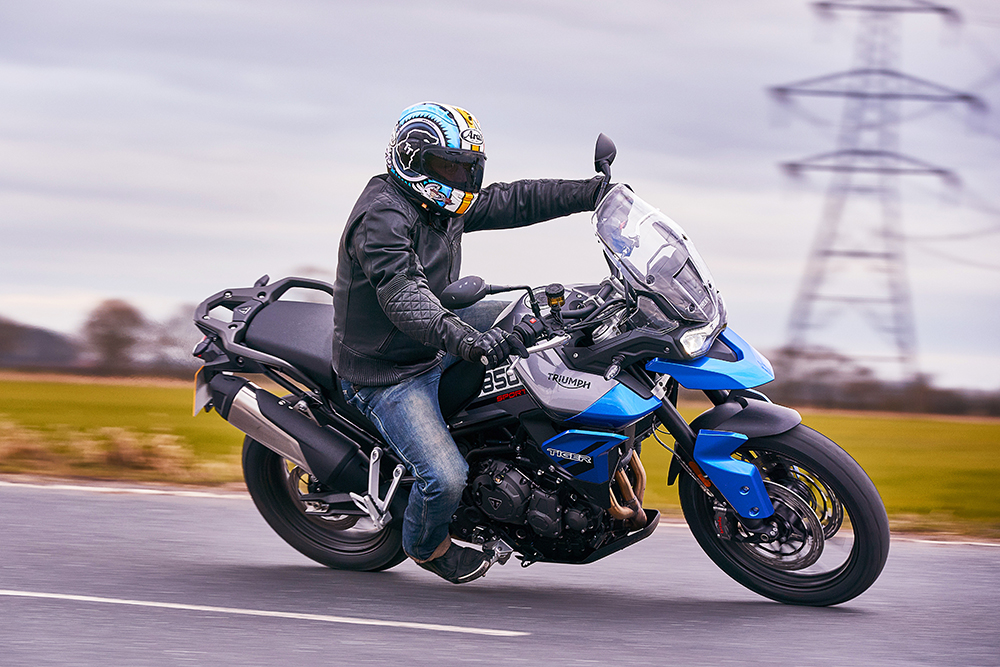 For everyday riding most riders – especially inexperienced riders at whom the Tiger 850 is aimed – will find the power more than sufficient.

There are two riding modes to choose from, Road and Rain, both with dedicated throttle maps and traction control, while ABS remains constant in both modes. Rain still produces full power but with softer power delivery and more intrusive traction control. Frankly, the power delivery is so soft and forgiving in the normal Road mode that Rain is hardly needed, but I guess some may prefer the added security and margins it provides. 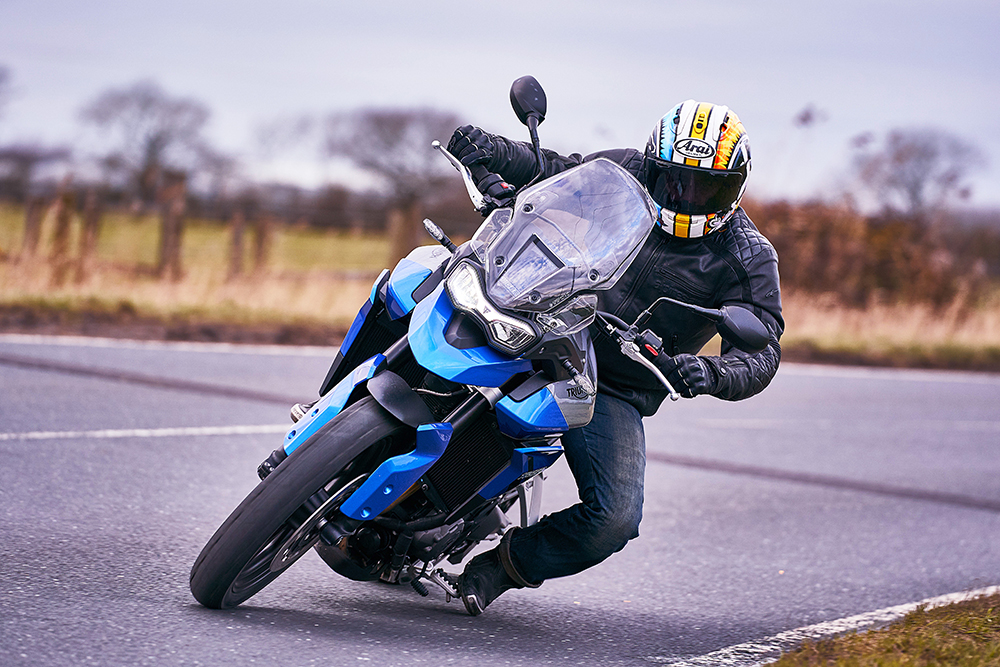 For mile munching, comfort is excellent. The screen height is manually adjustable (by 50mm) and just about doable on the move, while wind deflectors on either side provide decent wind protection. I spent the majority of the test with the screen set to its lowest settings (again, I’m on the shorter side). The seat and ’bars are both adjustable, and on standard settings the wide bars, low pegs and comfortable seat were virtually faultless compared to similar bikes in the category. Cruise control was missed, as were a quickshifter, heated grips and hand guards on those cold mornings, but we have to remember that $15,990 price tag.

Triumph quotes 5.2L/100km for fuel consumption, whereas I averaged 6L/100km, although this was mainly on country roads and avoiding the motorway while making that triple sing (it really does sound good…). On a well-behaved run, I averaged closer to 5.65L/100km, but still not the figure claimed by Triumph. But that isn’t bad, and while the 20-litre tank gives a theoretical range of around 400km, it will be at around 320km or just below when you need to start thinking about fuel. 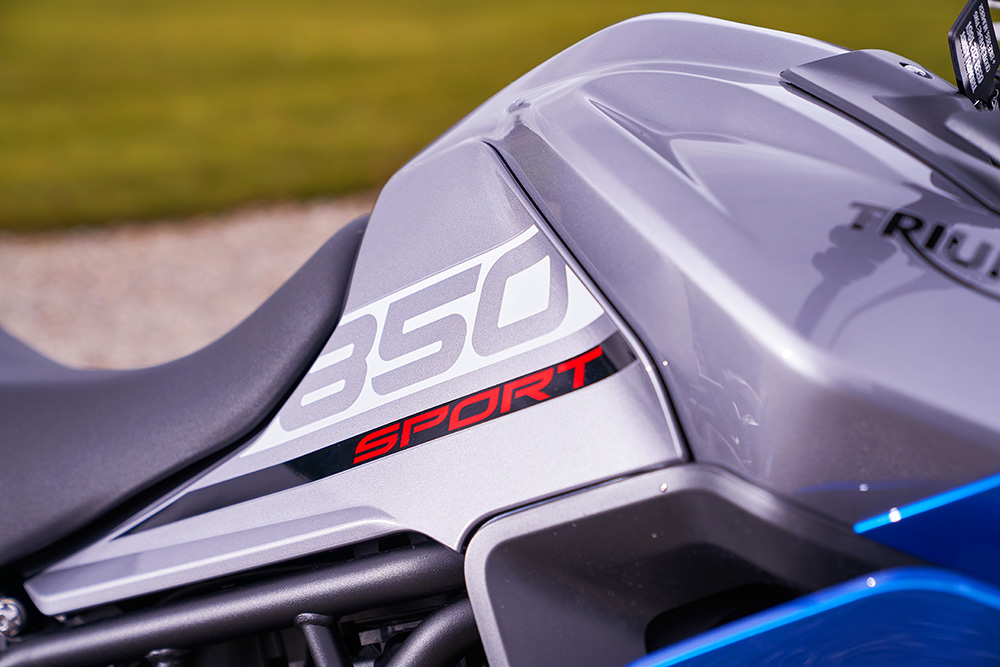 And covering those sort of kays in one stint certainly shouldn’t be a problem in terms of comfort. That high-speed buzz that becomes noticeable at 6000rpm and above is felt primarily through the pegs and increases with the speed. It’s not annoying but is worth commenting on.

As you’d expect, to save costs over the more expensive Tiger 900 GT, the 850 gets reduced suspension specification, with no adjustment on the front and only preload on the rear – though the adjuster is remote and easy to access. As with the engine, I was expecting a sharp drop in performance, but the road-tuned Marzocchi 45mm up-side-down fork up front and Marzocchi rear shock gave high levels of feedback and support for this type of bike with long-travel suspension, (170mm – 180mm). The Michelin Anakee dual-purpose rubber worked well from the off, offering impressive feedback in the cold, damp and dry – a truly universal tyre. 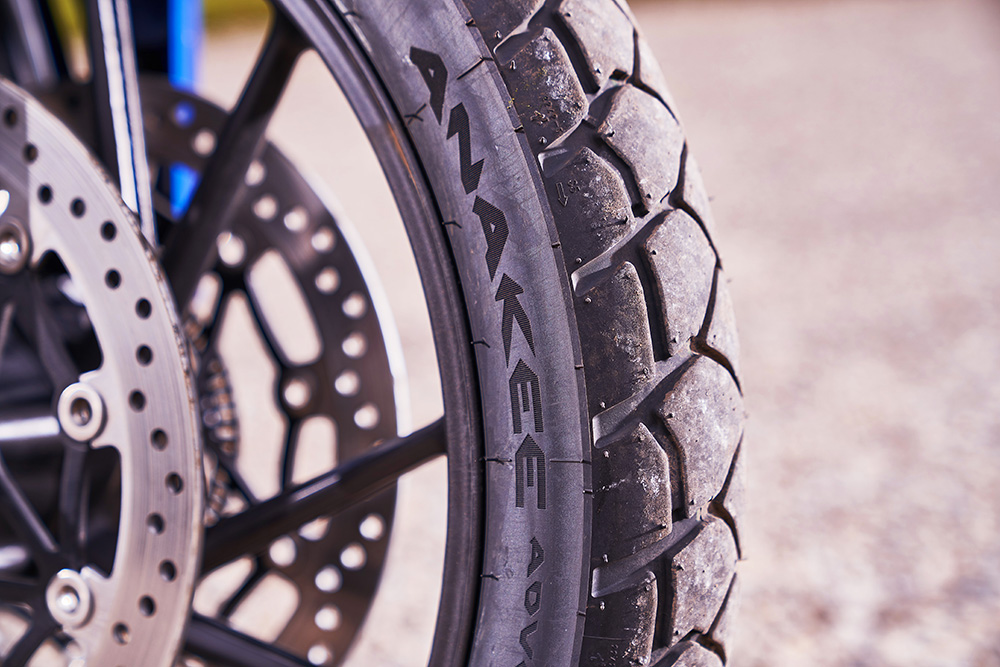 Within a few miles the Sport and I clicked, meaning it felt like my bike, one I’d owned for a year or so, and I was all-too happy to throw on its side to almost peg-scraping levels of lean. It made me full of confidence.

Yes, I made the mistake of underestimating the Tiger 850 Sport and how much riding fun it can deliver. The wide ’bars allow you to throw it around with relative ease, and it remains unfazed by terrible road surfaces and slimy conditions. When I challenged the Sport with poorly-surfaced and even unclassified roads, at speed, it remained stable and unperturbed. 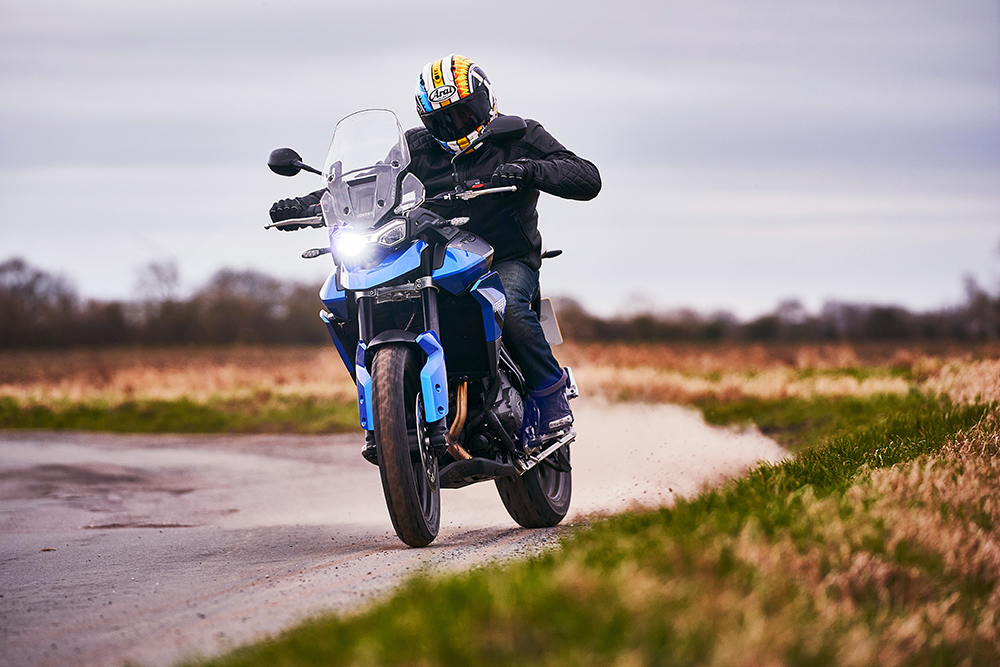 The higher the road speed, the more the front end starts to lift a little and the rear sits, and the more aware you become of the Sport’s adventure dynamics, particularly its long-travel suspension and large 19-inch front tyre. It doesn’t understeer or run wide, but it does take more effort to flick from side to side when you’re hooking in.

At low speeds and around town, there’s a nice balance to complement the smooth fuelling, plus a natural seating position and ergonomics that make it ideal for less-experienced riders. This Tiger isn’t a tiger at all because it’s about as intimidating as a kitten. But I guess very few people would buy a bike called the Kitten 850. 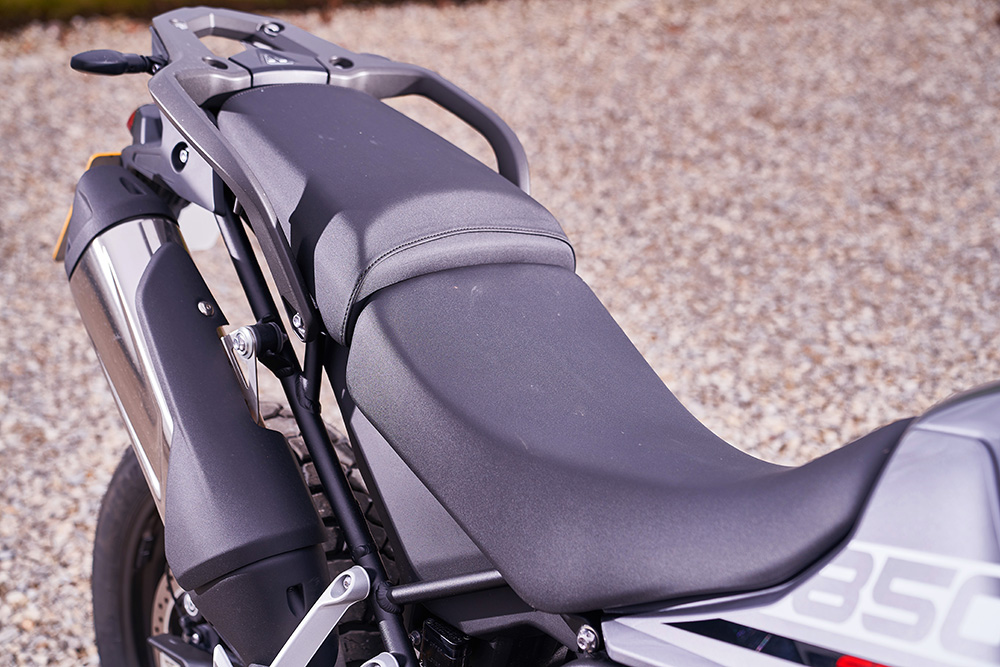 Triumph describes the Tiger 850 as a road-focused adventure bike, and despite the dual-purpose rubber, it was never really designed to take on anything too serious off-road, especially with its cast-alloy wheels. Light off-road work on easy gravel trails is just about within reach, but don’t attempt anything serious. You’ll have to opt for the off-road biased Tiger 900 Rally if you want to take on some real off-road.

Stopping power is impressive. Did someone at Triumph tick the wrong box when they were ordering brakes from Brembo? Why have they fitted top-spec radial Brembo Stylema four-piston calipers? Maybe there was a special from Brembo on a Friday afternoon… 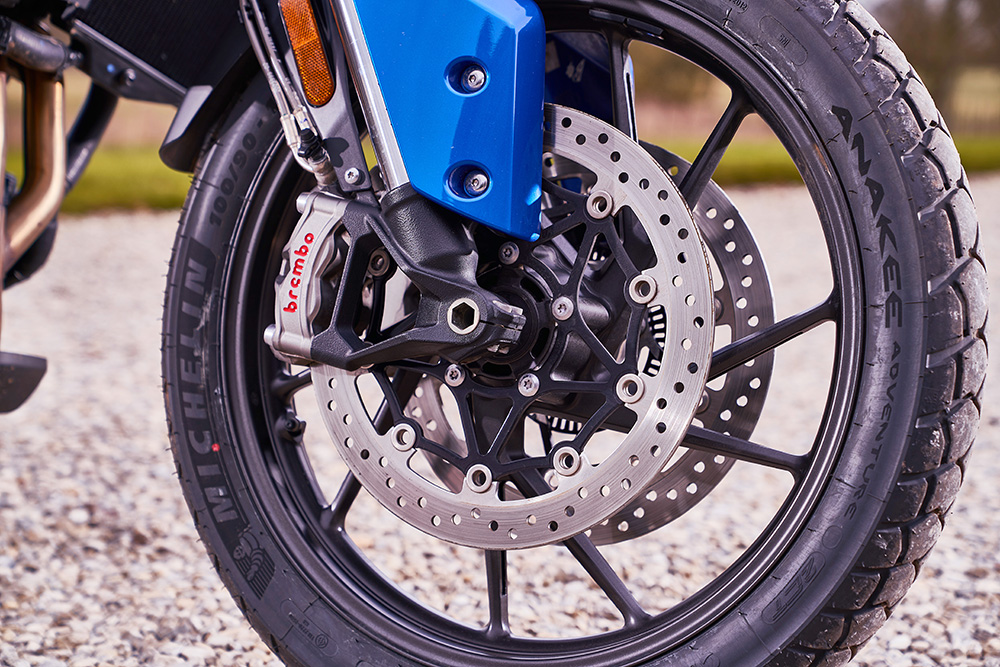 I’m not complaining, far from it – the better the brakes the happier I am. Obviously, the same brakes that are fitted to some superbikes haul up less than the Sport’s 200kg (192kg dry), and on the Triumph are far from being too sharp or aggressive; and, no, they don’t throw you over the bars with one finger resting on the lever… Meanwhile, the ABS isn’t intrusive. 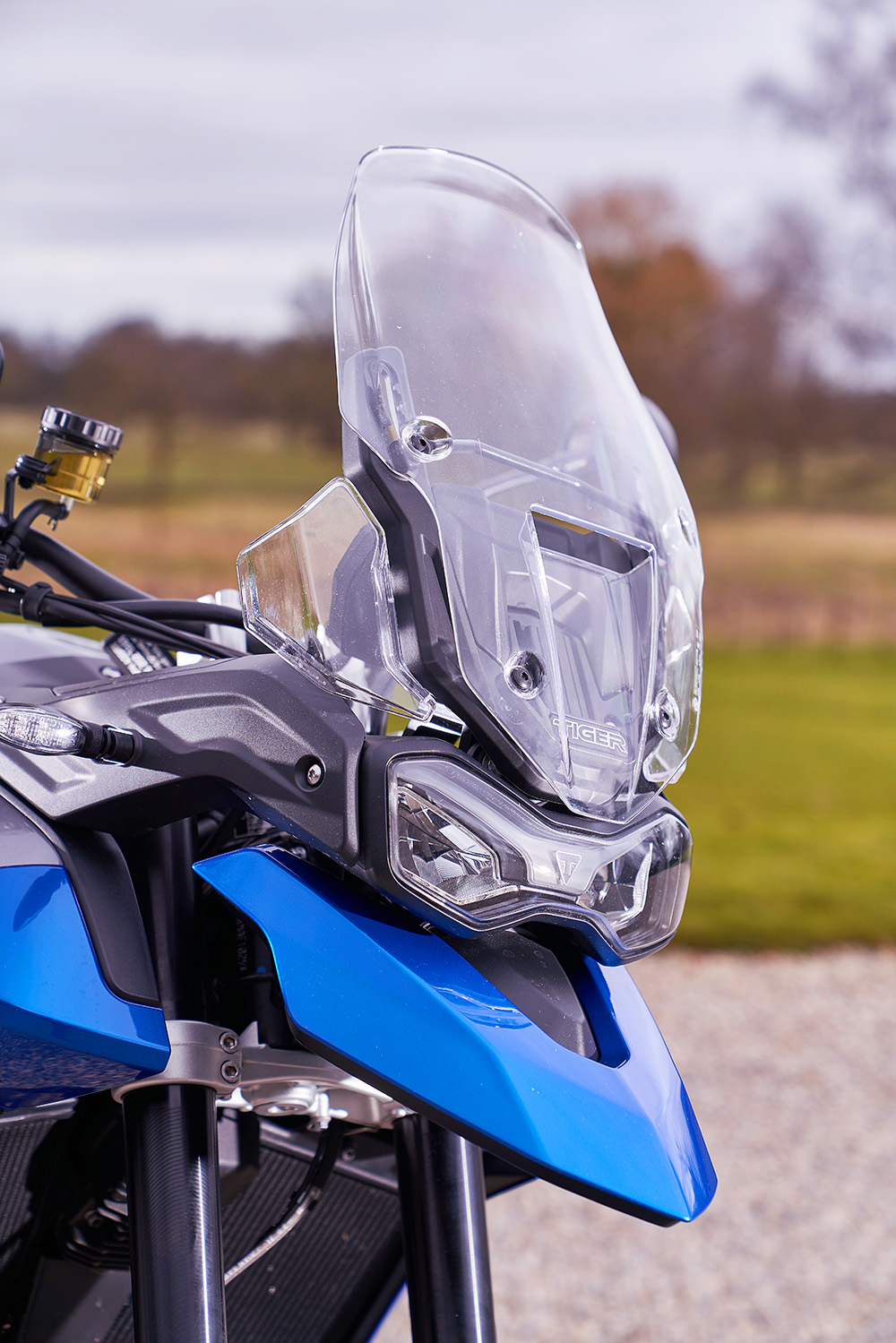 There are two sides to this argument. One, the Tiger 850 is aimed at a certain type of rider, one who’s not likely to be peg scraping on every apex and chasing a stopwatch. Additionally, the Brembo Stylema brakes are excellent, the standard ABS (just monitoring wheel speed) is also superb, and do you need lean-sensitive traction control on a bike with 70kW and excellent mechanical grip?

The counter-argument is that the Tiger 850 is aimed at new riders who would appreciate the safety net of cornering ABS and TC, especially as they are more likely to make a mistake. 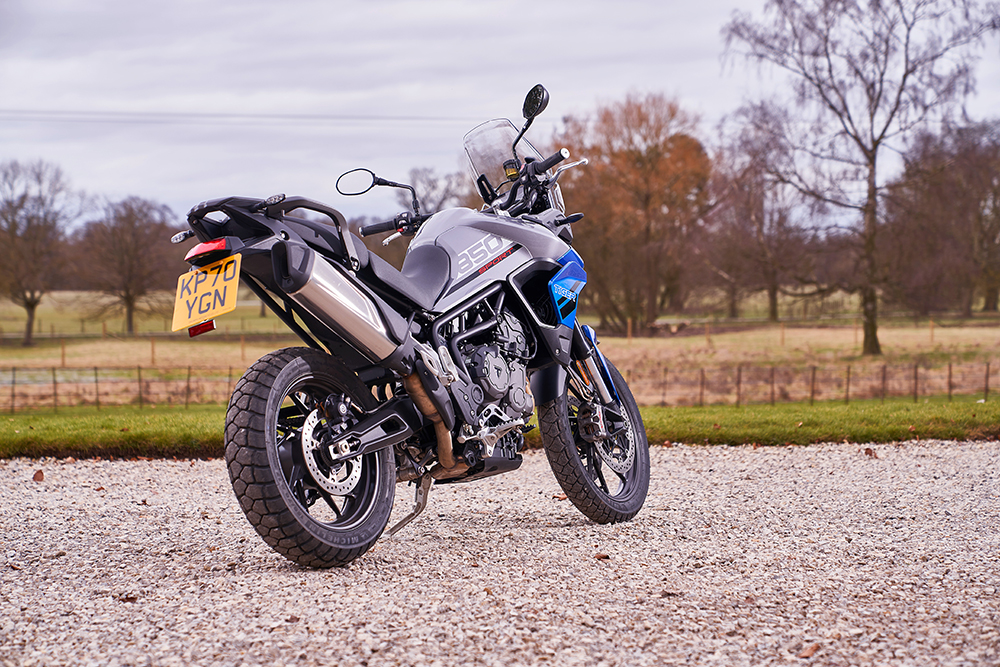 Personally, I think the Rain mode is enough to keep new riders safe in tricky conditions. It softens the delivery, increases the traction intervention and the standard ABS is more than enough – but again I’m experienced and a new rider may be looking at the specs and lack of IMU with a little trepidation.

Considering the new bike’s accessibility in terms of price, the switchgear and 5-inch TFT instrumentation are of a high standard. I really like the clocks, the ability to change the style and looks is a nice touch. In fact, the overall finish is a high quality, with the full LED lights and DRL a spec higher than the 900. 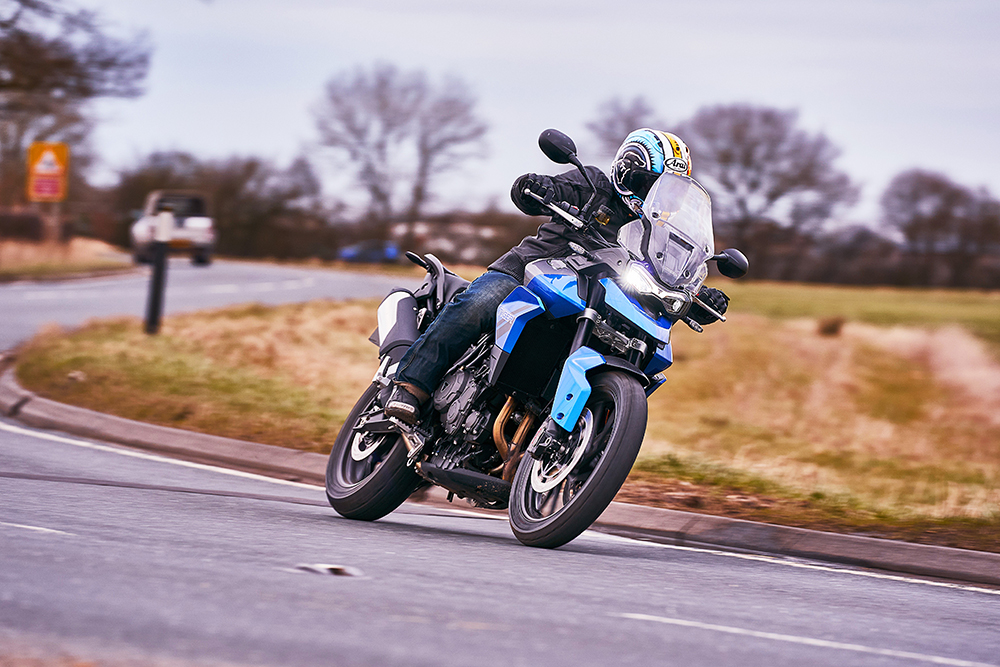 There are 60 accessories to select from including a low, 790mm seat option and a range of hard luggage, plus the usual cosmetic trinkets. I think the quick-shifter would be a nice touch – oh, and heated grips, please.

I thought I would feel underwhelmed by the Tiger 850 which, put simply, is a de-tuned Tiger 900. But I didn’t; it was a satisfying surprise. The lovely-sounding triple has real-world performance and loads of useful torque. It’s fun and lively, while the handling, much like the engine, is far more able than I was expecting. The Sport may be relatively basic, but it works and for this type of bike it’s hard to fault, especially when compared to the similar competition. 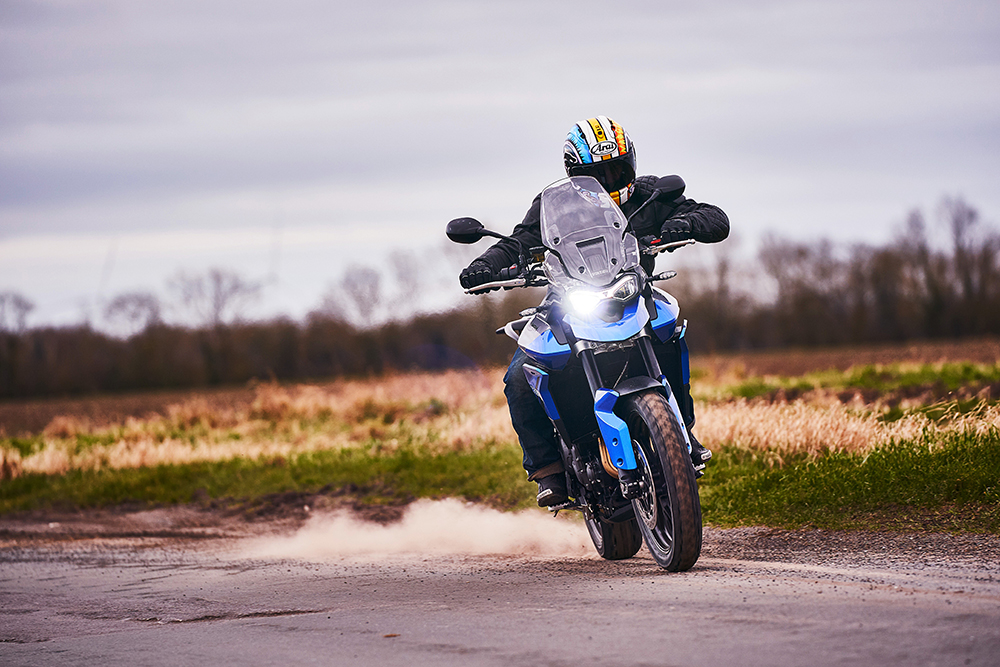 The Brembo stoppers are top-notch, while the clocks and styling are neat – this is an impressive package at an affordable price. If a friend was looking to come back into biking or had recently passed their test and was attracted to the adventure market, then I’d recommend the Tiger 850 for a test ride without hesitation. It’s a versatile, fun bike, which even has some character to it. It will be interesting to see if new buyers are put off by the lack of advanced rider aids – they shouldn’t be. 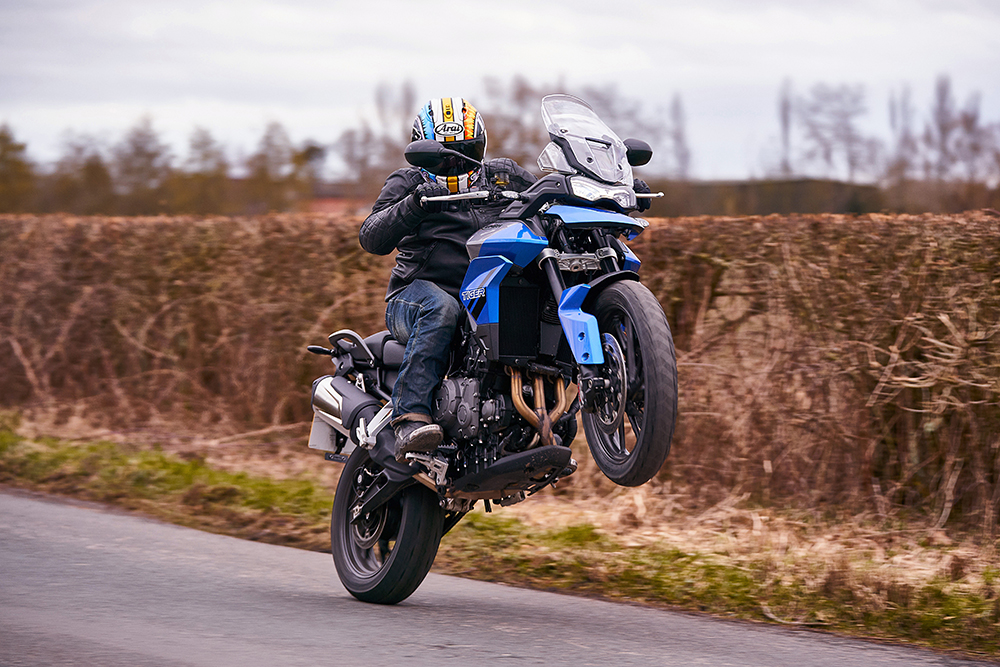