After a weekend of rain, wind and grey skies, Sunday finally dawned bright at Phillip Island, and Warm Up saw laptimes lower for the majority after a mixed Saturday – as the skies remained perfect blue above the Moto3 grid lining up to race.

An original race saw crashes early on for some of the frontrunners – including key protagonists of the Rookie of the Year battle Joan Mir (Leopard Racing) and Nicolo Bulega (Sky Racing Team VR46) – with a crash at Lukey Heights then seeing John McPhee (Peugeot MC Saxoprint) crash out and collect a number of other riders – including Jorge Navarro (Estrella Galicia 0,0) and Enea Bastianini (Gresini Racing Moto3). The red flag came out, with a re-started race set for a distance of ten laps.

Bastianini was unable to make the restart, but Navarro lined up once again for the new race – as did Fabio Quartararo, with the Frenchman once again starting form the back after having been disqualified from his P2 qualifying position due to a technical infringement. Having fought up into second before the red flag, the Leopard Racing rider then faced the prospect of doing the task all over again.

The restart saw Binder and Locatelli escaping at the front, before the South African 2016 Moto3 World Champion began to pull away, leaving Locatelli in a lonely P2. Further back, the battle for third saw riders heading into Doohan Corner eight wide, with the classic Moto3 freight train creating a 16 rider battle to complete the podium.

Quartararo was unable to repeat his heroics from before the race start, and there were further crashers who then were out of podium contention – including Jorge Navarro after a touch from Bo Bendsneyder (Red Bull KTM Ajo), and Turn 4 casualty Niccolo Antonelli (Ongetta-Rivacold). Brad Binder’s younger brother Darryn (Platinum Bay Real Estate) then saw the penultimate lap of the race become a duel for the podium with Aron Canet as the two broke free from the group slightly. Canet just took the honour with a slipstream over the line, with Darryn Binder nevertheless taking his career best finish in P4. 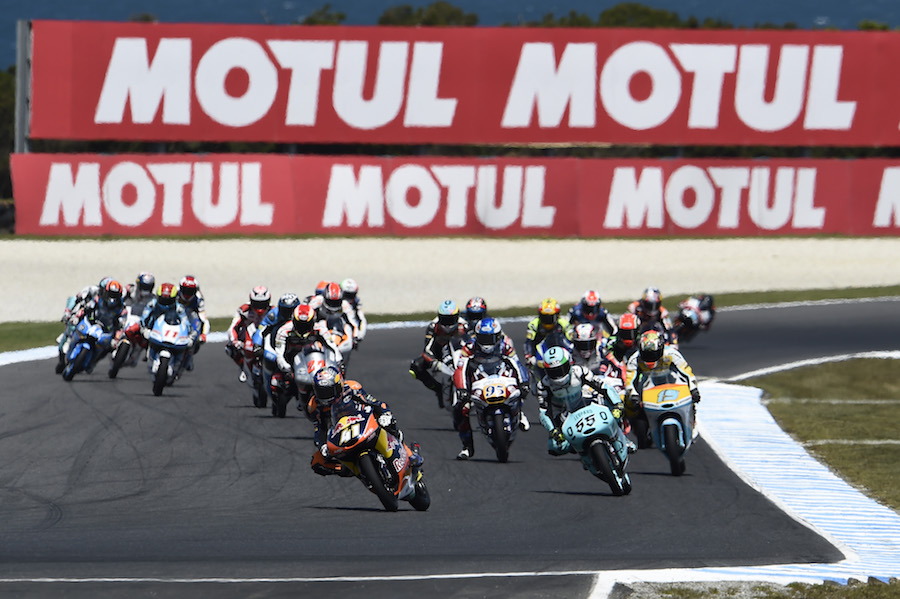 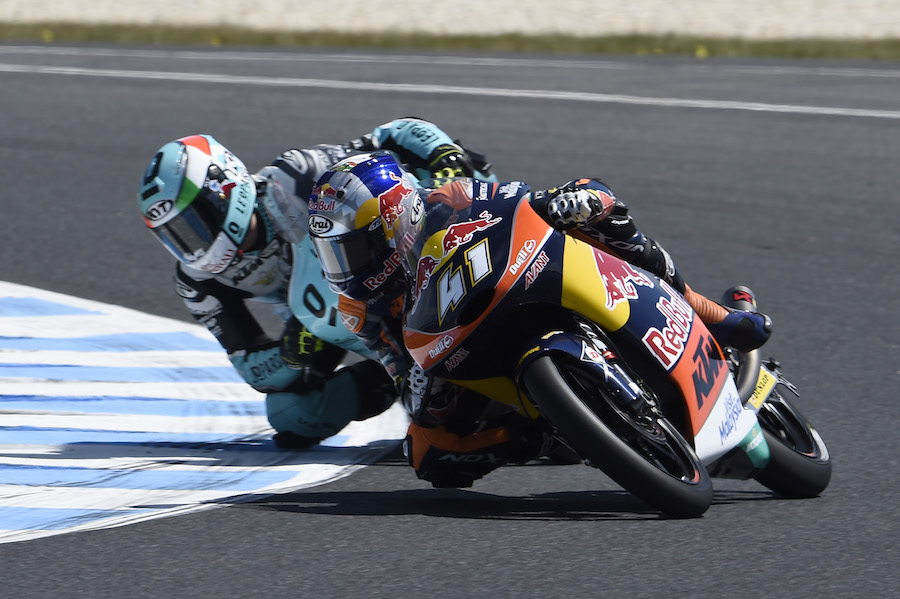 Third down to tenth was covered by just over seven tenths of a second in the incredible battle – with Fabio Quartararo in P12 still within a second of the podium. With DNFs for so many of those in the top echelons of the points standings, Binder stretched his lead in the Championship – although already crowned Champion – with Bastianini and Navarro not scoring in the fight over P2, and all three riders locked in the battle for Rookie of the Year – Mir, Fabio Di Giannantonio (Gresini Racing Moto3) and Bulega – were also all unable to see the flag.

Another incredible battle will see Moto3 take over Sepang International Circuit next weekend, as the slipstream specialists take on the incredible final straight, Turn 15 and main straight combination – with a new track surface and some new cambers.