They’re small, light, affordable, and according to some, cool. But what the hell are they for?

I’m not entirely convinced I’m the guy for this job. For starters, I’m a metre taller and a kilo heavier than Honda’s Grom. It, and Benelli’s novelty-sized TNT 135 are bikes for spotty-faced, short people with newly acquired licences, aren’t they?

Honda has sold over 3000 Groms since its arrival in Australia in 2016 and, despite remaining unchanged apart from being available various shades of ‘shit, that’s bright’, continues to sell bucket loads. With such decent sales figure it’s no surprise that other manufacturers might have wanted a piece of that lucrative micro-bike pie. Kawasaki released its Z125 Pro the same year, and then Benelli swaggered onto the scene two years later with some Italian design flair, adding the TNT 125 to the fray, swiftly followed by the updated 135cc last year.

We’ve tested all of them individually, but there’s always been that question about which one is best. It’s a pointless question – best for whom? And for what? – but one that gets asked by most people that are looking at one of these fun little machines.

Unfortunately, Kawasaki didn’t have a Z125 available for the window we needed it, so that left the Grom and TNT to go head to head in the hands of a couple of middle age blokes because, as far as I can tell, that’s exactly who doesn’t buy these things. 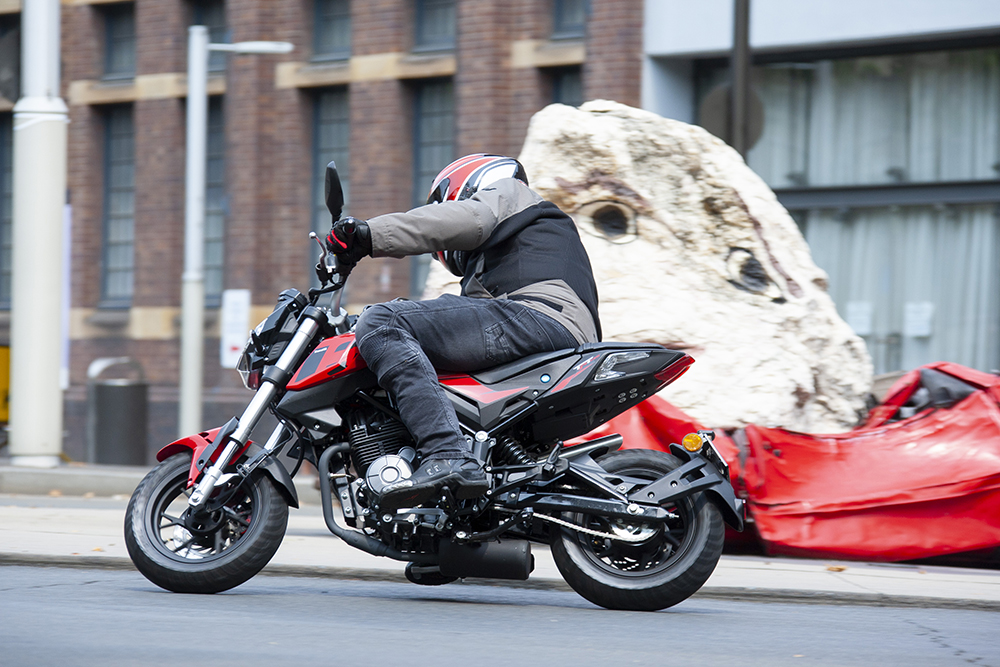 Sam and I agreed to meet at 8.30 on a weekday morning, right in the guts of Sydney so we could put the commuting capabilities of each bike to the test in the delights of Sydney’s peak-hour traffic. I live in the western suburbs, so had the opportunity to use the M4 motorway to get to our rendezvous. With an annoying head wind I struggled to get my spacious surface area up to 100km/h, until I caught the draft of a B-double, and with its help I managed to get the 124cc, two-valve, SOHC Grom up to an indicated 104km/h.

The Honda runs a four-speed box and at 104km/h doesn’t feel like it’s got much more to give. I continually reached for another gear and the addition of five-speed ’box would be a bonus for its usability.

The 135cc, four-valve, SOHC Benelli on which Sam was making his way into town benefits from a five-speed ’box, and on my return journey on the Benelli I saw 105km/h on the LCD dash – without the truck – and even then it feels like it’s got a bit more up its sleeve.

The extra cubes and cog really make a difference when getting off the mark. It’s punchier off the lights compared to the Honda, which requires substantial clutch fanning if you want to get away quick. But when generally tooling around town, despite its 10-percent capacity disadvantage, the Honda feels a tad stronger in the low- and mid-range, and only runs out of puff compared to the Benelli in the higher end of the rev range.

The Benelli weighs in at 124kg wringing wet, while the Honda tips the scales at 104kg, so you’re looking at a significant difference. The weight disadvantage coupled with similar torque figures – 10.8Nm for the Benelli compared to 10.7Nm from the Honda donk – probably explains why the Grom feels stronger in the usable torque range. Braking also suffers as a consequence; both bikes run an identical non-ABS equipped Nissin brake setup, but both the initial bite and stopping power of the Honda feels just a little stronger. And the extra weight is even more stark when you push the bikes around your garage. 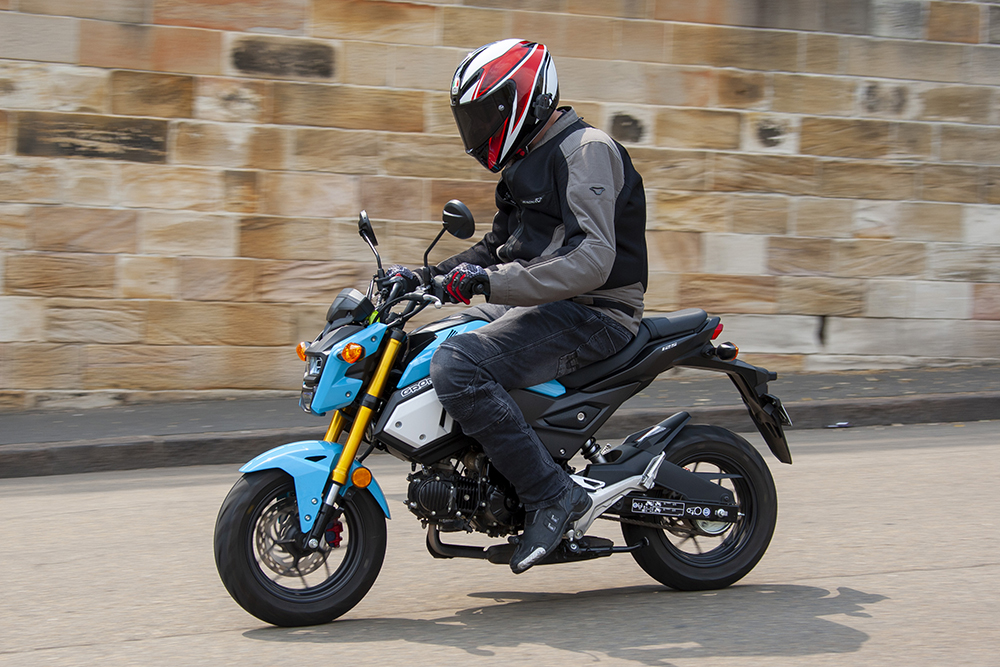 Both bikes run 12-inch wheels, and if you’re used to riding bikes with larger-diameter wheels, both machines can feel a bit nervous, especially through bumpy turns. The Honda employs a 31mm upside-down fork while the Benelli gets a hefty 41mm upside-down setup. In the handling stakes, the Benelli’s 20 extra kilos, combined with the chunkier fork and 15mm longer wheelbase means hooking through turns happens in a much more stable fashion.

The Benelli has more of a ‘full-size bike’ feel from the cockpit, it’s roomier to sit on, and at 780mm the seat is 20mm higher than the Honda’s. Although roomier doesn’t always mean more comfortable, and the shape of the Benelli’s 7.2-litre tank had our knees pressing on the angular sides rather than below them. The contours of the Honda’s 5.7 litre tank are bang on the money for my sized frame and also for the more compact-dimensioned Sam.

The Benelli runs a full LED light package, but the integrated indicators are far too dull and the taillight, while bright, is poorly angled and harder to see than we’d like. The Honda’s old-school incandescent setup is bright and easy to see.

After a coffee, and with the worst of the peak hour traffic settled somewhat, we headed out onto the mean streets of Sydney, fanging through the labyrinth of alleyways and narrow lanes in Surrey Hills, through The Rocks, under the Harbour Bridge and through Circular Quay in search of answers. 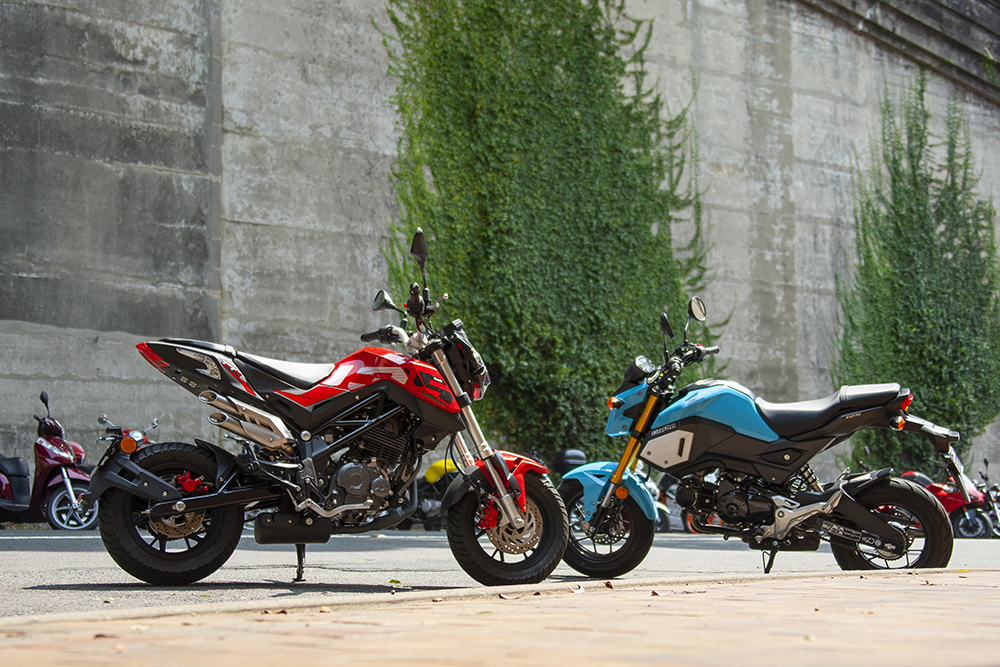 Both these little devils are small and light enough to lane split very effectively and navigating stagnant Sydney traffic is a cinch.

Some words of advice for new players, though. Firstly, nobody wants to be beaten by a pint-size bike off the lights. The red mist comes over front-of-grid drivers and they absolutely must beat you, no matter what.

Secondly, make sure you’re in the right gear when you’re filtering to the front of the queue; sloppy gear choices will have you swallowed up by tin tops, neither the Honda or the Benelli has the ponies required to get you out of trouble. Thirdly, both bike’s mirrors seemed to be at the exact height of every car, ute and bus mirror in Sydney.

There’s also the niggling sense that you just can’t be seen as well as a normal size bike. I didn’t have any noticeable increase in issues associated with inattentive drivers, but I was mindful of the need to be seen and I rode accordingly. Like any bike, you best bring your A-game if you’re going to play in the traffic.

But it’s not just the pair’s traffic-carving credentials that make them appealing. It’s also their anti-aging properties, and just like a tub of Oil of Ulan’s best anti-wrinkle cream, these two can have you feeling like a younger version of yourself as quick as you can say “the secret of younger looking skin”. These two are guaranteed to bring out your inner hoon. Every corner must be taken at full noise, every manhole cover and speed hump is a jump and every red light an opportunity for a stoppie. 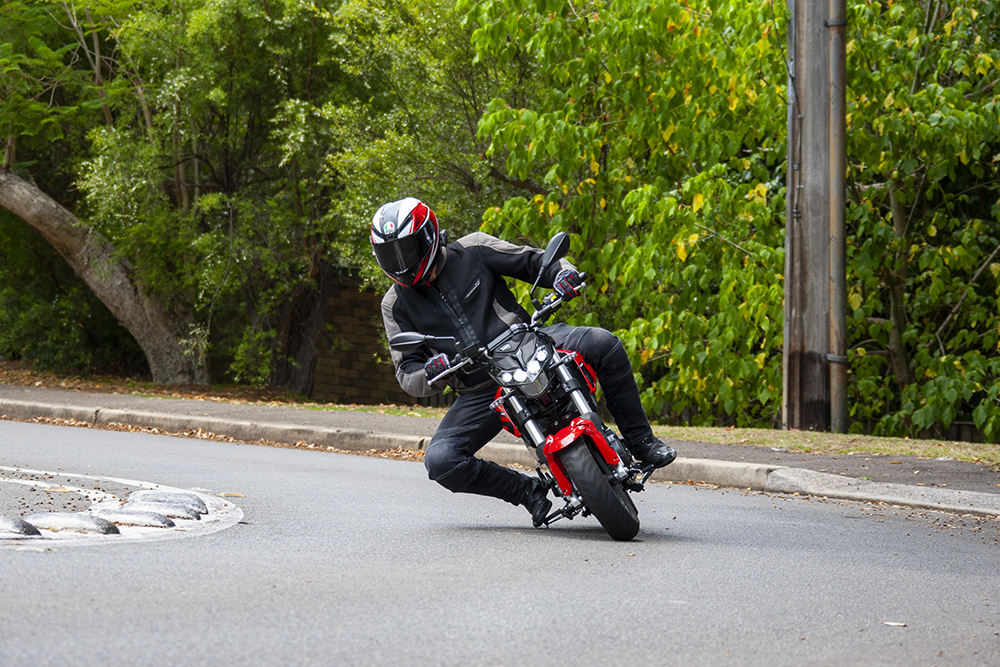 And that’s the difference between bikes like the Grom and TNT 135 compared to, say, a scooter of similar capacity and price. If you can’t have fun on one of these, you should check for a pulse.

The Honda’s suspension is non-adjustable at both ends but handled my bulk without too much trouble, but in an ideal world some preload adjustment on the rear may reduce the Honda’s tendency to chamfer the edge off its exhaust system on right-hand turns. The Benelli sports non-adjustable forks up front but is kitted up with a preload adjustable rear shock.

The TNT certainly likes to scrape its foot pegs when the cornering gets enthusiastic and left-handers have the side stand fashioned into a new shape. Neither bike have footpeg springs fitted, so if they get folded up, they remain up. This happened a couple of times on the Honda and many more on the Benelli, as you tend to flick the left peg up when putting the sidestand up. I know both bikes are built to a budget, but really, scrimping on a couple of springs?

Long-haul rider comfort is surprisingly good, as neither saddle gave me a sore bum or cramped legs, although with their penchant for scallywag behaviour, you don’t really stay put in the seat much.

We spent the day running amok in various parts of Sydney. And with another three weeks under my belt of tearing around my local neighbourhood, the odd trip out to Wisemans Ferry and the untimely death of an unfortunate bin chicken, I can safely say that both the Benelli and the Honda are an excellent and affordable short-distance commuter. 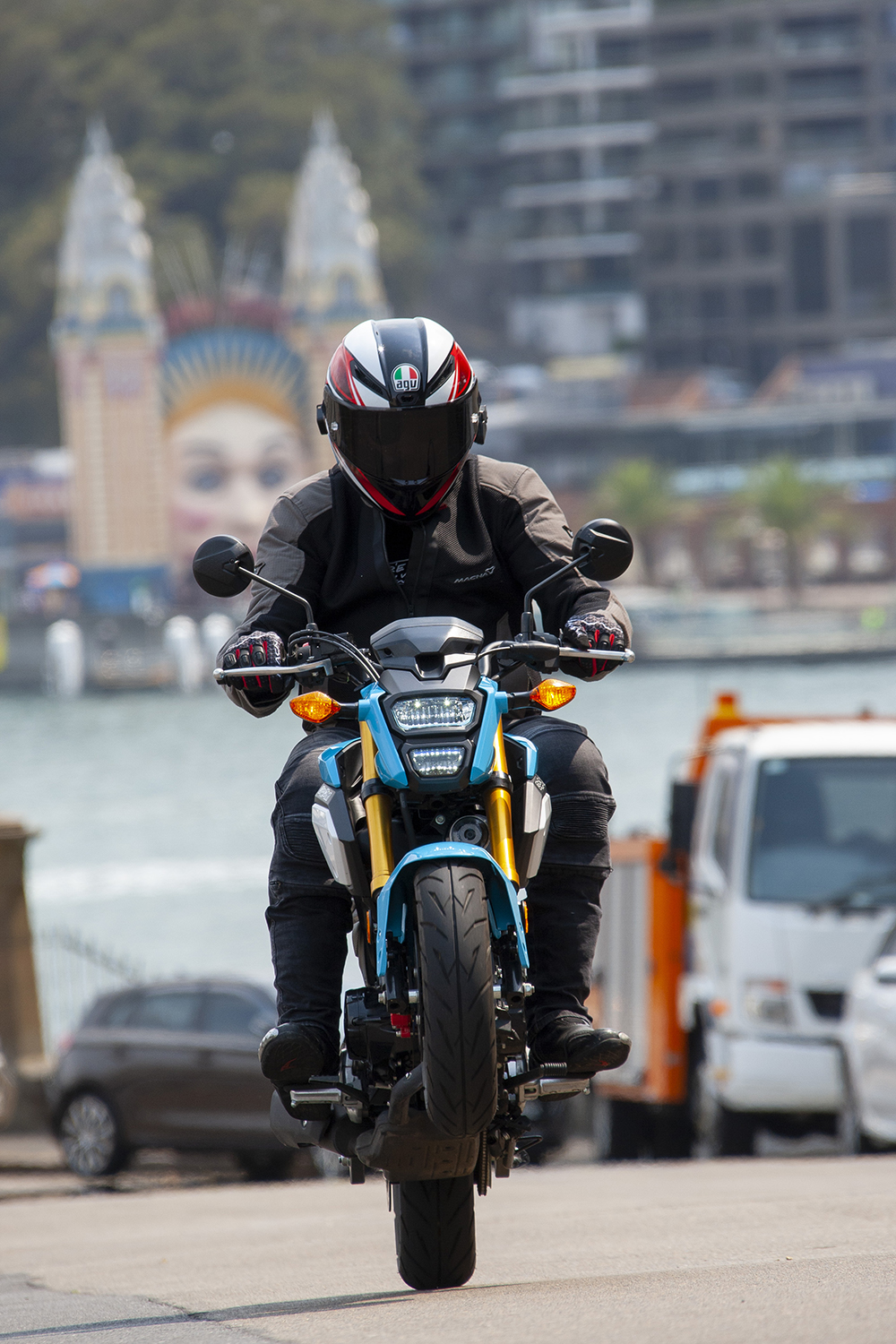 And there are plenty of affordable short-distant commuters which are arguably more practical and slightly more affordable. But if you want to tack fun onto that list, then there’s not many bikes that fit the bill as well as these two.

Which one is best? That really does come down to personal preference, and I probably preferred the slightly more expensive Honda. It’s 300 bucks more than the Benelli at $3699 (plus on-road costs), but just a little bit nimbler due to its lower weight and its ergonomics fitted me better, despite being physically smaller than the Benelli. And if I parked one in the shed, I’d use it for mug lair behaviour and screaming down to the shop.

But if I had to choose one to carry out my everyday commute on, I’d throw my money at the $3390 (plus on-road costs) Benelli. Its five-speed box makes it far more versatile around town, and the extra weight makes it feel more stable through the curves.

Despite the rocky start to our relationship, little by little I discovered that these pint-sized units aren’t just for folks that are closer to preschool age than pension age, and as a hoon-around item, they are all sorts of fun. The small size, at first a laughing matter with me on it, is what makes it so much fun. It’s not intimidating in anyway, and you find yourself pulling cheeky manoeuvres you wouldn’t pull on a more powerful rig. And life needs more cheek. 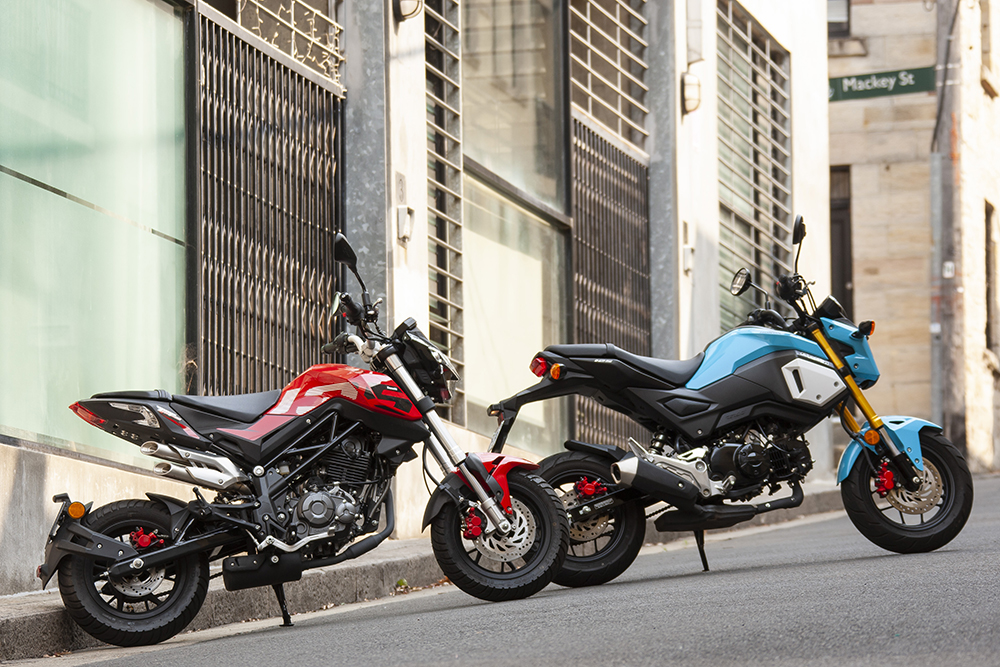