Carved from solid aluminium and with road-burning performance, Confederate’s P51 Fighter Combat is a battle-ready work of art

Confederate has become the boutique bike-building brand of choice for America’s rich and famous, with celebrities from Hollywood A-listers Tom Cruise, Brad Pitt and Nicholas Cage to rock idol Bruce Springsteen heading a high-profile roster of owners of these innovative, exquisitely crafted and ultra-costly two-wheeled works of art.

Confederate’s self-styled ‘Art of Rebellion’ has been taken a stage further with the visually stunning new P51 Fighter Combat. Powered by a 2163cc V-twin, this latest example of functional eye candy delivers serious horsepower and immense torque in a fully street-legal package. Its engine architecture has been specifically tailored for the monocoque-framed motorcycle, whose chassis, suspension and engine crankcases have all been carved from solid 6061 aluminium billet.

Having been forced from its Dixie home of New Orleans by the destructive forces of Hurricane Katrina in 2005, Confederate then had to withstand the GFC. Its survival was thanks to 63 sales of the first-generation (G1) P120 Fighter that emerged from a new Alabama base in 2009, powered by an air-cooled JIMS 45º V-twin. By any standards, the P51 Fighter represents an imaginative step forward in contemporary motorcycle design and manufacture, in no way courting convention. Company founder Matt Chambers says: “We wanted a bike that flicks the finger at the established order – low at the back, high at the front, very narrow, with a straight line expressed from the handlebar to the swingarm pivot, and made very differently, based on an ultra-stiff triangle when viewed from the side. It has the stiffest, lightest chassis capable of housing the greatest amount of torque as a percentage of weight ever achieved in all of motordom.”

This new Fighter is both technically and visually a radical update of the original, dominated by the 178mm-diameter aluminium tube comprising its spine frame, 51mm wider than the G1, with the model’s title and emblem carved into the upper face. This fuselage is made from aircraft-spec aluminium and bolted together to create a true monocoque holding an engine that’s rigidly mounted as a fully stressed frame component. Just as a conventional Honda or Harley-Davidson’s fuel tank carries the manufacturer’s title on either side, so here the Fighter’s central frame tube is emblazoned with the Confederate name etched into its flanks. That’s because it is the fuel tank, carrying 16 litres in the lower part of the frame’s spine, extending downwards under the seat.

Imagine the aluminium monocoque chassis of the legendary Isle of Man TT-winning John Player Norton race bike (reviewed recently in AMCN), only CNC-machined from solid then bolted together, rather than fabricated via a TIG-welder – that’s the P51 Fighter, albeit powered by a very different kind of twin-cylinder engine than the Norton’s relatively puny 750cc parallel-twin.

“Back in 1992 when I was working on the original Hellcat, we dreamed of obtaining a V-twin engine with a one-piece forged crankshaft,” says Chambers. “But we’ve had to make do until now with an old-style, bolted-together, five-piece Harley-type crank so that when you lean into that motor to get the kind of explosive lowdown hit of torque that Confederates are all about, the flexy nature of the crank makes it fall down hard in terms of vibration and robustness. That also meant we couldn’t tie the motor fully into the chassis to create a rigid unitary structure that handled ideally. “The S&S X-Wedge powerplant changes all that. It has a forged one-piece crank and big flywheels that allow us to deliver that substantial torque safely and smoothly, and S&S supplies us with a special Confederate version of the motor with a crankcase machined from solid billet, which has dedicated attachment points to specifically suit our frame designs.”

Wisconsin-based S&S produces the basic air-cooled ‘square’ triple-camshaft 56.25-degree V-twin air-cooled X-Wedge engine, which is then customised by Jon Kaase in Atlanta, Georgia. Kaase had never worked on a motorcycle engine before but is a cylinder head expert and award-winning tuner, especially of Ford drag-racing engines.

Kaase created a huge amount more power and torque by welding in the whole squish area and re-cutting it, changing the valve angle, reshaping the combustion chamber and gas-flowing the head. Compression was raised from 10.1 to 10.3:1 and new pistons fitted. The result was 156kW at the crank running with an open exhaust, but a silenced exhaust and all the streetlegal niceties means the production unit has 108kW at 5200 rpm and 217Nm at the rear wheel. Kaase’s head work makes the new P51 Fighter the most powerful Confederate model yet.

As the first person outside Confederate to ride the new Fighter, I’ve come to the San Gabriel Mountains north of Los Angeles. This is the first bike off the production line and has been brought to California to show the Hollywood’s glitterati and movie producers interested in featuring it on-screen. So no pressure, then, in keeping it upright riding it in anger along the switchback, swoopy Glendora Mountain Road towards the snow-capped Mount Baldy….

Straddling the P51 reveals a well-padded throne that’s improbably comfy compared to its predecessor’s über-minimalistic seat that seemed an afterthought. A day in the hotseat left me fresh enough to think this might make a neat alternative sports tourer, if you could find anywhere to stow some luggage.

With the departure of former Ducati designer Pierre Terblanche to Royal Enfield after a brief stay, Chambers has re-asserted control over design and what we have here is a radical Alabama take not so much on US-style feet-forward cruising but on European-type sportbiking. That’s down to something as mundane as the position of the footrests, now mounted slightly rearwards of the seat – a big contrast to the G1’s foot-forward cruiser stance that compromised cornering and comfort.

The P51 Fighter’s riding stance is almost ideal, in part because of a wide new handlebar, which is both dropped and pulled back further.

Because the whole motorcycle is essentially no wider than the rear tyre, it feels improbably agile – nimble, even. The reduced gyroscopic effect of the BST carbon front wheel and downsized quartet of Beringer brakes help speed up the steering, so you don’t need to give the wide handlebar such a big tug to make it switch direction. Even without being able to grip the frame between your knees, you feel at one with a bike that steers and handles brilliantly. 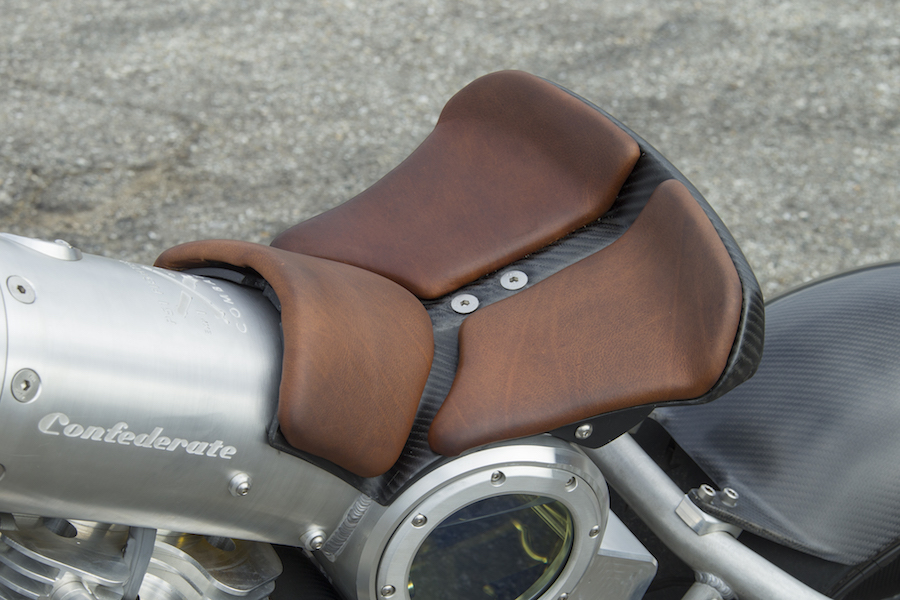 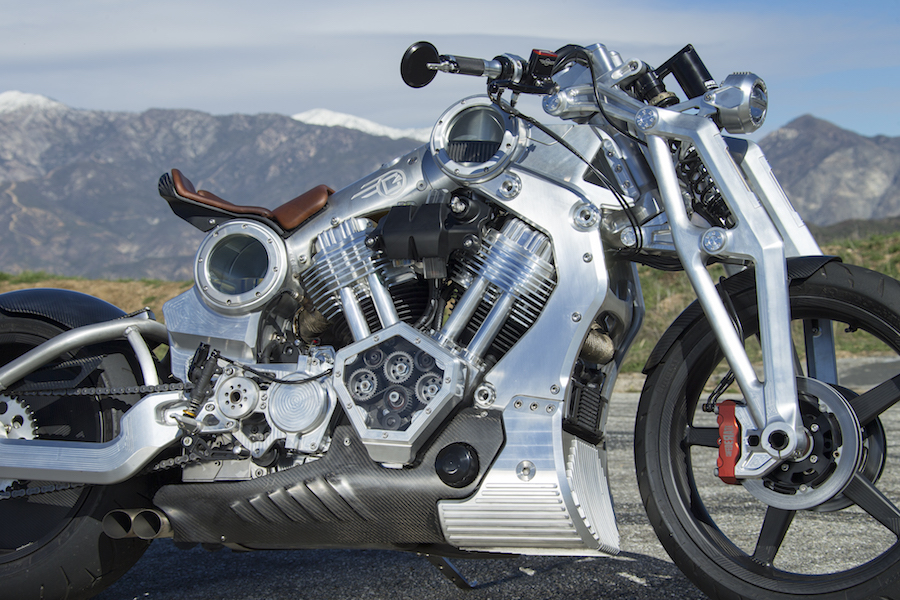 I doubt anything else on two wheels could have climbed the tortuous Glendora Mountain Road any faster, thanks to its thunderous torque and surprisingly agile handling. Surprising because it has a long 1588mm wheelbase and conservative steering geometry, with a 27.5 degrees of rake and 106mm of trail.

This delivers super-stable handling downhill into a tight bend, when the girder-type fork design – as favoured by John Britten, here machined from solid aluminium to hold down the unsprung weight and offering 4.35in wheel travel – keeps right on working as you trailbrake into the turn. RaceTech shocks front and rear give optimum damping and excellent ride quality, and I was especially impressed by way the Fighter feels so taut and sporty, and instils confidence in the way it steers. That’s despite being inflicted with a massive 240/45-ZR17 Pirelli Diablo Rosso II rear tyre, which is mounted on a slightly wider than usual 8.5-inch BST carbon rim that spreads the rubber out more and delivers a more progressive feel. Despite not having vibration-sapping engine counterbalancers, and being rigidly mounted in the frame, the X-Wedge motor is improbably smooth by air-cooled American V-twin standards. Thanks to the more refined response delivered by the Delphi EFI (instead of carbs), it pulls cleanly off idle with acres of grunt. Crack the throttle open in almost any gear and the Confederate surges forward irresistibly but controllably; engine mapping is ideal, without so fierce a throttle response that it becomes snatchy, and wheelies aren’t an issue because of the long wheelbase.

Huge torque is on tap, peaking at just 2000rpm but holding hard and strong all the way through to the 5800rpm limiter, which you have no business ever remotely approaching. Its happy zone is 1500-3500rpm and you’re best shifting up at 4000rpm, as shown on the bike’s only instrument, a large black-faced Motogadget analogue tacho (behind a steering head that’s very café racer), containing a small digital panel showing road speed and fuel level, with a red ignition light green N-for-Neutral – that’s all. Keeping the revs down lets you surf that so-strong torque curve, but you must remember that, while 3000rpm in top/fifth gear is already 160km/h, it takes very little time to get there. The surprisingly light-action clutch barely needs to be troubled accelerating out of even the tightest turn from little more than walking pace, though you’re best off keeping the revs above 1800 rpm to avoid any trace of transmission snatch.

The shift action of the five-speed Confederate gearbox is quite positive, swapping ratios smoothly except from second to first, when there’s a clunk each time you go through neutral while shifting down. However, with so much torque on tap two of those five ratios are superfluous – you can start off from rest in third gear without slipping the clutch unduly, and the P51 will go almost anywhere in top gear, with magnificent roll-on performance from any revs.

This is a great bike for close quarters traffic combat, using the engine’s meaty response to zap past cars or trucks as you carve through in a very Latin fashion. And while you expect that from a big-cube engine, the fact it’s delivered with such refinement and so little vibration is noteworthy. Confederate’s new P51 Fighter Combat is certainly the best bike produced by the Dixie manufacturer. Low, lean and very meaty, it’s engaging to ride while paradoxically more refined in feel and build quality. It’s expensive and classy, yet muscular and substantial – industrial art with a purpose, but also eye candy that functions a whole lot better than expected, especially in terms of handling.

Reflecting Confederate’s growing maturity as a company celebrating its 25th birthday, the P51 is a better-rounded, more dynamically refined package than its predecessor, while still delivering a visceral thrill when you ride it hard, as this impressive new model invites you to do.