If Royal Enfield’s intention was to create an authentic looking post-WW2 commuter with the manners of a modern ride, then it emphatically succeeded with the Classic 350

Nostalgic motorcycling is in – and while fads tend to go out of fashion, this retro fad just seems to keep on keeping on, and retro specialist Royal Enfield has been riding the wave and kicking goals. But that’s not just because its bikes come with pre-packaged retro looks, but also because they offer a combination of entry-level price, great build quality and, as models like the adventure-ready Himalayan and Café-racer styled 650s have proved, eyebrow-raising levels of fun.

This seemingly winning formula has seen customer levels in Australia balloon and there are now more than 53 dealerships in Australia with RE importer UMI expecting that to increase to upwards of 65 dealerships by the end of 2022 to back-up the increase in popularity of the UK-designed machines.

The all-new Classic 350 defiantly follows the same methodology to success. It’s fun to ride, cheap to buy and is arguably the most authentic-looking nostalgic model available – oh, and did I mention it was fun to ride? Perhaps I’m just getting older, but the look of the Classic just blows my hair back; it looks fantastic, and the finish is exceptional for the dollars. But it’s a 350, so what the hell is it for? 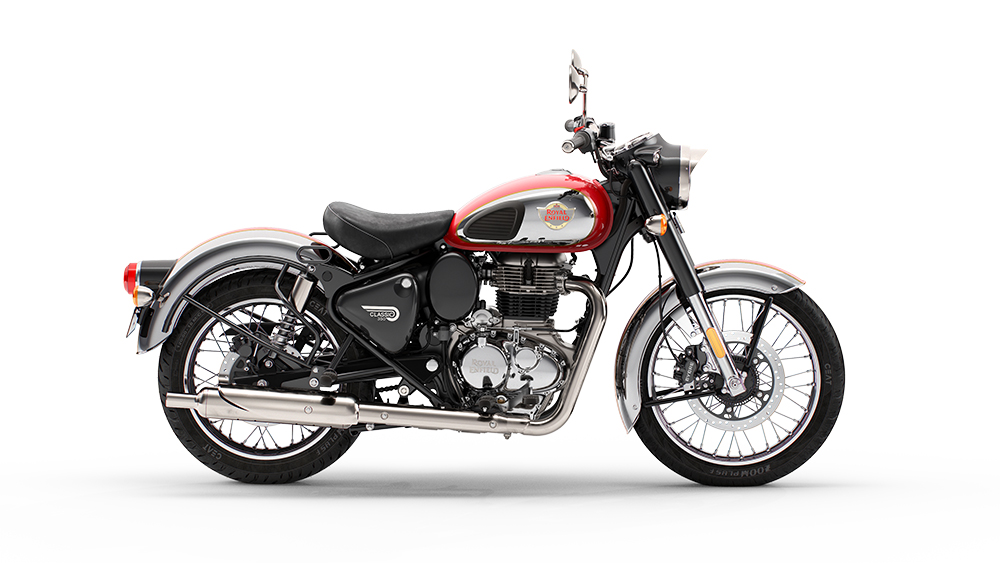 It’s a commuter and it’s marketed as such. It’s perfect for fanging from home to work, heading to the local watering hole or going for a gallop to the beach, so it was interesting that Royal Enfield chose the rural setting of Mickleham in Victoria – an area with mostly 80-100 km/h speed zones – to launch its retro city goer.

That might seem a bit odd, but it was genius really, because we took the Classic well outside where its design brief would suggest it ought to be found and it still impressed – it’s the most fun I’ve had on a bike for a while. 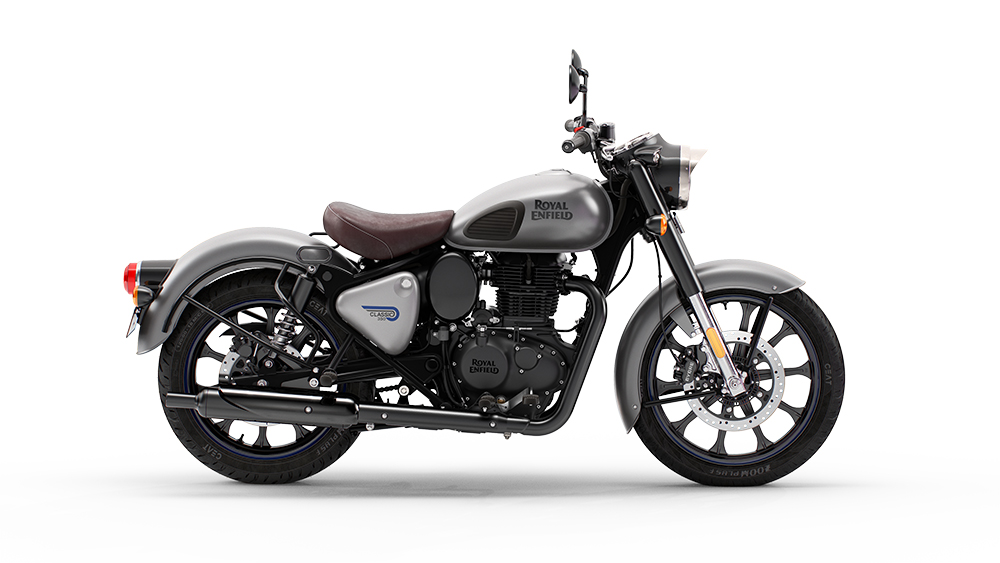 I won’t shy away from the fact that I wasn’t a big fan of Royal Enfield’s Meteor 350, not because it wasn’t a sound motorcycle, but simply because I think it’s a bit on the ugly side. The Classic, on the other hand, looks convincingly retro, harking back to post-war Royal Enfields of the 1950s.

The biggest difficulty would-be owners of the Classic 350 will have is choosing which model because it’s available in four different variants in nine different colour schemes. The entry point for the Classic is the Halcyon series, starting at $7990 (ride away), with the range-topping Chrome series coming in at $8790 ride away. 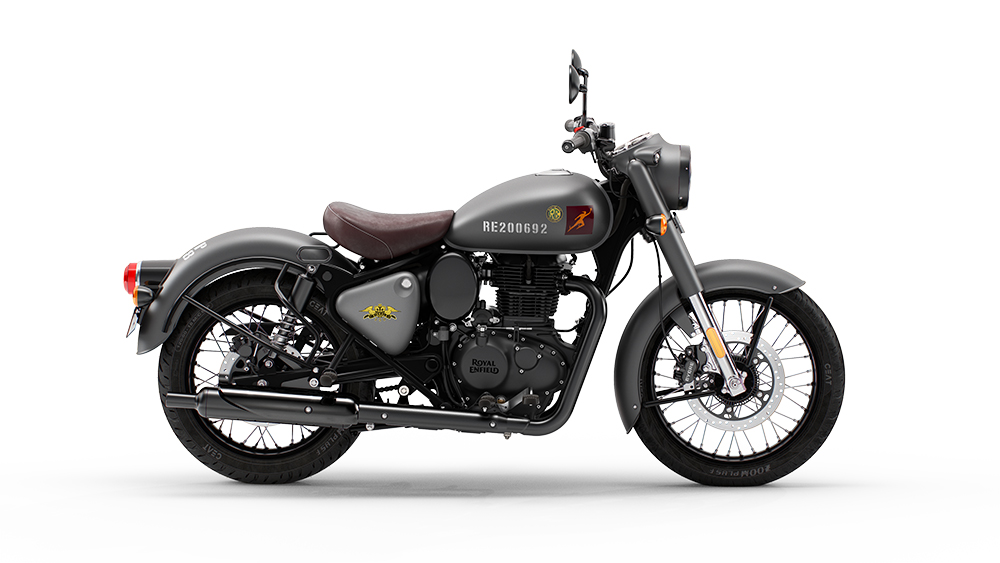 By today’s standards, a 350cc single seems pathetically small for a roadbike, but Royal Enfield has a long history with the capacity and arguably none more legendary than the post-war G2 Bullet 350.

First introduced in the Meteor 350 in 2020, the J-platform air-cooled 349cc single wouldn’t pull the skin off a rice pudding, as they say, but it’s adequate for the style and intended purpose of the Classic. It’s a lazy, slow-revving donk and that should equate to many years of trouble-free riding and RE seems confident in that by offering a three-year warranty and three years of roadside assist with it. There’s a meagre 15kW, or 20.2hp, at 6100rpm on tap and 27Nm of torque at 4000rpm, and the fuel-injected single is responsible for pushing 195kg of claimed wet weight around. 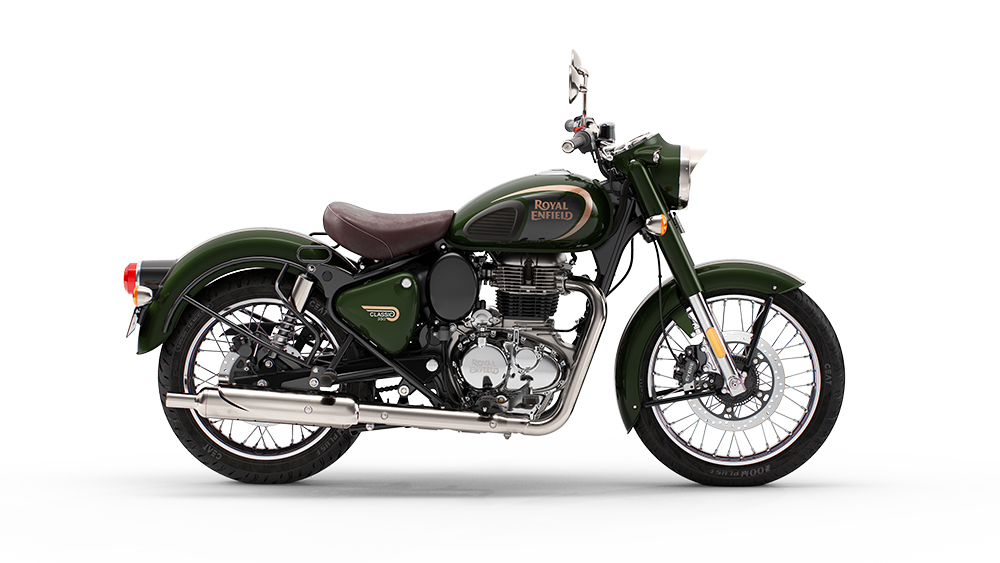 To put that into perspective, the water-cooled 373cc single powering Husqvarna’s retro-styled Vitpilen 400 puts out 32kW and 37Nm of torque and weighs just over 160kg (claimed) ready to roll.

But what the Classic lacks in horsepower it more than makes up for with the vintage look of the engine. Like the rest of the bike, it’s beautifully finished – especially for its $7990 starting price. There was some debate within RE as to whether they should fit a kickstart or not. I say yes, it would have added to the look, and I probably would have used it from time to time just for the nostalgia trip, but RE chose not to include a kickstarter into the new design for reasons of cost and weight. 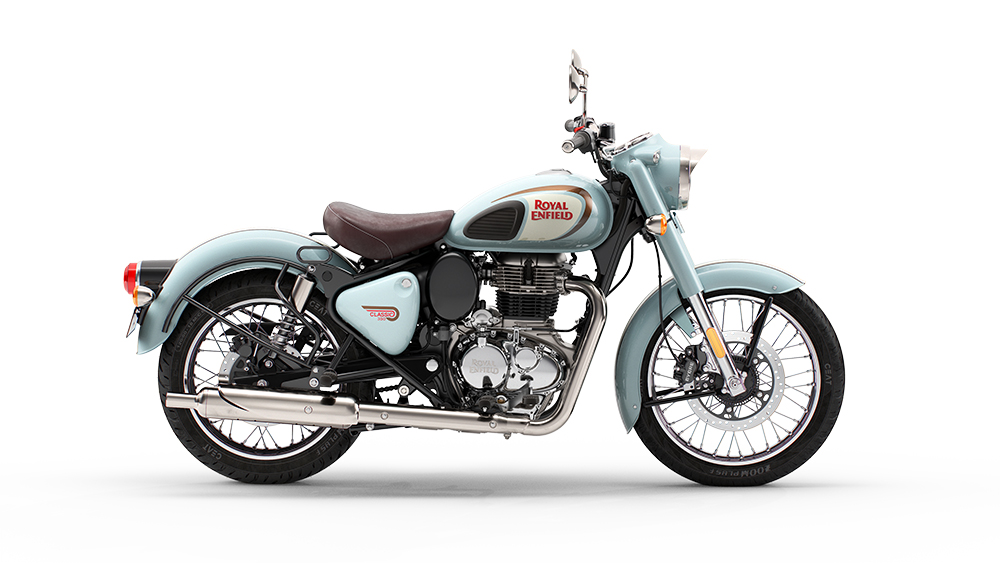 Sure, it could use a bit more oomph, especially out on the highway, but for the job it’s designed to do it’s enough. Just. What it does mean is that you’ll need to zip through the five-speed gearbox with regularity to keep the Classic on the boil when the needle goes past the 80km/h mark and there are hills around. On the flat stuff, or at lower speeds, the two-valve single is very content to chug along without fuss – it’s not noisy nor overly vibey thanks to the counter-balanced engine – it’s a sweet and durable feeling engine that has the power to sling you along at around 100km/h comfortably, but any more than that and it’s revving harder than you’d like. 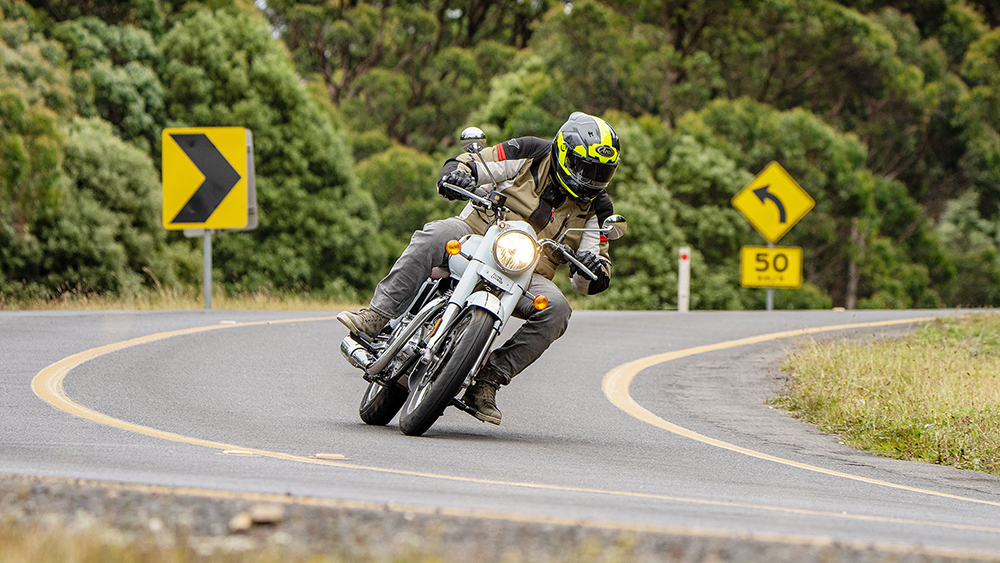 Slow bikes are tops – yes there’ll be whingers because it’s not very powerful, but there are benefits. Firstly, and obviously, it slows you down and gives you more time to relax and take in the scenery, and that’s what the Classic is all about for me – thumping along with no concerns just taking in the no-frills ride and the surrounding world. The other advantage is that you need to fall back on your skill levels if you want to zip through the twisties, you can’t rely on massive power to compensate for poor-cornering technique. 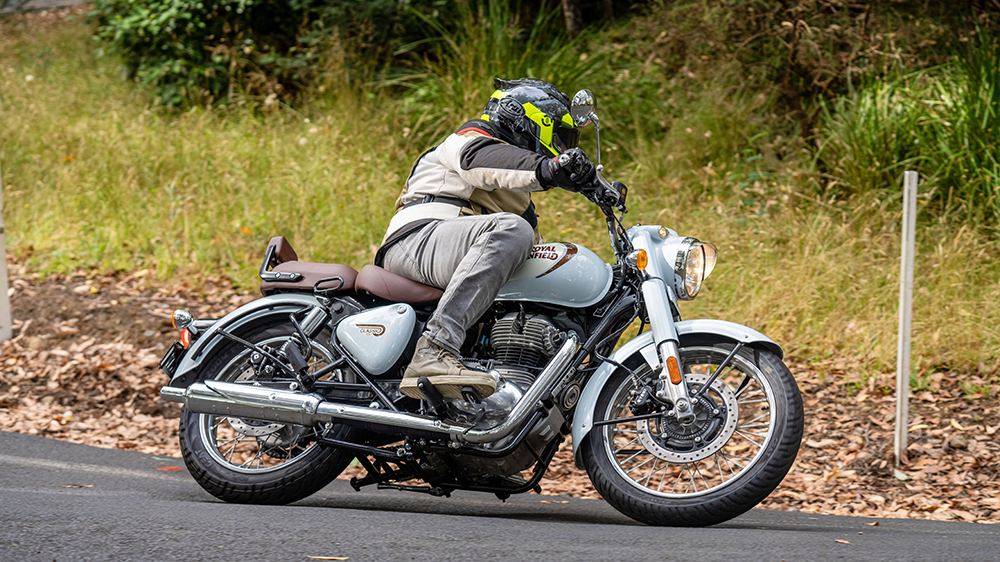 The Classic may share the Meteor’s 349cc single cylinder engine but the twin-downtube frame is all-new and has been designed to offer more rigidity and a sportier ride. A conventional 41mm non-adjustable fork with 130mm travel keeps the front-end tracking straight, and six-way preload adjustable twin shock absorbers on the rear keep the bumps at bay. 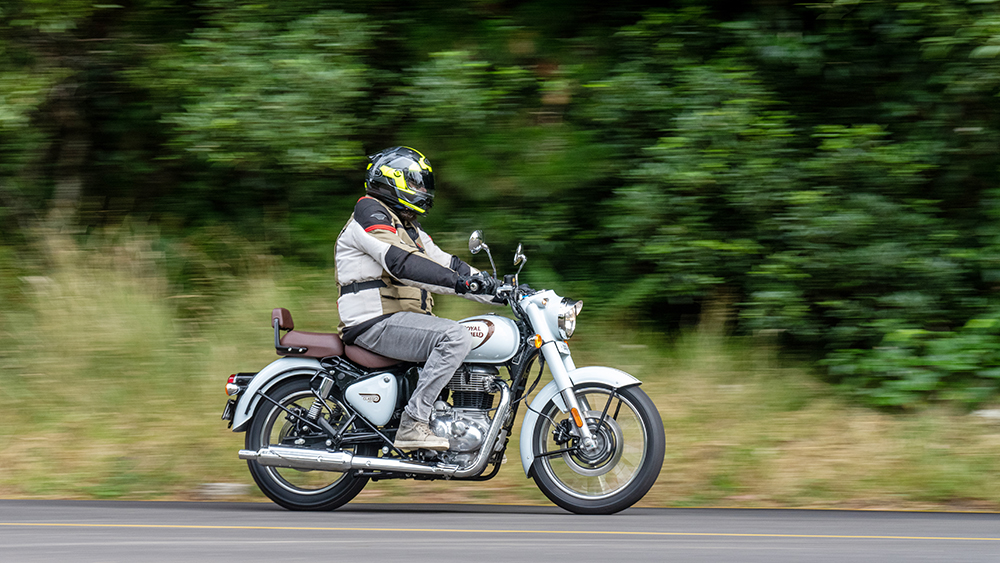 The suspension is perfectly suited for fanging around town – it’s plush and compliant, and it’s surprisingly good out on the open road, too. You can wrangle the Classic through the bends with relative ease, and it’s quite a decent steerer for the style of bike. The front and rear suspension is matched perfectly, and it doesn’t suffer from ‘shit shock’ syndrome like so many other entry-level bikes. It’s not perfect and the rear can deflect off bigger hits at faster speeds, especially when it’s on the edge of the tyre, but you must remember what you’re on and ride accordingly. 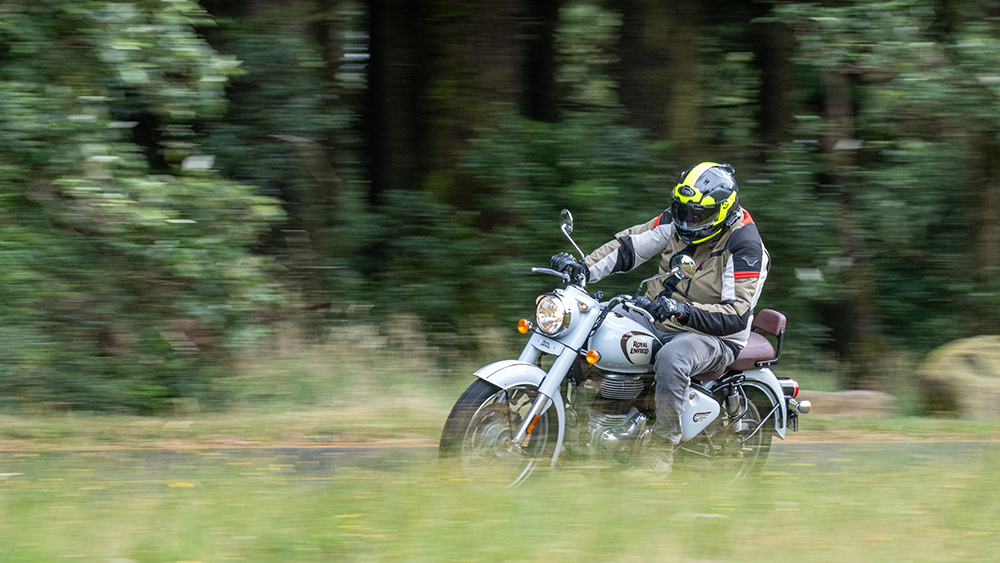 But again, this is one of the things I really enjoyed about the Classic. Without sounding like a total wank, there’s something pure and back to basics about it that I really like; it’s not perfect, but there are no hidden nasties. There are shortcoming rather than faults and shortcomings can be ridden around and provide a challenge.

The main barriers when it comes to cornering are ground clearance – the ’peg scrapes on left handers and both the ’peg and exhaust scrape on rights – and the OEM CEAT tyres. The 100/90-19 front and 120/80-18 tyres work perfectly around town but if you’re riding with gusto, be cautious, be aware and be prepared to put decent rubber on the Classic. I suffered a number of front-end slides while cutting laps through the mountains although, I must say, they were predictable enough that I didn’t throw the Classic into the bushes. 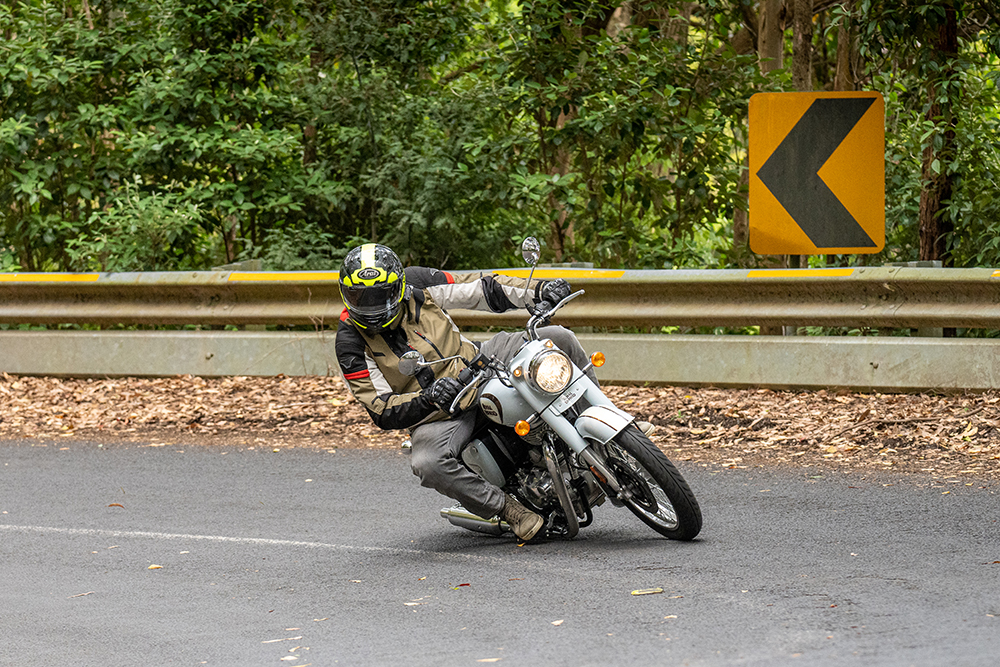 I have very few gripes with the Classic, but the front brake was one of them. It has a twin-piston caliper with 300mm disc package, while on the rear you’ll find a 270mm disc gripped by a single-piston caliper, with dual-channel ABS. The first test unit I sampled had a terrible front brake – it was spongy, offered bugger-all bite and generally just didn’t haul the bike up very well at all. The next bike was better, the next better again and the next somewhere in between. You could put this down to setup up and/or pad material, but even so, with 195kg plus rider to pull up you want good brakes and even the best front brake of the assembled bikes felt lacklustre. 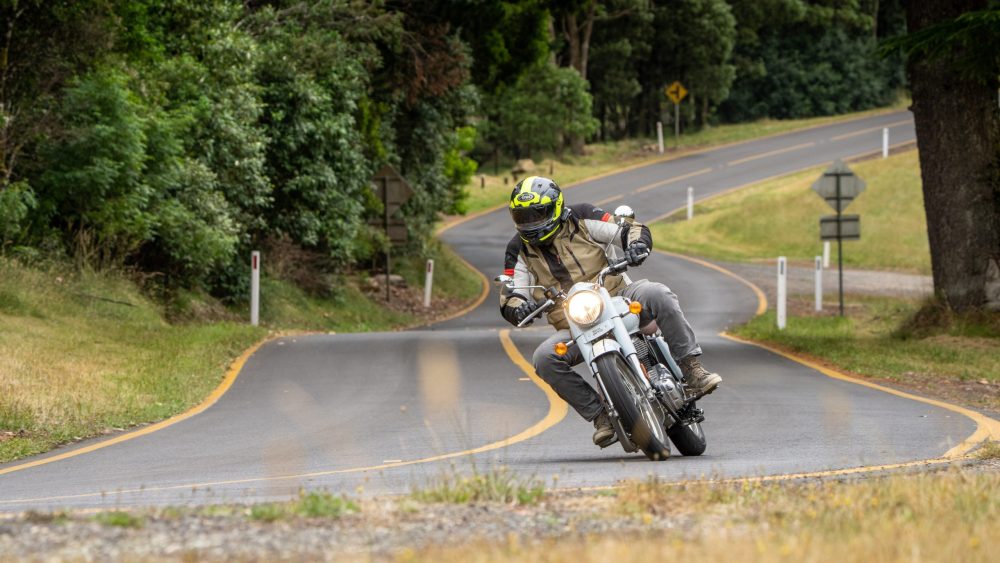 The rear on the other hand is excellent and does everything right. The non-switchable ABS worked well for the most part, but one heavy application did lock the rear wheel for a good few metres, letting out a pleasing skid sound. The brakes are adequate for this style of bike if you’re commuting around town, but the Classic is capable of a weekend tree change and it should have the brakes to match. 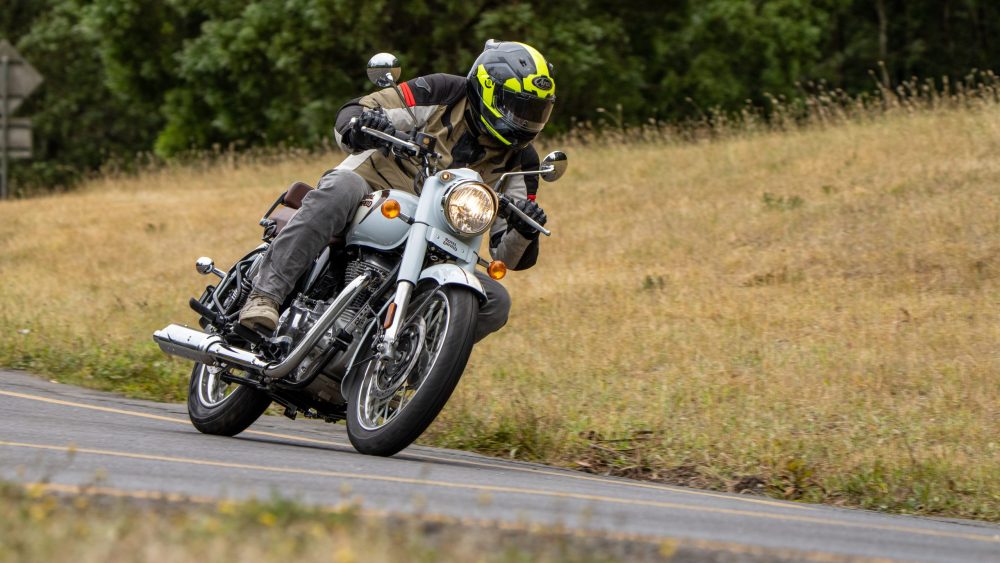 The classically styled fuel tank holds 13 litres of fuel and slopes back gently to the plush, well-shaped seat. At 805mm even the shortest of arses shouldn’t have a problem with getting a foot on the ground and comfort is on the awesome side of comfortable.

Footpeg position takes some getting used to; they are just waiting to take out your shins when you paddle walk the bike around and are just the right position to snag your foot if you’re coming off a sportsbike or cruiser. You get used to it, though, and it’s that position that makes the ergonomics so comfortable. There’s an ever so slight lean to the wide ’bars and it’s enough to keep weight off your tailbone without loading your wrists. 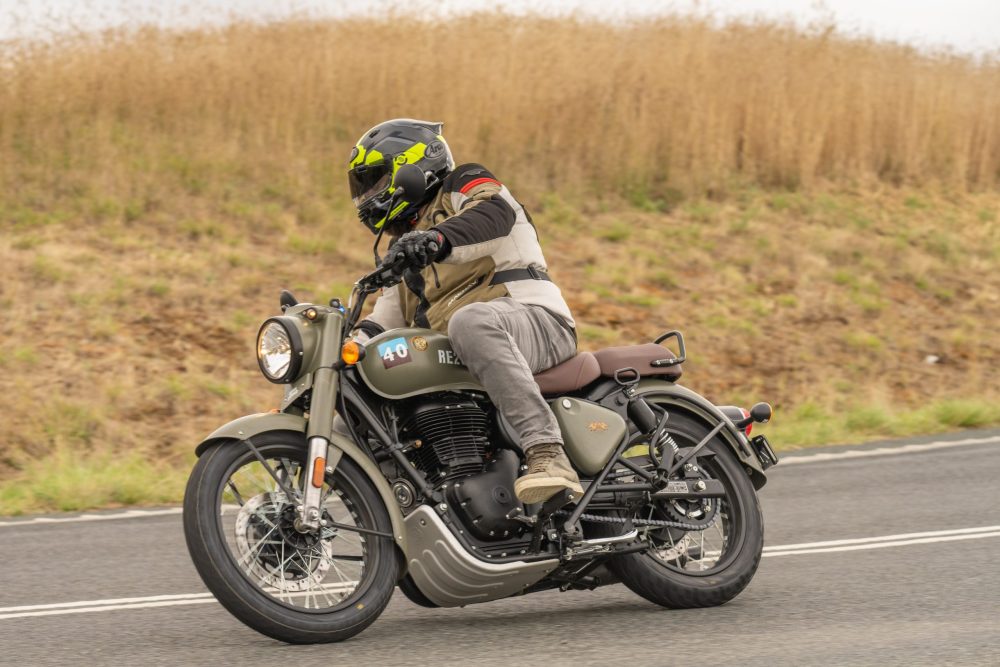 The cockpit is as lovely as it is simplistic. There’s a large analogue speedo that takes centrestage with a small LCD display just below giving basic info such as odometer reading, trip meters and fuel level. Below that, the ignition is on the left alongside a decorative RE badge on the right which hides a void for the firm’s optional Tripper navigation unit. And there’s even a neat little USB port tucked away at the back of the left-hand switchblock. 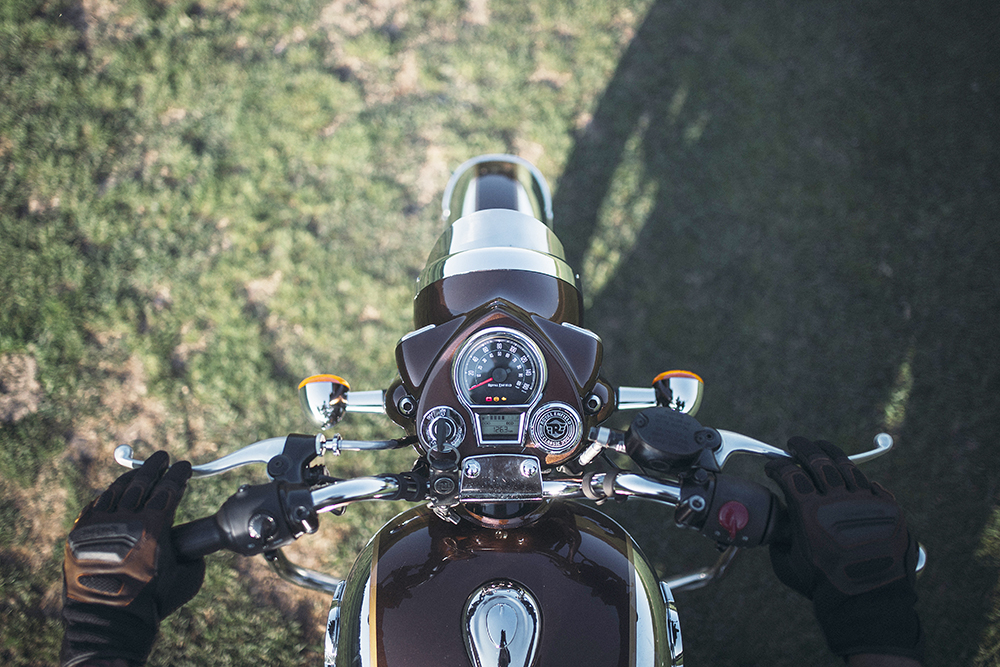 The group did encounter a few electrical gremlins with several bikes showing an oil light that came on and stayed on until the bike was switched off and back on. In the Classic’s defence, the oil light issue only appeared on three bikes and those three were ridden with much enthusiasm, if you get my drift. There were also a couple of machines whose speedos stopped working but, like the oil light, a flick of the ignition brought it back to life. 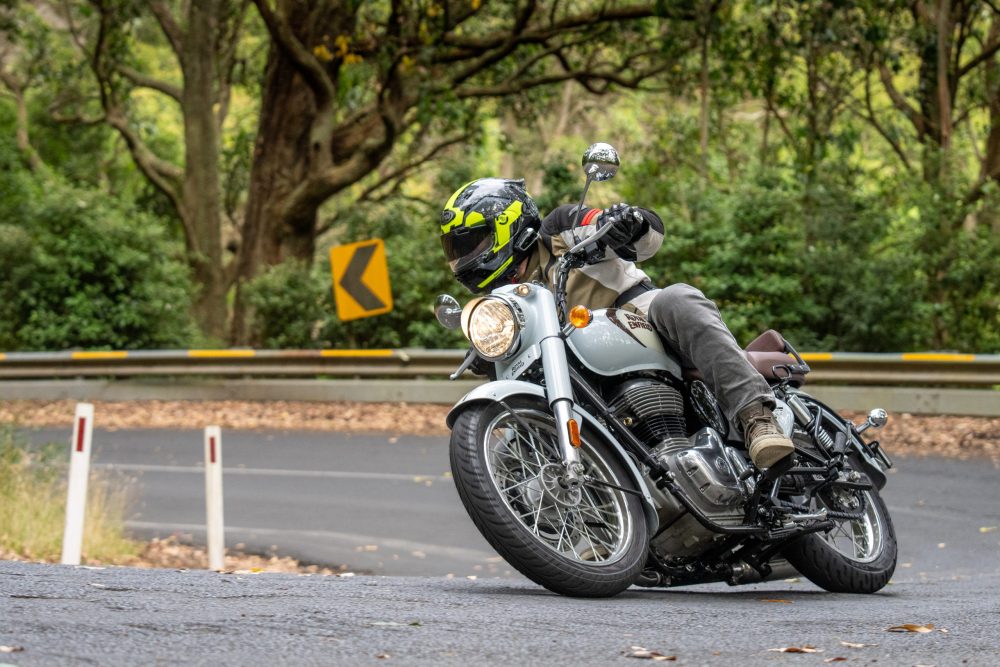 I enjoyed the Classic way more than I ever thought I would and in a bunch of different ways. It’s a great commuter, can hit the open road if you keep the speed down and it goes around a corner okay. More impressive than all those things, though, are the look, fit and finish. Apart from the disc brakes, from afar you could be looking at a beautifully restored bike from the 1950s, and the level of finish is amazing considering its sub-$9000 price point 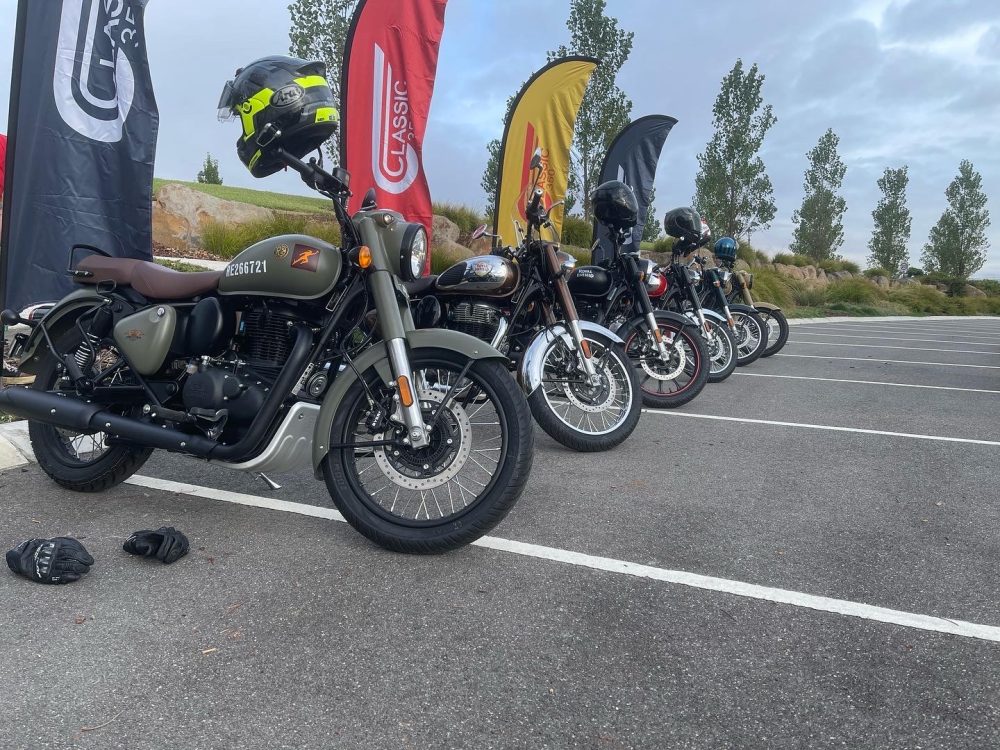 Apart from Triumph’s far more expensive T100 and T120 Bonneville, I don’t reckon anyone does a retro as authentic or beautifully finished as the Classic. The fact that it’s also a cost-effective, fun little bike to ride should encourage anyone looking to get their old times ride on to get out for a test ride on one because the Classic 350 is a real gas. 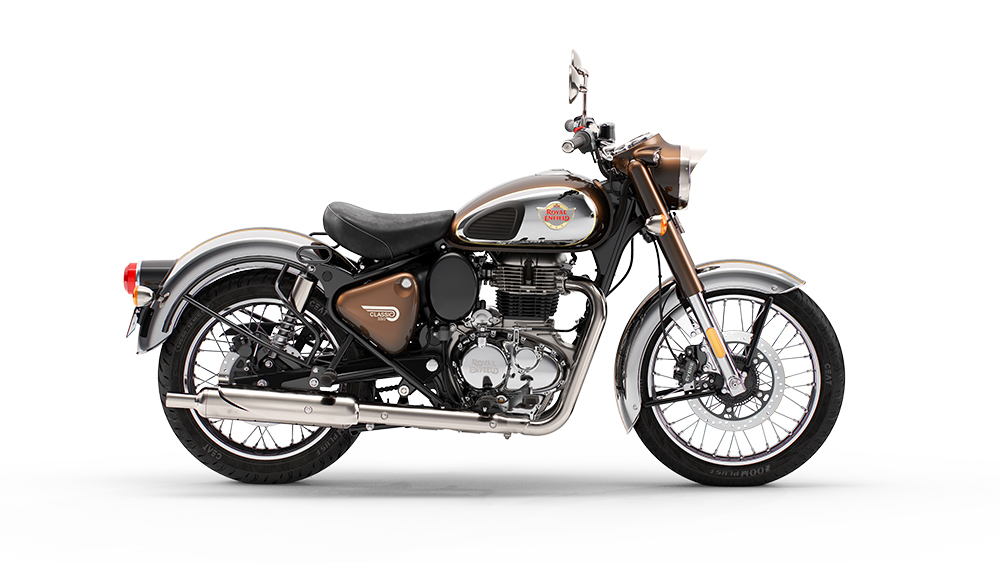