Let’s start with the big Bonnie. Triumph says the 2021 T120 is the best-handling Bonneville ever, and I can see why. Cutting unsprung weight delivers a huge benefit as it allows the bike to steer quicker. You feel this at speed because the new Bonnie turns with more fluidity. So much so, in fact, that on a blast along backroad sweepers the T120 feels nimbler and easier to throw from side to than its T100 sibling, which on paper is lighter. 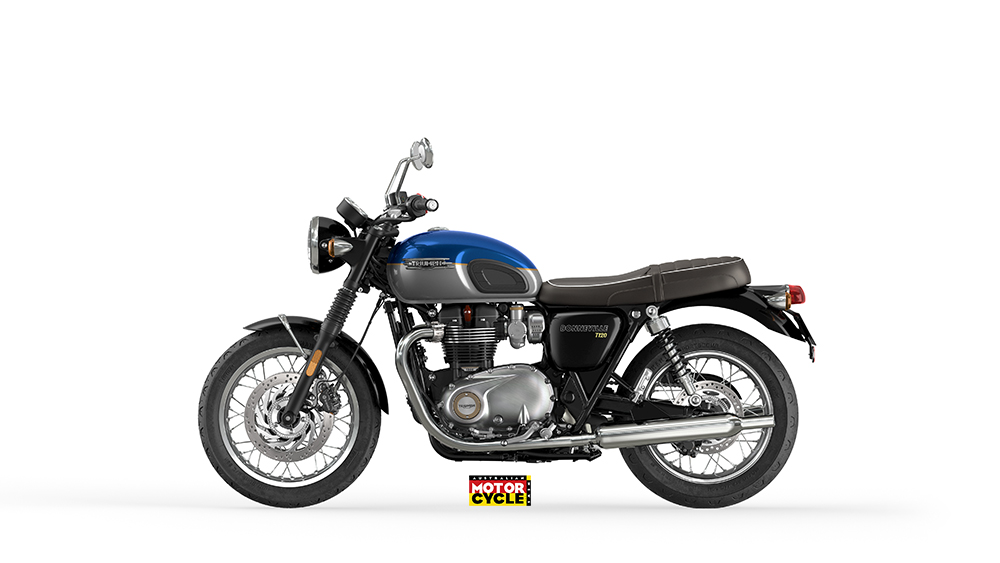 For all its agility at pace, the overall weight of the bike is more apparent at slow speeds and when you’re moving it around in your garage. There is no hiding its weight and it’s top-heavy compared to its retro competition… and the T100.

Yes, it handles. But don’t get too carried away, because the bigger Bonnie will soon start to drag its ’pegs, and if you lean too much there is a danger of touching down those lovely chrome exhausts. The grip and feel from the Pirelli Phantom rubber is there, but the ground clearance isn’t. 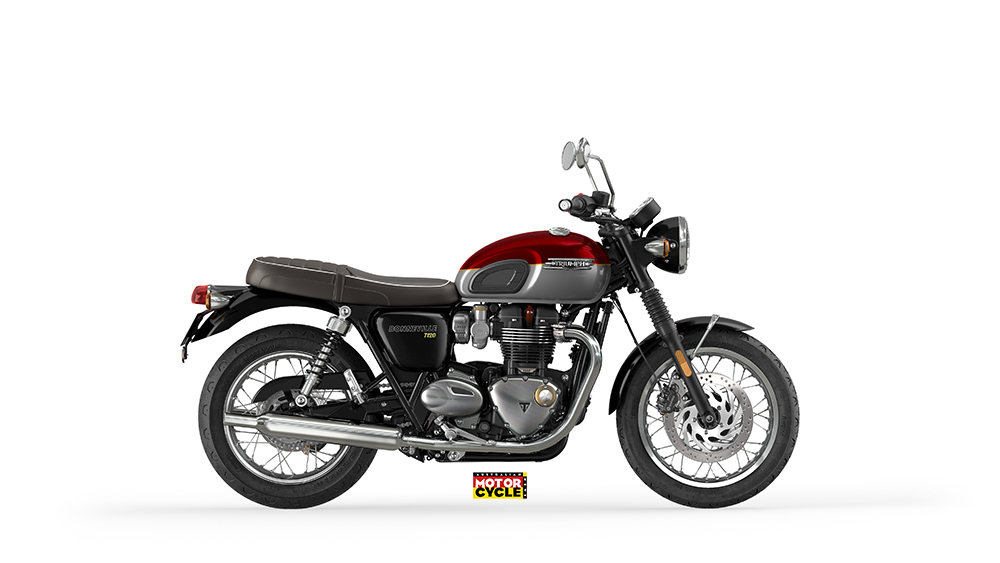 New sliding-caliper Brembo stoppers, along with that weight reduction, have improved the braking performance of the T120. Conventional (non-lean sensitive) ABS comes as standard and there is still a Nissin caliper at the rear. The front brakes are easy to use and have nice feel, while both brake and clutch lever are span adjustable. Nevertheless, 236kg is a fair amount of weight, and this isn’t a slow bike. Once or twice, while braking heavily off the freeway, I had to use four fingers instead of a casual one or two. 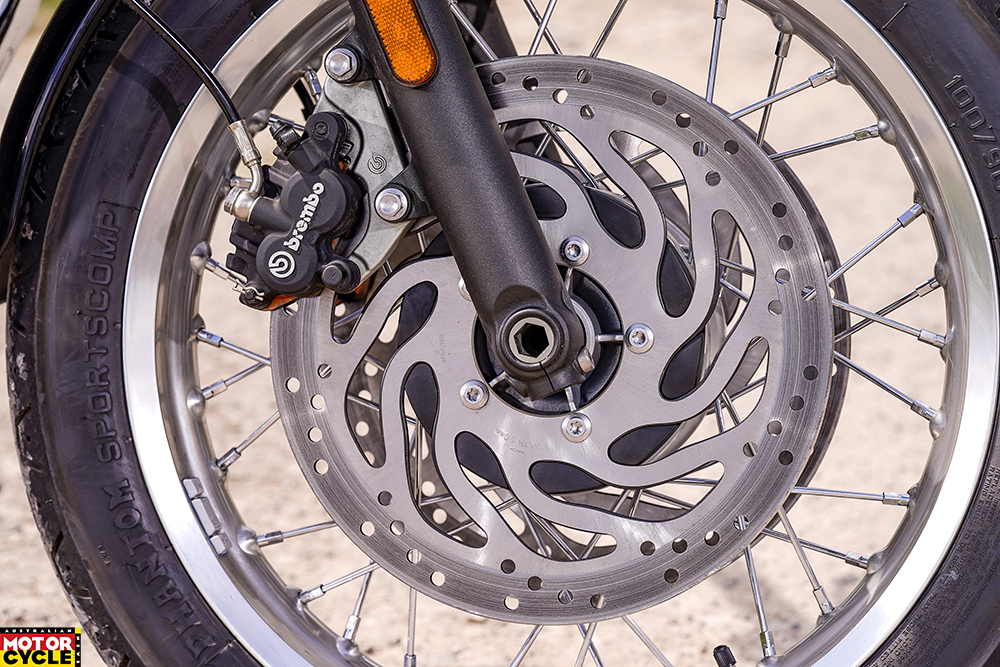 On-paper performance figures only tell half the story, as the responsiveness of the big parallel twin has been sharpened. Don’t be fooled by the retro styling and heritage looks; this 1200cc British twin can pack a punch. There is serious grunt available from even low down in the rev range, while the free-spinning engine adds real urgency – in fact, I was taken by surprise on more than one occasion. 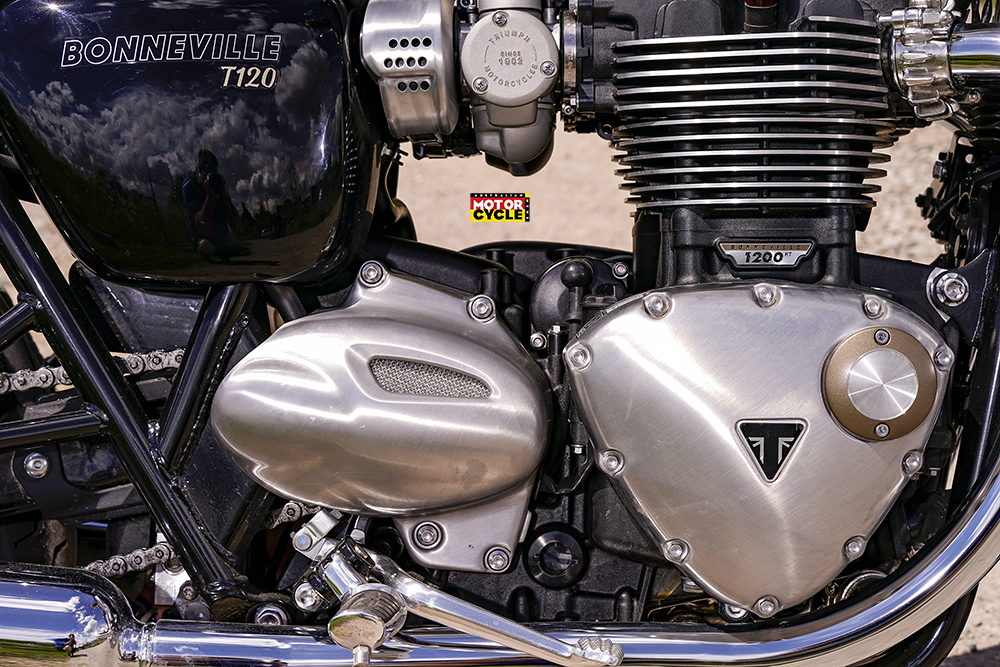 This wide spread of power and torque make the 1200cc T120 fun to ride, more so than it’s retro styling suggests; 160km/h is easily achievable, 180km/h isn’t a problem, and even 200km/h if you’re tucked in and lying prone into the face of the ornate clocks. Switch off the traction control and it will enthusiastically lift the front in the first few gears. Obviously, I know this is not how a T120 should be ridden, but like driving a powerful classic V8 car that you’d rarely thrash, it’s nice to know it can still kick arse should you wish it to. 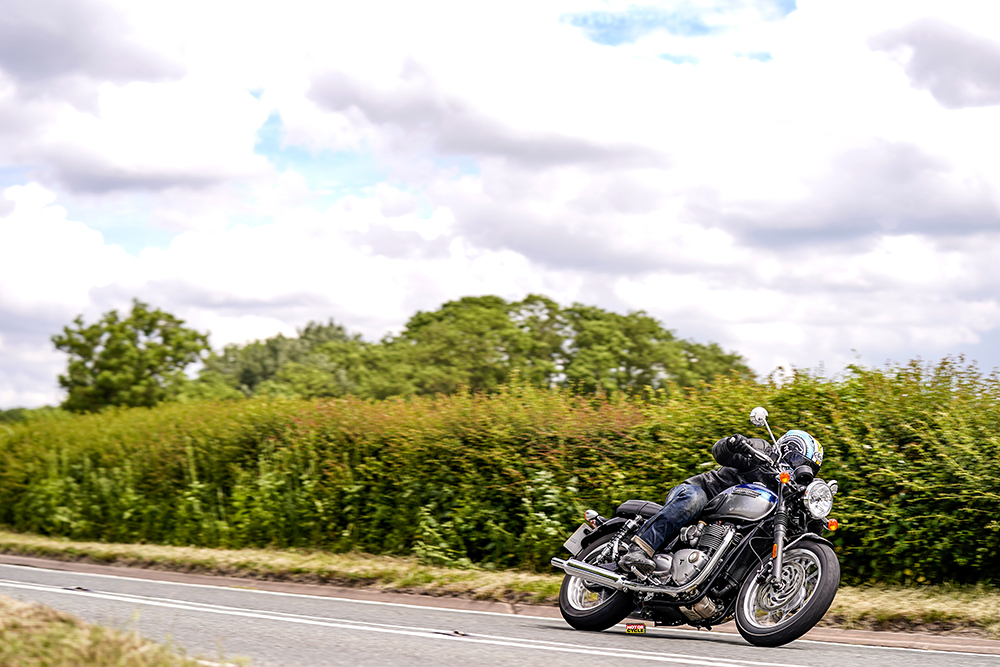 In the real world, torque comes in handy for overtakes and dismisses the added burden of a pillion with ease. As I’d ridden the T100 the same week, I forgot the bigger Bonnie gets six gears, one more than the T100’s five-speed gearbox. Once I’d finally found sixth it was well worth it because, at 120km/h, the analogue tacho hovers around 3000rpm, the engine barely working as the bike cruises effortlessly. 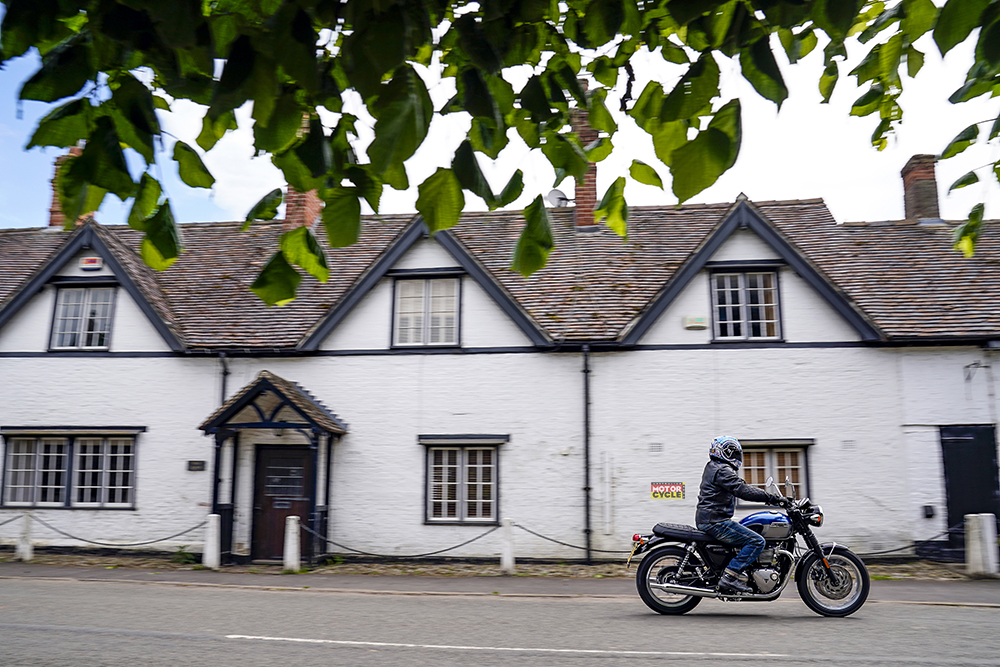 As much as I applaud the new Euro-5 engine, the fuelling and throttle response are a little snatchy, which may be down to the new lighter engine internals. Switching into Rain mode (doable on the move) delivers softer fuelling and is especially useful around town. I’d also like a little bit more noise from the sculpted twin exhausts, which do a great job of hiding the new cat-converter, but lack a little character. 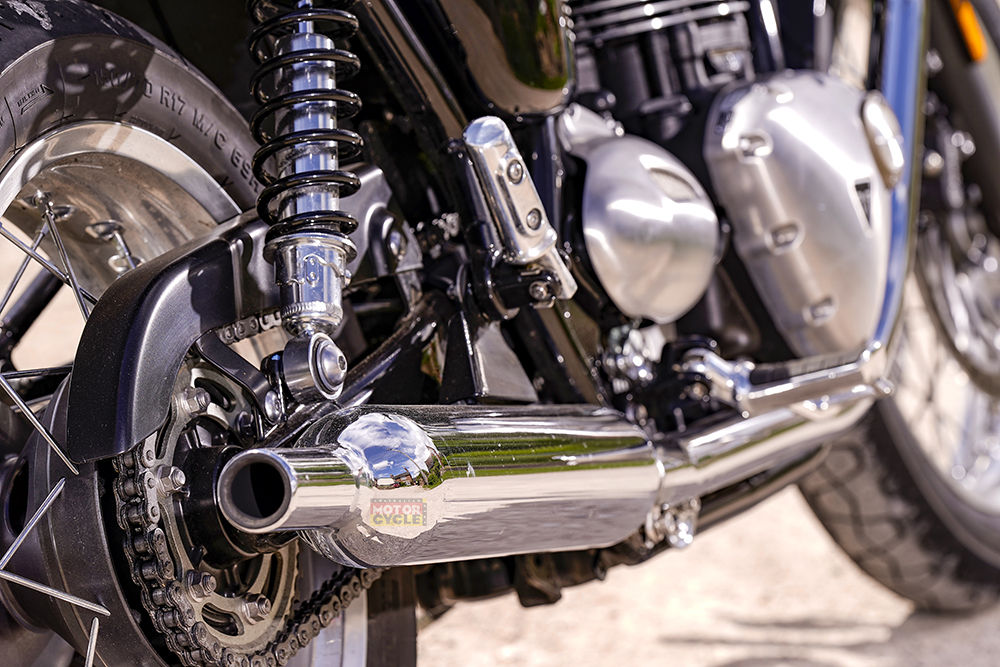 Cruise control is standard and is amazingly easy to use – simply press one button and your speed is set. You can’t accelerate or deaccelerate once the cruise control is activated, which is a little frustrating, but arguably most owners will like the simplicity. I found it a bonus on long journeys or when sticking to a speed between average-speed cameras. 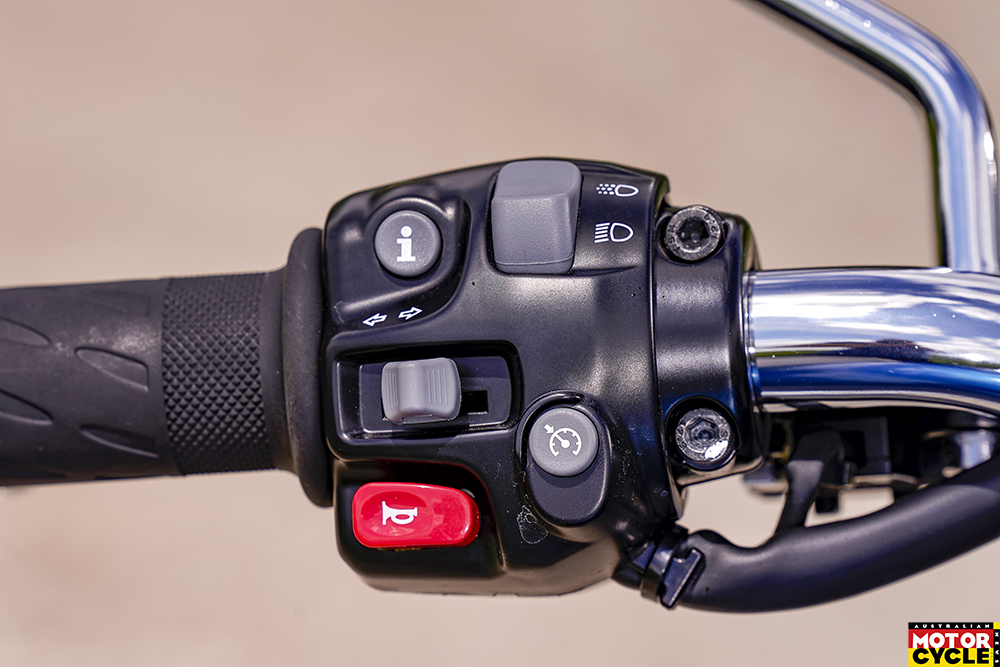 Two riding modes, Rain and Road, come as standard, which is not a feature on the T100. The modes don’t change the power but do change the amount of TC and ABS intervention. TC can also be deactivated, but not the ABS. There is no IMU on the T120, which means the rider aids are not lean sensitive. The switchgear is straightforward, and the clear ornate clocks give adequate information with a small digital readout. There is also a USB charging point under the seat. 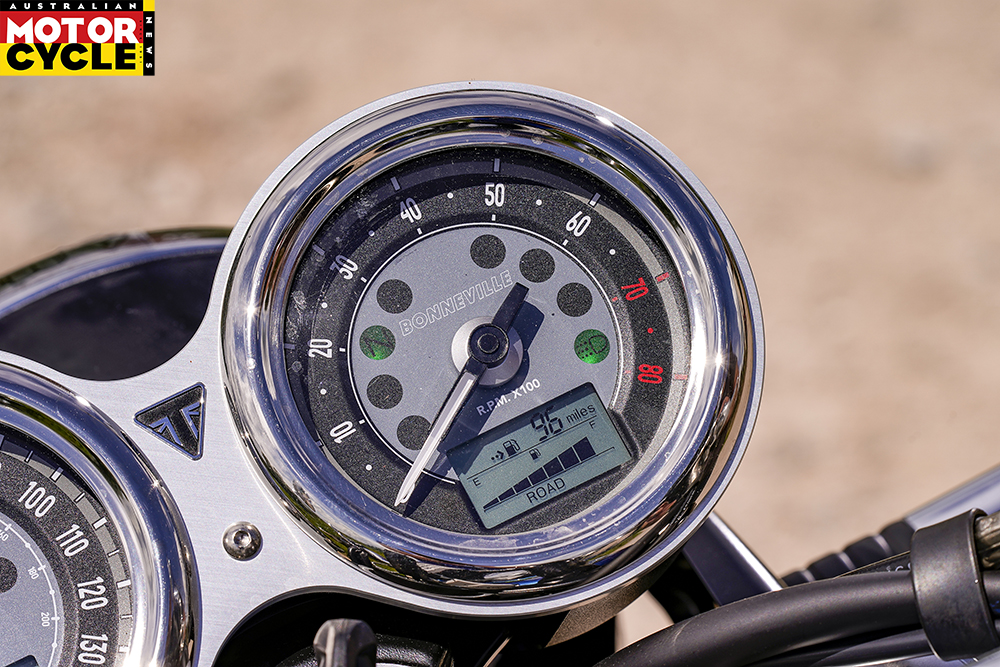 It seems as though the Triumph engineers have tweaked the existing bike by giving it a gentle prod rather than a complete makeover. The engine feels more lively but, for me, the lighter handling at speed and improved brakes – along with the now standard cruise control – are the greatest advantages of the new model. 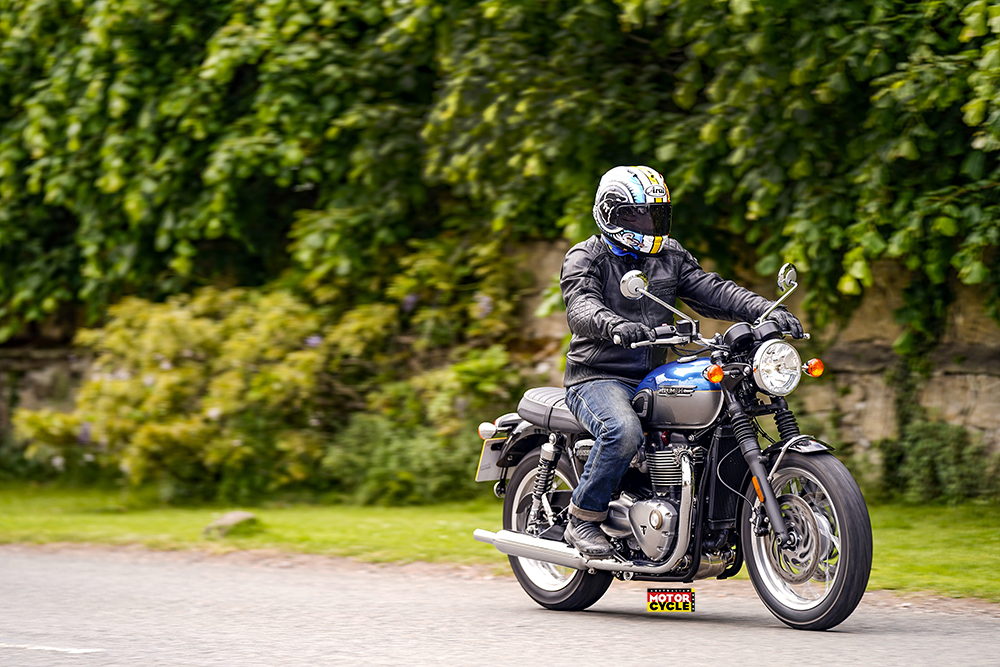 Arguably a little down on power compared to some of the competition, some may not like the lack of tech, but personally I don’t think it’s an issue, and it gets a thumbs-up from me.

We’ve only touched on the looks and nostalgia it provokes; I don’t think it can be matched in this class. Triumph’s new T120 Bonneville is an excellent jacket-and-jeans bike that keeps life blissfully simple – just ride it and have fun. 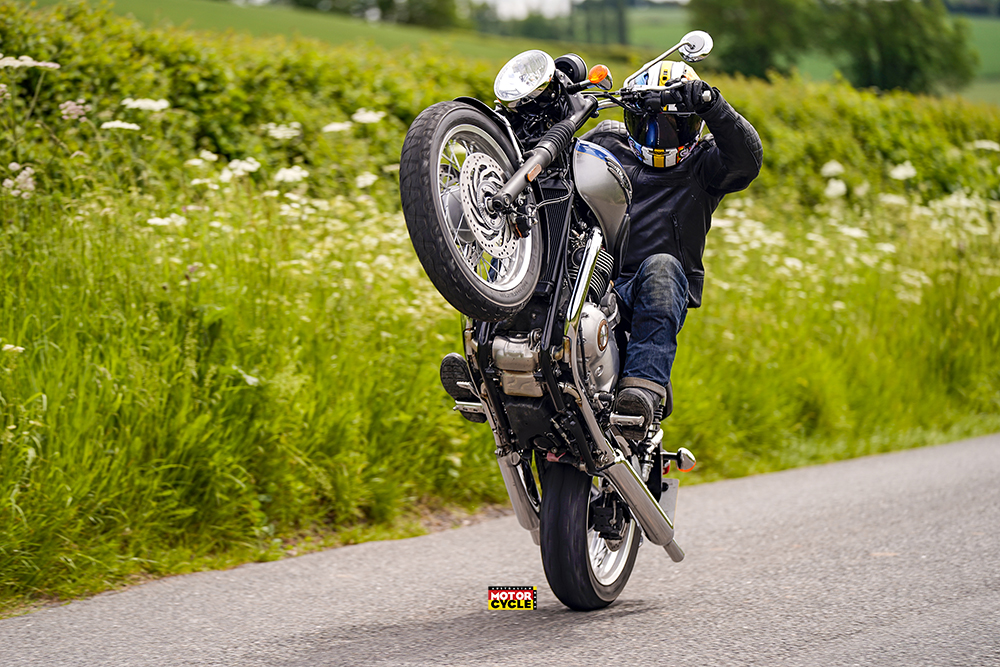 Like the T120, Triumph’s iconic Bonneville T100 receives a significant shake-up for 2021. In many ways, Triumph has given the ‘entry level’ Bonnie more appeal than ever, bringing it closer to the T120, although it retains a smaller 900cc parallel twin and is priced at a more modest $17,800 on the road. 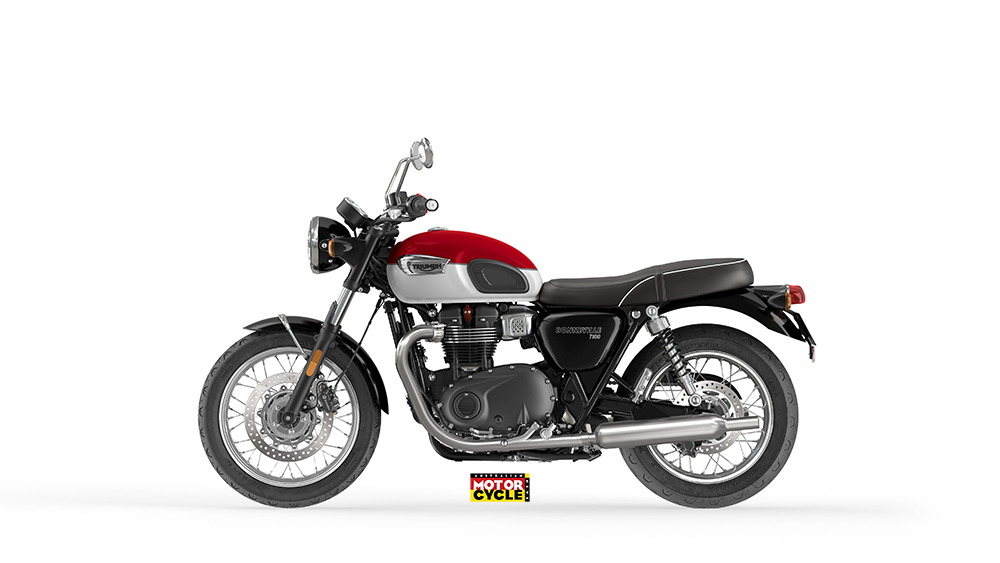 For 2021, the T100 also conforms to Euro-5 standards, while power has increased by almost 20 percent over the old bike, weight is down 4kg, and the suspension and brakes have been updated.

I love all the retro detailing around the T100: the hidden cat-converter and the original looking pipes, the twist-turn fuel cap, the original looking ‘carbs’, the embossed Triumph logo on the handlebar, and the brace across the front mudguard. This is a 2021 ‘entry level’ Bonneville, with modern fuel injection and rider aids, but at a glance it could easily be mistaken for an original. 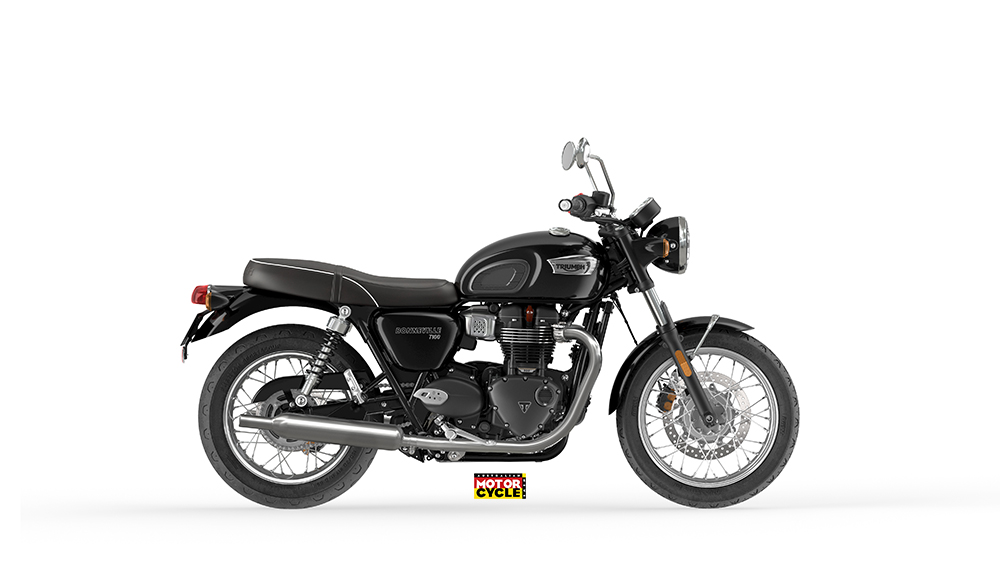 Power is up a substantial 18 percent leap compared to the previous T100. To achieve this it appears Triumph has merely added the engine from the Street Twin, which was introduced in 2019, rather than re-inventing the wheel, and the good news is that the boost in engine performance is instantly noticeable. Outright power isn’t a major concern in this class of entry-level retro machines, but it is certainly welcome. That extra kick gives the T100 more zip and makes the ride livelier. It also makes the new Bonnie more entertaining in the sense that you no longer feel like you are riding an entry-level bike. Quite frankly, the old Bonnie T100 felt a little short-changed when it came to performance. 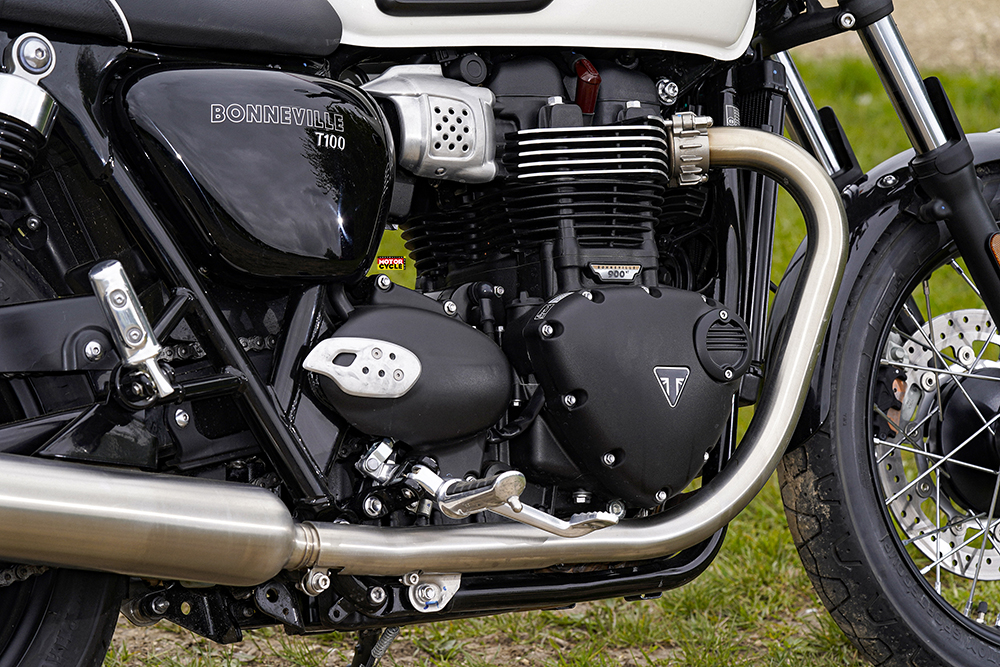 With quoted peak torque unchanged but slightly higher in the rev range, you do have to rev the T100 a fraction harder to make the most of its new oomph. But, the new engine out-grunts the old from 3500rpm, with 80 percent of its torque available from as little as 2000rpm. It will still happily pull from the bottom of the rev range without troubling the five-speed gearbox but now, if you should rev it harder, 160km/h is easily achievable… and even 180km/h-plus when tucked in. 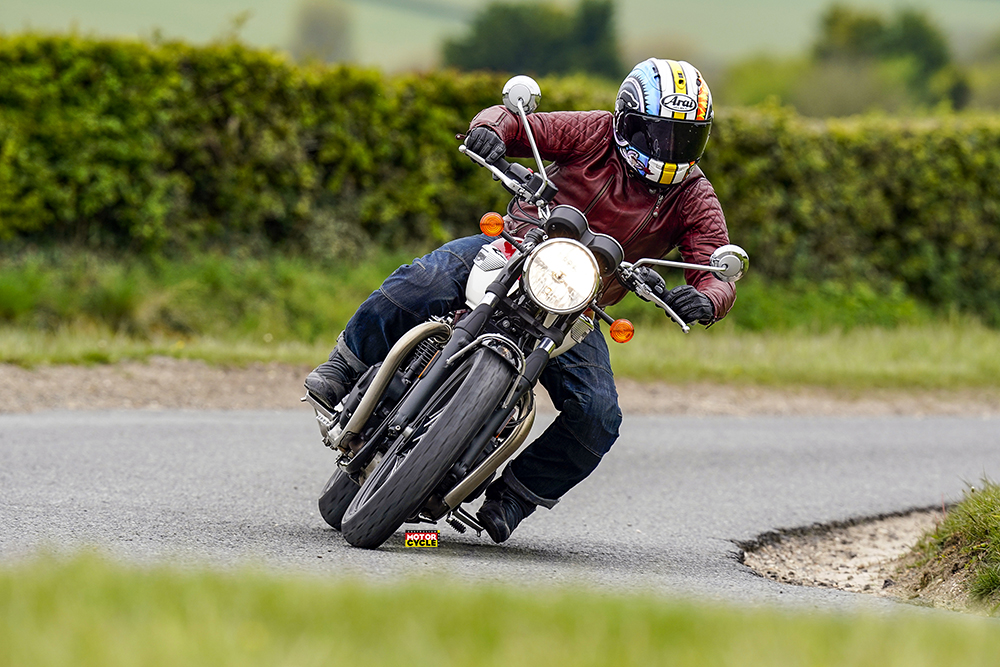 That extra power comes in handy for quick overtakes, and it’s priceless when you add a pillion, which the T100 now accommodates with comfort.

Four kilograms have been shaved off the T100, and most of that saving has come via the new engine. The new Euro-5 exhaust has added some weight, but Triumph needs to be congratulated for hiding the ugly catalytic converter under the bike. Despite the engineering challenges, the exhaust has a lovely flowing appearance, but it’s a shame the sound output is a little soulless. 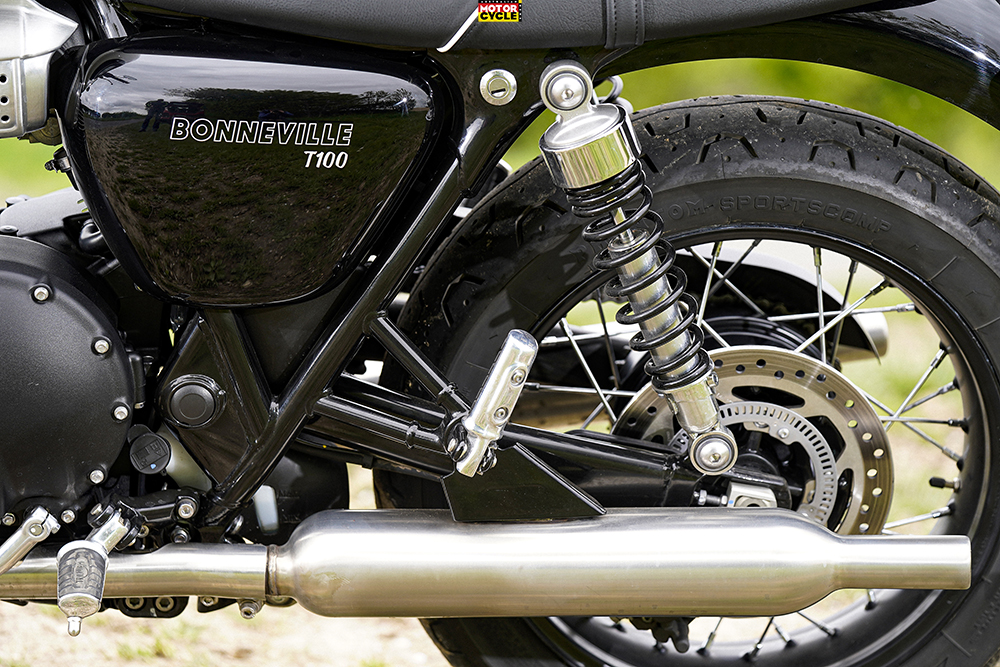 Triumph has revised the suspension settings and added a new higher-spec fork for 2021. There is a nice balance to the T100 which, combined with lovely smooth fuelling, makes it a doddle at low speeds, if a little heavy compared to some of the competition.

Stability is excellent, and comfortable ergonomics make it a breeze to ride at a relatively brisk pace. The fork and twin shocks lack any damping adjustment, and there’s only preload adjustment on the rear, but the T100 works well straight out of the box. Like the T120, the footpegs meet the road to give you an indication of cornering limitations, and with a pillion or heavier rider on board some may want to add a little preload on the rear to reduce scraping. 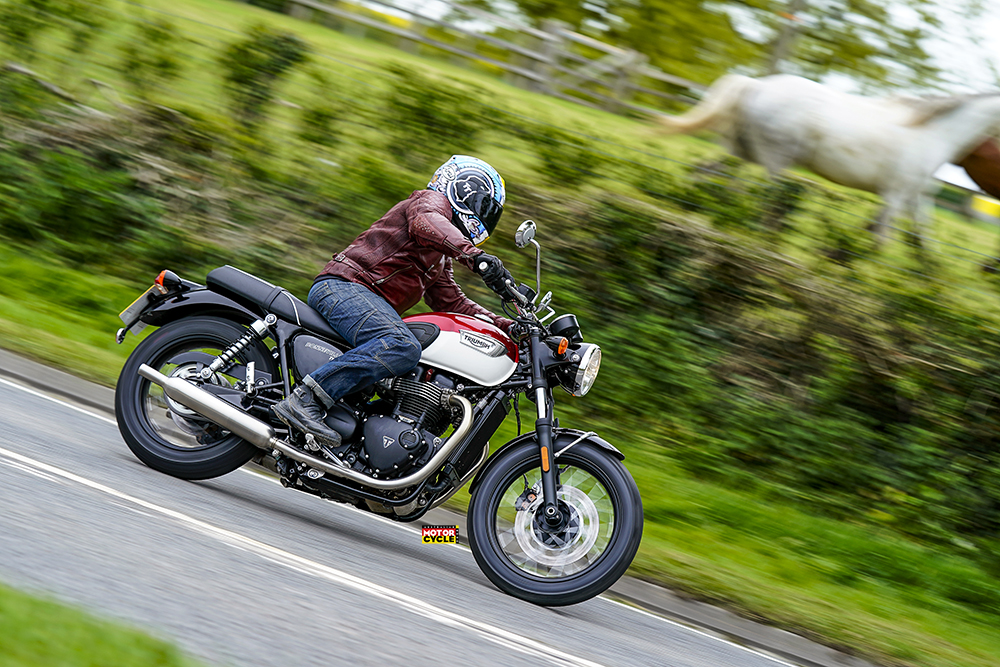 The increase in power encourages you to increase the pace from time to time and the T100 is more than happy to indulge in a spirited ride. However, as is the case with most retro bikes of this breed, quick direction changes at speed require a fair bit of effort. There is more unsprung weight than the larger T120 (lighter wheels) and combined with that large-diameter 18-inch front wheel, the handling of the T100 could never be described as sharp. 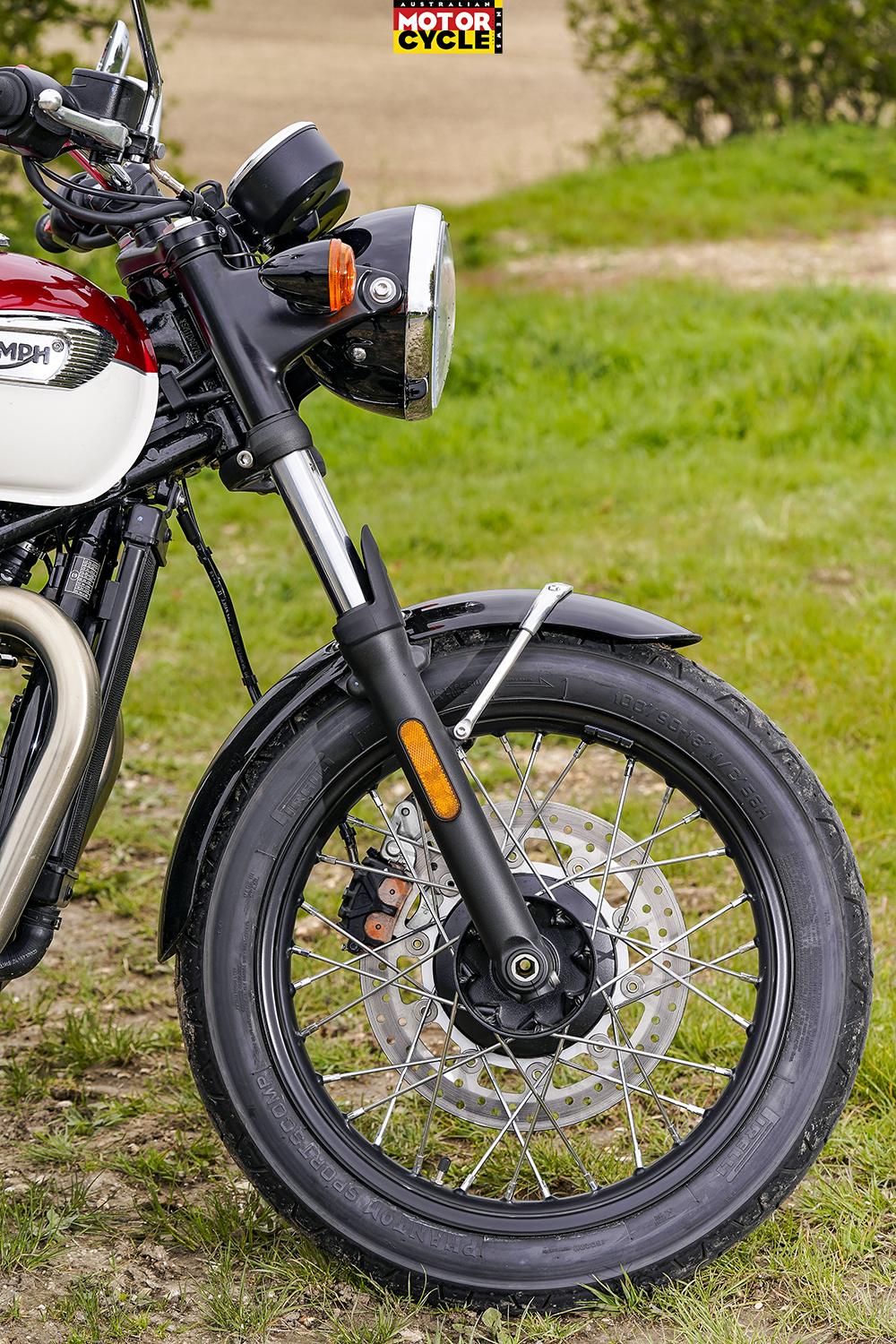 On the practicality front, the seat is wide and plush, there’s sufficient room for the pillion, and I had no complaints comfort-wise. The clocks retain an ornate look but are informative and easy to navigate, and simple like the switchgear. There is no IMU, no lean-sensitive rider aids, and not even rider modes, just standard TC which can be turned off and old-fashioned standard ABS. There is an argument that TC isn’t even needed on a bike with such progressive rider-friendly power but the counterargument is that the T100 is aimed at new and inexperienced riders who could benefit from an electronic safety net. 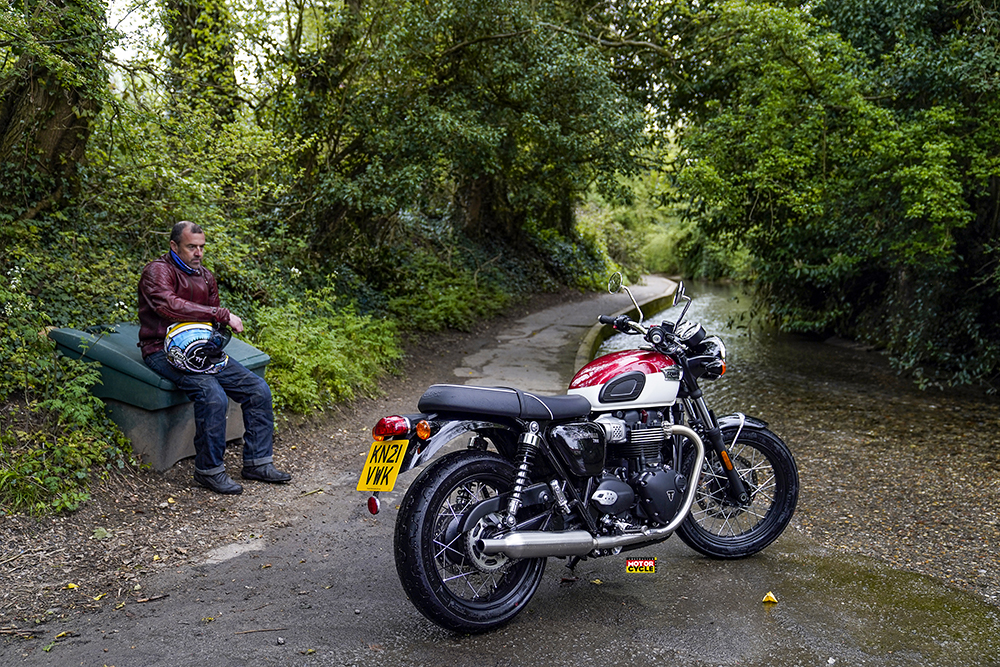 Overall, I like the looks, the image and the styling, but I’d like a little more soul and character from the T100’s engine and exhaust. And while it is pricier than the competition, it’s a lovely, simple bike to own and appreciate.

For 2021, Triumph has made a significant step forward. The engine and handling limitations have been eased and, while it is still usable and friendly for inexperienced riders, that ‘entry level’ tag is less obvious. It’s so good, it almost questions why you would want the larger T120. 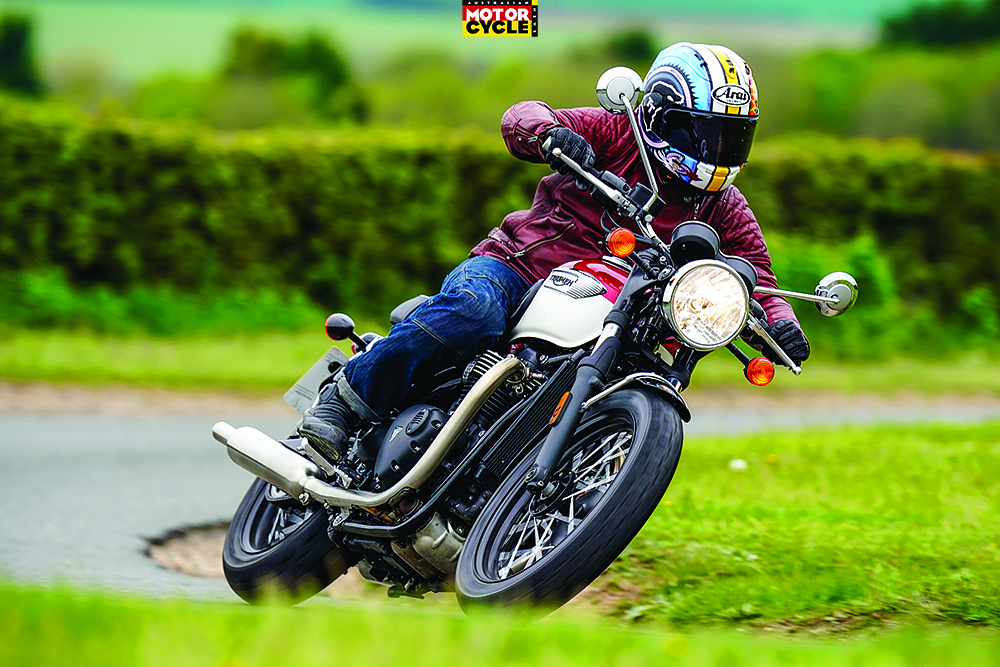 For more information about the 2021 Triumph range, head to the website here